When it comes to buzz cuts the options are seemingly endless. While it may seem like a simple cut, it can be hard trying to work out exactly what style you should go with. This includes deciding just how short you want your hair to be.

Of course, you can always add a fade to the sides too, or if you’re feeling a bit bold, perhaps some shaved in lines. The buzz cut is one of the easiest looks for any man to acquire, yet it still offers a lot of personalization.

One of the most popular or classic styles stems from the military version. You’ll find the authoritative look among the Marine Corps and Army alike. Yet, this cut has still found its way into everything from politics to rock and roll, hip hop culture, and more.

While the military buzz cut remains popular, there are many other styles out there. Let’s take a look at the benefits of getting a buzz cut style.

Why get a buzz cut?

If you have super oily hair and can’t stand it anymore, here’s your answer. With a buzz cut you can literally say goodbye to most of your hair care grooming needs. Sure, your bathroom might feel a bit light without the gels, pomades, and creams, but your wallet will definitely feel heavier over time with all the cash you’re saving.

Not to mention, you’ll find yourself making fewer trips to the barbershops. You might even end up wanting to buy your own electric razor to cut your hair at home.

Another thing to consider is how this haircut looks regardless of the weather or time of year. I’ll give you a clue, perfect. The wind and the rain are the least of your worries with short hair. Even if you have a beard, long or short, the buzz cut will more than often make it stand out in a good way.

It’s also great if you have a receding hairline as it’s the best way to style it. It also works with many different types of face shapes. For those with wavy hair or curly hair, you don’t need to spend all day worried about whether or not your hair is still in place.

What is the best buzz cut style?

So, you think you want a buzz cut haircut? The next thing you need to do is choose your buzz cut hairstyle. That’s where we can help. We’ve looked at the best styles so you can choose the one that most suits you. You’ll find everything from almost razor thin to thicker on top, and much more. So read on to find your perfect buzzed haircut.

The induction cut, known also as the military buzz cut, is one of the most popular men’s hairstyles. This is a short buzz cut where you’ll have next to no hair and it’s a small step on from having a shaved head. One of the best things about the induction buzz cut is that you can get straight out of bed and not even look in a mirror. It’s the easiest way to rock men’s hair. 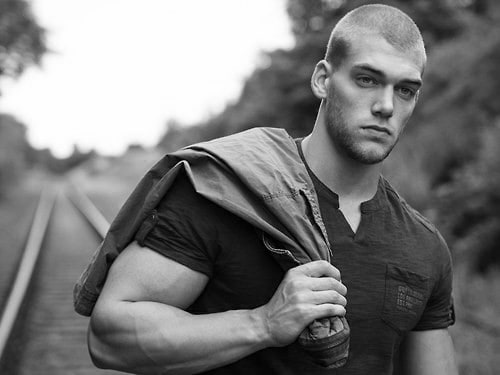 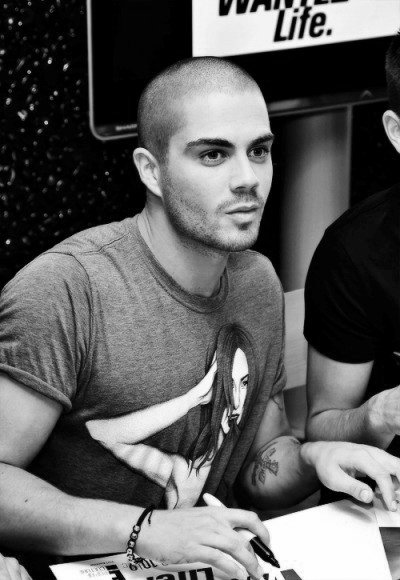 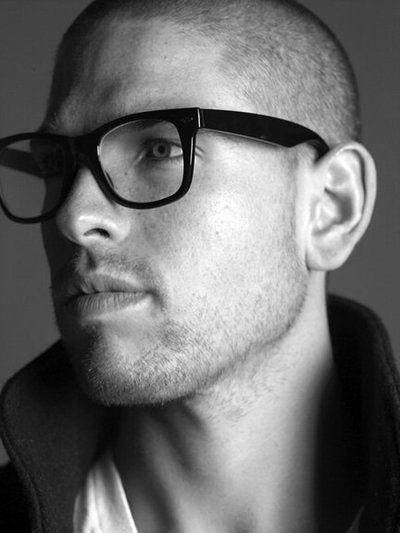 While it’s easy to maintain a buzz cut on a daily basis, it takes regular cutting. In order to keep the very short hairstyle, you’ll need to cut it every few weeks. Due to the hair length, this cut won’t take long and it’s pretty easy to do yourself in a mirror. 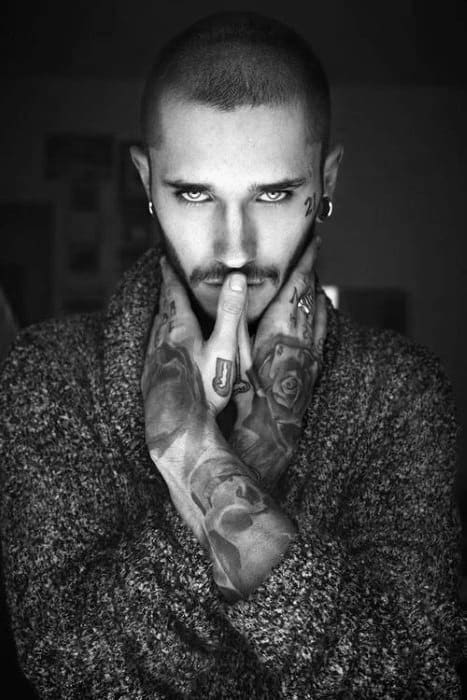 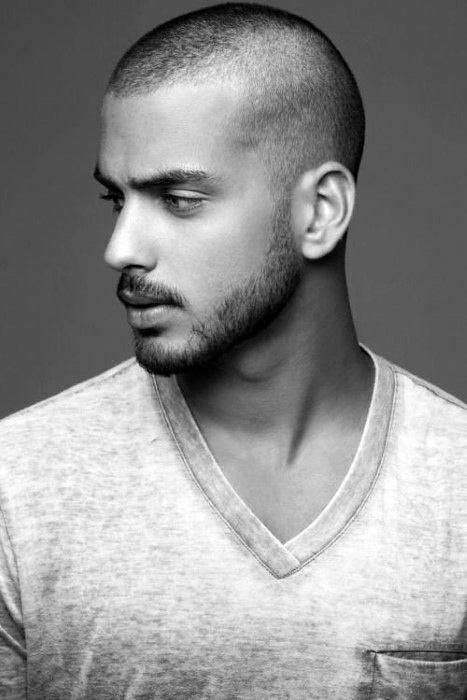 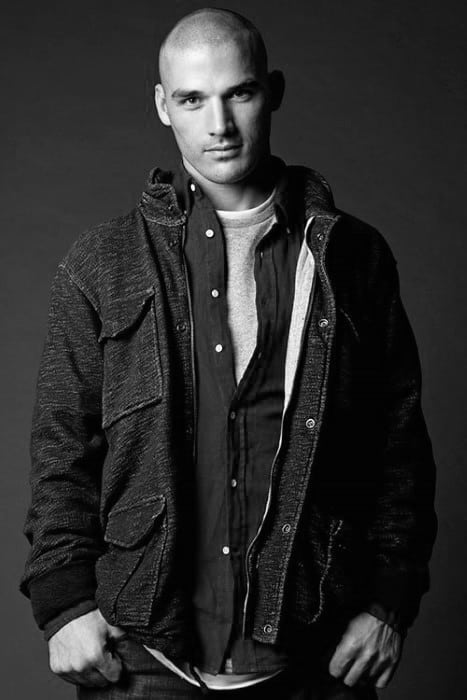 Think that the induction buzz cut is a little short? If so, then you can opt for the burr cut. This is where your buzz cut length will be a little longer, usually a #2 on the clippers. It’s perfect for those who want a little extra hair length from their buzz cut. 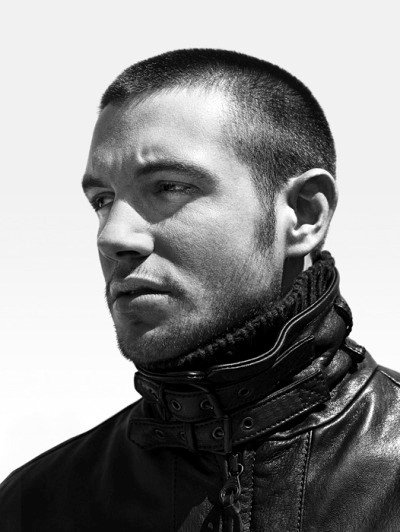 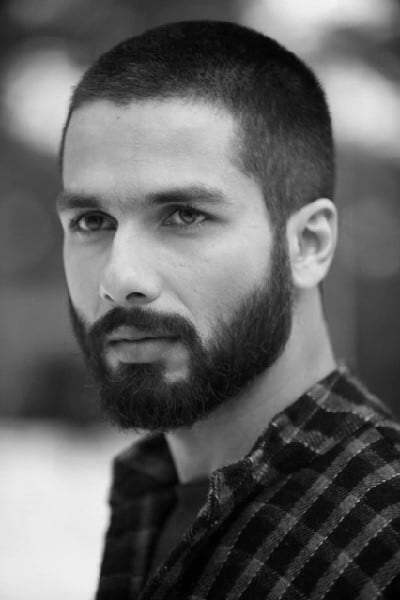 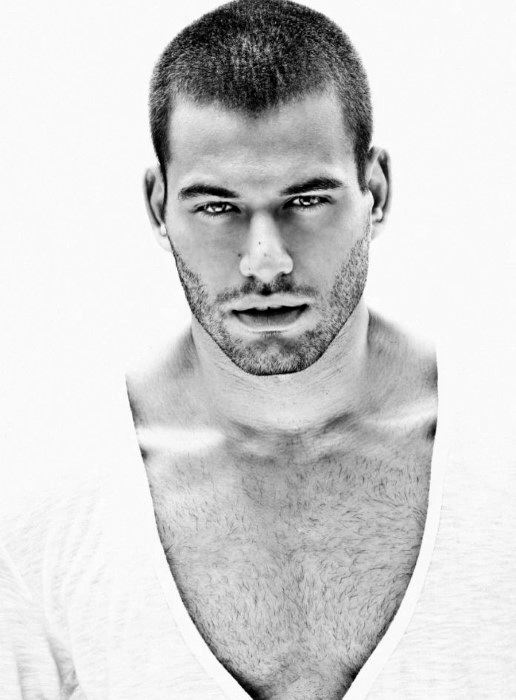 It’s also ideal for those who may be worried about either the shape or pigmentation of their scalp. That little bit of extra hair can hide anything you may be self-conscious about. It requires a similar amount of maintenance to the induction buzzcut but you can go a littler longer between trims. 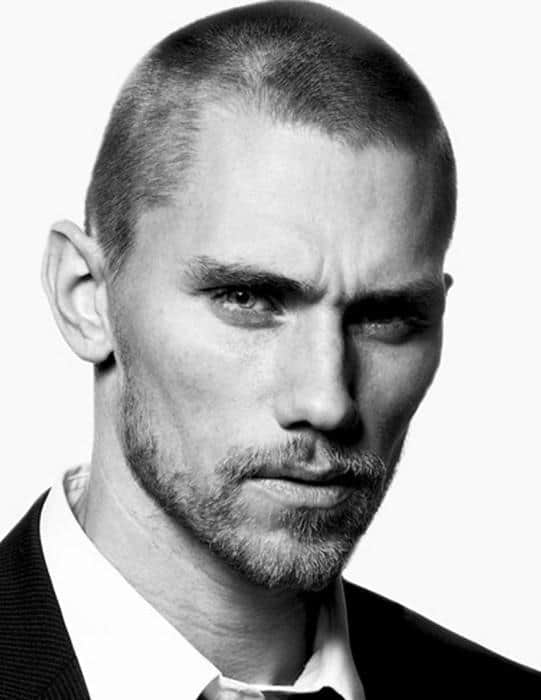 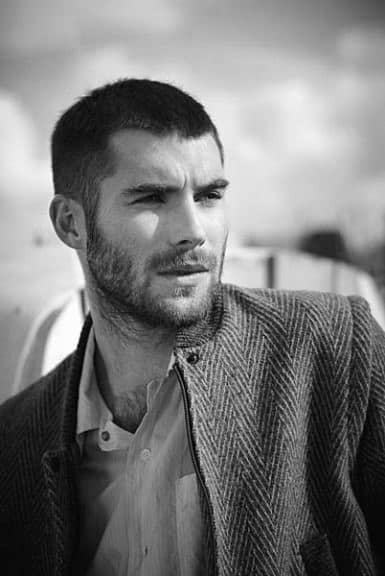 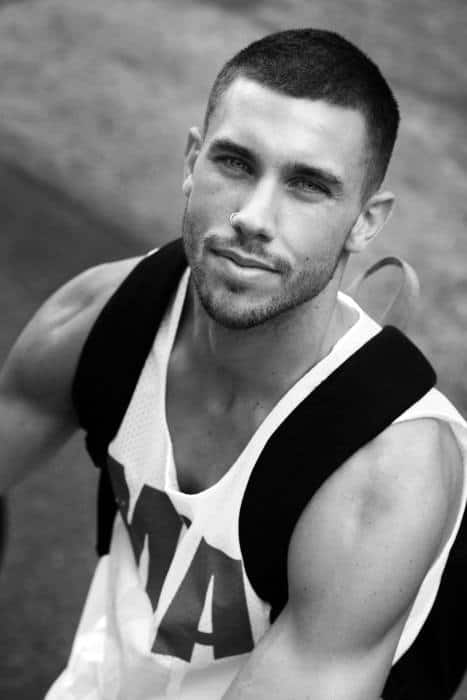 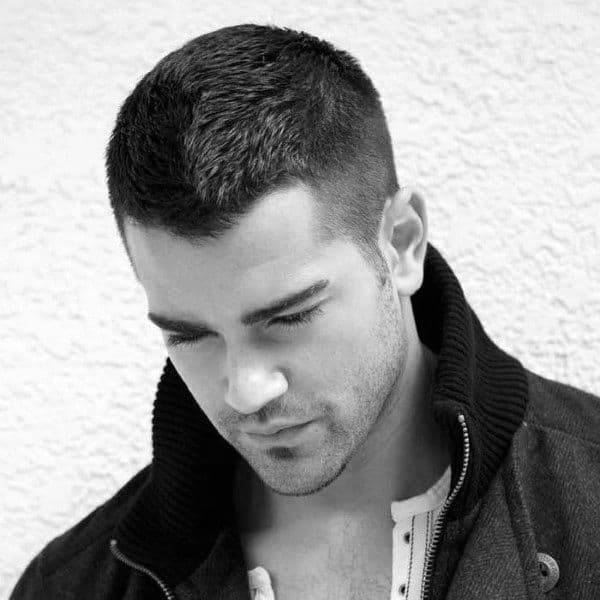 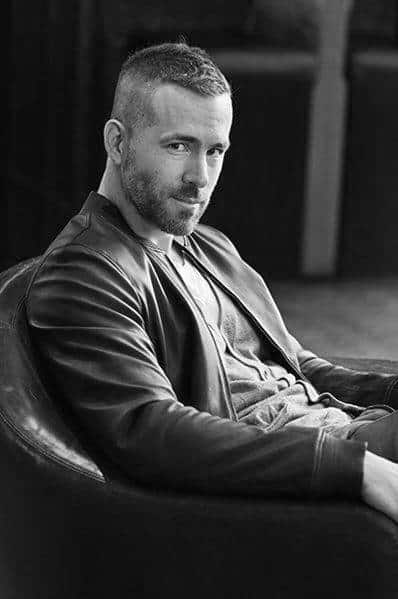 There is usually a taper fade to it and is extremely popular as it suits almost all men. In order for it to stay sharp, you’ll need regular trips to the barber and it’s a hard style to master yourself. 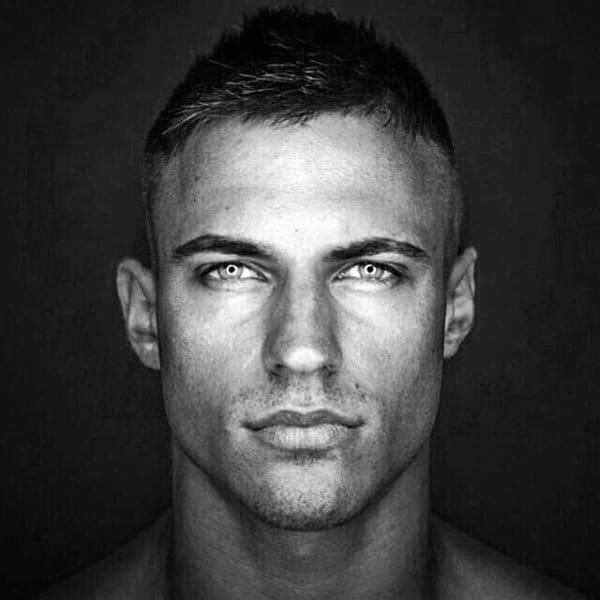 If you wanted faded sides then another great choice would be the faded buzz cut. Similar to the crew cut, this is usually a more subtle and longer skin fade that leads to hair on the top, which is still quite short. 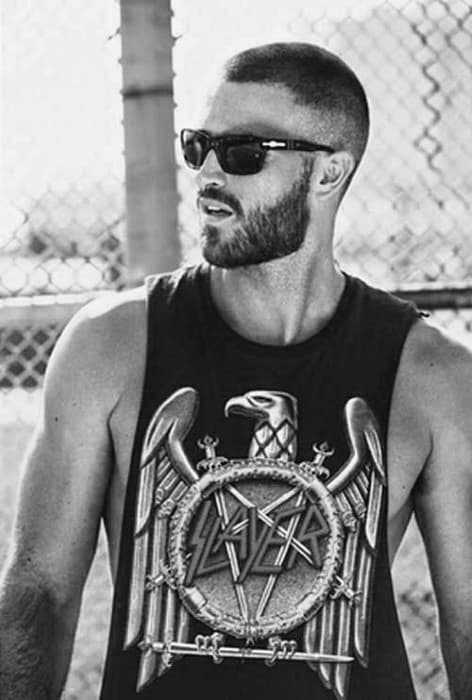 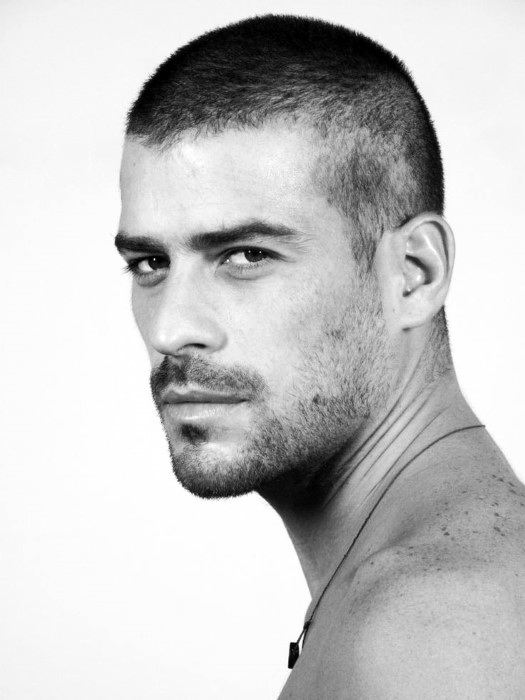 The faded buzz is a very masculine haircut and another which has huge popularity. The buzz cut fade looks equally great with a clean-shaven face or a bushy beard. As with the other types we’ve looked at, the fade haircut will need cutting every few weeks to stay sharp. 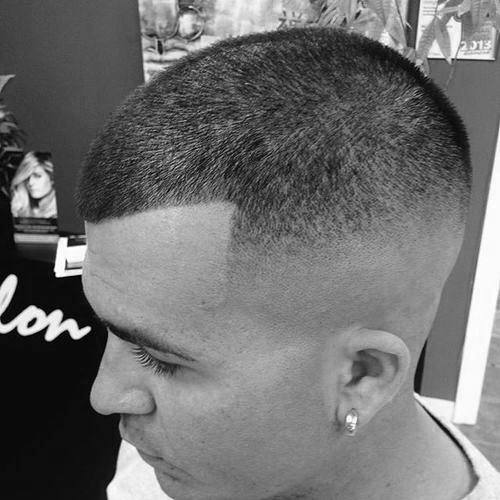 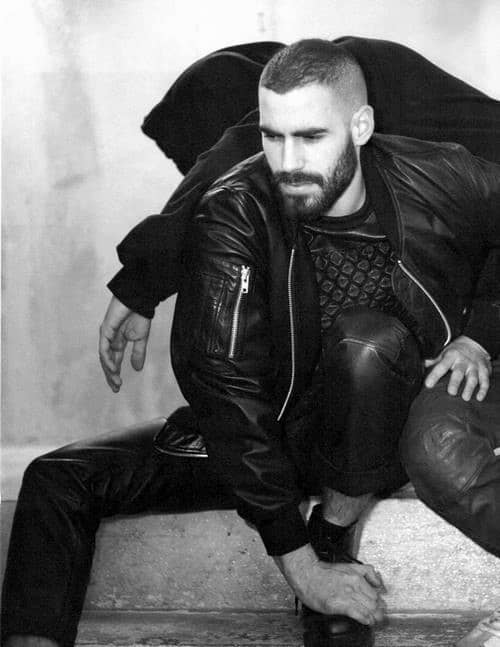 If you wanted something a little more laid back then the brush cut, also known as the butch cut, is the way to go. This is where the buzz cut length is a little longer with usually a #3 on the clippers or perhaps even a #4. It’s less sharp but easier to maintain. 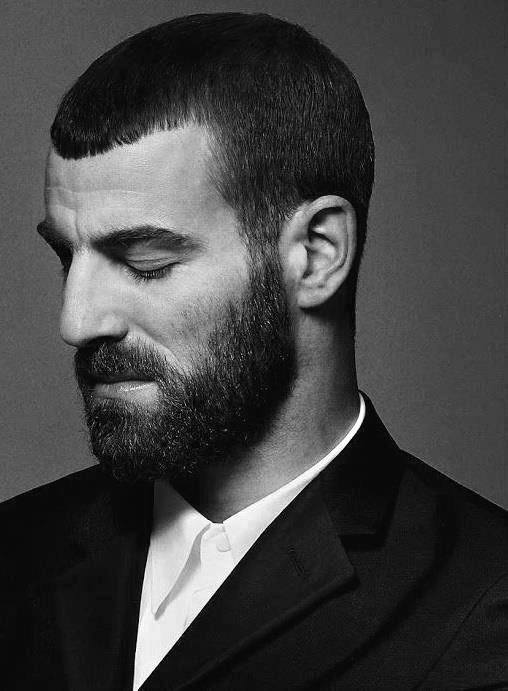 If you were to leave an induction cut, it’d eventually take the appearance of a brush cut. It doesn’t need cutting very often and looks great on those with a more rounded face shape. It’s also probably the easiest buzz cut that you can do yourself. 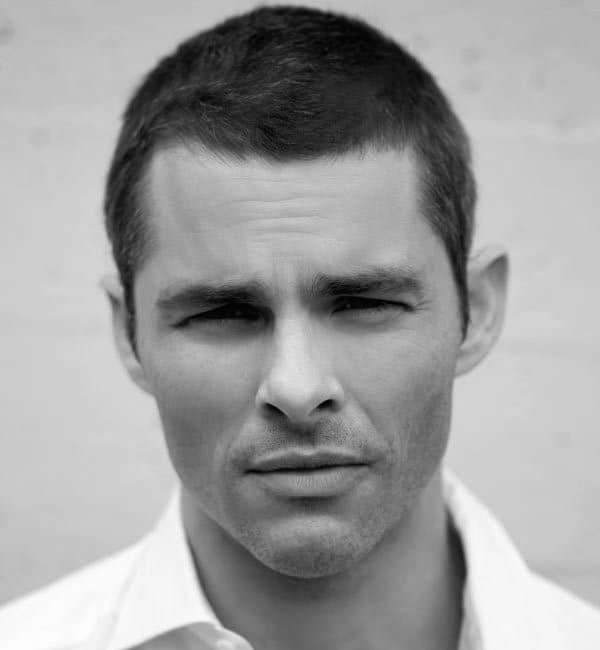 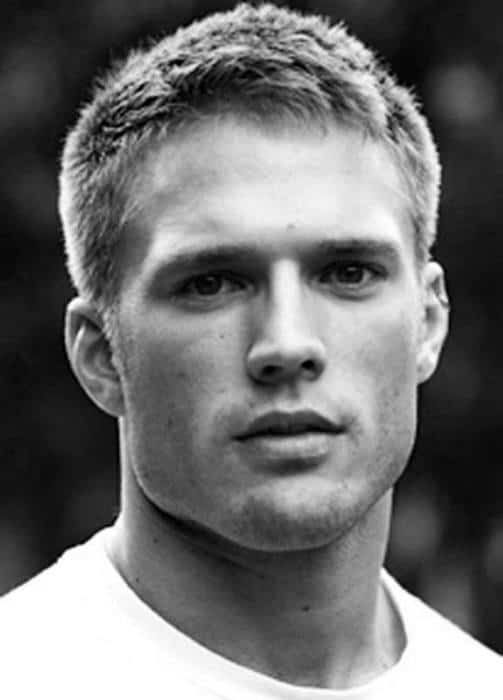 The Caesar buzz cut is essentially a fade buzz cut but one where you have long hair at the front which you’ll then style into a fringe. It works well for those with straight hair but it can work if you have a different hair type. 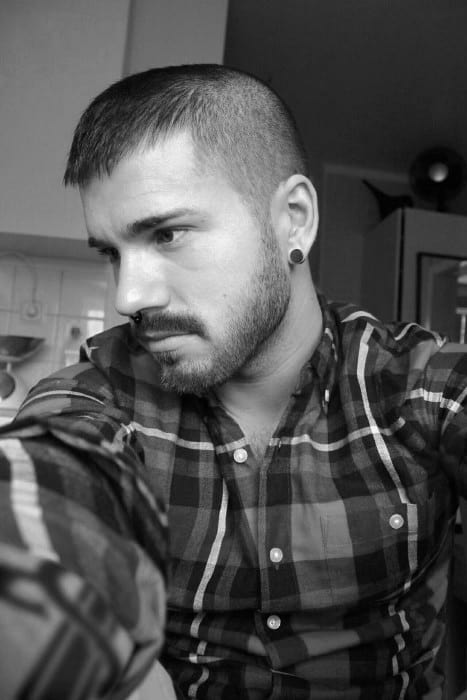 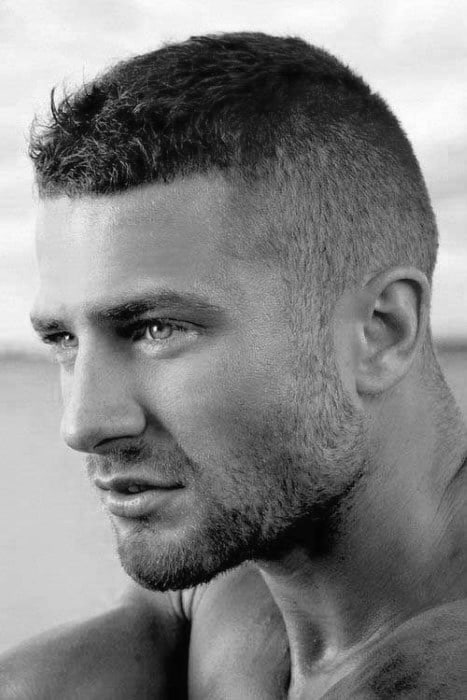 The longer hair on the top gives you a chance to add some product to your hair, which is rarely the case with a buzz cut. This long buzz cut is perfect for those who want to add a bit more personality to their hair style. 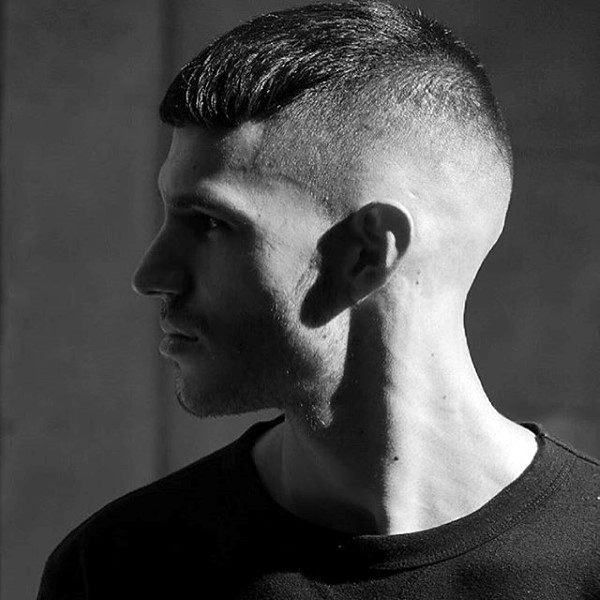 There is no doubt that the buzz cut with facial hair can look fantastic. It’s time for you to ditch the beard trimmer and embrace your manliness. As our examples show, it can give you a very striking look that is bound to turn heads. 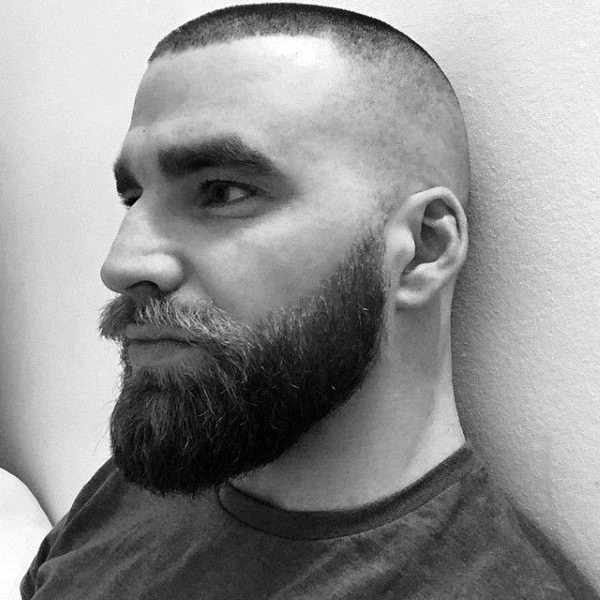 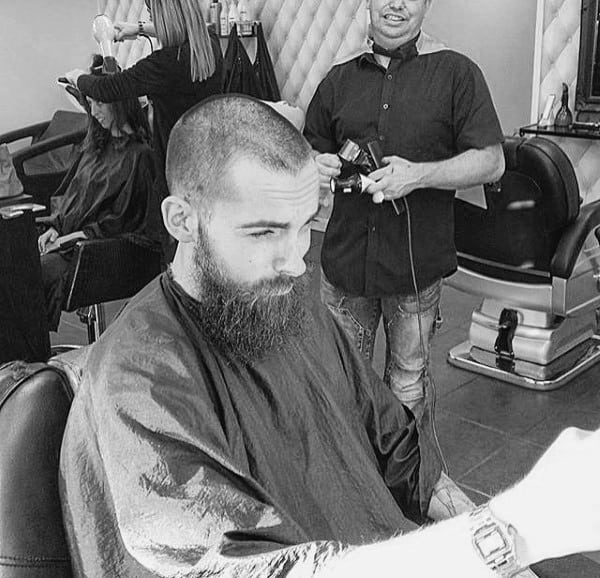 It also works with many different types of beards whether you wanted to style it with some stubble or go all the way to a big bushy beard. If you already have a beard and wanted to know if a buzz hairstyle would suit it, you already have your answer. 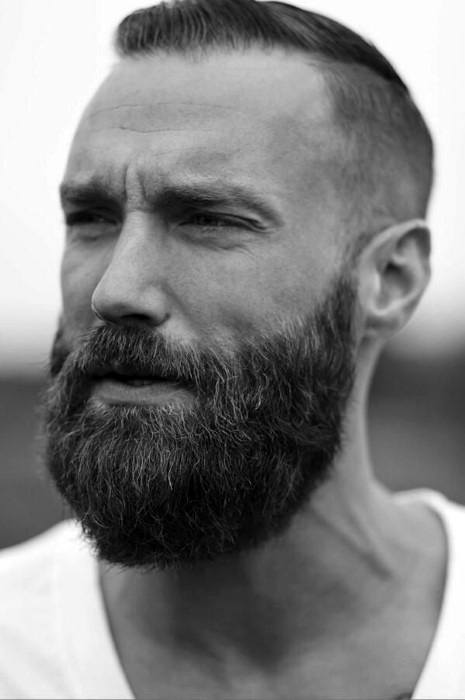 If you wanted a more daring buzz haircut then you can opt for one which has lines running through it. This adds a little more personality to your buzzed hair and you can ask your barber for any type of shape or style you want. 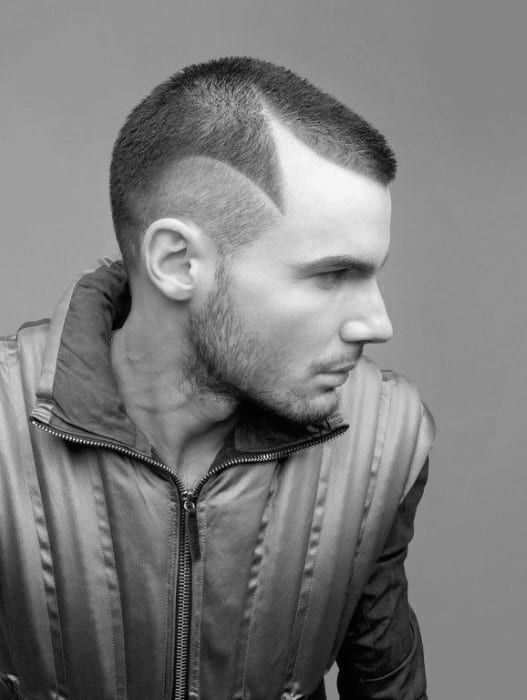 These lines can be quite high maintenance as they grow out fairly quickly. You either need regular cutting or another buzz cut to get rid of them. If you want to make a statement, then those lines are definitely worth it.

The most daring type of buzz cut is arguably the Mohawk. This is where you’ll have the hair clippers on #1 on most of your head except for one strip down the middle. The strip of longer hair can be any length you want. 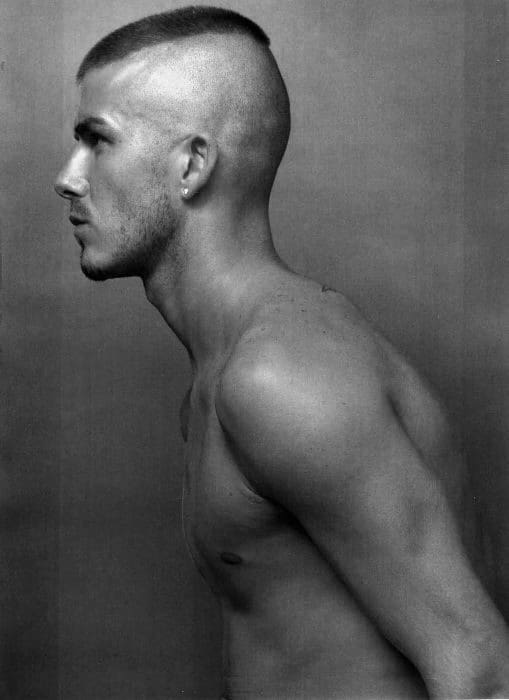 If you want to keep maintenance low, then you’ll want to keep your Mohawk quite short but a longer one can be stunning. If you don’t like it, then you can always change it straight back to an induction buzz cut.

The buzz cut is one of the most popular haircuts for men and it’s easy to see why. They look fantastic and suit many different types of face shapes. They are also versatile too as a buzz cut can look professional and still feeling casual. It’s hard to go wrong with a buzz cut.

Which buzz cut is the best?

The traditional buzz cut is to simply go for an induction cut and have that short hair all over your head. If you think that may be a little too short then you can opt for one of the other stylish cuts. The answer to this question is ultimately up to you and whatever you feel most confident with. We think all the ones we’ve looked at here are great.

Is a buzz cut unprofessional?

Absolutely not. If you walked into any office then you’re likely to see numerous men with a buzz cut. It is considered a professional haircut and one that is to be respected. Having a buzz cut while wearing a suit is always a smart and masculine look.