Shift Into Luxury With The 2014 Rolls-Royce Wraith

The legendary Rolls-Royce has come up with another car worthy of all the classics that have preceded it. The 2014 Wraith is opulent and excessive. It was built without any regard for the environment, and, or course, your bank account. However, that does not take away from the masterpiece of engineering that the Wraith is. 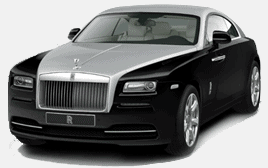 When you first look at the Wraith from the front, the car looks similar to other recent Rolls-Royce offerings. A relatively simple facade, rectangular headlights, a large retangular grille and a tall, upright nose. If you move to the side, things start to get interesting.

You are greeted by a neatly sculpted tail, smooth slab sides and a gently sloped fastback profile. It nearly gives the appearance of being sporty and compact, until you begin to comprehend the scale of the car: the Wraith is 17′ 3” long, 4′ 11” tall and it weighs in at a whopping 5,203 pounds.

The Wraith is powered by a 6.6-liter twin turbo V-12 engine that can generate a hefty 624 horsepower. This engine is powerful enough to propel those 5,203 pounds of car up to 60 mph in only 4.4 seconds, according to estimates provided by Rolls-Royce. However, the top speed of the 2014 Rolls-Royce Wraith is electronically restricted to a top speed of up to 155 mph.

The on-road capabilities of the Wraith are further enhanced by an innovative Satellite Aided Transmission. It utilizes information provided by a satellite to scan the road. It combines this information with data about the terrain to pre-select the ideal gear for you to drive in. Rolls-Royce claims that this feature will make sharp turns, descents and climbs much smoother. The transmission is a ZF-sourced eight-speed automatic.

The smooth ride that people have come to expect is present in the 2014 Wraith, due to an air suspension that is electronically-controlled. Seating is arranged in four individual positions with as much comfort as you could ever hope to find in an automobile.

The cabin is chock full of the finest materials you will find anywhere. Machined metal trim elements, finely crafted woods and leathers that are soft and rich are found throughout the front and rear of the cabin. A unique fiber-optic system that looks like a starry night sky is available for the roof. If there is a feature that you want that is not included in the factory version of the Wraith, you can place an order to have it installed.

Rolls-Royce has not disclosed the gas mileage of the new 2014 Wraith. However, logic would dictate that if you can afford the $300,000 asking price of this car, you are not too worried about the price of gas that it will take to operate it. Besides, there is no such thing as a fuel-efficient V-12 engine. If you are looking for a “green” vehicle, this is not it.

The Wraith has not been safety tested as of yet. However, the sheer size of the car will be in its favor if it is involved in an accident. Rolls-Royce has a reputation for solid construction. Standard safety features include smart airbags that conform to the size of the person, force-limiting seat belts and the Advance Crash Management System.