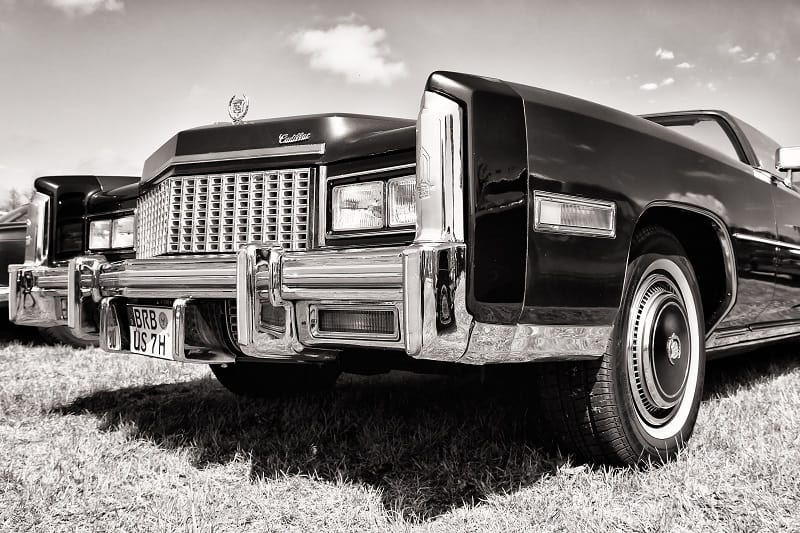 Arguably some of the greatest cars to ever exist have been American-made despite what some car enthusiasts believe. Over the decades, American manufacturers and assembly warehouses have created powerful muscle cars, reliable family cars, and extraordinary sports cars.

At one time in American vehicle history, Detroit was the undisputed center for the auto industry, giving meaning to the profound phrase “made in America.” The auto industry currently has a much more comprehensive manufacturing and distribution network that has since split from Detroit, but an important fact should be acknowledged.

Without the significant influence of American-made cars, the auto industry markets and manufacturing processes in the car industry would not be in the position it is today. Many of the iconic vehicles made in America have stood the test of time and have earned their titles of being some of the greatest cars in history.

A few of the cars on this list will be easily recognizable to car fans. Yet, we have also included some lesser-known American car gems that you likely are not aware of.

As the world enters into new environmentally conscious practices, the car industry is no different. We have included a model that began the vehicle revolution and a model that is allowing America to stay ahead of the technological and environmental game. 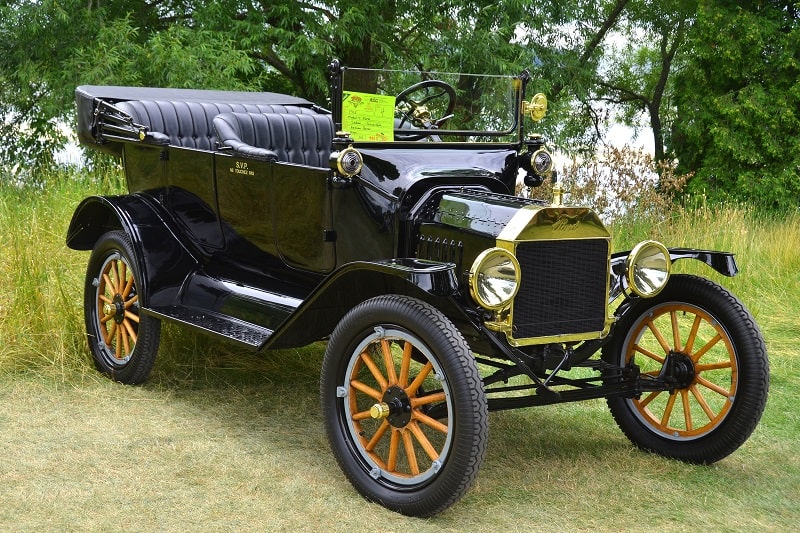 Arguably the title for the greatest car made in America belongs to the 1908 Ford Model T. This vehicle was one of the first mass-produced cars in the world, which allowed automobile manufacturing company Ford to achieve its lofty aim of manufacturing the universal car.

Interestingly by the 1920s, more than half of all the registered cars on the road globally were Ford vehicles. More than 15,000,000 Model T’s were built and sold, with the car’s production ending in 1927.

It’s indisputable that this American-made vehicle was revolutionary, but its specifications and unique design features helped it achieve this status. The 1908 Ford Model T was the very first car to have a steering wheel placed on the left-hand side, creating more space for passengers.

Unlike other vehicles of its time, the 1908 Ford Model T came with a tool kit, had the option of having a windshield, and it had a packed gas tank under the front passenger seat. Moreover, this car had to be cranked to start the engine before a person could drive it. 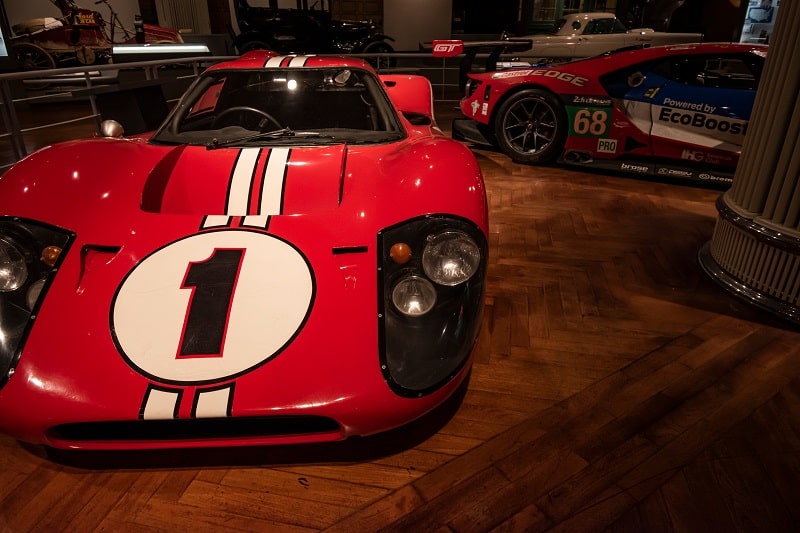 One of the best American-made race cars of all time is the 1967 Ford Mark IV. To date, this model is the first and only all-American-built race car to have won the 24 Hours of Le Man’s event. The 1967 Ford Mark IV was designed by Ford engineers and has remained a source of national pride. Essentially this model represented the true power of American engineering.

The 1967 Ford Mark IV was designed for endurance racing. It had a large 7-liter Ford V8 engine that was capable of producing 500 horsepower, which was incredible for the time. With engine specs like these, it’s unsurprising the Ford Mark IV could reach speeds of more than 200 mph.

Interestingly, this model had a record-breaking average speed of 135.8 mph which is likely why it was able to beat the Ferrari it was up against at the 1967 24 Hours of Le Man’s event.

Additionally, the chassis was made of honeycomb aluminum, and the car underwent extensive wind tunnel tests. As a result of this testing, the 1967 Ford mark IV had near-perfect aerodynamics. 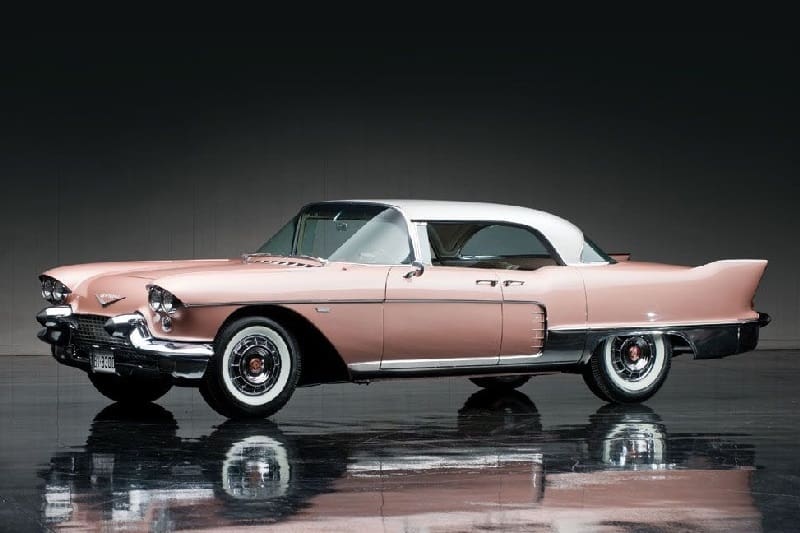 One of the most expensive American-made luxury cars of the 1950s was the 1957 Cadillac Eldorado Brougham. This model was meticulously hand-built with a host of luxury features that put its price above that of the Rolls Royce models of the time. According to numerous reports, there were only ever 400 Cadillac Eldorado Broughams ever created, making them one of the absolute rarest and most sought-after cars.

Although these features are impressive, the engine on the 1957 Cadillac Eldorado Brougham is also worth mentioning. This model had a 3.6-liter V8 engine with a four-speed GM Hydra-Matic transmission. It had a 10:1 compression ratio and was capable of producing up to 325 horsepower. 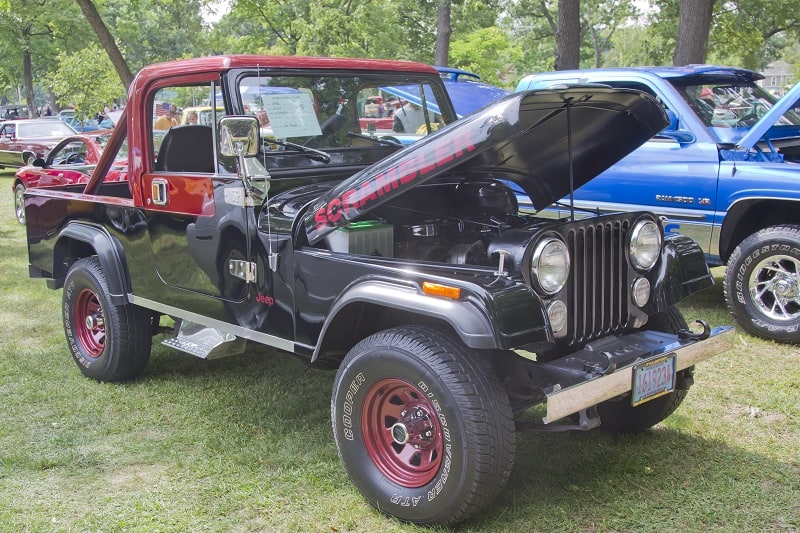 Arguably the best Jeep model ever manufactured was the 1981 Jeep CJ-8 Scrambler. This vehicle had a unique pickup truck body shape that has made it incredibly popular amongst new generations of adventurers. Although it wasn’t that popular in the 80s, it was a favorite car of a former American president.

The original 1981 Jeep CJ-8 Scramblers had a 5 foot long cargo bed and were equipped with a doorstep, hood locks, a windshield hinge, and a battering ram bumper. In recent years the Scramblers have become a hot commodity. This model is especially popular amongst those who are fans of the reliability and versatility Jeeps offer and for those who don’t want a full-size pickup truck.

Many believe the 1981 Jeep-CJ-8 Scrambler to be the greatest Jeep manufactured because of its improved wheelbase, stability, and on-road handling ability. The base model Scrambler was equipped with a 150 cubic inch four-cylinder engine that could pump out 82 horsepower and 125 pounds per foot of torque.

Additionally, the 1981 models were equipped with a four-speed manual transmission and had a top speed of 75 mph. Most people who purchased the original model made upgrades to the engine to increase the vehicle’s power. 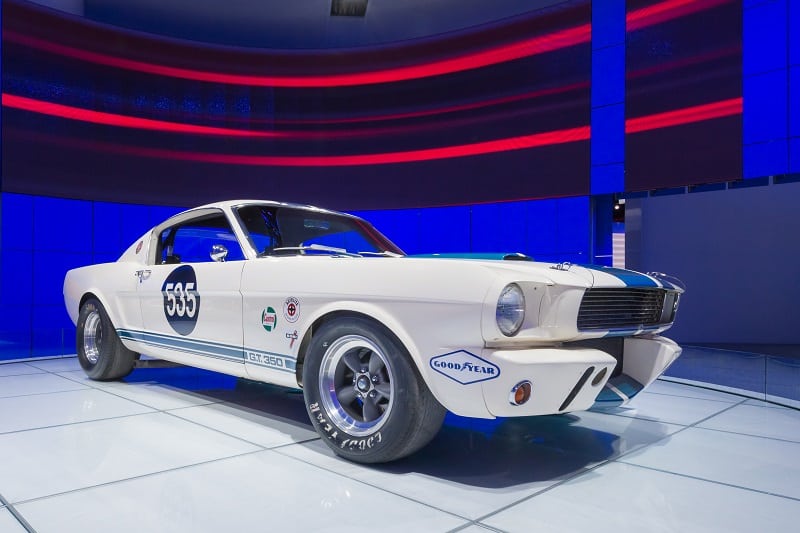 One of the most iconic and extraordinary American muscle cars is the 1965 Ford Shelby Mustang GT350. This influential car has managed to carve out a spot in history because of its innovative design, beautiful appearance, and superior engine capabilities.

In 1965 Ford sent a few of their original Mustangs that were based on the 1960 Ford Falcon platform to the famed Caroll Shelby. Upon receiving the Mustangs, Shelby and his team got to work improving on the Mustang’s power and performance capabilities. The improvements they made elevated the original Mustangs to something greater, and they became known as the 1965 Shelby Mustang GT350’s.

Only 562 of the 1965 Shelby Mustang GT350 models were ever produced. These cars were equipped with Ford’s HiPo K-code 2.8 liter V8 engines that we’re able to produce 306 horsepower and 6,000 rpms. The models could also create a torque of 329 pounds per foot and had a fully aluminum BorgWarner T10M 4 speed manual gearbox. 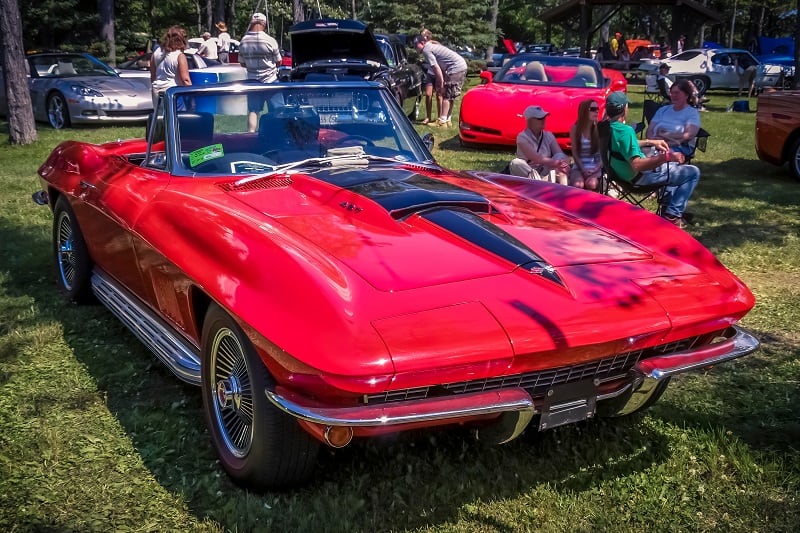 The rarest American-made car on our list is the 1967 Chevrolet Corvette L88. There were only ever 20 units of this model ever produced. One of the last models to have its original engine went on auction in 2019 for an astounding $3.95 million. Because of this rarity and the vehicle’s excellent performance features, it’s on most car collectors’ “must-have” lists.

The Corvette is well known as America’s sports car, but Chevrolet explicitly designed the 1967 L88 to be an internationally competitive racing car. It’s believed the L88 had a horsepower capability of well over 500, with the race models being closer to 600 horsepower.

The engine in the 1967 Corvette L88 was equipped with a 12.5:1 compression, an aluminum intake, a transistor ignition, forged connecting rods and aluminum pistons, and an aluminum crossflow radiator. These features allowed these models to be incredibly powerful and memorable.

It’s important to note that although the performance features were awe-inspiring, these models lacked many creature comforts. There was no radio, defroster, heater, or air conditioner. Yet, the lack of these features made it one of the best American racing cars of the 1960s. 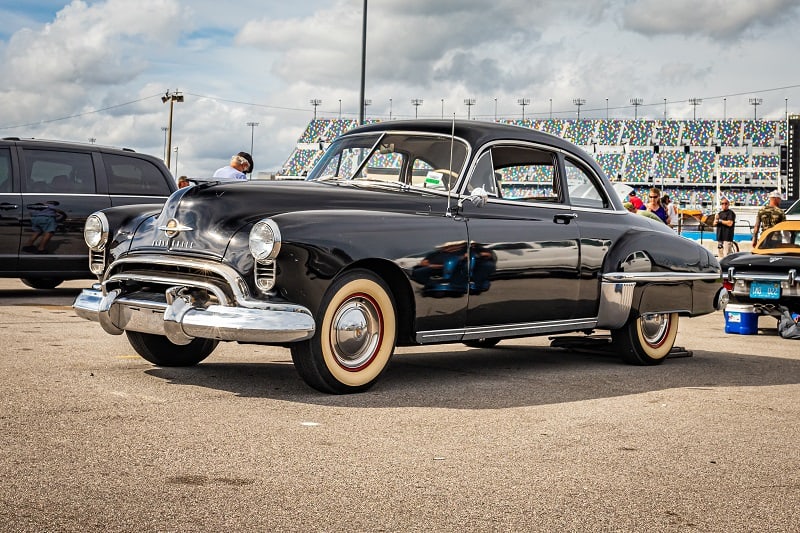 It is commonly believed that the 1949 Oldsmobile “Rocket” 88 was America’s first-ever muscle car. Incredibly the “Rocket” 88 models were produced from 1949 through to 1999, making them one of the longest-running vehicle lines in production in American history.

Even though this model is fondly believed to be the first American muscle car, it didn’t have the appearance of one. However, this doesn’t mean it was distastefully designed. These “Rocket” 88 models had a modest shape, yet they were streamlined. Interestingly, these models were only 202 inches long and 75 inches wide.

The distinctive design and nostalgic charm have managed to keep this model in the hearts of many classic muscle car enthusiasts. For the time, the 1949 Oldsmobile “Rocket” 88 had impressive engine specifications. These models were equipped with 303 cubic inch V8 engines that we’re able to produce a horsepower rating of 135 and a torque rating of 285 pounds per foot. 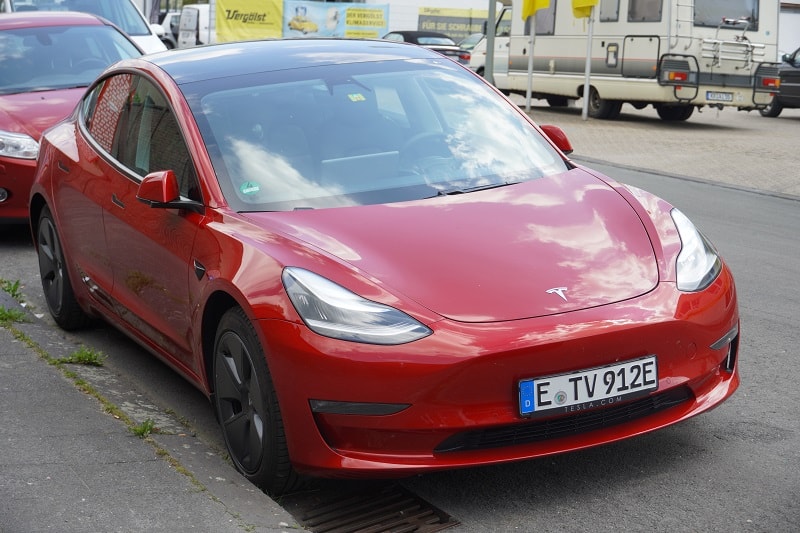 It might not be believable, but one of the newer American-made electric cars is one of the greatest vehicles to be made in recent years. Usually, electric cars have a reputation for having sub-par looks, performance, and agility, yet Tesla’s Model S is truly an exception.

The 2012 Tesla Model S has an exquisite design a spacious interior and produces zero tailpipe emissions. This model was the first mass-produced electric car from a Silicon Valley start-up. Unlike vehicles that run on gas or fuel, the Tesla Model S has a battery pack with 7000 cylindrically shaped lithium-ion cells. Incredibly this battery weighs more than 1,300 pounds, but it lasts you more than 100 miles per charge.

Astonishingly the 2012 Tesla Model S has liquid cooling for its electrical components. This means that it can thermally condition or control the temperatures of its electrical components. This convenient feature allows for better energy retention and more stable performance. Additionally, the Model S’s can reach 0 to 60 miles in less than five seconds and produce a horsepower rating of 416. 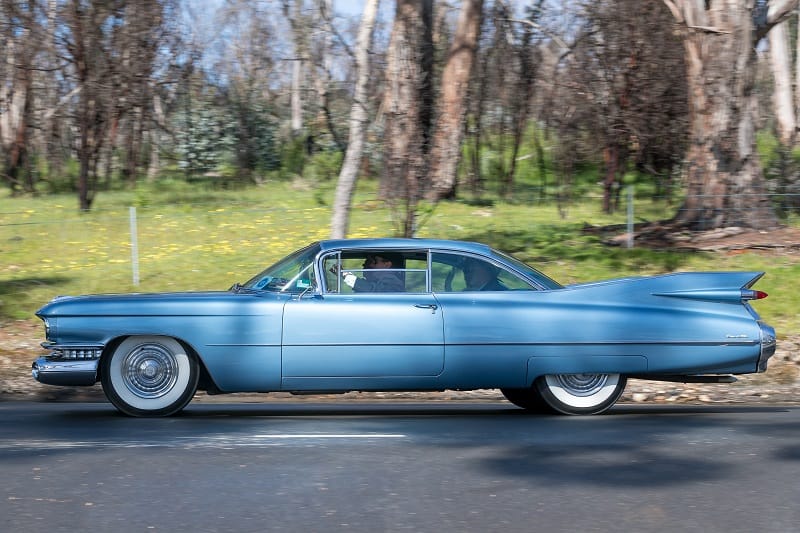 The 1959 Cadillac Coupe DeVille was made iconic by the late rock and roll musician Elvis Presley. During the 50s, there was a love-hate relationship present with this vehicle. Some loved the polarizing design, while others thought it tacky and too unconventional. Despite these differing views, the 1959 Cadillac Coupe DeVille has still managed to become a collector’s dream car.

For many, the 1959 Cadillac Coupe DeVille was deemed ostentatious, opulent, and outrageous, yet it can’t be denied that the design was interesting and thought-provoking. The fins at the back of the models were the biggest the industry had seen and are a distinct design feature that had people noticing you.

This model had a 6.4-liter V8 engine made for cruising down long and windy roads and not for racing. It had a four-speed Hydra-Matic transmission and a suspension system with a single live axle. Additionally, the 1959 Cadillac Coupe DeVille had a heavy power-assisted all drum braking system. Moreover, it was on the slower side but still able to go from 0 to 62 mph in roughly 12 seconds. 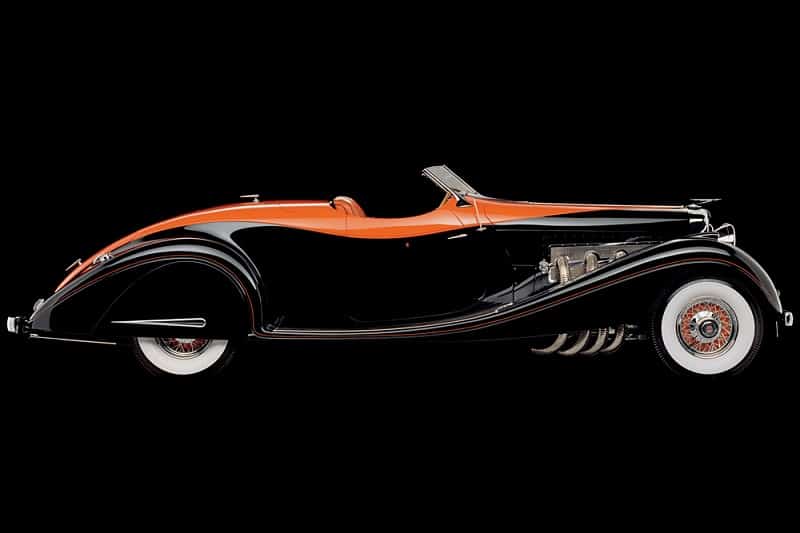 The straight-eight engine equipped in these models was decades ahead of its time and lent to the vehicle’s success. The engine featured twin overhead camshafts and had four valves per cylinder. Additionally, it was 6.8-liters and was capable of a horsepower figure of 265, which was shocking considering the models were pre-WWII.

Interestingly, there were supposed to be 500 Duesenberg Model SJ’s built, but because of the Great Depression, only a couple hundred were produced. Today the vehicle is a sought-after collector’s item, especially because Duesenberg closed down after the untimely death of Fred Duesenberg.