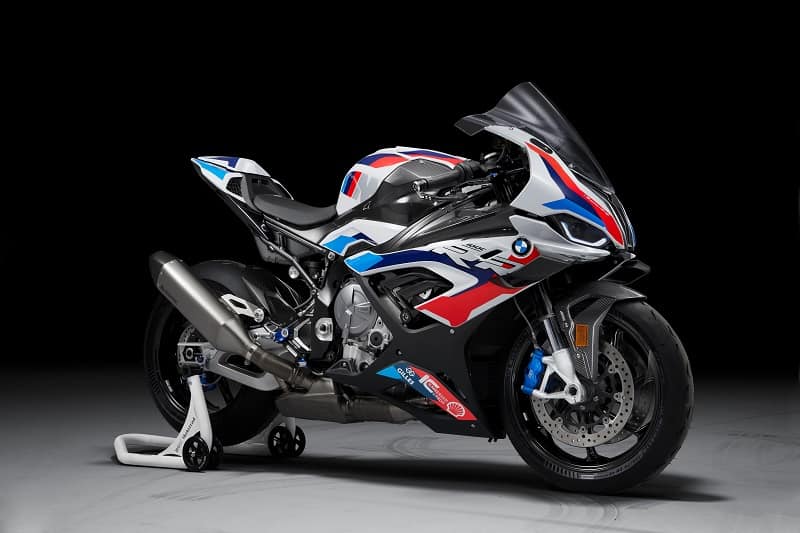 For the highest performance on the road; pure racing technology for motorsports and sexual appeal unlike anything on the road with two wheels. The new BMW M 1000 RR superbike is taking to the streets, leaner and meaner than ever before.

Taking the incredible platform of the S 1000R, this beemer takes a note from Spinal Tap and turns everything up to eleven. As the first official bike from the M sport range, this previously four-wheel exclusive range of BMW’s now enters the realm of the motorbike.

Ditching the HP moniker in favor of their favorite letter, BMW expands its performance series, having sold M performance motorbike parts since its inclusion in 2018. 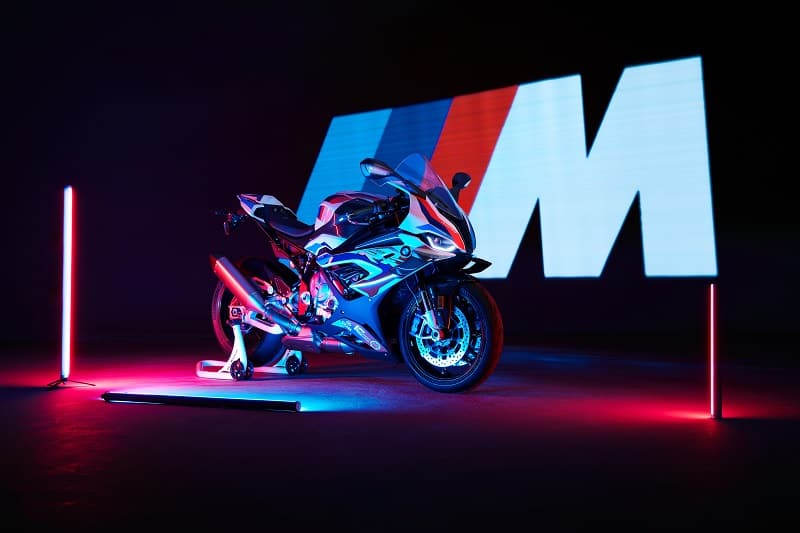 Called the RR for short, this world premiere motorbike celebrates the BMW Motorrad philosophy of the strongest letter in the world. Positioned worldwide for success in motor racing, the inaugural bike in the BMW M series, just like every car in their lineup, is aimed directly at customers “with particularly high demands relating to performance, exclusiveness and individuality.”

Delivering an engine that outputs 156 kW (212 HP), at only 192kg, the RR is quick. Coupled with suspension and aerodynamics designed for maximum race track performance, the new M RR is really quick. Meeting, and surpassing expectations of a superbike, the RR gives you more peak power and increased maximum speeds from its four-cylinder in-line engine. 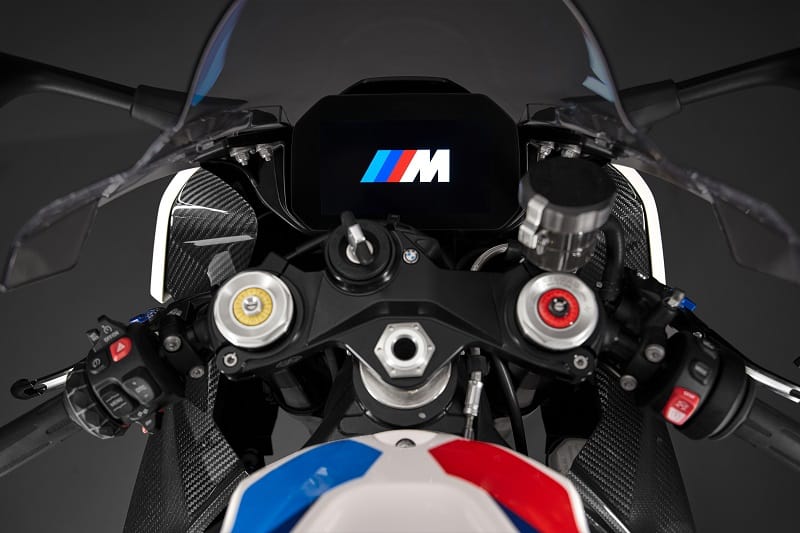 Using the RR power train with BMW ShiftCam technology, this water-cooled motor (Linus Tech Tips would be proud) gives its riders “varying valve timing and valve lift that has been modified comprehensively” for motorsports racing. Employing extensive technical optimizations such as new 2-ring forged pistons from Mahle, the RR delivers a maximum torque of 113 Nm at 11,000 rpm, and its top speed when increased to 15,100 rpm.

With an incredibly lightweight exhaust system made of titanium and a trimmed down chassis design using aluminum at the centerpiece of the bridge frame, the M RR achieves its primary objective – the best possible lap times on the race track. With an optimized upside-down fork as well as a revised central spring strut with blue spring and Full Floater Pro kinematics, the uncompromising chassis is born to race.

But for those who just want to drive it, it’s optimized for that too. Balancing wheel load distribution and using modified geometry, this bike lets you accelerate early, and brake later. 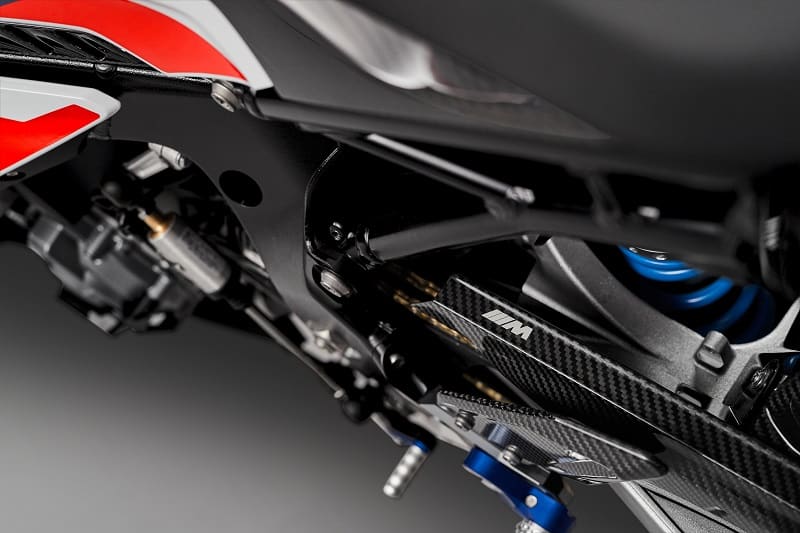 Speaking of braking, the new RR equips an M brake for the first time. What’s an M brake? For the uninitiated, just like the racing vehicles of BMW M GmbH, the M brake has been developed directly from experience earned at the Superbike World Championships.

Providing maximum stability and control, this high-tech addition gives its riders supreme performance on the race track and the road.

Tested inside the BMW Group’s wind tunnel, maximum speed is maintained thanks to decisive technical specifications of the RR’s aerodynamics. Using the downward force to “establish the best possible contact of the wheels with the road – especially when accelerating,” the clear-coat carbon made M winglets add additional wheel loads according to the speed. 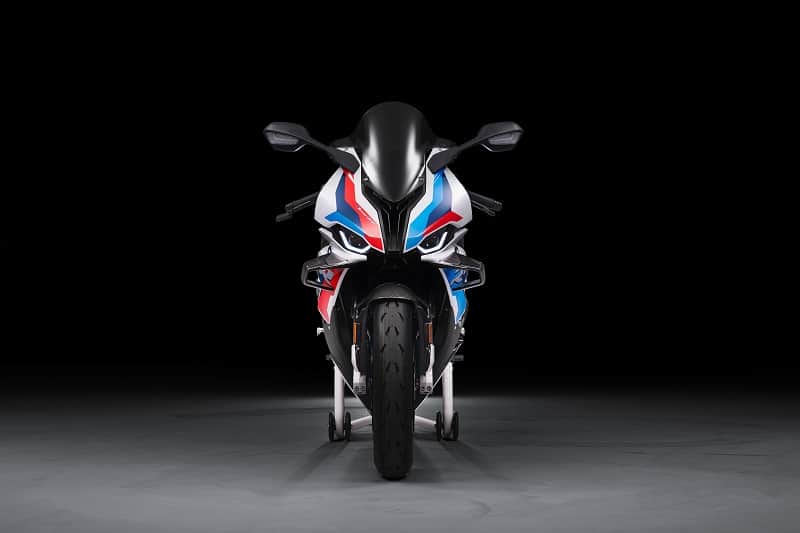 How can they tell? Well the RR can be fitted with the M GPS data logger and M GPS lap trigger to provide comprehensive data material on the 6.5-inch TFT display and OBD interface. With so much ridiculous tech inside the new RR, plus the pioneering engineering skill that comes with M series moniker, this new BMW might just have an unfair advantage over its competitors come race day.

Find out more on bmwgroup.com