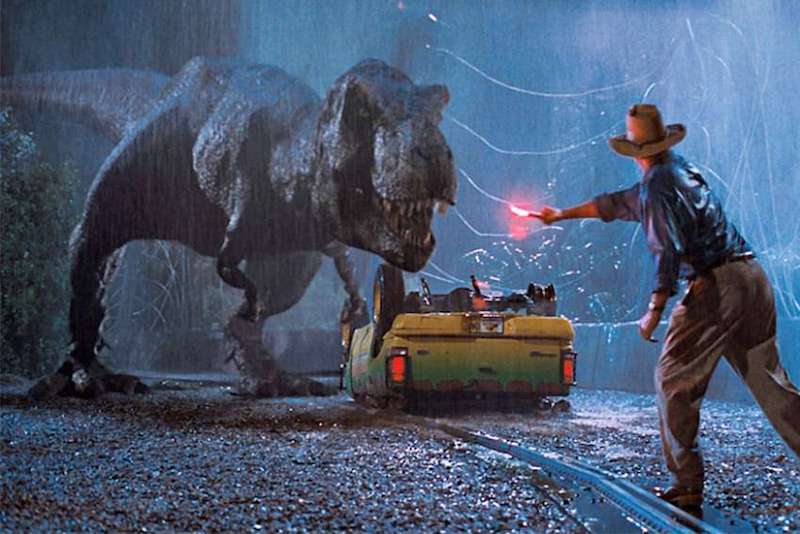 The 14 Greatest Adventure Movies of All Time

Few genres of film are more fun to watch than adventure movies. These flicks often combine exciting storylines with mind-blowing action sequences. What’s more, they cross into other genres. This is a great help if you struggle to agree on a certain film with your significant other. Period dramas, spy thrillers, and superhero movies are just some of the sub-genres of film that fall under the adventure movie banner. This means there is a hell of a lot of films to choose from.

If you are finding the process of picking a flick hard, we’ve got your back. We’ve spent hours watching and rewatching adventure movies to bring you our favorites. From Harrison Ford’s Indiana Jones to Tom Holland’s Spider-Man and everything in between, here are 15 of the greatest adventure movies of all time.

One of the films of the 90s, Jurassic Park changed the movie business forever. Not only does this film contain groundbreaking special effects, but it made millions in merchandise through toys, video games, comics, and other items. This proved too big studios that movies could transcend the big screen and make money in other mediums.

Based on the book by Michael Crichton and directed by Steven Spielberg, Jurassic Park is set on the fictional island of Isla Nublar. Industrialist John Hammond has managed to bring dinosaurs back to life thanks to genetic research. He plans on opening a theme park centered around the dinos. As expected, things go bad and Hammond, along with a group of specialists, find themselves at the mercy of the ancient creatures.

The special effects still hold up today (the first sighting of the T-Rex is heart attack inducing) and the film’s success has spawned four sequels, with a fifth arriving later this year.

Four friends embark on a coming-of-age tale in this tear-jerker from Rob Reiner. Based on the novel by the great Stephen King, Stand By Me follows four boys as they go in search of a dead body. The cast is spectacular (Wil Wheaton, River Phoenix, Corey Feldman, and Jerry O’Connell play the young kids), with a focus on friendship, youthfulness, and nostalgia. The music heard throughout the movie is also fantastic, with Ben E. King’s hit Stand By Me soundtracking the boy’s adventure.

While you could make a case for all of the Indiana Jones films to be on this list (well, maybe not The Kingdom of the Crystal Skull), it is hard to go past the first in this long-running franchise. Harrison Ford, fresh off the success of the Star Wars series, reteamed with George Lucas for this roaring adventure movie.

On the hunt for the Ark of the Covenant, Ford’s Indiana Jones is a whip-cracking archeologist with a quick wit who finds himself in a race against time to find the Ark before it falls into the hands of the Nazis. This Steven Spielberg directed adventure movie is packed with action and was the highest-grossing film of 1981. The film made $330.5 million worldwide, won five Academy Awards, and solidified Ford as a leading man.

Similar to the Indiana Jones franchise, there is a wide selection of Spider-Man films that could make the cut. We have gone with the latest blockbuster Spider-Man: No Way Home. As well as bringing an end to Tom Holland’s trilogy of films, it also features the first two cinematic Spider-Man’s Tobey Maguire and Andrew Garfield. The range of villains is extensive, with the main protagonists from all the early movies also returning. This is a nostalgic fun ride full of great cameos, exhilarating stunts, and a bitter-sweet ending.

British explorers Percy Fawcett (Charlie Hunnam) and Henry Costin (Robert Pattinson) dive deep into the Amazon jungle in search of the Lost City of Z. As is often the case with these types of films, their expedition doesn’t go to plan and they encounter all sorts of drama. While not a big success at the box office, The Lost City of Z has been widely praised by critics, with Hunnam’s performance particularly noted as a standout.

Before Shia LaBeouf went off the rails for the final time, he managed to get his act together for this sweet film about a young man with Down Syndrome (Zack Gottsagen) who wants to be a wrestler. Escaping from his assisted living facility, Gottsagen sets off to find The Saltwater Redneck and train under him to be the greatest wrestler in the world. Along the way, he encounters LaBeouf’s illegal fisherman who agrees to help Gottsagen get to where he needs to be. Throw in Gottsagen’s carer who comes along for the ride and an eclectic cast of characters that includes Jon Bernthal, Dakota Johnson, rapper Yelawolf, and wrestling legend Jake Roberts, and you have yourself an intriguing coming of age adventure that will lift your spirits by the film’s end.

The Rock has starred in a number of big-budget adventure films (Jumanji, Skyscraper) over the years, but Jungle Cruise may be his best. Inspired by the Disney ride, Dwyane Johnson plays a steamboat captain who takes siblings Emily Blunt and Jack Whitehall on an adventure into the Amazon where they encounter supernatural elements along with the jungle itself.

Although the movie only just made back its budget and wasn’t a huge critical success, it has a certain charm that adventure fans will love. A Jungle Cruise sequel has been announced and is sure to be another winner for Dinsey and make the Rock even richer.

The first installment in Peter Jackson’s adaptation of Tolkien’s masterpiece sets the scene for the rest of the trilogy. It introduces all the main characters, provides plenty of exposition, and just enough action to keep you wanting more. Even with the three-hour run time, The Fellowship of the Ring flys by.

Follow young Hobbit Frodo Baggins (Elijah Wood) as he embarks on the adventure of a lifetime, with stellar support from the likes of Viggo Mortensen, Liv Tyler, Ian McKellen, Cate Blanchett, Andy Serkis, and Orlando Bloom.

Written and directed by Stanley Kubrick, 2001: A Space Odyssey is a mesmerizing and at times head-scratching space adventure. A group of astronauts heads to Jupiter to discover more about the origin of a monolith found on the moon and gets more than they bargained for when their onboard A.I. begins to take over.

Kubrick’s space epic divided critics and audiences when first released, but is now regarded as his greatest achievement. It consists of heavy themes and addresses the battle between man and machine that we are sure to come up against one day.

All you need to know about this one is it stars Nicholas Cage as a modern day Indiana Jones looking for a lost treasure hidden by the Freemasons. National Treasure is a super fun adventure romp with Cage in fine form; solving puzzles and avoiding his nemesis (Sean Bean) and the FBI (led by Harvey Keitel) while searching for the treasure. This one has a bit of everything, with Cage even stealing the Declaration of Independence and roping his dad, Jon Voight, in on the act.

National Treasure tripled its $100 million budget and resulted in a sequel that did even bigger business, but the much-rumored third installment is still up in the air. A TV series is currently in the works and set for a 2023 release. Sadly Cage won’t be involved.

This science fiction space opera changed the game. It helped usher in the era of the blockbuster (along with Jaws) and demonstrated that people wanted big, fun, action adventure films. What we now commonly refer to as popcorn movies. The first film in a trilogy, Star Wars: A New Hope, introduced us to Luke Skywalker (Mark Hamill), a simple farm boy who is actually the savior of the galaxy. Teaming up with a roguish smuggler (Harrison Ford), Princess Leia (Carrie Fisher), a Wookie, and a couple of droids, Skywalker takes on the might of the Galactic Empire, led by the evil Darth Vader, who also happens to be his long lost father.

This film really has it all, from an engaging narrative to incredible special effects to the John Williamson score. The cast is also incredible, with the film helping launch the careers of Hamill, Ford, and Fisher. Star Wars: A New Hope kicked off a franchise that is still going strong some 45 years later, and with the advent of Disney+, looks like continuing for another 45.

Reminiscent of sword and sandal epics of yesteryear, The Mummy is a fantastic adventure film starring peak Brendan Fraser. In the mold of Indiana Jones, Fraser’s Rick O’Connell travels to the City of the Dead and happens to awaken the Imhotep. Blessed with supernatural powers, he attempts to make O’Connell’s love interest (Rachel Weisz) his wife.

This is a swashbuckling adventure that ticks all the boxes. Similar to many big-budget movies of the 90s, the special effects are awe-inspiring, helping The Mummy to a worldwide box office of $416.4 million. As well as making big coin, the film launched the careers of Fraser and Weisz and spawned two sequels, a spin-off series (The Scorpion King), and an animated series. Just forgot about the 2017 reboot with Tom Cruise though. Not worth your time.

This adventure film is similar to the Indiana Jones movies except with more emphasis on the romance side of things. When romance novelist Kathleen Turner comes into possession of a treasure map and must head to Colombia to save her kidnapped sister, she gets mixed up with Michael Douglas’ adventurer. The two agree to work together for their own needs and at first, can’t stand each other, but end up falling in love.

Romancing the Stone is a lot of fun and the chemistry between Turner and Douglas is palpable. Danny DeVito, who co-stars as an antique dealer, is also fabulous. The surprise success of the movie resulted in the sequel, The Jewel of the Nile, and although this film didn’t go down well with the critics, it was a commercial hit. A third movie was meant to be produced but never got off the ground, with a remake now the most likely way a new movie in the series will appear.

Another 80s classic, The Goonies is a film loved by everyone. Developed from a story by Steven Speilberg and directed by Richard Donner, this film follows a group of kids who find a treasure map that leads to the buried treasure of a 17th-century pirate. Along the way, they are chased by a family of criminals who are also after the loot and make friends with the deformed yet childlike Sloth.

This cult film also stars some of today’s biggest stars, including Josh Brolin, Corey Feldman, and Sean Astin. Not only is it great fun, but it features an incredible soundtrack that includes Cyndi Lauper’s top ten smash The Goonies ‘R’ Good Enough.