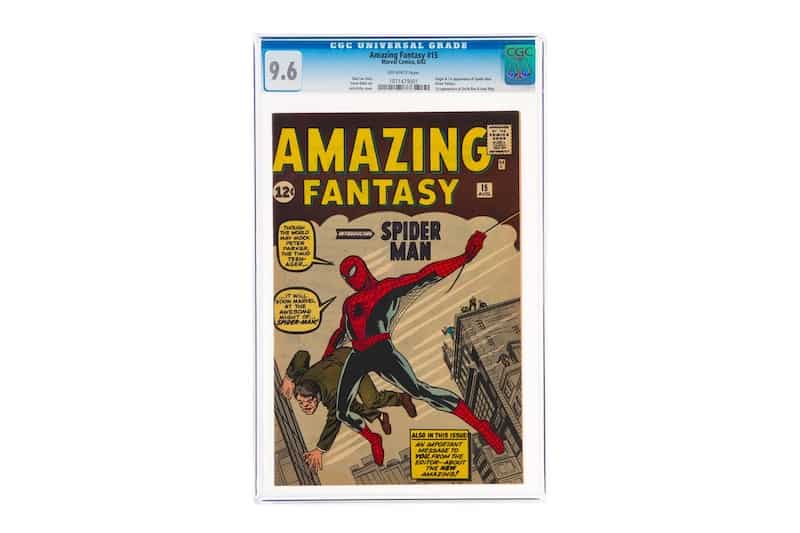 The World’s Most Expensive Comic Book Just Sold for $3.6 Million

It’s time to start digging through your old comic book collection after a rare copy of Marvel’s Amazing Fantasy No. 15 sold at auction for a record-breaking $3.6 million. The sale, via Heritage Auctions, eclipsed the previous sale of a near mint condition of Action Comics No. 1 (Superman’s first appearance) that went for $3.25 million earlier this year.

Amazing Fantasy first launched in July 1961 and was predominately a science fiction comic. Poor sales meant the title was set for cancelation just a year later, so the team of writers Stan Lee and Steve Ditko and illustrator Jack Kirby were allowed complete freedom to do as they please with the final issues.

Lee and Ditko came up with the idea of a boy who gains special powers after being bitten by a radioactive spider. Named Peter Parker, the teenage boy uses his powers for his own means until his Uncle Ben is killed in a robbery he couldn’t halt. The devastation of losing his Uncle prompts Parker to use his powers for good, transforming himself into the superhero Spider-Man.

The issue was a hit with fans but failed to save Amazing Fantasy from cancellation. Thankfully, the character of Spider-Man would be given his own comic, The Amazing Spider-Man, a year later, leading to one of the most loved superheroes in comic book history.

Amazing Fantasy No. 15 was given a grading of 9.6 by Certified Guaranty Company and is one of only four copies believed to still exist.

As comic book heroes continue to be a force to be reckoned with in the mainstream media, there is no doubting more and more vintage collectibles will increase in value and break records at auctions.