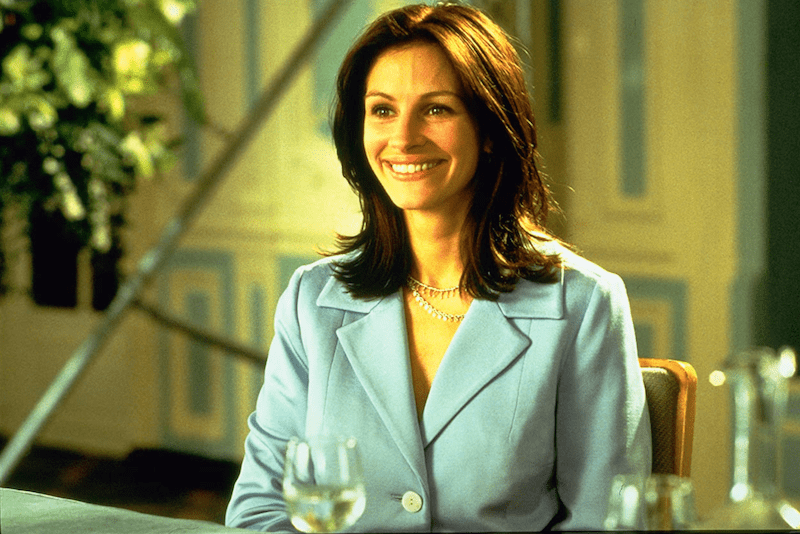 The 12 Best Julia Roberts Movies of All Time

Academy Award-winning actress Julia Roberts has been praised for her most recent work on the Amazon Prime series Homecoming, which came out to critical praise in 2018. Throwing Roberts back into the public eye after a few years of radio silence (and being replaced by Jennifer Gardner), she is set to continue her resurgence with a return to the big screen alongside George Clooney in the rom-com Ticket to Paradise in 2022.

Roberts has a rich filmography that includes romances, comedies, legal thrillers, and heist flicks that have been beloved by audiences for over four decades. We’ve put together a list of the 12 best Julia Roberts movies of all time!

Definitely her most famous role, Pretty Woman stars Julia Roberts alongside Richard Gere (Days of Heaven) in a tale about down-on-her-luck Hollywood prostitute Vivian Ward (Roberts) and the wealthy businessman Edward Lewis (Gere) who spend seven days together. As the week progresses, Vivian and Edward rub off on one another, with Vivian enjoying the “good life” and Edward becoming more straightforward.

This film is a classic, and ultimately, like every good romantic comedy, results in the two of them falling in love as they help one another overcome their own fears and circumstances. Besides a great cast that includes Jason Alexander (Seinfeld) and Héctor Elizondo (The Princess Diaries), the film is all about Roberts, perfectly exhibiting her charm, charisma, and the incredible chemistry between her and Gere that they’d eventually try to find again in Runaway Bride.

A Steven Soderbergh (Logan Lucky) biographical legal drama, Erin Brockovich helped put Roberts on the map as an Academy Award-winning actress. The film, based on the titular character’s true story, follows Brockovich (Roberts) as she fights against an energy corporation’s corrupt contamination of the town of Hinkley’s water supply. Brockovich’s brash and bold “in your face” attitude gets her places no one else can go, proving to be her biggest asset (among other things).

The film is spectacularly directed and stars Aaron Eckhart (The Dark Knight) as Brockovich’s boyfriend George and Albert Finney (Skyfall) as her boss and lawyer Edward L. Masry. As Brockovich flaunts herself to get what she needs so she can raise her children, she stumbles upon this larger human rights issue while working at a legal firm. Her persistence for the truth and desire to make the world a better place for her children is inspiring, making Erin Brockovich a must-watch for any true Julia Roberts fan.

Notting Hill, written by Richard Curtis (Four Weddings and a Funeral), unites Julia Roberts with Hugh Grant (Love Actually), who plays a young man named Will who accidentally meets Anna (Roberts). As fate would have it, Anna turns out to be the “most famous girl in the world,” and as they continue to see one another, things get pretty complicated pretty quickly, though this doesn’t stop them from trying to make it work.

Not only is the relationship between Will and Anna complicated, but it’s often quite humorous as Will introduces her to his friends and family (who all know who she is) and they work to avoid the press. The funniest character in the film is Will’s flatmate Spike (Rhys Ifans, The Amazing Spider-Man), who is almost always walking around in nothing but his underwear. If you’re looking for a film about a “girl asking a boy to love her,” then Notting Hill is the one for you.

A wacky rom-com for sure, My Best Friend’s Wedding showcases the crazy side of Roberts. She plays Jules, a late-20-something who realizes she’s in love with her best friend, Michael (Dermot Mulroney, Shameless), right after he gets engaged to the love of his life. Bad timing has never been a more accurate descriptor. As Jules tries desperately to break Michael and Kimmy (Cameron Diaz, Shrek) up, she does some insane things along the way.

My Best Friend’s Wedding is almost the anti-When Harry Met Sally…, but that doesn’t make it any less fun (and sometimes stressful) to watch. Jules aside, her gay friend George (Rupert Everett, An Ideal Husband) is the one who really steals the show when he leads the whole wedding party in a rendition of I Say a Little Prayer, which cleverly comes back in the final act because “by God, there will be dancing.” This realistic representation of unrequited love is an excellent addition to Roberts’ filmography and a must-see.

Wonder is a heart-wrenching coming-of-age drama based on the 2012 novel of the same name that follows a young boy with Treacher Collins syndrome named Auggie (Jacob Tremblay, Doctor Sleep) that reminds us “you can’t blend in when you were born to stand out.” Julia Roberts and Owen Wilson (Zoolander) play his incredibly supportive parents, Isabell and Nate Pullman, who do their best to guide him through the rough, and often unforgiving world around him.

This film makes the heart swell and, at times, can bring even the strongest person to tears as we follow Auggie’s journey through middle school. As Auggie struggles to make friends, his mom becomes his biggest cheerleader, encouraging him to keep trying no matter who bullies him. “You really are a wonder, Auggie,” she exclaims. If you’re looking for a film that you can watch with your kids that has a real positive message (and lots of heart), then look no further than Wonder!

A bit of a genre shift, The Pelican Brief is based on a John Grisham novel and stars Roberts as young law student Darby Shaw, who has uncovered a vast criminal conspiracy that involves the deaths of two Supreme Court Justices and has resulted in the death of everyone else who knows. The only person she can trust is Denzel Washington (Training Day), who plays Gray Grantham, an investigative journalist who does everything he can to expose the truth.

Through fiery trials that include multiple assassination attempts, Shaw and Grantham fight to expose this vicious conspiracy before both are taken out for good. Roberts and Washington play off one another excellently, and while this film didn’t make it on our best of Denzel Washington list, his acting chops are on clear display here. Roberts is at her best as she fights hard to escape death and attempt to save others, proving to be a true hero herself.

A Tony Gilroy (The Bourne Identity) romantic crime comedy, Duplicity stars Roberts alongside Clive Owen (Inside Man) as two corporate spies, Claire Stenwick and Ray Koval, who collaborate on a complicated con job, all while juggling their own romantic past. If this sounds a little like Mrs. & Mrs. Smith meets your average heist flick, then think again, as the story is told completely out-of-order, which actually works out really nicely.

Duplicity is a quirky, smart, and real funny spy film that pits Roberts and Owen against each other while remaining on the same side. Their constant back-and-forth is thrilling, keeping each other (and us) guessing as to whether or not they can actually trust one another. The pairing of these two could easily have become a regular thing, and thankfully this isn’t the only film they pair together in.

An adaptation of the 1980s play of the same name, Steel Magnolias has been branded as “the funniest movie that will ever make you cry.” The film follows a group of small-town southern women who learn how to deal with the death of one of their own. With a large ensemble cast that includes Sally Field (The Amazing Spider-Man) and Dolly Parton (Joyful Noise), Roberts plays the eldest child Shelby, who suffers from Type 1 diabetes.

Writer Robert Harling (Laws of Attraction) wrote Roberts’ character based on his own sister who passed away in 1985 of complications from Type 1 diabetes. In fact, the entire original play was written to help Harling cope with his sister’s death. Roberts and the rest of the cast put their heart and souls into this adaptation, bringing this hilariously tragic tale to life.

Another biographical comedy-drama, Charlie Wilson’s War stars Tom Hanks (The Post) as Congressman Charlie Wilson opposite Roberts as his friend, romantic interest, and American socialite Joanne Herring. Wilson and CIA operative Gust Avrakotos (Phillip Seymour Hoffman, A Most Wanted Man) cook up a dodgy deal known as Operation Cyclone that leads to the US’s involvement in the Soviet-Afghan War.

With a screenplay by Aaron Sorkin (The West Wing) and direction from Mike Nichols (Carnal Knowledge), Charlie Wilson’s War is an excellent film that shows how spectacular Roberts, Hanks, and Hoffman are at wowing audiences with their unparalleled commitment to their craft. This may not be the most Roberts-heavy film on the list, but she does a damn fine job at making it worth the watch.

As three teenage girls come of age while working at a pizza parlor in the small Connecticut town of Mystic, they end up getting themselves into a lot of trouble. Julia Roberts, Annabeth Gish (Midnight Mass), and Lili Taylor (The Conjuring) star as Daisy, Kat, and “Jojo,” while Matt Damon (The Martian) appears in a smaller capacity in his film debut. Jojo has lost her head, Daisy has lost her mind, and Kat has just lost her heart.

Often labeled a “chick flick,” Mystic Pizza is a lot of fun and very must a product of its time (“it’s the ‘80s!”), but that’s just part of its charm. Gish, Taylor, and Roberts all shine in their respective roles and deal with their own romantic heartaches (or is it headaches?) as well as any late-teen can. Sure it’s cheesy, but this one at least has the guts to put that right in the name.

A Mike Nichols romantic drama Closer follows four people with very different perspectives on life and love. Roberts plays photographer Anna Cameron who gets together with Larry Gray (Clive Owen), after being set up by Dan Woolf (Jude Law, Sherlock Holmes) after he becomes infatuated with Anna, which torments his girlfriend Alice (Natalie Portman, Black Swan). Confused yet? This one gets pretty complicated as the relationships change, evolve, and devolve into a shell of what they once were.

There are a lot of complex understandings of what love means, the value of intimacy, and the power of sex here in Closer, but that’s what makes this one unique. Roberts does a phenomenal job as always, as she is further accented by her stunning castmates who all wow. Between intense betrayals, love and loss, and continual emotional turmoil, this is one of Roberts’ most interesting films yet.

A remake of the 1960s classic of the same name, Ocean’s Eleven is one of the most popular (if not the most popular) heist films out there The beginning of a trilogy, the film follows Danny Ocean (George Clooney, O Brother Where Art Thou?) and Rusty Ryan (Brad Pitt, Fight Club) as they plan a grand casino heist that involves them stealing over $150 million from the lover of Ocean’s ex-wife, Tess (Roberts), who is a Las Vegas casino owner (Andy Garcia, The Untouchables).

This fast-paced and witty film, along with its sequel, Ocean’s Twelve, doesn’t fail to entertain with an extended cast that also includes Matt Damon (The Bourne Identity), Casey Affleck (Manchester by the Sea), and a host of others. Roberts is a huge draw, as always, and plays a funnier role in the sequel in which Tess has to pose as a pregnant Julia Roberts. Yeah, you read that right, it’s great. Sadly, Roberts didn’t return for either Ocean’s Thirteen or Ocean’s Eight, but her work in these two is unparalleled.