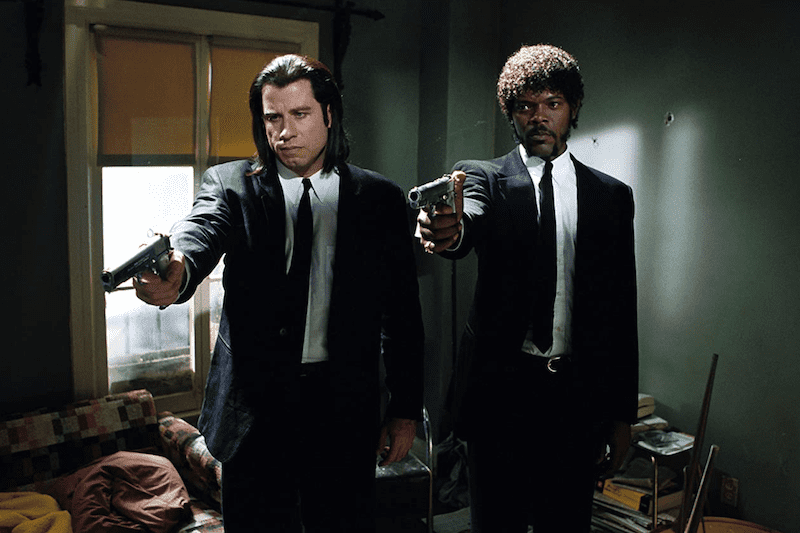 Love him or hate him, there’s no doubt that Quentin Tarantino is a filmmaking legend with a truly impressive career. With only one more film to go until he reaches his infamous tenth “retirement picture,” Tarantino’s filmography includes classics that both casual viewers and cinephiles alike hold in high esteem. Besides maybe the Coen Brothers, no modern filmmaker has a larger cult following than Quentin Tarantino.

His foot fetish aside, QT is one of the most influential filmmakers of his day and has remarkably honored the past while propelling the industry into the future. From nostalgic crime pictures to revisionist history films, he’s done it all and continues to shock and awe audiences everywhere. Today, we’re ranking all of Quentin Tarantino’s directorial feature films from worst to best, starting with the underappreciated Death Proof.

If you’re looking for a bizarre thriller to watch this weekend, look no further than Quentin Tarantino’s Death Proof. The second part of the double-feature Grindhouse – that also features Robert Rodriguez’s Planet Terror – this slasher follows aging stuntman Mike McKay (Kurt Russell, The Thing) as he preys on young girls in Austin, Texas, and Lebanon, Kansas with his apparently “death proof” stunt car.

Probably not anybody’s favorite Tarantino movie by any stretch (he’s even claimed it has to be the worst movie he’s ever made), Death Proof, and Grindhouse as a whole, pays tribute to the exploitation films of the 1970s that often included B-pictures to reel audiences into theaters based on working trends. This one is a bit rough around the edges, but Russell manages to deliver a charming performance and the final cchase scene is out of this world.

Death Proof, as the second hour of Tarantino’s collaboration with Rodriguez, is something of a blast from the past, reminding us of a style of filmmaking that’s rarely seen these days.

Starring Pam Grier (Escape from L.A.) in the titular role, Tarantino’s Jackie Brown is a crime film based on the Elmore Leonard novel Rum Punch. The movie pays homage to the blaxploitation films of the 1970s, including Grier’s other well-known pictures Foxy Brown and Coffy. This flick sparked new life into Grier’s feature film career as she, along with leading man Robert Forester (The Descendants), hadn’t featured as the main star for many years.

The film follows Jackie Brown (Grier), a flight attendant with a criminal past who is nabbed for smuggling, only to become an informant for the FBI while trying to preserve her life in the process. The film also stars frequent Tarantino collaborator Samuel L. Jackson (Shaft) as gun runner Ordell Robbie, Robert De Niro (Goodfellas) as recently released convict Louis Gara, Bridget Fonda (Single White Female) as no-hoper Melanie Ralston, and Forester as bail bondsman Max Cherry. Jackie Brown served to be Tarantino’s only film adaptation based exclusively on previously existing work and is a fun blaxploitation feature that constantly asks the dangerous question: who is playing who?

Tarantino’s eighth motion picture, The Hateful Eight (aptly named) is a Revisionist Western about eight strangers who seek shelter from a blizzard in Minnie’s Haberdashery. Set in late 1800s Wyoming, the movie was originally conceived as a sequel to his earlier film Django Unchained. Tarantino retooled the story as a stand-alone feature with entirely new characters. In fact, Tarantino actually re-edited the film into a four-hour mini-series for Netflix a few years back.

Kurt Russell once again stars as bounty hunter John “The Hangman” Ruth alongside QT trademark Samuel L. Jackson as Major Marquis Warren, Jennifer Jason Leigh (Atypical) as the fugitive Daisy Domergue, and Walton Goggins (Justified) as wannabe sheriff Chris Mannix, among others. QT’s attention to detail and tactical subversions make this film a work of art. Plus, Ennio Morricone (The Good, The Bad, and the Ugly) re-emerged to score this film, which is insanely cool!

Another Western by Tarantino, Django Unchained is a killer revenge story that follows Django Freeman (Jamie Foxx, Just Mercy) as he travels through the Old West and the Antebellum South to save his wife from a cruel plantation owner Calvin J. Candie (Leonardo DiCaprio). With the German Dr. King Schultz (Christoph Waltz) by his side, Django is a man on a single revenge mission that will have you on the edge of your seat.

Tarantino’s love for the iconic Spaghetti Western is on full display here as the film plays as a tribute to the 1996 classic Django, with the film’s star Franco Nero even appearing in a cameo. This brutal picture is one of Tarantino’s best, with magnificent performances from Foxx, DiCaprio, and Waltz that will make you cheer and cringe. If you haven’t seen Foxx in Django Unchained, then you haven’t seen Foxx at his best.

Django Unchained is easily one of the best Westerns of the past 20 years and holds up as one of Tarantino’s greatest filmmaking achievements.

Possibly the biggest and boldest of Tarantino’s filmography, Once Upon A Time… In Hollywood is QT’s most obvious love letter to the film industry. The film, set in the late 1960s, follows fading Hollywood actor Rick Dalton (Leonardo DiCaprio, Inception), the star of the 1950s Western series Bounty Law, and his stunt double Cliff Booth (Brad Pitt), as they navigate the steady decline of their respective careers.

But like another of his films we are yet to mention, … In Hollywood turns out to be another revisionist history picture, set alongside the backdrop of the Manson Family murders, with Damon Herriman (Justified) as Charlie Manson and Margot Robbie (The Suicide Squad) as Sharon Tate. This one is wild and includes probably some of the most impressive performances DiCaprio and Pitt have given in years. Plus, Tarantino adapted it into a novel and is working on a Bounty Law television series with Leo.

Once Upon A Time… In Hollywood is Tarantino’s most overt love letter to an era of filmmaking that is long gone, but this nostalgia-piece still manages to be one of his best works yet.

Tarantino’s originally two-part martial arts film, Kill Bill: The Whole Bloody Affair, unites Kill Bill: Volume 1 and Volume 2 into what QT considers to be one complete feature. It follows The Bride (Uma Thurman, Dangerous Liaisons) once she wakes up from a four-year coma after being shot by her ex Bill (David Carradine, Mean Streets) on her wedding day. Due to this, and the apparent loss of her unborn child, she seeks revenge on Bill and his Deadly Viper assassins.

This one has it all, including animated sequences, lots of martial arts action, and more genres in one film than your average Bollywood picture. Kill Bill is easily some of Uma Thurman’s most impressive work and definitely pushes all the envelopes as far as what Tarantino thinks is possible for a single (two-part) film.

Tarantino’s only strictly war film, Inglourious Basterds is his first revisionist history film that centers around two different plots to assassinate the leadership in Nazi Germany. One of them is headed up by a young, French Jewish cinema proprietor (Melanie Laurent, Now You See Me), and the other by the British government. Ultimately, it’s executed by a group of Jewish-American soldiers led by First Lieutenant Aldo Raine (Brad Pitt, Fight Club).

This insane World War II action piece shows the utter brutality of war itself. With an incredible cast that also includes Michael Fassbender (Hunger), Christoph Waltz (Spectre), Til Schweiger (Driven), Daniel Brühl (Rush), Eli Roth (Aftershock), and Diane Kruger (Unknown), Inglourious Basterds is QT’s third highest-grossing film and one of his most critically acclaimed. Oh, and although the title was inspired by the 1978 film The Inglorious Bastards, this film is not a remake.

Quentin Tarantino’s directorial debut turned out to be an independent cult classic. Reservoir Dogs is a crime story about diamond thieves whose planned jewelry heist goes terribly wrong. Told non-linearly, all of the classic Tarantino staples begin here: the pop culture references, the violent crime, the non-era-centric soundtrack, and the quirky dialogue (complete with every profanity you could ask for).

The film stars Harvey Keitel (Taxi Driver), Tim Roth (Lie To Me), Chris Penn (True Romance), Steve Buscemi (Fargo), Michael Madsen (Pulp Fiction), and Tarantino himself among others., This independent masterpiece is an excellent example of Tarantino’s skill, regardless of his budget. The final Mexican standoff is one of the greatest in film history and remains one of the best twist endings you won’t see coming.

No Quentin Tarantino movie has had more cultural impact on the film industry, both Hollywood and independent, than Pulp Fiction. A black comedy crime drama that follows several interconnected stories told outside of the traditional chronological order, this film takes its primary inspiration from pulp magazines and hardboiled crime novels, taking place in a then-contemporary 1990s Los Angeles.

The film stars John Travolta (Swordfish), Samuel L. Jackson (Shaft), Uma Thurman (Kill Bill 1 & 2), Bruce Willis (Unbreakable), Tim Roth (Rob Roy), Christopher Walken (The Deer Hunter), and countless other Tarantino icons (including the director himself) as their characters cross paths over a number of days in LA, with many of the stories linked to the mysterious contents of Marsellus Wallace’s (Ving Rhames, Mission: Impossible) briefcase.

Pulp Fiction is Tarantino’s most beloved masterpiece with excitingly witty dialogue and hilariously intense situations that will make you want to rewatch it again as the credits roll.