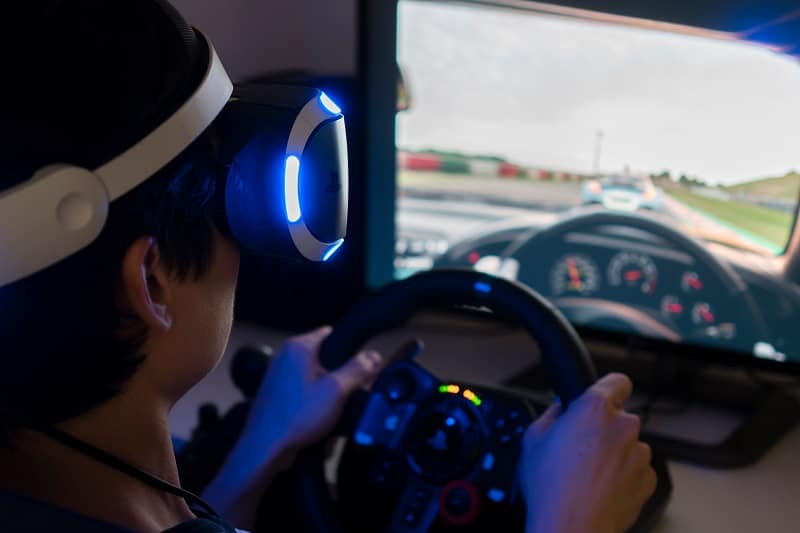 The PlayStation 4 has a seemingly countless number of games including dozens of racing games.  However, some of the console’s racing games are quite immersive while others are comparably forgettable.

However, there is no sense sorting through all of the titles looking for the cream of the crop when our team has identified the best racing titles on your behalf.  Without further ado, let’s take a look at the top PlayStation 4 racing games.

Older gamers might remember the original Crash Team Racing on the first PlayStation console. Crash is back and better than ever with a sequel to the hit racing title dubbed Nitro Fueled.

If you are more interested in kart racing as opposed to a racing simulator, CTR Nitro Fueled provides you with arcade-style racing in cartoon-like setting.  In other words, CTR Nitro Fueled is similar to the uber-popular Mario Kart series.

This remastered version of the original CTR game notches up everything from the original, adds new characters, implements fun new power-ups and even features new weaponry. In fact, CTR Nitro Fueled also lets players race online with others. If you played the original CTR and are worried this remaster will be the same old thing with a more aesthetically pleasing look, don’t fret.

The new CTR boasts the forementioned additions along with brand new tracks and a bevy of cool new karts to boot. Fire up the new CTR Nitro Fueled and you are sure to have a blast whether you are a “couch gamer” who plays with friends and family or prefer online play with your buddies.

When it comes to racing games, it is hard to top the Gran Turismo series. Similar to CTR, this racing series also stems all the way back to the first Sony PlayStation. In fact, Gran Turismo is the PlayStation’s flagship racing title. This is the perfect racing simulation.

Highlighted by 60 frames per second (fps) to prevent visual slowdowns and uber-sharp 4K resolution, the latest edition of Gran Turismo provides racers with more than 150 cars, nearly 20 racetracks and 50+ layouts. Though Gran Turismo Sport is a couple years old, it is still one of the best racers on the market.

Do not be intimidated by this racing simulator. Even if you are a racing newbie, you will find the game feels quite intuitive thanks to its driver assist features that help with braking, steering, stability control, throttle control, etc.

A large part of the appeal of Gran Turismo is its extensive customization options. Personalize your racing vehicle as you see fit, continue to modify your ride as you progress through the game, take some snapshots of your vehicle and share them with your friends on social media.

Virtual reality fans will be ecstatic that Gran Turismo is fully compatible with the console’s VR technology, providing the opportunity to race in a truly immersive and seemingly real three-dimensional environment. All in all, Gran Turismo provides racers with 150+ vehicles to choose from, four unique gameplay modes, a “Scapes” mode for taking photos, myriad social features and plenty more niceties sure to please racing fans.

Released in 2019, Need for Speed Heat is the latest edition of the popular Need for Speed series. This is a colorful, energetic and entertaining racing game. Load up the latest Need for Speed and you will quickly find yourself immersed in the racing action. The game provides you with the opportunity to play the part of a street racer, competing in daily showdowns and nighttime underground races while attempting to avoid the long arm of the law.

Need for Speed Heat is centered on a story in which you are a newbie racer looking to climb your way to the apex of the local racing scene. You have a small team on your side consisting of a mechanic and a partner in crime dubbed Ana who helps coordinate races.

The aim is to progress to the point that you earn a place in the group of local expert racers called “The League”. Once you make it to The League, you have access to the best cars and earn the respect of the top racers in town.

From this point, you and your fellow racers are hunted down. The aim is to sidestep the authorities while winning the racing crown.

Racing modes include off-road courses that make the game that much more expansive in scope. The nighttime races are especially enjoyable as players are forced to avoid predators in the form of an evil task force intent on destroying racers and their vehicles.

You can dress up your racer with your preferred gear, progress through a bolstered career mode and battle against a much-improved artificial intelligence.

The game’s tracks and series include the Xtreme Dirt Tour, the Gander Outdoors Truck Series, the Xfinity Series and the Monster Energy NASCAR Cup Series. NASCAR Heat 4 also provides the opportunity to race as a member of a NASCAR race team through esports competitions.

Add in the fact that new versions of the game (as opposed to pre-owned) have a $50 NASCAR race ticket and it is that much more tempting to pick up this title. In short, if you are a fan of NASCAR, you will absolutely love this PlayStation 4 racing title.

If you are a gearhead or simply looking for some racing fun in the comfort and safety of home, look no further than Project Cars 2. This title empowers you to race on 140 tracks in more than 50 locations during each of the four seasons. That means you will be racing on ice, snow, mud and clean pavement.

Everything from the weather to the direction of the wind, elevation and location play a part in your racing strategy. The game is detailed to the point that the angle of the sun alters the temperature of the racing track.

Select your vehicle from nearly 200 including hypercars and karts, hit the track and you will have a ball racing your heart out. Uber-serious racing fanatics will find there is plenty of opportunity to compete with fellow racers through the game’s esports competitions such as ESL Cups that take place each week.

If open world racing is your thing, you will adore The Crew 2. The Crew 2 provides you with the opportunity to race cars, monster trucks, motorcycles, boats and even planes in numerous types of gameplay.

This is an open world game so players have the opportunity to explore a wide array of environments, landscapes and racing tracks. However, The Crew 2 is not the type of game you play on your own. This is more of a community-based gaming experience played on the web. Upwards of seven people can play the game in PvP mode. In fact, The Crew 2 also features a Demolition Derby mode that harkens back to the 1995 Destruction Derby title on the original PlayStation.

In short, The Crew 2 is the perfect blend of Need for Speed and Cannonball Run. The game has polished graphics, intuitive controls, enjoyable gameplay and an abundance of content sure to keep your and your friends entertained for hours.

Whether you are interested in off-road racing, pro racing, street racing or freestyle, you will have the opportunity to compete in your preferred mode in this hit racing title.

Those who prefer destruction-oriented racing with eye-popping collisions and ongoing battles amidst races will find Wreckfest is right up their alley. The purpose of Wreckfest is to reach the finish line before your competitors while laying waste to as many opponents as possible during the race.

There are no rules governing Wreckfest racing. Rather, the focus is on combative racing that provides thrills certain to keep you coming back for more. The game is chock full of customization options, upgrade options, demolition derby mode and plenty more.

Wreckfest even provides insanely fun challenge modes in which players can slam crop harvesters, school buses, lawnmowers, three-wheelers and more into one another.

The game also features online play so you can race and smash into your friends, strangers and others from the comfort of your living room.  In short, Wreckfest is perfect for car and racing fanatics who favor intense racing, violence, destruction and chaos.