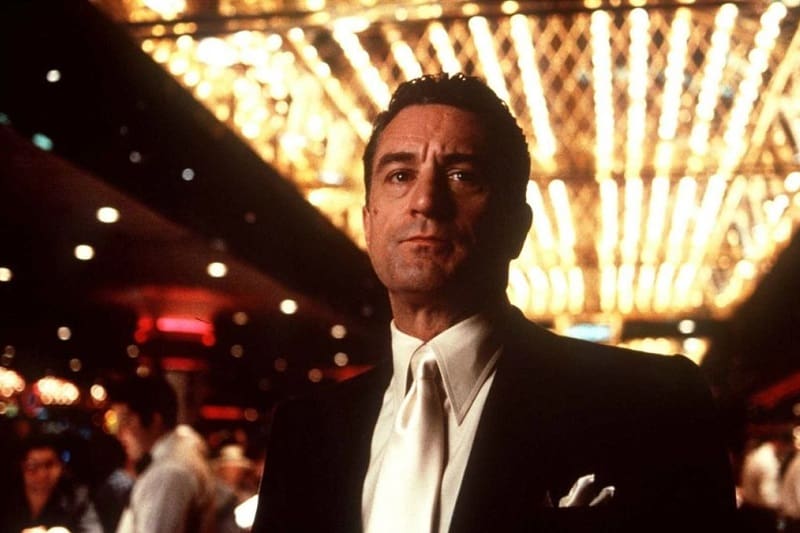 The 15 Best Robert De Niro Movies Of All Time

Robert De Niro is one of Hollywood’s most profitable and reliable stars who still manages to remain in the spotlight despite the height of his career having passed. Known largely for his gangster pictures, his frequent collaborations with Martin Scorsese, and his stint in comedy (Meet the Parents anyone?), Robert De Niro still manages to give his all when in front of the camera, and that’s why we love him.

Here is our list of Robert De Niro’s all time best screen performances you don’t want to miss.

One of Martin Scorsese’s most notable works, and certainly the film that really thrust De Niro into the spotlight, Taxi Driver is about Travis Bickle, a veteran (and taxi driver) in New York City who is slowly losing his mind. Striving to fight against local injustice (including liberating a child prostitute), Travis plunges into various acts of violence that pull him into the public eye.

If you’re looking for a classic Robert De Niro flick that pushes boundaries and makes you think, Taxi Driver is the film for you.

Eat your heart out, Rocky! Raging Bull (another Scorsese picture) stars De Niro as real-life, Italian-American middleweight boxer Jake LaMotta as he fights a never-ending battle of self-destruction and obsession, leading to a breaking point between him and his family. Joe Pesci (Goodfellas) also stars as Jake’s brother and manager Joey.

Raging Bull is a simple film with a wide range and raw emotions that will manage to keep you glued to the screen as it breaks your heart.

An American crime epic directed by Martin Scorsese, Casino features De Niro alongside frequent collaborator Joe Pesci in a film about greed, power, and friendship. Along with De Niro and Pesci, this gangster epic also features Sharon Stone (Total Recall), James Woods (Vampires), Kevin Pollak (The Usual Suspects), and comedy legend Don Rickles. De Niro stars as “Ace” Rothstein who is sent by the Chicago mob to handle some of their business in Las Vegas. As you can guess, things don’t go to plan as De Niro finds himself in the deep end.

As De Niro and Scorsese’s eighth collaboration, Casino is one of the best, not just as a gangster epic, but as one of De Niro’s most solid performances on screen.

Often cited as one of the greatest films of all time, The Godfather Part II is a masterpiece featuring De Niro (Taxi Driver) as a young Vito Corleone. It’s a fascinating and extensive look at two different time periods (and lives) as the film intercuts between young Vito and his son, Michael (Al Pacino, The Godfather), both working to ensure and protect the family business.

The Godfather Part II is one of De Niro’s most iconic roles, as he steps into Marlon Brando’s very large shoes, fitting them quite nicely.

Arguably the greatest crime drama of all time, Heat is memorable for its opposing character-driven dramas. De Niro plays career thief Neil McCauley who’s looking to get out of the game before it’s too late. Al Pacino stars as veteran LAPD Detective Vincent Hanna, an obsessed cop with a failing marriage hot on the heels of McCauley. Despite the heavy focus on the two characters, they only interact once, in the memorable coffee shop scene, also the first time De Niro and Pacino shared a scene together.

Heat is a pulse-pounding slow-burn (emphasis on slow), but one that pays off in the end.

Dipping briefly into De Niro’s comedic talent, Scorsese’s The King of Comedy is just that, a satirical black dramedy about Robert Pupkin, an aspiring (and delusional) stand-up comedian whose life is not quite what he’d hoped. His continual fantasies about late-night host Jerry Langford (Jerry Lewis, actually the “King of Comedy”) are hilariously disturbing.

If you’re a fan of the recent film Joker (which actually features De Niro as a late-night host), then The King of Comedy (and Taxi Driver) are a must-see as both are the clear blue-print for the 2019 award-winner.

One of the most revered Vietnam War dramas to come out of this time period, The Deer Hunter is about three Russian-American friends; Mike (De Niro), Nick (Christopher Walken, The Prophecy), and Steven (John Savage, Dark Angel) as they deal with the trauma of war and the bonds of friendship, two of them even loving the same woman.

While director Michael Cimino (Heaven’s Gate) might not have been able to recreate the magic he made with The Deer Hunter, De Niro has been more fortunate.

Yes, another gangster flick… GoodFellas is a biographical drama (directed by Scorsese of course) about the rise and fall of mob boss associate Henry Hill (Ray Liotta, Field of Dreams) that spans three decades, and as the name suggests, is a real good time. The stellar cast includes gangster film legend De Niro as Jimmy Conway and Joe Pesci as Tommy DeVito.

GoodFellas remains one of De Niro’s best and is often regarded as one of the greatest gangster movies ever made.

Another De Niro/Scorsese picture, Mean Streets is an interesting look at the struggles of a young Italian-American in Little Italy (Harvey Keitel, The Irishman) as he fights between his illegal Mafia activities and his devout Catholicism, all the while taking care of his young, volatile friend, Johnny Boy (De Niro).

De Niro’s performance as Johnny Boy Civello is outstanding, while the unsure ending will leave you wanting more.

While most De Niro roles are characterized by their shades of grey, his role of convicted rapist Max Cady in Cape Fear is one of his darkest. Nick Nolte (Thin Red Line) stars opposite De Niro as the rapist’s former lawyer who he’s now terrorizing upon his release. De Niro is utterly terrifying in this film, playing the role of psychopathic seducer almost too well as he mercilessly stalks, harasses, and beats Nolte and his family.

The aptly named Cape Fear is certainly that, with a long list of thrills that will definitely make you want to sleep with the lights on for the next few weeks.

See more about - The 13 Best Gangster Movies Of All Time

Based on the book of the same name, The Untouchables tells the story of 1930s Prohibition-era Chicago in which Bureau of Prohibition agent Elliot Ness (Kevin Costner, Yellowstone) works to take down mob boss Al Capone (De Niro). De Niro gets Capone down to a tee and truly stands out in this mobsterpiece that is equal parts exciting and fictional.

While The Untouchables is based on true events, many of the events of the film were heavily fictionalized by writer David Mamet (The Verdict), but that doesn’t make it any less exciting.

Sergio Leone (The Good, The Bad, and The Ugly) had his own take on the gangster genre with his Italian-American venture Once Upon A Time In America. This intriguing drama about friendship and regrets stars De Niro as Noodles and James Woods as Max, best friends who lead a group of Jewish youths from the ghetto into the world of New York organized crime.

Once Upon a Time in America is a four-hour epic and the final film Leone directed before his death.

Ronin is an action-thriller by John Frankenheimer (Birdman of Alcatraz) that has some of the best and most realistic car chases in the business. Not to mention Robert De Niro as a former CIA mercenary. And if that doesn’t make you want to check this one out, then nothing will.

While the plot might be a little convoluted, don’t let that scare you, Ronin is an action achievement that sticks the landing. All it asks of you is that you take the ride.

Before his work on modern classics such as Logan, Ford v Ferrari, and Walk the Line, James Mangold’s Cop Land took center stage. Starring Sylvester Stallone (Rocky) as a small-town New Jersey sheriff and De Niro as an Internal Affairs investigator, Cop Land deals with the corruption within the NYPD in a way no other film can.

In spite of all the police brutality and corruption we see spotlighted today, De Niro and Stallone make it clear that even in Cop Land no one is above the law.

De Niro’s most recent collaboration with Scorsese (their ninth in total, with a tenth on the way), The Irishman stars De Niro, Pacino, and Pesci in a three-hour crime epic that takes the gangster genre to a new level. Serving as both a homage to Scorsese’s previous work, as well as the previous gangster works of the film’s stars, while also based on the life of a real-life hitman, this one is a slow-burn.

While The Irishman isn’t really a page-turner, it is a gangster epic worth the watch if not just for the title performance alone. De Niro has proven, once again, that he’s still got it.

See more about - The 15 Best Thriller Movies Of All Time