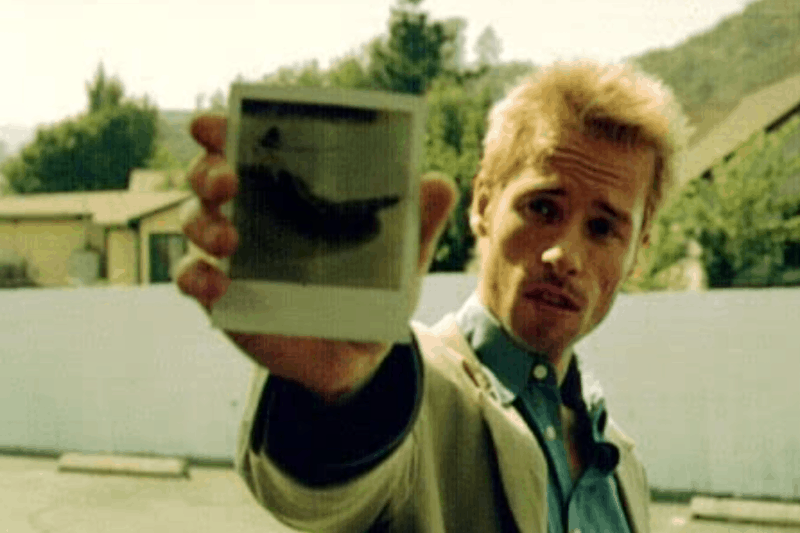 The 15 Best Thriller Movies of All Time

People love movies that excite them, that keep them guessing until the end, on the edge of their seat just waiting to see how it’ll all turn out. While horror movies can accomplish this with ease, most people don’t actively want to be scared. If you’re one of those people, we’ve got another option for you.

Today we’re bringing to you our list of the best thrillers of all time; films that will both make you anxious and pique your interest until long after the credits roll. With movies from various periods of film history, we hope you find something you like.

Christopher Nolan (TENET) is a household name today, but his first real “big break” in Hollywood was Memento, a jumbled story about Guy Pearce (The Proposition) trying to find the man who murdered his wife, the mysterious “John G.” Memento is a thrill as it’s unique story structure both works to allude to the truth and confuse the audience in the same breath.

Between Nolan’s air-tight screenplay and the film’s editing (masterfully juxtaposed by Dody Dorn), Memento plays hard-to-get with your mind as you work to understand everything Lenard (Pearce) is trying to understand himself. It’s a black-and-white/colored mess that all seems to sort itself out by the end… Or, does it?

The David Fincher (Fight Club) masterpiece that ends up on countless thriller lists, Se7en is a cinematic classic that features an intense set of murders based on the seven deadly sins. The film stars Brad Pitt (Moneyball) and Morgan Freeman (Million Dollar Baby) as Detectives David Mills and William Somerset as they work to find the “John Doe” responsible.

Between the dark material, editing, and relationship between Mills and Somerset, as well as Tracy Mills (Gwenyth Paltrow), Se7en works hard to create a fallen, broken world from which our heroes may not be able to escape.

Comedy icon Adam Sander (Happy Gilmore) takes on the role of Howard Ratner in this crime thriller about a gambling addict who gets in over his head. Uncut Gems was one of 2019s biggest films and is production giant A24’s highest-grossing film domestically. It’s definitely a diamond in the rough.

Speaking of rough, Sander’s take on the jeweler (which is somewhat of an ironic job title) is a lot to take in. Ratner’s slimy dealings begin to catch up to him as he deals with his failing marriage, addiction to gambling, and all-around desire for more. It’s certainly one of the most anxiety-inducing movies on this list.

I Saw The Devil is a South Korean action thriller directed by Kim Jee-Woon (A Tale of Two Sisters) about NIS agent Kim Soo-Hyun (Lee Byung-Hun), who hunts a psychopathic serial killer (Choi Min-Sik) after the murder of his fiancee. This film is nuts.

Playing with your preconceived notions of what a thriller should be, Jee-Woon takes it all a step further as Soo-Hyun hunts down Jang Kyung-Chul (Choi) and does whatever is necessary to exact his revenge. The intense thriller is one of the more unconventional films listed here, and definitely worth checking out.

Probably Christopher Nolan’s most infamous masterpiece, The Prestige is the story of two magicians as they work to out-perform one another during the turn of the century. As Angier (Hugh Jackman, Logan) and Borden (Christian Bale, The Dark Knight) work to up-stage the other, their battle becomes not only more personal, but more dangerous.

Besides Jackman and Bale, the film’s all-star cast also includes Scarlett Johansen (Black Widow), Piper Perabo (Covert Affairs), Andy Serkis (The Lord of the Rings), Rebecca Hall (The Town), Michael Cain (Interstellar), and even David Bowe (Labyrinth) as Nikola Tesla himself. Honestly, The Prestige is one of the best thrillers you’ll ever watch and this author’s favorite Nolan feature.

We’re talking about the original John Carpenter (Halloween) film here, not the 2005 remake. Assault on Precinct 13 is the story of a police officer (Austin Stoker, Battle for the Planet of the Apes) who defends his precinct from a relentless gang with the help of a convicted murderer (Darwin Joston, Eraserhead). It’s a classic Carpenter film with direct editing and an immersive score by the cult classic genius himself.

Initially wanting to make a Howard Hawks type Western, Carpenter ended up writing Assault on Precinct 13 as a sort of “Rio Bravo in modern-day” (modern-day being the 70s, but still). Between the impending threat of the Street Thunder gang on the outside and convict Napoleon Wilson (Joston) on the inside, there’s not a better cult action-thriller out there.

Zodiac is the film that started making people take Jake Gyllenhaal (Nightcrawler) seriously, and for good reason. This sleek historical thriller (set in the late 60s/early 70s) from thriller legend David Fincher features the attempts of the San Francisco police force to track down and catch the infamous Zodiac Killer.

The film stars not only Gyllenhaal but also Marvel A-listers Robert Downey Jr. (Iron Man) and Mark Ruffalo (Avengers: Infinity War) in powerful roles. This film will keep you guessing long past the end credits, making you wonder who the Zodiac Killer really was? Fincher does it again!

The Conversation, written, produced, and directed by Francis Ford Coppola (The Godfather) is a film about a moral dilemma. Gene Hackman (Superman) stars as surveillance expert Harry Caul, who learns that his recordings hold evidence of a potential murder.

What’s even more interesting about this film is that most believed it to be a sort of social commentary on the Watergate scandal, which had caused quite the uproar in the United States at the time. The film was released only months before President Richard Nixon resigned from office.

Based on the best-seller by Gillian Flynn (Sharp Objects), who also wrote the film itself, David Fincher’s Gone Girl is one of the best showcases of the acting abilities of Ben Affleck (Argo) and Rosamund Pike (Hostiles). Between Affleck’s stoic response to the situation and Pike’s constantly-changing tone, these two knock it out of the park.

Gone Girl is a dark and twisted story about Nick Dunne (Affleck) who becomes the prime suspect for the disappearance of his wife, Amy (Pike), after she vanishes from their Missouri home, leaving behind a lot of blood. The film is great and will take you on quite a joy ride as you discover the truth behind Amy’s disappearance.

Known as the “Master of Suspense,” Alfred Hitchcock released Rear Window nearly a decade before his masterpiece Psycho. Often considered one of the greatest films ever made, Rear Window includes some of the best acting performances from leads James Stewart (It’s A Wonderful Life) and Grace Kelly (Dial M for Murder).

The film is about a man (Stewart) who sees a potential murder take place next door and decides to keep tabs on the tenant responsible. If this sounds familiar, there’s a loose remake starring Shia LaBeouf (Fury) that was released in 2007 called Disturbia, which is actually pretty good but has nothing on the original.

All filmmakers start somewhere, and for Steven Spielberg (Jaws), well, this is it. Duel is an action-thriller in which the murder weapon is a Peterbilt 281 tanker truck. Definitely not the most ideal way to go. The film stars Gunsmoke actor Dennis Weaver as David Mann, a middle-aged salesman on his way home from a business trip who is hunted by a faceless man driving the tanker.

Weaver plays the scared salesman well as he works to out-race the rusted monster on his tail. Tensions are high as this high-speed chase continues for the majority of the film. Make sure to watch the 90 minute theatrical cut as the made-for-TV version of Duel is only 74 minutes long.

David Fincher makes his fourth and final appearance, this time with Michael Douglas (Fatal Attraction) in tow. The Game is a story about investment banker Nathan Van Orten (Douglas) who participates in a mysterious game, gifted to him by his brother (Sean Penn, Dead Man Walking). As Nathan continues through the game, he learns that there is a darker conspiracy afoot.

The Game is honestly one of the best films on this list. Its complex plot structure, foreshadowing, set design, and phenomenal casting help this less-known movie stand out among some of Fincher’s other “greatest hits.”

Often considered a “psychological horror,” The Silence of the Lambs is more of a thriller by today’s standards. The film, directed by Jonathan Demme (Philadelphia) is ripe with drama, including some of the best dialogue scenes ever filmed between two A-list actors. Anthony Hopkins’ Hannibal Lector and Jodie Foster’s Clarice Starling are two of the most interesting characters out there, who bring real gravitas to the story.

Between Clarice’s desire to succeed in the FBI, working against the clock to find serial killer “Buffalo Bill” (Ted Levine, American Gangster), and Lector’s desire to escape his captivity and get back at those who abused him, there’s a lot going on. Hopkins (The Father) delivers his greatest performance, while Foster (Inside Man) works hard to rival his commitment.

The film that put Denis Villeneuve (Blade Runner 2049) on the map. Prisoners is a story about a father searching for answers after his daughter’s abduction, which leads to more mayhem than he could have ever thought. Hugh Jackman stars alongside Jake Gyllenhaal in a ride that does what the best thrillers do best: keep you on the edge of your seat.

Villeneuve’s impeccable direction and Roger Deakins’ cinematography lead to some beautiful scenes full of raw emotion and suspense. Jackman and Gyllenhaal give the performances of a lifetime, making Prisoners one of the top “must-watch” films of the past decade.

Fallen takes an unsuspecting supernatural turn, however, as Hobbs quickly discovers there is something else behind these killings far more sinister than he initially believed. It’s an interesting film with a variety of twists, including an ending you really won’t ever see coming.