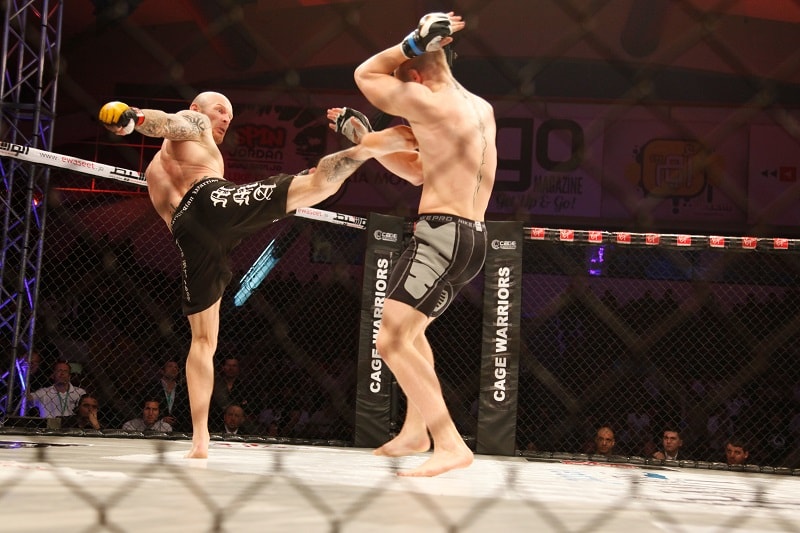 The 10 Best Knockouts in UFC History

Knockouts are a very common part of mixed martial arts, but some are a lot more spectacular than others. Over the history of the UFC, we’ve seen some that have caused huge upsets while others have just been incredible to watch.

That’s why we thought it would be fun to look at the 10 best knockouts in UFC history. We took into account not only what they looked like but other factors such as shock value and how big the fight was.

We’re sure you’ll love our list so sit back and enjoy some of the best knockouts ever. Let’s go!

This was one of the most hyped fights of all time. It was seen as a contest between the raw animalistic power of McGregor and the technically perfect and world-class MMA exponent Jose Aldo.

Many thought that the McGregor hype train was just about to be derailed. Instead, it went off into the stratosphere. McGregor showed that he was able to walk the walk, as well as talk the talk.

Even the biggest McGregor fans wouldn’t have predicted what happened, especially in a division that isn’t known for its spectacular knockouts. Most thought it was going to be a close fight but the Irishman would have other ideas.

After just 13 seconds, the highly anticipated fight was over as McGregor landed his infamous left hand on Aldo’s chin. People were expecting an epic fight but instead got to watch a stunning knockout. It wasn’t the most spectacular knockout in UFC history but given the magnitude of the fight and the time on the clock, it was one of the greatest.

This knockout is not only epic for the way it happened but also the story behind it. Masvidal went into the fight angry as in Askren’s previous fight, he won a controversial stoppage decision where the ref thought his opponent Robbie Lawler was out cold when he wasn’t.

Lawler claimed he never tapped and Askren’s gloating of the result annoyed Masvidal. He was to get his sweet revenge when the two were to fight, in one of the quickest knockouts in combat sports history.

Just before the fight, Masvidal rested menacingly against the cage with his hands behind his back, smiling at Askren. It was like that moment in a Hollywood movie where you know that the hero is just about to take everyone down.

The bell went and Masvidal charged at Askren. Knowing that his opponent would try and grapple straight away, Masvidal jumped into him, landing a knee straight into his opponent’s head. He was instantly out cold.

Masvidal managed two punches before the referee had time to scramble over and stop the contest. After he did, Masvidal tapped in the face of the unconscious Askren as retribution for his stoppage against Lawler.

Whether you love or hate Bisping, there is no doubt that he’s one of the best trash talkers ever in the UFC. Henderson was the opposite and didn’t rise to many of Bisping’s barbs.

What Henderson did do was let his talent do the talking. Going into the second round, the fight was evenly poised. Henderson then landed one of the cleanest punches ever seen in the octagon.

Bisping was out cold the moment he landed and the fight was done. His body went stiff as he hit the canvas but Henderson was able to get one big punch off before the ref could stop it.

We’ve seen with McGregor and Henderson that knockouts can be memorable because they happen so early in fights. In this contest, Rodriquez showcased how dramatic they can be at the end of the fight.

His 5-round bout against the “Korean Zombie” had already been an epic battle before he landed the knockout blow. Going into the final few seconds, it was assumed that Chan Sung Jung would be the winner on points. He must have had his doubts as with just a few seconds on the clock, he charged at Rodriguez to try and land a final strike.

Rodriguez ducked the attempted hook and while crouched, thrust his elbow straight up into the jaw of his opponent. The Korean Zombie slumped to the floor and it was one of the most dramatic fight finishes ever.

Some knockouts are on this list because of their magnitude and others because of the circumstances. This makes the list as one of the most technically perfect and brutal knockouts ever.

The fight was fairly even when Buckley tried to land a kick against the body of his opponent. Impa blocked it off and grabbed his left leg, which would usually be a vulnerable position for the opponent.

Instead, Buckley turned it into his advantage. He used the leverage from his held left leg to spin around and land a brutal kick straight into the face of Impa. Slow-mo replays showed his eyes rolling into the back of his head the moment it landed.

Buckley didn’t even check to see if he needed to finish the fight with punches, he knew it was over and walked away. It was the type of spinning kick most fighters only dream of landing.

We’ve just talked about one ridiculously good spinning kick so how about another? Barboza was known for his kicking game with his low kicks especially being something his opponents had to be mindful of.

Against Etim, however, he delivered a devastating high kick. Unlike Buckley’s which was more of a back kick, Barboza delivered a classic wheel kick which is very rare in the UFC.

The shot couldn’t have landed any more perfect with the heel. As when most kicks land flush with the head, Etim was out cold instantly and fell like a tree cut down in the forest. As with Buckley, Barboza walked away as soon as he connected, knowing the fight was done. Landing a spinning kick such as that must be such a buzz.

We’ve just seen two brilliant spinning kicks but this is a brutal knockout delivered with a front kick. Silva was in the form of his life and going into the fight had won 13 contests in a row.

His opponent was Vitor Belfort, who was a long-time training partner and the two of them knew each other very well. The first round was fairly even and Silva nearly got taken down after a missed kick. With a little less than two minutes to go, Silva attempted another kick but this time it would fully connect.

The ref should have called it instantly as Silva almost reluctantly landed a couple more punches. Due to the mutual respect between the two, Silva quickly went over to Belfort and made sure he was okay.

This is another great knockout involving Anderson Silva, but this time he was on the wrong end. We’ve already mentioned his immense reign and by the time he fought Weidman, his streak had been extended to 17 wins, 16 in the UFC. Due to that crazy streak, he was the clear favorite and looked unbeatable. As is the way with UFC, however, a lot can change very quickly.

Perhaps the reason for the loss was complacency. Silva was showboating throughout the contest and clearly thought very little of his opponent. In the second round, he had his hands down by his side, swaying away from punches. It looked great until his luck ran out. Weidman caught him with a shot and quickly finished the job. It was a huge shock and the end of Silva’s dominance.

This was another shocking knockout back in 2007 by Gabriel Gonzaga. Many fans had assumed that Cro Cop would go on to win this one and then set up a title fight against Randy Couture.

Gonzaga wasn’t just going to allow everything to go to script without putting up a fight. While he was holding his own, it was Cro Cop who had the better start to the fight and looked the likely winner.

That was until, out of nowhere, Gonzaga landed a brutal kick that flattened Cro Cop. His legs folded up from underneath him but Gonzaga managed to get in three ground punches before the referee dived in. The two would fight again eight years later but this time it would be Mirko Cro Cop winning by knockout but not quite in such dramatic fashion.

We could have easily chosen another Liddell fight in this list. He was memorably knocked out by Rashad Evans in UFC 88. In that fight, Liddell was put to sleep by the perfect right hand. For this list, however, we’ll go for a fight where he was the one dishing out the punishment. This was their second fight and in the first, it was Couture who delivered a fairly regulation knockout.

At UFC 52, Liddell would get his revenge. After a few exchanges, Couture tried to respond by pressing Liddell. The ‘Iceman’ responded by landing a perfect clean right across his jaw off the back foot. He became the heavyweight champion and would defend that belt a year later when he fought Couture for the third time. The result was to be the same with Liddell once again winning by KO.

See more about - The 10 Best UFC Fights Of All Time