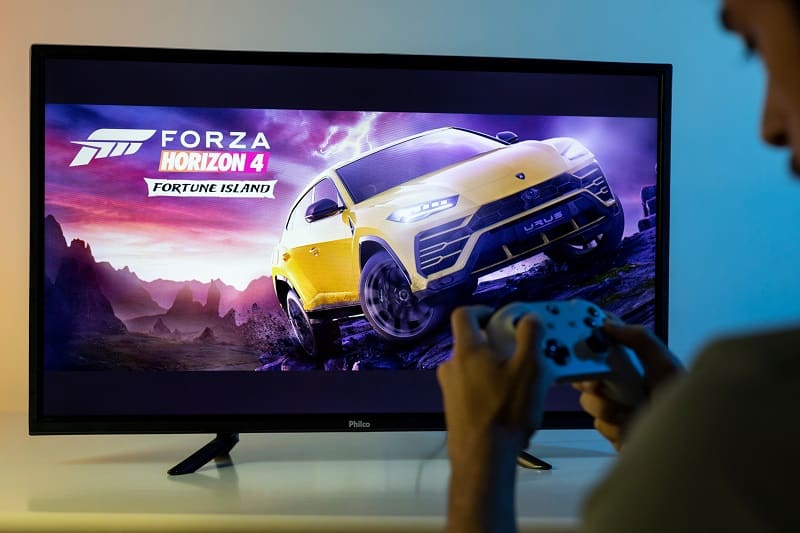 The Xbox Series X and Series S are Microsoft’s newest generation consoles. It’s the first time Xbox has released two variants with widely different price points, allowing players to pick the one they prefer. The Series S can offer the standard 1440p display resolution at 120 fps and 512 GB SSD.

Meanwhile, the Series X provides up to 4K resolution, 1 TB SSD, better hardware, and real-time ray tracing, making it a better choice overall. With the Xbox Series X, you can play any game at max settings without a hitch. To take full advantage of this, check out our list of the 10 best Xbox Series X games you can play in 2021.

The Halo series is one of the most popular video game franchises of all time. Generations of gamers have spent hundreds of hours on Halo since 2001. In 2014, Xbox Game Studios released a compilation of their most popular titles. The Halo: The Master Chief Collection console version was later enhanced and re-released for the Xbox Series X/S series in 2020.

Graphics and audio for all games are remastered as well as bug fixes to keep up with current standards while still retaining the classic gameplay that fans love. If you grew up playing classic Halo titles and upgraded to a newer Xbox console, now is your chance to play those same titles on the new Xbox Series X.

This third-person shooter is the sixth installment in the Gears of War franchise. The series was originally developed by Epic Games before being acquired by Xbox Game Studios. Soon after, The Coalition took over development for its future games, including Gears 5. This game was first released for the Xbox One and Windows but was later enhanced and re-released for the Xbox Series X.

The game’s storyline takes place almost right after the events of Gears of War 4. You will play Kait Diaz, who is an Outsider and a descendant of Queen Myrrah, leader of the Locust clan, as she journeys to learn the truth about her family and the Locust Horde. Gears 5 features a standard single-player mode, a local split-screen for up to three players, and an online cooperative mode.

Even before its release, Sea of Thieves was already one of the most anticipated video games in recent years. This pirate action-adventure was developed by Rare Limited of Xbox Game Studios and published by Microsoft Studios in 2018. An enhanced version was eventually re-released for the Xbox Series X/S in 2020.

The game takes place in a shared world where you can explore the depths of the ocean in a pirate ship and battle with other players on the multiplayer servers. You can create your own character and customize it as you go. Sea of Thieves is meant to be played in groups as well, so you can go on adventures with your friends sailing the high seas. The bigger your group, the bigger your ship will be.

There are three trading companies present in the game, with each offering a different kind of mission. You can choose from any of them. This game also combines online multiplayer with narrative gameplay. Sea of Thieves was nominated for several award categories, including Best Multiplayer Game at The Game Awards 2018. It has more than 20 million players as of March 2021.

Forza Horizon 4 is the 11th installment of the popular Forza series of racing video games. This game is also the fourth installment that uses the Forza Horizon title instead of Forza Motorsport. The franchise is known for featuring real-life vehicles and their immersive, realistic driving mechanics. It was published by Microsoft Studios for Windows and the Xbox One in 2018. A version for the Xbox Series X/S was released in 2020.

The game features several locations in a fictional version of Great Britain. You can race in areas like Cotswolds, Edinburgh, Ambleside, and the Lake District. Route customization is also a new feature, allowing you to create specialized races for you and your friends. The new dynamic weather system will affect driving mechanics, so you’ll have to learn how to drive under different weather conditions.

The Forza Horizon 4 servers can each host up to 72 players at a time, so its online multiplayer mode will be quite the experience. There are more than 750 licensed cars featured in it, making it one of the largest playable rosters from any racing video game.

Yakuza: Like a Dragon also comes from a well-known video game franchise. The Yakuza series began with Yakuza in 2005 and has since released a handful of sequels and spin-off games. The action-adventure franchise is centered around the world of gangsters and criminal organizations. Like a Dragon also follows that tradition, only it introduces the players to a new main character.

You play as Ichiban Kasuga, an associate of the Tojo Clan’s Arakawa Family, who went to prison 18 years ago for a murder he did not commit. Upon his release, he found out that his former boss and mentor betrayed the Tojo Clan and became a police informant. He ended up joining the Omi Alliance, which now controls all criminal activities in the town.

The storyline focuses on Kasuga’s journey in discovering the truth behind the betrayal and bringing justice for himself and the Tojo Clan. Its gameplay features real-time and turn-based RPG combat mechanics. You can form up to four-man teams and can take advantage of objects around you during battles.

Yakuza: Like a Dragon has sold more than 450,000 digital copies in Asia as of March 2020. It was nominated for several awards, including Best RPG at The Game Awards 2020 and Ultimate Game of the Year at the Golden Joystick Awards.

Another title from a massive video game franchise, Assassin’s Creed Valhalla was released by Ubisoft in 2020. It is the 12th main installment of the cult classic series and is the successor to Assassin’s Creed Odyssey (2018). While Odyssey was mostly set in Ancient Greece, Valhalla takes place in Ancient Scandinavia and Britain, during the time of the Viking expansion to the British Isles.

The storyline brings the focus back to the conflict between the Assassin Brotherhood and the Templar Order after Assassin’s Creed Odyssey strayed from it. In this game, present-day Assassins figure out a way to access the memories of the ancient Viking leader, Eivor Varinsdottir, to discover how his life and journey influenced the impending end of the world centuries later.

Famous historical and mythological figures like the sons of Ragnar Lothbrok and their Great Heathen Army, as well as Alfred the Great, are all part of the story. You will play as Eivor and lead your Viking clan as you take over and settle in new lands in Anglo-Saxon England. You will also have to fight different kingdoms and factions that want to drive you out of your lands.

The Hitman franchise created a whole new genre of video games. Since the first title, Hitman: Codename 47, was released in 2000, the series has successfully introduced the modern-day assassin gameplay to generations of players. In fact, it would be seven years before the next big assassin video game franchise would debut in the form of Assassin’s Creed.

The eighth main installment of the main series, Hitman 3 was developed and published by IO Interactive in January 2021. It features a third-person perspective with more polished gameplay mechanics. Hitman 3 features the conclusion of the World of Assassination storyline, which began in Hitman (2016). The semi-open world environment also allows for some exploration during most of the game.

In Hitman 3 the protagonist, Agent 47, travels to different countries with the help of his handler, Diana Burnwood, to take out targets in league with the corporate alliance Providence. Hitman gameplay is centered around stealth, disguises, and assassinations, so you will have to eliminate your targets without being noticed.

This installment was released for the Xbox Series X/S along with the Xbox One, PlayStation 4, PlayStation 5, and Windows. It received generally positive reviews from critics, including a 9 out of 10 rating from outlets like Game Informer and GameSpot.

Tetris has become an enduring video game classic thanks to its simplicity. Enhance Games continued on this path by releasing Tetris Effect for virtual reality consoles in 2018. Later, it was released as Tetris Effect: Connected for the Xbox Series X/S after being originally released for PlayStation consoles, Windows, Oculus Rift, and HTC Vive.

Tetris Effect combines the classic Tetris gameplay with themes and music, matching the game’s speed to the beat. The level system makes sure that the game’s difficulty progresses as you get better at it. It also comes with new features like a zone where you can stop the time and clear more lines quickly.

The game received very positive reviews from critics and players. Media outlets like Edge, Game Informer, and GameSpot all gave it 9 out of 10 ratings.

This first-person shooter is the fifth expansion of the cult classic, Destiny 2. The base game is a free-to-play game developed by Bungie and released for the eighth generation consoles and Windows in 2017. It was later made available for the PlayStation 5 and Xbox Series X/S in November 2020.

Destiny 2 is the sequel to Destiny and is set in a fictional universe. It follows up on the original storyline, with the player controlling a Guardian. You must protect Earth’s last standing city from various enemy factions, as well as the impending doom brought on by the Darkness.

You will also travel to Europa, Jupiter’s icy moon, to stop the Fallen Kell Eramis from using the Darkness to exact revenge on Earth. The Exo Stranger from the original campaign will return to guide you on your mission.

Beyond Light 2 and its expansions are all played in multiplayer servers but separate the player-versus-player (PvP) and player-versus-environment (PvE) missions. It borrows some elements from massive multiplayer online role-playing games (MMO) as well.

This game gained most of its popularity after content creators on the streaming platform Twitch started playing it with their peers and partners. Published by Electronic Arts, It Takes Two is a strictly two-player co-op game. It was released in March 2021 for eighth and ninth-generation consoles, which quickly became the new Twitch meta.

It Takes Two is unique in the sense that you cannot play it alone. You will need a partner to play it with, either through a local or an online split-screen. This makes it a great game for couples to try out. But be careful, as it might test the strength of your relationship.

The game features the main characters Cody and May, a couple who are headed for divorce. Their daughter, Rose, tries to save their relationship but accidentally traps them inside two dolls she made in their image. Cody and May then embark on an adventure with the help of Dr. Hakim, who is also trying to help them save their marriage.

It has sold more than two million copies since its release, with high praises and reviews from critics. Media outlets like Shacknews, IGN, and GameSpot all gave it a rating of 9 out of 10.