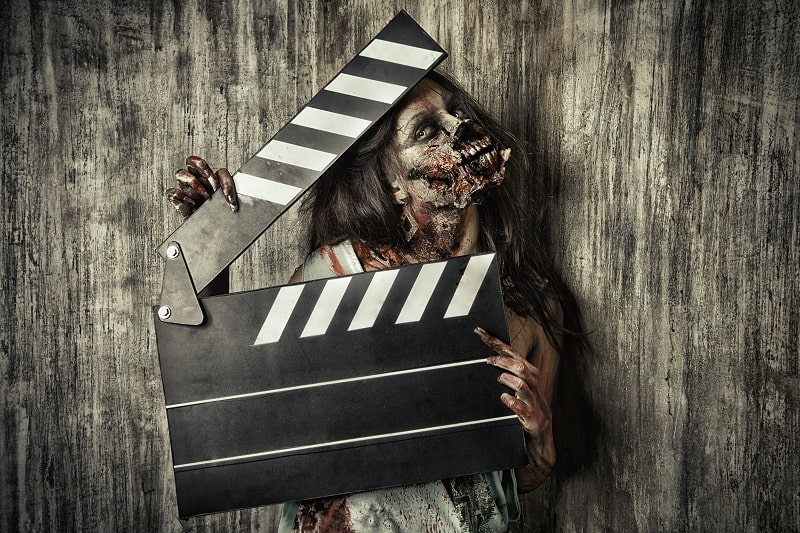 The 10 Best Zombie Movies of All Time

There’s something about zombie movies that resonates with audiences. Whether it’s watching fast-moving zombies chasing their victims or the social commentary often at play, zombie movies always seem to attract fans.

Most zombie plots start with a single infection wiping out the population, while others begin with a full-blown apocalypse causing the undead to rise. Whatever the case, they always end up with the undead chowing down on the unlucky survivors. There’s an array of zombie movies out there these days, with Netflix, Disney+, Hulu, and other streaming platforms the best place to get your fix.

You can choose from classic horror zombie movies or ones that crossover with other genres, like action, comedy, science fiction, thriller, and romance. Choosing is part of the thrill of watching horror movies, but we also know it can take a while to select the perfect film. For that reason, we have taken the initiative to narrow down the choices for you.

So if you want to piss your pants or hide behind a pillow as the bodies pile up, here are the top 10 best zombie movies of all time. Grab your snacks, popcorn, sodas, and buckle in. It’s zombie movie night.

1. Dawn of the Dead (Original)

To start, we have the Dawn Of The Dead, which is the definitive zombie movie. This classic is directed by George A. Romero and takes place in modern society under a zombie attack, featuring four desperate survivors seeking shelter inside a shopping mall. Tom Savini’s landmark gore effects are also showcased in this pure horror film.

Critics have applauded this movie because of its ode to the materialistic side of society. It was described as controversial and influential, with the zombie element slowly fading into the background of the more pressing concerns of human solidarity. A “compelling and entertaining zombie film”, this 1978 movie garnered positive ratings on movie review websites for years. It’s also part of the acclaimed Night of the Living Dead franchise, which will be mentioned below as you go through this article.

You might be familiar with the word •REC – it’s short for “record.” If you’re guessing this might have something to do with recording and cameras, you are 100 percent correct. •REC suggests you run, getaway, survive, but most importantly: keep recording.

This Spanish 2007 movie views a zombie attack from another angle. A found-footage horror film, Jaume Balagueró and Paco Plaza (directors and co-writers) reveal the events that took place in an apartment building during a firefighter intervention.

•REC became a huge success commercially, spawning a series with three sequels. Those are Rec 2 (2009), Rec 3: Genesis (2012), and Rec 4: Apocalypse (2014), directed by Balagueró and Plaza, Plaza, and Balagueró, respectively. In 2008, an American remake of the film entitled Quarantine was released. As they say, imitation is the greatest form of flattery.

3. Shaun of the Dead

Like we mentioned, you might opt for a zombie film crossed with other genres. If you’re a fan of comedy but also want to see some zombies munching on human flesh, Shaun of the Dead is a great movie to watch.

This 2004 film stars Simon Pegg as Shaun, a proverbial slacker who’s decided to be a hero by turning his mundane life around during a zombie apocalypse. Watch his adventures as he tries to save his friends and make it to the pub in this hilarious film directed by Edgar Wright.

Shaun of the Dead is one of the best horror/comedy films of all time, making it a model for crossover comedy. This film also touches on the reality of being a zombie in adult life and depicts anxiety levels that reference the post 9/11 attack.

Planet Terror is a 2007 movie by Robert Rodriquez released as part of a Grindhouse double feature alongside Quentin Tarantino’s Death Proof.  Although it fared a bit lower than the box office analyst’s expectations, the film still amassed positive reviews and has enough blood and brains to keep zombie lovers satisfied.

The movie is set in a small Texas town where a dangerous gas has turned many locals into flesh-eating zombies. There are two sets of survivors, a military unit and a group of ragtag locals who squabble with each other throughout the film. It features gross-out effects, bad dialogue, and amputee action.

There is an alternative version of this film which is supposed to make it more horrifying than it already is, which is available outside the US.

5. The Return of the Living Dead

If you’re looking for a combination of fun and terror, then you’re in for a treat with The Return Of The Living Dead. On the Fourth of July weekend, two medical warehouse employees accidentally release a death-dealing gas in the air. The vapor makes the dead rise again as zombies and terror ensures.

Director Dan O’Bannon veers away from flesh-eating zombies and introduces the concept of brain-eating zombies. This new wave of zombies featured in the Return of the Living Dead can also speak, run, and survive being shot in the head.

Another horror/comedy released in 1985, Re-Animator revolves around a medical student named Herbert West and his invention that allows the re-animation of deceased bodies.

Directed by Stuart Gordon, Re-Animator injects science fiction into the horror film genre of the 80s. This movie, inspired by H.P. Lovecraft’s Re-animator novelette of 1922, has evolved from theatrical stage production to a half-hour television pilot to a feature film.

The protagonist, Herbert West, and his classmate, Dan Cain, inject the serum into dead tissues. When the reagent delivers the expected results, conflict arises when someone else, Dr. Carl Hill, wants to take credit for their invention.

With its success, two other sequels – Bride of Re-Animator (199) and Beyond Re-Animator (2003) – have since been released. Neither are good. There’s also been two comic book series and a remake, but nothing compares to the original film.

If you are looking for a different crossover genre, the South Korean flick Train to Busan might interest you. When a zombie unknowingly slips onto a train traveling from Seoul to Busan, its passengers struggle for survival as the infected begin to multiply.

Like the Dawn of the Dead, this one also delivers social commentary and symbolism. Train to Busan sets the gears running between staged action and pure horror – all from the confines of a single-vehicle.

This movie was an immense success both in Asia – where it originates – and worldwide. Train to Busan was part of the Midnight Screenings of the 2016 Cannes Festival in France. It also broke the record as the first Korean film to reach more than 10 million theatergoers in 2016.

The sequel entitled Train to Busan: Peninsula also came shortly after in 2020. If you want less gore without compromising the thrill and horror, that one’s for you.

A Danny Boyle film, 28 Days Later is a British post-apocalyptic horror movie from 2002. With one of the boldest social commentaries seen in a horror film focusing on politics, this riveting film follows four survivors trying to pick up the pieces of a society shattered by a deadly virus.

Although the director himself did not consider 28 Days Later a zombie film, critics have praised the film for its fresh take on the genre and for having character-driven drama. The film’s overall performance, including the soundtrack, racked in millions worldwide, topping the list of profitable horror films of 2002.

9. Night of the Living Dead

George A. Romero set the bar high in directing top horror films using guerilla filmmaking techniques without the subpar quality that was common with such methods. In 1968 he directed Night of the Living Dead, which was co-written by John Russo.

Night of the Living Dead is a horror film involving seven people trapped in a rural farmhouse and attacked by cannibalistic ghouls. Because of its explicit violence and gore, the movie initially garnered negative reviews. However, this stream of reviews did not last long as the movie grew from a controversial one to a cult classic due to its cultural, historical, and aesthetic significance.

If you’re looking for more than just one zombie movie, this is a marathon you can get behind on.

This film begins with a mother who is bitten by a hybrid rat-monkey who gets sick and dies. Of course, in true zombie film fashion, the mother comes back to life to devour living creatures from pet dogs and cats to young kids and adult neighbors.

Brain Dead (or Dead Alive as it’s also known as) delivers huge doses of gore, humor, and horror all-in-one sitting. Although the movie was made on a $3 million budget and received positive reviews from critics, this Peter Jackson (yes, Lord of the Rings Jackson!) movie was initially considered a flop.

But of course, we would not include Braindead in this list if it was a bad movie. After gaining a cult following this film has become known as one of the goriest and funniest movies of all time. If you’re looking for a bloodbath with a few laughs I highlight recommend this one.

RELATED: The best post apocalyptic movies of all time