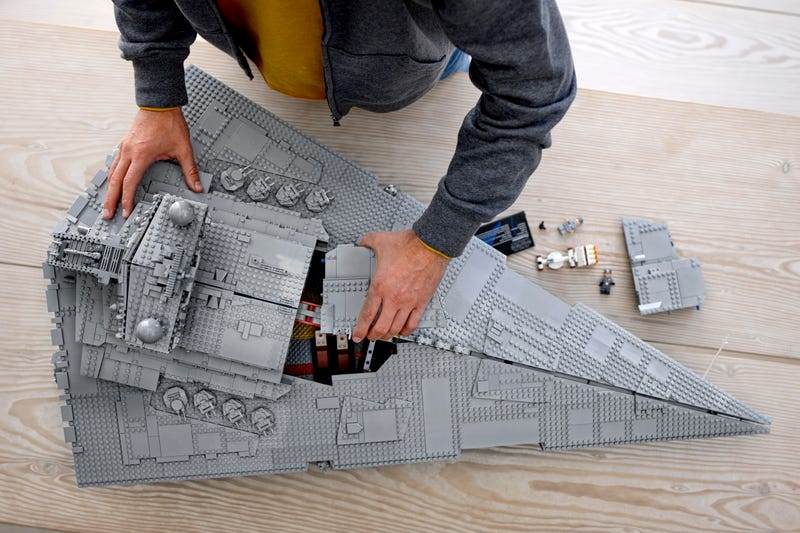 LEGO is arguably the most popular toy brand in the world. It began as a construction type of toy made up of connectable blocks that have since innovated and adapted to popular cultures throughout the decades. The interlocking of bricks to create different shapes and objects is such an iconic design many brands have tried and failed to imitate.

Since its inception in 1949, LEGO has leveraged its success into creating different video games, board games, and films. They have even opened eight massive amusement parks under the Legoland banner, scattered in famous cities around the world. But beyond all that, LEGO sets have remained the company’s bestseller.

As of 2015, more than 600 billion individual LEGO parts have been produced. If you are a LEGO connoisseur, check out our list of the 12 most expensive LEGO sets you can purchase right now. 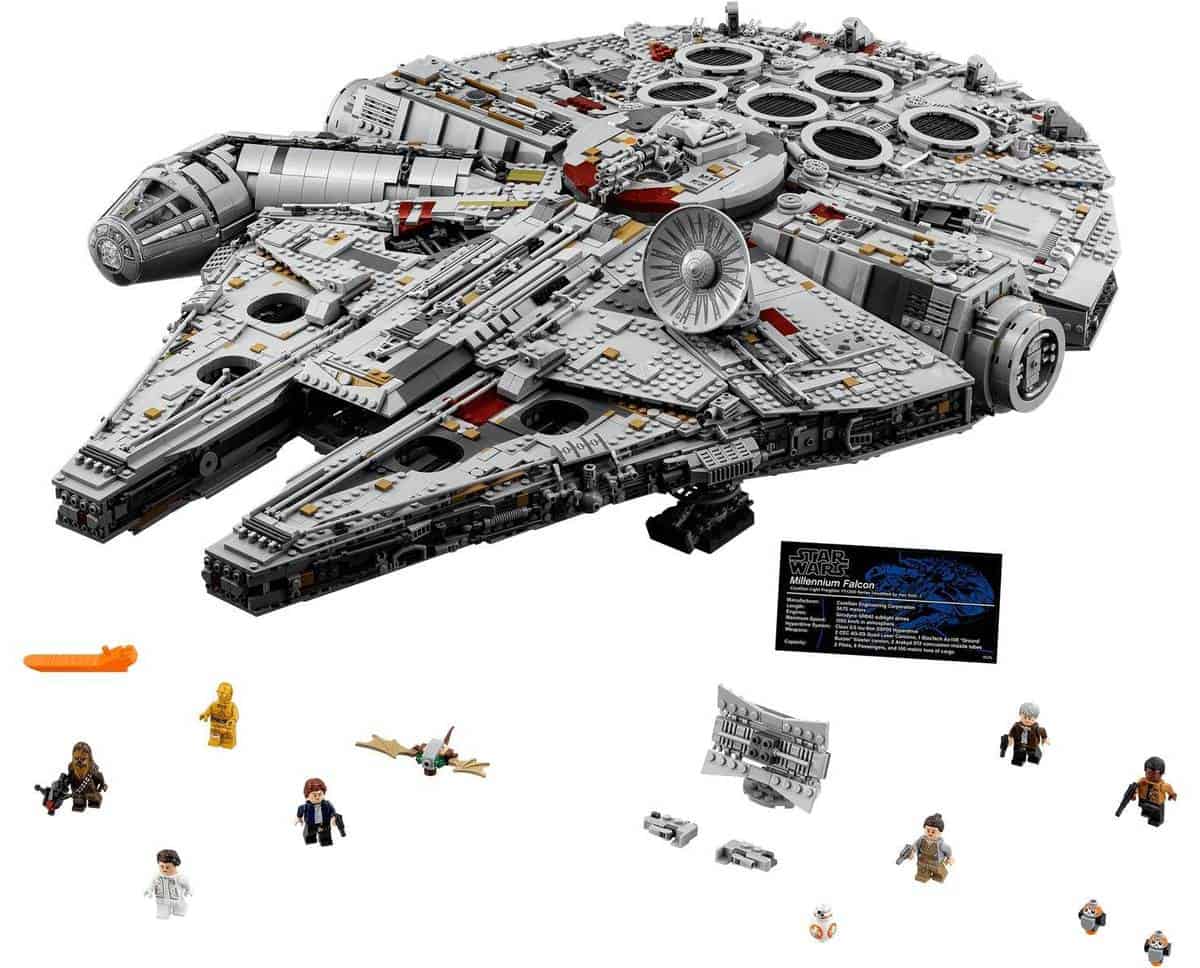 It is no surprise that the Millennium Falcon is one of the most popular LEGO sets of all time. Combining the toy giant with a multi-billion dollar media franchise is sure to make it a hit. The Star Wars series has defined several generations of movie buffs, so their fans are drawn to everything related to their favorite fictional universe.

The Millennium Falcon ranks high among the most iconic figures in the Star Wars universe. This particular set is the largest model of the famous light freighter that LEGO has created so far. With over 7,500 individual pieces, this is a piece you can build with friends or family. If you choose to build it yourself, it will definitely be a long-term project.

From the exterior to the landing gear and even the weapons, LEGO has tried to recreate every inch of the Millennium Falcon with utmost precision. Star Wars fans are very critical of the franchise’s toys, replicas, and souvenirs, so it says a lot that they seem to love the Lego Millennium Falcon so much.

This LEGO set includes mini-figures of Han Solo, Chewbacca, Princess Leia, and C-3PO. There are also bonus mini-figures of an older Han Solo, Rey, and Finn from the sequel trilogy. You will even get a BB-8 droid, a couple of buildable Porgs, and a Mynock to complete the set.

Another iconic starship from the Star Wars universe, the Imperial Star Destroyer is a name that fans are sure to recognize. This ship is often considered a rival to the Millennium Falcon because it is the most common vehicle used by the Imperial Navy and later the First Order. Fans of the dark side of the Force will definitely prefer this model to Han Solo’s light freighter.

At more than three feet long, this LEGO model of the Imperial Star Destroyer is one of the largest sets ever made. This ship is also just as detailed and accurate as the Millennium Falcon model, with more than 4,700 individual pieces. Collectors will enjoy building this set with every inch of intricate detail. It even comes with a display stand and fact plaque to make it the perfect display piece at home or in your office. 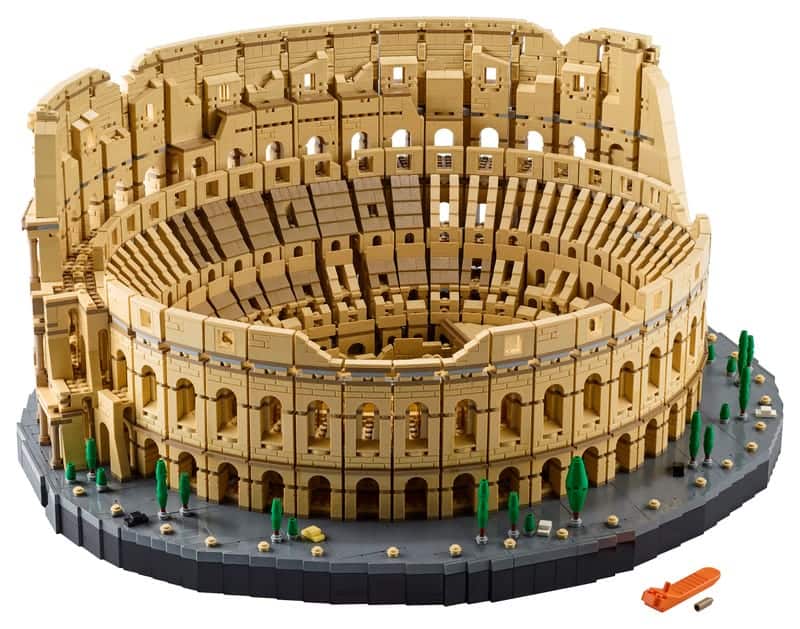 The only historical monument on this list, the Colosseum in Rome is easily one of the most popular structures in the world. This wonder of ancient architecture has existed for almost 2,000 years. It was built on the orders of Emperor Vespasian at around 70 to 80 A.D. and is still the largest standing amphitheater in the world to date. With this set, you’ll experience the thrill of building one of the true marvels of ancient architecture.

The Colosseum LEGO set recreates the intricate details of the building, from its outer columns, hallways, and stadium to its underground structure below the stadium grounds. It even includes the pavement and olive trees found outside the Colosseum.

It is the largest LEGO set ever created, with more than 9,000 individual pieces. It stands 11 inches tall and 21 inches wide, with a depth of 24 inches. Get it for yourself or for the family as a building project and new living room conversation piece. 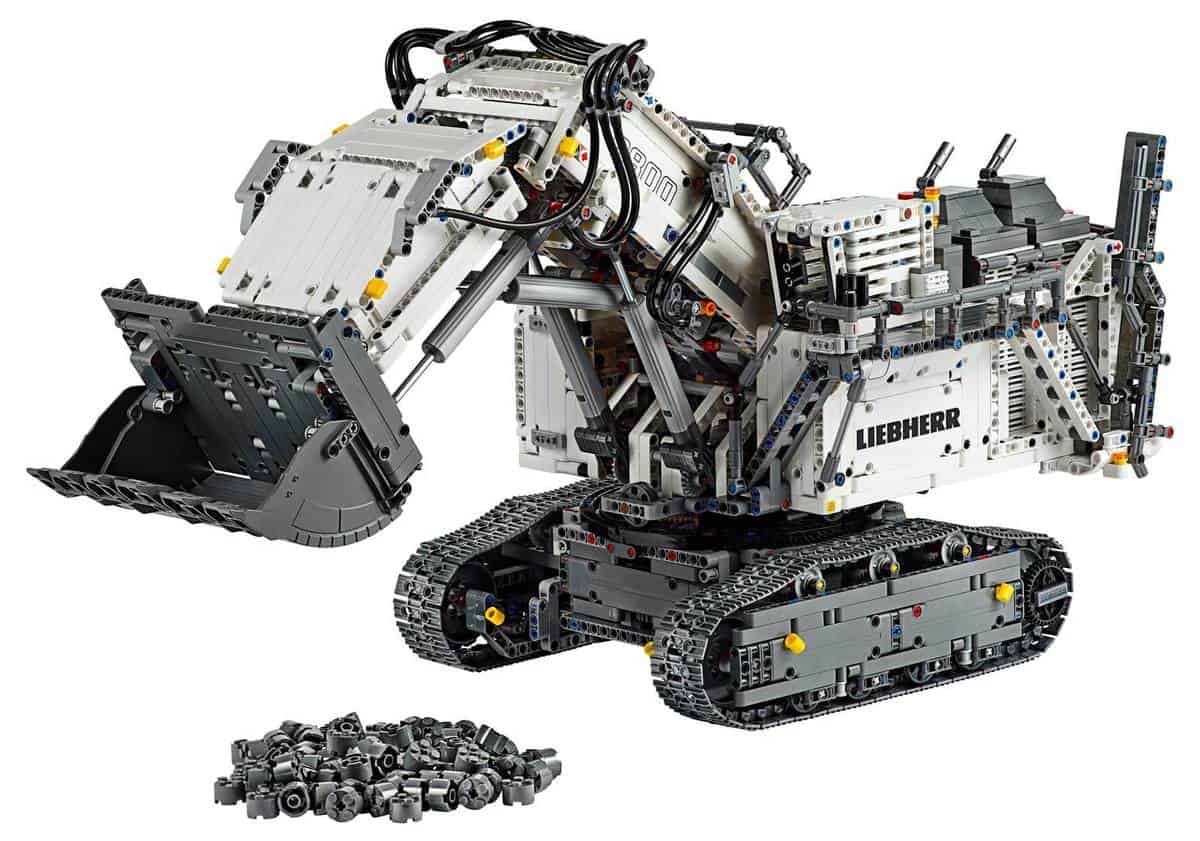 Construction equipment is not new for Lego sets, but this model separates itself from the rest with a few innovative features. The Liebherr R 9800 Excavator is a classic mining excavator used in many sites all over the world. This massive replica model is made of 4,108 individual Lego pieces.

This LEGO set is powered by two advanced Smart Hubs and seven motors, so you can operate it as the real Excavator. Granted, you’ll have to use the LEGO TECHNIC Control+ app on your smart device to operate it. The machine can rotate, the boom and bucket can operate realistically, and it can drive forward and backward smoothly.

The entire set has 3 XL and 4 large motors to emulate the actual machine’s movement. You can live out your fantasy of operating a large vehicle like this from the comfort of your own home. Have it interact with other LEGO structures and models for a more immersive experience. 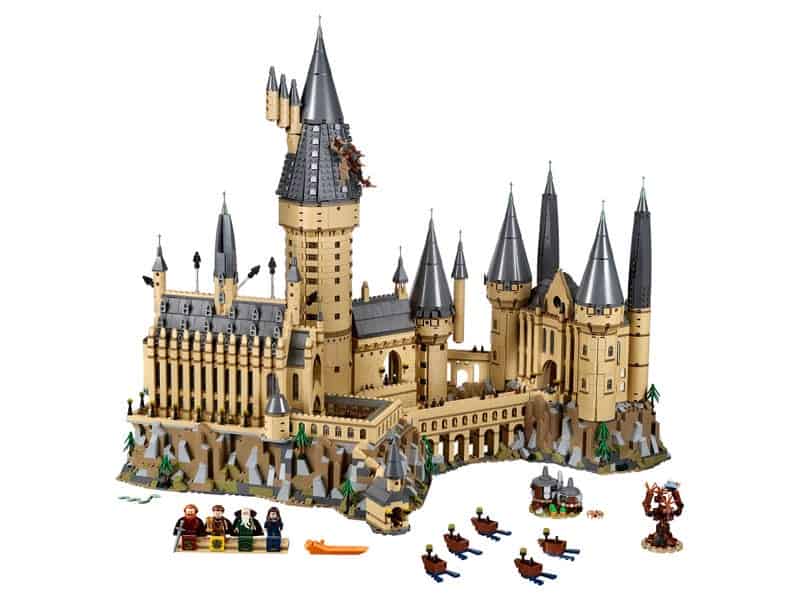 The Harry Potter franchise might be the only fictional universe that is as popular as Star Wars, so the Hogwarts Castle will certainly have its place on any list of iconic LEGO sets. Fans of the books and movies will love this massive model of what was basically Harry’s home for the entire series.

The LEGO Hogwarts Castle set is made up of 6,020 blocks, and the detailing is just as intricate as the Star Wars models. Fans will be delighted to see their beloved characters as all four founders of Hogwarts are available as micro-figures, along with 27 other characters we know and love.

Iconic locations in the school like the Whomping Willow, Great Hall, classrooms, dormitory towers, Hagrid’s Hut, and the Chamber of Secrets are also included. Slytherin’s Basilisk even shows up in the dungeons. Build this impressive model and relive every part of the magical world of Harry Potter with your friends and family. 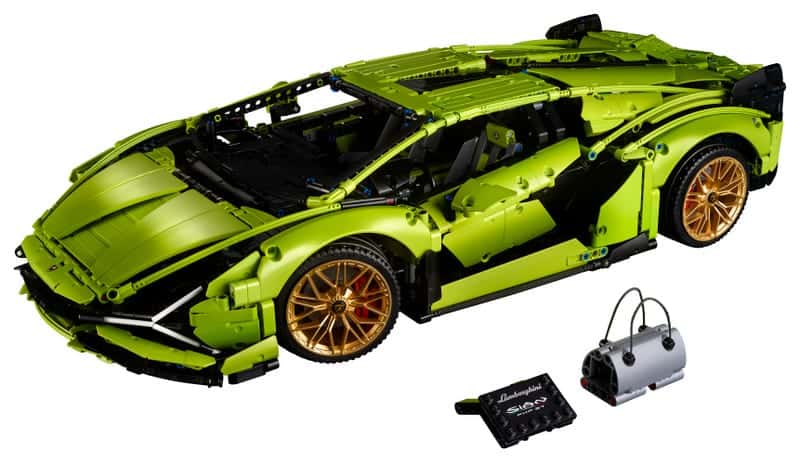 It’s no secret that LEGO makes cars and other vehicles, but the Lamborghini Sian FKP 37 is a cut above the rest. This is one of the most sought-after LEGO sets due to its rarity, price, and solid design. Its retail price is $379.99, but this particular model is worth twice as much on the resale market.

The Lamborghini Sian FKP 37 Lego set is made up of 3,696 pieces that include every little detail of the real-life supercar. It contains a working 8-speed transmission and a V12 engine with moving pistons.

It is also equipped with a realistic suspension, a movable spoiler, opening front, and rear hoods, and a working steering wheel. There is no toy car with such an immersive experience elsewhere. This is also one of the top LEGO TECHNIC sets out there, so you should definitely check it out.

See more about - The 12 Best LEGO Sets For Adults 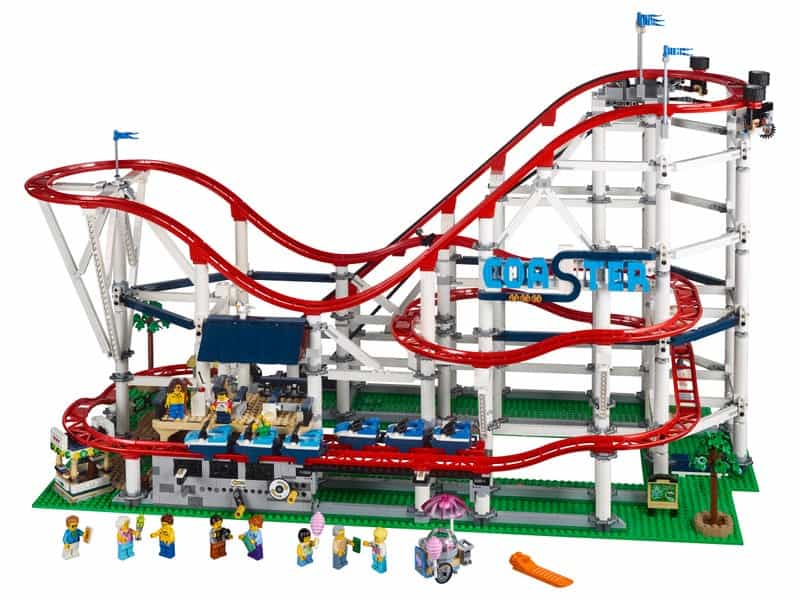 Family time is much more fun when you build and play with the LEGO Roller Coaster set.  This model is an excellent choice if you are up for a challenge.

This realistic roller coaster works on a chain-lift model that can even work with the LEGO Power Functions and LEGO Boost. The model is designed to look like an actual theme park roller coaster, including food stalls, trees, grass, and park guests. It also comes with two trains with three cars each so you can attach your favorite Lego characters to them.

11 mini-figures come with this 4,124-piece LEGO set. It is suitable for teens aged 16 and up, and kids can also help build it with the assistance of adults. Simulate a real-life amusement park starting with this exciting set. 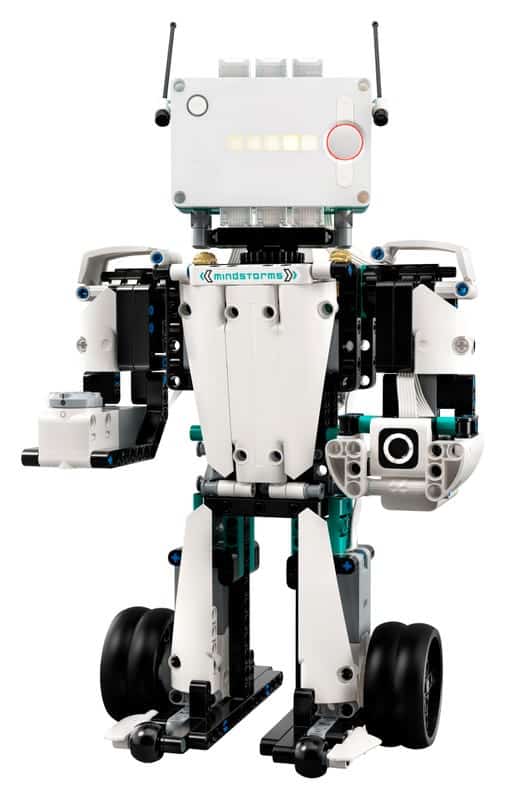 This versatile LEGO set is perfect for both children and adults who are passionate about the sciences. The LEGO Robot Inventor can be built in five different ways, each with its own unique purpose.

The Robot Inventor Blast is a humanoid robot that blasts missiles. The MVP is a functional vehicle that looks like it could explore outer space. For sports enthusiasts, Tricky enjoys playing with balls and other sporty activities.

You can make these and more with this creative and challenging set. Keep note that you should also download the LEGO Robot inventor app to see more than 50 activities you can do with your inventions. 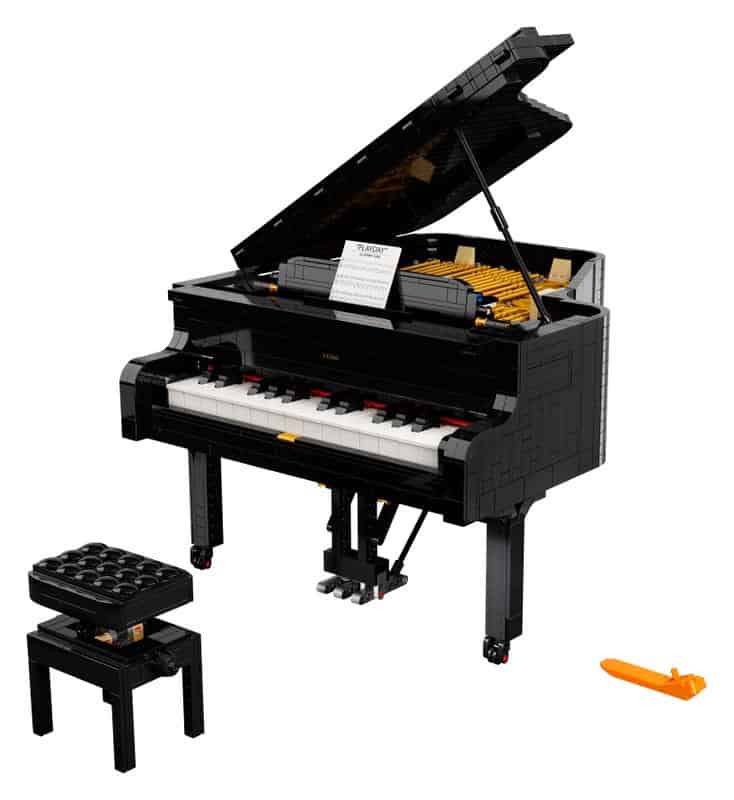 This model is easily one of the most beautiful LEGO sets available. The Grand Piano is made of 3,662 individual pieces, including 25 piano keys that are each connected to a hammer so you can actually play it like a real piano.

This cool feature enables you to play songs like a brilliant pianist on a big stage. You can even connect this to the LEGO Powered Up app and have it play a song for you.

The LEGO Grand Piano has all the intricate details of a real-life grand piano, including a removable top cover, an adjustable bench, and moving pedals. This beautiful piano is the perfect display piece in your living room if you do not have enough space for a real one. It is suitable for ages 18 and up. 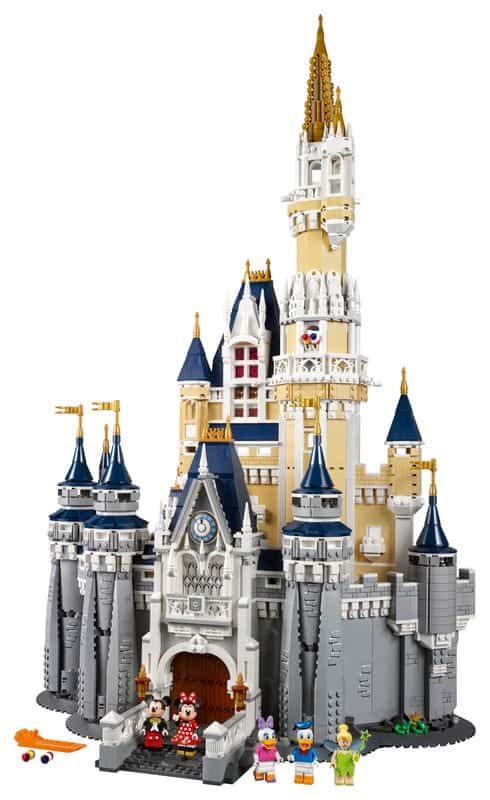 Another iconic structure fans of all ages will instantly recognize at first glance is the Disney Castle. It looks exactly like the real castle you would find in Disneyland and in Disney films.

This large set includes details from the best Disney films in every room, as well as a mysterious secret compartment for your magical fantasies. You can live out your favorite Disney scenes with all the elements and characters in this castle. The LEGO Disney Castle set also comes with Daisy Duck, Donald Duck, Mickey Mouse, Minnie Mouse, and Tinkerbell mini-figures.

The first Marvel set on our list is the Daily Bugle model. This building is the location of many iconic Spider-Man scenes from the comics and movies. It also features some elements of New York City, like a sidewalk newsstand, a water tower, and a yellow taxi.

The Daily Bugle LEGO set includes your favorite characters like the Green Goblin, Doctor Octopus, Venom, Sandman, and of course, Spider-Man and Peter Parker. There are 25 mini-figures in total that come with this set so you can recreate just about any scene on this iconic building from your favorite Spider-Man movie.

It is built with 3,772 individual blocks and pieces. At over 32 inches tall, 10.5 inches wide, and 10.5 inches deep, the Daily Bugle is the biggest LEGO Marvel set ever created. 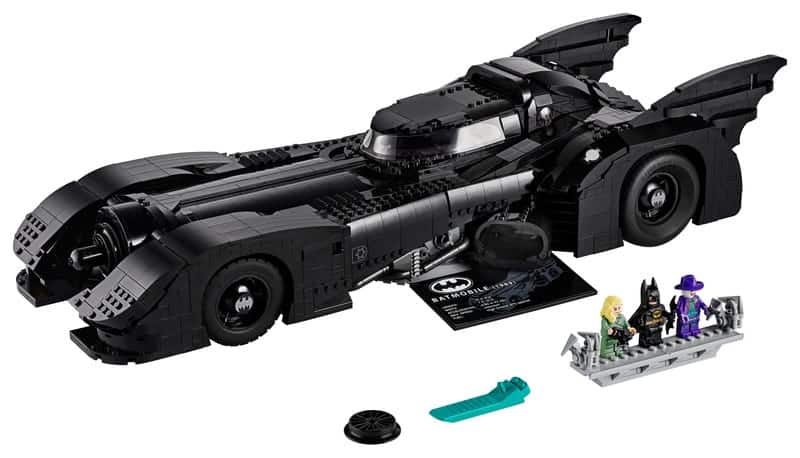 A classic superhero item, the 1989 Batmobile is one of the most popular DC LEGO sets ever. This is a massive throwback to the 1989 Batman movie starring Michael Keaton and Jack Nicholson.

This very detailed Batmobile model includes all the elements that fans will recognize. The slide-open cockpit shield and realistic two-seater cockpit are perfect for placing your favorite superhero mini-figures inside.

It even has pop-up machine guns and grappling hooks so you can recreate the best action scenes from the caped crusader’s comics, movies, and shows. The 1989 Batmobile set also comes with Batman, The Joker, and Vicki Vale mini-figures.