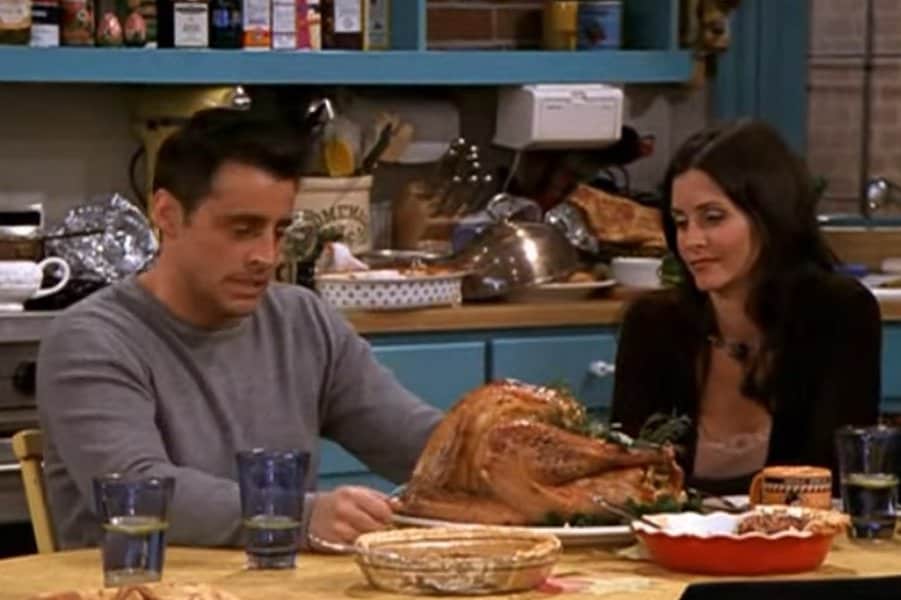 On September 22, 1994, the beloved sitcom Friends debuted on NBC and soon became one of the most popular shows. The series exploded in popularity, becoming a cultural phenomenon influencing television, fashion, and hairstyles. It followed the lives of six best friends living in Manhattan as they struggled with relationships, careers, and friendships. After ten seasons, the finale episode aired on May 6, 2004, to universal praise.

The episodes also started long-running jokes like Chandler hating Thanksgiving or pretending to watch the football game. They usually were the funniest episodes featuring chaos, guest stars, and turkey dinner. For the most part, all major sitcoms would do a Thanksgiving episode, but none were on the same level as Friends. Here are the 10 best Friends Thanksgiving episodes ranked. 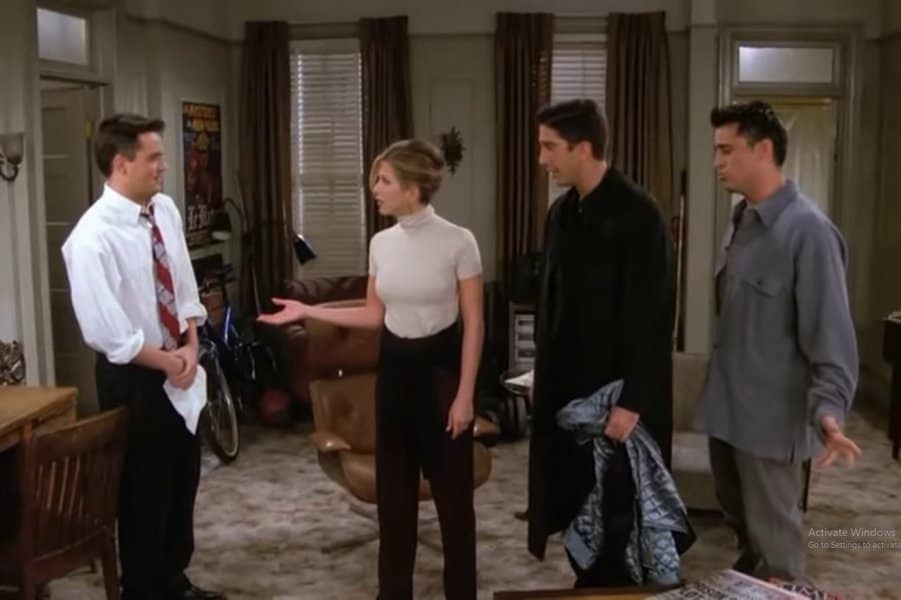 The main plot follows Ross as he tries to make up with Rachel for writing the infamous list comparing her to Julie. At this point, the series revolved around their long-running love story. The only connection to Thanksgiving is Monica trying to impress her new boss with mockolate recipes. The company’s plan is for mockolate to be associated with Thanksgiving. It’s easily one of the least popular Thanksgiving episodes. 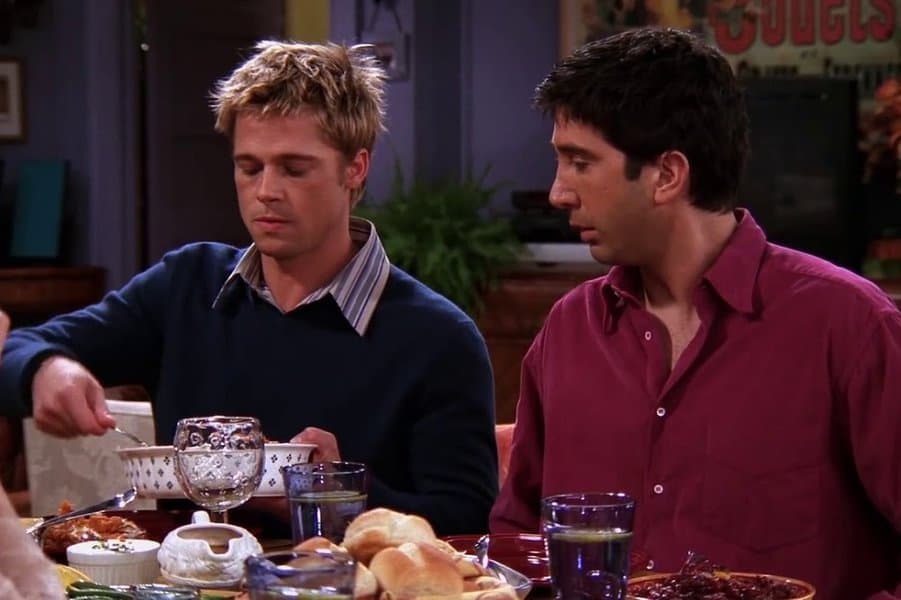 Friends had a reputation for featuring the biggest Hollywood stars in guest roles. In 2001, nobody was more famous than Jennifer Aniston’s then-husband Brad Pitt. In “The One with the Rumor,” Pitt’s character, Will Colbert, joins his old high school friends Ross and Monica for dinner but opens up a can of worms.

It turns out that Will hated Rachel Green so much in high school he started an “I hate Rachel” club with Ross. Soon, Ross and Rachel reveal shocking rumors about each other. More importantly, Joey tackles his Everest, eating an entire turkey prepared by Monica.

8. The One Where Chandler Doesn’t Like Dogs (Season 7, Episode 8) 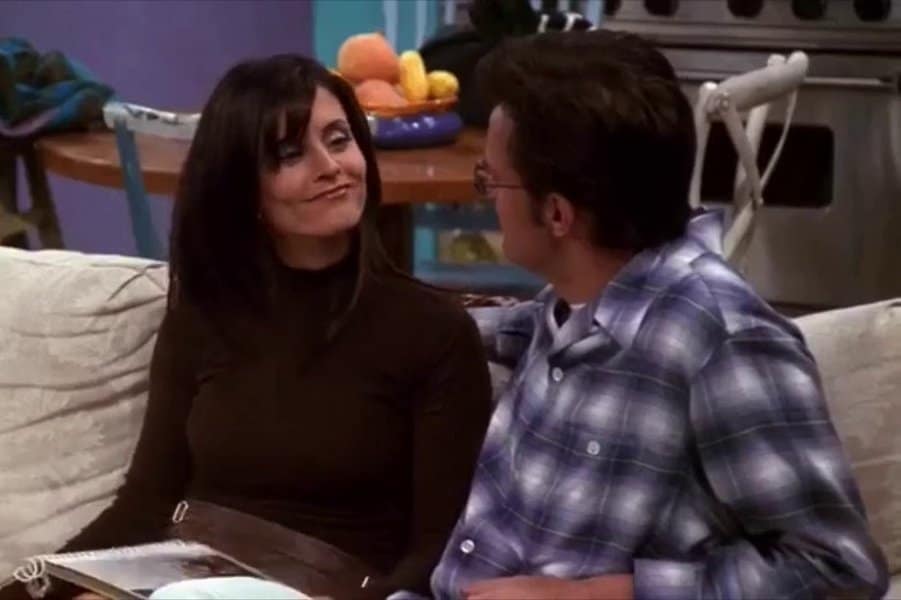 The Best of TV Shows/YouTube

Chandler features heavily in many of these holiday-themed episodes despite his hatred for Thanksgiving. In “The One Where Chandler Doesn’t Like Dogs,” Phoebe reveals that she’s secretly caring for a dog while staying with Monica and Chandler. Chandler admits he has issues with dogs. He claims he’s allergic, but he just doesn’t like them.

The other storylines follow Rachel’s assistant and crush, Tag (portrayed by Eddie Cahill), joining them for dinner when his girlfriend dumps him. The episode often ranks low as a favorite Thanksgiving episode. 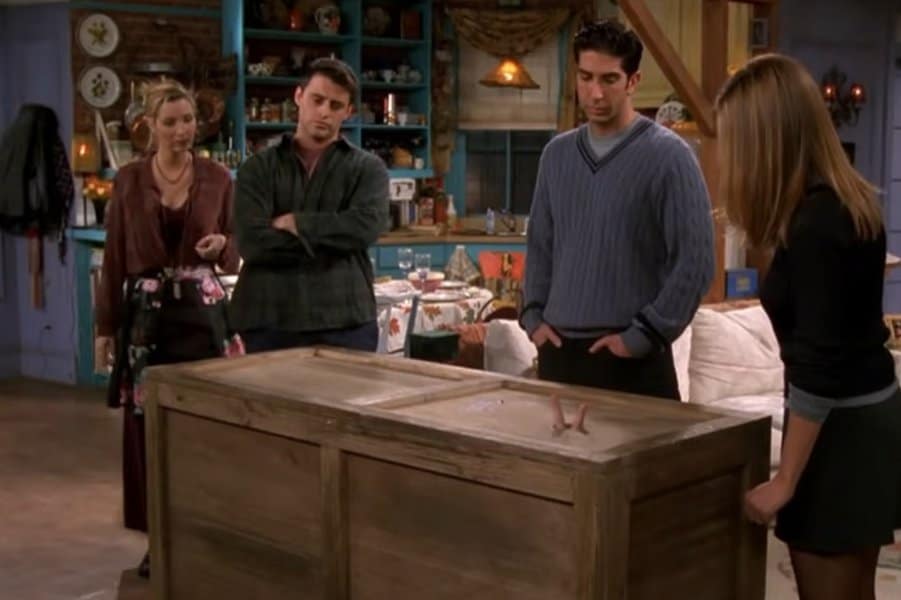 Joey Tribbiani (portrayed by Matt LeBlanc) and Chandler Bing always had a tight bond. However, they had a few historical fights in the series. Nothing tested their friendship more than Chandler falling in love with Joey’s girlfriend Kathy.

After Chandler kisses Kathy, Joey makes Chandler sit in a box as punishment in “The One with Chandler in a Box.” In the subplot, everyone finds it strange that Monica invited her eye doctor over for dinner because he’s her ex-boyfriend Richard Burke’s son. 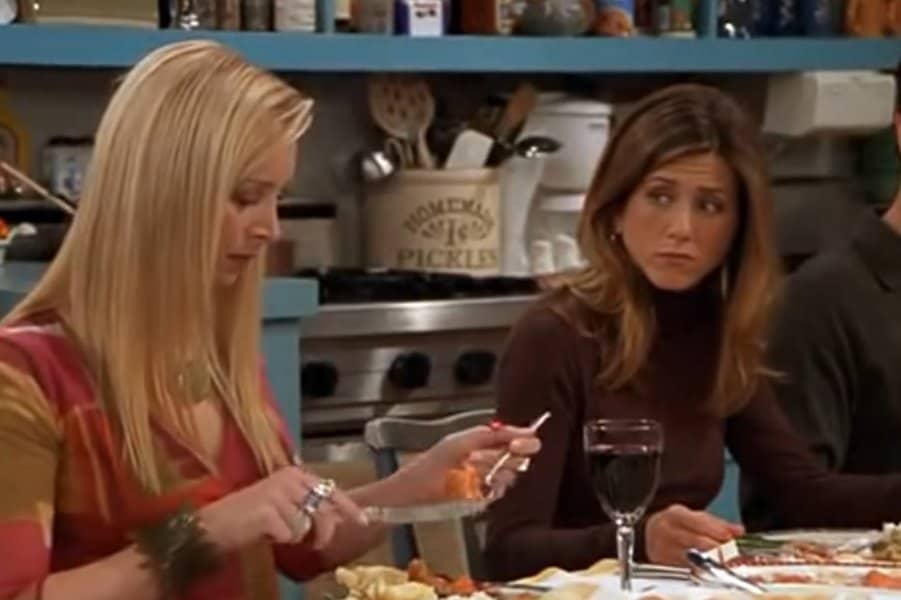 In “The One with Rachel’s Other Sister,” Chandler convinces a hesitant Monica to use the wedding china for dinner. He soon regrets his decision. Portrayed by Christina Applegate, Amy Green visits her sister and niece for Thanksgiving. However, she becomes enraged when she discovers that Rachel and Ross didn’t pick her as Emma’s legal guardian.

As one of the funniest episodes in the series, it climaxes with Amy and Rachel getting into a hilarious physical fight. In an emotional moment, Chandler proves he would make a good guardian for Emma. He then accidentally breaks the wedding china.

See more about - The 10 Best TV Shows About Monarchy

5. The One With the Late Thanksgiving (Season 10, Episode 8) 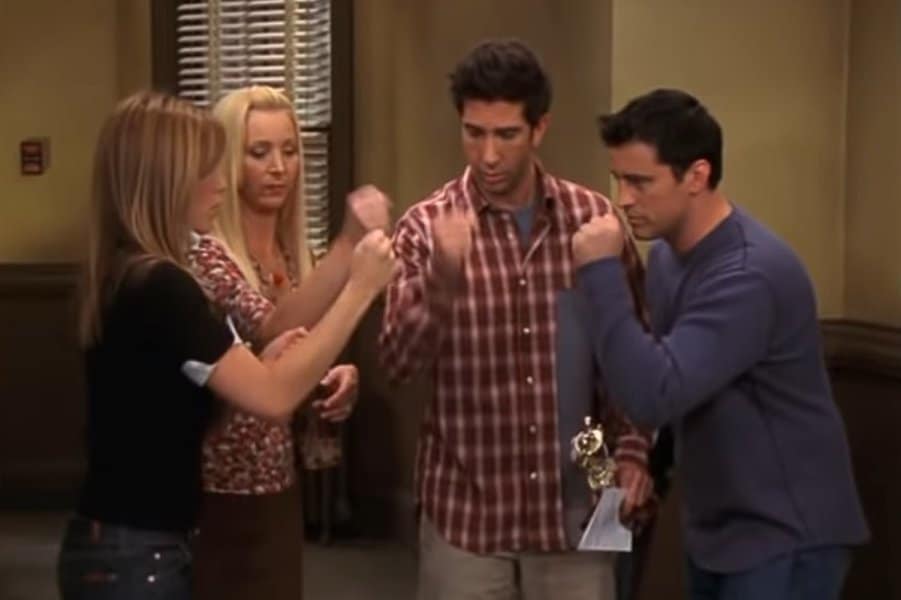 After insisting that Monica and Chandler host Thanksgiving, Ross, Rachel, Phoebe, and Joey all show up late. Chandler and Monica are so angry that they won’t let them in the apartment. The hilarious episode “The One with the Late Thanksgiving” features the four friends arguing in the hallway about being late, entering Emma in a beauty pageant, and Joey’s giant foam finger.

Famously, the four friends stick their heads through a crack in the doorway. However, Joey gets his head stuck in the door before destroying all the food. After all the hijinks and sight gags, it ends with a touching moment when Chandler and Monica discover the lady from Ohio who chose them to adopt her baby.

4. The One Where Underdog Gets Away (Season 1, Episode 9) 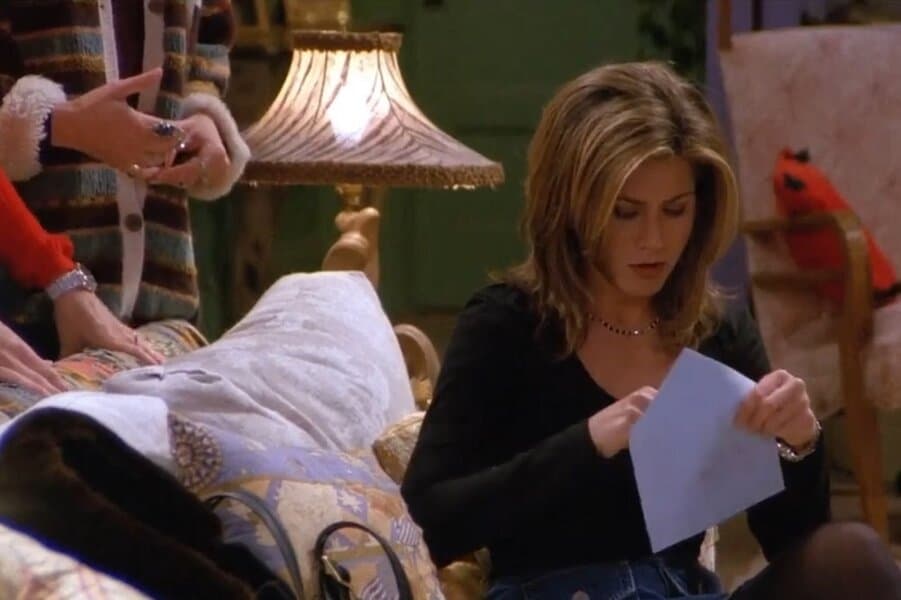 The first season of Friends also featured the first Thanksgiving-themed episode. “The One Where Underdog Gets Away” established one of the show’s longest-running gags of Chandler hating Thanksgiving. Creating the blueprint for future Thanksgiving episodes, the episode focused on various storylines like Joey’s embarrassing poster, Rachel’s ski trip, and Monica making three different kinds of mashed potatoes.

After Chandler informs the group that the Underdog float got away from the Thanksgiving Parade, the group runs to the roof. Unfortunately, they get locked out of the apartment. With the food burned and everyone’s plans falling through, the group comes together to enjoy a Thanksgiving dinner featuring grilled cheese sandwiches.

3. The One With All the Thanksgivings (Season 5, Episode 8) 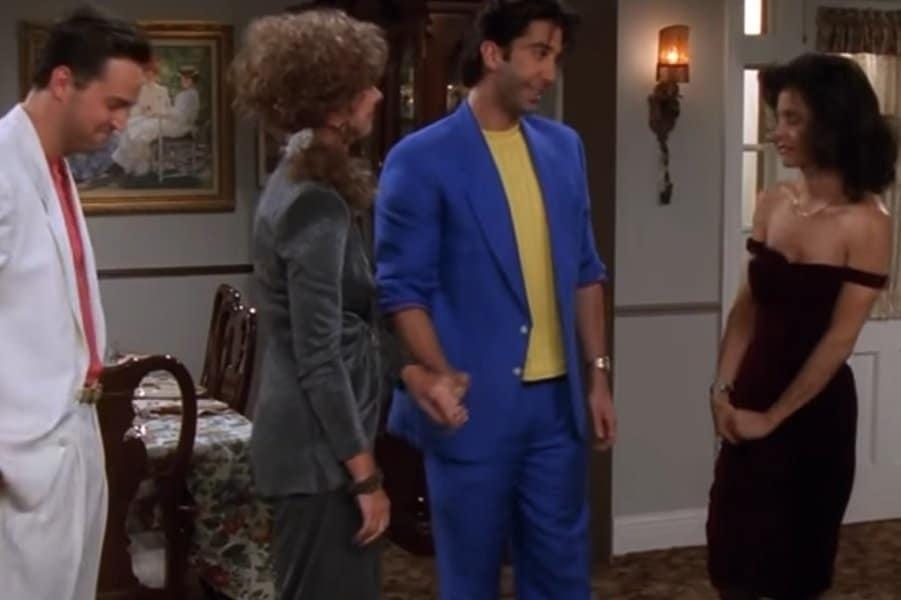 Told in flashbacks, “The One with all the Thanksgivings” revolves around Chandler (portrayed by Matthew Perry) and Monica’s history. After a delicious turkey dinner, the group sits around trading classic Thanksgiving stories, like when Phoebe lost both arms in past lives, Chandler found out his parents were divorcing, and Joey got a turkey stuck on his head.

The flashbacks are famous for Ross, Rachel, Chandler, and Monica portraying younger versions of themselves at different times. After a young Monica hears college student Chandler calling her fat, she loses a ton of weight to make him jealous the following year. She also cuts off his pinky toe. In one of the show’s most memorable moments, Monica apologizes to Chandler wearing a turkey with sunglasses on her head. 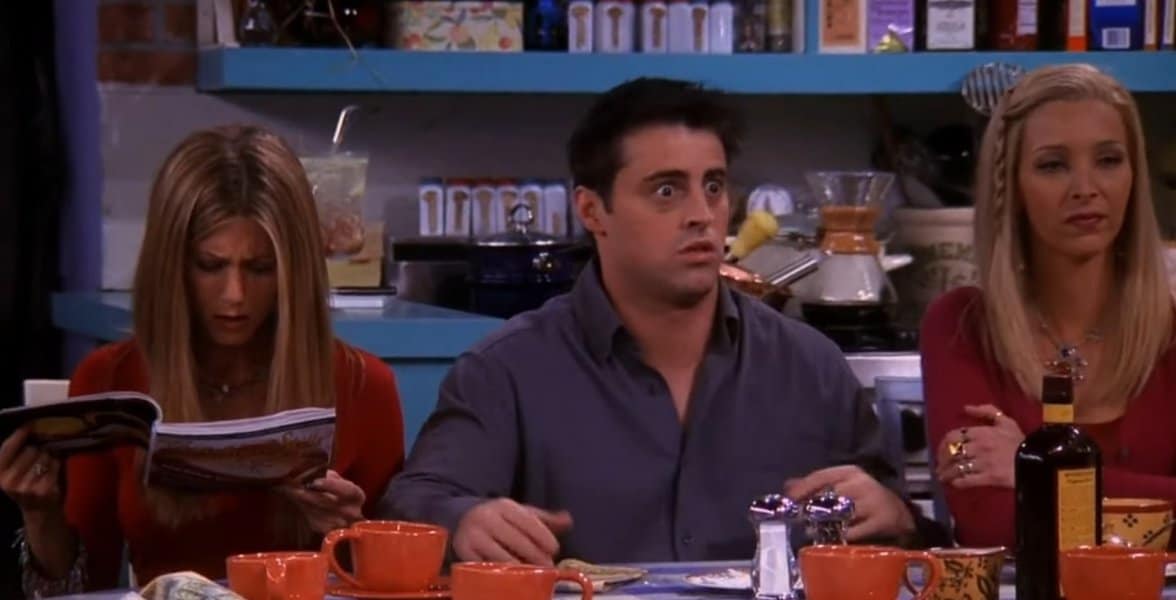 Arguably one of the best episodes in the show’s history, “The One Where Ross Got High” features some of the most memorable Friends moments. Monica reveals she hadn’t told her parents, Jack and Judy Geller, she was living with Chandler because they hate him. It turns out that Ross smoked pot in college but blamed Chandler when his parents caught him.

Famously, Rachel screws up the English trifle by making half a dessert pie and half a shepherd’s pie. Regardless, Joey and Ross are so desperate to celebrate Thanksgiving with a dancer and her friends that they’ll eat anything. Like all classic Friends Thanksgiving episodes, it culminates with pure chaos with Phoebe screaming out that she loves Jacques Cousteau. 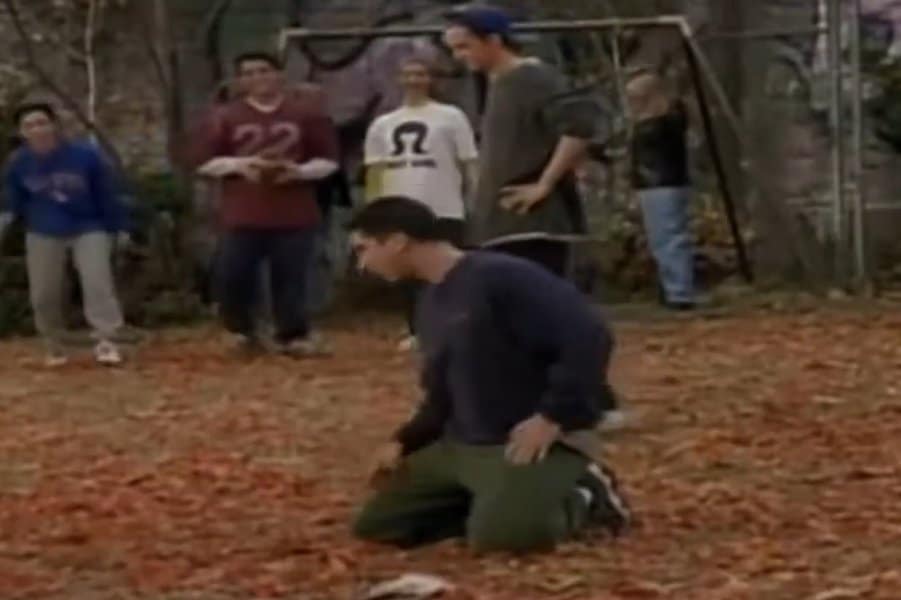 Often considered the best Thanksgiving episode, “The One with the Football” set the bar high for future episodes. The bottle episode takes the group out of the apartment and in a nearby park as they play a friendly game of football. That’s when Ross and Monica’s famous sibling rivalry becomes the focus.

Portrayed by David Schwimmer and Courteney Cox respectively, Ross and Monica will do whatever it takes to win the famed Geller Cup. Although the prestigious Geller Cup was just a Troll doll nailed to a two-by-four. At the same time, the other characters’ storylines tie into the main story, all the while Monica’s cooking dinner in the apartment. The episode ends with one of the series’ most iconic visuals of Ross and Monica clinging to a football.

See more about - Worst TV Show Endings Of All Time