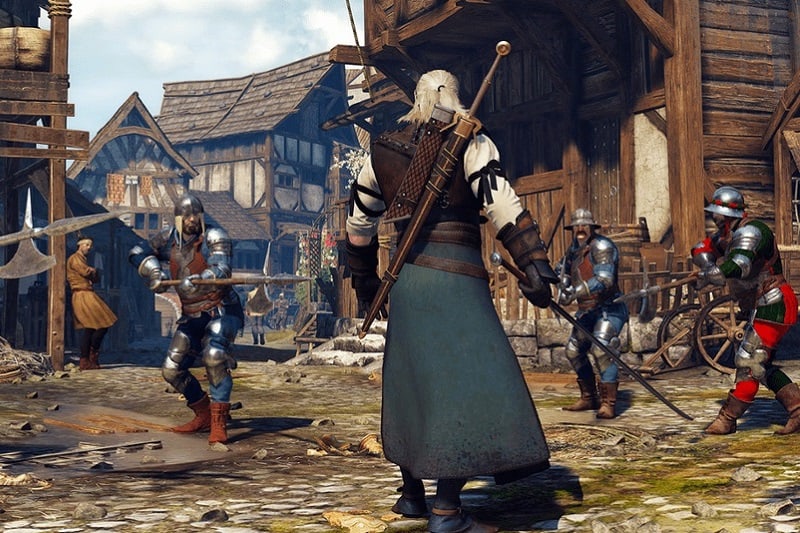 10 Must Play Games for Fans of ‘Skyrim’

The Elder Scrolls V: Skyrim is one of the most popular games in the world. Although it was released in 2011, the fifth main installment of the Elder Scrolls video game franchise remains a top game in most lists. It is famous for its sandbox gameplay and endless gaming possibilities that often make players take years to finish.

Over the years, players and developers have created hundreds of mods that enhance the experience of creating characters, environments, items, clothing, and abilities. Some mods can feel like you’re playing an entirely new game, so you don’t have to stick to the game’s original storyline if you have already completed it.

If you enjoyed your time in Skyrim, check out our list of the 10 must-play games for fans of Skyrim.

Arguably the most popular massive multiplayer online role-playing game (MMORPG) to date, World of Warcraft has established itself as a dominant force in the gaming industry since it was first released in 2004. Developed and published by Blizzard Entertainment, the game is set in the fantasy universe of the Warcraft franchise. Although the game is almost 20 years old, Blizzard releases expansion packs every few years to keep the gameplay, graphics, storylines, and characters fresh and dynamic for all players.

Just like most MMORPGs, World of Warcraft allows you to create a character avatar from various races and classes of the game’s universe. The game can be played from a first-person or third-person point of view. You are able to go on adventures, complete quests, battle various monsters, and interact with other players. There are also Normal and Roleplay servers, so you are free to choose, depending on your style of play.

World of Warcraft is estimated to have more than 110 million subscribed players in total, with about one million players logging in per day. With the Shadowlands expansion pack release in 2020, the game has had a resurgence in hype and patronage. The next expansion pack is set to be launched in 2022.

A favorite game of the 2010s, The Witcher 3: Wild Hunt is as good as it gets. Developed and published by CD Projekt Red, it is the third installment of the Witcher series that is based on the collection of fantasy novels written by Polish author Andrzej Sapkowki. It was first released in 2015 and is currently available on the PlayStation 3, PlayStation 5, Xbox One, Xbox Series X and S, Nintendo Switch, and Microsoft Windows.

Wild Hunt is set in a fictional world based on Slavonic mythology. You play as Geralt of Rivia, a monster hunter who is also called The Witcher. Geralt is looking for his missing daughter while he is also being chased by the mythical Wild Hunt. Gameplay includes melee or magic combat, abilities, and different types of movement mechanics.

For the attack mechanics, you have the option for light and quick attacks or slow and strong heavy attacks. There are a wide array of weapons you can use, including swords, crossbows, and bombs. Swords in particular have limited endurance so you will have to repair them from time to time. There are five magical signs that Geralt can use to give him different powers and abilities. Critics and players have praised the game for its gameplay, storyline, world design, mechanics, and optimization.

Demon’s Souls is a cult classic action-adventure video game developed by FromSoftware and released in 2009 for the PlayStation 3. It is sometimes known as the spiritual successor to the popular King’s Field series from the same developers. This game also produced a whole franchise that is now more commonly known for the Dark Souls installments of the series.

Set in the fictional kingdom of Boletaria, the world is seemingly consumed by a dark being known as the Old One. You are brought to the kingdom and are tasked to pacify the Old One by killing the fallen king Allant. Players can fully customize their character’s gender and appearance before starting the game. You can also choose from several character classes, which vary in terms of base stats.

Throughout the story, you will navigate five different worlds from a hub called the Nexus. Every world is divided into four areas, each with a unique boss that you must defeat. There are 22 bosses in total, including the Real King Allant. Combat mechanics rely on weapon strikes, blocks, and movement. The stamina bar limits the number of actions you can do consecutively.

The game was remade by Bluepoint Games for the PlayStation 5 in 2020. Demon’s Souls was released as a launch title for the console.

Another classic game on our list, Baldur’s Gate 2: Shadow of Amn is the sequel to 1998’s Baldur’s Gate. This role-playing game was developed by BioWare and published by Interplay Entertainment in 2000 for Microsoft Windows. It was then made available for Mac OS the following year.

The game is set in the fantasy world of the Forgotten Realms and is inspired by the Advanced Dungeons & Dragons 2nd Edition rules. Its unique isometric perspective and pausable real-time gameplay stand out from most RPGs of its era.

You play as the protagonist, Gorion’s Ward, who is carefully being watched by the powerful wizard Irenicus. Through your character, you will take control of a party of five other characters. You can fully customize your character’s class, ability points, appearance, and alignment. The main quest of the game takes about 50 to 60 hours to complete. If you want to finish all the side quests as well, the game is estimated to take more than 200 hours of gameplay.

Baldur’s Gate II: Shadows of Amn has sold more than two million copies worldwide. Its massive success also led to the release of an expansion pack, Throne of Bhaal, and an Enhanced Edition in 2013.

Set in an open world environment, this action role-playing game (RPG) allows players to go on quests, interact with non-playable characters (NPCs), hunt monsters, and explore the province of Cyrodiil. The open-ended gameplay is also unique for games of its kind. You can keep playing and exploring the world even after you have completed the main storyline.

Oblivion takes place in the Third Era, around six years after the events of The Elder Scrolls III: Morrowind, but its storyline does not follow the events of the previous installments. This game was praised by critics as one of the best games during its release year. It has sold more than 9.5 million copies worldwide since.

Released in 2018, this action role-playing game was developed by Warhorse Studios and published by Deep Silver. Kingdom Come: Deliverance was made available for the PlayStation 4, Xbox One, Nintendo Switch, Amazon Luna, and Microsoft Windows.

The game is set in the medieval Kingdom of Bohemia in 1403. Bohemia is an Imperial State of the Holy Roman Empire and is ruled by King Wenceslaus IV. You play as Henry, whose family and townspeople are massacred by mercenaries hired by the Hungarian King Sigismund. The storyline follows Henry as he joins the resistance movement and seeks revenge for his people.

The open-world environment, historical accuracy, combat mechanics, and immersive gameplay all contribute to the experience in Kingdom Come: Deliverance. The game received positive reviews from critics and players, including an 84 out of 100 rating from PC Gamer (UK). It has since sold more than three million copies worldwide.

One of the most popular RPGs in recent years, Dragon Age: Origins is a product of BioWare and Electronic Arts. The first installment of what would become the Dragon Age franchise, Origins was released in 2009 for the PlayStation 3 and Xbox 360.

The game is set in the fantasy kingdom of Ferelden where there is a civil war between races and groups looking to gather power for themselves. You can choose to be part of the elven, human, or dwarven race and pick one of three character classes.

Being a warrior, rogue, or mage comes with unique skills and abilities. Warriors are skilled at strong physical attacks, rogues are great at stealth attacks and thievery, while mages cast different spells and support their teammates. With third-person perspective gameplay, you go through the world trying to defeat the Archdemon, who is the leader of the evil forces known as Darkspawn.

Dragon Age: Origins received overwhelmingly positive reviews from media outlets shortly after its release. GameSpot gave it a 9.5 out of 10, while Giant Bomb awarded it a perfect five stars.

Fallout 4 is the fourth main installment of the very popular Fallout series. It was developed by Bethesda Game Studios and published by Bethesda Softworks for the PlayStation 4, Xbox One, and Microsoft Windows in 2015.

The game is set in a post-apocalyptic version of Massachusetts that is now known as The Commonwealth. Famous landmarks like Bunker Hill, Old North Bridge, and Fort Independence all make an appearance in this open-world environment.

The game’s events take place in the year 2287, about 10 years after the story of Fallout 3. The Great War has caused nuclear devastation in the entire United States, and the survivors are fighting for the few resources that are left. You play as the Sole Survivor, whose spouse was murdered and child was taken away. Your goal is to explore the Commonwealth in search of your son.

You can complete quests, fight enemies, help out factions, and improve your character through leveling up and enhancing your abilities. For the first time in the series, you are now also able to develop and manage settlements and craft drugs and explosives from scavenged materials.

Horizon Zero Dawn is known to some players as the mecha version of Skyrim. Instead of the medieval and magical themes of the latter, this game is set in a world overrun by machines. Developed by Guerrilla Games and published by Sony Interactive Entertainment, it was released in 2017 for the PlayStation 4 and Microsoft Windows.

This third-person perspective action RPG follows the main character, Aloy, as she explores the world in an attempt to find answers regarding her past. As a hunter, you can use both melee and ranged weapons, as well as stealth mechanics to defeat your enemies. There is also a skill tree that you can use to develop your abilities and stats using experience.

You can set traps, shoot enemies with arrows, or use explosives to take out several at once. Crafting is also a major element in the game, as you need to craft your ammo, pouches, quivers, medicine, and traps using different resources that you can scavenge.

10. The Legend of Zelda: Breath of the Wild

One of the most highly anticipated video game titles in the last five years, The Legend of Zelda: Breath of the Wild was released for the Nintendo Switch and Wii U in 2017. The Zelda franchise has remained a cult classic since the original game took the world by storm in 1986.

Breath of the Wild is the 19th installment in the series and features the iconic protagonist Link, who wakes up from a century-long slumber to try and save the Kingdom of Hyrule. You will need to defeat Calamity Ganon, the main villain in many of the previous installments.

The beautiful open-world environment is one of the game’s top selling points. You can run, swim, or even paraglide around the terrain to look for food, items, or characters to interact with.

Although it was only released four years ago, The Legend of Zelda: Breath of the Wild is already considered one of the greatest video games of all time. It also ranked 31st on the list of the best-selling video games ever, despite being a Nintendo exclusive title.