The Simpsons is the longest-running sitcom in television history. Created by Matt Groening and consisting of 34 seasons spanning over 30 years, the animated comedy has a huge fan base that continues to tune in on a weekly basis. Focusing on the Simpson family – Homer, Marge, Bart, Lisa, and Maggie – the hit series is a parody of everyday American life with a colorful cast of characters and many storylines that relate to real-life. In fact, many of the plots and events that occur in The Simpsons have actually happened.

Simpsons predictions that came true include Siegfried & Roy being attacked by their tigers, the Walt Disney and 20th Century Fox merger, and most famously, Donald Trump being elected President of the United States of America. It’s crazy to think how many predictions about the future The Simpsons has got right over the years.

If you don’t believe us, read on and discover 16 things The Simpsons predicted that came true.

In the 2010 episode, “Boy Meets Curl,” Marge and Homer Simpson join the U.S. curling team. Somehow they make the Olympic final, and despite trailing, manage to pull off the victory against the heavily favored Swedish team.

Eight years later and in one of the biggest upsets in curling history, the U.S. men’s team beat the Swedes at the Winter Olympics. Not only did they win, but they also came from behind, just like in The Simpsons.

One of the earlier Simpsons episodes, “Two Cars in Every Garage and Three Eyes on Every Fish,” is about a three-eyed fish Bart catches in the local river. The reason for the three eyes is due to the Springfield Power Plant dumping waste into the river.

In 2017 this episode came to life when a three-eyed fish was caught by a local fisherman in Argentina. And just like in The Simpsons, the river the fish was found in was right next to a nuclear power plant.

In the great 1998 episode, “When You Wish Upon a Star,” Homer gets a job working for Alec Baldwin and Kim Basinger. While chatting with the two and director Ron Howard, Homer pitches a movie about a “killer robot driving instructor that travels back in time for some reason.” Nobody is enamored with his idea, but at the end of the episode, Howard is seen pitching the idea to 20th Century Fox executive Brian Glazer, who loves it.

Thankfully this film didn’t get made, but when Howard visits the 20th Century Fox offices, there is a brief shot of the 20th Century Fox sign with this caption underneath, “A division of Walt Disney Co.” This might not mean much on the surface but in March 2019, Disney announced a $71 billion merger with 21st Century Fox. The Simpsons predicted this business deal 21 years earlier, which is mindblowing.

This segment is part of the “Treehouse of Horror XIX” episode from season 20. Homer attempts to vote for Barack Obama but the voting machine keeps changing his vote to John McCain. Four years later during the 2012 elections, a voting machine had to be removed after it kept changing votes from Obama to his opponent Mitt Romney.

A 2017 episode of The Simpsons entitled, “The Serfsons,” was a homage/parody of the hit HBO series Game of Thrones. As well as being notable for the last time Hank Zaaria voiced Apu, the episode also predicted what would happen to Daenerys Targaryen in the penultimate episode of Game of Thrones.

The Simpsons watch as her dragon burns Springfield to the ground, just like in the show when she destroys King’s Landing. The episode also includes key references to the Night King and the Three-Eyed-Raven.

When Michelangelo’s famous statue of David is brought to Springfield and put on display, it causes controversy amongst the townsfolk. The community protests against the nudity that everyone can see at the local library where the statue is housed.

This incident from the 1990 episode, “Itchy and Scratchy and Marge,” mirrors a real-life protest that occurred in Russia in 2016. A copy of the Renaissance statue was on display in central St Petersburg but locals weren’t amused. A vote was initiated where people could have their say on how to dress David so the statue wouldn’t offend anyone.

One of the great Simpsons episodes from the 90s is “Homer at the Bat.” Homer and his wonder bat help the Springfield Nuclear Power Plant softball team go undefeated and earn a spot in the championship game against arch-rivals the Shelbyville Nuclear Power Plant. Having never won the trophy before, Mr. Bruns decides to reinforce the team with famous baseball players, such as Roger Clemens and Ken Griffey Jr.

Don Mattingly also makes the squad, but he has a run-in with Burns who keeps asking him to cut off his sideburns, despite not having any. Turns out this actually happened to the New York Yankee. In 1991 Mattingly was fined $250 by Yankees owner George Steinbrenner for growing his hair too long.

While the episode came out a year later, it turns out Mattingly had recorded his lines one month before Steinbrenner fined him for his long locks, once again proving Matt Groening is the modern-day Nostradamus.

German entertainers Siegfried & Roy are parodied in the 1993 Simpsons episode called “$pringfield (Or, How I Learned to Stop Worrying and Love Legalized Gambling).” While performing tricks, the duo (known as Gunter and Ernst) are attacked by their pet tiger when the animal realizes they abducted it from the wild.

In an unfortunate set of events, the real Siegfried & Roy were involved in a similar situation when their seven-year-old tiger, Mantacore, attacked Roy Horn during a performance in 2003. He was severely injured but thankfully recovered, although he and Siegfried only performed together several more times after the incident before officially retiring in 2010.

The Simpsons even hinted at a Noble Prize winner in, “Elementary School Musical,” the first episode of season 22. Lisa and her friends (along with Maggie) are up early watching the Noble Prize awards. When Jagdish Bhagwati wins the economics award, Martin Prince holds up a betting card saying he had Bhagwati in the sweeps. One of the other names on the betting card is Bengt Holmström.

The MIT professor would go on to win the Nobel Prize in economics six years after this episode aired.

In one of the early Simpsons episodes, “Brush with Greatness,” from the second season in 1991, Ringo Starr is seen answering fan mail from a decade ago. One such letter he is replying to is from Marge who sent Starr a painting.

Fast forward to 2013 and two Beatles fans from Essex, England, got a reply to a tape recording they had sent to Paul McCartney 50 years prior. Barbara Bezant and Lyn Jeffries had recorded a voice message for the Beatles and sent it to a London theater where the band played. The Beatles never received the communication but it was discovered five decades later, with McCartney finally getting his hands on the tape and sending a message to the two women, remarking “better late than never.” Ever wondered what’s really in your burgers? The Simpsons predicted horsemeat as the key ingredient, something proven right in 2003. In the season five episode, “Sweet Seymour Skinner’s Baadasssss Song,” Lunchday Doris is seen using horsemeat to make the kids lunch.

Nine years later the Food Safety Authority of Ireland found horse DNA in one-third of beef burgers sold at shops. Then in 2019, four people in Paris were put on trial for selling ready meals made using horsemeat. You can’t make this stuff up.

One of the best things about The Simpsons is all the celebrity cameos, and Lady Gaga’s is one of the best. In the episode “Lisa Goes Gaga,” the “Poker Face” singer visits Springfield to help get everyone out of a funk. While there she performs for the town, playing the piano and hanging upside down.

Five years later at the 2017 Super Bowl, Lady Gaga put on one hell of a performance that involved her flying through the air in a similar fashion to her Simpsons episode. It seems like the show gave her some inspiration.

Of all the predictions, this is the one we wish didn’t come true. In the 2000 episode, “Bart to the Future,” the future is unveiled to Bart, which shows his sister Lisa Simpson as the President of the United States. She takes over the Oval Office from none other than President Trump, who just like in the real world, left the country in an economic crisis.

Lisa visits a fortune teller in the 1995 episode, “Lisa’s Wedding,” who predicts the future. She tells Lisa she will end up marrying her college sweetheart in 2010. The episode shows Lisa in the future phoning her mom and speaking to her using FaceTime.

As everyone knows, there was no such thing as FaceTime in the 90s. While Skype became the first major video conferencing service in the early 00s, it wasn’t until 2010 that Apple announced a FaceTime feature for the iPhone.

The 2005 episode, “Midnight Rx,” deals with the good people of Springfield having to smuggle prescription medicine across the border from Canada after companies and businesses cancel their prescription drug plans. Homer and Grampa Simpson begin smuggling drugs and on one trip are accompanied by Ned Flanders and Apu.

While in Canada, Flanders meets his doppelganger but takes an instant dislike to him when he offers Flanders a “reeferino,” which is Flanders talk for a joint, as marijuana is legal there. 13 years later and Canada legalized weed, another Simpsons prediction that came true. 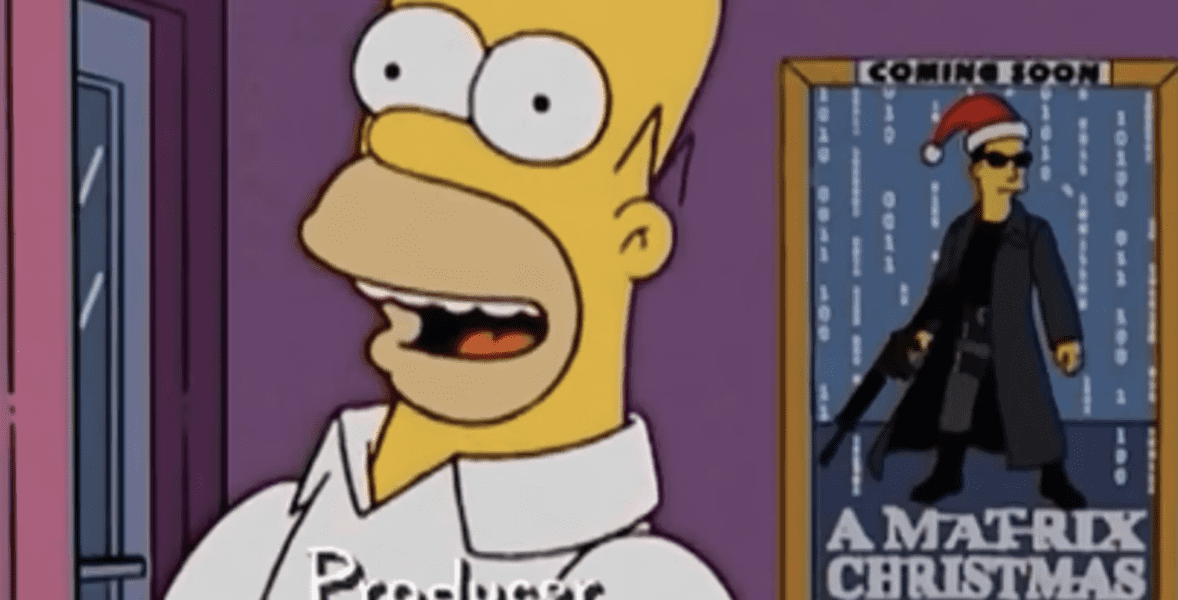 If there’s one movie we didn’t need, it was Matrix 4. The unnecessary sequel, officially titled The Matrix Resurrections, was released in 2021 and was a box office bomb. What’s this got to do with The Simpsons you ask?

Well, in the 2004 episode, “The Ziff Who Came To Dinner,” there is a movie poster advertising a new Matrix film. The poster features Keanu Reeves as Neo wearing a Santa Claus hat, with the title of the movie being A Matrix Christmas. To be honest, that would have been a much better movie than the one we got.

See more about - 14 Best Bald Cartoon Characters of All Time