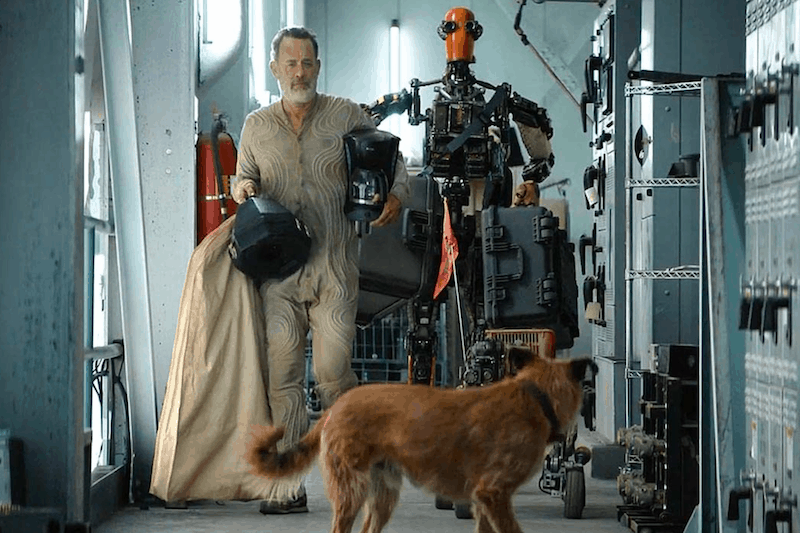 Tom Hanks, a Robot, and a Dog Try and Survive the Apocalypse in ‘Finch’

A film set on a post-apocalyptic earth where billions have died due to a solar flare doesn’t sound heartwarming, but when you throw in Tom Hanks, a cute dog, and a robot, it starts to sound a little more promising.

Finch is an Apple Original from Emmy-winning Game of Thrones director Miguel Sapochnik that stars the always reliable Hanks in the titular role. The movie finds Hanks struggling to survive the nightmarish landscape of earth with his pet hound. When he discovers a dysfunctional robot, he rebuilds it in hopes that it will help him and his adorable doggo in their journey across the country.

As the official synopsis reads: “A robot that lives on a post-apocalyptic earth which was built to protect the life of his dying creator’s beloved dog, it learns about love, friendship, and the meaning of human life.” I’m tearing up already.

The robot goes by the name Jeff and is voiced by Caleb Landry Jones, best remembered as the brother in Get Out. Hopefully, he’s more Wall-E than Chappie, with the trailer showing him learning to walk, drive, and speak dog.

The film is the debut screenplay from Craig Luck (set designer on Doctor Strange, Solo: A Star Wars Story, and Jupiter Ascending) and Ivor Powell (a producer on Alien and Blade Runner back in the day) and looks set to be a mixture of comedy, action, and drama.

I’ve also got a bad feeling either the dog or Jeff won’t make it to the final credits.

See more about - Denzel Washington Headlines ‘The Tragedy Of Macbeth’