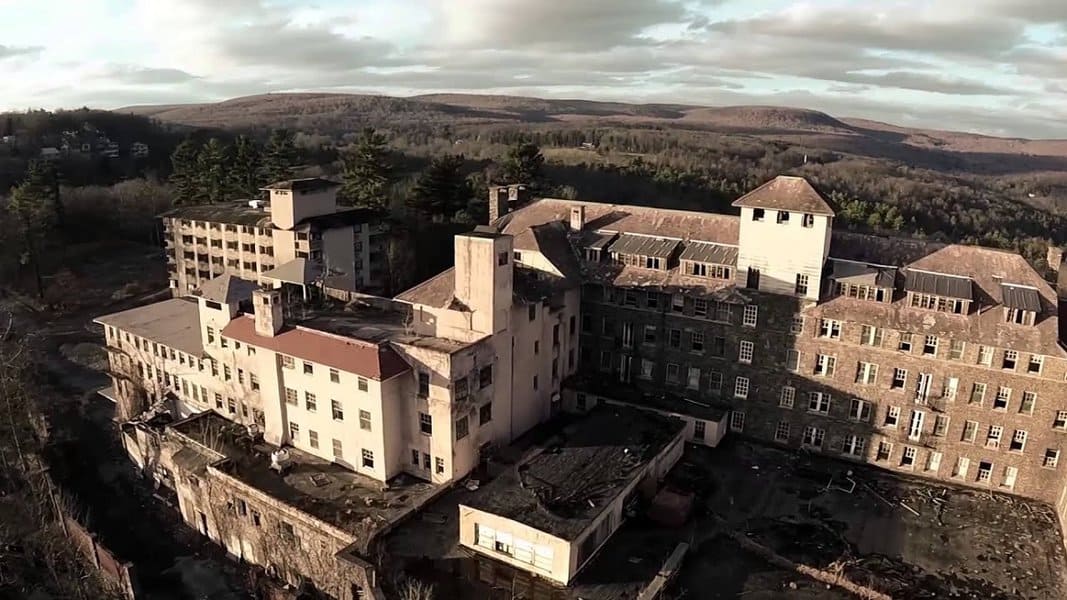 11 Abandoned Hotels Sure To Give You the Creeps

There’s something unsettling and creepy about an abandoned building. The large structure just sits there, peering back at the world. Perhaps there was a time when workers, families, or visitors would run up and down the hallways. Now, it’s empty and dark, often leading to wild tales of hauntings. It’s likely there aren’t urban legends, but that won’t keep the mind from racing.

On the other hand, some abandoned buildings never had any occupants. They took years of work and millions of dollars, but the doors remained closed. Here’s a look at 11 abandoned hotels sure to give you the creeps.

11 Abandoned Hotels Sure To Give You the Creeps 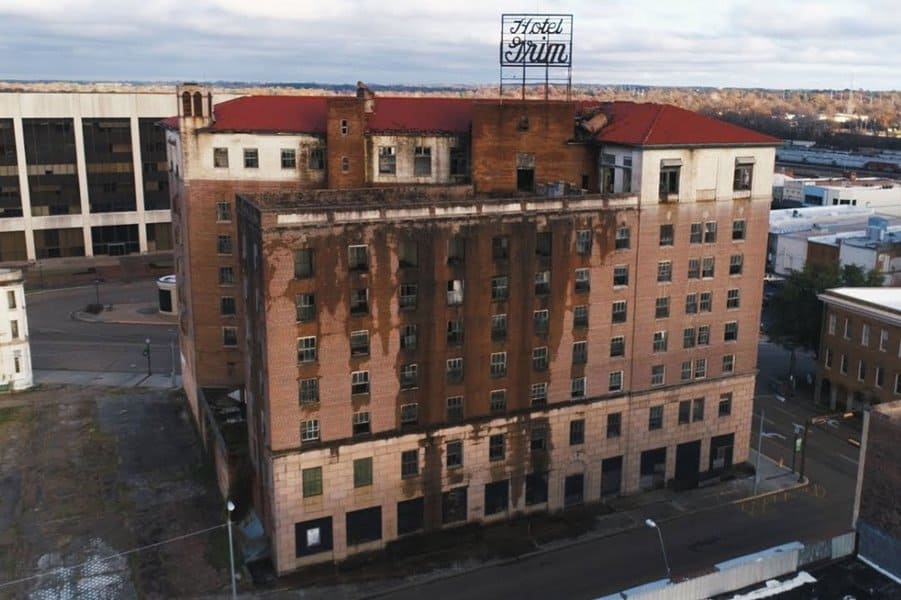 In the heart of Texarkana, Texas, sits a hotel straight out of a nightmare. Standing eight stories tall with 250 rooms, the abandoned Hotel Grim will make the hair on the back of your neck stand up. To be fair, the hotel never had a chance with a terrifying name like Hotel Grim. Opening its door in the mid-1920s, the bustling hotel was a hot spot in Texas.

According to legend, the notorious Bonnie and Clyde even stopped by once so Bonnie could enjoy a sandwich. It boasts a barber shop, a coffee shop, and giant ballrooms. Of course, these rooms all sit empty now, with memories fading as the dilapidated building scares locals and tourists. 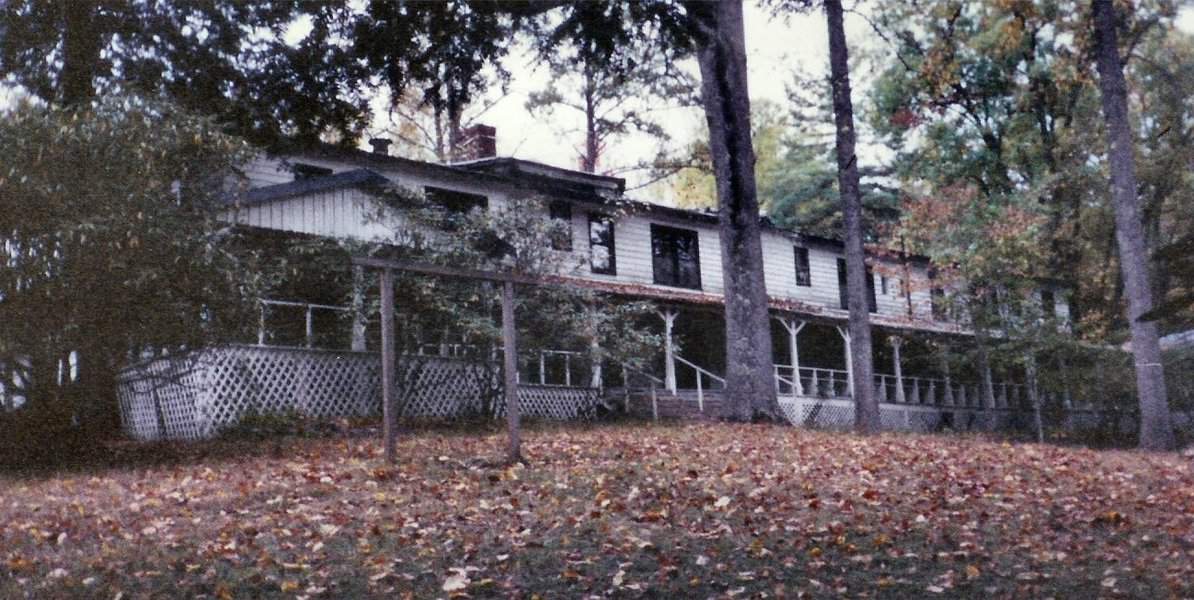 In Elkmont, Tennessee, are the remains of a once-popular hotel known as The Wonderland Hotel. After loggers discovered the land, the hotel opened its doors in 1911. It quickly became the hot spot for men who enjoyed hunting, fishing, and the great outdoors. It was open to the public for seven years before it became a private club. The hotel and club finally closed its doors in 1992.

While the building sat empty, several fires nearly destroyed the former hotel. Now an abandoned and severely burnt hotel sits in the area as a haunting reminder of the past. 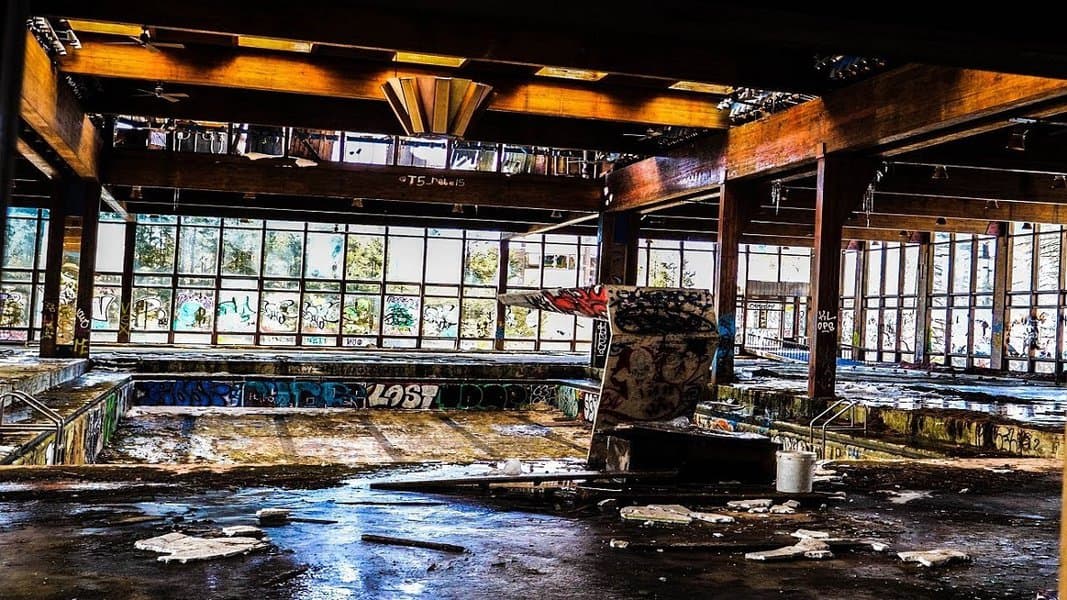 The recently demolished Grossinger’s Catskill Resort Hotel is one of the most famous abandoned buildings. Located in the historic Catskill Mountains near Liberty, New York, Grossinger’s was the heart of the famed Borscht Belt. The ominous hotel stood empty for decades as urban legends and myths grew around it.

In the 20s and 30s, several resort hotels refused Jewish families. The Grossinger’s and the Borscht Belt became the number one vacation spot for Jewish families. However, by the 70s, business began to decline as families started traveling to tropical destinations. After closing its doors in 1986, Grossinger’s sat abandoned for decades.

With shattered glass, broken fixtures, and decaying walls, the bustling hotel had an eerie vibe. If that wasn’t enough to send chills down the spine, the Olympic-sized swimming pool was littered with garbage as weeds and moss grew around it. In 2018, the city demolished the former vacation hotspot, with the last remaining building burning down in 2022. 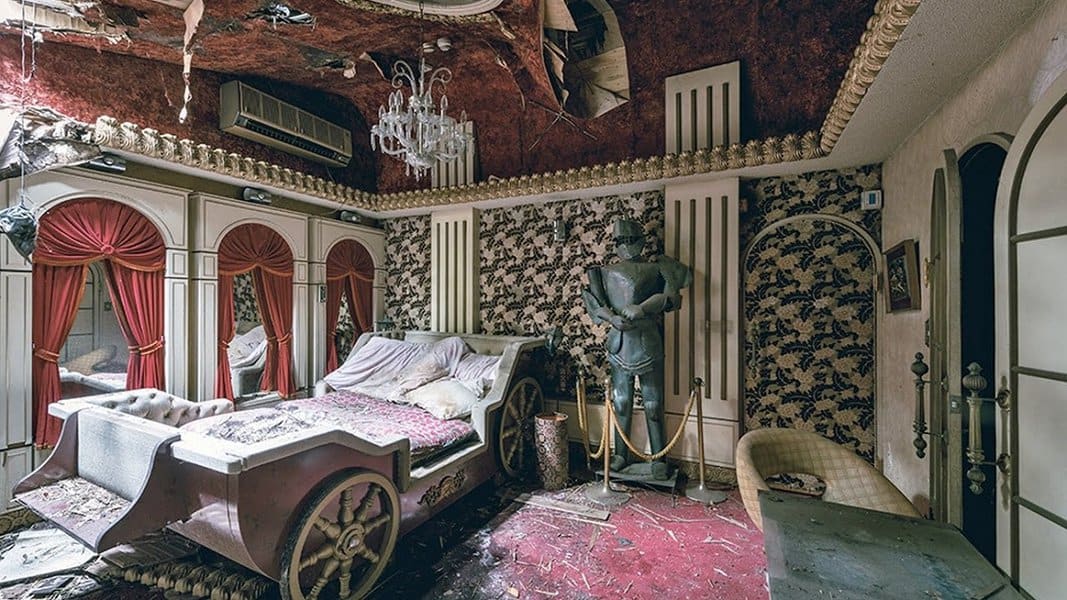 Love Hotels are hugely popular in Japan, allowing guests to play out their wildest fantasies. The hotels often have themed rooms with S&M gear and other weird things. Therefore, nothing is more creepy than an abandoned love hotel.

The Honshu Love Hotel has been run down and dilapidated for years. Not only is the hotel abandoned, but Disney-themed dungeon and UFO rooms with spaceship beds are still intact. Furthermore, the chamber’s brightly colored furniture and bondage room all add to the creep factor. If that’s not enough, the hundreds of mirrors will freak you out. 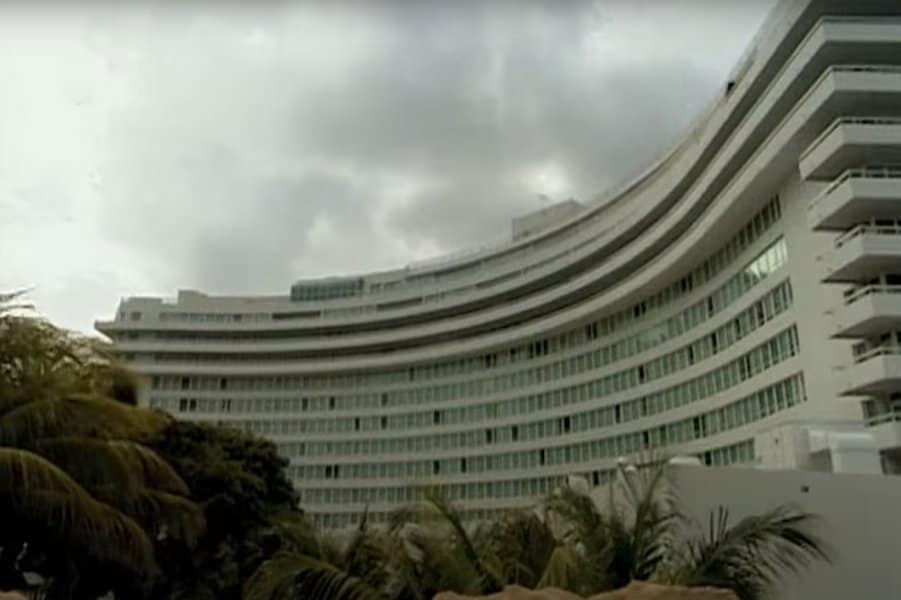 While Las Vegas is full of glamorous hotels and iconic casinos, the Fontainebleau Hotel has sat eerily empty for decades. The original hotel first opened its doors in 1948 but closed when it couldn’t compete with the more prominent resorts. Since 1992, plans have been in place to build a hotel on the former El Rancho Hotel and Casino and Algiers Hotel site.

In 2007, work began on the hotel, with the grand opening planned for October 2009. With 70% completed, the hotel filed for bankruptcy and never opened. Various companies have attempted to open the hotel for years, but there have always been obstacles in the way. The current plan is to open the hotel in 2023.

See more about - The 20 Most Famous Buildings In The World 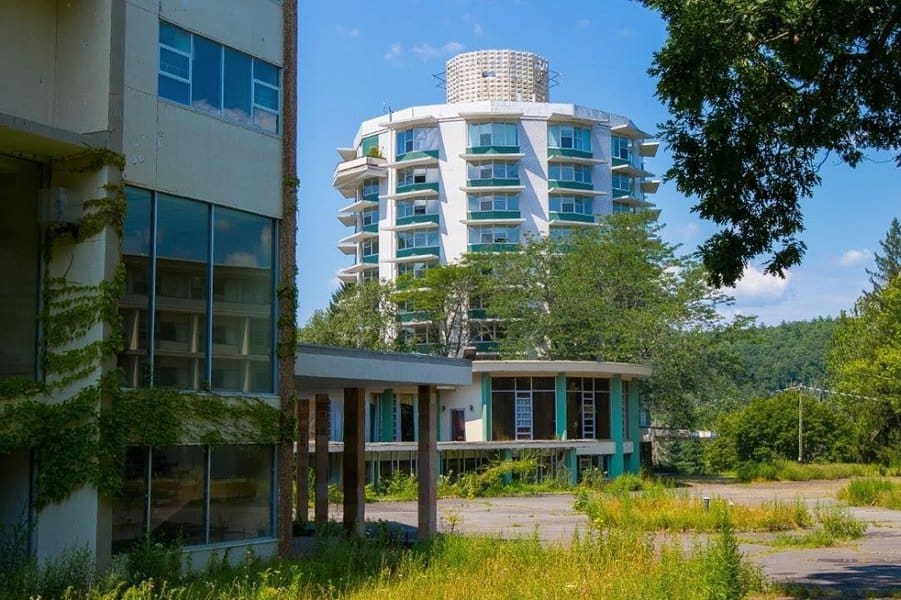 Lonely heart-shaped hot tubs and romantic round beds sit unused in the former honeymoon destination, Penn Hills Resort. Initially, the resort started as a tavern in 1944 before becoming a hotbed for honeymooners. Young couples and newlyweds would travel to the 500-acre resort in the Pocono Mountains in Analomink, Pennsylvania.

Over the years, the building started to fall apart with floods and fires damaging a place that was once all about romance. Dubbed the “Paradise of Pocono Pleasure,” the resort closed in 2009, leaving the ice rink and wedding-bell-shaped pool unused for years. After co-founder Frances Paolillo’s death, the resort closed and has remained empty. 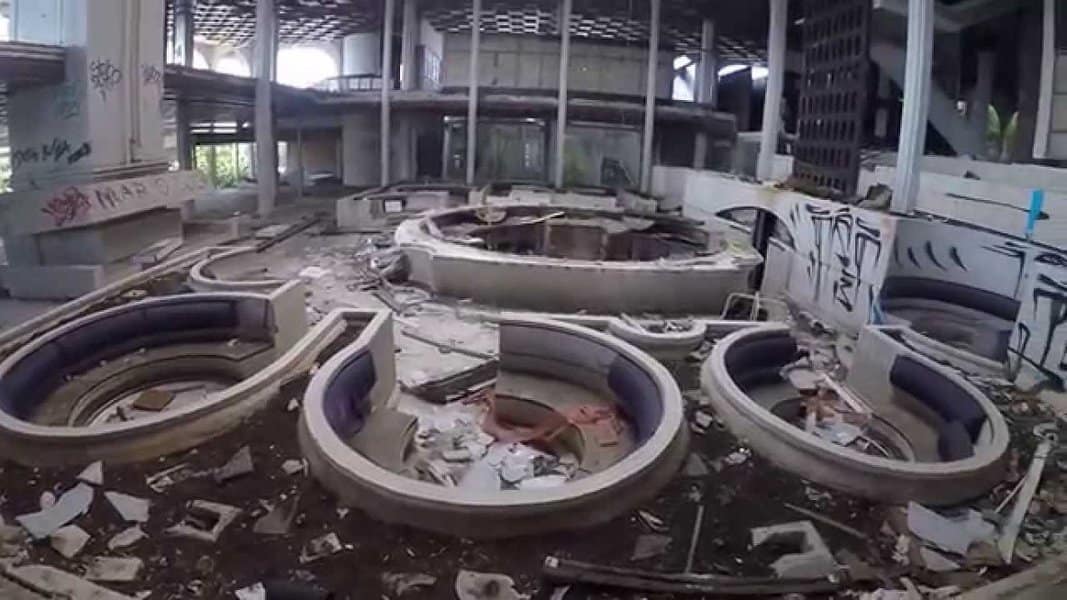 On the Croatian island Krk, the abandoned Haludovo Palace Hotel sits eerily. In the early 70s, Penthouse magazine founder Bob Guccione had big plans for the hotel and sank $45 million into the project. With that investment, Guccione opened the Penthouse Adriatic Club casino in Haludovo in 1972. Within a year, everything changed and the casino shut down after going bankrupt. Later, the hotel became a safe haven for refugees during the Yugoslav Wars.

Despite the history and incredible views, the hotel hosted its final event in 2001. Since that night, Haludova has fallen into despair, with the interior decaying rapidly. In 2018, an investor attempted to transform it into a private resort but met opposition from locals. 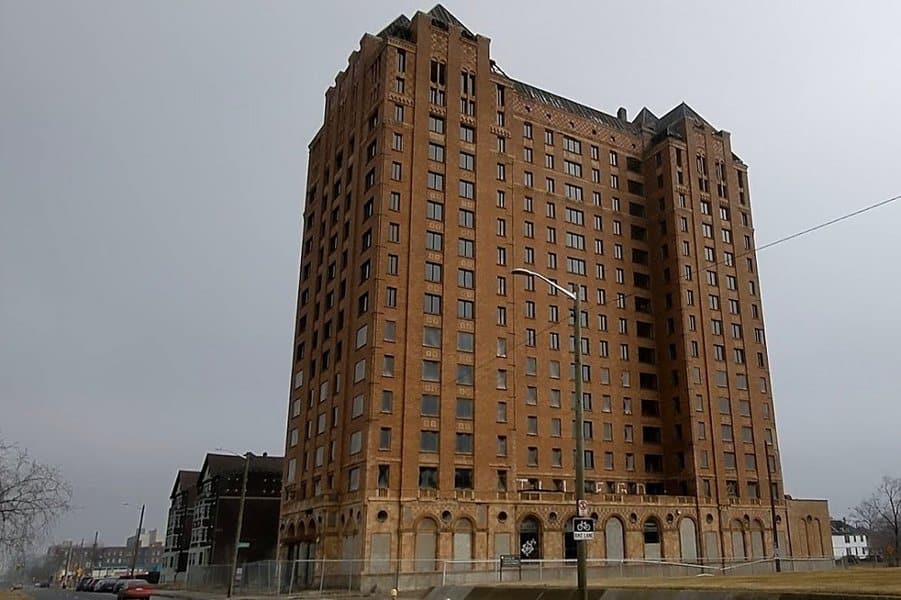 The Lee Plaza went from cutting-edge apartments to a horrifying abandoned building and then a work of art. Located in Detroit, Michigan, the 16-story high-rise building had its grand opening toward the end of the roaring 20s.

A few months after opening, the stock market crashed, resulting in the Great Depression. From then on, the iconic art deco building had various owners over the years. In 2022, the city announced a historic restoration of the neglected building to be completed in phases. 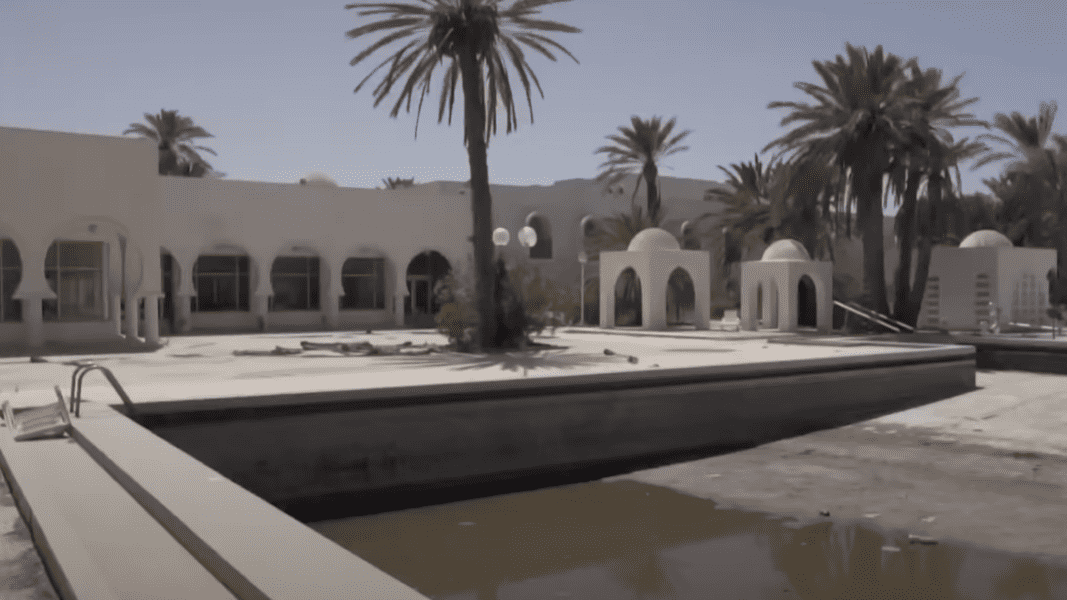 The Sinai Peninsula is a popular tourist attraction with a rich history and ties to biblical stories. Hence, it makes perfect sense to create hotels. While it was a great idea, in theory, the execution of it was a mess. The Egyptian desert is full of abandoned and incomplete hotels. In many cases, skeletons of buildings are eerie reminders of what could have been. These vacant and lonely structures sit in an empty and vast desert.

In the 1920s, thousands of people would venture to the popular resorts in the Pocono Mountains. While the Buck Hill Falls Inn began as a small wooden cabin, it became a popular place to stay, with roughly 400 rooms. It thrived throughout the 50s and 60s, but business declined in the 70s. By the 1990s, the historic resort had closed down for good. 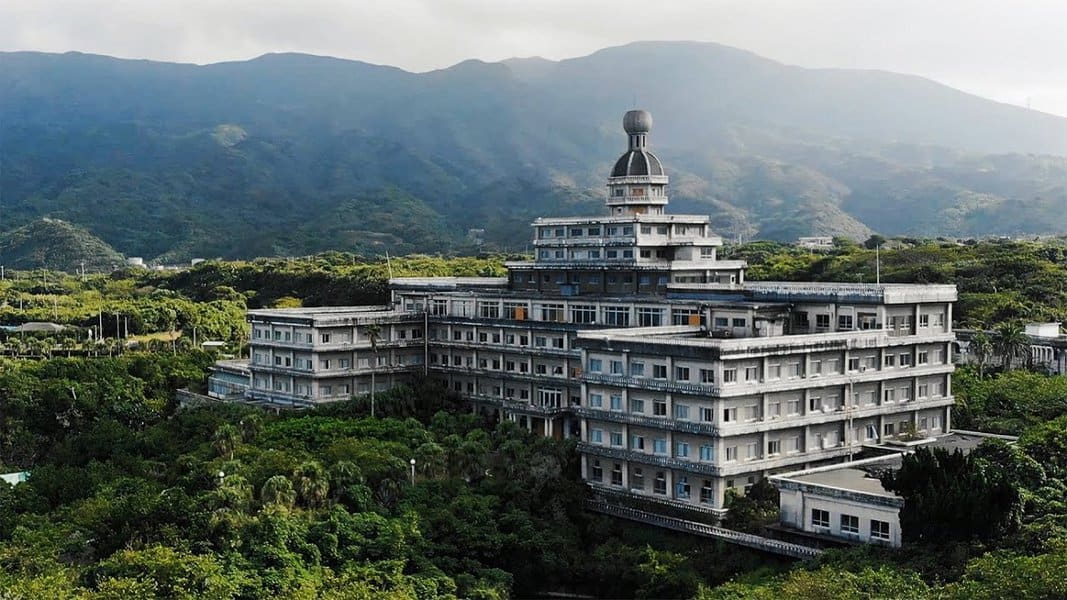 South of the special wards of Tokyo in the Philippine Sea is the volcanic island Hachijō-Jima. The island is an integral part of Japan’s history. At one point, the Hachijo Royal Resort was a highlight of the island.

The French-style luxury hotel was at the center of the 1960s tourism boom. After closing in 2006, the hotel eerily sits abandoned as the grounds around it grow wild and out of control.

See more about - 15 Creepy, Strange, and Wonderful Abandoned Places You Can Visit