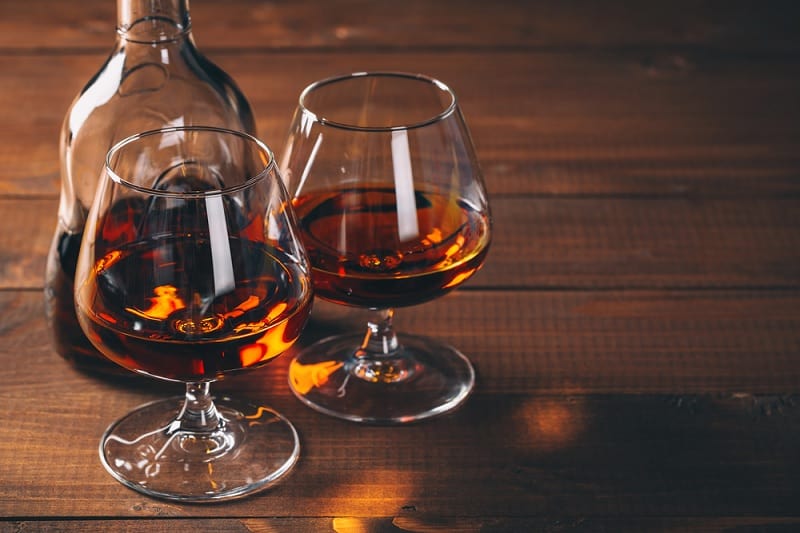 By: Rosey
Men's Food And Travel

The luxury liquor market has welcomed a few relatively new entrants in recent times. Having largely been the domain of wine and whiskey connoisseurs for a long time, it now accommodates a growing number of cognac enthusiasts.

To meet the rising demand and interest in this twice-distilled brandy that hails from France, several longstanding and reputed cognac houses or “maisons” are crafting high-quality products for the discerning palate of a cognac lover.

Cognac houses maintain brand distinctiveness by following a consistent recipe for blending varieties of eau de vie to develop their most recognizable and sought-after concoctions. Several brands jostle for prominence in a burgeoning market and a few have made a longstanding and indelible impression on aficionados.

These are a few of the leading cognac brands.

If one cognac house were to be chosen as the most recognizable name in the market even among those who may not be die-hard cognac enthusiasts, it would be Hennessy.

Since its birth in 1765 when it was founded by an Irish military officer, it has completed an interesting and sometimes tumultuous journey that made it synonymous with luxury, thanks to its merger with brands like Louis Vuitton and Christian Dior. After a series of corporate mergers and takeovers, it is currently owned by the two conglomerates Diageo and the parent company of Louis Vuitton, and commands forty percent of the global cognac production.

Its universal appeal is largely due to the fact that it churns out a varied selection of cognac to cater to the tastes of the casual drinker or the discerning collector. Its offerings range from VS or Very Special to XO or Extra Old categories of cognac.

While Hennessy has created a wide variety of smooth and delicious blends, one that stands out among seasoned enthusiasts with experienced palates is the Hennessy Master Blender’s Selection No. 3 Limited Edition cognac. It is a single-batch cognac, which carries distinct notes of toasted hazelnuts and praline along with a lubricious and supple body.

A well-known and hugely respected brand, Maison de Remy Martin is a cognac house that originated in France in the commune of Cognac and dates back farther than Hennessy.

It is most noted for its cognac fine champagne. Cru is a French wine district that is defined by a collection of vineyards that produce high-quality grapes owing to the soil quality and impeccable cultivation practices.

Grande Champagne and Petite Champagne are two such crus that boast fertile and suitable terrains or terroirs for grapes destined for wine and cognac. Remy Martin sources its grapes from these regions to ensure the highest quality and brand consistency and to fulfill the promise to its loyal following of cognac aficionados. Remy Martin’s offerings span the entire spectrum of ages, prices, and levels of interest in cognac.

Remy Martin XO is a much-desired cognac that is crafted by marrying four hundred different eaux de vie. It carries a and a floral aroma and a smooth and velvety texture along with an intricate blend of flavors comprising candied citrus, plums, smoky nuts, and spicy cinnamon.

When the Remy Martin family settled in the Cognac region of France, Louis XIII was the reigning monarch. He was also the first to recognize cognac as a drink that deserves its own classification. As a tribute to the king, Remy Martin has named what is possibly their most exclusive cognac after him.

Louis XIII is a cognac that exudes pure luxury and a sense of French history even at first glance, because of the incredibly eye-catching crystal decanter that holds it. Modeled after a metal flask that was retrieved from a battlefield dating back to the sixteenth century, each exquisite bottle is intricately etched by hand at reputed French crystal craft houses including Baccarat.

For centuries, cellar masters have created Louis XIII from the oldest and best vintage of eau de vie, making it Remy Martin’s most exclusive creation. With a finish that persists on the palate for more than an hour, it initially issues forth notes of spices, candied fruit, and flora, which smoothly segue into an exotic melange of ginger, passion fruit, roses, honey and sandalwood.

A collector’s item or a gift for a very special occasion, this cognac is the embodiment of indulgence.

A prestigious cognac house, Hine crafts a range of cognacs to suit varying tastes and budgets. H is a VSOP, or Very Superior Old Pale, which is a blend of around twelve batches of eau de vie, the youngest of which is at least four years old. It carries fruity and floral notes with a lasting finish.

The Hine Antique XO is a premium blend that is aged for twenty years. It carries notes of vanilla, spices, and fruits and has been a popular cognac for a century.

Moving into the space of sheer opulence, Hine offers Talent de Thomas Hine, a loving tribute to its founder. Its luxurious packaging includes an exclusive humidor fashioned from precious varieties of ebony, a crystal carafe signed by Baccarat, and tulip glasses designed by a member of the Hine dynasty.

It is crafted from fifty eaux de vie dating back to more than a century and sourced from Grande Champagne grapes. Redolent of the east, its fascinating notes consist of candied dates, sun-dried figs, cloves, gingerbread and currants.

One of the oldest cognac houses, it was established in 1809 in Paris s a cognac trading company and later relocated to Jarnac in the Cognac region to become a producer.

Its rich heritage includes the distinction of being the preferred brand of cognac with which Napolean Bonaparte treated his troops during the Napoleanic Wars. It was later designated as the official supplier to the Imperial Court by Napoelan III.

As pioneers in marketing, they were the first cognac brand to advertise on television and also the first to release a 3D advertisement.

Bottled in the iconic Courvoisier bottle with the narrow neck that gracefully expands into the curve of a wide base, the Courvoisier XO is a premium blend that is aged from eleven to twenty-five years. Its luscious notes include iris flower, candied citrus and creme brulee.

One of the very first cognac houses to be established, Martell dates back to 1715. Holding the status of the most exclusive brand of cognac during the mid-nineteenth century, it was served aboard the Queen Mary and the Concorde.

Its most recognizable cognac is the Cordon Bleu. Martell XO is a premium blend with a spicy aroma and dried fruit flavors.

What sets Pierre Ferrand apart from most exclusive brands of cognac is the location of their vineyard in the Angeac-Champagne terroir, which is considered part of the Golden Triangle region of Grande Champagne. The fertile region yields grapes of the very best quality for premium cognac production.

The Journey of Cognac From Grape to Glass

Cognac is the eponymous name given to the variety of brandy that is produced in the Cognac region of France and in adjoining regions that border the Charente river. While brandy is produced all over the world, cognac can only be branded as such if it is produced in this region under strict rules of production.

The rules are stipulated by the appellation d’origine controlee, a French government certification system for wine, cheese, and a few agricultural products. The system certifies that the product originated in a particular geographic territory.

Cognac is developed from a substance called eau de vie. Eau de vie is the general term for fruit brandy and literally translates to “water of life”. When fruit is fermented and distilled twice, the result is a clear distillate that carries the strong, pure flavor and aroma of the parent fruit. Eau de vie is distilled from many types of fruit like raspberries, apples, plums, pears and peaches. Cognac springs from the eau de vie that is made from specific varieties of grapes.

The grapes are fermented to convert sugar to alcohol and then distilled in distinctive copper stills. Distillation elevates the alcohol content from seven to seventy percent. The resulting liquid is aged in French oak casks from two specific regions. The aging process refines the flavor of the fruit nectar and sharpens its essence.

A master blender then applies and intricate process of tasting and blending eau de vie of varying ages to create the final concoction, which makes its way into another barrel for further aging and ultimately into the bottle. The age mentioned on the bottle is the age of the youngest vintage of eau de vie in the final blend. 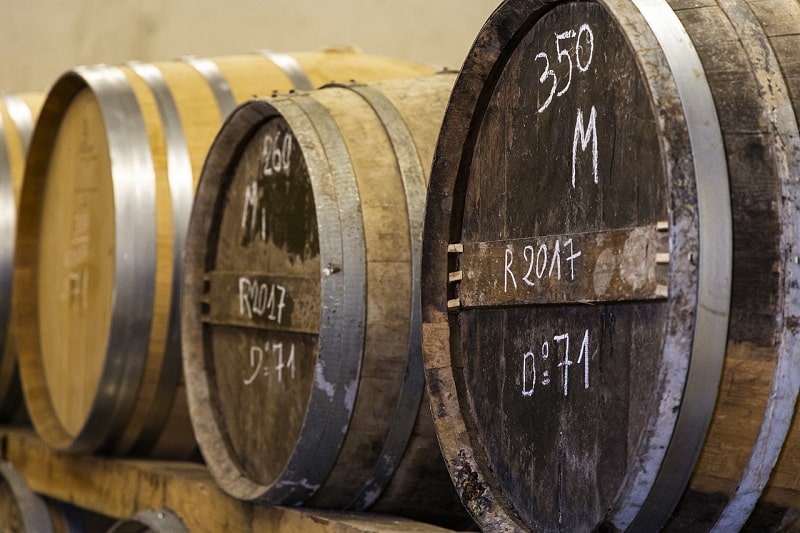 Single-batch cognacs are crafted from the eau de vie of a single vintage for a more distinct flavor that especially appeals to the seasoned cognac drinker. Blending various batches and vintages gives rise to a complex amalgam of sumptuous flavors and aromas.

The rules that govern the crafting of a bottle of cognac are clear and stringent. The source grape from which the juice is extracted can be one of only three varieties of white grape.

Ninety percent of the composition of the juice should be Ugni blanc, Folle blanche, or Colombard. The remaining ten percent has to be sourced from yet another permissible list of varieties. This juice is fermented by natural yeast that inhabits the air in the region. Sugar and additives are not permitted but coloring agents can be added before bottling.

The fermented grape juice has to be distilled twice in copper alembic stills of specific dimensions. The distillate has to be aged in casks fashioned from oak that is native to the Limousin or Troncais regions. The aging process has to last a minimum of two years but cognac producers age them for up to ten years and sometimes more.

The procedural and regional protectionist stipulations lend cognac its exclusivity.

Eaux de vie that are carefully selected and blended by experienced and painstaking cellar masters are aged in specific casks that are placed under exact temperature and humidity levels. This is carried out to acquire the desired final result of a delectable drink that maintains consistency across batches.

By virtue of its precise science, intricate craftsmanship, and rich heritage, the strictly regulated process of cognac production yields ambrosia that is a harmonious blend of luscious and exotic scents and tastes, which persist on the palate long after the first curious sip.

Is cognac the same as brandy?

The difference between brandy and cognac is a common question. When fruit is pressed to extract its juice, which is then fermented and distilled, the result is a brandy. Brandy can be made from fruits like berries, apples, plums, peaches, and many more.

Cognac is a type of brandy that comes from the Cognac region of France and is produced under strict regulations ranging from the source grape to the type of distillation apparatus to the material of the casks in which it is aged to the minimum aging period. 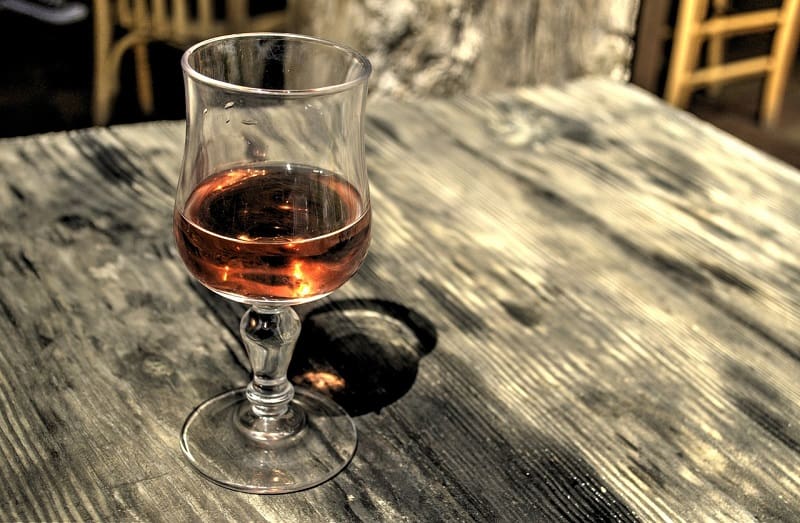 How should you drink cognac?

How to drink cognac is a question that could emerge from an avid enthusiast to a recent dabbler. Cognac is a type of brandy but contrary to popular belief, the best way to savor it is not necessarily from a balloon glass or brandy snifter.

The tulip glass has a narrower opening at the top and releases the aromas gradually instead of in one explosive rush. It is better suited for tastings and when you would like to thoroughly savor that special glass of premium cognac at leisure.