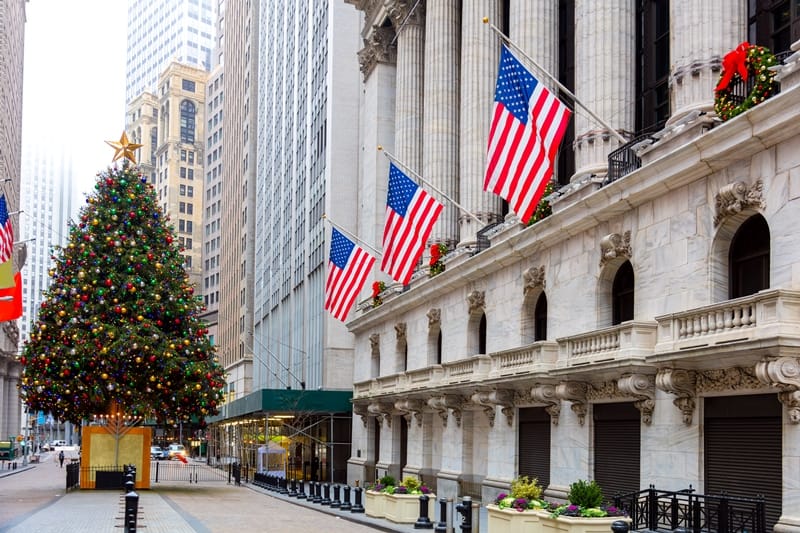 The 10 Best Places in America To Spend Christmas This Year

While several different countries in Europe are known for having some of the most amazing Christmas markets, the United States has also made a name for itself as being one of the best places to celebrate the holidays. From New York City to smaller and more lowkey towns such as Solvang, California, and Kennebunkport, Maine, the country is full of great skiing, tree lighting festivals, and scenic train rides that are sure to get you in the spirit of the season.

Without further ado, here is our list of the 10 best places to spend Christmas in America. 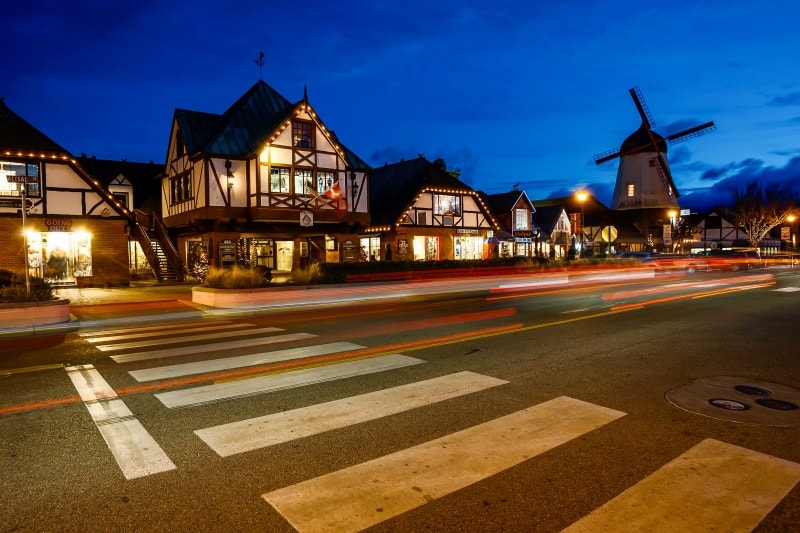 Known to be one of the most Christmassy towns in the United States, Solvang, California is a unique and quaint Danish town in Santa Barbara county that boasts some of the best wine tastings in the entire state. During the holidays, the European-esque streets of Solvang are lit up with an abundance of stunning string lights and Christmas, setting the tone for the festivities that the Julefest brings to this beloved California town.

The annual Julefest in Solvang brings everything from a tree lighting ceremony to a street parade. For those who have a passion for great food, don’t miss out on one of their holiday food tours and get a real taste of Solvang. 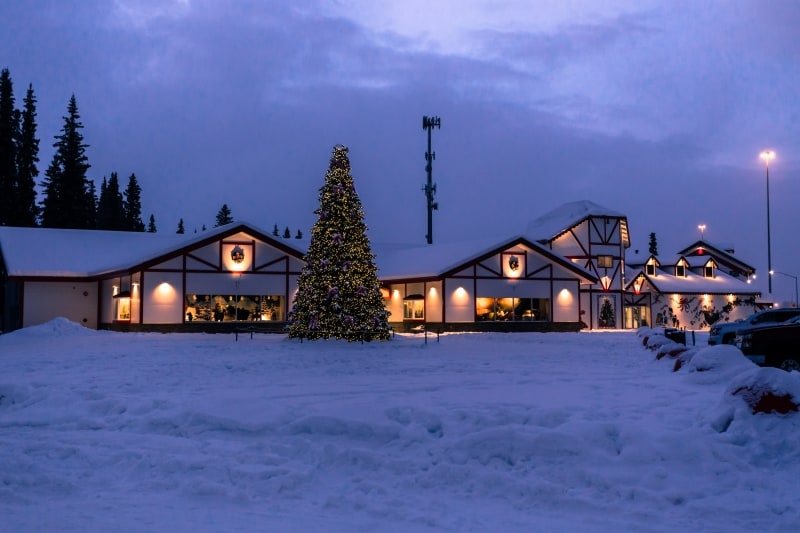 As the name would suggest, Northpole, Alaska is one of the ultimate Christmas destinations in the states. Though it is nearly 2,000 miles south of the actual North Pole, this small Alaskan town truly knows how to celebrate the holidays by going all out when it comes to decorations and activities.

In addition to the popular Santa Claus House, they are also famous for their festive street names like Saint Nicholas Drive, Snowman Lane, and the iconic Candy Cane Lane which gets lined with candy cane lights each year to set the tone for Christmas. Rent out a cozy log cabin and enjoy whiskey by the fire each night after exploring this unique town. 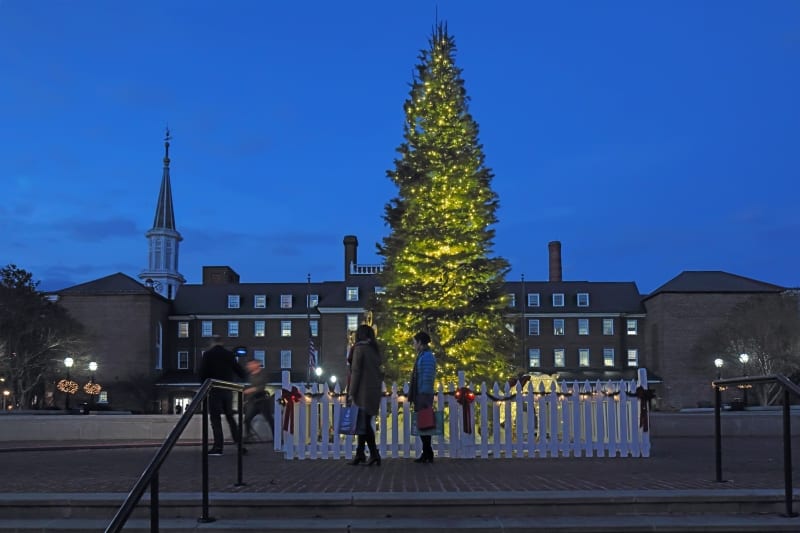 Located about 20-minutes outside of Washington D.C., Alexandria, Virginia is most popular for its river-side Christmas activities along the Potomac like the annual Scottish Christmas Walk Weekend and the Alexandria Holiday Boat Parade of Lights. If you’re lucky, you might even spot the waterskiing Santa on Christmas Eve. Another part of Alexandria that makes it so perfect for Christmas is its Old Town neighborhood which is home to traditional brick streets and elegant homes that are covered in holiday wreaths and Christmas lights, creating a true winter wonderland for those taking a stroll or drive in the evenings. 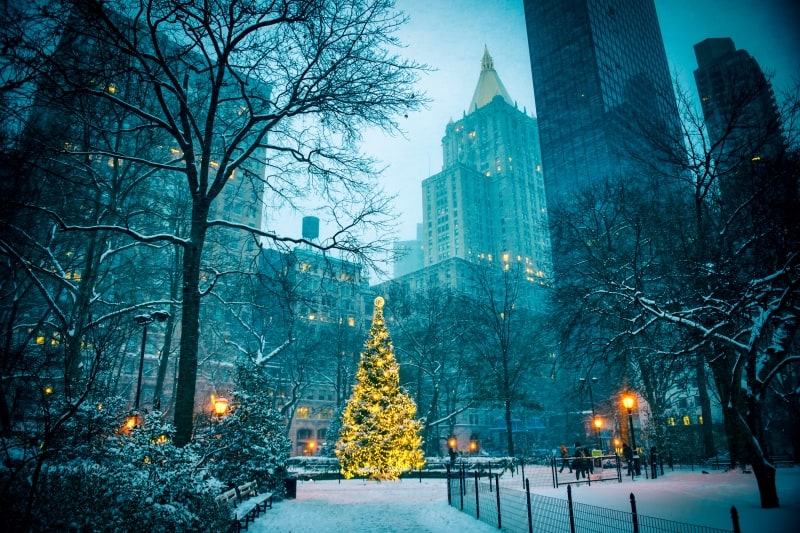 Being that several iconic Christmas movies have taken place in New York City, it is not surprising that this iconic concrete jungle has made it onto our list. Between ice skating around the Rockefeller Christmas tree to enjoying the Empire State Buildings annual Holiday Light show, New York City was seriously made for celebrating Christmas.

Even just taking a walk around a snow-covered Central Park with a nice cult of hot chocolate puts you in the holiday mood. Some other things to prioritize seeing while visiting NYC for Christmas include a trip to Bryant Park Winter Village and a visit to Dyker Heights in Brooklyn. 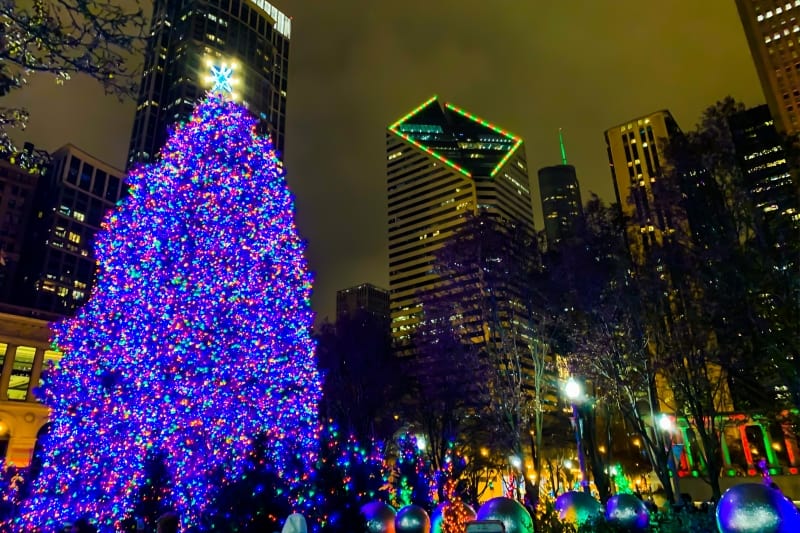 With one of the best European-inspired Christmas markets in the states, Chicago, Illinois is an absolute must see during the holidays. Though you’ll definitely be dealing with some frigid weather, Chicago is a beautiful city known for its dynamic restaurant scene and impressive art museums.

It is are also famous for having a vibrant and hip nightlife. While the city’s 50-foot Christmas Tree in Millenium Park is one of the more popular holiday landmarks, you’ll also want to make time for the ZooLights festival which boasts more than two million LED lights for a show-stopping experience. If you’d like to see what it’s like to unwind in a heated igloo, visit the Godfrey Hotel and then take advantage of their beautiful rooftop with a spiked drink in hand. 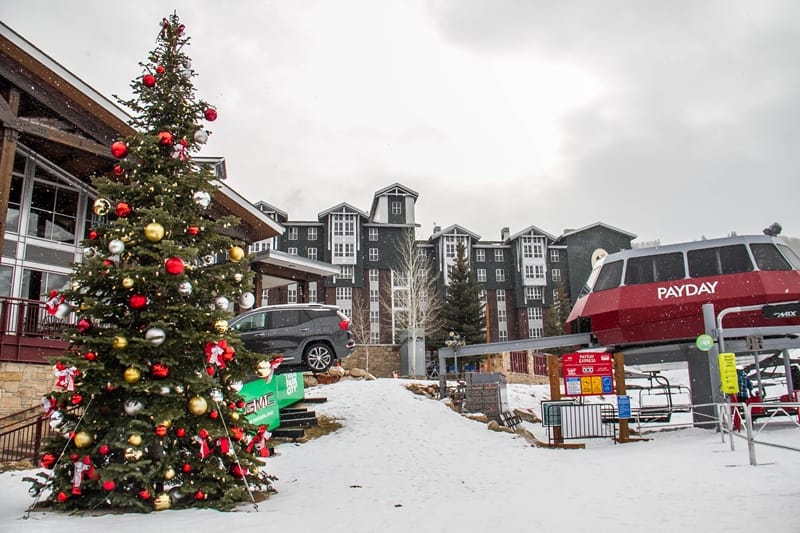 In addition to having some of the best skiing in the country, Park City, Utah is a beautiful mountain city that has great food and a festive scene for the holidays. If skiing isn’t your thing, some other activity options in Park City include dog sledding, snowmobiling, and even ice fishing.

They also have some stunning hotels such as The Chateaux Deer Valley and Park City Peaks Hotel. If you’re really looking to get in the holiday spirit, check out the city’s famous North Pole Express train ride which allows you to take in the scenic sights of Utah as you sip on some hot chocolate and watch the snowfall. 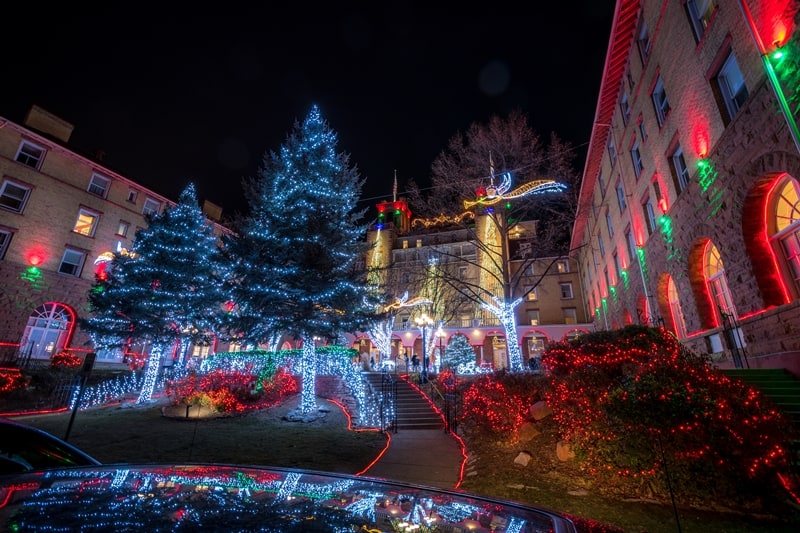 While Aspen is known for being a very luxurious and lavish town filled with fancy restaurants and five-star hotels, it also showcases the natural beauty and wonder of Colorado. With snow pretty much promised each year around the holidays, spending Christmas in Aspen, Colorado means that you are sure to have the white Christmas of your dreams all while enjoying everything that this upscale town has to offer.

Whether you’re looking to take advantage of the famous ski slopes that draw thousands of people to Aspen each year or you’d rather relax at a renowned resort such as The Little Nell or The Gant, there really is something for everyone in this scenic slice of heaven. 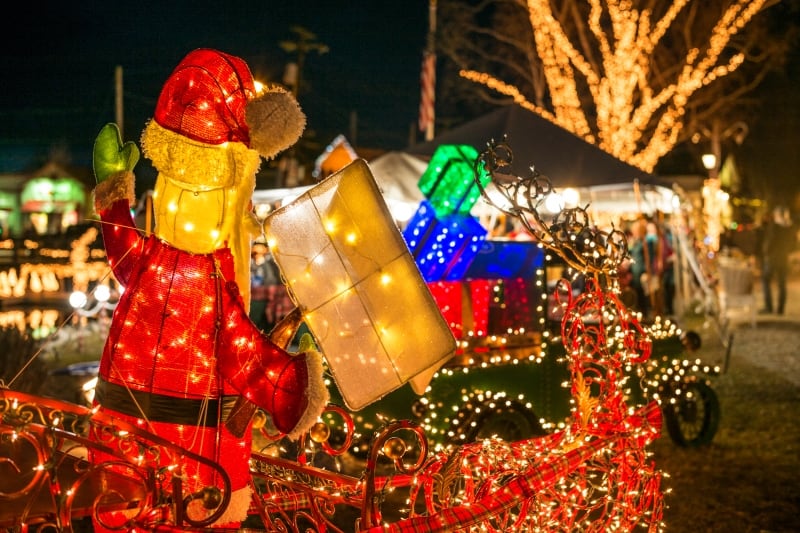 One of the lesser-known places on our list, Kennebunkport, Maine hosts an annual 11-day event called the Christmas Prelude which has holiday-themed activities along with their famous Christmas tree made of lobster traps. During the prelude, you also might catch Santa riding in on a lobster boat.

Speaking of lobster, make sure that you stop by The Clam Shack in Kennebunkport for lobster rolls. Said to be some of the best in the entire state, The Clam Shack is a must for those who consider food to be one of the most important parts of travel. If you need a place to lodge, check in to the Kennebunkport Inn and Cape Arundel Inn & Resort for a nice seaside stay. 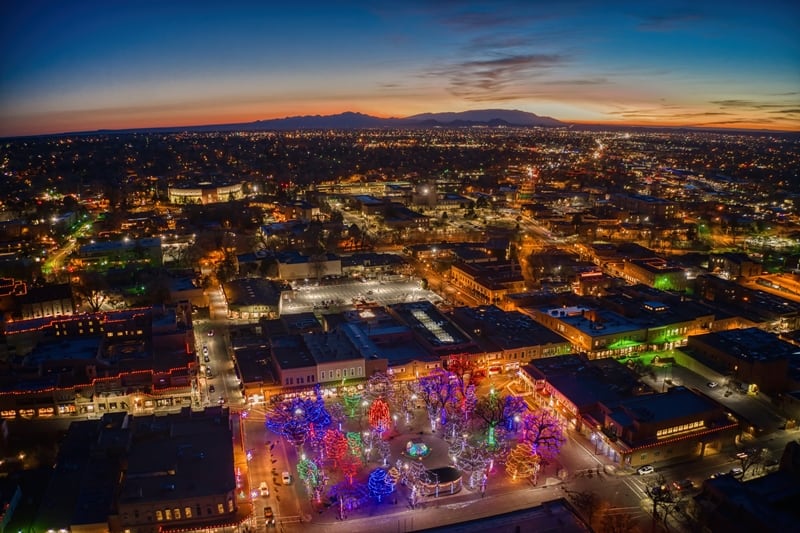 Between midnight mass at the Cathedral Basilica of St. Francis de Assisi and the annual Canyon Road Farolito Walk, Santa Fe, New Mexico is the perfect holiday destination for those looking to immerse themselves in local culture and get in touch with the more reflective and meaningful side of the season.

Visitors to Santa Fe will also have the chance to do some one-of-a-kind shopping at the Winter Indian Market. Of course, if you’d rather spend some time in the unique mountains of Santa Fe, enjoy some of the renowned skiing at the nearby Taos Ski Valley or Ski Santa Fe. 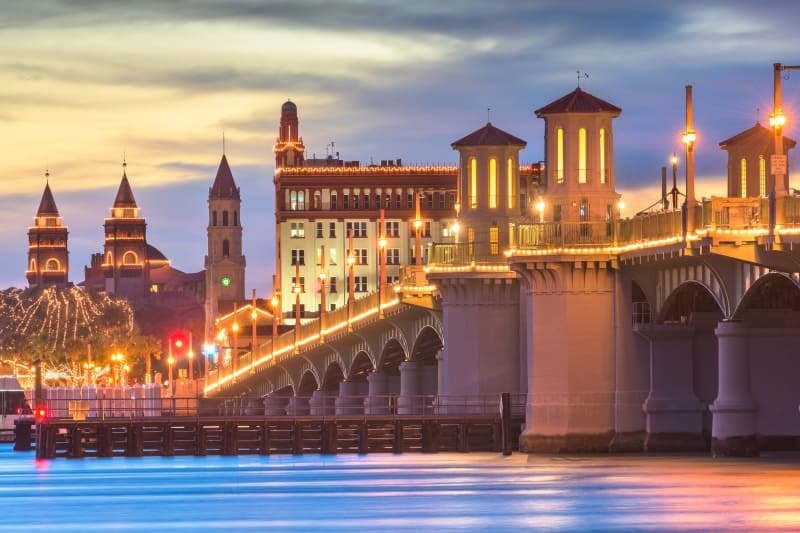 If Florida is on your Christmas bucket list yet you don’t want the typical experience of a festive weekend at Disneyland, head over to the nation’s oldest city of St. Augustine. With an annual Christmas Parade that runs into the new year, there is plenty to see and do in St. Augustine that will help you to experience the ultimate level of holiday cheer.

Plus, being that Florida is known for its moderate climate year round, St. Augustine is one of the few places on our list that allows for you to celebrate the season without the need for heavy coats or earmuffs. A couple of things to add to your St. Augustine to-do list include taking a ride on the Old Town Trolley to see the Nights of Lights tour and stopping by the Bridge of Lions to check out more than three million tiny white lights that extend 20 blocks through the streets of the historic city.

See more about - The 20 Best Christmas Movies Of All Time