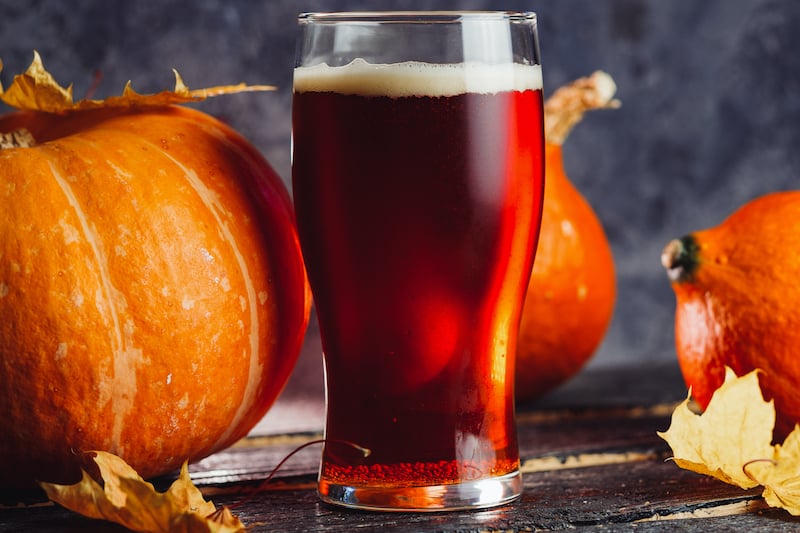 The 15 Best Pumpkin Beers To Drink This Fall

Fall is for football, Halloween, changing leaves, and pumpkin spice everything.

Pumpkin beer is fall’s top seasonal brew, with craft distilleries across the country developing a versatile and unique range of tasty beverages with different flavors and strengths.

Pumpkin beer brewing has a long and illustrious history in the United States, dating back to early pilgrim settlement, and the need for something to replace the onetime scarcity of malt.

In the 1990s with craft beer exploration exploding, old pumpkin brewing methods were brought back, and now take pride of place in the seasonal favorites alongside pumpkin spice lattes and bright orange Halloween candy.

The following collection of 15 best pumpkin beers to drink this fall goes right across the beer spectrum, from friendly session ales and wheat beers to heavy-duty imperial ales, porters, and stouts.

This is a delicious pumpkin stout from Saint Arnold in Texas. This awesome imperial stout is combined through a mix of pale two-row, caramel, and black malt, with Cascade and Liberty hops for bounce and bite.

The 10.5% ABV of The Pumpkinator is well balanced within a bed of subtle baking spices and fresh pumpkin pie.

As an imperial stout, the Pumpkinator is full-bodied and thick but with a pleasant real pumpkin mouthfeel that mixes the sweetness of molasses, brown sugar, and spices on the tongue.

If you want a taste of grandma’s kitchen during baking time, this is the beer for you. All your fall beer comparisons should match up against the Pumpkinator to prove their mettle, including the bourbon barrel-aged Pumpkinator! 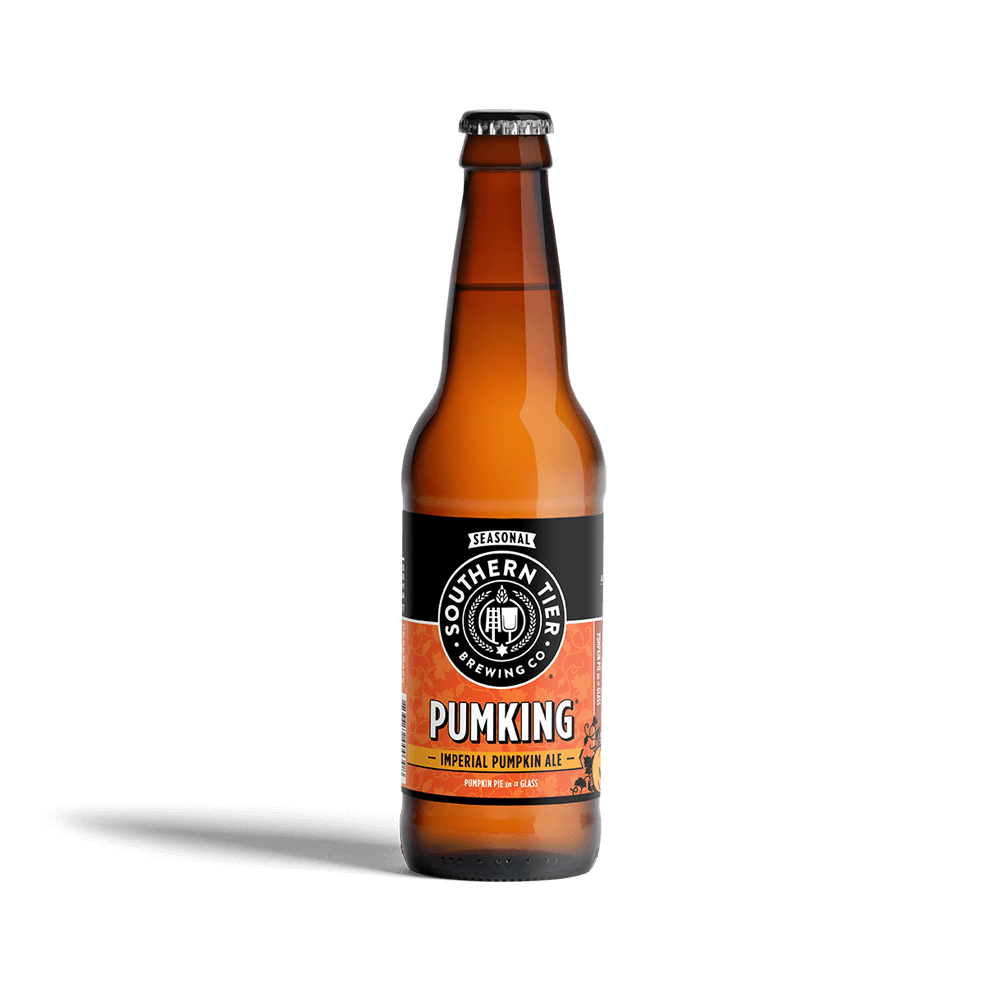 According to its tasting notes: “Pumking is an ode to Púca, a creature of Celtic folklore, who is both feared and respected by those who believe in it. Púca is said to waylay travelers throughout the night, tossing them on its back, and providing them the ride of their lives, from which they return forever changed.”

I’m sure if you drink enough pumpkin-flavored beer that it would have much the same effect as a Celtic sprite.

Pumking pours a lovely copper orange color, with the aroma of fresh pumpkin pie, cinnamon, and hints of nuts. The palate matches roasted pumpkin with pecan and malt flavors, transitioning to a rich and juicy mouthfeel that has notes of butterscotch, vanilla, and a shimmer of allspice.

It’s nice and thick in the glass, but not too syrupy, with only middling carbonation. If you like seasonal beer, this is one of the top options, and there’s also a harder-to-get rum barrel-aged brew well worth picking up as well. 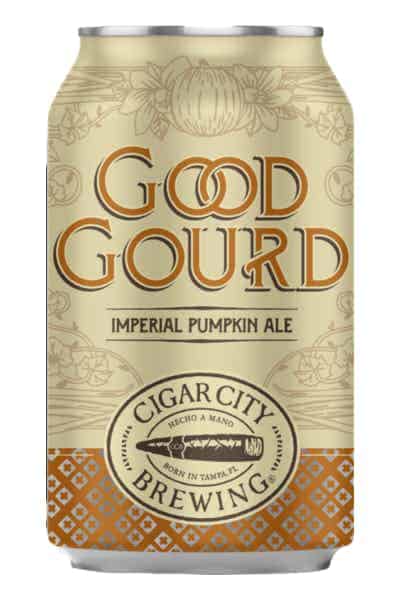 A top-notch season Imperial Pumpkin Ale by the Cigar City crew packs in 8.8%ABV alongside flavor and fun.

Good Gourd is deep orange in color in the glass, and bold with aromas of buttery pastry crust, actual pumpkin, and pumpkin pie spice.

It’s medium-bodied for a strong beer with nice caramel notes and spice contrasted by the boozy bitterness of good hops that pops along with the alcohol on the finish.

Good Gourd is a great imperial ale that can go toe to toe with the Pumpkinator for depth of flavor in a pumpkin brew. 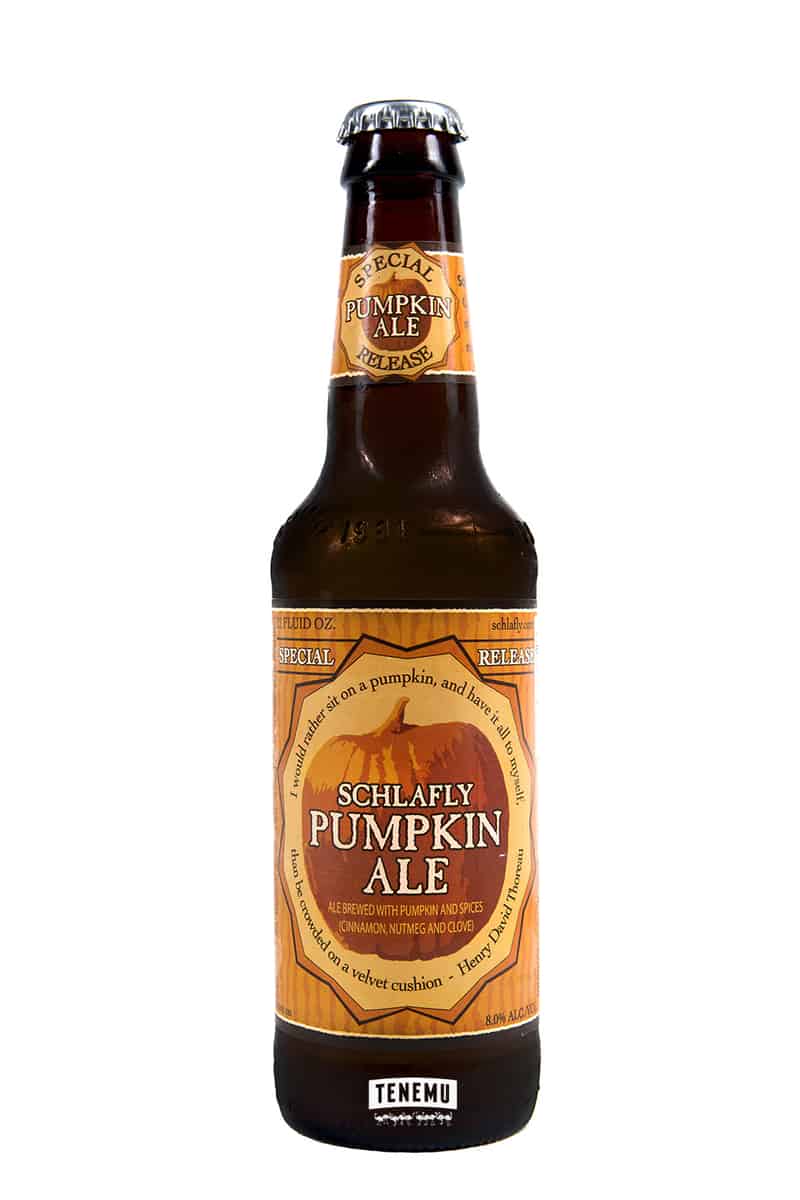 There’s plenty to like about this quality seasonal ale from Missouri’s Schlafly Tap Room.

The beer pours a beautiful copper color rich with the aroma of pumpkin and butternut squash balanced by spices and sugar.

It offers a creamy mouthfeel, like a sweet pumpkin stout, however, there’s plenty of balance between the spice and sugar notes on the palate, buoyed by a pleasing bite of hops.

Much like the Pumpkinator and Gourd, the beer is complemented by the power of the alcohol content, and to my palate is the desired way to craft a pumpkin brew.

Post Road Pumpkin Ale brings back the tasty tradition of early American settlers, who mixed the plentiful bright orange veg with barley malt to brew their beer. There were plenty of pumpkins around, and they were one of the most nutritious options available when adding to the mash.

Post Road Pumpkin Ale brings back actual pumpkin, with just a little bit of spice. Hundreds of pounds of pumpkin puree is blended into each batch to create an orange amber-colored beer bottled at 5%ABV.

There’s a noticeable, companionable, real pumpkin aroma, and the warm flavor of biscuit malt goodness that leans into a crisp refreshing finish. 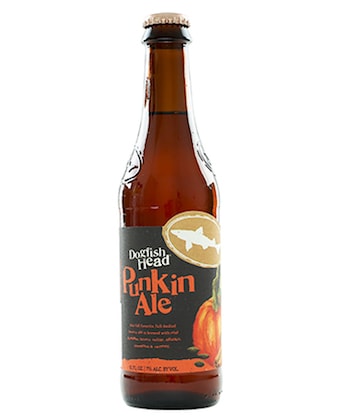 Legendary craft brewery Dogfish Head first produced their Punkin Ale in 1994, before they had even opened doors as a business.

The beer’s medium body and smoothness belie the alcohol content, with the sugar and pumpkin flavor contrasting nicely on the tongue.

If you are on the lookout for a great-tasting, well-crafted pumpkin beer for fall, this is definitely one to recommend, especially to those wary of a different flavor.

Pumpkinhead is a tasty wheat ale that utilizes a proprietary blend of spices including cinnamon and nutmeg in its brew.

According to the brewery’s notes, A proper pint of Pumpkinhead is served in a pint glass with a cinnamon sugar rim, accompanied by a shot, just in case your fall is less than friendly.

At 4.5%ABV Pumpkinhead is a great beverage for the pumpkin beer novice, but also a great session beer for those more attuned to the mix.

Shipyard’s other, stronger seasonal beer, Smashed Pumpkin, essentially doubles the alcohol content. It pairs well with sharp cheeses, nuts, lamb, hearty stews, and desserts like flan or pumpkin pie. Chefs find this an excellent beer to cook with in dishes such as braised short ribs. 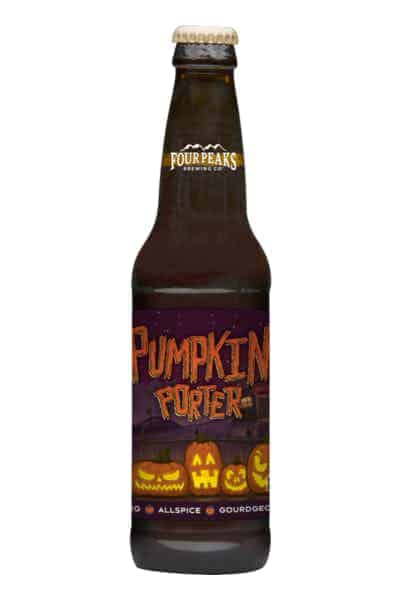 “It’s not really autumn until that first sip of Pumpkin Porter,” is the message from Four Peaks, whose seasonal ale is a thirst-quenching, smooth and sensible 5.1% ABV brew.

This Pumpkin Porter is a friendly mix of spices such as nutmeg, allspice, ground clove, and ginger, that contrasts delightfully against the pleasant richness of pumpkin meat.

Four Peaks Pumpkin Porter is a great tasting dark brew for those who traditionally opt for something else entirely when it’s time for Oktoberfest beers. 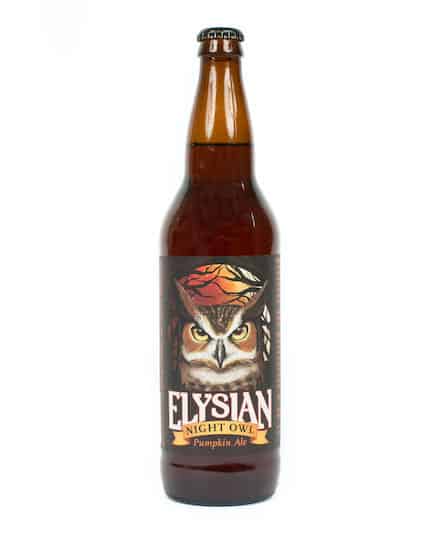 Elysian has a great range of pumpkin beers (keep an eye out for their seasonal pumpkin variety pack that includes Punkuccino and the Great Pumpkin.)

Their most delicious is the Night Owl Pumpkin Ale, a glorious pumpkin pale ale brewed with 150 lbs of pumpkin meat and a nice combination of malt and Horizon hops in each batch.

Night Owl is delicately spiced with nutmeg, clove, cinnamon, ginger, and allspice, and can be considered a good seasonal allrounder. 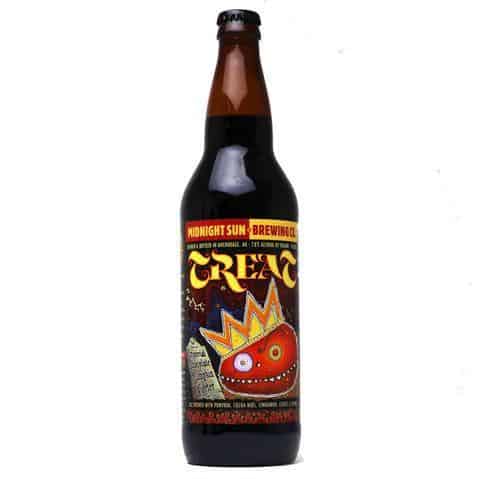 Arguably the most innovative Pumpkin brew on this list TREAT (The Royal Eccentric Ale Treatment) is a heady chocolate porter that melds cocoa flavor and earthy vegetables.

TREAT is a decadent mix of Pumpkin and choc that’s perfect for pairing with both sweet and savory dishes. If you don’t want to drink it, you can use it in cooking!

You are not going to look at drinking these six at a time but consume them during fall with friends in a snifter glass while relaxing. 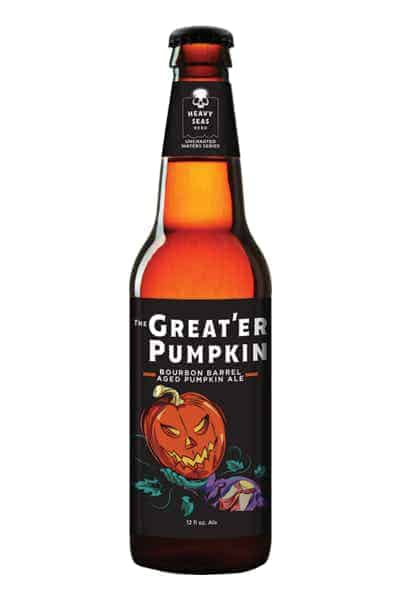 This heavy duty beer from Heavy Seas packs a wallop at 10% ABV, and is nicely influenced by the bourbon barrel aging process that laces the brew with oak wood notes, vanilla, and bourbon.

The whiskey barrel aroma is captured and blended with the baking spices and real pumpkin, buoyed by brown sugar. The British crystal malt hops give it bite and power.

A fantastic ale to brace against the autumn wind, Heavy Seas Great’er Pumpkin is strictly for the strong beer lover looking for something suitably seasonal. 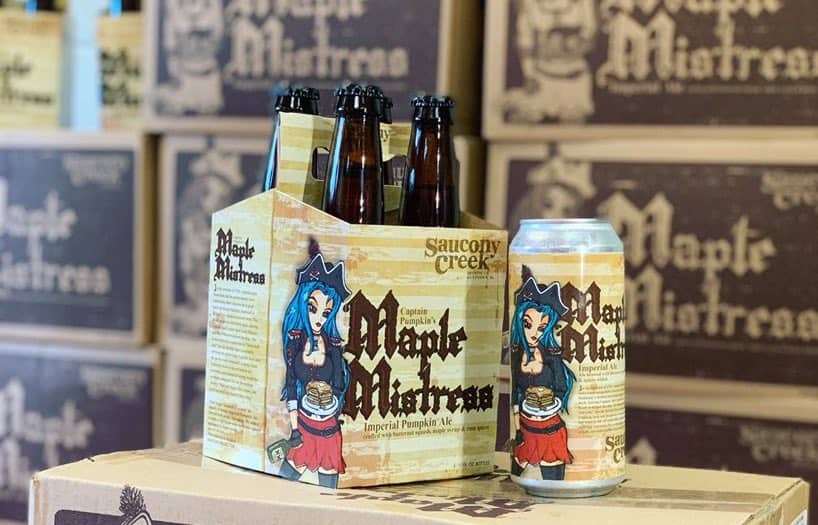 This Imperial Pumpkin Ale is brewed by Saucony Creek Brewing in Pennsylvania and is easily recognizable by the blue-haired anime mistress in pirate garb on the label.

Maple mistress is brewed with pirate rum spices, roasted butternut squash, and natural maple syrup, which gives it a nice point of differentiation from other strong, sweet pumpkin beers on this list.

The unique additions of maple syrup and butternut squash give the beer a rich, more complex flavor, and pairs well with cinnamon and pumpkin spice, which begin to dominate the mouthfeel the more you drink it.

I’d recommend Maple Mistress to the beer enthusiast wanting something slightly different from the traditional porter or aged pumpkin ale. 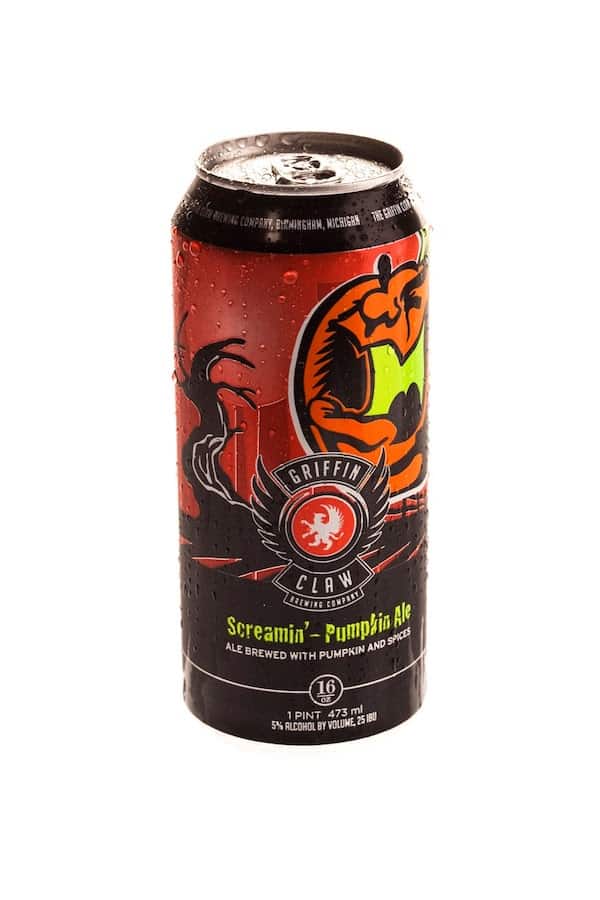 A great beer for a fall tailgate or for enjoyment as the weather cools, this amber ale from Griffin Michigan’s Claw is brewed with roasted pumpkin then spiced with ginger, allspice, nutmeg, and cloves.

It’s a spicy yet sessionable beer at 5% ABV and a pumpkin ale perfect for enjoying a six-pack, rather than just a single, hard-to-get-through heavy brew.

To me, Screamin Pumpkin ale seems like a tasty liquid pumpkin pie in a can (or bottle) that suits the traditional beer lover curious for a new fall taste that’s not a pumpkin spice latte.

A spice-forward imperial ale, the Weyerbacher Imperial Pumpkin Ale aims for a rousing flavor and succeeds.

It feels lighter than it should, given the alcohol content, and the middling carbonation assists the Weyerbacher’s smoothness.

This is a tasty brew with a bit of heat ideal for warming the bones in a chill wind. 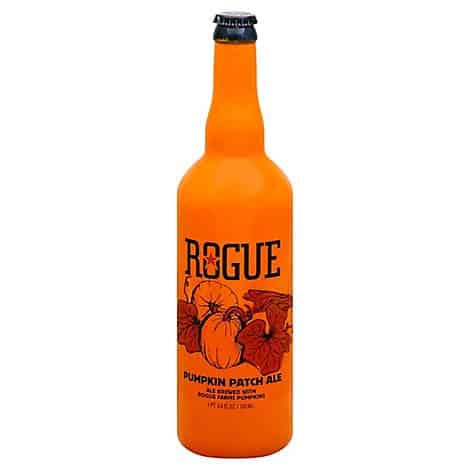 Rogue’s Pumpkin Patch Ale comes from veggies grown directly next to the company’s hopyard, where they are handpicked and then tricked to the Brewery to liven up their seasonal batching.

More bitter than other more heavy spice-laden bottles on this list, Pumpkin Patch offers their brew at 6.1% ABV. It’s fresh and vegetal with a flavor that balances the pumpkin meat with subtle spice and caramel.

You can buy Rogue Pumpkin Patch by the (bright orange) 750 ml bottle for drinking solo, or by the four-pack for sharing.