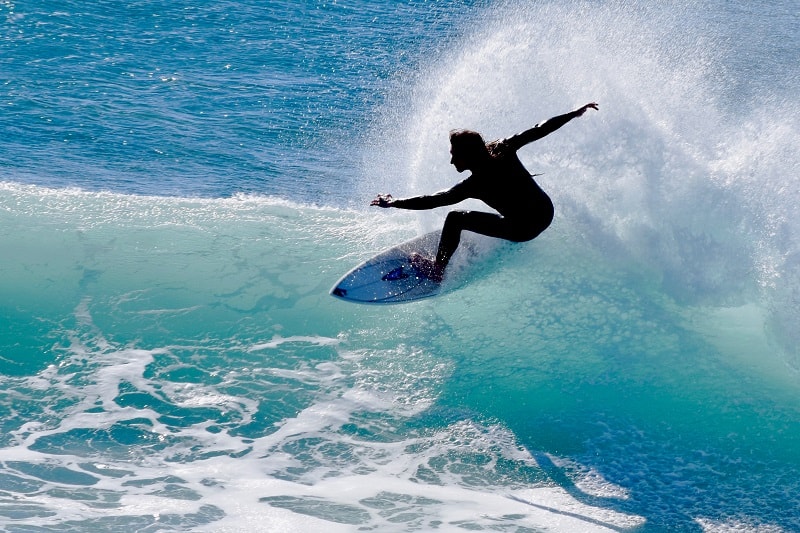 The 10 Best Surf Spots in the World

Surfing is one of those hobbies where it helps if you have your passport and suitcase ready to go. Apart from scoring epic waves and sharing a hella good time with friends, travel is an integral part of wave riding, be it a sunrise drive to your local beach or a long-haul flight to distance atolls on a strike mission — when the conditions line up and the swell shows up somewhere, you have to ensure you’re right there too.

We all know getting around the globe currently isn’t plain sailing – there’s a collection of countries and areas with uber-heavy travel restrictions due to the Covid-19 pandemic. However, this isn’t going to be the case forever.

We suggest you start waxing down your surfboard and getting into those yoga classes like you said you would, because once normality resumes (soon please), we’ve kindly compiled the 10 best surf spots – in the world – you simply have to visit. 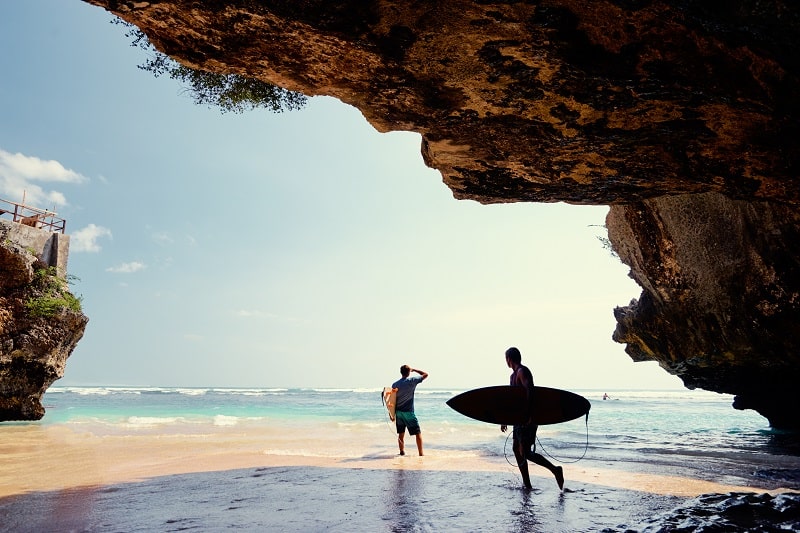 Known as the island of the gods, Bali has long been attracting tourists from all over the globe for decades. It wasn’t until the early seventies that Uluwatu was discovered by traveling surfers and played a centerpiece in the iconic surf movie, Morning of the Earth.

Uluwatu consists of five different peaks which stretch along a large submerged reef on the southwest of the island and serves up primarily lefts. The surrounding area consists of a large cliff face and requires you to take a series of winding paths and stairs to a secluded cave at the base; from here you can access the ocean and paddle out.

Once sitting out the back you’ll make out the nearby clifftop temple and catch smells of burning incense as the sun sets – if you surf you have to experience this at least once in your lifetime! 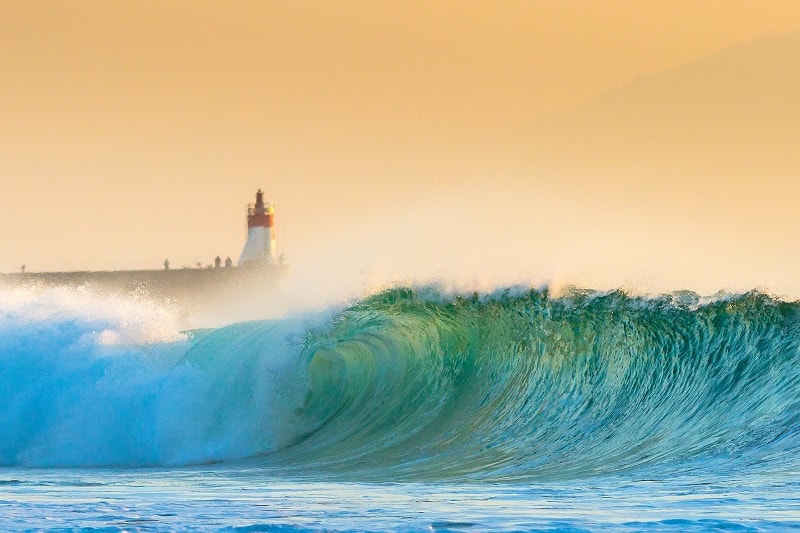 The town of Hossegor in the southwest of France is home to some of Europe’s best beach breaks and comes to life in autumn and winter. Conditions switch on in these cooler months as large Atlantic groundswells marry up with consistent offshore winds that can create epic overhead barrels attracting surfers from all over the continent.

The normally sleepy town can often be awash with surfers when the waves are firing, however, the stretch of beach is long and peaks are spread out, meaning you should be able to get your share. It’s worth noting sandbanks can appear and disappear literally on the spot – being on your toes will serve you well here. 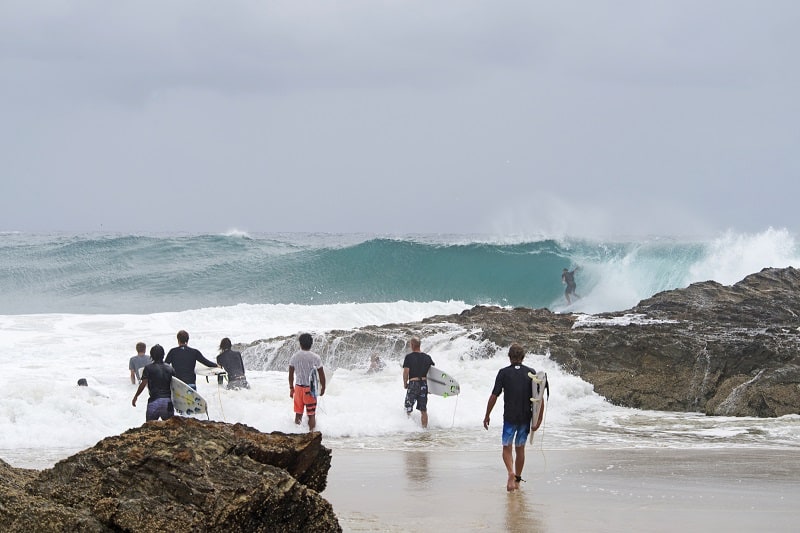 If great weather, pumping waves, and bikinis as far as the eye can see aren’t your thing, then you’re probably not going to have yourself a pleasant time if you visit the Gold Coast in Australia. If it is, pack your best surfing skills with you, because the average level of surfing here is ridiculously high.

Snapper, as it’s known to the locals, has honed the skills of more world champions than any other spot in the world; it’s even said Kelly Slater’s Wave Ranch is modeled on the dreamy shoulder-high rights, which on their day can just run and run and run. Leg-burning long turquoise walls anyone? 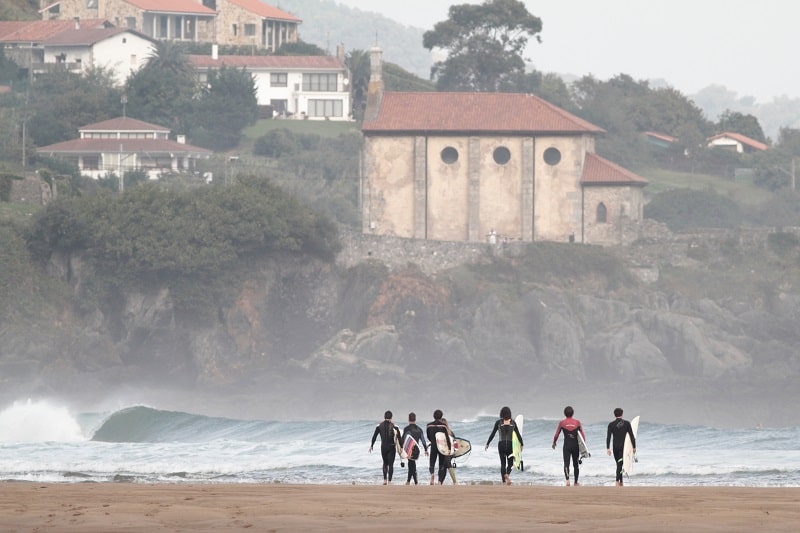 Being located in the Basque Country in Spain means Mundaka is the kind of place you could visit and, well, when you leave you might have to loosen your belt: the food and wine in this region is incredible. However, as fickle as this wave can be, should you visit when the town’s river mouth begins to break you’ll be burning off the calories no problem at all.

Arguably having one of Europe’s finest left-breaking barrel sections means should you be a fan of gastronomy – and a goofy-footer – this could very well be your idea of heaven. 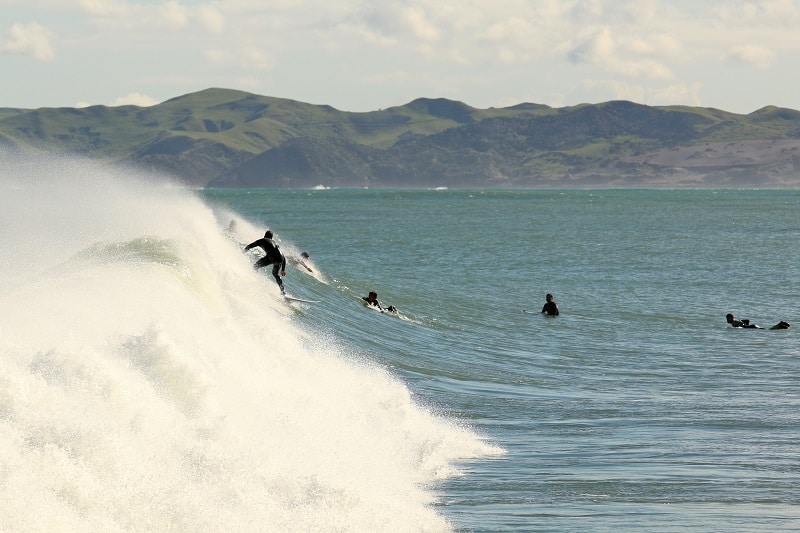 When you think of New Zealand you’d be forgiven for picturing long-empty rolling hills scattered with sheep, and for the most part, you’re not wrong either. The surrounding area of Raglan is this to a tee, but don’t let that put you off this high-performance point break.

Depending on the swell size and direction this wave can go from a mellow chest-high playpark to a double overhead grinding behemoth – which can separate the men from the boys. Another classic left-hander which requires you to have a decent backhand attack should you be a regular footer and insist on giving this remote wave a go. 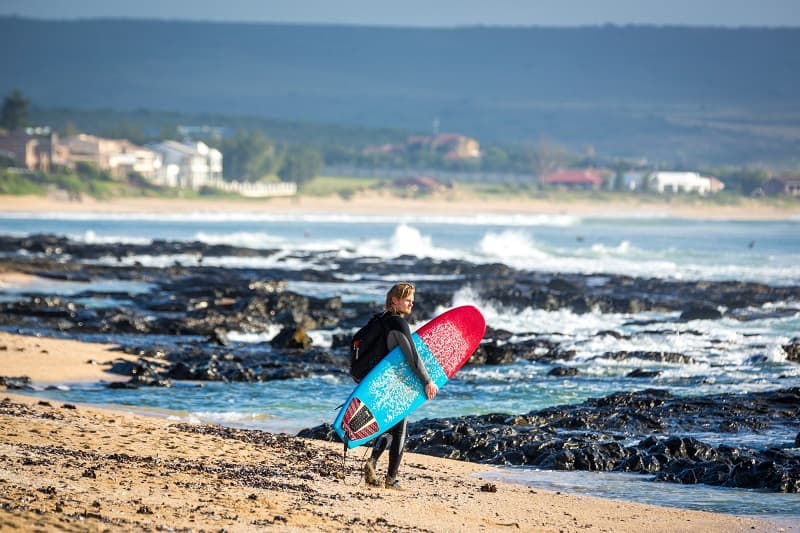 You may remember a rather famous altercation taking place between a professional Australian surfer and a great white shark a few years back. The surfer was none other than 3-time world champion Mick Fanning, and the location was (you guessed it) Jeffreys Bay in South Africa.

Like a good few other surf spots in the world, J-Bay can at times be considered “sharky.” No one on that fateful day in 2015 ever expected to see what unfolded, and truth be told, you shouldn’t expect it if you decide to visit this spot either.

This right-hand point break has witnessed incredible surfing over the years and is regularly an addition to the world championship tour. It’s because of its mechanical perfection experts say it’s the kind of wave that can show up any surfer’s weaknesses – even the pros! 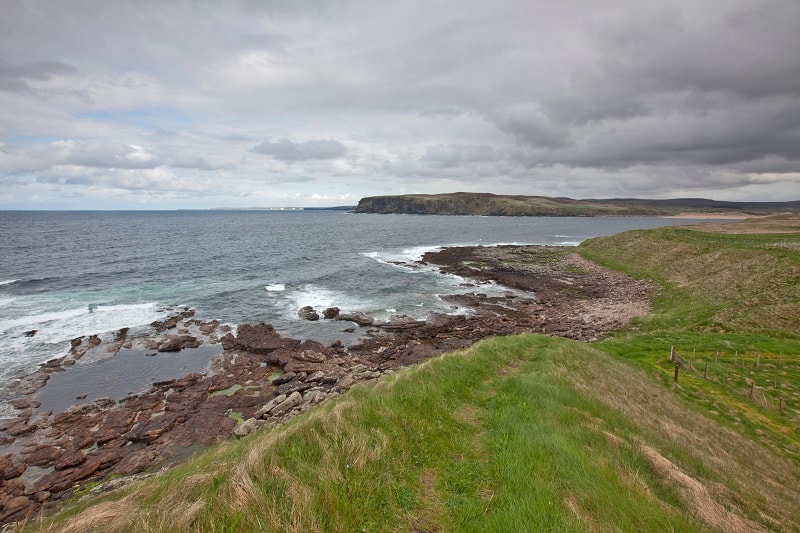 Situated at the very northern extreme of Scotland, Thurso is a quiet and remote town and the last place on Earth you’d expect to find any surfing. But how wrong you’d be! Given the nickname of the UK’s answer to the North Shore, there are several options on either side of the town including beach breaks and a few secret slabs – the real jewel in the crown though is the right-hand reef break at Thurso East.

Easily handling a large amount of swell means waves can max out in the 12-15 foot range providing world-class waves – for those brave enough to accept the perpetually cold conditions that is. 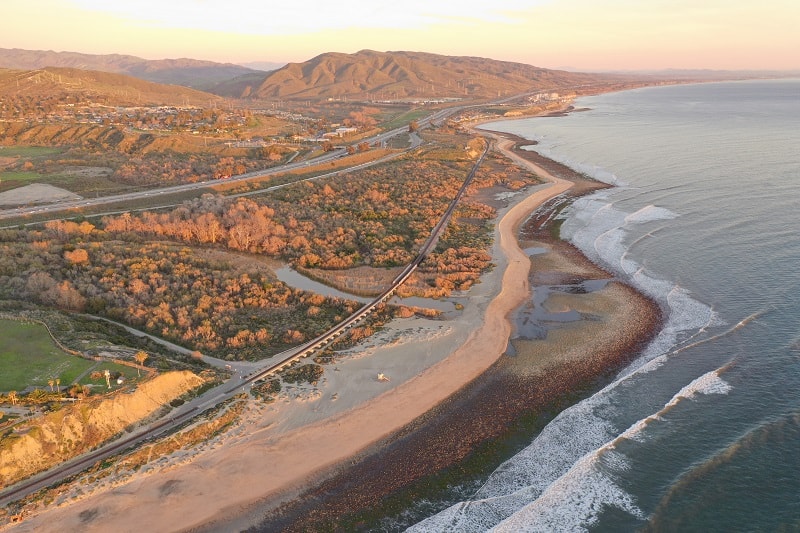 No list of this nature would be complete without at least one Californian inclusion. Trestles is often considered what Wimbledon might be to tennis or Madison Square Garden is to basketball – an absolute mecca. Being super consistent and offering a variety of sections along San Onofre beach means on any given day you’ll see surfers out in the water.

Don’t let this put you off though, beginners and veterans alike can share waves here and often do. From tight critical shortboard surfing to cruisey elegant longboarding; Trestles has something for everyone and is one of the few iconic spots you have to tick off your surfing bucket list. 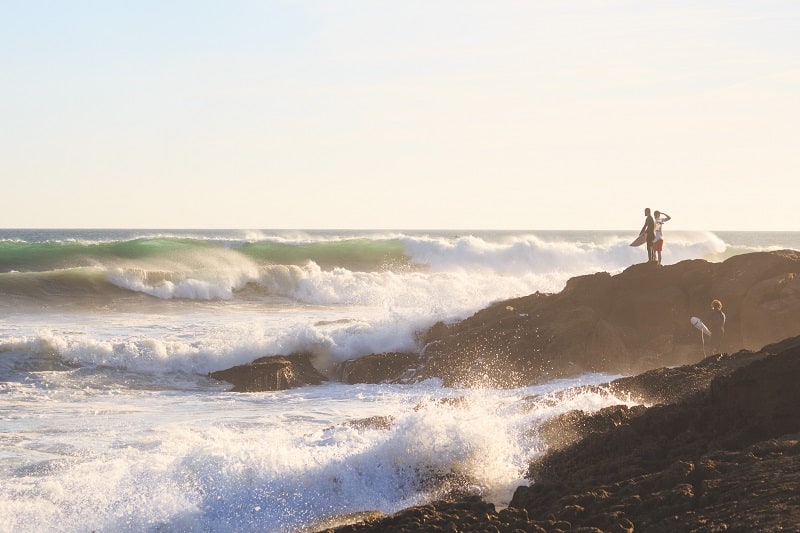 Morocco on the west coast of Africa is one of those countries which just permeates mystery without trying. A trip here will need some considerations as you are visiting an Islamic country, being familiar with customs and rules will inevitably save you from hassle at some point.

Anchor Point is a right-hand point break with utter majesty, and much like Jeffreys Bay is noted for being not only incredibly long – on its day – but also capable of showing flaws in a surfers repertoire. On the flip side, it also has the potential for you to practice, giving you the chance to iron out any defects you might have – just be sure to pack your strongest legs with you. This wave can go for hundreds of meters – literally. 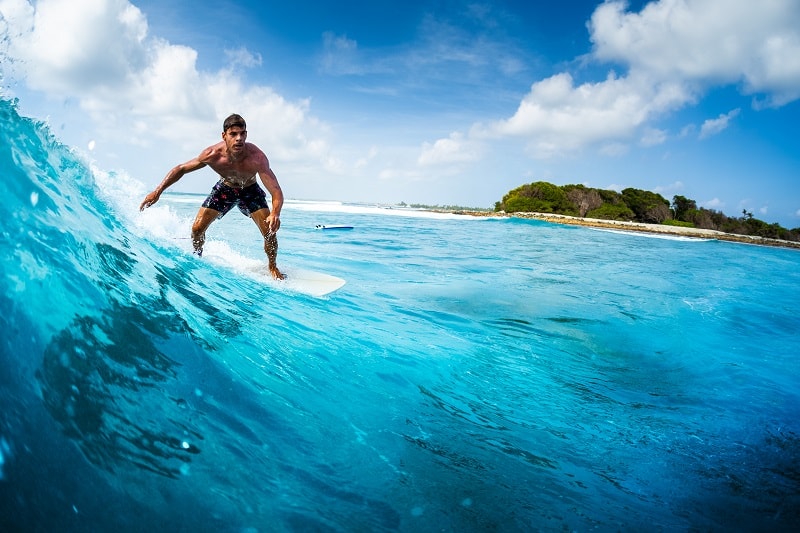 If your idea of a premium surf location is crystal clear water and never having to consider a wetsuit then the Maldives should be on your radar. The small archipelagic state sits in South Asia and is made up of some 1100+ islands, meaning surf opportunities are plenty.

Generally regarded as having approachable intermediate level waves, the country is fast becoming popular with travelers yearning for that tropical surf experience. Sultans sits in the Male atolls to the north of the country and provides a super-fast right-hand wave that works better with a bigger swell and can become very long with swell from the south.

A relatively easy takeoff leads into mellow walls with the inside becoming a little faster. It’s one of the most consistent waves in the Maldives and there will always be something to surf.