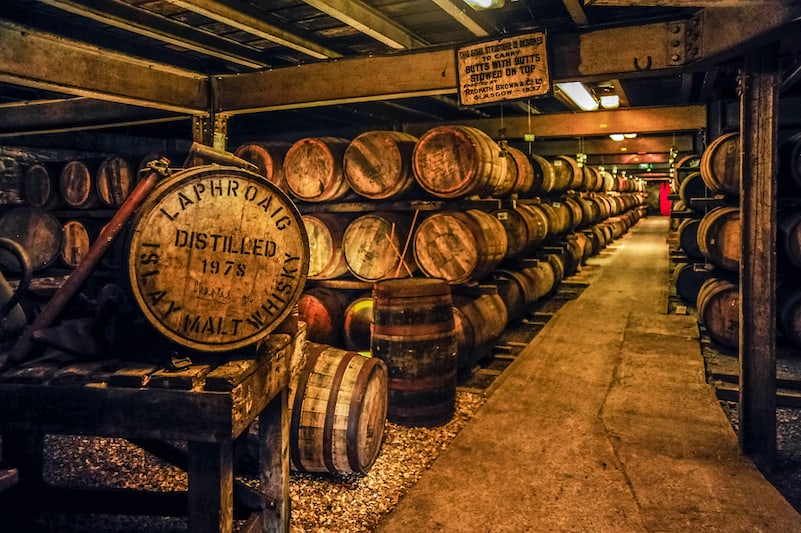 The 15 Best Whiskey Distilleries To Visit in America

There are many brilliant whiskey distilleries all across America. While many are situated in the heartland of bourbon, Kentucky, there are many other states which produce their own special brand of whiskey.

We took into account many factors for this list such as their history, how unique they are, how good the tour is, and what you get to taste! We’ve looked at some of the huge brands while also giving a nod to some smaller ones too.

We’ve got distilleries here from north and south, and from the west coast to the east coast. Join us as we take a look at the 15 best distilleries in America where you can see how your favorite whiskey is made and taste it for yourself! 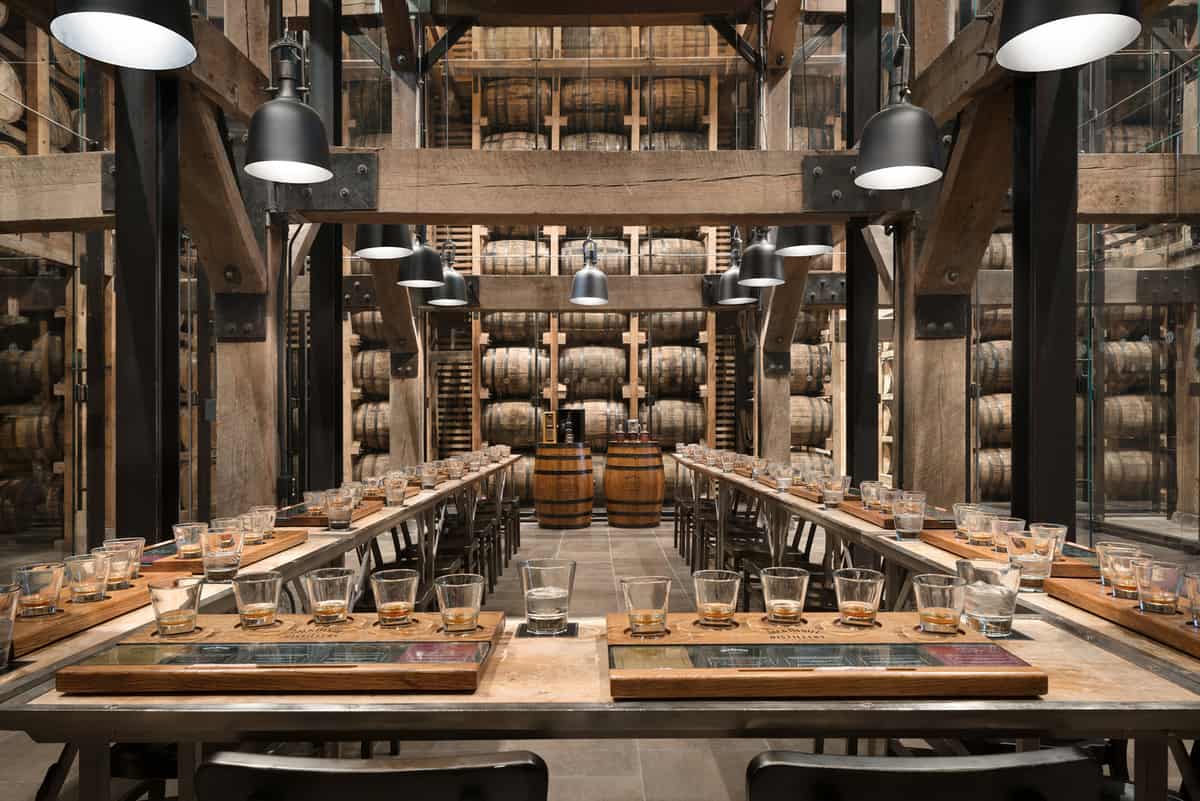 We might as well start with the obvious one! Jack Daniel’s is the most famous brand of whiskey in the world. Even for those that prefer Scotch, these historical grounds deserve to be visited.

Situated in Lynchburg, Tennessee, you get to learn plenty about the history here and you’ll be drowned in their traditions. This includes seeing the original rickhouse along with their offices, which were there before prohibition.

The grounds are great to visit and you’ll see the natural spring that Jack Daniel’s uses for all their whiskey. The tours are very well done and there are plenty of rare whiskeys for you to buy in their store. It may be an obvious one but if you love whiskey, you have to visit Jack Daniel’s. 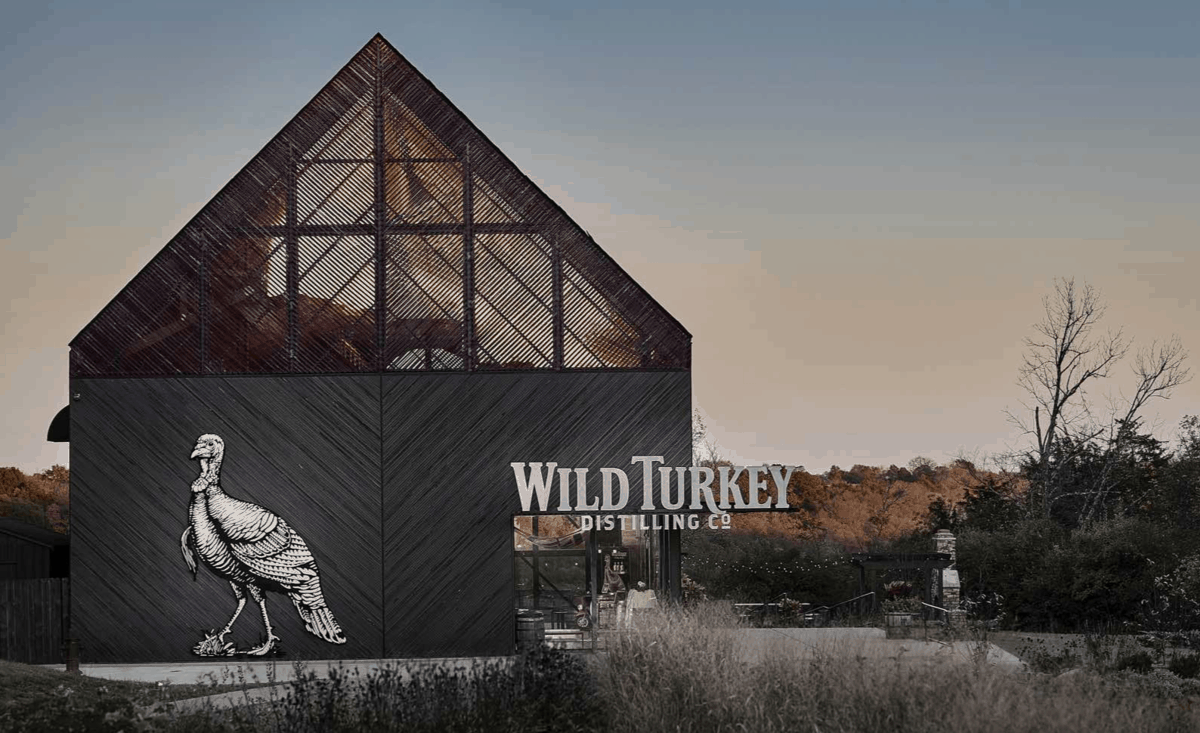 In many ways, the Wild Turkey distillery is the complete opposite of the Jack Daniel’s compound. This distillery is one of the most modern you’ll find. Their visitor center is a stunning piece of 21st-century architecture, which is in contrast to their whiskey-making methods.

The brand still distills whiskey in the same traditional way that it always has. The new section of the distillery opened in 2014 and contains both a store and museum. Its tours are quite cheap and you’ll get a full view of their operation, along with a tasting.

Situated in Lawrenceburg, Kentucky, it’s a beautiful place to visit and the whiskey is a small part of the whole experience. 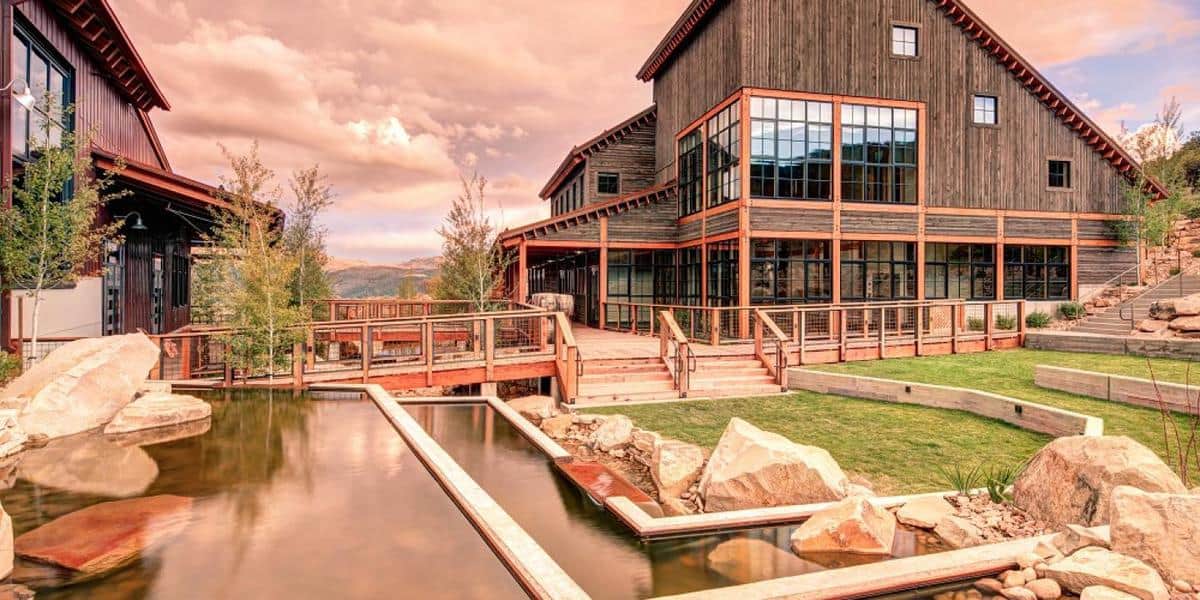 The majority of the great American distilleries can be found in Kentucky and Tennessee but there are plenty of exceptions, with one of them being High West in Utah. It’s the oldest distillery in the state and is even situated at the bottom of a ski run!

It’s one of the more intimate distilleries on the list and is a picturesque place to visit. You can enjoy the tour and then buy your favorite bottle from the shop.

After that, you can find a nice spot and enjoy a tipple in a place surrounded by natural beauty. The perfect whiskey experience. 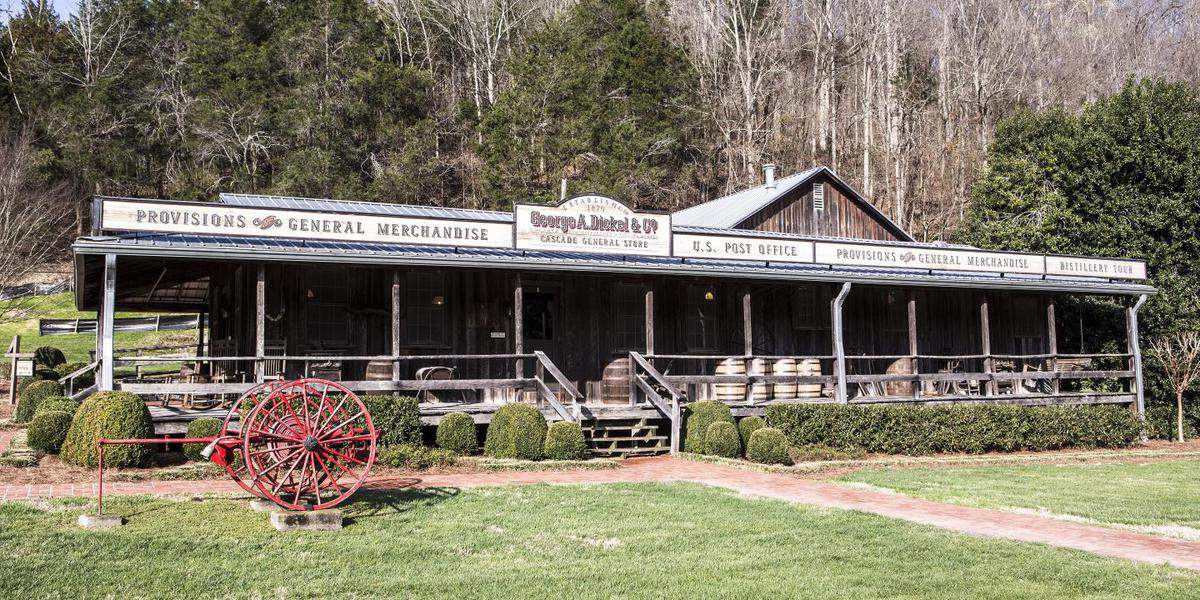 A lot of the distilleries on this list are huge companies with large visitor centers. If you’re looking for something a little more quaint and authentic then visiting the George Dickel distillery in Tullahoma, Tennessee is a great idea.

It’s a throwback to times gone by and you’ll love immersing yourself in a site that doesn’t even have a computer. It’s probably the most charming distillery on this list and non-tasting tours are even free.

We’d recommend the cheap tasting tour to get the full experience and enjoy your trip back in time. 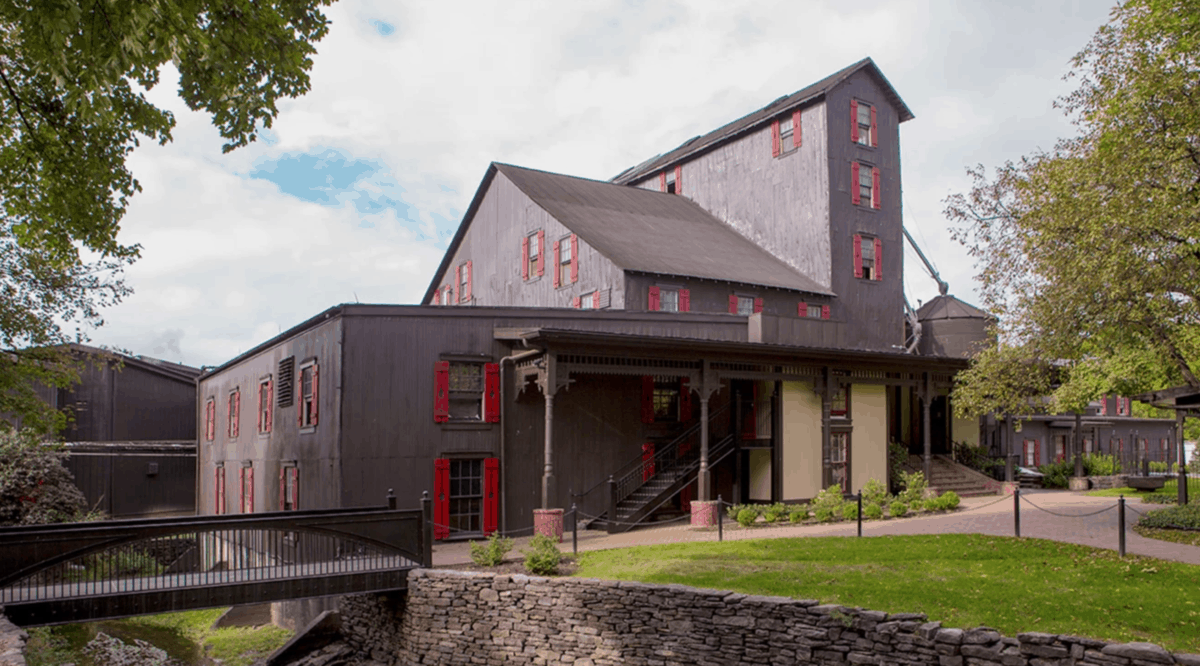 Another one of the great Kentucky distilleries is Maker’s Mark. Situated in Loretto, the site is notable for its huge grounds which not only have a fantastic distillery but also beautiful gardens. It has plenty of heritage too with whiskey being made on the site since 1805.

Throughout the tour, you can get a sense of just how much Maker’s Mark cares about their whiskey. In a world where automation is ever-increasing, it gives you a warm feeling to see practices such as the bottle cap being dipped in wax by hand.

As with many of these distilleries, the tours are very reasonably priced and this one offers you a taste of five of their bourbons. 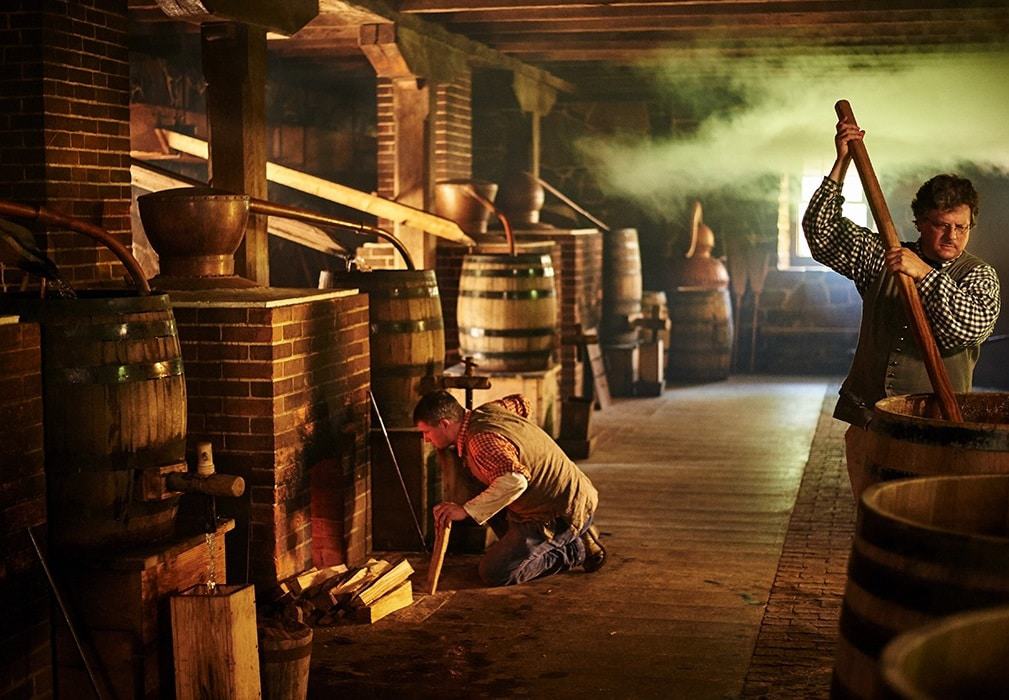 Mount Vernon is commonly known as George Washington’s distillery. It was the brainchild of his Plantation Manager who opened up a new income stream for the former president. It’s a site that shares much of America’s history.

Unfortunately, a fire a few years after Washington’s death ended the whiskey business. But in 2007, the site was rebuilt as an exact copy of how it once stood, using the same methods.

It’s a step back into the past where you learn a lot about the slave trade, Washington’s life, and the whiskey-making process. 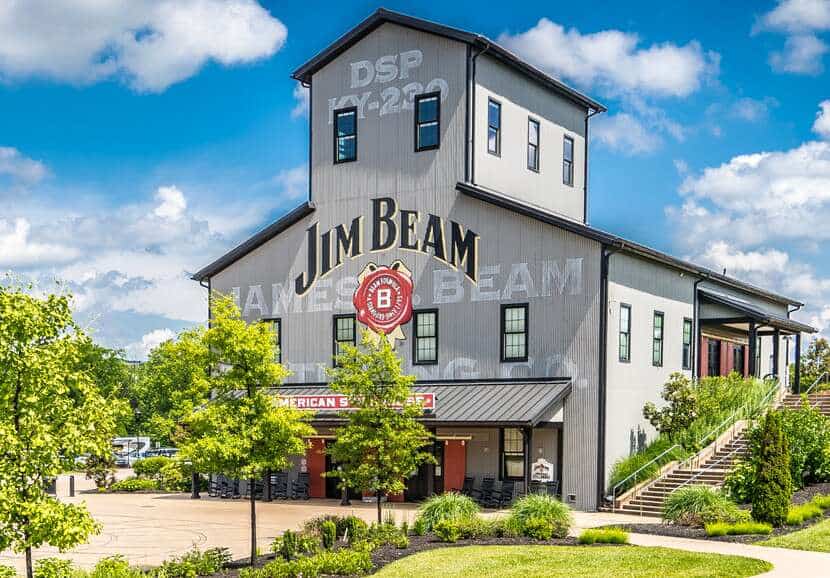 Jim Beam is another one of the giants when it comes to American whiskey. The hugely popular brand has been making spirits since way back in 1795. You get to sample plenty of that history when you visit their incredible distillery in Clermont, Kentucky.

The tour is a long one as it takes around 90 minutes but is relatively cheap. And as with all good tours, you’ll get to have a tasting at the end of it.

They market themselves as the birthplace of bourbon and there’s nowhere better to go for a lover of the spirit. A special touch of this distillery is that you will get to see the full process which finishes with being able to bottle your own drink. 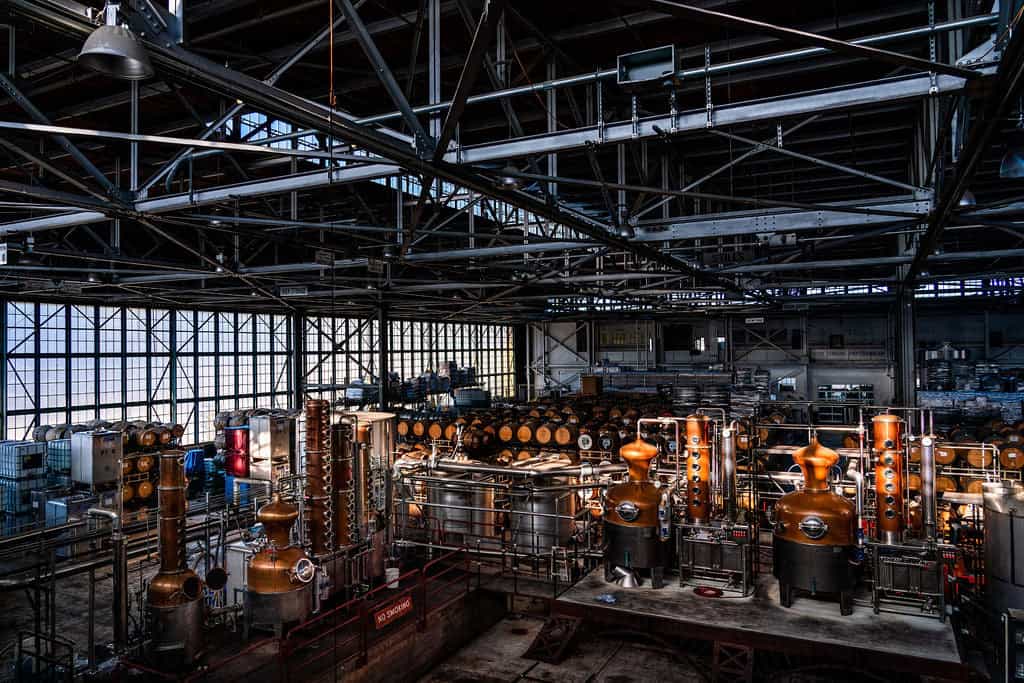 With St. George Spirits we take a trip over to the west coast. There aren’t too many great distilleries on that side of the country but this one probably tops the list.

They’ve only been going for a little over 30 years but in that time have expanded from a one-man operation into the humongous distillery that they have today.

Not only do they make great whiskey at the site, but as the name suggests, they do plenty of other spirits too. You’ll get to sample these on your tour, such as their absinthe, gin, brandy, and liqueur. If you love more than just whiskey, it’s a brilliant experience. 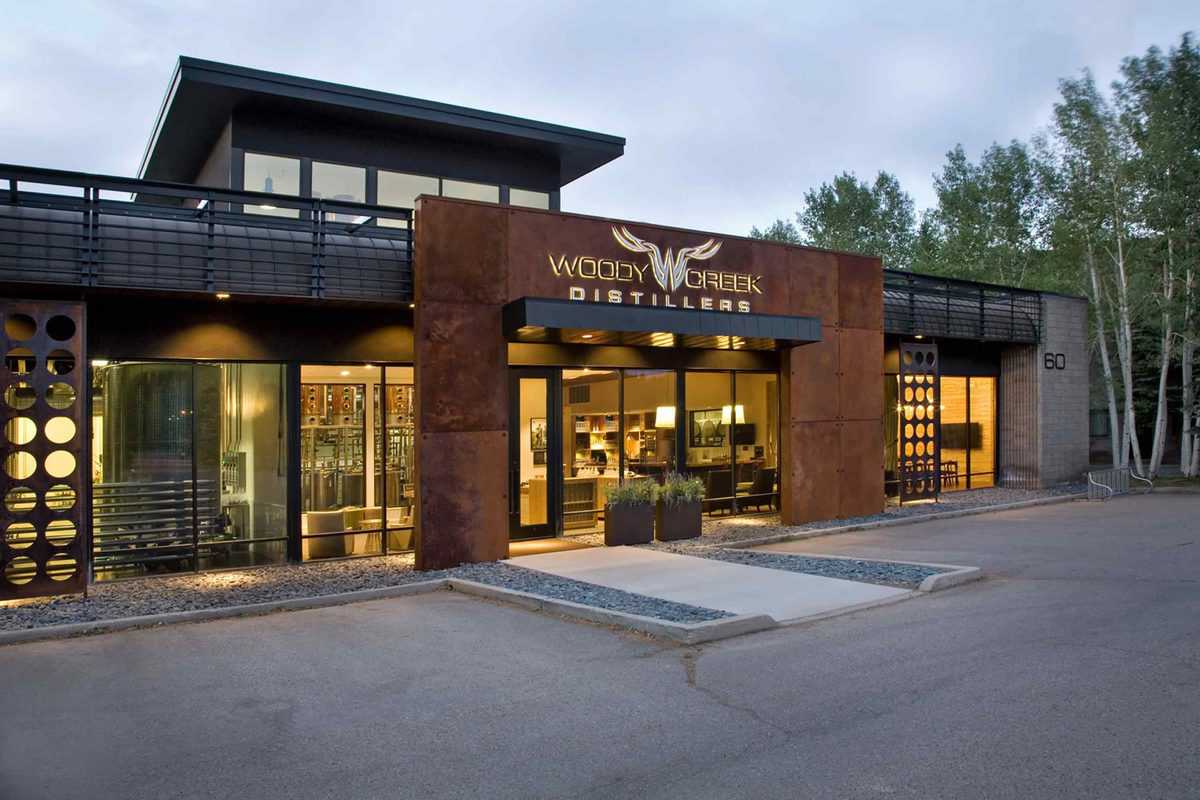 Woody Creek is another distiller that sells more than just whiskey. They specialize in making vodka but also sell high-quality white gin too. Along with this is not only a bourbon but also a rye whiskey. It’s a wonderful range of spirits.

This is one of the more modern distilleries and you’ll be taken aback by the beautiful architecture of its main building. They also have a relaxed and social tasting room where you can chill out and enjoy everything they have to offer.

The tour is quite personal and you’ll receive plenty of fascinating facts. If you’re on the west coast and want to visit a great distillery, this is the one for you. 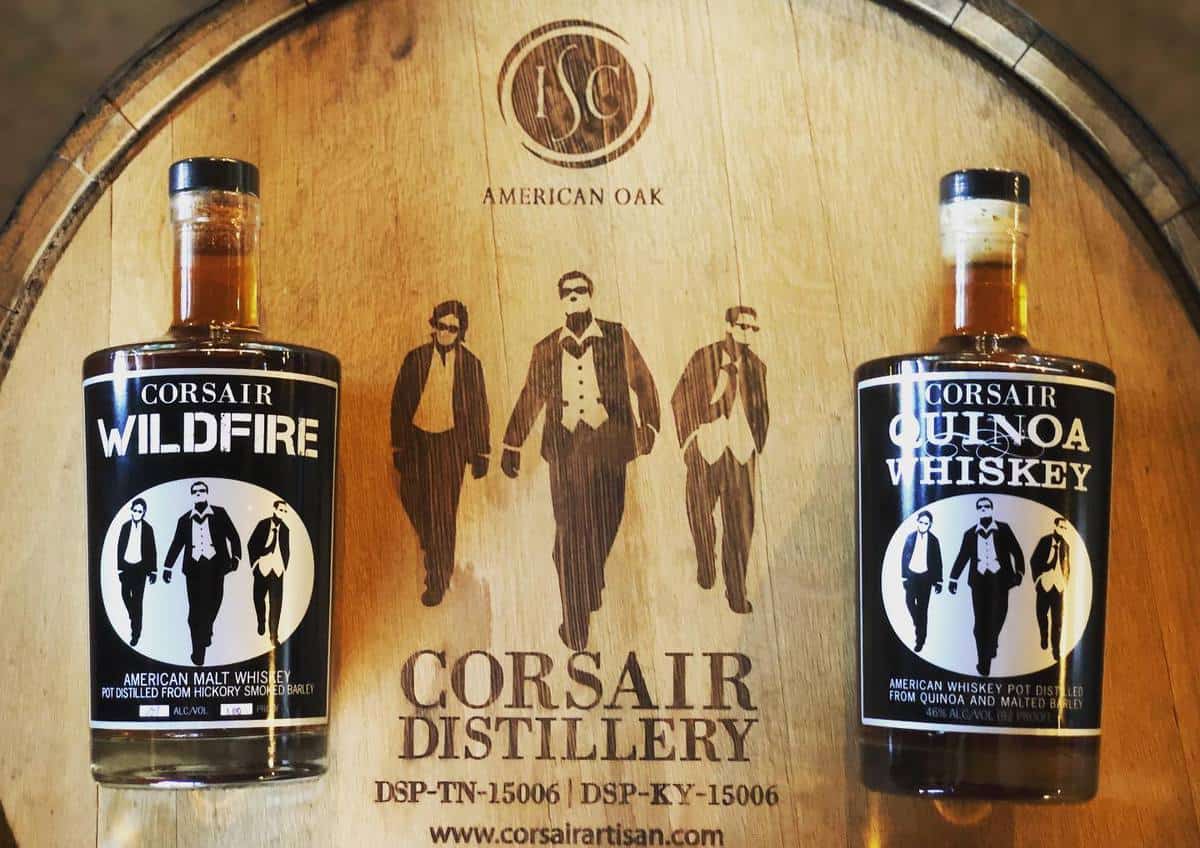 For those who want to visit a craft distillery, you’ll love Corsair. Tennessee is the home to plenty of classic old whiskey distilleries but this one is a little different.

They are perfectly set up for guests. On the production side, you’ll get to see it all, such as their unique pot still and bottling line. Along with this, they have a couple of bars, a gift shop, and even an outdoor deck where you can play games.

Corsair also offers a special type of tour. Run once a month and only available for six guests, you learn how to make whiskey from their Head Distiller while also getting to taste some of their rarest spirits. 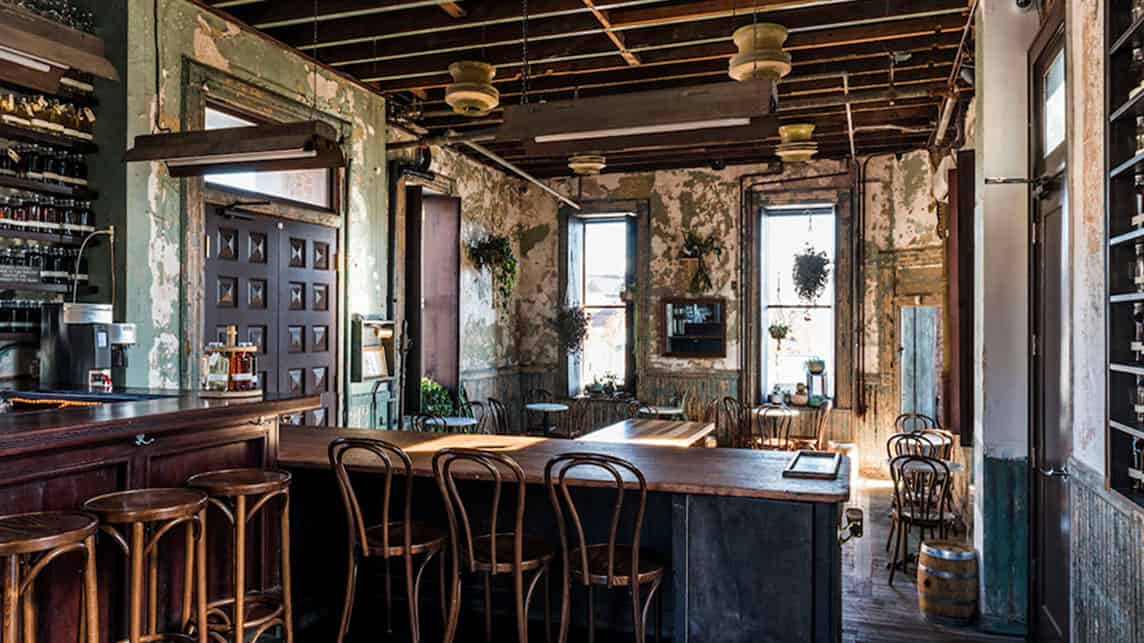 If you’re a whiskey lover who happens to find yourself in New York then you should head over to the Kings County Distillery. The city doesn’t have a rich depth of history when it comes to whiskey but the popularity of this site shows there’s a new trend for great distilleries in the region.

What’s different about Kings County is that they are highly experimental with their whiskey making. Along with single malt and bourbon, they sell the likes of chocolate and grapefruit jalapeno varieties.

They offer a few different types of tour where you can learn about their process or you can just book a whiskey tasting session. Their location is also historic too as the site is located in the Brooklyn Navy Yard. 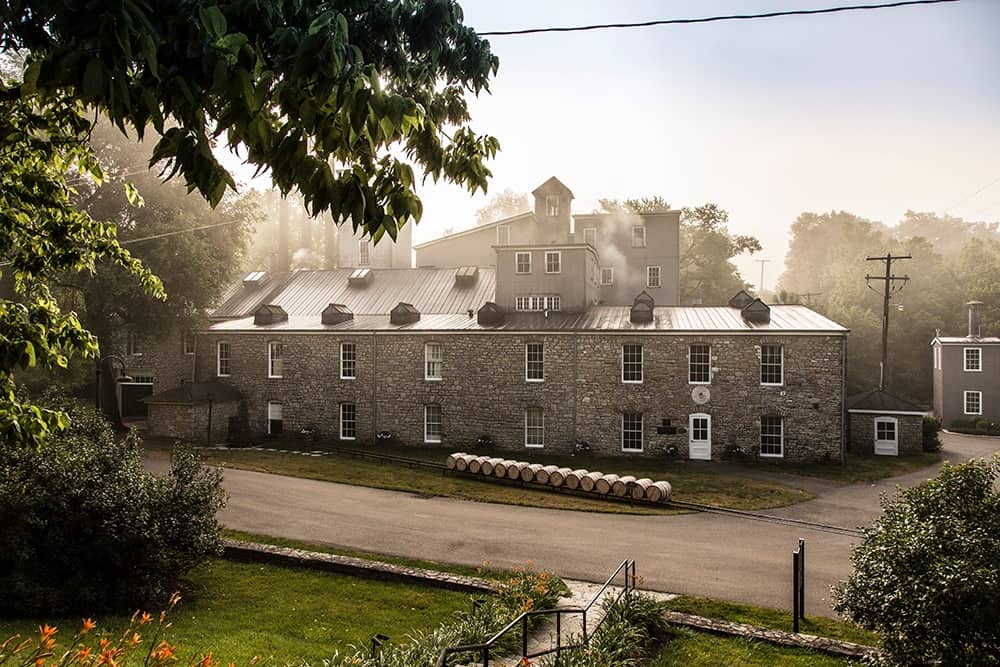 With Woodford Reserve, we end our tour of the great Kentucky distilleries. This one in Versailles is in a stunning stone building surrounded by a beautiful landscape. The barrel run is a real highlight here. You see the track where the oak barrels are rolled 500 feet downhill!

The tour is truly a fascinating experience. Not only will you get to taste some brilliant whiskeys but you’ll also get a selection of food to go with them to open up the flavor. It’s one of the more expensive tours but the two-hour option is well worth your time.

Versailles is also a beautiful city and it’s well worth visiting along with the outstanding distillery. 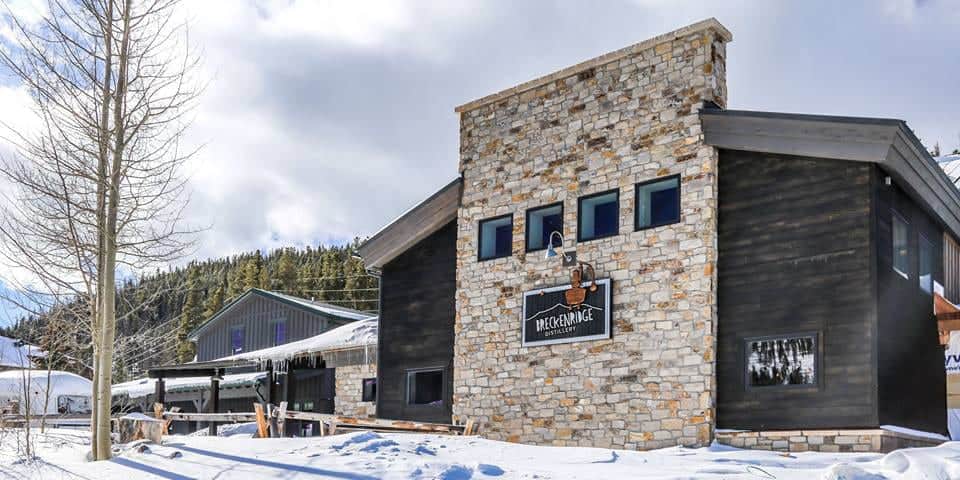 Breckenridge is another fantastic distillery in Colorado. The skiing town is often snow-capped and is a great place to visit but evidently, is also an epic place to make whiskey.

They market themselves as the world’s highest distillery but we’d probably recommend going on your whiskey tasting after you plan to ski and not before! The tour is 60 minutes long and you’ll get a personal tale of how they make their spirits.

Breckenridge makes a wide variety of different whiskeys, and while that’s their main focus, they also make rum, gin, bitter, vodka, and aquavit too. If you love skiing and spirits then this is going to be like heaven for you. 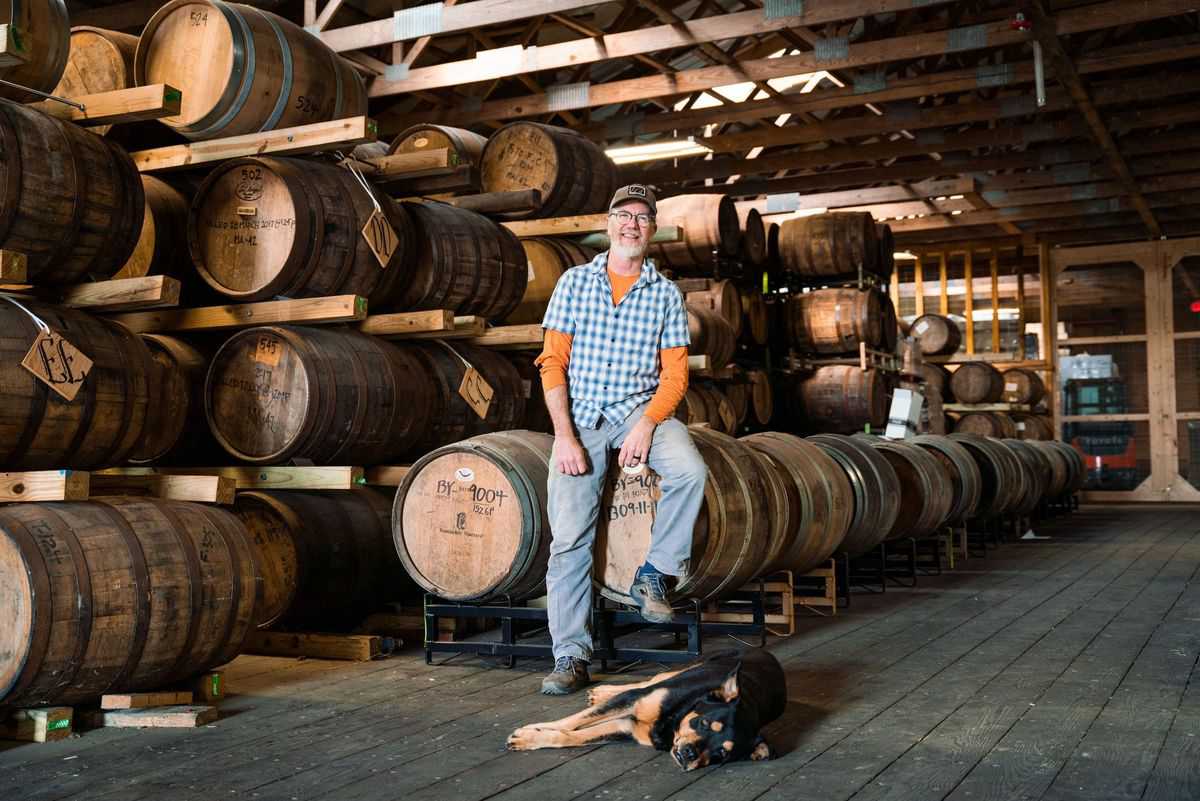 If you want to do something truly unique then Triple Eight Distillery is very special. It’s situated in one of the most beautiful places in America, Nantucket. The distillery is combined with Cisco Brewers Inc. so you’ll find an incredible range of drinks here.

In terms of whiskey, they have 12 and 15-year-old single malts along with an acclaimed bourbon. When you’re finished with your whiskey tasting you can sample one of their bespoke vodkas or perhaps their wide range of craft cocktails.

Nantucket is a place you should visit for a wide range of reasons. You’ll fall head over heels with the island along with loving this distillery. 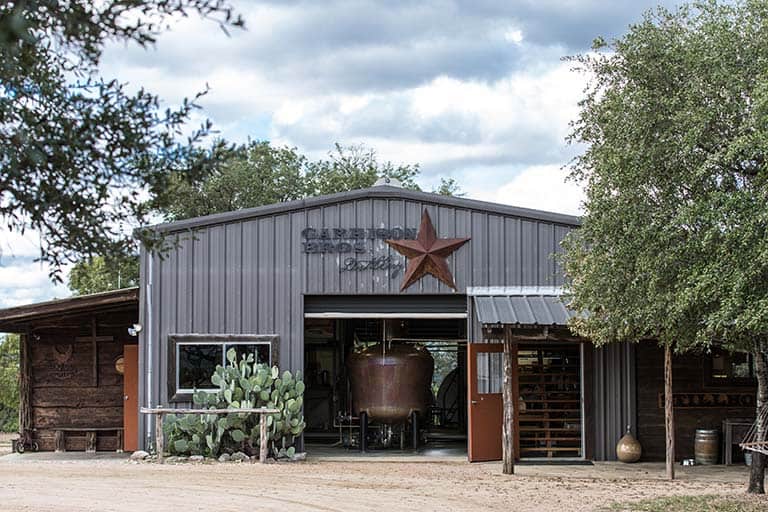 Texas isn’t perhaps known for its whiskey but with a place as special as Garrison Brothers, perhaps it should be. They make brilliant bourbon here but also present it in a few different flavors.

The site is over 68 acres and is still a working ranch. Due to this, tours can take anywhere from one to two hours. Don’t worry about getting too tired as you’ll be taken from one stop to the next on a rustic flatbed.

It’s a unique distillery and one that doesn’t worry about taking itself too seriously. You’ll get a huge Texan welcome and leave with an even bigger smile on your face.