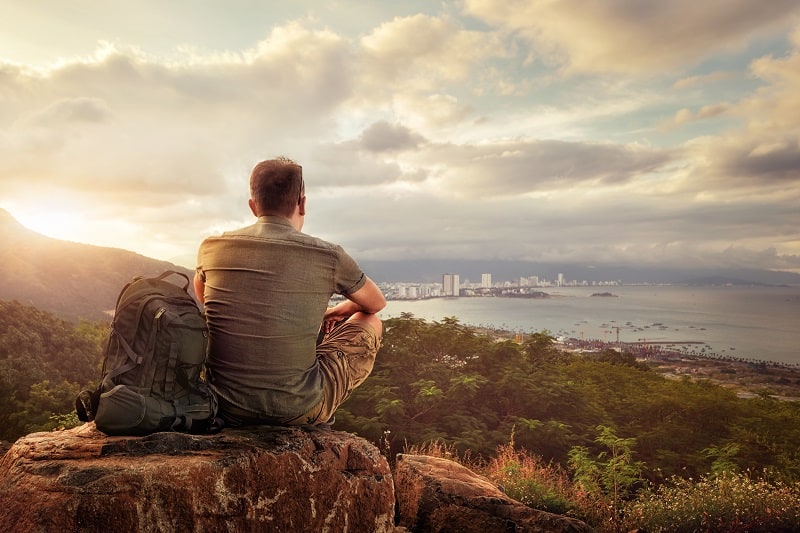 Try to convince yourself your mind hasn’t wandered off to distant lands over the last year, go on – I dare you. Whatever way you look at it, it’s a pointless chore. We’ve been on lockdown. We’ve hardly gone anywhere. And quite frankly, many of us are itching to pack our bags and jump on the next moving thing we see, be it an airplane to distant shores or the downtown bus to the mall.

Even if given free rein tomorrow to grab your passport and jet off to wherever your heart – and Instagram fed eyes – wanted to go, where would you flee? It’s a decision most likely deserving of some time to consider; nobody wants to find themselves back at the baggage carousel fighting for space to then be shoulder to shoulder on a packed beach with sand kicked in their face.

In the world of travel, there are specific spaces and regions that call out to the everyday traveler for various reasons: some permeate mystery, others have historical significance, and a few simply enthrall with an utter exhibition of outstanding natural beauty. They never seem to go out of fashion.

So, with an optimistic post-pandemic lens, we shift through the all-timers and highlight the excursions promising to nourish the cooped-up soul which has hankered to voyage. Just be sure your passport hasn’t expired. 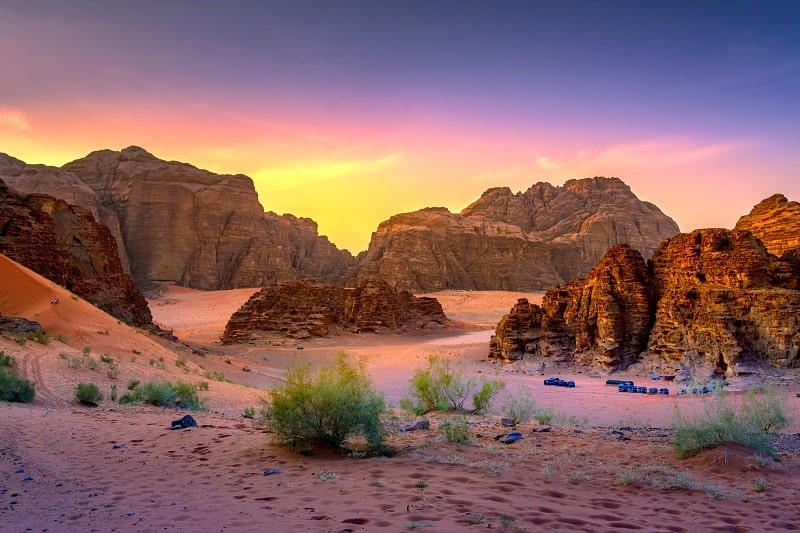 Haunting beauty and a sense of timelessness.

For centuries visitors have been astounded with the raw natural majesty of its desert landscapes and ancient history. Today Jordan is a haven from rumbling conflict in the west, but don’t let this put you off visiting this country. For any adventurous traveler, you’ll be met with an opulent blend of unique antiquity, prospering modernity, and a definitive wilderness.

Recommended: Jordan possesses some imposing forms of nature’s architectural-esque workings. Sandstone pillars, valleys, and rock walls attract those willing to try their hand at rock climbing the Wadi Rum’s jebels (mountains); from the highest peak of Jebel Um-Adaami, you can gaze into neighboring Saudi Arabia. 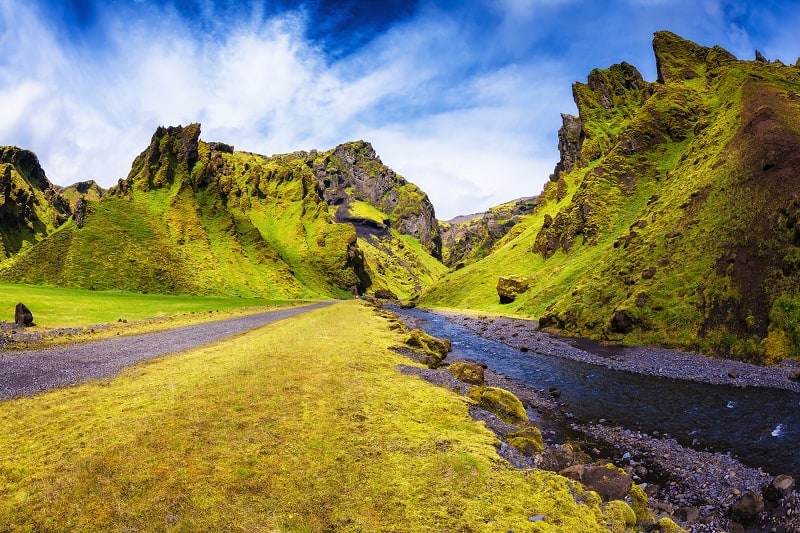 Where fire and ice collide.

Brought into the media mainstream in the last decade or so, this Nordic country has beguiling culture and geography, unlike anything you’re likely to have been to before. The entirety of the population’s electrical demands is met and even surpassed by geothermally produced power. This dramatic landscape plays host to an abundant collection of waterfalls, mountains – some of which are, in fact, volcanoes – fjords, and glaciers. Your eyes will be truly spoilt by all the natural wonder on this island nation in the Atlantic Ocean.

Recommended: Camping is where Iceland truly comes into its own – but it’s suggested you try your hand in the warmer summer months as temperatures can still plummet at night. In Southern Iceland, Pakgil is an area with impeccable camping conditions and has more than enough activities to keep you occupied for days. 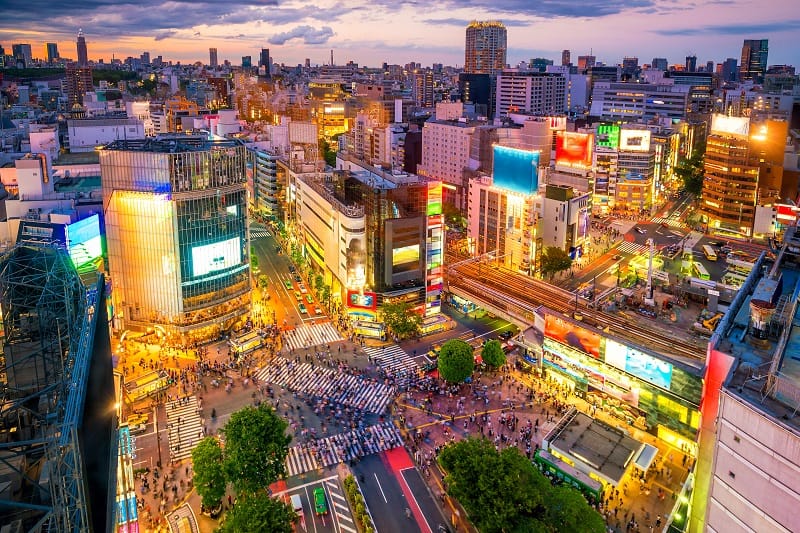 An intoxicating culture of food, manners, and traditions.

For centuries this Asian country with its string of islands scattered across the North West Pacific intrigued those from the west. A thriving global superpower with solid roots in tradition and customs, you can expect to witness an ultra-dynamic demography of people and lifestyles from huge sprawling cities to remote countryside farming communities. Food is where Japan comes together, and for those with a deep interest in cuisine, the endless pursuit of appreciating Japan’s unique flavors is a lifelong endeavor.

Recommended: Often regarded as the world’s largest city, Tokyo is a sight to behold. Spend some time traveling her expansive suburbs and coming face to face with colorful street art and high fashion in Harajuku and the world-famous Shibuya Crossing. 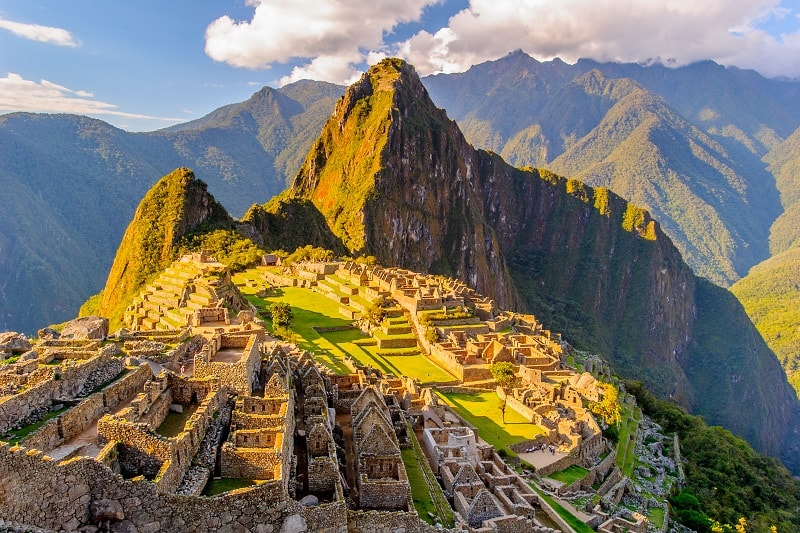 The heart of ancient South America.

Situated as far as any other country is from Europe, this South American nation was an essential part of the Spanish colonization of the continent. The culture today is as unique as the intricate weavings for which it is made famous. Lush jungles include sections of the Amazon where you can spot rare birds of paradise, and chiseled mountain ranges contain ancient Inca history gripping visitors’ imaginations for decades. Food and Festivals go hand in hand but be warned, the latter of the two can swallow up even the most organized traveler for days.

Recommended: No first-time trip to Peru is quite complete without an excursion to the ancient citadel of Machu Picchu. However, also known as the Cloud Warriors, the Chachapoyas people were thriving in Peru well before the Inca. They alone constructed the enormous and prolific ruins of lesser-known Kuelap. Should you have the chance, a visit to this reasonably unknown site high in the Andes Mountains of northern Peru is one you won’t regret. 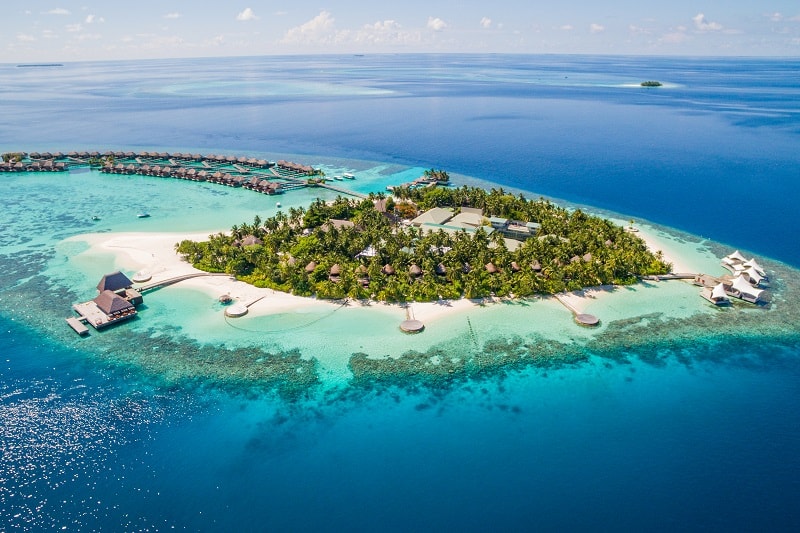 This island nation in the Indian Ocean is nothing short of what most people envisage a tropical paradise to be like. The archipelagic state comprises nearly 1,200 islands scattered across 26 different atolls and stretches 540 miles from North to South. If being in the ocean and occupying yourself with sailing, diving, and surfing is your thing: look no further.

Islands vary in size, and even by occupancy, with many of these uninhabited and looking like somewhere you might find Tom Hanks and his friend Wilson. Recent changes have meant locals can now build guesthouses and hotels – making it much more affordable for anyone to visit – this said, it is expected tourists will flock here in droves, no longer forced to stay in lavish five and six-star resorts.

Recommended: Should you be a surfer – or not – the mellow intermediate style waves found around much of the country may be the stuff of surf magazine fantasy – but are still very much anyone’s for the taking. The primary season is between April and June but come a month either side of this, and you can expect to ride teal waves straight out of your wettest dreams. 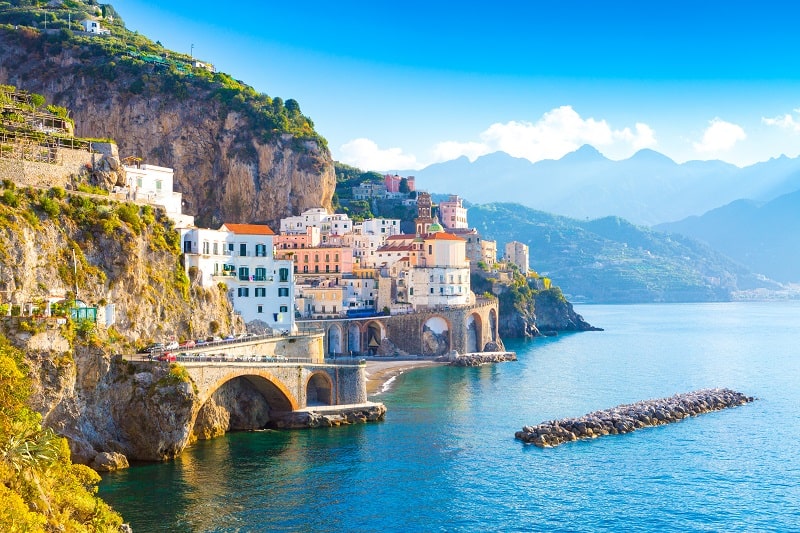 Vintage nostalgia with lashings of flavor.

Bright and cheery Italy is a must-visit country for anyone of any background. Period. From the Roman Empire and the dusty floor of the Colosseum and the Mediterranean fringed luxury filled coastlines to the high mountains and lakes of the Alto Adige bordering Austria to the north, this diverse nation pairs history with perhaps the modern world’s most popular gastronomies – not to mention some of the most classic and highly revered styles of wine.

Overindulging in glorious pizza and pasta is any tourist’s rite of passage, followed by exploring the many hidden cobbled streets around history drenched locales, such as Florence: the epicenter of renaissance art across Europe during the 15th and 16th centuries.

Recommended: Situated on the Northwestern coastline of Liguria, Cinque Terre is the postcard destination you’ve likely seen a hundred times. But don’t let this put you off visiting. These five little fishing villages perch themselves on the steep seaside cliffs and comprise multi-colored houses between small charismatic vineyard terraces with coves and harbors rife for exploring. Sample the local seafood alongside their unique wines and forget the world for an hour – or a week. 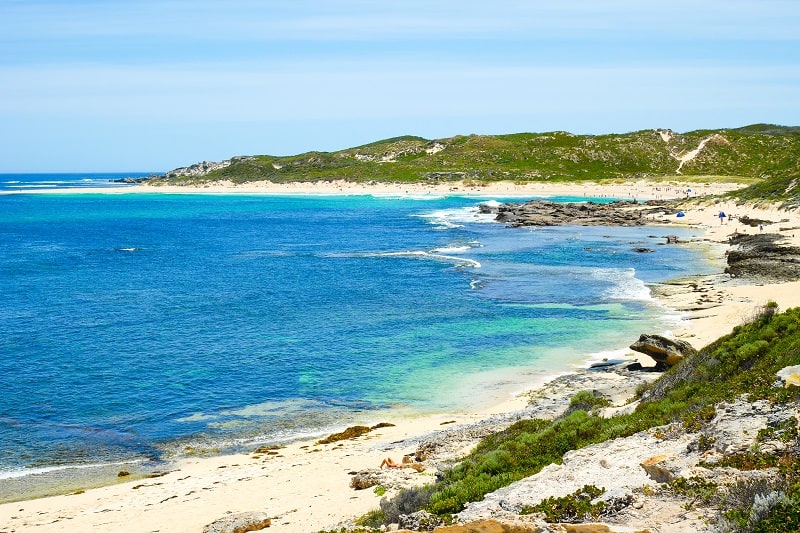 Home to the world’s oldest living culture, yet with just over 200 years under the belt as a country, Australia is a place of complete diversity. Nature and animals reign supreme here, and where you find metropolitan areas have flourished, you always feel like it has only been at the express permission of the environment. Where climate is concerned, Australia has it all.

Whether you’re skiing on the white-capped Snowy Mountains in New South Wales, dodging the incessant rain in Melbourne’s ultra-chic laneways, or laying your towel on the pristine beaches of Queensland’s Gold Coast – with over 300 days a year of sunshine – the choice is entirely in your hands. For a true sense of the land down under, head to the outback and feed all your senses with amazing local produce and art hubs that encapsulate the enigmatic first peoples and their 17,000+-year-old history.

Recommended: Take a trip to the stunning Margaret River region in Western Australia for deserted beaches and uncrowded national parks as far as the eyes can see. Once you’ve visited vista-filled vineyards and sampled world-class wine, it’ll be high time to watch a sunset you won’t forget out over the Indian Ocean. 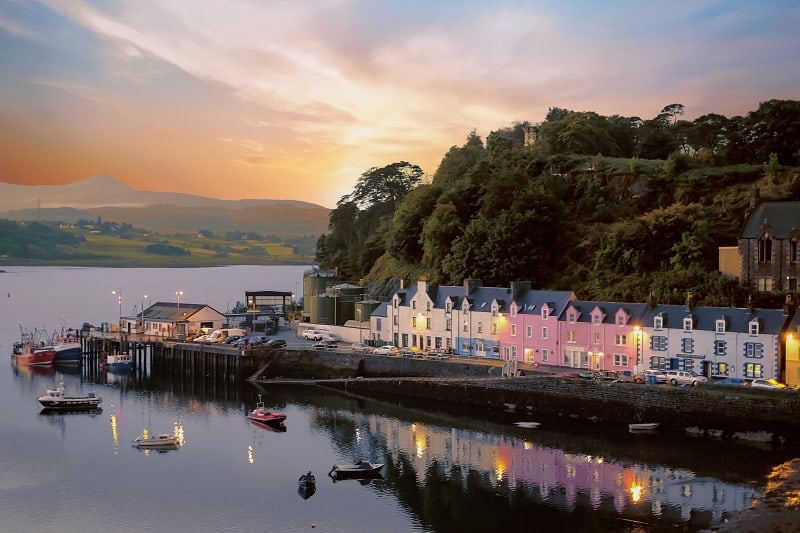 Rugged, yet friendly, and bursting with stories.

Today Scotland presents as a proud nation steeped in an often-turbulent history. Scars of battles with neighboring England – and internal disputes between the clans – are almost everywhere you look, and it’s a past that, whilst was bloody, is also absolutely riveting.

With a small population, it doesn’t take much effort to find yourself lost in one of western Europe’s last great wildernesses with abundant lochs and castles littered across the hilly and lush countryside – you may be in one of the richest and developed parts of the world but take a wondering drive through the highlands and upper north coast, and you’ll find villages and hamlets time forgot. Find your way into the bustling cities and towns, though – old as they are – and you’ll discover a country with a healthy appetite for hearty gastronomy and the performing arts.

Recommended: The largest of the Inner Hebrides, Skye is an Island with enough charm to capture anyone’s affection. There are countless things to see and do, from slowly rambling the walkways of the magnificent Cuillin mountains, sea kayaking the many lochs and coves, to sampling fireside pub meals in quaint inns with a dram of single malt in hand – naturally.