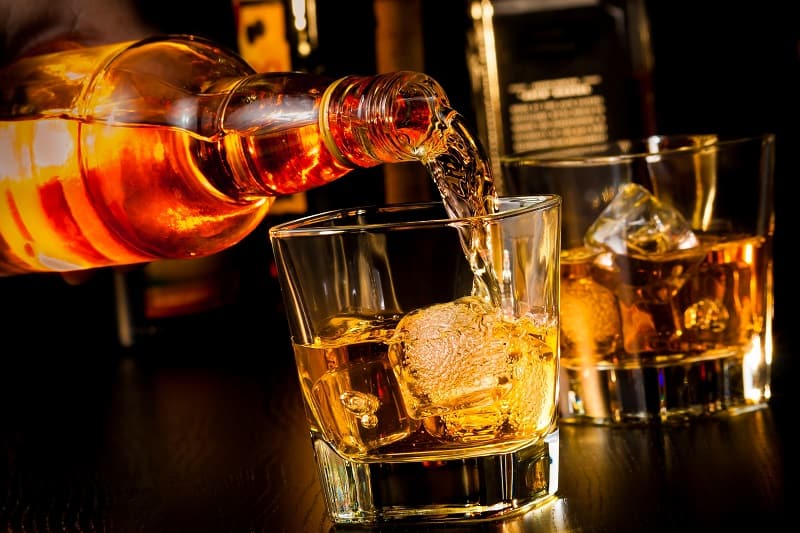 The Difference Between Bourbon and Whiskey

The difference between bourbon and whiskey is as clear as mud when you’re trying to choose between brands and bottles. Bourbon needs to be American-made, aged in oak for four years, and have at least a 51% mash bill, while other American whiskeys are made using wheat and/or rye or utilize other variations in the distillation process.

Whiskey was a term first employed during the late 1800s to differentiate Irish whiskey and American liquor from Scotch whisky and Canadian whisky (which everyone called rye). The in-vogue Japanese whisky also went with the Scotch spelling (click here for the full breakdown of whisky versus whiskey).

The following article defines what mash bill is needed to make bourbon, but also identifies the other major American whiskey styles, bottled-in-bond, Tennessee whiskey, and single malt varieties that are beginning to become more prevalent in the US.

What Makes a Liquor Bourbon?

A frequent refrain that can be heard in Kentucky is: “Not every whiskey is a bourbon, but every bourbon is a whiskey.” To be called bourbon:

The liquor needs to be crafted from at least a 51% corn fermented grain mash bill that has been stored in charred oak barrels for four years. The spirit must have been distilled within the United States.

95% of the bourbon whiskey bottled in the U.S. is distilled in the state of Kentucky.

Is All Bourbon From Kentucky?

Kentucky is considered bourbon country, and your home bar is most likely to be stocked with expressions from the Bluegrass state. The majority of bourbon has been distilled in Kentucky since American whiskey production was drawn from the corn-producing farms of the 1700s.

Despite this, other regions – such as Tennessee, Colorado, California, and even New York – are beginning to craft and/or bottle amazing bourbon expressions. Just like with peat and barley malt for Irish whiskey and single malt and blended Scotch in the British Isles, your liquor of choice comes from the source material.

Finding the best Kentucky bourbon is like finding the best single malt Scotch – it’s entirely subjective and based on a wide variety of factors including flavor, taste, aroma, price, and accessibility.

Wheated bourbons are those made with a large proportion of the mash bills secondary grain being wheat, in addition to the mandated 51% minimum corn. Wheat as the secondary grain provides subtlety and contrast, adding a creaminess and gradual sweetness to the spirit than that derived from the majority corn, malted barley, or rye recipe.

Wheat is also useful during oak barrel aging, with a tendency to age much better than many traditional bourbons (up to around the 20 year mark).

The Bottled-in-Bond Act of 1897 was a set of legal regulations created by the U.S. Government to standardize and authenticate the quality of American distilled alcoholic beverages, especially bourbon, wheat, and rye whiskey.

Prior to the time the Bottled-in-Bond Act was legislated, the American whiskey market was being decimated by inferior quality, unregulated booze. Bottled-in-bond is a whiskey label that adheres to a set of legal regulations contained in the United States government’s Standards of Identity for Distilled Spirits.

The regulatory jargon breaks down as follows:

If you purchase a bourbon whiskey or rye labeled bottled-in-bond the regulations from the Act must be met.

For a spirit to call itself American rye whiskey, the grain mash must be made up of at least 51% actual malted rye cereal grain.

Aside from the straight rye whiskey, you’ll find some rye mash bills filled out with brown sugar, corn, or malted barley, or have the wooden barrel finish in wine, rum, or brandy casks to add another flavor dimension.

Single malt and blended whiskey expressions made from malted barley are becoming more popular craft spirits in the U.S.

With Scotch whisky at its highest popularity level of all time and the emergence of Japanese whisky as a power player in the billion-dollar market for blended malt whisky, there’s an opportunity for local distillers to make quality single malt. While it lacks the cultural cachet of Scotch, American malt whisky is meticulously crafted and caters well to craft distillation.

There’s a simple, yet important distinction between Kentucky bourbon and Tennessee whiskey which makes a huge impact on the taste and what goes on the label. The crucial difference is that Tennessee whiskey is filtered through sugar maple charcoal as part of the Lincoln County Process, a charcoal filtration method in which fresh whiskey passes through charcoal chips and is then put in oak casks for maturation.

For a whiskey to attain the Tennessee label, it must go through the charcoal mellowing stage, in the state of Tennessee.

To be called bourbon, your whiskey needs to be distilled in America for a minimum of four years in oak barrels, with a mash bill of at least 51% corn. If it’s predominantly rye, wheat, or malt grain-based, then by law the spirit can’t be called bourbon.

Figuring out what constitutes whisky or whiskey is a lot simpler than in the past when nobody really knew what was going on. The simplest way to remember is If the country of origin has an “e” in it, then spell it whiskey. See, clear as mud!