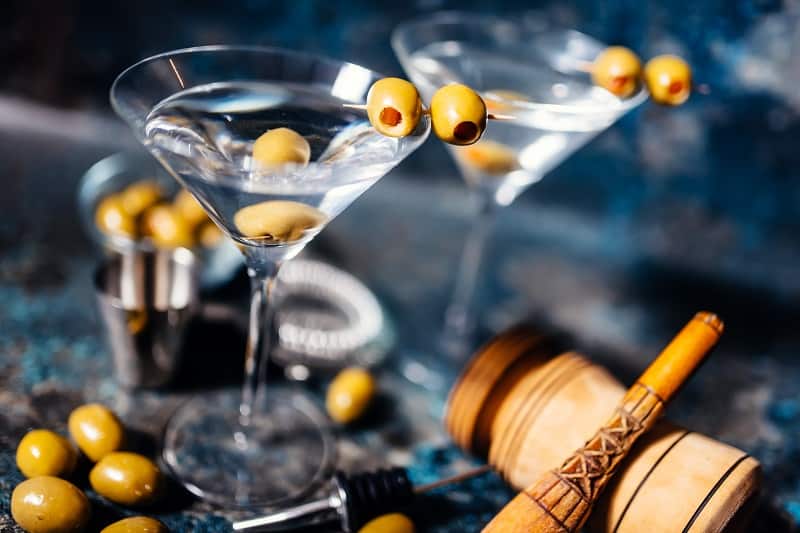 How To Order A Martini – The Definitive Martini Cocktail Guide

You walk up to the bar with James Bond confidence and go to order a martini. You know the timeless line, “shaken not stirred”. Easy right? Then the bartender starts talking about martini types like dry or wet, gin or vodka, etc.

Suddenly you find yourself going oh sh-t. Should I have gotten it extra dry or extra dirty instead? Why did I order it with a twist? There is a spiraled lemon peel in my drink now..

Don’t worry, it happens to almost everyone the first time they order a martini. The truth is, it’s super easy to order one with just a little bit of knowledge. I’ll teach you everything from A to Z below, so the next time you’re at the bar, the martini you order will be one you actually enjoy.

Oh yeah, I’m also going to show you a handful of famous gentlemen who were quite enthusiastic about drinking martinis too. Along with their own personal favorite recipes.

What is in a martini? 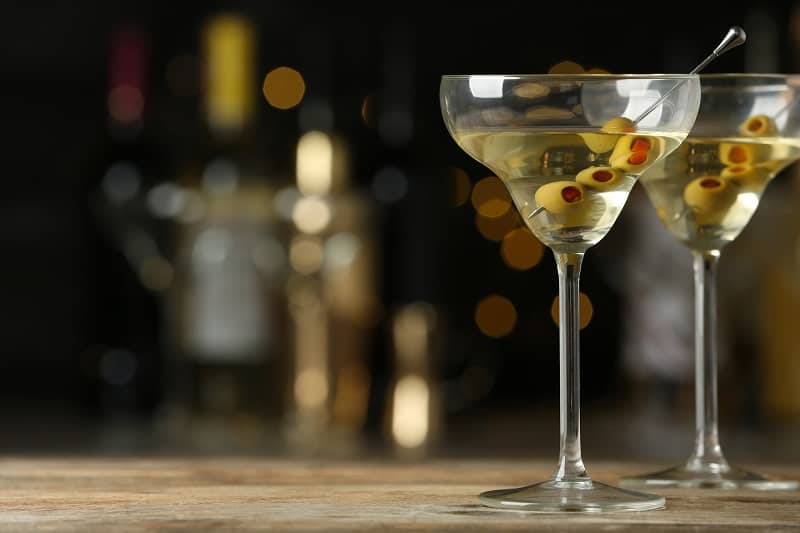 Let’s start with the basics, what is a martini to begin with? The classic martini is simply a cocktail with gin and vermouth. For every four parts of gin you add one part of vermouth.

To garnish, add an olive on a skewer. Believe it not, but that’s all there is to this classic drink. But here’s where it can get a bit confusing for your first time.

Types of Martinis & How To Order Them 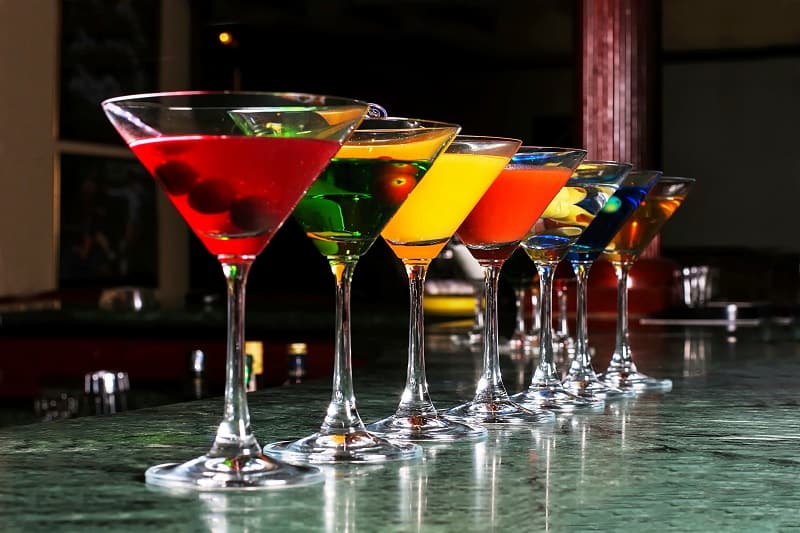 A dry martini means one thing: Less vermouth. (Vermouth is a wine enhanced with botanicals for flavor) A standard rule of thumb is that a dry martini will often contain 5 to 6 parts of gin to 1 part vermouth.
If you ask for extra dry, it means little to no vermouth. Often bartenders will just roll vermouth inside of the glass to give it a thin coating.

Now that we’ve covered the dry martini, the basics behind a wet martini are simple. It’s the opposite with more vermouth and less gin.

A perfect martini is equal parts vermouth and gin. (Though you can substitute vodka in for gin if you would like)

If you enjoy olives, order your martini dirty. Dirty means adding brine or olive juice for a little punch. If you’re not a fan of how alcohol tastes, this can help quite a bit.

Olives will add a touch of saltiness, and serve on other great purpose. I think Johnny Carson said it the best, “Happiness is finding two olives in your martini when you are hungry.” The proper way to serve is with three of them.

Asking for it “with a twist” means you’ll get a lemon peel for garnish. (Though, you can still ask for olives too if you’re hungry or just enjoy getting the extras).

A drink with its own name. Instead of the olive or lemon, it’s served with a cocktail onion (Pearl onions on a skewer) for a more earthy taste.

Though not as popularity as James Bond himself, vesper means a cocktail with: Gin, vodka, and Kina Lillet. The Kina Lillet is almost always substituted due to its rarity.
One word of caution to all those lightweights out there, it’s a stronger drink.

Now martinis were traditionally stirred, but shaken has become the most popular choice today. When you ask for shaken, the bartender will do just that. They’ll mix the drink in a cocktail shaker by shaking it vigorously with ice.

Keep in mind there is really no right or wrong way, it is a matter of personal preference. Though, martini enthusiasts often claim that stirring prevents bruising the gin.

A classic martini on its own is ordered “up” without ice. (But you don’t have to say that) What this means is it is chilled and poured. As a reminder, avoid asking for it using the terminology like “straight up”, that lingo is generally reserved for whiskey and liquor alike. The same rule applies for “neat”, which if asked means no vermouth, no chilling, just alcohol straight from the bottle.

When you order it “up”, it comes in a chilled, tall traditional martini glass. The downside is these can be troublesome to carry around a room full of people. But on the other hand, your martini has already been shaken or stirred with ice, meaning it won’t get diluted over time.

If you would like to add ice, ask for it on the rocks. When you order it “on the rocks”, it’s served in a tumbler over ice. But drink fairly quickly, or it will get diluted as the night goes on.

By default, a martini comes with Gin. If you can’t stand or don’t prefer the taste of it, vodka is another alternative you can go with. Let’s say you want Absolut vodka instead, simply tell the bartender: “Absolut martini, on the rocks with a twist.”

For a Gibson martini, the wording is a bit different: “Absolute Gibson, on the rocks with a twist.” Something to keep in mind is your bartender is not a mind reader, you must tell them what type of vodka you would like.

And one last tip, believe it or not, but some call a vodka martini a “kangaroo”. It came about in the 1950’s after a handful of books started mentioning it. Though, not all bartenders are familiar with the term yet.

Use the term “extra” for a martini that’s more dry or wet. As in “extra dry” for even less vermouth, or “extra wet” for even more vermouth. You can also ask for a “bone dry martini” which is 15 parts gin to 1 part vermouth.

How To Order For The First Time 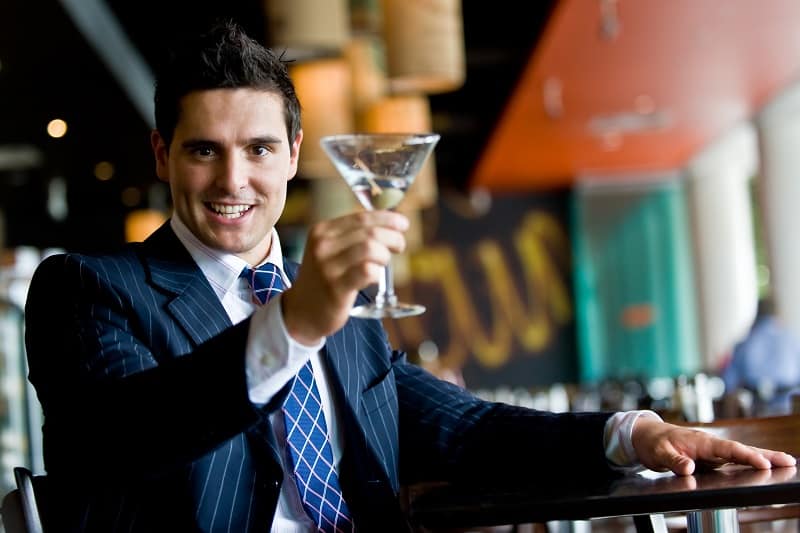 If you’re looking to order your first martini, you probably want to know what’s the best? The truth is, the best martini for your first time is a simple one.

Go with gin (Tanqueray, Bombay or Hendricks), stirred and an olive.

1. James Bond: Chances are already know his signature 007 recipe. But here’s a little something you might not know about James Bond’s martini preferences. Going back to the Casino Royale, his order goes: “3 measures of Gordon’s, 1 of vodka, 1/2 a measure of Kina Lillet. Shake it very well until it’s ice-cold, then add a large thin slice of lemon peel”.

If you try to order a “Vesper” at the bar today, most bartenders will substitute Lillet Blanc for the Kina Lillet. It’s due in part to the Lillet company phasing out the product line in the 1980s in favor of well, more favors. And if you’re wondering about Lillet Blanc, it’s supposedly made “fresher, fruitier and less bitter”.

And when it comes to James Bond’s famously known line “shaken not stirred”, many still argue that it bruises the gin and jabs the integrity of this cocktail.

2. Franklin D. Roosevelt, the 32nd U.S. president loved ordering martinis as much as he did drinking them. Rumor is he always had a “kit” on hand wherever his travels took him. In fact, when he went to go visit Stalin at the Teheran conference, he took great pleasure in personally mixing one for him.

Though Stalin didn’t quite share the same passion for them, saying it was tasty, but rather cold on the stomach. His signature style included 2 parts gin, 1 part vermoth, and olive brine, garnished with a lemon twist and olive.

3. Richard Nixon, the 37th U.S. president also took an interest in them, but unfortunately his stomach did not agree. His recipe entailed 7 parts gin to 1 part vermouth.

4. Ernest Hemingway, on the hand, enjoy his Montgomery martini with 15 parts gin to 1 part vermouth.

5. Winston Churchill once said, “Always remember that I have taken more out of alcohol than alcohol has taken out of me.” He favorite his drink to be well, a glassful of ice-cold gin with a bow in the path of France.