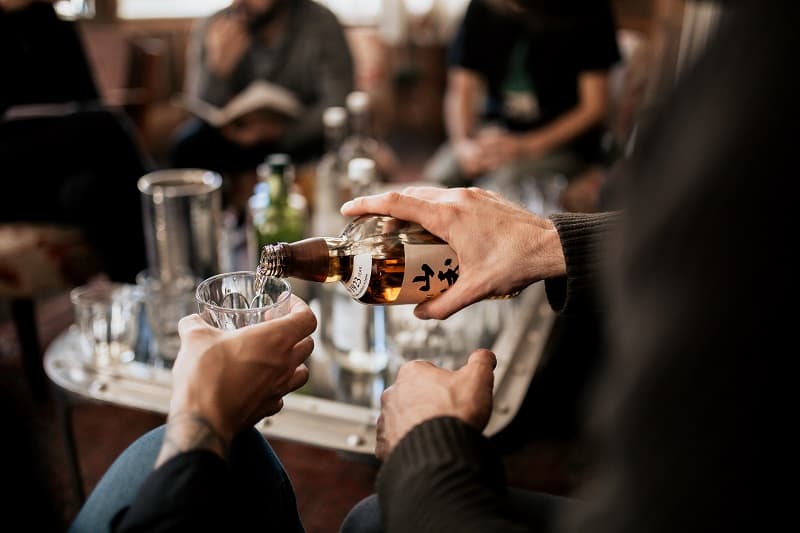 The Rise Of Japanese Whisky

Japan is typically associated with its trademark drinks, like shochu or sake, both of which enjoy centuries of traditions. However, in Japan, Western drinks like wine, beer, and whisky are just as popular as the traditional ones. While these drinks may have only become popular in Japan in recent decades, they are here to stay. This is particularly true for whisky, which the Japanese even managed to put their own spin on.

It was a bumpy road, but today Japanese whisky has gained an incredible reputation that’s recognized across the globe. Join us as we take a fascinating look into how Japan came to make some of the best whiskies in the world.

The Introduction of Whisky to Japan 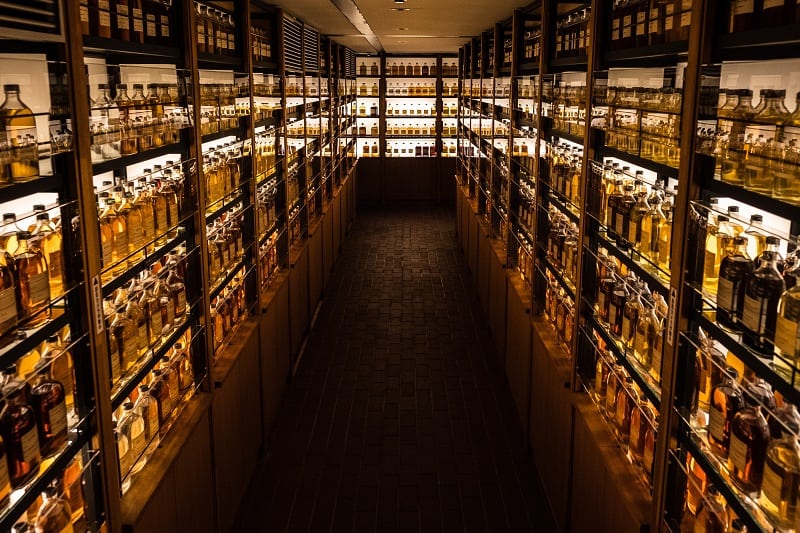 Until 1853, Japan was shut off from the Western world. That was until the American Matthew Perry arrived in Edo harbor with a few barrels of whiskey on this ship. To show what his country had to offer to the Japanese market, Perry presented them with one of the barrels. Since the Japanese hadn’t encountered this strange amber-colored drink before, they received it with reluctance.

After tasting the whiskey, the Japanese began to regularly import it through Western traders. Not only that, seeing a potential for significant profit gain, Japanese liquor manufacturers set upon recreating it themselves. It was to be the start of a Japanese love affair with whisky.

The Early Days of Whisky Production 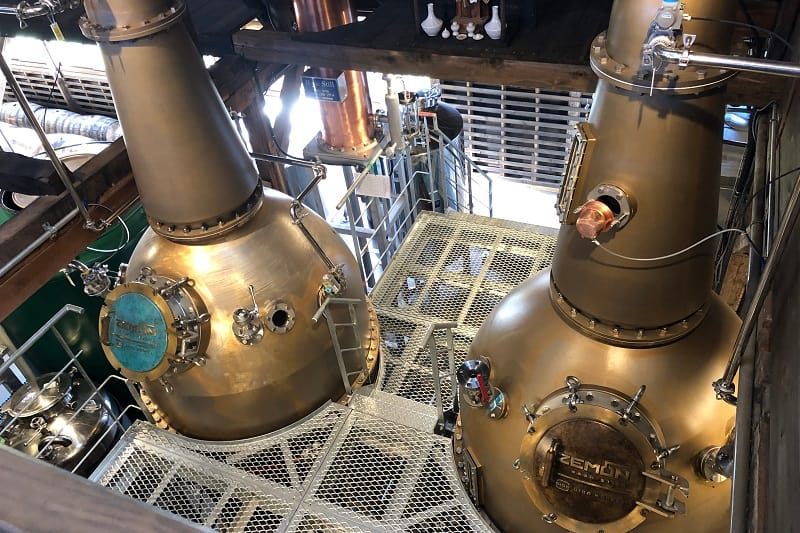 Unfortunately, even after two decades of trying, the Japanese still hadn’t managed to make whisky of the same quality as they have been importing. The best they have come up with was a whisky-colored unrefined alcoholic brew that, not unsurprisingly, was not favored by the public.

Because these drinks were often made without enough technical knowledge about proper distillation processes, they were unsafe for human consumption. When warned about these dangers by US military officers, the Japanese government recognized the need for change.

The trouble was, due to its being isolated for so long, Japan was just too far behind Western technology. So, in order to make good quality products, they needed to learn more about modern science and production technologies.

The Education of Masataka Taketsuru 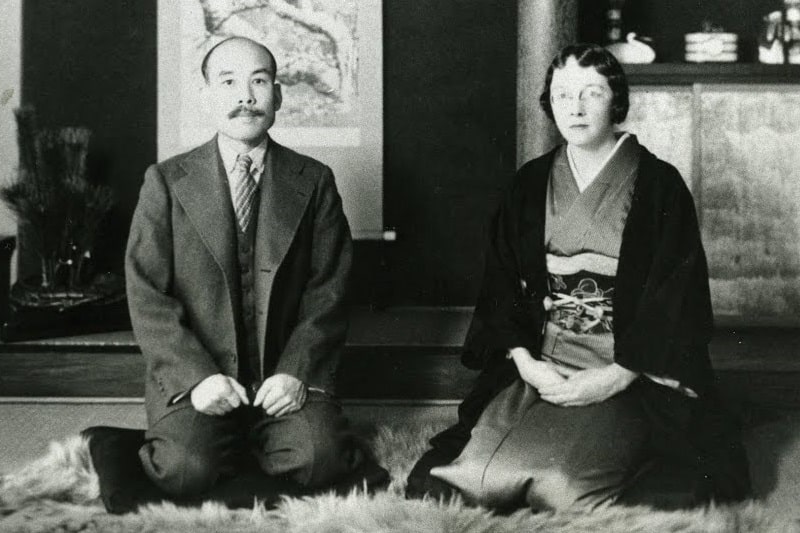 The Japanese solution for acquiring Western knowledge was to send its young scientists to study in universities across the world. One of these scientists was Masataka Taketsuru, who studied organic chemistry at the University of Glasgow.

During his studies, he had also worked at several Scottish distilleries. Taketsuru was very appreciative of Scottish whisky and wanted to learn everything he could about its production so he could recreate it on his own.

He closely studied how whisky is made and how copper stills were used for grain distillation. In 1920, after noting down every crucial step in whisky making, he and his Scottish wife moved back to Japan. Taketsuru then met Shinjiro Torii, a pharmaceutical wholesaler who was interested in making high-quality liquor.

The Vision of Shinjiro Torii 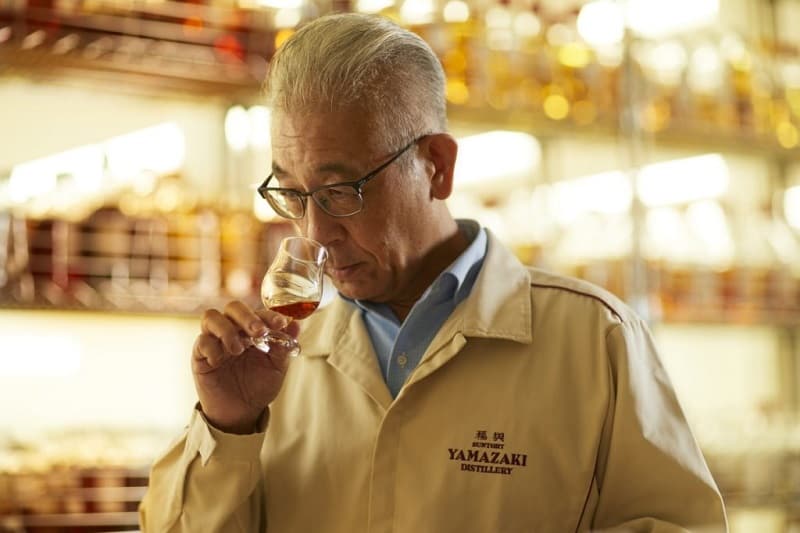 After successfully creating his own wine brand, Torii wanted to venture into the whisky-making business. Despite the demand, whisky import was still low, and the local versions were far from meeting the expectations.

Being a whisky lover himself, Torii wanted to make Japanese whisky popular. For this, he first needed to create a good quality drink and most importantly, he needed to make a genuine product that separated Japanese whisky from its Scottish counterpart.

Even if Torii managed to find someone who knew how to use all the tools needed to replicate Scottish whisky, it still wouldn’t be enough. Japanese people hold their traditions in very high esteem, only a drink suitable for their tastes could satisfy their demand. Encountering Taketsuru, who had spent time in Scotland studying the ins and outs of the whisky-making process, gave him the opportunity to do just that.

The Meeting of Two Minds 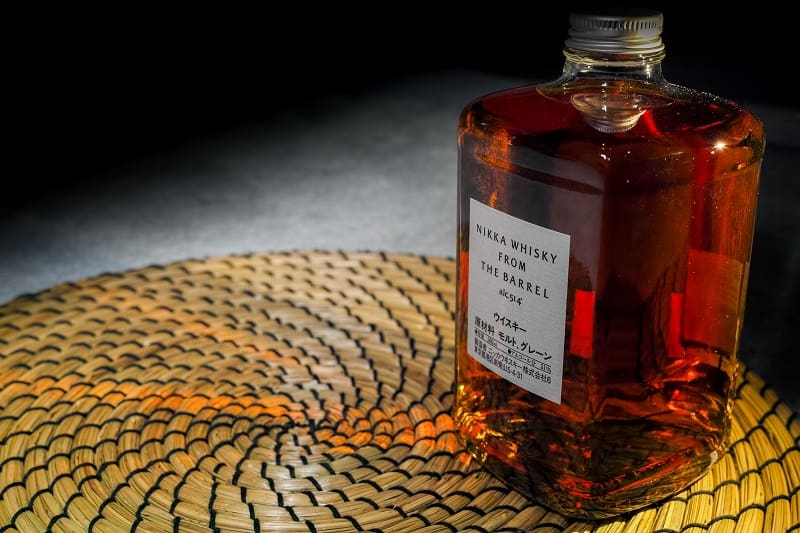 Not only did Taketsuru know which ingredients, tools, and temperatures to use, but he also shared Torii’s passion for creating authentic Japanese whisky. Seeing this, Torrri immediately hired him for work in his newly founded distillery in Yamazaki. Although the location didn’t have a coastal climate, as most distilleries had in Scotland, this town near Kyoto had the best water possible for whisky production.

Even with being empowered with all the knowledge and tools needed for making whisky, it took until 1929 for Torii and Taketsuru to create a drink they were both satisfied with. Thus, Shirofuda, the first authentic Japanese whisky, was born

It took Japanese markets by storm and it is still highly popular today. Later on, Taketsuru founded his own distillery named Nikka, while Torii also renamed his whisky to Suntory. Nikka and Suntory remain Japan’s most prominent whisky distilleries, instilling trust and gaining awards until this day.

See more about - Defining The Difference Between Whisky And Whiskey

The Emergence of Authentic Japanese Whisky 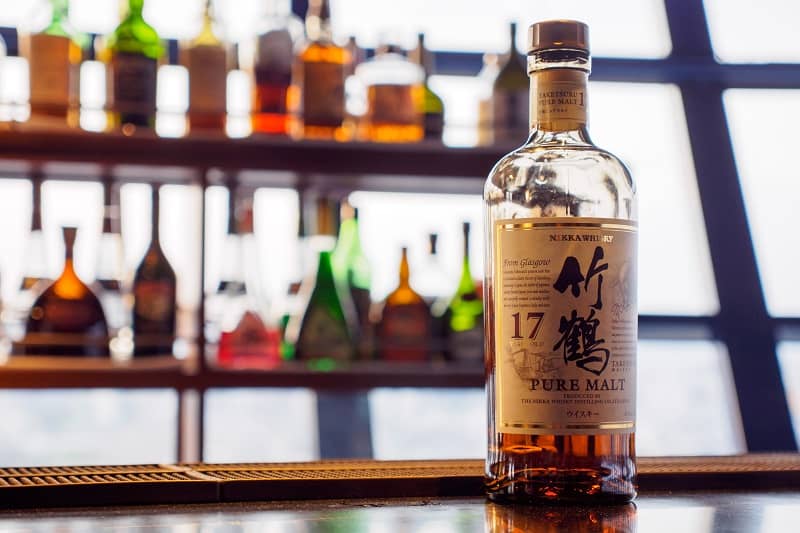 Even with the manufacturers doing their best to cater to traditional Japanese tastes, whisky was an unfamiliar drink for most people. This made its sale challenging in the beginning, at least until Japan entered World War II.

Japanese soldiers were very particularly fond of their authentic whisky, and through the duration of the war, they helped the distilleries double their profits. Shortly after the war, Japanese whisky fueled the US and the British armies, while continuing to expand the domestic market.

This helped keep up the sales even after Japan’s occupation ended. Distilleries turned to cater to locals with special whisky bars, which still exist today, and besides whisky, also often offer other fine Western drinks. By the 1970s, Japan’s economy was thriving again, which meant a huge explosion for the whisky market.

People could afford fine, authentic drinks, which meant they consumed a lot more Japanese whisky. While the import of Scottish whisky also increased, this didn’t dampen the sale of the domestic product. At one point during the 1980s, sake distilleries were transformed into whisky distilleries, because the latter was far more profitable to produce. The 1990s marked a decline in Japanese whisky sales, and this was because of changes made in the country’s taxation laws.

The taxes on the imported whisky became protected which meant that suddenly there were a lot more whisky-producing countries present on the Japanese market. At the same time, the taxes for locally produced spirits were raised.

This was only made worse by the local economic stagnation at the time. Young, working-class people opted for drinks that came with a lower price tag, so many prominent distilleries were forced to close their doors forever.

The Bumpy Road to Success 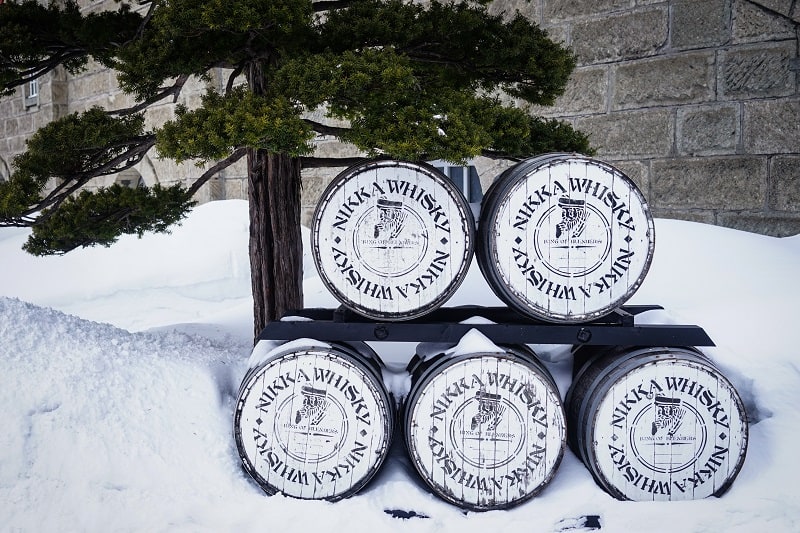 From all of their old distilleries, only nine larger ones remain open today, with some smaller manufacturers catering to their local community. The remaining distilleries operated at limited production volumes, only to maintain their high quality.

In the end, their unwillingness to compromise quality for the quantity paid off. Very soon, Japanese whisky became sought after yet again, and it started to win one award after another. It all began with the movie Lost in Translation in 2003, which featured Bill Murray, alongside Suntory whisky.

The fame launched the entire Japanese whisky scene to a whole new level, and soon the accolades started to fly in. Because of this, the demand for premium Japanese whisky was growing again. Even though the Japanese domestic market remains relatively stationary, its expansion over the global market hasn’t slowed.

Thanks to digital marketing solutions, many more overseas consumers have heard about these amazing drinks. Soon after the demand for Japanese whiskey rose again, a couple of new distilleries were founded, including Venture Whisky, Chichibu, Mars Shinshu, Eigashima, and Akkeshi.

There was one notable consequence of the fallout of the 1990s. Namely, that during the last decade or so, age statement whiskies are slowly being replaced with no-age-statement (NAS) brands. While some of the discontinued bottles are still available, they come with premium prices.

The largest producers are struggling to meet the market’s demands, but this doesn’t affect all distilleries the same way. Premium labels are naturally more sought after, especially in the developed countries of the Western world. Whereas smaller distilleries are competing to fill the remaining space at local levels.

Unfortunately, these aren’t always honest with their labeling and marketing practices, often promising to provide a lot more than they do. However, big or small, these distilleries all have a very distinctive preparation process, resulting in a unique taste revered by many. Slowly, but surely, Japanese whisky rose to the same level of fame and prominence as its Scottish counterpart, helping Japan become the third largest whisky producer in the world.

The Secret Behind Their Fame 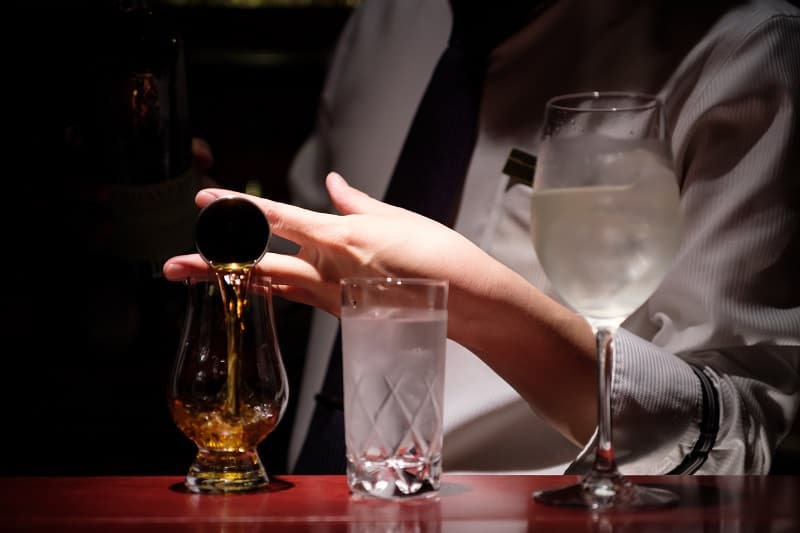 Japanese whiskies continue to win international awards and that’s due to a couple of reasons. First and foremost, it follows the traditional Scottish whisky-making procedures, including the double distillation process using pot stills.

Seeing the success recreating the Scottish way brought, the manufacturers made sure to keep up the same high standards. Yet another crucial ingredient in the success of Japanese whisky is the Japanese motto Wakon Yosai, which means Western technology, in Japanese spirit.

This refers to the Japanese ability to take any technology developed outside their country and improve it until they fit their needs and expectations. While this motto was first applied to politics, it soon took over production, trade, and several other branches.

When applied to whisky production, this meant taking the Scottish ways and supplementing them with methods to create a drink distinctively tailored to Japanese palates. These methods include new stills and casks with very distinctive shapes and innovative mixing techniques.

Fortunately for them, the authentic Japanese note suits Western tastes just as well. This is because, while they may have modernized their technology, Japanese whisky distilleries still settle only for the best ingredients. This ensures that once someone drinks their brews, they will have the best experience possible.

Japanese whisky has a mild taste and a pleasant aroma, which may differ from the Scottish brands, but it definitely matches it in quality and demand.  This distinctive flavor is accomplished by combining many different types of yeast, barley, and malt.

The largest Japanese whiskey distilleries use imported peated and non-peated barley coming from Scotland and Australia. When combined with the note only a cask made from mature Japanese oak can provide, the result can only be an excellent Japanese whiskey.

Nowadays, Japanese whiskey makers are also very careful about selecting the location for distilling. Not only does the area need to provide the highest quality water, but its weather is just as important. While the Japanese climate is warmer and less stable than the Scottish one, the Japanese have managed to turn this to their advantage.

The huge temperature difference between the summer and winter makes it possible for Japanese whisky to age at a much faster rate. This results in a fine quality whisky that has a much milder flavor than its Scottish counterpart. In the end, when all of the unique elements are combined, they mark the makings of a world-class product.

Despite its short history, Japanese whisky has come a long way from simply being a bad copy of its Western counterpart. Not even its initial cold reception or a World War could stop its steady development into what’s known today as one of the purest quality whiskies available.

The demand for Japanese whisky reaches new highs every day and not just in its homeland. The Japanese whisky market in the Western world is booming and it’s clear to see why.

It’s cool to get a Japanese whisky but the drinks themselves are exquisite. Of course, the exact flavor profile will change from one distillery to the next but if you’ve never tried a high-quality Japanese whisky before, then it’s time you put that right.