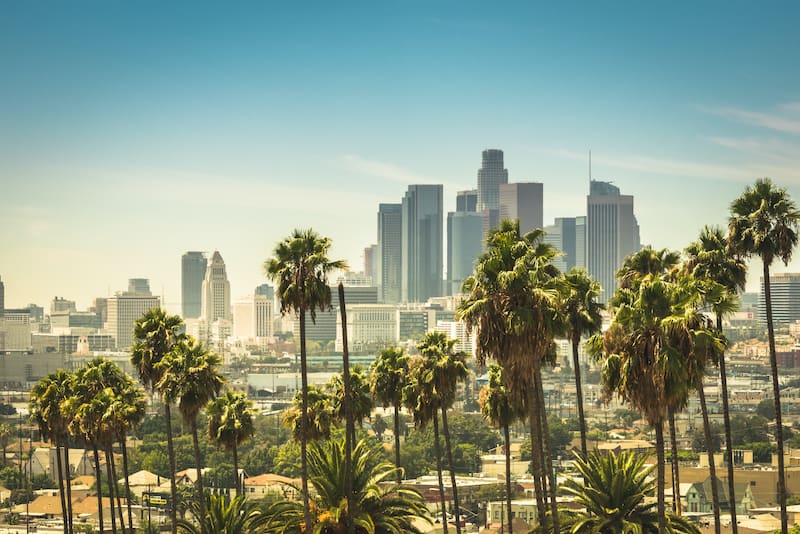 Los Angeles. The City of Angels. L.A. What is it about this Pacific-coast city that captivates not only the hearts of Americans but also citizens around the globe? It could be the glitz, the glam, or the star appeal. Then again, it could be a rich history, beautiful weather, or the chance to catch a glimpse of a few celebrities out in the wild, TMZ style.

An Olympic city in 1932, 1984, and soon to be again in 2028, Los Angeles was originally inhabited by the Tongva and Chumash tribes until the Spanish arrival in 1542. As the third-largest city in North America, after New York City and Mexico City, L.A. stands proud in Southern California, bridging mountains and deserts over a unique landscape covering just under 470 square miles.

Now, it’s a city that’s on the map as the only place one can truly become a star. With so much going on, it’s no wonder that Los Angeles has become an international leader in the luxury hotel game. When scoping things out in L.A., it’s important to crash in style, especially if you want to make it big (or at least feel like it during your stay). Without further ado, here are the top luxury hotels in Los Angeles.

1. Keep It Classy at the Four Seasons in Beverly Wilshire 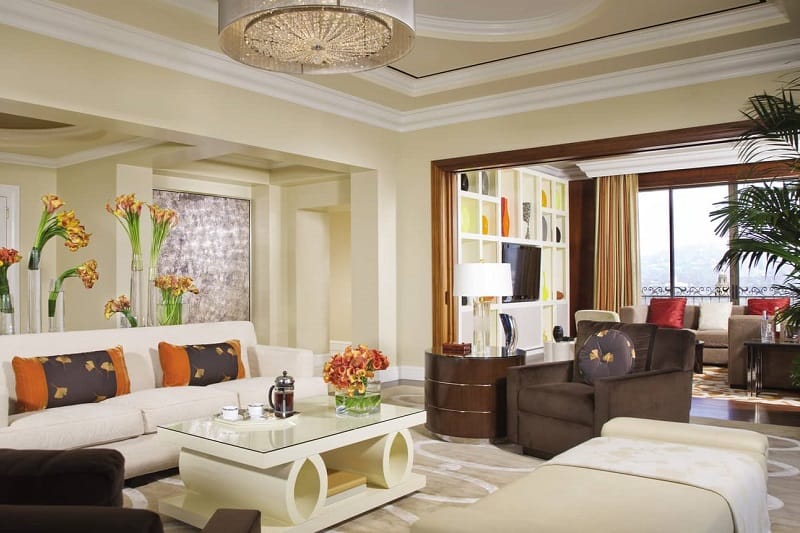 $35 million dollars worth of renovations makes this Four Seasons a swinging spot the same way it had been when Warren Beatty stayed at the Beverly Wilshire location years ago. Now the amenities include Wolfgang Puck’s Steakhouse, CUT, as well as a chic and swanky cocktail lounge. The historic abodes attract locals, tourists, and celebrities alike.

The demand for a stylish room is high, and this Four Seasons location does not disappoint. The rooms are up-to-date with rich wood motifs and splashes of green. Outside, visitors will enjoy shopping trips on Rodeo Drive. Yes, near Chanel and Prada!

Many come for the allure, but they stay for the lovely pool. Because the hotel has marked its place in L.A. history, the Old Hollywood vibe is alive and well in Beverly Hills on Wilshire Boulevard.

It’s about midway between downtown L.A. and the famous Pacific beaches that make California the hotspot destination it is today. Despite all the action, the hotel offers a 5-star spa so guests can unwind with ease.

The hotel’s exterior was captured on camera years ago in Pretty Woman. In fact, the hotel offers a Specialty Suite for those who are planning a trip in the spirit of the film. The property offers a behind-the-scenes visit to Rodeo Drive, complete with a wardrobe consultant and stylist.

2. Revel in Style at the Modern W Hollywood 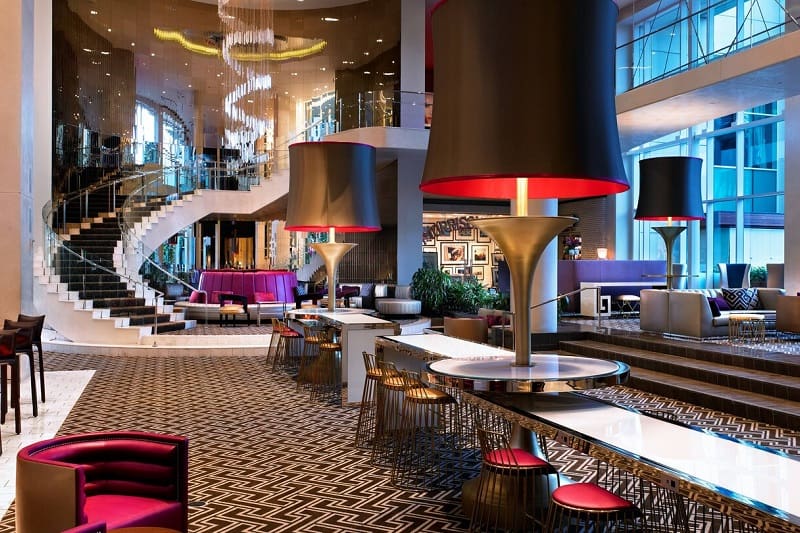 If the classic appeal of L.A. is calling you, but you’re looking for a modern twist, the W Hollywood is right for you. The contemporary design sits on Hollywood Boulevard and Vine, putting guests in the center of the action. From there, the Hollywood Walk of Fame, the Pantages Theatre, and the Capitol Records Building are all within reach.

West Hollywood is a hit in the social scene. There are plenty of options for dining, including two on-site options: Station Hollywood and Delphine Eatery. Swimmers and those who like to bronze will enjoy the WET Deck, a rooftop pool where a daytime dip is sure to please. Stay until sunset to snap a shot of L.A.’s city lights at night.

Big spenders can upgrade to the E-WOW Suite, a space that’s over 1,290 square feet and wrapped in floor-to-ceiling windows. Those staying in L.A. hoping to make it in the music scene can take advantage of the W Hollywood’s Sound Suite, a studio that offers privacy for recording music and other creative endeavors.

3. Stay on the Outskirts at the Lido House Hotel in Newport Beach 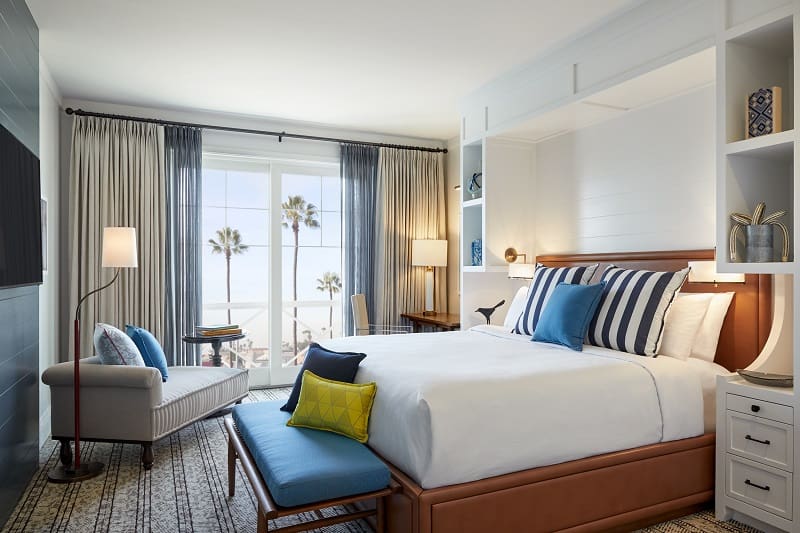 Newport Beach isn’t exactly Los Angeles, but it’s close enough, especially if a beachside retreat is what the visitor has in mind. That’s what Lido House Hotel has to offer in its sophisticated-yet-bohemian offerings.

Lido House Hotel’s guests come looking for a beach-house style stay. In Newport Beach, the lodgings offer that to both locals and visitors.

A Cape Cod motif runs throughout the property, and it truly feels like the crown jewel of Newport Beach as it sits on the former City Hall location. In other words, it is the perfect place to catch a few rays while avoiding L.A.’s hustle and bustle.

The pool is the centerpiece of the property. Surrounded by creamy cabanas, tantalizing saltwater swimming awaits guests aspiring to beat the heat. Lawn games and poolside champagne options round out the afternoon.

The hotel is a fit for visitors who find themselves in town for major events. For instance, the Newport Beach Film Festival, the Balboa Car Show, and the Newport Beach Wine & Food Festival are popular attractions. The property also houses Boost Spa, making available restorative treatments like massages, facials, body wraps, waxing, and aromatherapy.

4. Enjoy the Greenery at the Sprawling Hotel Bel-Air 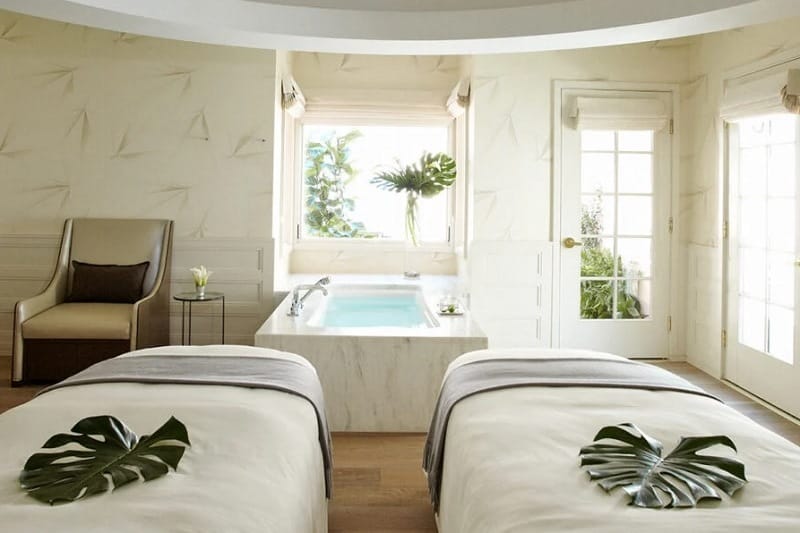 The Hotel Bel-air in Los Angeles provides a natural landscape for those hoping to get out and enjoy a fresh breeze. In a canyon hillside, the hotel is a Hollywood-centric oasis. A contemporary design dripping in marble, limestone, and wood, this hotel has all the trimmings of luxury and relaxation.

This Forbes Travel Guide-approved hotel is a 5-star option on 12 green acres in the neighborhood known as Bel-Air Estates. Guests who have stayed in one of the 58 rooms or 45 suites have described their views as tropical.

Another Wolfgang Puck menu offers supreme dining choices on plates that bring together California and European flavors. Guests are encouraged to take advantage of the spa as well. Seven treatment rooms, including a mosaic steam room, will help guests cut back on stress.

The hotel boasts some history, too. After opening in 1946, Grace Kelly, Elizabeth Taylor, and Marilyn Monroe hung their hats here at the end of the day. Rolling through the large oak trees and manicured shrubbery on the way to the door, one will recognize Swan Lake.

Guests come for privacy. Parking is valet-only as there’s little street parking in the area. L.A.’s main attractions are only a car ride away.

5. Try the JW Marriott Los Angeles on for Size 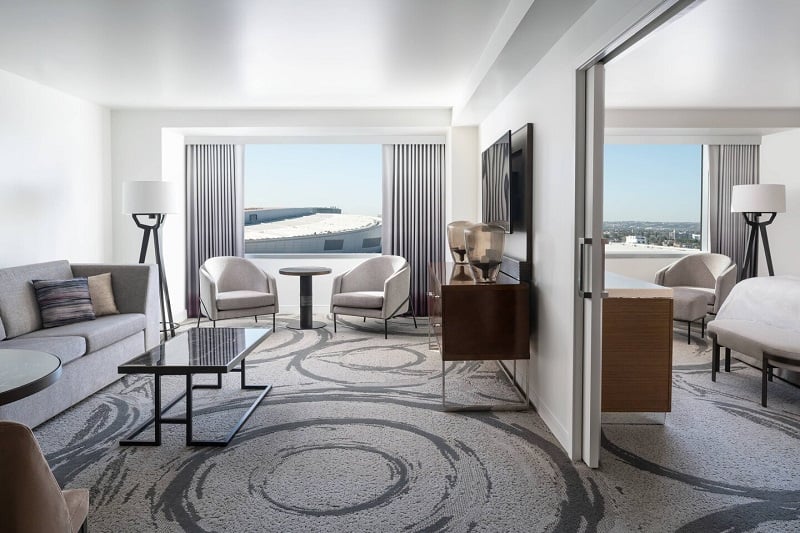 In fact, in downtown L.A., a property like this had been lacking for over two decades. In 2010, the need for a luxury property in the area was answered with the opening of the 878-room hotel.

In the middle of all L.A. has to offer, the hotel provides beds to guests who are in the city for games, shopping, dining, and business. Sometimes a little celebrity magic works its way into the mix.

People may land here and realize they’ve seen it before on television. It’s been the backdrop for the Primetime Emmy Awards, the Grammy Awards, and the arrivals portion of the VMA awards.

The property’s strength is its size. Every last inch of the 100,000 square feet property shines with state-of-the-art design and technology, offering venues for those planning ballroom events, boardroom meetings, or iconic Hollywood parties.

This is the property that puts everyday amenities at the lodger’s fingertips. Don’t overlook the value of having a car rental center, business center, and dry cleaning services on site.

6. Keep It Cool With a Stay at the InterContinental Century City 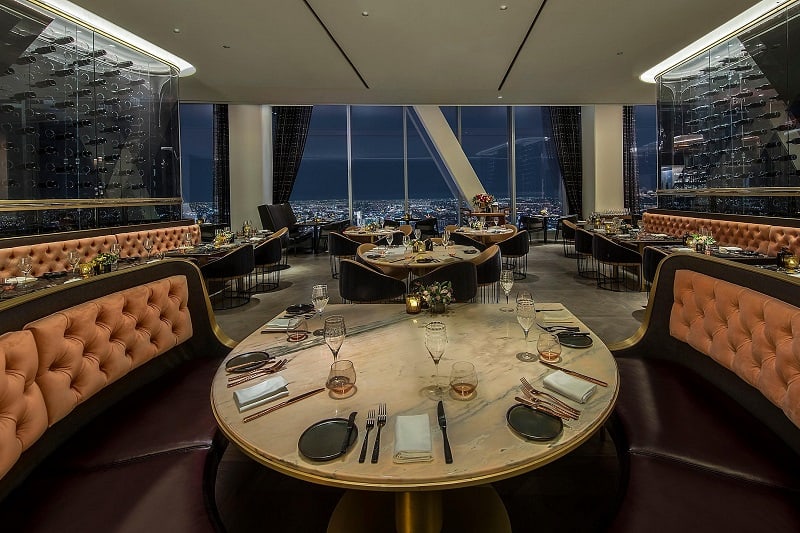 In Los Angeles, the InterContinental Los Angeles Century City at Beverly Hills is a place where agents, producers, and executives may be hiding. Close to many agencies, Fox Studios, and downtown Beverly Hills, it’s the place to overhear someone say, “Let’s do lunch!”

There are 363 rooms on the property which was recently renovated in a multi-million-dollar project. Neutral tones and rich woodwork tie the property together in a way that says simple, sleek, and elegant.

Another hotel that fits the bill for large venue options, there’s plenty of rental space to go around. The ballroom, the largest space, offers room for 400 people. The garden courtyard offers a sunny outdoor option.

Because the building has a unique layout, the rooms do not follow the typical cookie-cutter approach. Instead, many feature one-of-a-kind accommodations. Those in the know advise guests to mention special interests while checking in. Inquire about balcony size or living room choices.

Another feature of the hotel is the Copper Lounge, a bar that offers whiskey lovers more than 45 choices. Sample a whiskey flight or the Angel’s Envy Distillery blend, a brand tied to the hotel.

7. Receive a Warm Welcome at the Waldorf Astoria Beverly Hills 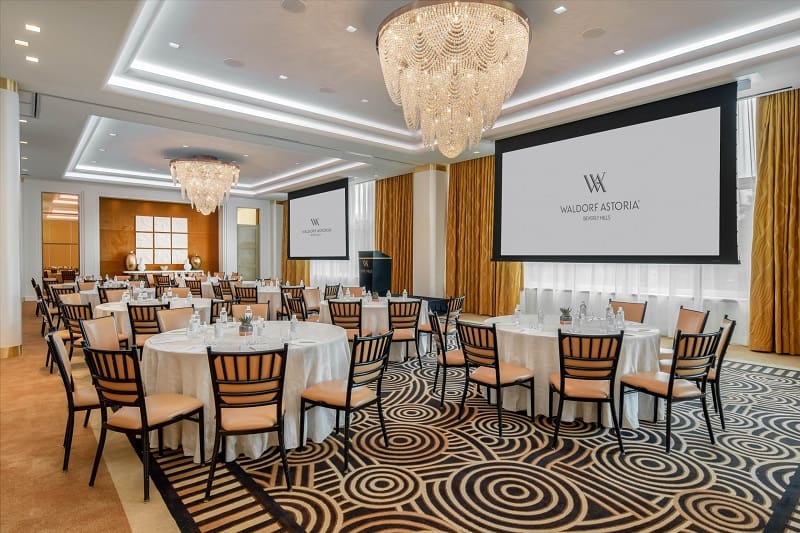 Hollywood’s golden era is all but forgotten in this art deco-inspired property. With renovations running a tab of more than $200 million, no expense was spared. The crystal chandeliers and gold accents underscore the glitz and glam for which Hollywood has always been known.

The 12 story building towers over the flashiest parts of Los Angeles offering once-in-a-lifetime views of the city. The Golden Globes have been hosted nearby, and Rodeo Drive is only a 10-minute walk from the hotel.

The focus on the guest is what sets this establishment apart from the rest. Upon check-in, all visitors are linked to their very own personal concierge. Whether they need dinner reservations or tickets to an event, the hotel’s staff is willing to go the extra mile.

With the personal concierge doing the heavy lifting so to speak, the guest avoids an awkward check-in process. Instead, everything is handled by the assigned concierge. And of course, parking is valet. 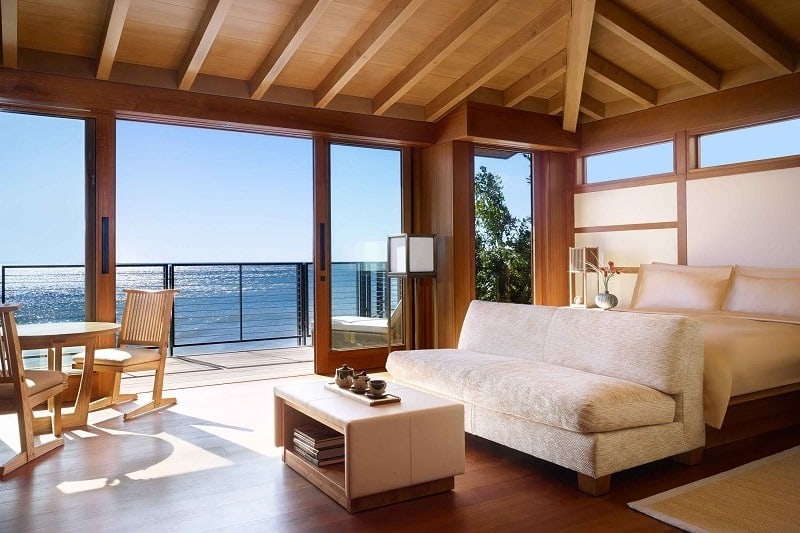 Nobu finds its name at the top of many traveler’s LA bucket lists (and with good reason). Nobu hotels and restaurants are the creation of chef Nobu Matsuhisa. Usually, celebrity sightings are the regular play du jour, and reservations are hard to get. At this Japanese-inspired property, however, the script is flipped. Guests find refuge, not paparazzi.

Privacy is key, and thanks to the small run of only 16 rooms, guests have no need to worry about the crowds tracking them down. The only thing to concentrate on is enjoying the hotel’s seaside backdrop on Carbon Beach (also known as Billionaire’s Beach) in Malibu.

Across the globe, this hotel has gained attention since being set up by Matsuhisa and actor Robert De Niro. It seems like everybody’s trying to get on the list for a stay.

The hotel is designed in such a way that mixing and mingling are downplayed, intentionally designed to appeal to those who need some R&R in the form of peace and tranquility. The hotel lobby and parking lot are guest-only, so no party crashers allowed!

Service is on the up and up at Nobu Ryokan. The staff outnumbers guests three to one, so every desire (within reason) is granted. Even Japanese bathing rituals are available, ending with the guest’s choice of robe: a Loro Piana cashmere or a linen yukata kimono.

Nestled into an oceanside setting, the sundeck, stone walkways, and Zen fountain bring on the calm in a way that could only happen in California.

With gems like these across the land, L.A. is living up to its reputation as a place for a star-studded getaway of your own design. That’s Hollywood, baby!