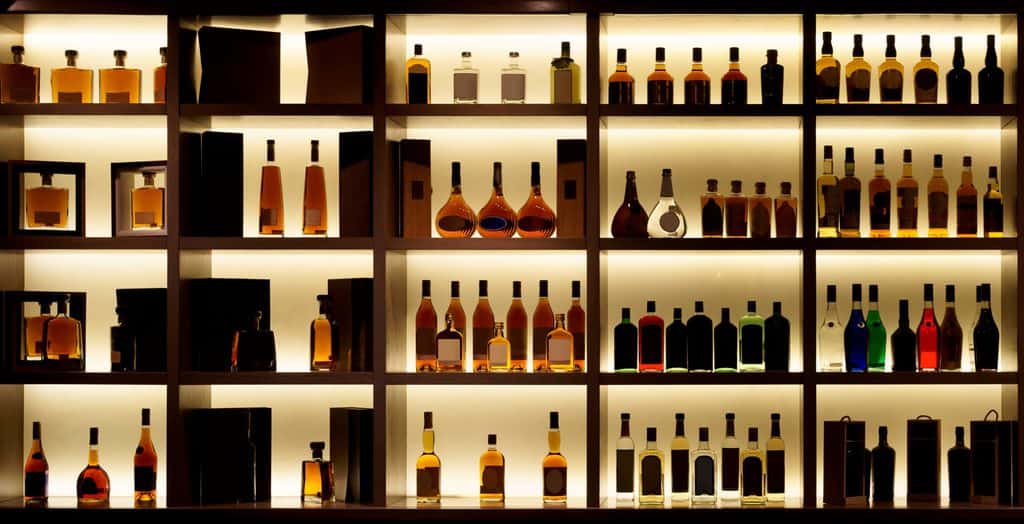 The most expensive whiskies cost a fortune no matter how you prefer to drink, collect, purchase or pronounce it. The hefty prices for the world’s best liquid will continue to grow as the rate of production drops and competition for rare bottles climbs.

The following list of 21 most expensive whiskies you can buy online has been broken down into groups, otherwise it would be populated only by single malt Japanese and Scotch whisky expressions.

Here you’ll find a much wider variation in style and price – the Single Malts from the Yamazaki and Macallan will make your eyes water – but you’ll receive the full picture of worldwide retail whisk(e)y pricing amongst the major styles. There are certainly more expensive Scotch whiskies (think the bling bottle of Isabella’s Islay), collections, and single barrels out there, but they are mostly curiosities, private sales, full collections, or auction pieces.

I’ve focused the list on whiskies you can begin buying immediately (there are always checks and balances for purchases of this type) if you have the finances and the will. As always, drink responsibly. And make sure you do your due diligence on both bottle and website authenticity prior to purchase! 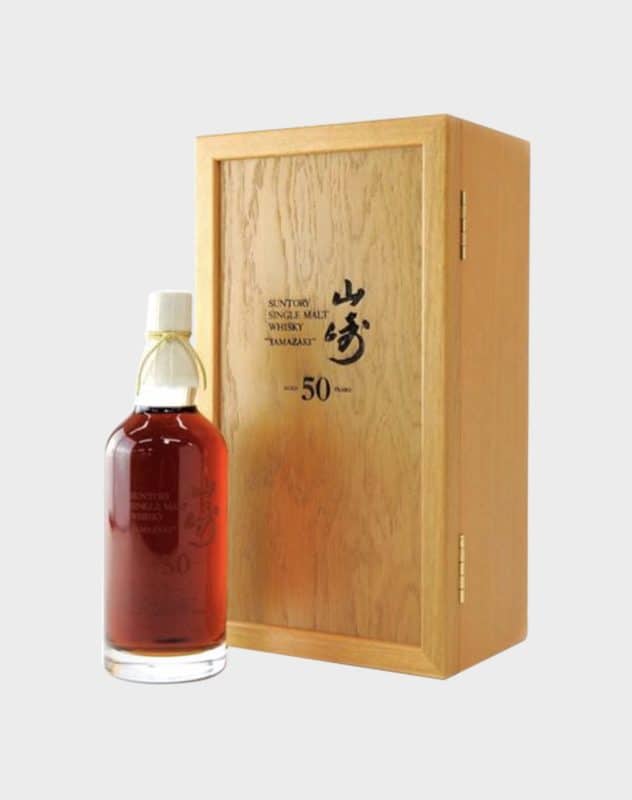 Only 50 bottles were produced for the first edition, including the two record-smashing bottles, making it one of the scarcest Japanese whiskies, and therefore the priciest. If you are looking for a younger, and cheaper Yamazaki, there is a 35 year old edition valued at a touch over $120,000USD. 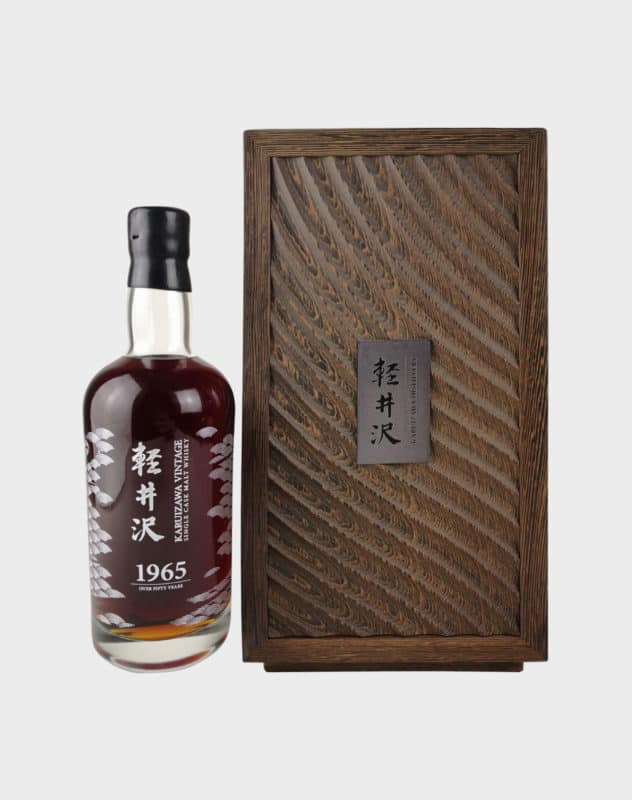 Bottled in 2017, after aging in a sherry cask for more than 52 years, this Cask strength expression was bottled in 2017. As one of Karuizawa’s last remaining casks, there were just 150 bottles were release. It’s a lock this rare Japanese whisky will go up in price from here.

The card series single malt from iconic lost Japanese distillery Hanyu is a huge drawcard on the whisky market. Each bottle in Ichiro’s set represents a playing card in a deck of cards and was sourced from a single cask dating from 1985 to 2014. 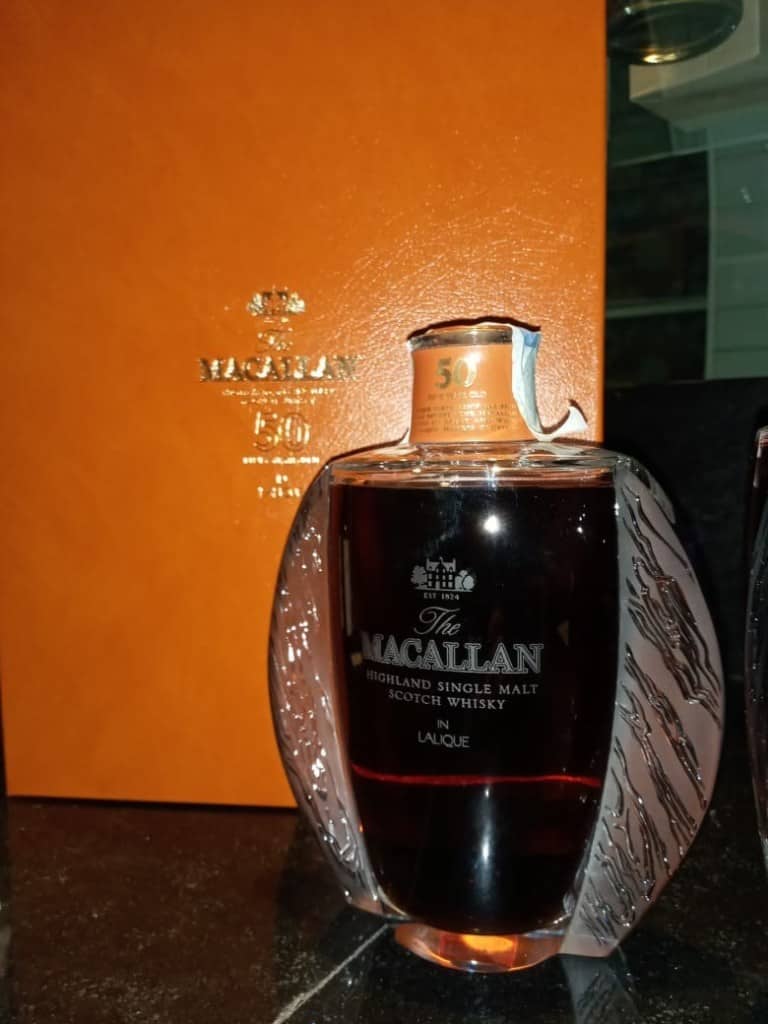 Okay, so I cheated a bit here. There are four single malt expressions from the Macallan in Lalique Crystal decanter (the most luxurious French crystal money can buy) ranging in price from 88,800 USD – $155,000 USD.

These extremely rare Macallan offerings represent the finest in aged single malts. The item pictured above is a Macallan 50 year old in Lalique, which comes in an amazing gift box and with all the paperwork needed to prove its legitimacy.

5. The Next Tier of Macallan 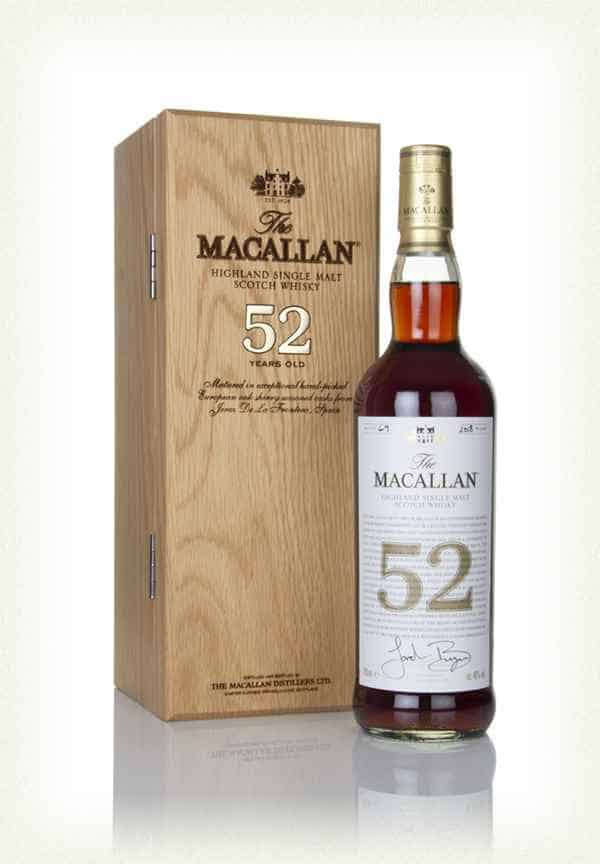 Keeping a barrel of your single malt scotch handy for half a century seems to be good business, especially if you’re one of the world’s favored Speyside distilleries. Each expensive bottle lacks the Macallan Lalique Crystal decanter finish, however the aged liquid inside is some of the best single malt whiskey a collector can get hold of.

There are around 10-20 bottles of these ‘second tier’ (giggles) Macallan fine whiskies available, including some interesting sets released as part of the Macallan Distillery Golden Age of Travel. The pictured bottle is The Macallan 52 Year Old (2018 Release), one of only 250 bottles made. 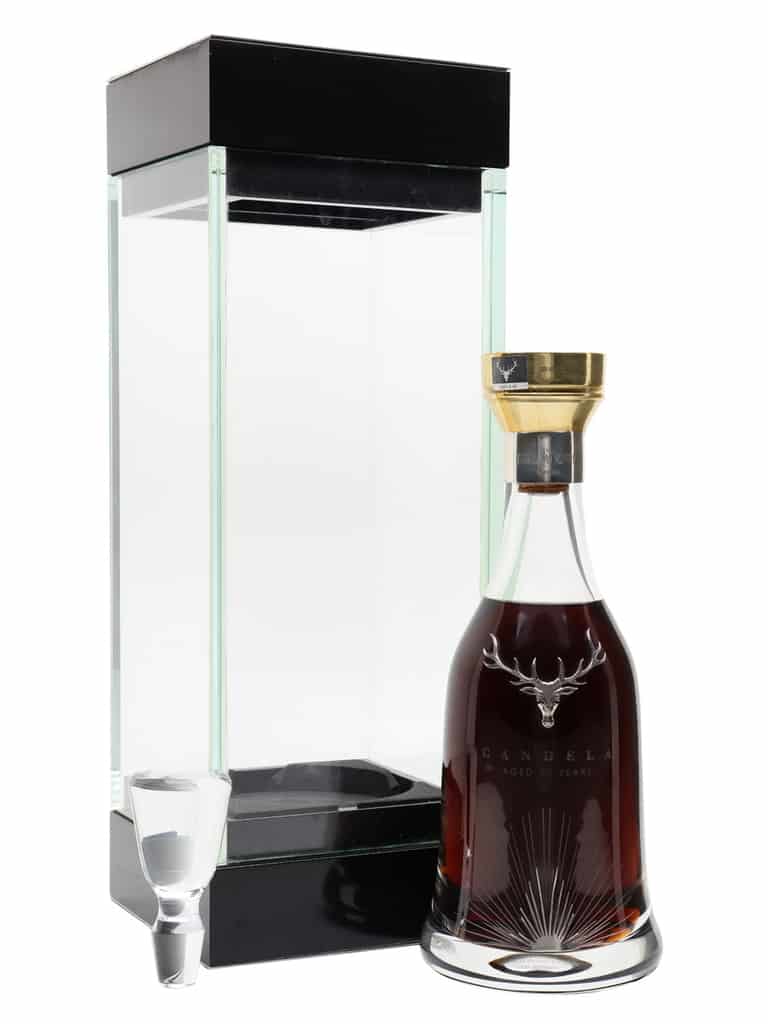 “Candela is the international unit for the measurement of the intensity of light. It defines brilliance,” say Dalmore’s official notes about this brilliant special bottle of single malt whisky.

The tasting notes from Master Blender Richard Paterson gush about this rare whisky from the Highlands, with a mixture of citrus fruits and sweeter dried fruit offerings mingling together for an incomparably sublime dram. Dalmore has a slightly cheaper 50 year old offering (just$102,124.18) that comes in a bit lighter on the wallet… 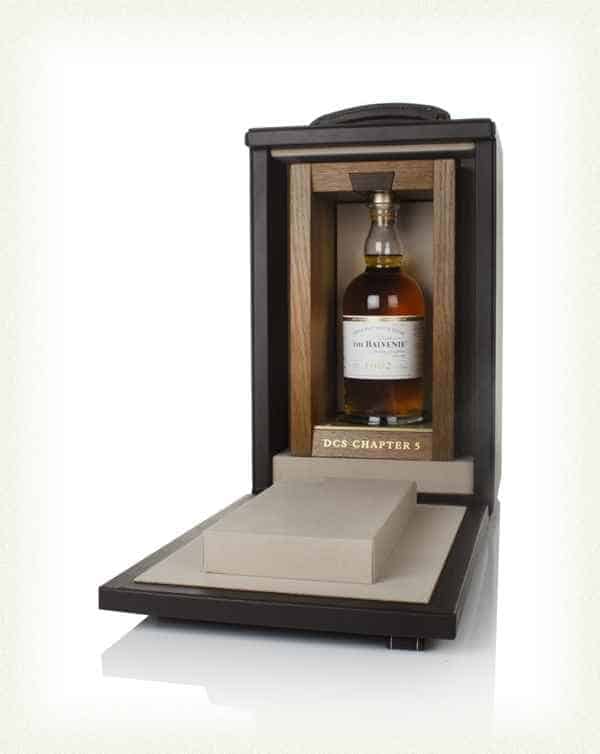 This Balvenie, another popular Speyside single malt, was released in tribute to the company’s Malt Master, David C. Stewart, and was distilled in the same year Stewart started working for Balvenie. It was casked in a Spanish oak Oloroso sherry hogshead which was filled on June 29th, 1962.

When the DCS Compendium Chapter 5 was released, Stewart told Elite Traveler: “I’ve been lucky enough to have been given the freedom to make stock decisions based on my preference and vision, with the free rein to pick casks and hold on to whisky, not always knowing what I’m going to do with it, for no other reason than thinking one day it will be extraordinary. For me, this is indulgence in its truest form.” 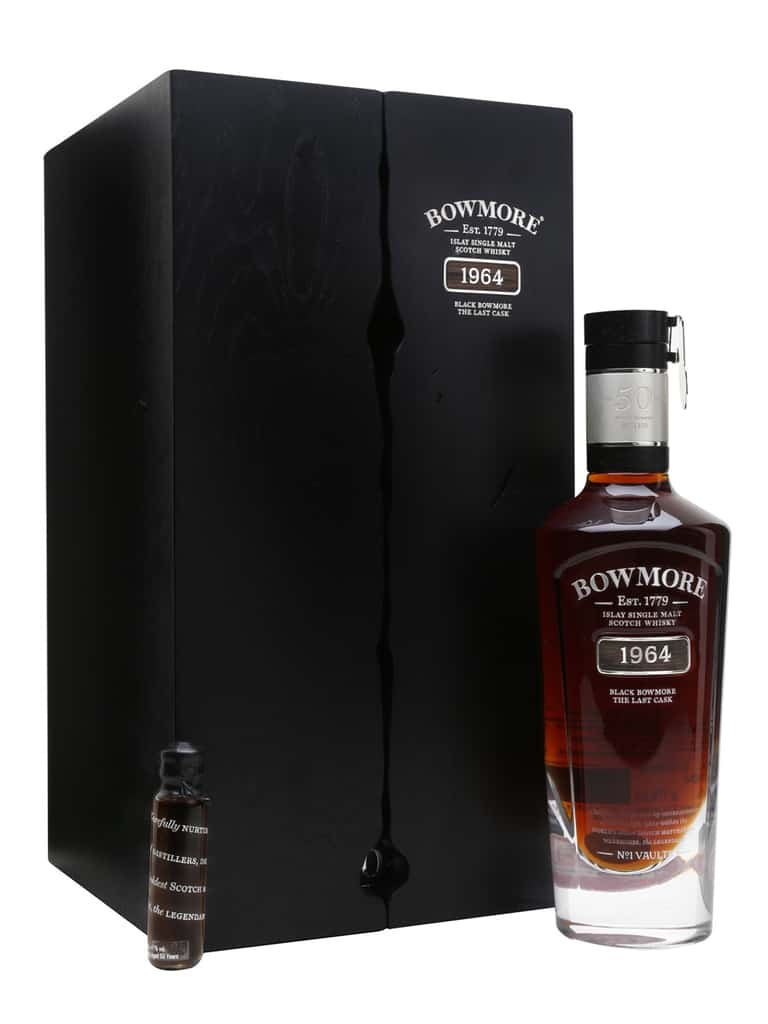 Bowmore Distillery also has a few fantastic Islay single malt expressions available in the expensive bottle top tier. Most were distilled in the 1960’s, with the highlight being the Black Bowmore 1964 Fifty Year Old- The Last Cask.

The taste of the Black Bowmore is described as, “The sublime silky taste of mango, passion fruit and acacia honey interwoven with the power of fine velvet chocolate espresso.” Next year, Sotheby’s Hong Kong will partner with Bowmore to offer the rare opportunity to acquire the complete Islay Black Bowmore single malt whisky collection direct from the Bowmore distillery. 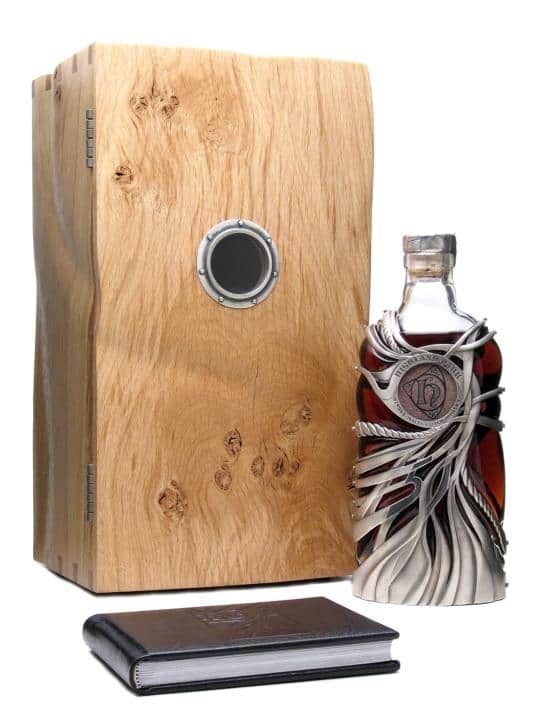 Only 275 bottles were produced from a vatting of five casks that were filled in 1960. It’s described as a rich and spicy dram, with remnants of smoke on the finish.

This expression is a standout expensive whisky, both for the liquid inside and for the elemental packaging, which includes a bottle encased in a metallic net complete with a replica of the Rose Window from the Orkney’s St Magnus Cathedral.

As you drink the whisky, the window is slowly revealed. 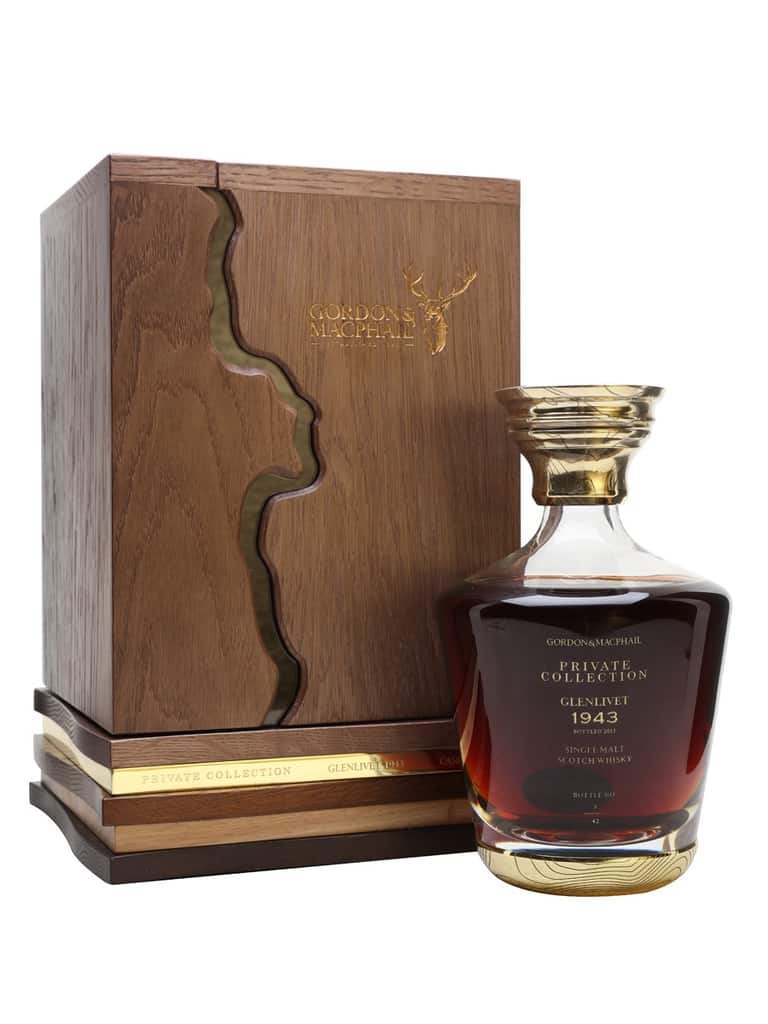 Each rare bottle in the collection is one of just 40 gold-engraved decanters and is showcased in a hand-crafted wooden box that comes with a book and certificate of authenticity. 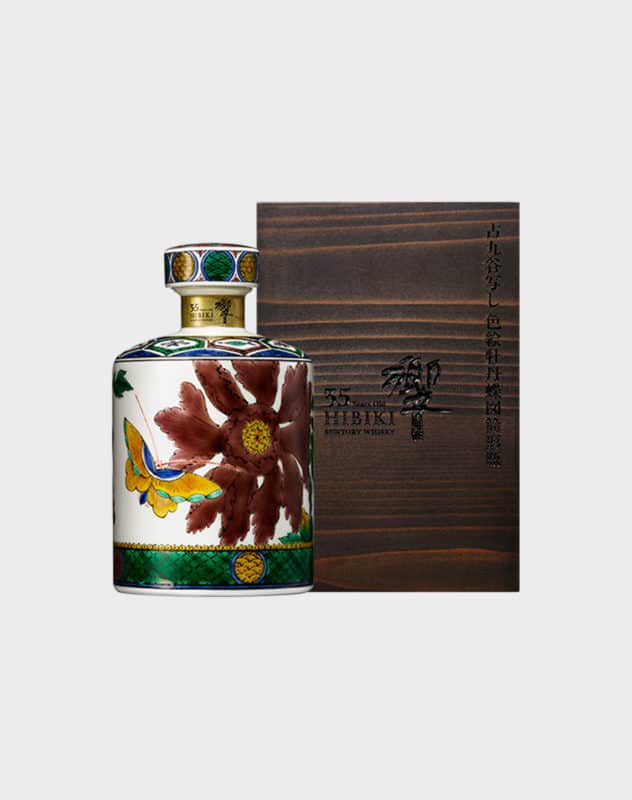 The Hibiki 35 year old version hasn’t been bottled for several years, and due to the shortage of old and very old Japanese whiskies everybody feared to ever see this premium rare whisky again. Bottled unchillfiltered at 47% ABV, Hibiki 35 year old contains single malts and grain whiskies aged in different types of barrels such as Sherry, Bourbon and Mizunara casks.

To honor and mark the 400th anniversary of the appearance of porcelain in Japan, Suntory and Japanese craftsmen created a traditional design incorporating the typical shape of Hibiki blend bottles combining colorful drawings of peony flowers and butterflies. 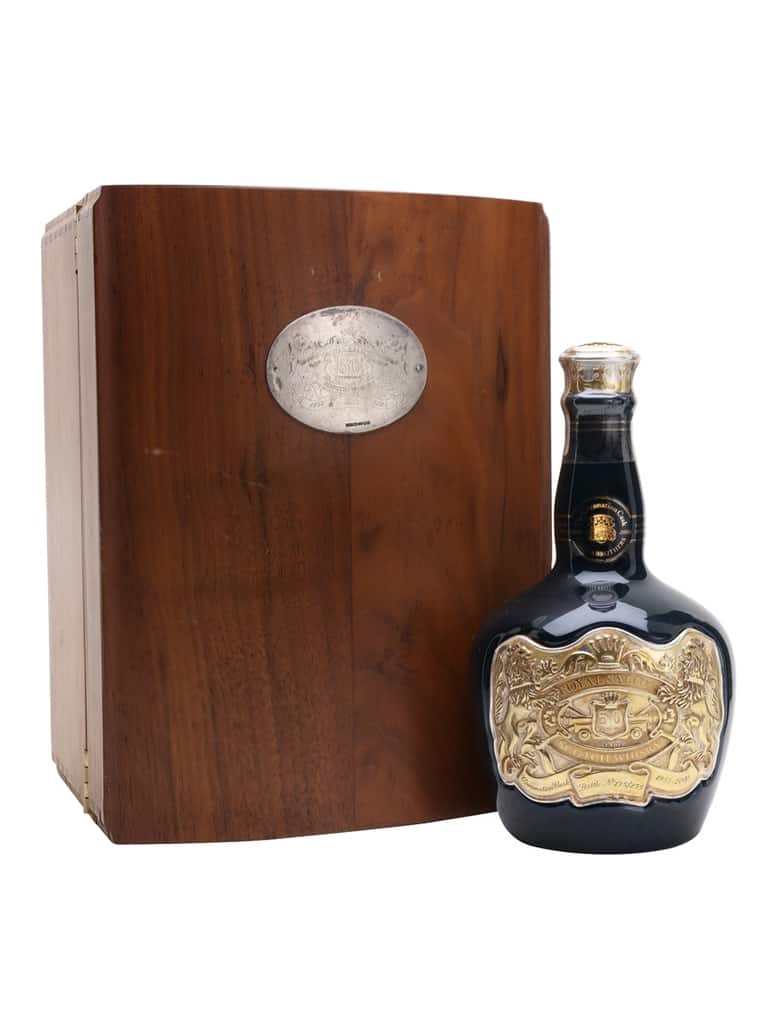 The luxury market for blended expensive scotch whiskies is dominated by Royal Salute, with some of their whiskies having been bottled before the start of World War II. The coolest thing about them are the aged decanters and packaging that showcase just how old these whiskies are.

The highest priced blended Scotch whisky available with just a click is the Royal Salute 50 Year Old Coronation Cask expression at early $40,000USD. There were only 255 bottles created of this expensive rare blend Scotch whisky. 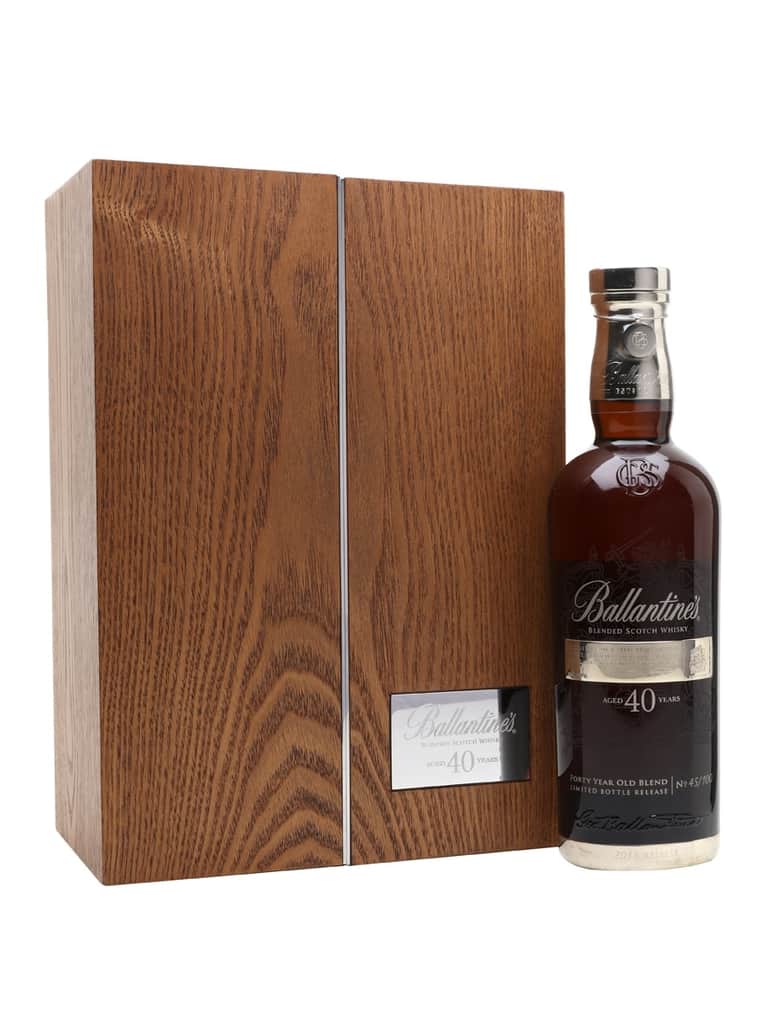 Only 100 bottles per year of this exquisite blend are released, and each one is hand numbered. The nose is redolent of ripe pears in syrup and rich fruitcake, with A hint of cinnamon and root ginger. On the tongue the blend offers multi-layered flavors, including rich toffee and sweet soft red apple before a delightfully long finish that. 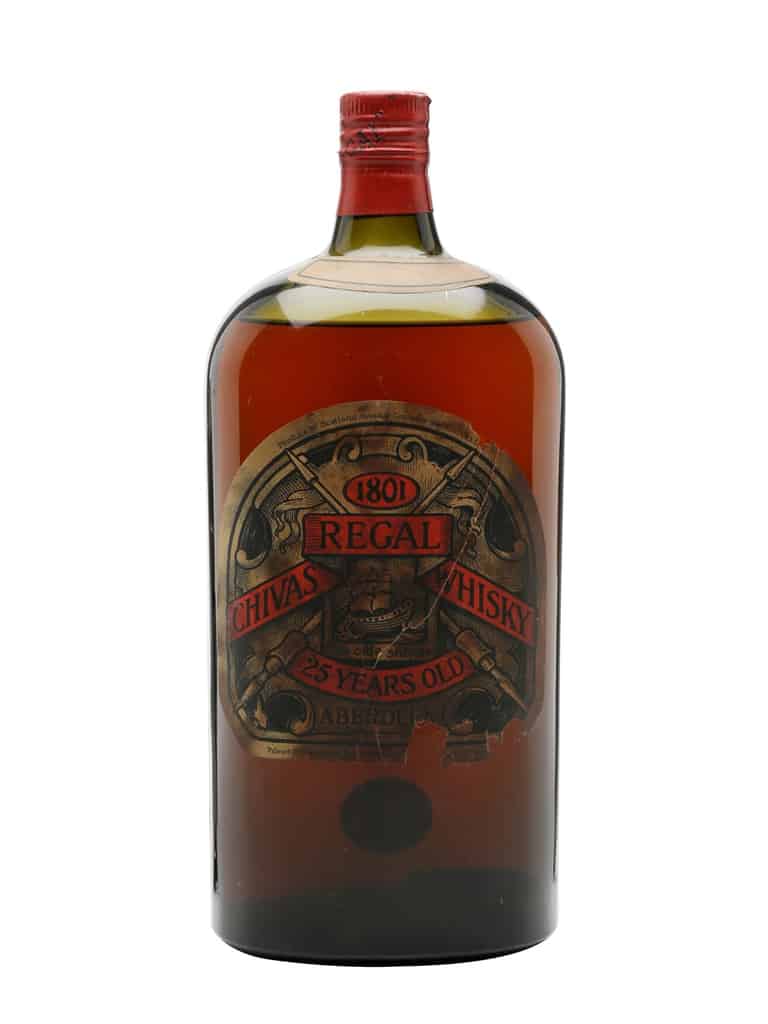 This old timer was bottled in the 1930’s during the reign of King George V. The very old original bottle was aged 25 years before being bottled in 1.13-litre size old school bottles favored in the UK and Europe pre-World War II at the time. This is a rare bottle you buy and just can’t bring yourself to drink. 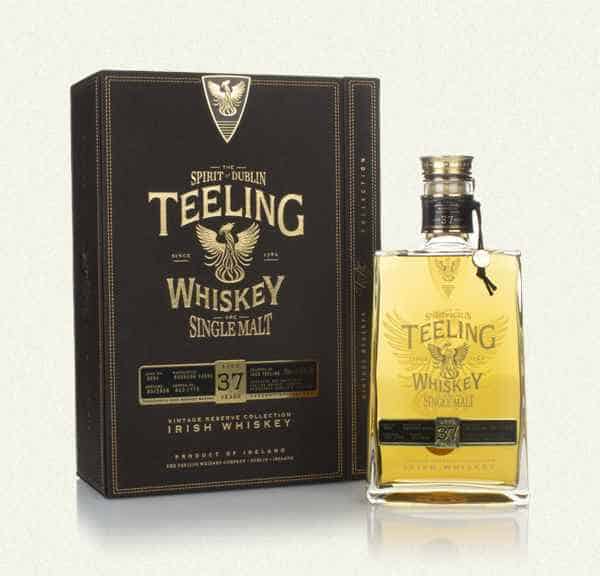 Teeling 37 Year Old is an expensive Irish whiskey from the Vintage Reserve Collection. It was matured in ex-bourbon casks, with a small outturn of just 175 bottles. 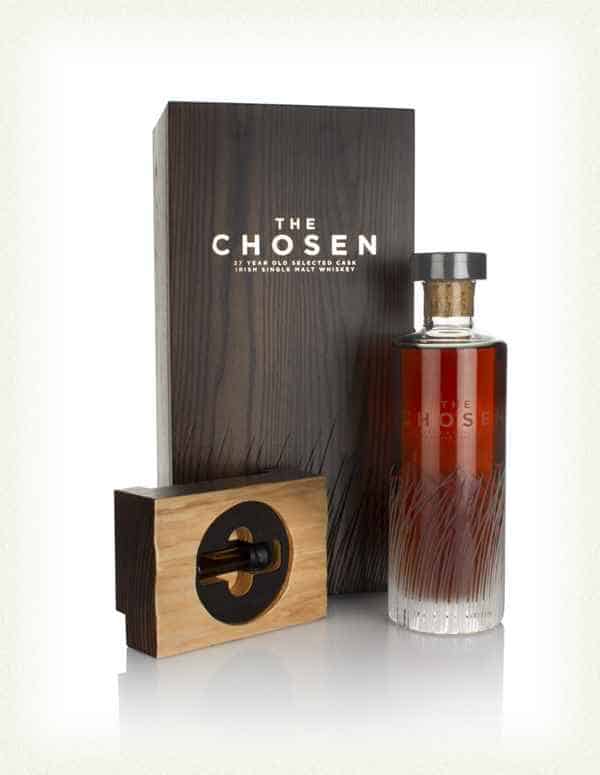 Distilled in 1991 and left for 27 years, this Irish single malt whiskey was then bottled at a cask strength of 52% ABV and called The Chosen (I’m always here for a great name). The Chosen whiskey bottle comes in a hand-blown, hand-cut crystal decanter accompanied by an ash presentation box.

There’s also a separate cheeky sample of the dram in the wooden pedestal to save you from opening the bottle. 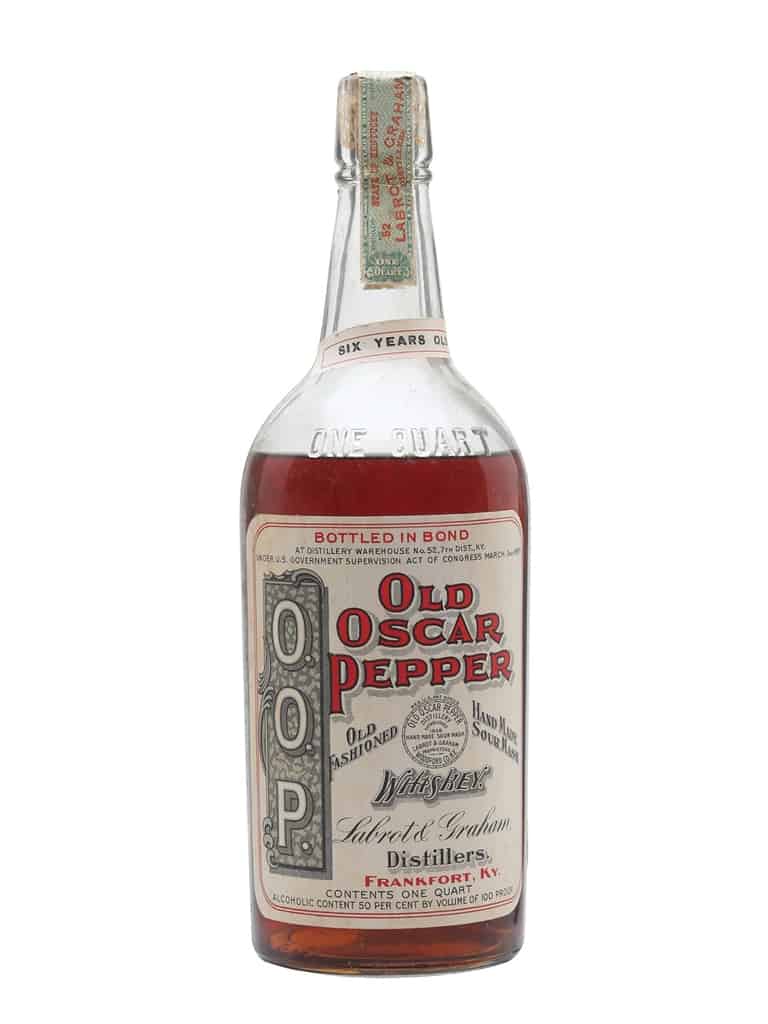 This is American Whiskey History in a bottle.

Oscar Pepper 100 proof bottled in Bond was distilled at the original Old Oscar Pepper Distillery in 1911 and bottled just a year before it closed in 1917. The Distillery was rebuilt in 1935 and bought in 1940 by Brown-Forman, where it now produces Woodford Reserve Whiskey.

According to the US. Library of Congress the Distillery site retains much of the historic integrity of the distillery’s architecture from both the pre- and post-Prohibition eras of the industry, as well as maintaining its rural location in Versailles, Kentucky. You would be hard pressed to find an expensive whiskey as interesting as this. 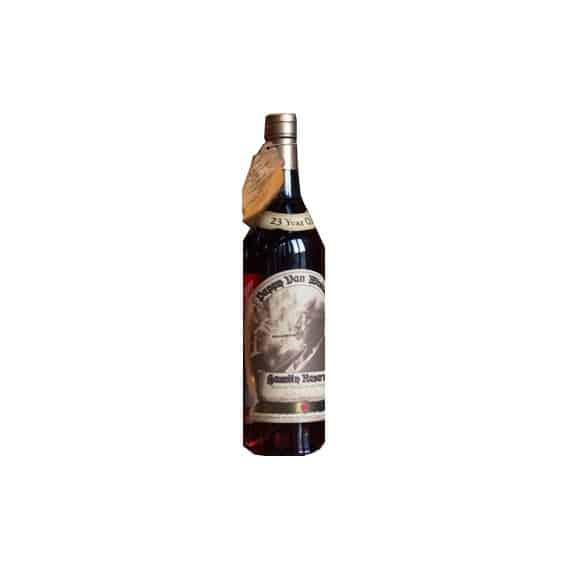 The scarcity of Pappy Van Winkle and its visibility as THE American Whiskey bottle of status ensures it’s a bourbon enthusiasts collectors’ edition of the finest quality, and worthy of an elevated price tag. Pappy van Winkle also has a slightly cheaper, but equally highly regarded (some say it tastes better) and rare 20 year old version as well. 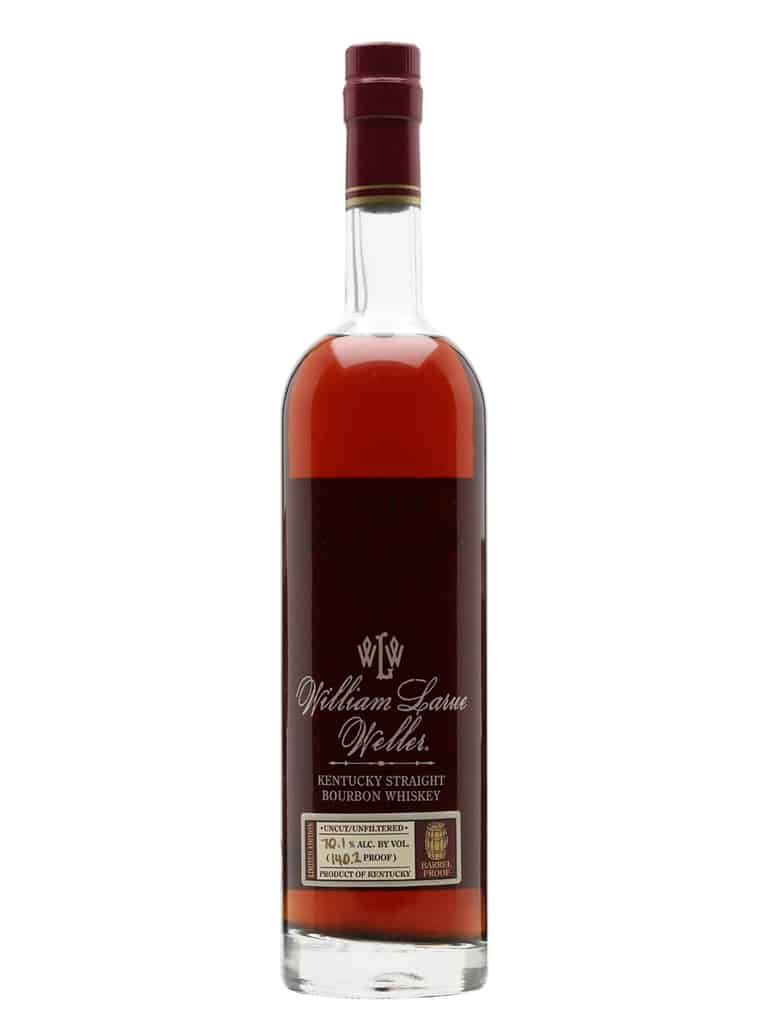 William Larue Weller is the Antique Collection’s uncut, unfiltered, wheated bourbon bottled at 140 proof (70.1% ABV) and bottled at Buffalo Trace Distillery. It scored 97 points in Jim Murray’s Whisky Bible, who noted that the Weller was “Just one of those whiskeys that makes sense of life…” 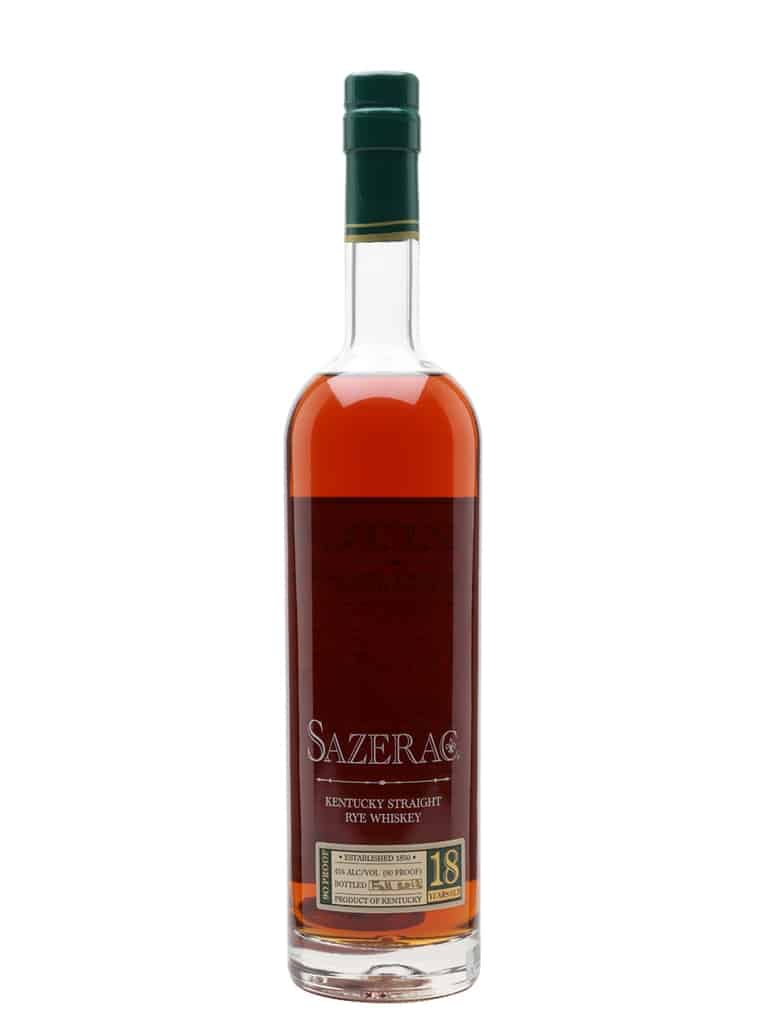 Very mature with the 18 year age profile, this Sazerac offers notes of oak, leather, molasses and all-spice. The long drops in lingering rye spice augmented by traces of cinnamon, vanilla, and pepper. 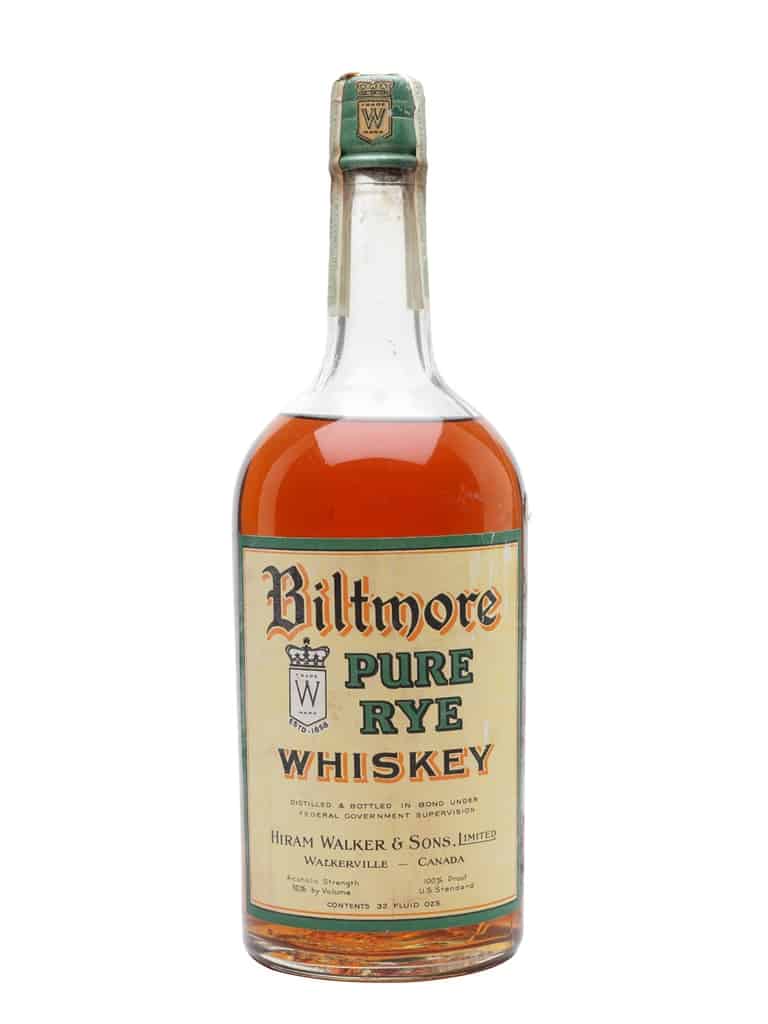 This Canadian Pure Rye Whiskey offers another ancient rare whiskey bottle, this time from the 1920’s by Hiram Walker & Sons. This is an expensive whiskey because of its uniquely rare characteristics, the Biltmore Rye is bottled just under a liter at 100 proof and is a venerable rye no longer in production.

There’s not much more to tell, as this collector’s item is not the type of special bottle to get cracked open and passed around at holidays by the serious whiskey lover.