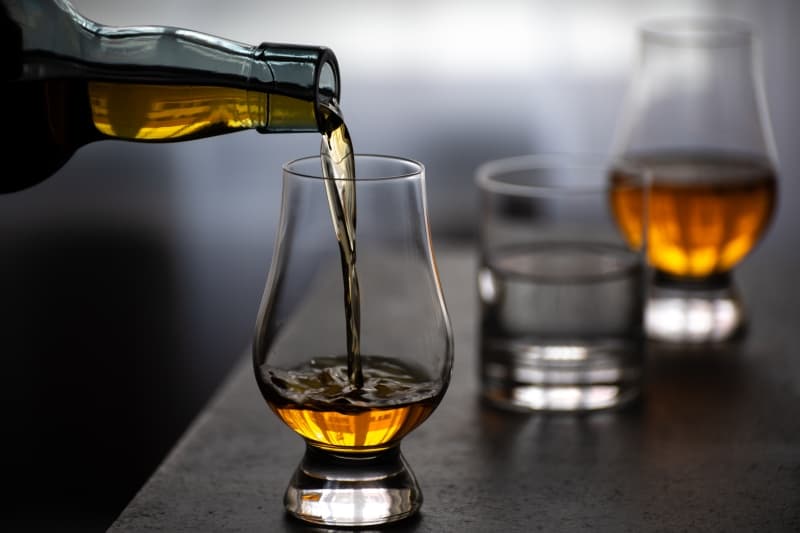 The Meteoric Rise Of English Whisky

English whiskies do not enjoy the same global acclaim that Scotch whiskies do. However, like their storied neighbors, England has a long history of producing single malt whisky. But there was a time though where the production of English whisky came to a grinding halt. More renowned for its gin, the English needed to rely on their neighbors for high-quality whisky.

The History of English Whisky 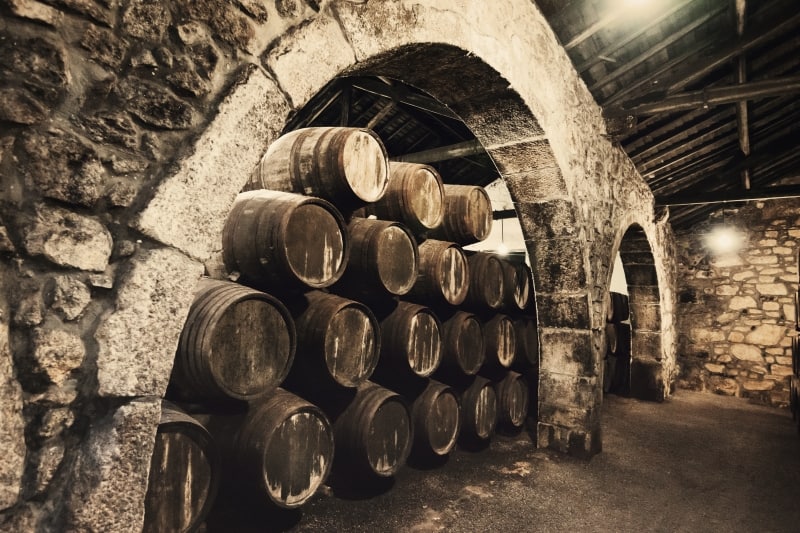 England is not new to the production of spirits. In the mid-1700s, there were nearly 20 million liters of spirit produced by the distilleries of England. However, rectifiers had a greater say on the end product than distillers. Rectifiers were people who would buy spirit from a distiller and “rectify” it to suit their own tastes, before selling it on.

This is because most of the spirit was unpalatable. Rectifiers had to redistill spirits with botanicals before they hit the market. For English distillers, the rise to prominence started in 1825. This was partly driven by the chancellor reducing duty on alcohol which allowed distillers to sell directly to the public.

The reasoning was that the changes would allow English distillers to produce higher-quality spirits, and sell more. Equally, it would hinder rectifiers who often mixed it with noxious botanicals.

The result is that English distillers were able to produce higher-quality spirits that did not need altering. Around this time, wooden casks were brought in solely for transporting the product over long distances. Before long, the unique elements that the casks gave the spirits were noticed, and this started the tradition of aging whisky in casks.

In the few years that followed 1825, the reputation of English distillers soared, and sales of English spirits boomed. By 1885, a sixth of the nation’s revenue was contributed by duties from various spirits, including whisky.

There were a few prominent distilleries at the time such as the Lea Valley Distillery in London, the Bank Hall and Vauxhall distilleries in Liverpool, and the Bristol distillery. All of these have sadly been closed now for over 100 years.

Everything came crashing down for English distillers around the turn of the century. There was a boom in demand for Scotch, which came hand in hand with changes in Scottish excise laws that made the production of Scotch more financially favorable.

The Resurrection of English Whiskies 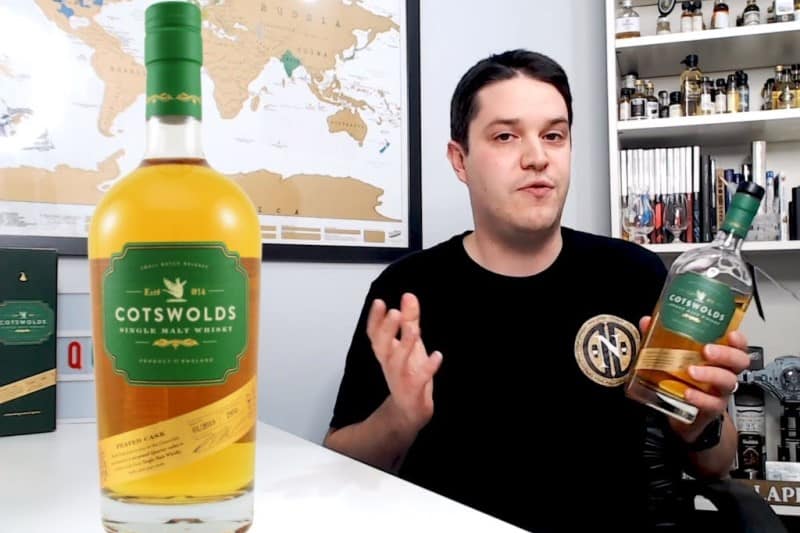 English whisky didn’t die away but more slipped into a long slumber. This was a sleep that lasted for nearly a century. The rise started with Hicks and Healey in 2003. Two drinks producers in Cornwall (St Austell Brewer and Healey Cyder Farm) came together to produce a single malt whisky.

It was in 2006 that English whisky’s second debut on the world whisky map was really felt. This came with the opening of Norfolk’s St George Distillery by The English Whisky Company. It was the first English distillery for over a century.

The company swiftly released Chapter 6, which sold out instantly. Other best-selling and ground-breaking English whiskies have followed that first release. In 2017, the company released Founders Private Cellar, the first 10-year-old English Whisky.

Another strong announcement of the rise of English whisky was made in 2013 by The London Distillery Company (TLDC). 110 long years after the closure of Lea Valley, TLDC started production, ensuring that the city of London can once again boast of being a home to single malt whisky.

TLDC went into administration in 2020, so its stay on the scenes was brief but its effect will be long-lasting. Following its lead, other distilleries have opened up in London. These include the East London Liquor Company (ELLC) and Bimber Distillery.

The ELLC was founded in 2014 by former actor Alex Wolpert. His mission was to make available locally produced, high-quality drinks at affordable prices. London rye whisky was the first to come out of the distiller. This was followed by single malt whisky, and then a wheat whisky. From producing 1,000 bottles a month, ELLC now produces about 15,000 bottles per month. It plans to quadruple production by the end of 2022.

In West London, Bimber Distillery kick-started in 2016 with a mission to produce high-quality whiskies using traditional methods. After the three years minimum maturation period, Bimber released its first single malt whisky, aptly titled The First. The release was limited to 1,000 bottles, and they sold out in less than three hours. Over in the Lake District area, the Lakes Distillery was officially opened in 2015. Just four years later, it was already making expansion plans that’ll almost double its production capacity.

The Lakes Distillery has demonstrated that English whiskies can hold their own against whiskies from anywhere in the world. The first bottle of its first single malt sold for £7,900 ($10,480) at auction, making it the world’s most expensive auction-sold bottle of whisky for a new distillery. The Lakes Distillery also made a big statement with the release of its “Quatrefoils” collections, a limited edition of English single malts.

Cotswolds Distillery is highly rated for both the quality of spirits it produces and its visitor experience. Touring the distillery gives such an amazing experience that it sees over 30,000 visitors a year.  To further enhance the experience, the company plans to invest in a new visitor center. Yorkshire is another area aiding the rise of British whiskies with two great distilleries. The Spirit of Yorkshire distillery and Chris Jaume’s Cooper King Distillery.

The Spirit of Yorkshire distillery is a farmer and brewer partnership, so it has a focus on farm-to-bottle whiskies. The standard distillery has two of the largest Forsyth pot stills outside Scotland.

The Chris Jaume’s Cooper King Distillery holds its own as a completely self-built distillery. It also stands out with its environmental responsibility. It is 100% powered by renewable energy. It is the only distillery in Europe to join the “1% for the Planet” global initiative. It sends zero waste to landfills, and it is the first England distillery to achieve carbon-negativity in the production of gins.

See more about - The Rise Of Japanese Whisky

Like its rise to prominence in the 1800s, the modern resurgence of English whisky owes much to the treasury. Formerly, the HMRC (Her Majesty’s Revenue and Customs) did not give licenses to distillers who do not have a 1,800 liter still. In the last decade, the HMRC has softened its stand, opening the door for more distillers.

So many English whiskies are innovative wonders that combine traditional whisky-making practices with creative techniques employed in producing drinks like bourbon, cognac, and even beer. Because the climate adds to the characteristics of whiskies, geography plays an important role in distinguishing whiskies.

In comparison to neighboring Scotland, England is slightly warmer and drier. The conditions accelerate the maturation of whiskies in the casks and add unique characteristics to the drinks.

The Best English Whiskies To Try

1. The Lakes Whiskymaker's Reserve No.1 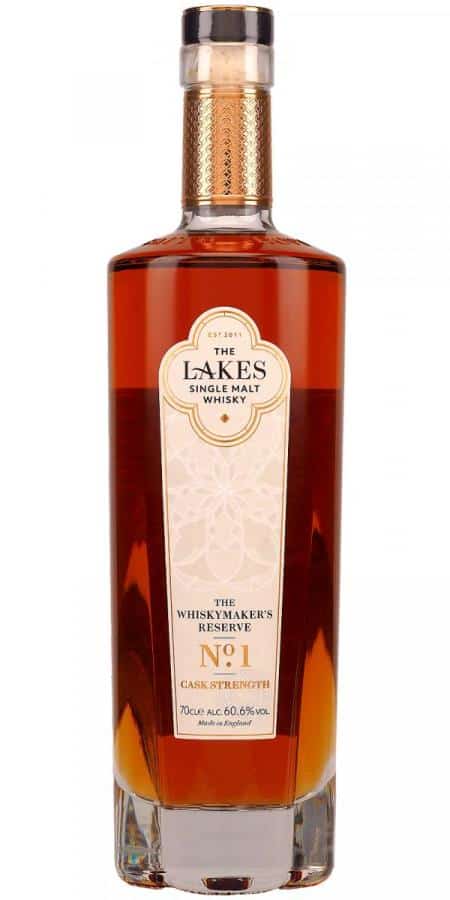 This is an English single malt whisky from The Lakes Distillery in Cumbria. It is bottled at cask strength (60.6% ABV) to ensure maximum flavor. The whisky is matured in PX and red wine oak casks that comprise American, Spanish, and French oaks.

The Whiskymaker’s Reserve No.1 is non-chill filtered and with only the natural colors derived from the oak casks, so its rich flavor and mouthfeel is preserved. The nose is vibrant with vanilla, gentle wood spice, and hints of chocolate. The palate is a mix of orange citrus, dry fruits, and ginger, and the finish is very long and warming with mouth-coating creaminess. 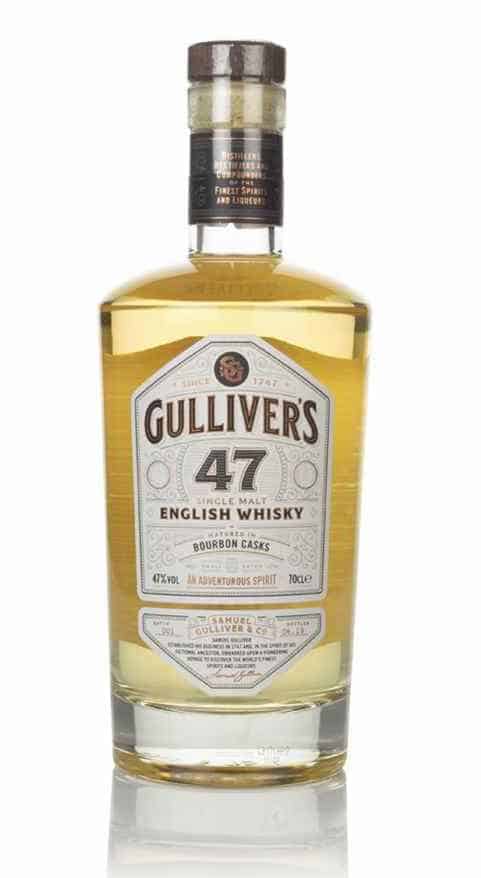 The Gulliver brand is inspired by Samuel Gulliver, an 18th-century British merchant who explored the world in search of wine and spirits. Gulliver’s 47 single malt whisky is produced in St George Distillery in celebration of Gulliver’s adventures that started in 1747. It is matured in bourbon barrels that bless it with characteristics of oak and is bottled at 47% AVB.

The oak is unmistakable in the nose of this gently peated whisky along with herbal notes. The palate is initially sweet then gives way to dry peat with hints of vanilla, before a long and satisfying finish. 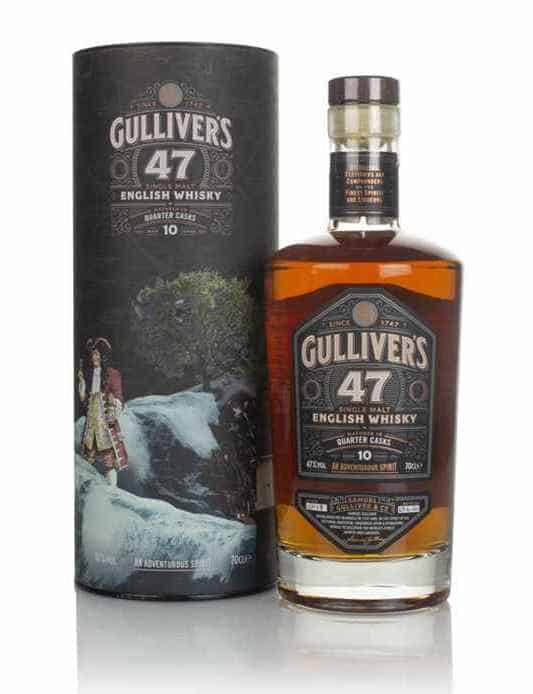 Gulliver 47 10-year-old single malt whisky also comes from Norfolk’s St George Distillery. It is an exceptionally pleated single malt whisky that is aged for 10 years. The whiskey is matured in red wine quarter casks to give it an intense spicy flavor and aroma.

Rich toasted oak is clear on the nose balanced with honeyed spices. The palate features rich peat and spiced sweetness with hints of vanilla. It leaves you with a satisfying finish of smoke and spices. Bottled at 47% ABV, the Gulliver’s 47 10-year-old single malt is a fine whisky to drink neat. 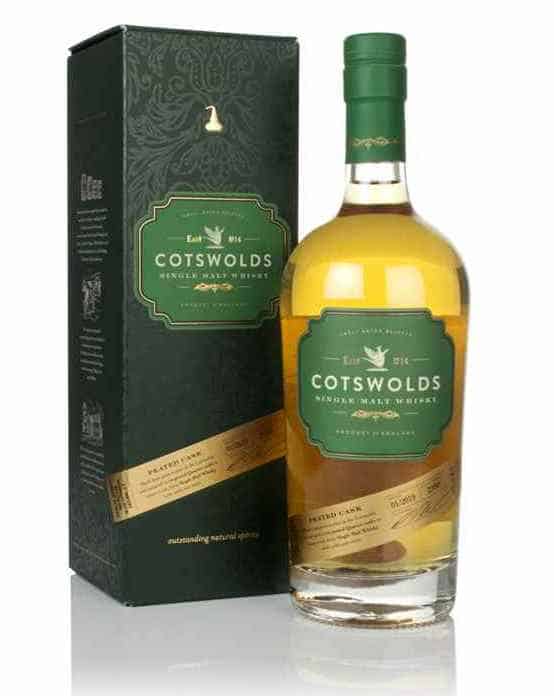 The Peated Cask Single Malt Whisky from Cotswolds Distillery is hand-crafted in small batches using ingredients carefully sourced locally. It is aged in peated quarter casks and is bottled at 63.5% AB, without chill-filtration, and with natural coloring.

To describe the taste, it’s like smoky vanilla ice cream. Thanks to the yeast used, the whisky starts with an incredibly smooth and fruity spirit. The nose is vanilla with a light charring with shades of spice and fruits. Creamy peat carries in the palate as well as light fruits. The finish is long lasting, rich in smoke and floral honey. 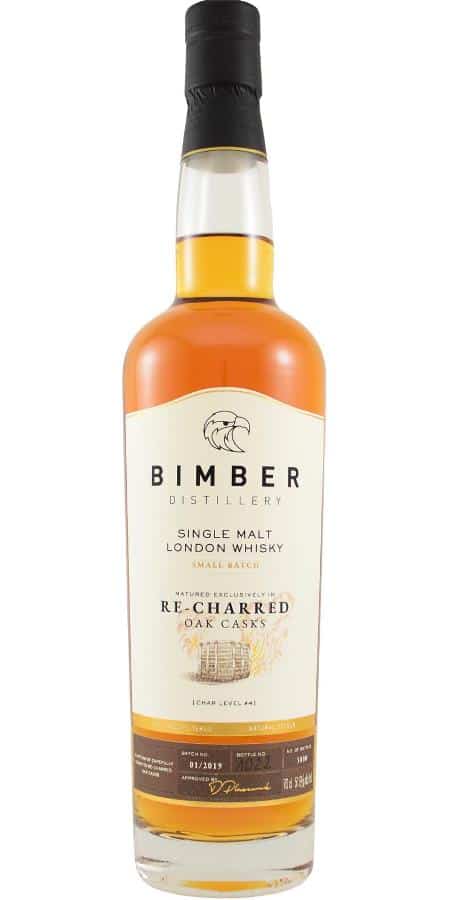 The Re-charred Oak Casks from Bimber Distillery in West London is a single malt whisky distilled from 100% malted barley. It is matured in American oak casks that are heavily charred by Bimber’s onsite coopers. The charring process caramelizes the wood sugars and influences the whisky by imparting sweet and fruity flavors.

Oak smoke and wood char are heavy on the nose with orchard fruits, sweetened honey, spicy pepper also evident. The palate is an aggregation of fruitiness. Apples, pineapples, pears, and bananas sit well with notes of charred oak and hints of ginger spice. The finish features a lingering oaky dryness with fading fruits.

Coming from the Spirit of Yorkshire Distillery, this is a single malt whisky with a Moscatel finish. The whisky is matured in 200-liter bourbon casts then it is transferred to and finished in an ex-Moscatel hogshead barrel. This gives the whisky exciting characteristics. The rare Moscatel finish blesses the whisky with floral aromas and citric notes.

The field-to-bottle single malt is bottled at natural color and without filtration. It’s bottled at 46% ABV. The Filey Bay Moscatel Finish whisky is for those that like their whiskies richly flavored. The nose is ripe tropical fruits with snaps of pepper. The palate brings together orange, crisp apple, cocoa, and hints of ginger. The finish is soft and warms with fading sweet spices.

Unlike Scotland, England is not associated with whiskies but they have an equally long history of producing single malts. English distillers were prominent after the first quarter of the 1800s, but a combination of events saw them close shop, and English whiskies entered a century-long sleep.

In 2003, English whiskies started their rise from their slumber. Distillers are opening up everywhere in the country and are producing very interesting and richly flavored whiskies. Not shackled by the traditions and stiff regulations in Scotland, English distillers have more freedom to experiment with processes and ingredients. English whiskies are now on the rise and show no signs of slowing down.

See more about - The Difference Between Bourbon And Whiskey