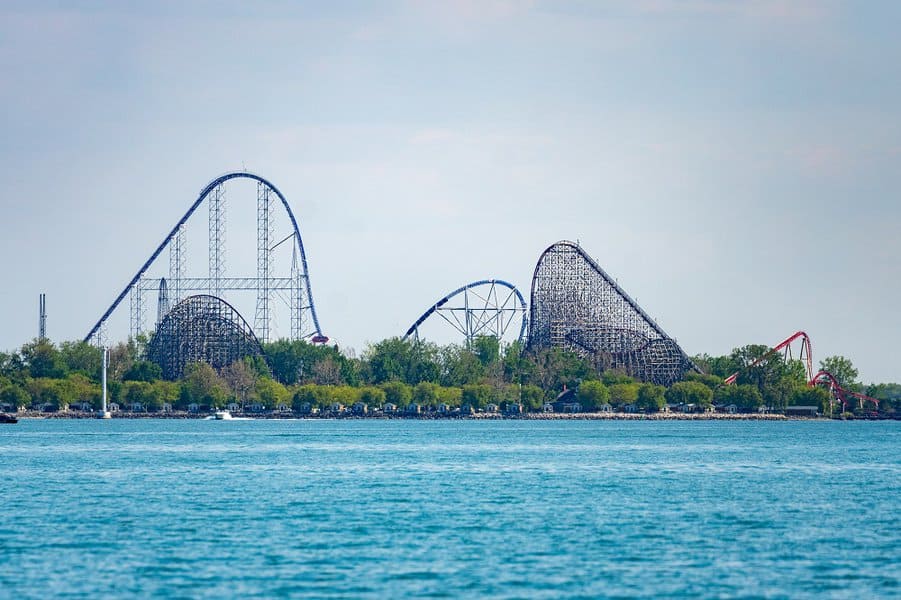 What Is the Scariest Roller Coaster in the US? These Are Our Top 12 Picks

People love being scared. Whether it’s watching a horror movie late at night or driving with your best friend who’s only just got their driver’s license, there is something about fear that gets the blood pumping. That’s one of the many reasons why people love going on roller coasters. Being strapped into a small carriage and propelled around a single track through tight corners where you spend half the time upside down isn’t everyone’s cup of tea, but for many adrenalin junkies, riding roller coasters gets them very excited. With so many different roller coasters dotted around theme parks across America, it got us thinking about what is the scariest roller coaster in the US.

Some might fancy Goliath at Six Flags Great America while others prefer the scream-inducing Kingda Ka at Six Flags Great Adventure. To be honest, there are so many to choose from it’s hard to narrow it down, but we’ve done our best to find the scariest roller coasters that will leave you looking like a ghost once the ride comes to an end.

Of course, what is considered scary is subjective, as one roller coaster that might scare the shit out of you might be seen as tame by a friend. Either way, all of the roller coasters discussed below will cause your adrenalin to spike as you’re hurtling through loop-the-loops at speeds over 90 mph. So in no particular order, here are our picks for the scariest roller coasters in the States.

What Is the Scariest Roller Coaster in the US? These Are Our Top 12 Picks 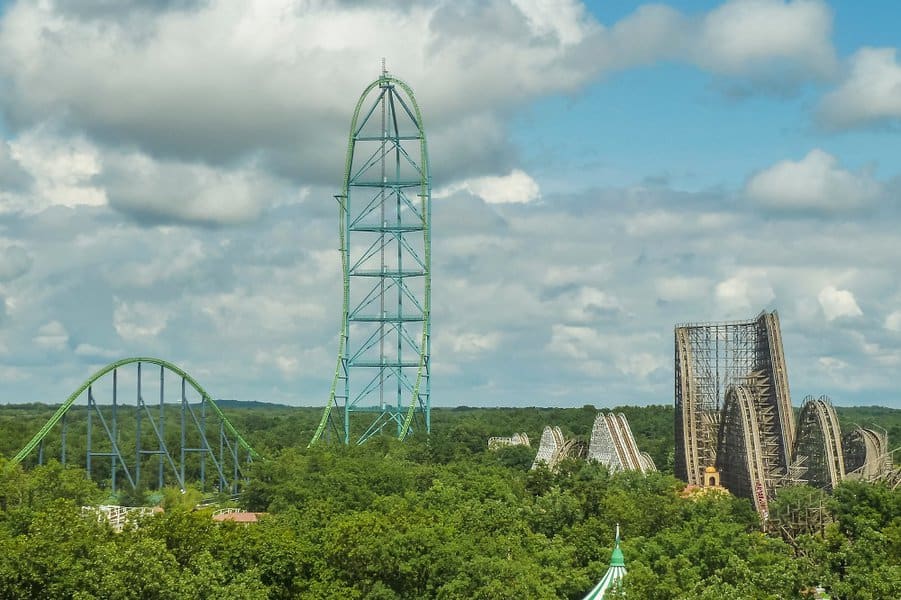 Tallest roller coaster in the world? Check. Fastest roller coaster in North America? Check. Pants soiled by the ride’s end? Check. Kingda Ka is a hell-raising experience like no other. This upside-down U-shaped coaster has a top height of 456 feet and goes from 0 to 128 mph in just 3.8 seconds.

Shooting out of the boarding area you will climb straight up at a 90-degree angle before plummeting back down in a 270-degree spiral that will have your stomach doing flips. Incredibly this ride is all over in less than a minute but will leave you with a rush unlike you’ve ever experienced before and have you lining up for a second go, or spewing your guts up. 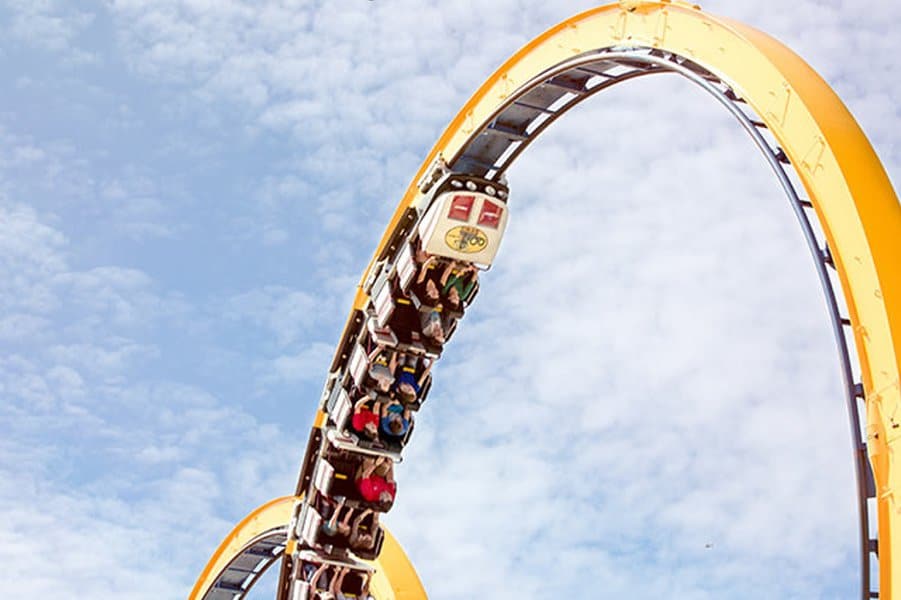 With a G-force rating of 4.2, the Cannibal coaster at Lagoon Amusement Park is certainly one for thrill seekers. Riders slowly climb 208 feet before plunging 160 degrees into an underground tunnel where things really pick up. Cannibal consists of a 140-foot inverted loop, a water feature, and three major inversions.

While the max speed of 70 mph isn’t as fast as some of the roller coasters on this list, the tight corners, and epic G-forces more than make up for that.

Built to welcome in the new millennium, this hulking coaster stands a whopping 310 feet high and hurls along at 93 mph, making it one of the fastest roller coasters as well as one of the scariest. When it officially opened in 2000, it was classified as a giga-coaster, as it was not only the largest and fastest roller coaster but one with the longest drop.

While the records it once set have been broken by newer roller coasters, Millennium Force still brings the scares and is one of Cedar Point’s biggest attractions. 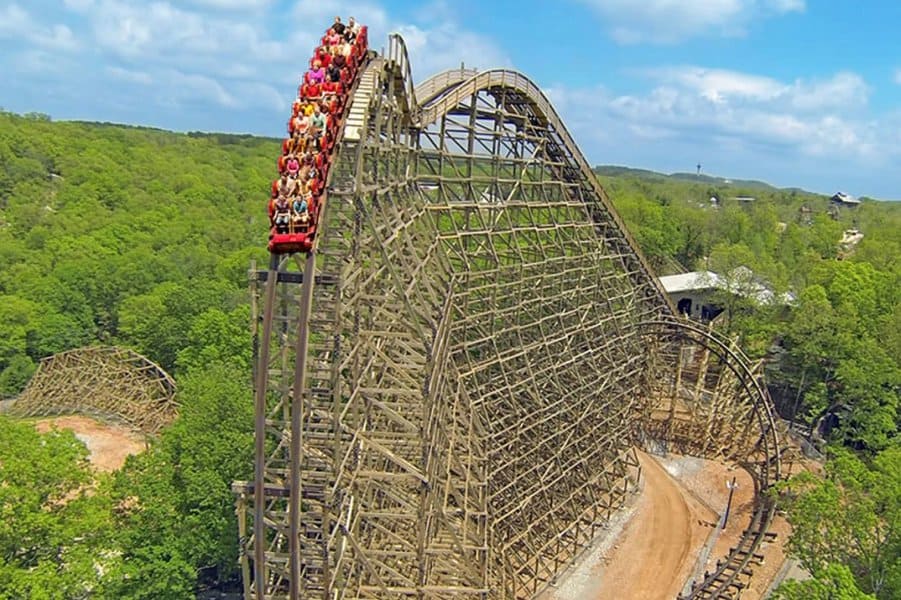 Voted Best New Ride of 2013 worldwide by Amusement Today, Outlaw Run is a $10 million roller coaster that will leave you needing a change in underwear. It is the only wooden roller coaster to feature a double barrel roll (that’s 720 degrees) with a first drop of 162 feet (more than 16 stories) at 81 degrees. It’s also one of the fastest wooden roller coasters in the world, reaching a top speed of 68 mph. 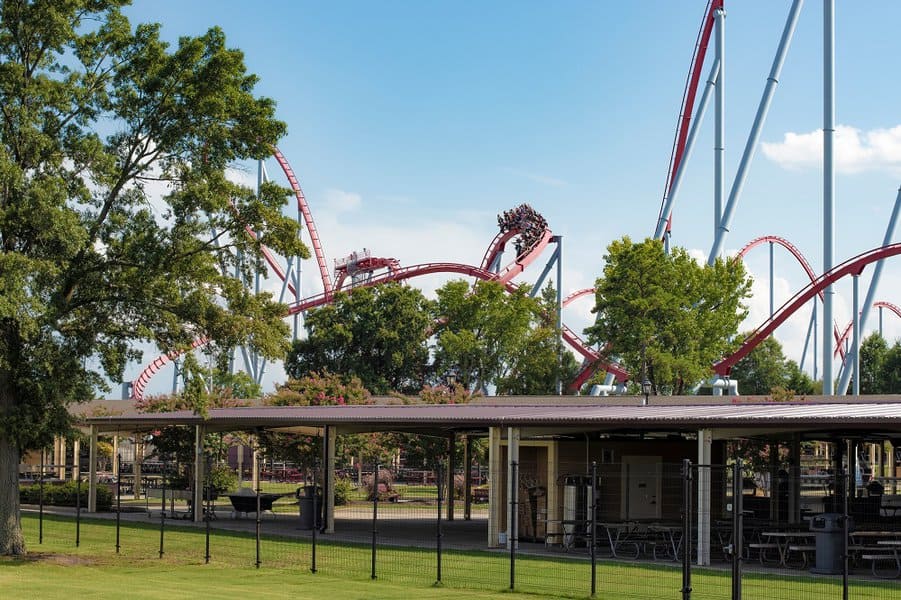 Not only is Intimidator one of the top ten tallest roller coasters in the United States that also reaches speeds of 80 mph, but the seats have no sides so it feels like you could be thrown into the air at any moment. Yeah, no thanks.

Inspired by the late NASCAR driver Dale Earnhardt, this four-minute ride begins with a 232-foot hill before racing down a 74-degree drop. It features seven massive drops in total across 5,316 feet of track that will have you hanging on for dear life. 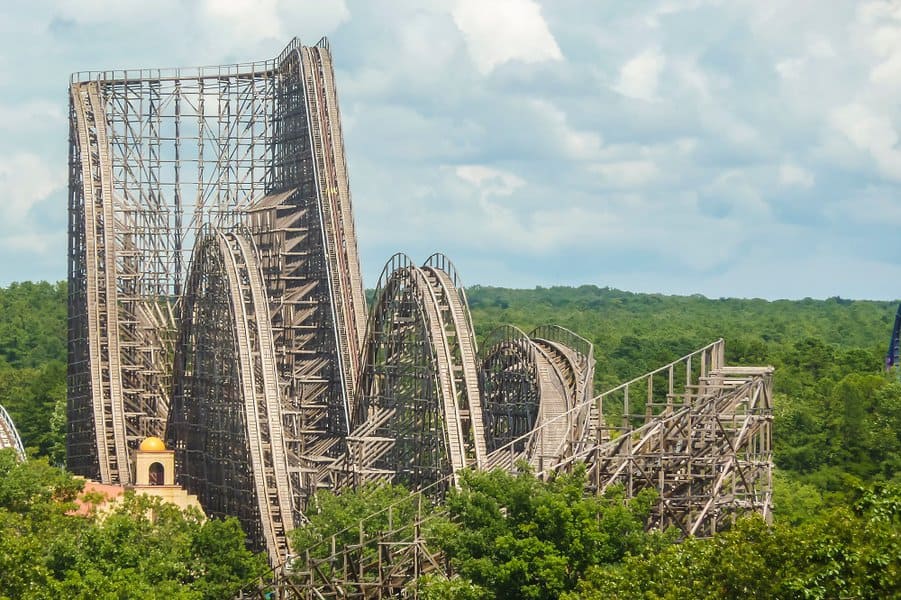 Ranked the “Top Wooden Roller Coaster” in 2012 and 2017 by the esteemed  Amusement Today, El Toro is a complex roller coaster with a classic feel but modern construction. Like its name, El Toro, which means “the bull,” riding El Toro feels like you’re sat on a bucking bull as you whizz around the 4,400 feet track at 70 mph.

After climbing almost 19 stories high the coaster drops 176 feet at a 76-degree angle, making it the steepest drop of any wooded coaster in North America. There are several big hills and drops that make riding El Toro a once-in-a-lifetime experience. 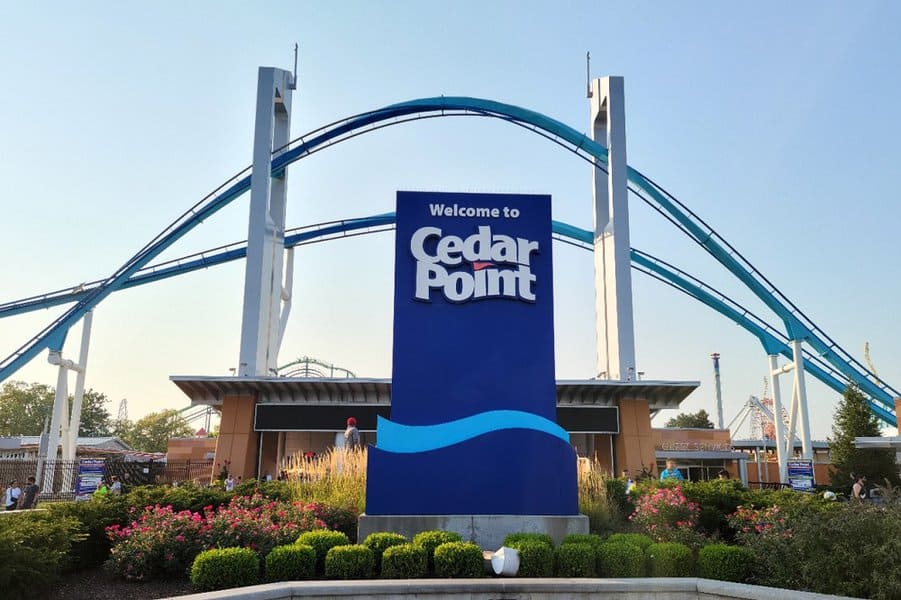 Another roller coaster found at Cedar Point in Sandusky is the ominously named GateKeeper. One of the first attractions you see when you walk into the theme park, this giant coaster broke seven world records when it first opened in 2013.

GateKeeper is a wing coaster, which means riders are seated on either side of the track with nothing above or below them. So you are pretty much suspended in the air as you race at 67 mph across 4,164 feet of track that includes being inverted six times and a stomach-churning 164-foot wing-drop maneuver. Best save lunch for after riding GateKeeper. 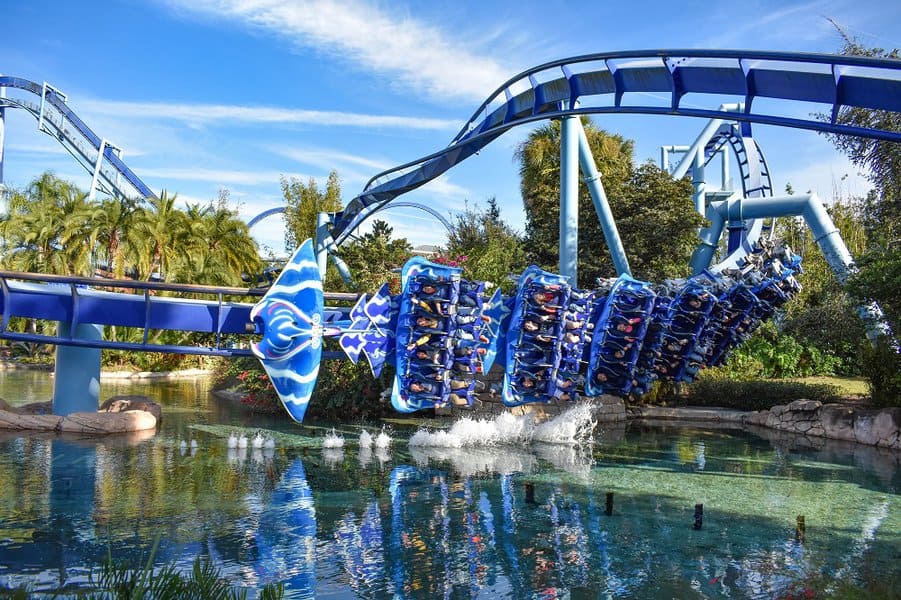 This roller coaster is a little different in that you are strapped into a ride shaped like a manta ray, which is where the coaster gets its name from. While it isn’t as high or fast as many of the other coasters across the US, the Manta glides close to the earth’s surface, giving riders a different feeling while flying around the track.

There are four inversions and at one point you are upside down facing the water and it feels like you could drop in at any moment. Be prepared to get a little wet on this ride. 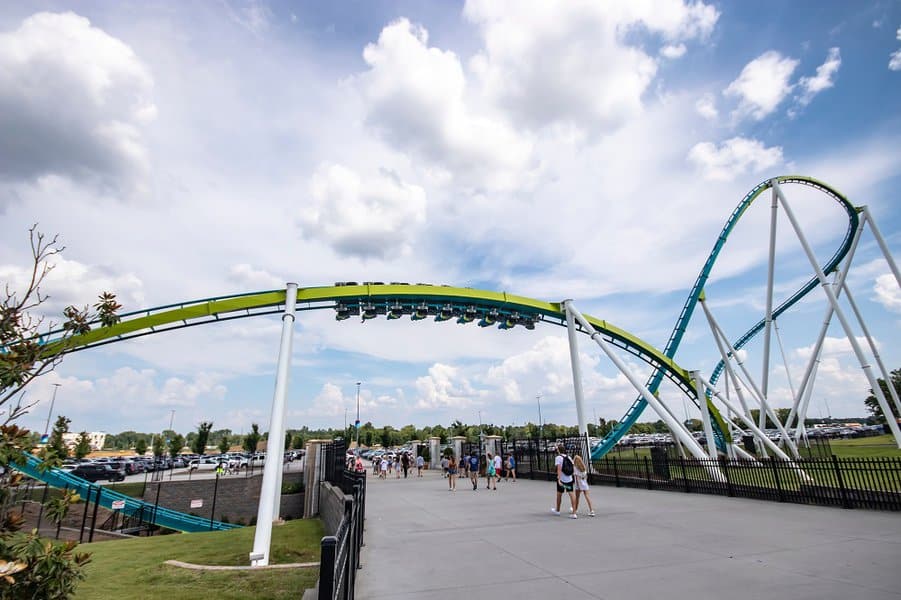 Another roller coaster classified as a giga-coaster, Fury 325 opened in 2015 at Carowinds in Charlotte, North Carolina. The longest giga-coaster in the country at 1.25 miles long, Fury 325 crosses both North and South Carolina state lines and includes a peak height of 325 feet followed by a dramatic 81-degree drop, a 190-foot tall barrel turn, and a top speed of 95 mph. This coaster is batshit crazy and whips through the air like nobody’s business. Not for the faint-hearted.

The third roller coaster to appear from the state of Ohio, Banshee will have you screaming your lungs out. This steel monster has seven heart-pumping inversions, a 167-foot lift hill, 150-foot curved first drop, and zero gravity roll. Propelling you toward your destiny at 68 mph, Banshee is an experience anyone who loves high-speed thrills needs to try. 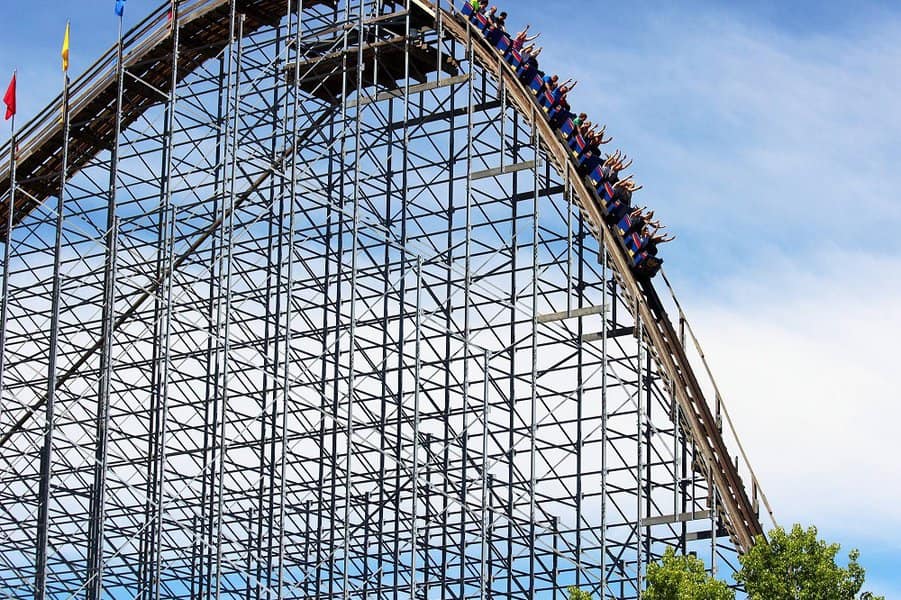 First opened in 2006, The Voyage is a wooden roller coaster that was voted by TIME Magazine as the best wooden coaster in 2013. Over the course of 1.2 miles, you will experience three sections of 90-degree banking, five underground tunnels (a world record), and more twists and turns that you’ll remember at the ride’s end. 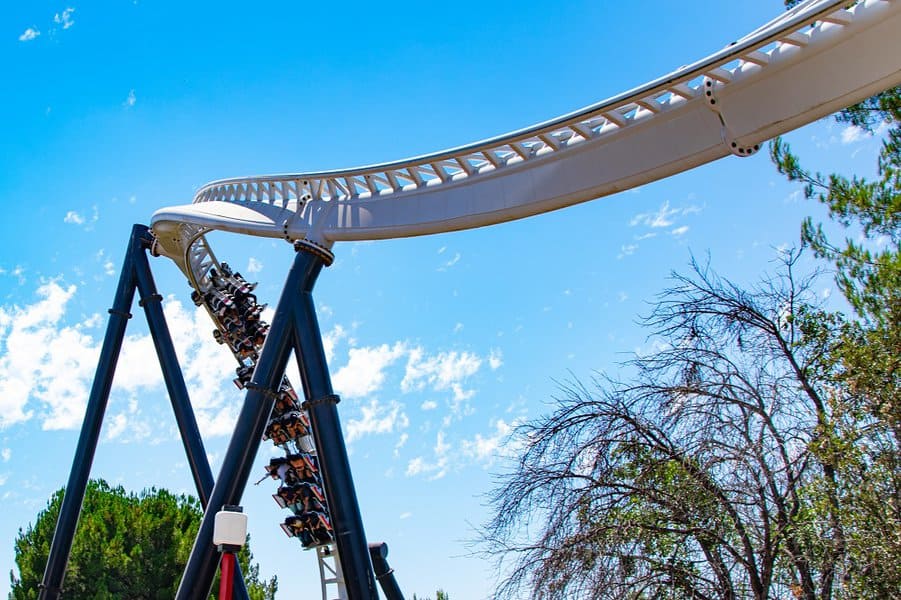 There is no roller coaster in the world like the X2. This frightening contraption is known as a fifth-dimension roller coaster. What does that mean you ask? Well for starters, the seats rotate 360 degrees, meaning you never know what way you will be facing as the coaster speeds around the track at 76 mph.

Soaring 200 feet in the air before the first drop, the X2 combines music, sound effects, and fire to torment your sensors. There are also two “raven turns” – which are half loops that change midway through and become sheer drops, only adding to the heightened sense of fear this coaster provides. By the time this one ends, you’ll be wondering if you’ll ever want to ride another coaster again.