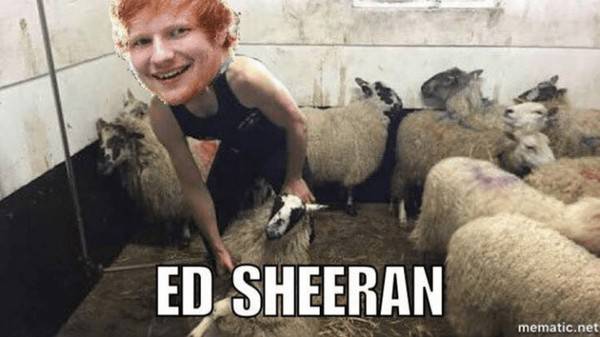 Love him or hate him, Ed Sheeran is here to stay. The ginger-haired musician is often the butt of jokes from music lovers, but that hasn’t stopped him from dominating the music charts. He has sold more than 150 million records worldwide and four of his five albums have topped the Billboard charts. Official Charts Company named him the artist of the decade (2010-2020) and Spotify named him the second most-streamed artist of the decade (2010-2020). He also has an MBE (Most Excellent Order of the British Empire), which is a big deal in the UK. In short, he’s a fucking rock star (just without the rock). Despite all his success, poor old Ed cops a lot of flack from fans and those who find his music boring. This has led to a slew of Ed Sheeran memes popping up online. These memes poke fun at everything from his music to his appearance, although they are all in good fun.

So read on and have a laugh at Ed’s expense with these 20 hilarious Ed Sheeran memes. 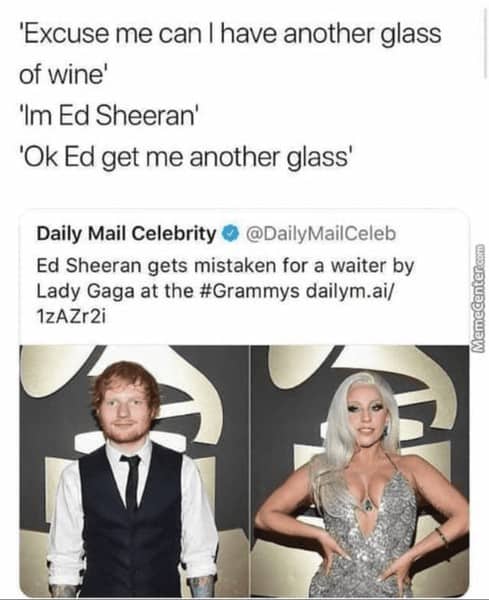 This embarrassing moment actually occurred at the Grammys where Lady Gaga mistook Ed Sheeran for a waiter. This celebrity news cause a bit of an uproar at the time, but Sheeran took it in his stride and found the funny side.

2. When Your Legs Don’t Work Like They Used To Before 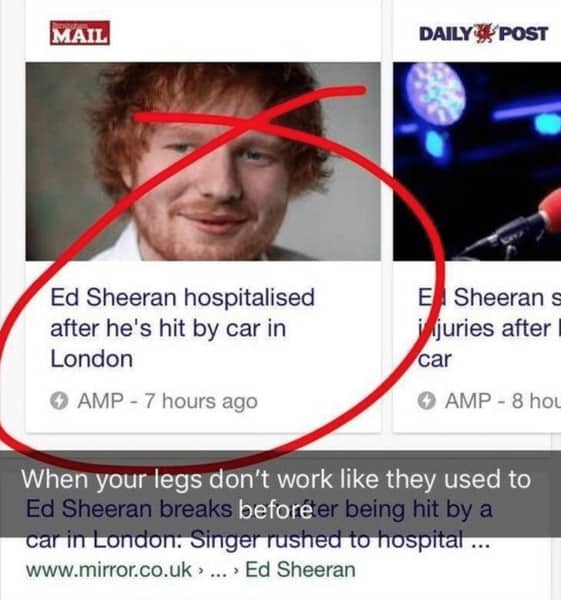 This funny Ed Sheeran meme uses lyrics from one of his own songs to discuss that time he got hit by a car. Clever.

3. Put In Some Effort Ed 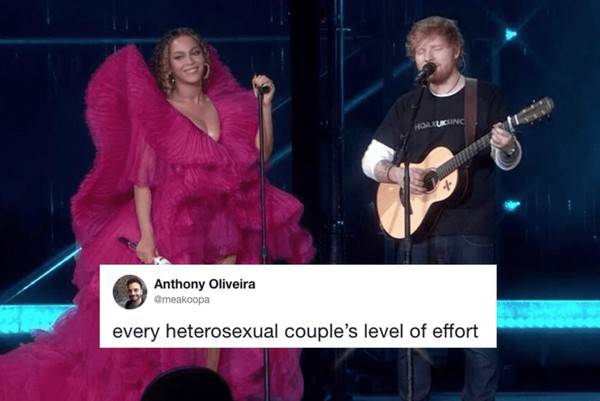 This meme has a lot of truth to it. How often do you see women getting dressed to the nines while their partner rocks up wearing jeans and a t-shirt? A great meme from Twitter user @meakooper.

4. Can I Copy Your Homework? 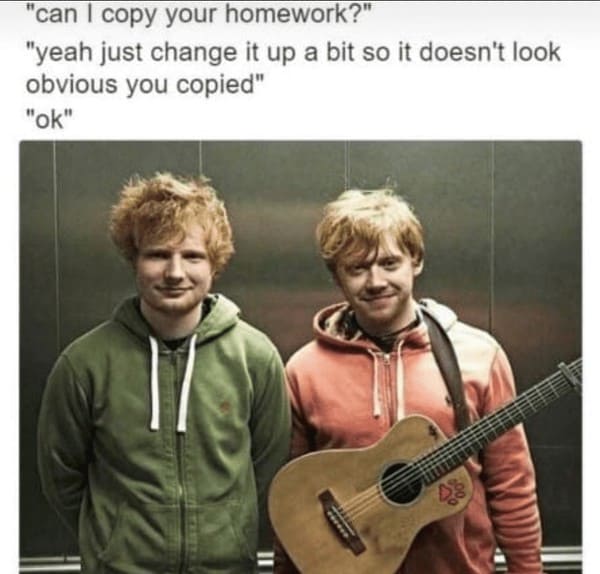 This funny Ed Sheeran meme takes the piss out of Sheeran and fellow redhead Rupert Grint from the Harry Potter movies. It’s a play on the two looking similar and how when you copy someone’s homework you change it slightly so the teacher won’t notice. Gold.

5. Once You See It You Can’t Unsee It 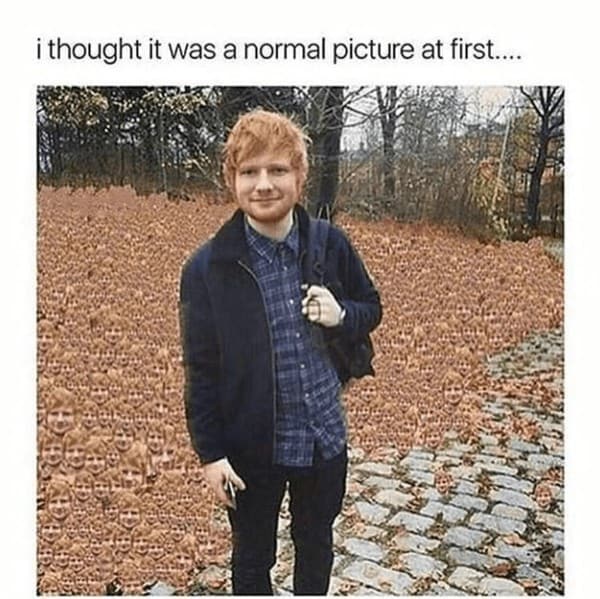 Ever wondered what hundreds of Ed Sheeran faces would look like crammed together? Here you go. 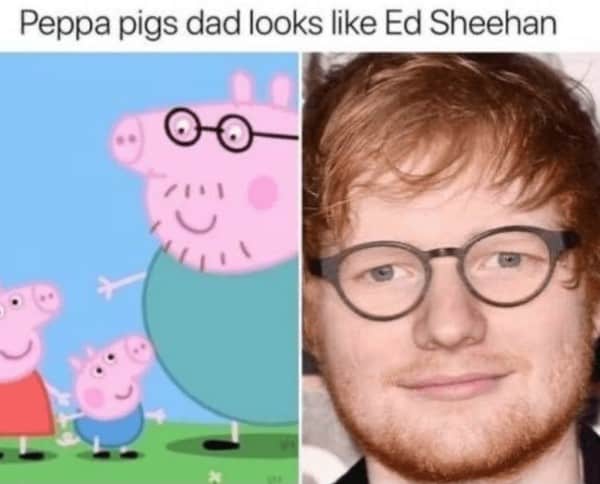 7. Ed Sheeran Has No Girlfriend 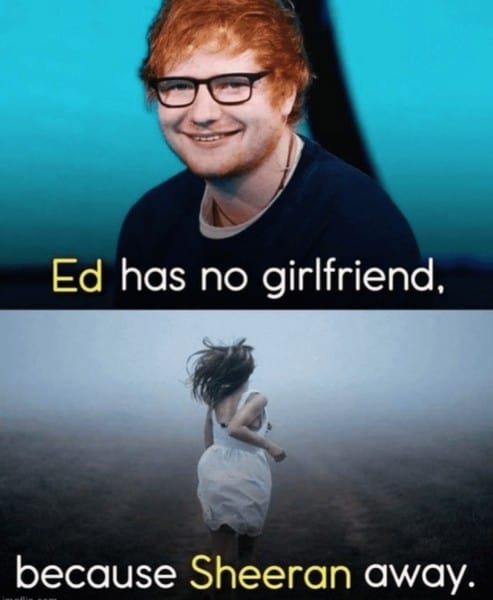 This one is horrible but will still have you cracking a smile. It’s a play on Ed’s name that is very much the essence of a dad joke. 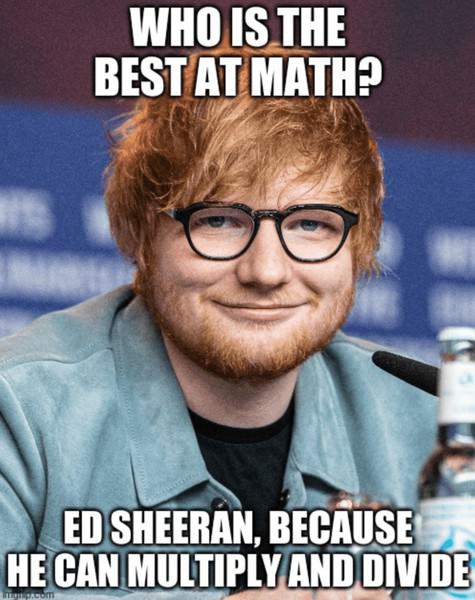 Ed Sheeran of course. With albums titled +, x, ÷, and =, it makes sense that Sheeran is the best pop star at maths. 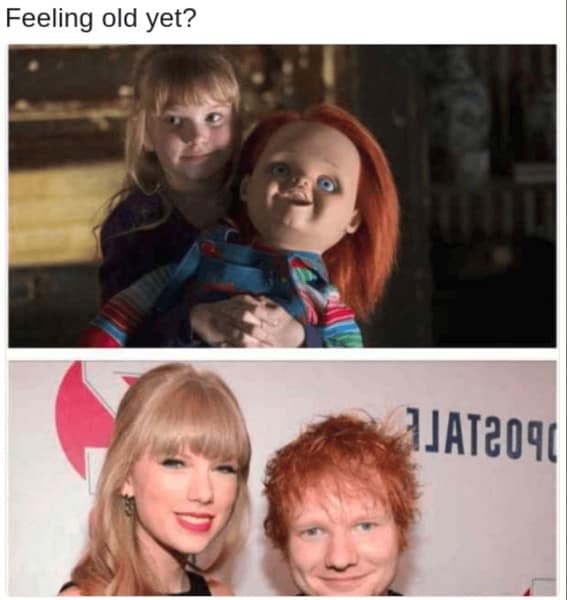 This meme of Ed Sheeran and Taylor Swift uses an image from the Chuky TV series to show what the two musicians looked like as friends in their early days.

10. The Four Horseman of Bread 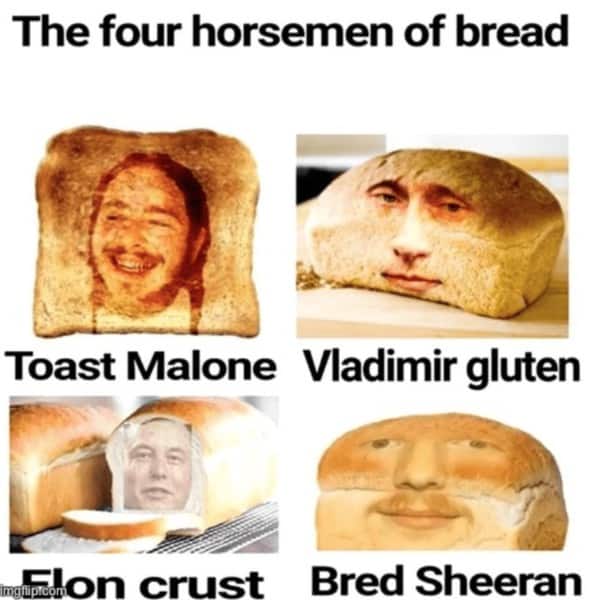 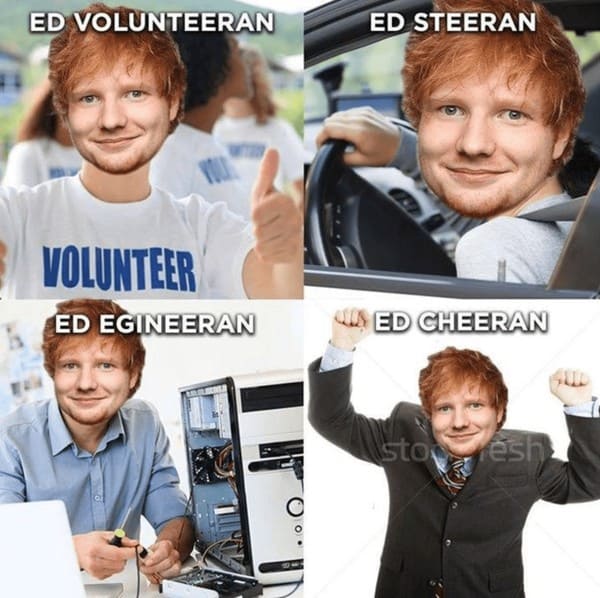 This meme showcases all the jobs Ed has done based on his last name. Ed Engineeran is my favorite. 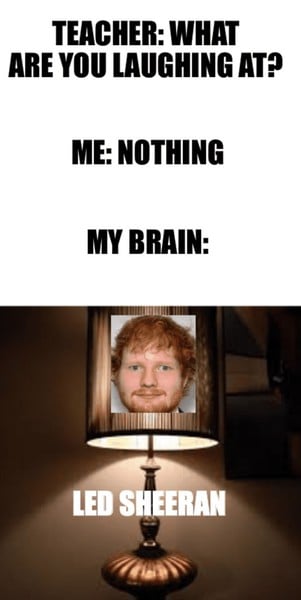 Another meme that uses Ed’s last name as a pun. Hilarious. 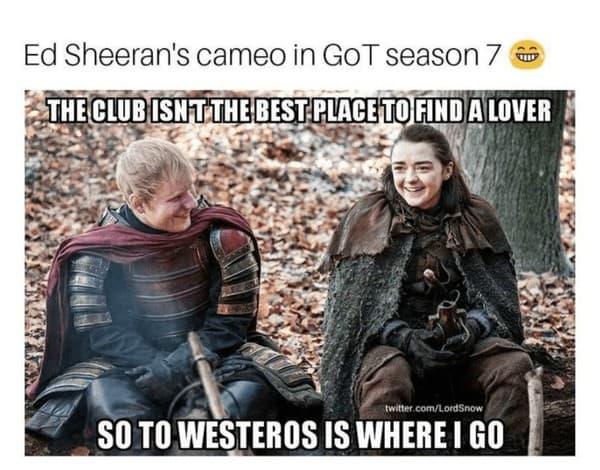 Ed Sheeran’s cameo on Game of Thrones didn’t go down well with fans. But it did give us a slew of top-quality memes, with this one featuring Sheeran, Arya Stark and lyrics from his hit song Shape of You with a GOT twist.

14. Ed’s Albums Through the Years 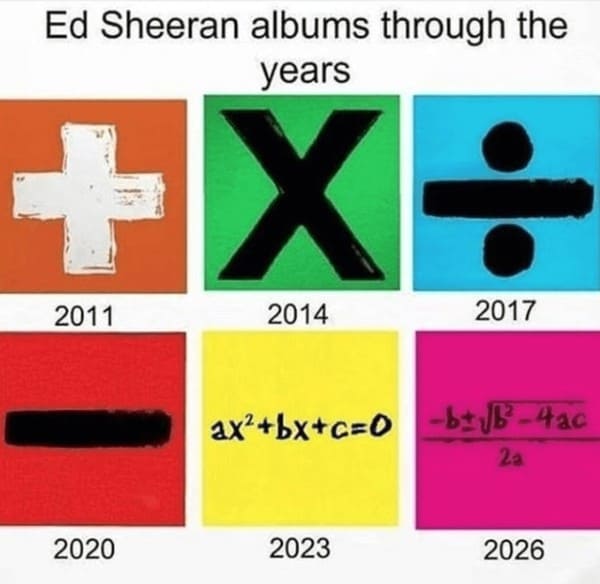 Ed Sheeran has used mathematical symbols for the titles of his albums, with this meme predicting his next couple of records will be long-form equations. 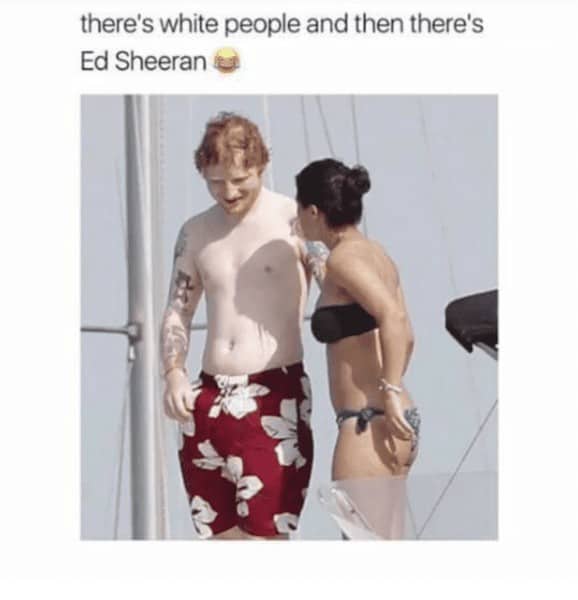 Ed Sheeran sure is white. 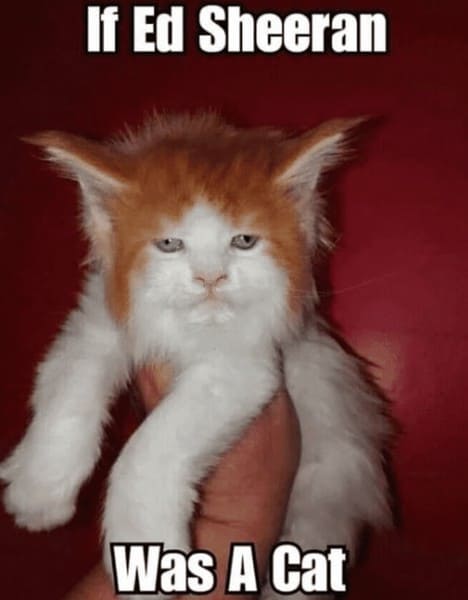 You can see the resemblance. 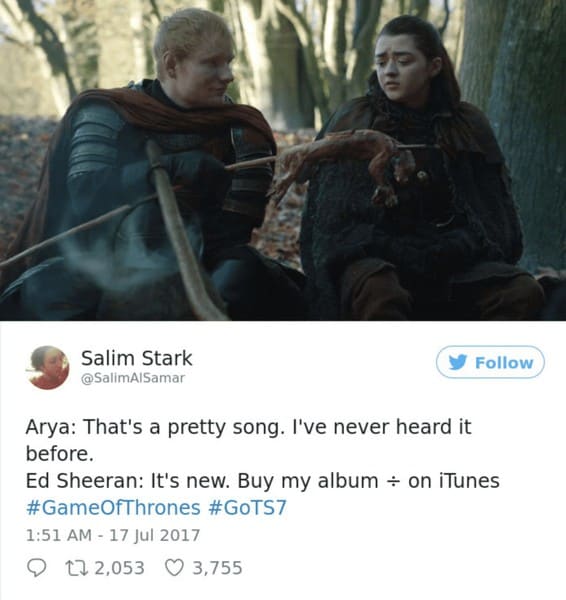 Another meme from Ed Sheeran’s appearance on Game of Thrones. This time it finds him using the show as a way to promote his music, which could be everything from a new album to a music video. Smart guy. 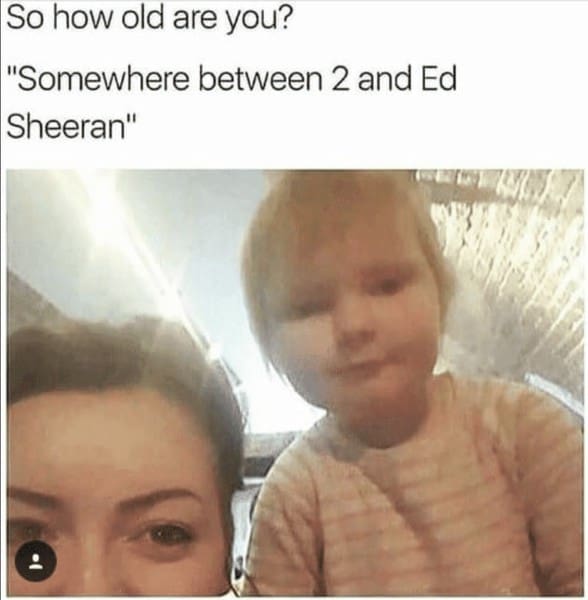 When you’re a baby but look like Ed Sheeran in his 20s. 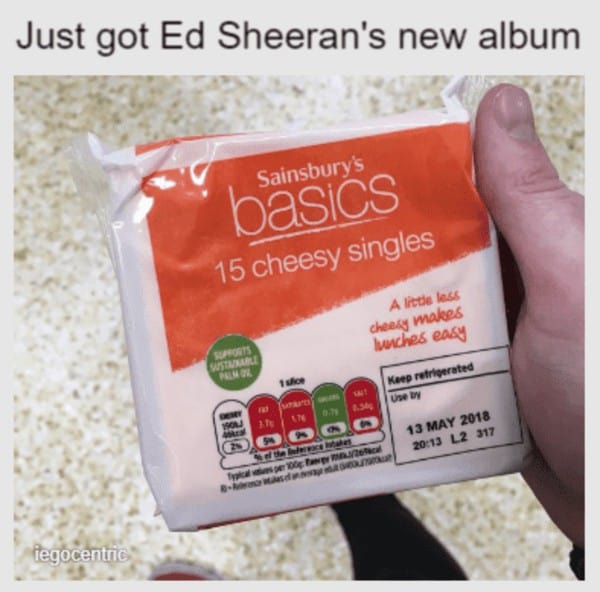