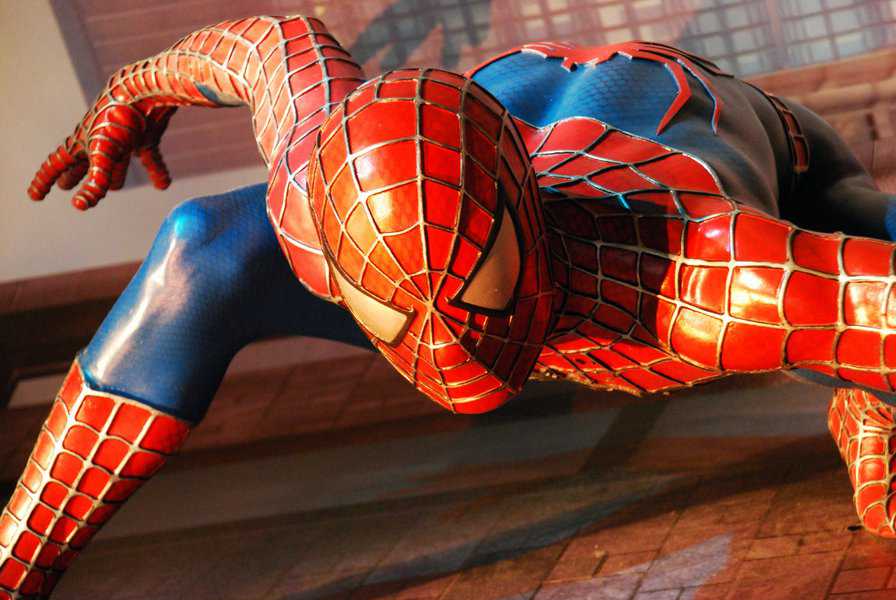 Spider-Man has never been more popular. The Marvel web-slinger is up there on the Mount Rushmore of superheroes alongside Batman, Superman, and Captain America. Created by Stan Lee way back in 1962, Peter Parker, aka Spider-Man, has had a huge impact on the comic book world. Not only is he a star in the graphic world (and in the world of Spider-Man memes), but his move to the big screen has been welcomed by fans.

While both Tobey Maguire and Andrew Garfield are great as the costumed hero, it’s Tom Holland’s take on the character that’s got the online world talking. His Spider-Man has crossed over into the mainstream and become part of pop culture. As is often the case, this has resulted in Spider-Man memes becoming popular.

Many of these Spider-Man memes center around the latest flick, Spider-Man: No Way Home. With all three crime fighters appearing, it has led to some very creative content. But there are many other Spider-Man memes that reference the older films and the comic books. While others are just funny and relatable memes that feature Spidey. Below are 20 of the funniest that are sure to bring a smile to your face. 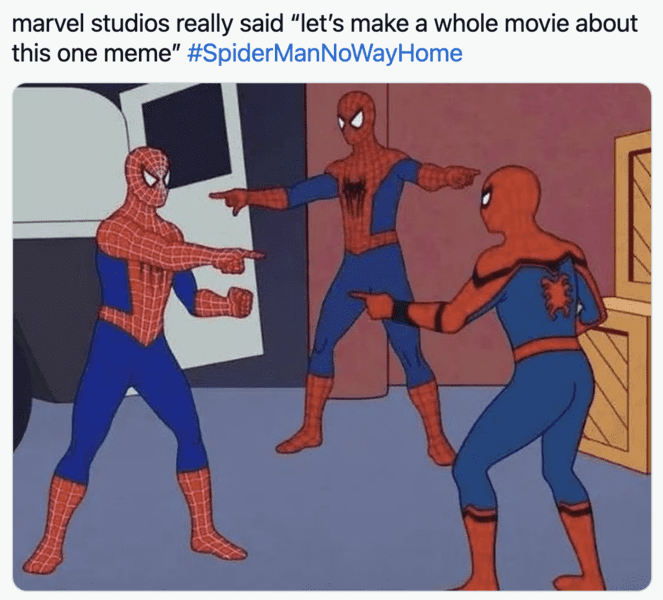 This is arguably the most famous Spider-Man meme ever created. Taken from an episode of the 1960s cartoon Spider-Man, this meme features three Spider-Men pointing at each other. Turns out this image became a reality with the release of Spider-Man: No Way Home. It’s not often a meme becomes a movie, but that’s exactly what MCU fans got. Tremendous.

2. You Know, I’m Something of a Scientist Myself 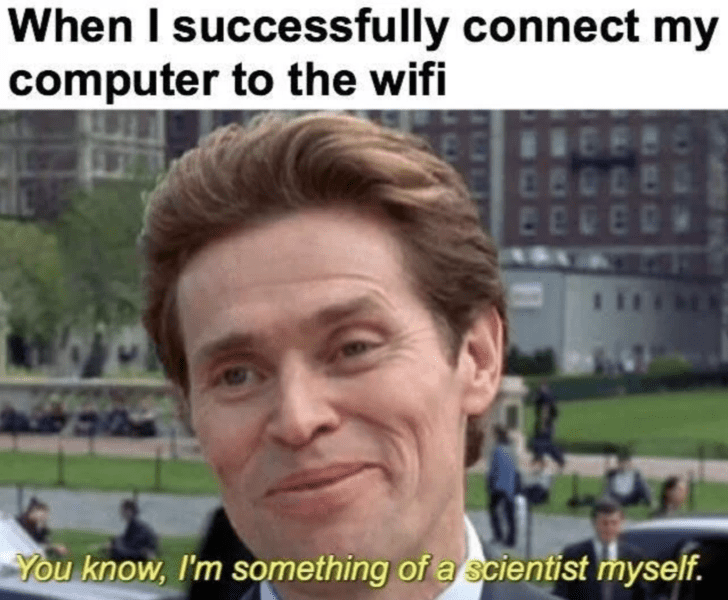 Another classic Spider-Man meme, this one features Willem Dafoe, the best on-screen Green Goblin. He has several scene-stealing moments during Spider-Man, with his line, “You know, I’m something of a scientist myself,” an absolute classic. This meme uses the quote as a way to signify how impressive it is when you perform an easy task such as hooking up your internet. 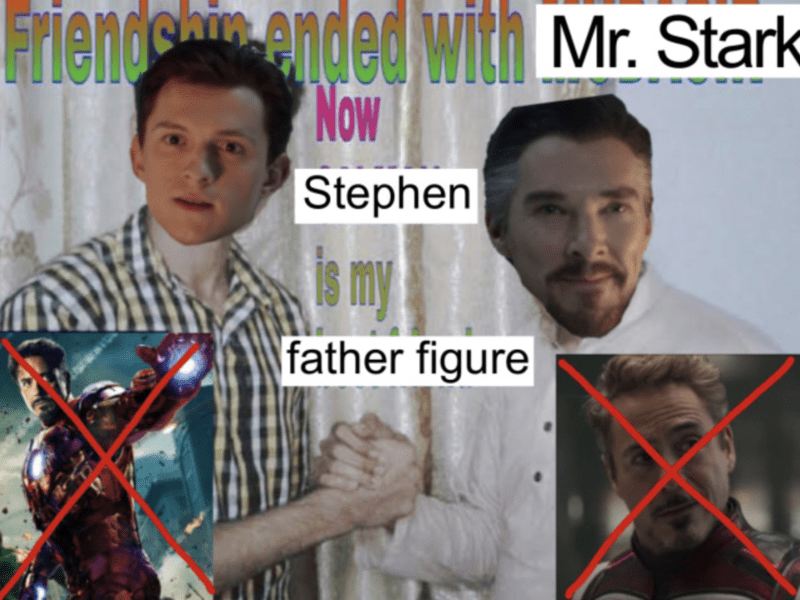 Now that Tony Stark (Robert Downey Jr.) is no more, Spider-Man needs a new mentor. Enter one Doctor Strange (Benedict Cumberbatch). This meme borrows from another known as the ‘Friendship ended with Mudasir’ meme that originated in Pakistan. It’s crude looking but that’s what makes it so funny. 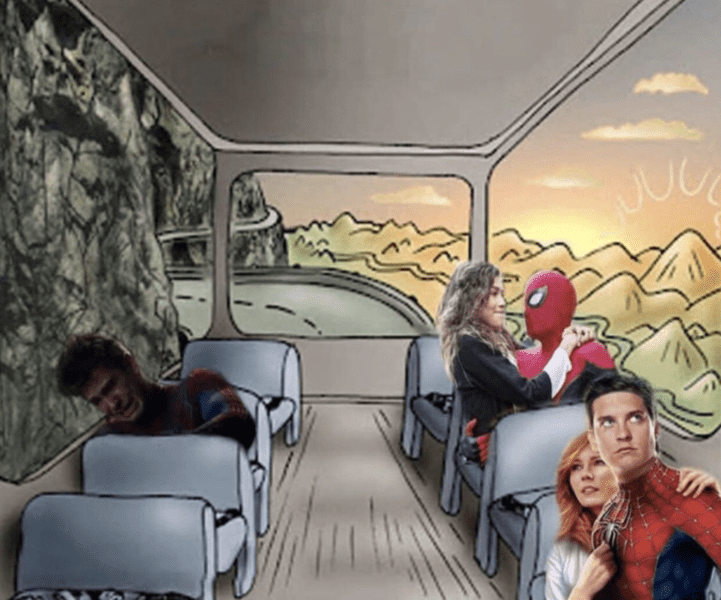 Poor old Andrew Garfield. While Tom Holland and Tobey Maguire got the girl, Garfield let his slip through his fingers. This meme is inspired by another that features two people on a bus, one happy and one sad. In this version, it’s Garfield looking sad and lonely. 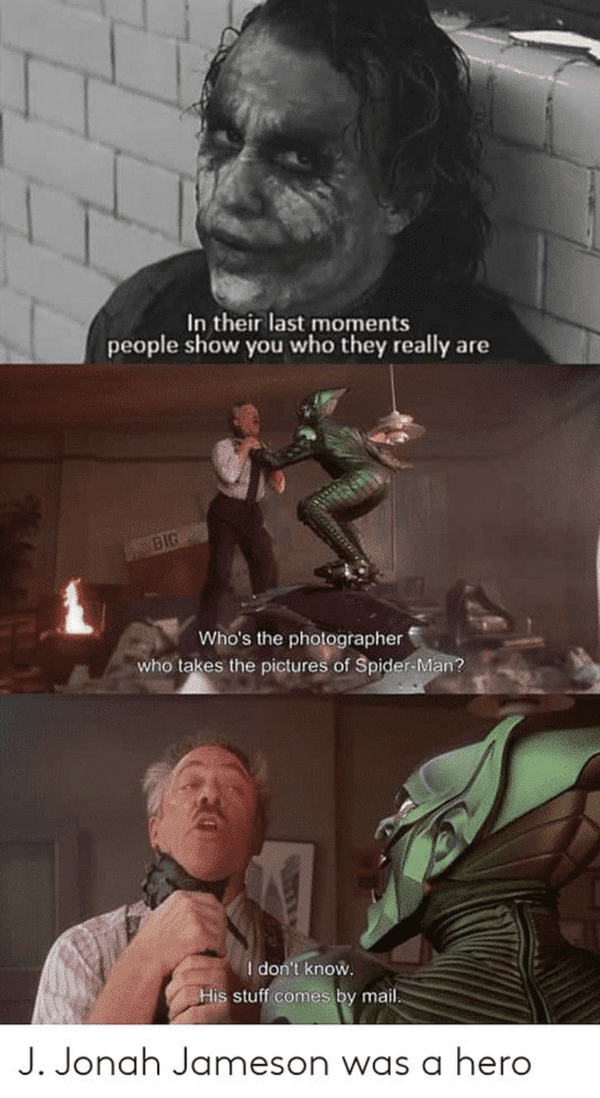 J Jonah Jameson spends his time trying to uncover who Spider-Man really is. When faced with death at the hands of the Green Goblin, he refuses to divulge the information, making him the true hero of the Spider-Man movies. 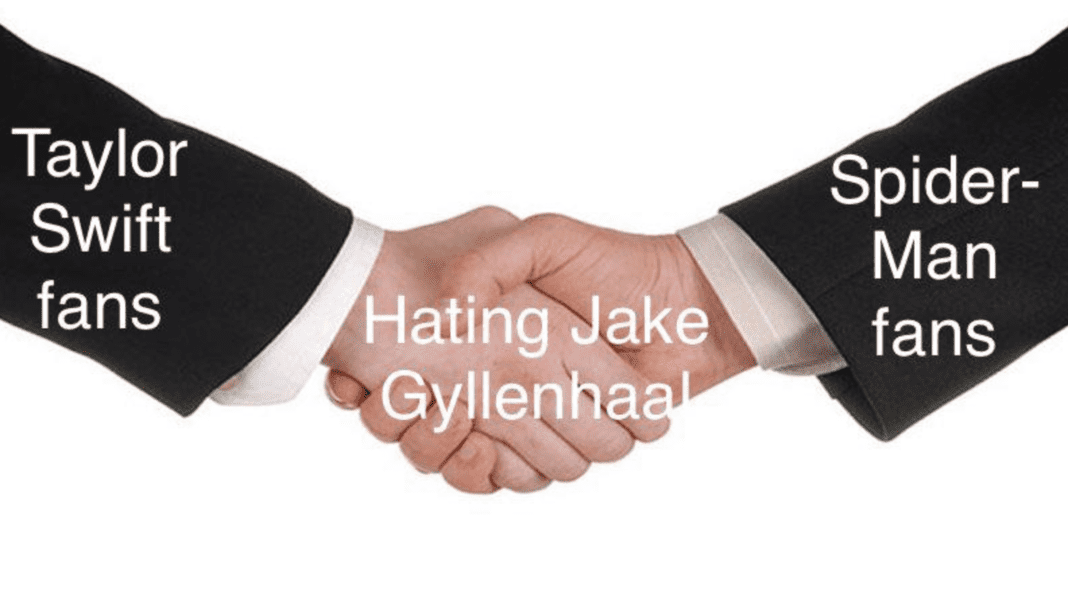 Jake Gyllenhal has come under fire of late for his treatment of Taylor Swift during their short romance. He’s also the main villain of Spider-Man: Far From Home. This has made him an enemy of Swift fans and Spider-Man fans, demonstrated wonderfully by this funny meme.

7. Tell Me the Truth 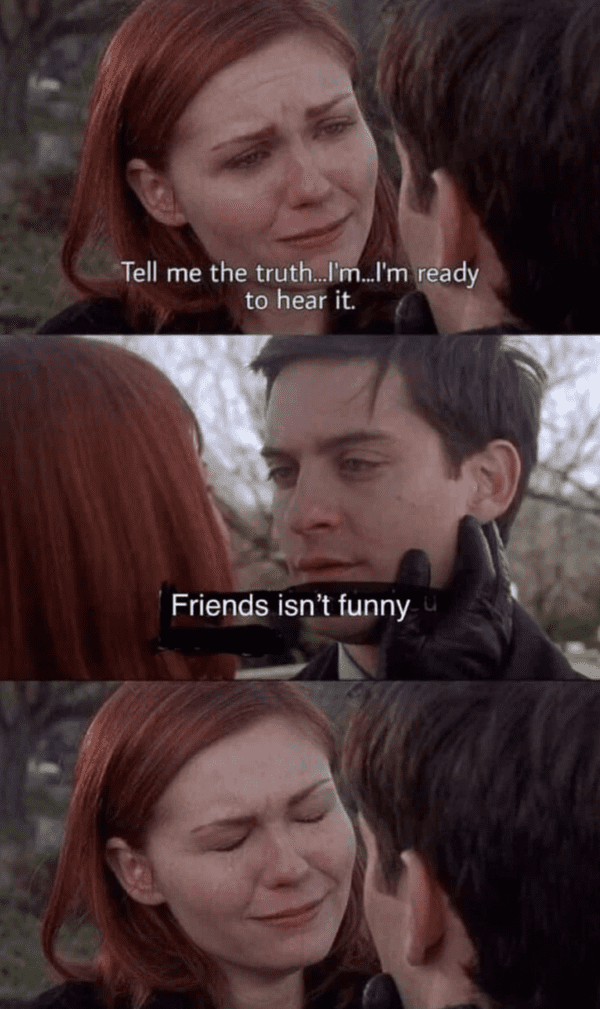 The first Sam Raimi Spider-Man film ends on a bit of a downer. Despite the feelings he has for Mary Jane, Peter Parker tells her they can only be friends. He wants to protect her from his superhero alter ego. This version of the meme features Mary Jane asking Parker to tell her the truth, with the answer changed to “Freinds isn’t funny.” Got him!

There are many more scandalous versions of this meme out there, but I thought we’d keep it family-friendly with this one. It’s still pretty funny and sure to irk fans of Friends.

8. Sometimes I Feel Far From Ok

This meme is very relatable to anyone who has seen Tom Holland’s Spider-Man trilogy. It particularly applies to the latest installment that leaves you with all the feels. 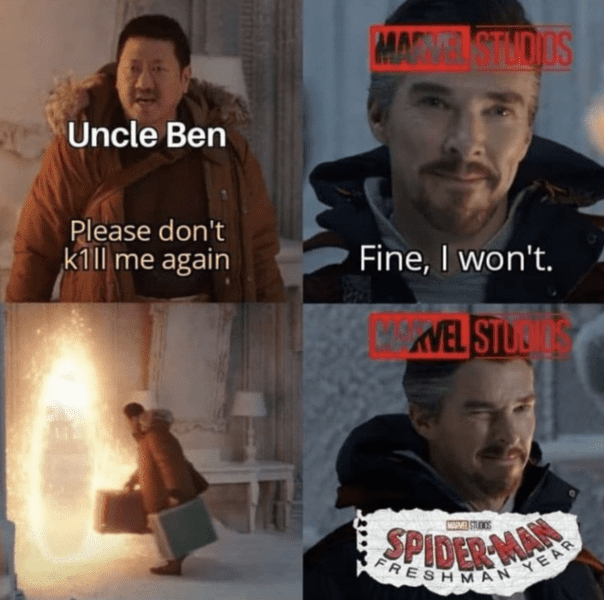 Uncle Ben is another character from the Spider-Man universe who often gets a raw deal. He gets killed or is already dead in all the big-screen Spider-Man movies. With a new Disney Plus TV series set to air in the coming years, there is a chance Uncle Ben will get another life. But not if this meme is anything to go by.

10. Miles Morales vs. The Avengers 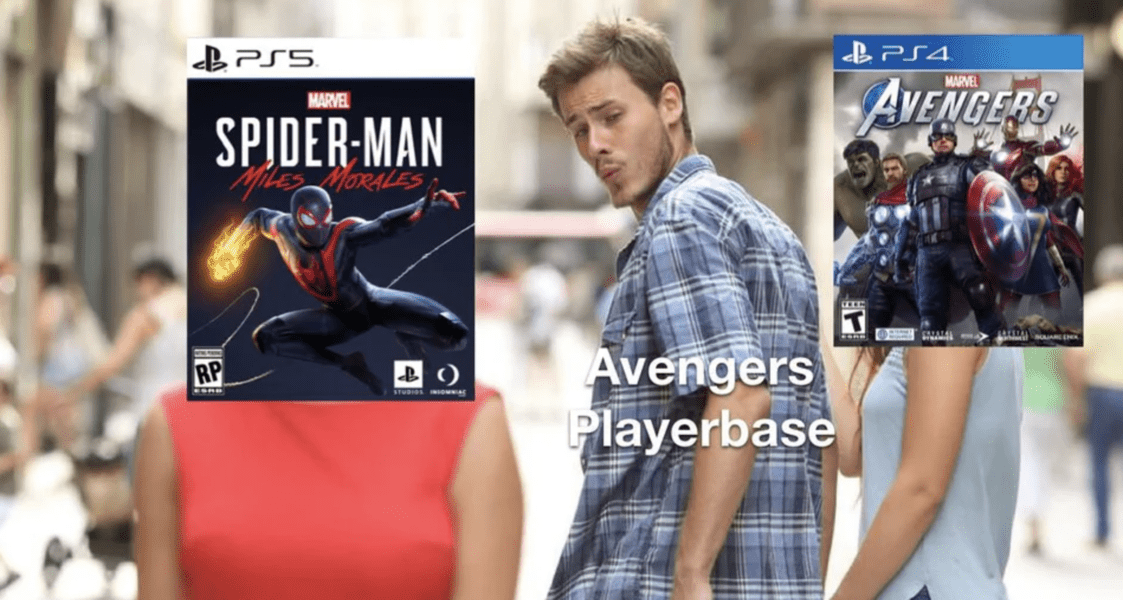 The ‘Distracted Boyfriend meme is iconic, and this take on it is sure to have you laughing. The Avengers video game was meant to be the best Marvel game ever created, but that turned out to be wrong. Very wrong. While Spider-Man does appear, it’s a horrid video game, with many fans instead opting for Spider-Man Miles Morales. This is a great game and one that everyone should play, as shown by this meme. 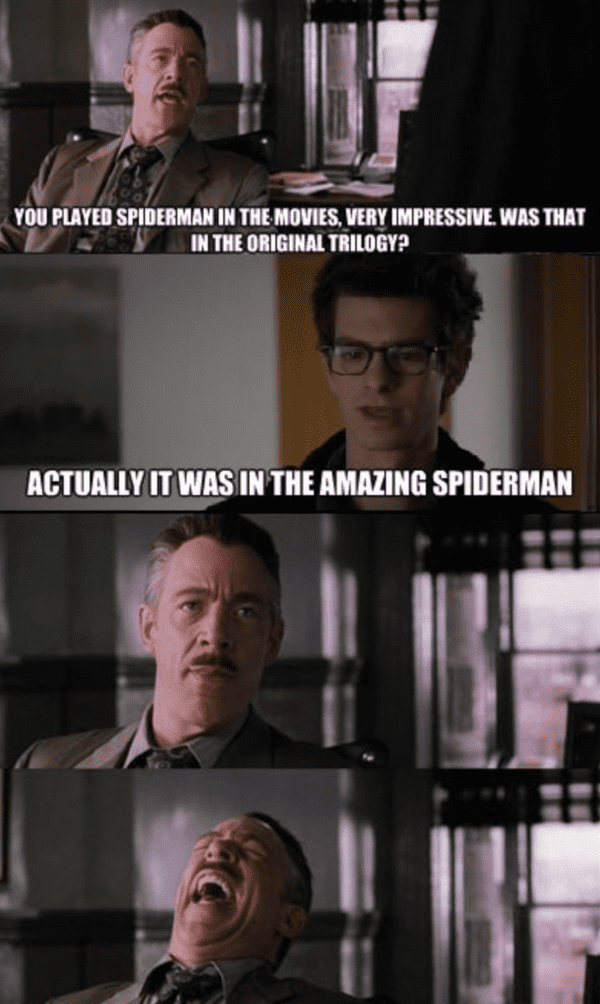 For some reason, Andrew Garfield doesn’t get the respect he deserves. Sure, The Amazing Spider-Man isn’t the best Spider-Man film, but it isn’t the worst. Not that you would know looking at this meme. The use of J Jonah Jameson is great too. 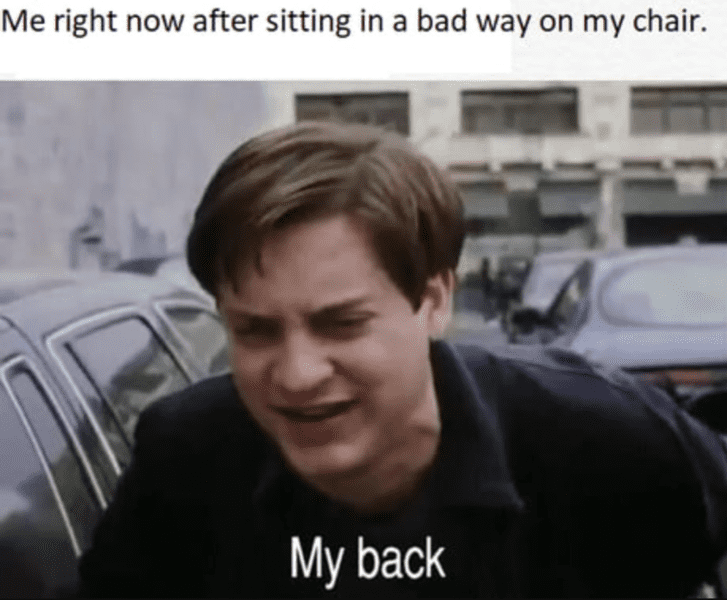 A great moment from the Tobey Maguire movies is when Peter Parker hurts his back. This moment has been turned into multiple memes, with this one of the best.

13. Your Webs Come From Where? 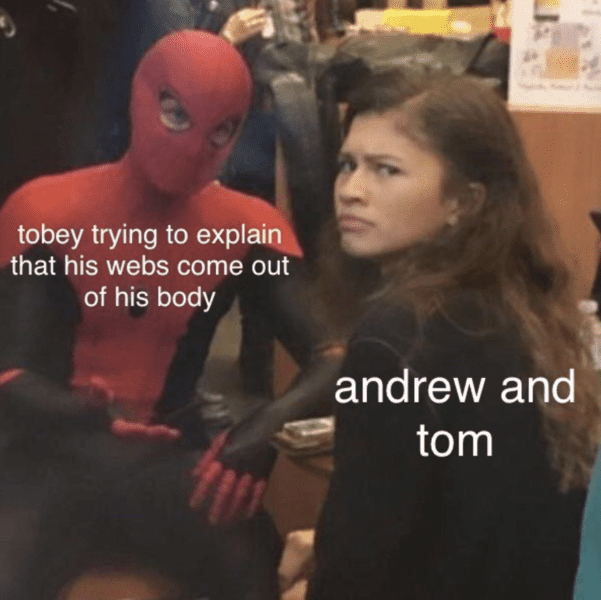 Using an image of Tom Holland as Spider-Man and Zayenda looking puzzled, this is another great Spider-Man meme that has been all over social media. 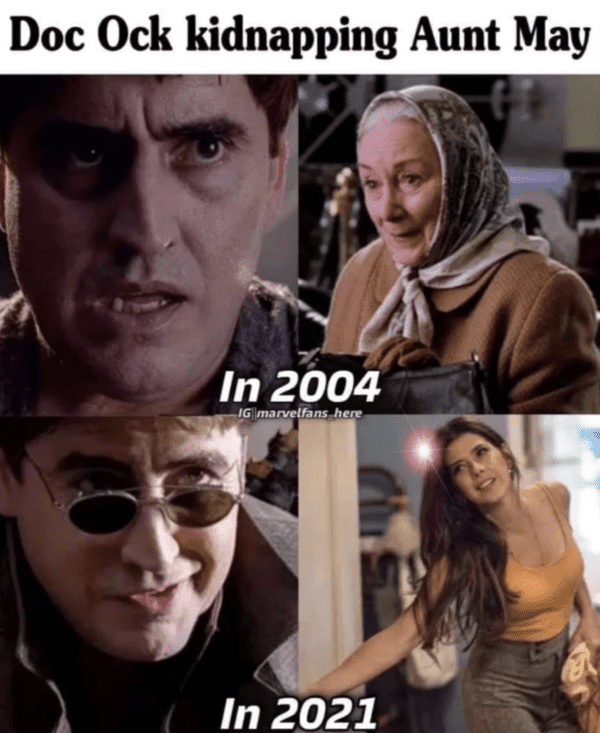 There is no doubt Doctor Octopus (Alfred Molina) prefers Aunt May in the multiverse to the one he kidnapped in the first Spider-Man film. 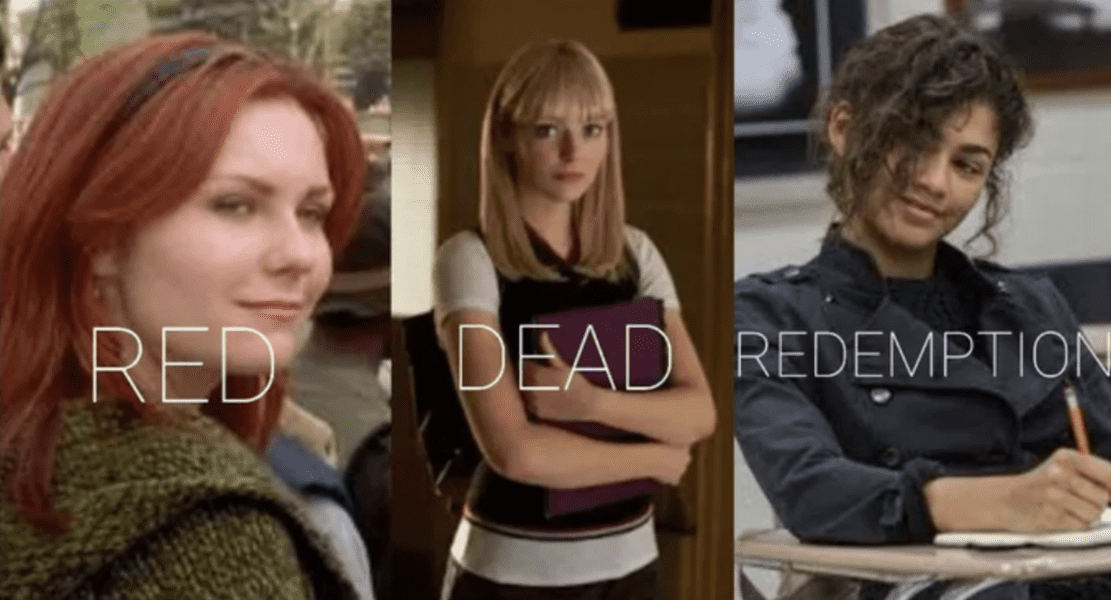 This meme is hilarious. It uses the three main love interests of Spider-Man to detail a visual representation of the classic Rockstar game Red Dead Redemption. 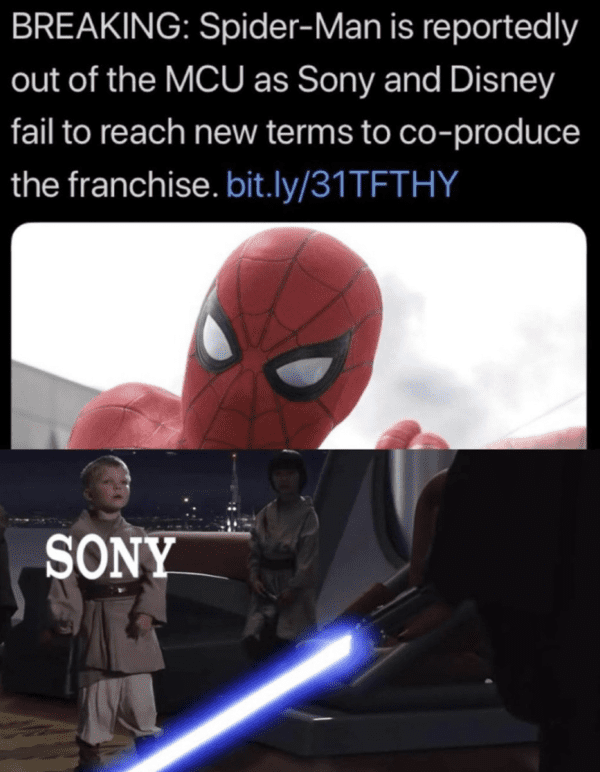 It looked like there might never be another Spider-Man film when Sony Pictures and Disney couldn’t come to an agreement about the character. This resulted in a ton of memes, including this that shows Disney finishing off Sony using an image from Star Wars: Revenge of the Sith. 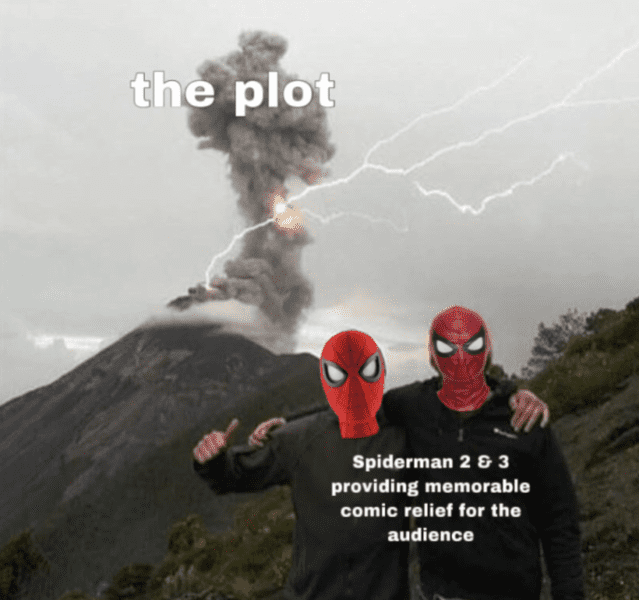 This is a very concise review of Spider-Man: No Way Home. The plot is destructive but at least you get some laughs from the old Spider-Men. 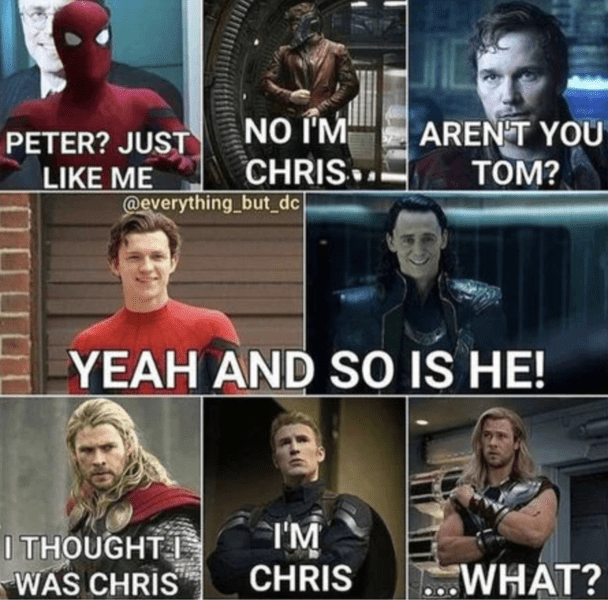 This Avengers: Infinity War meme shows the confusion amongst the characters due to their similar names. It’s a little silly but like all good memes, will have you chuckling along. 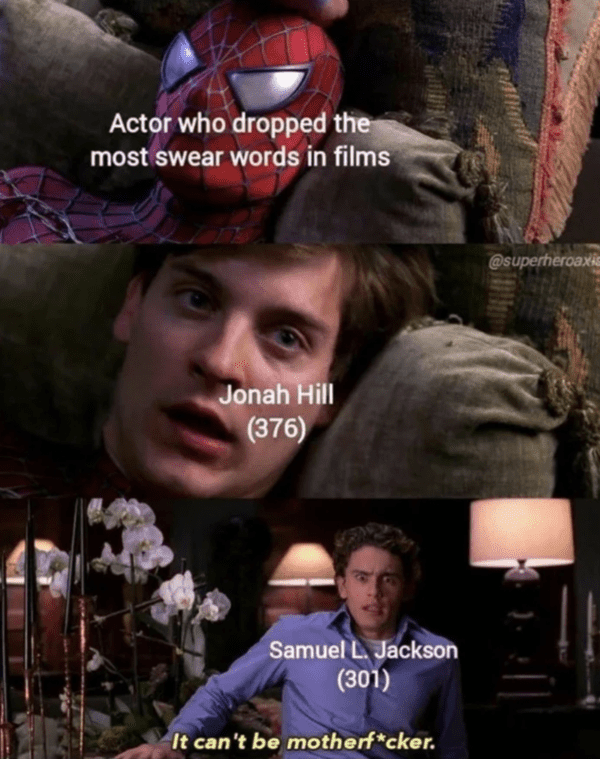 It surprised everyone who loves film when Jonah Hill was found to be the actor who has uttered the most swearwords. Nobody was more shocked than Samuel L. Jackson, who is known for his profanity. This meme sums up this situation perfectly using Spider-Man characters. 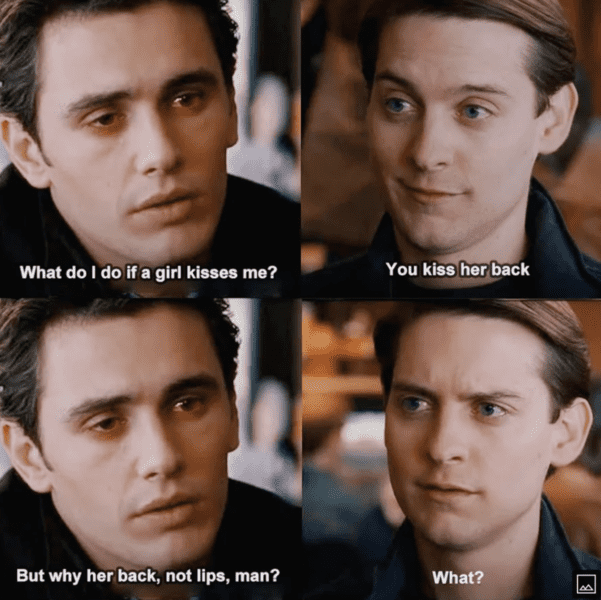 This meme is a classic dad joke that is sure to have you shaking your head.