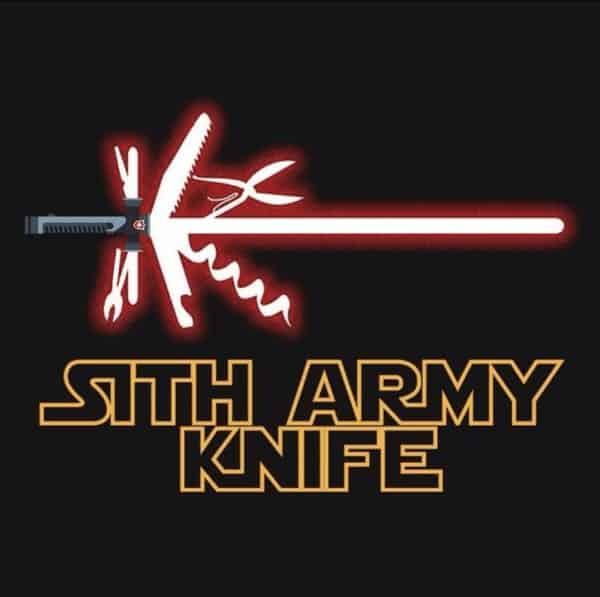 25 of the Funniest Star Wars Memes

Who doesn’t love Star Wars? The science-fiction franchise is one of the biggest and most widely enjoyed media properties in the world. Starting with the first film in the original trilogy, Star Wars: A New Hope, way back in 1977, the series has become a pop culture phenomenon. The prequel trilogy followed in the late 90s/early 00s before Disney purchased the rights to Star Wars from creator George Lucas in 2012, promising more films. They delivered in spades, with the sequel trilogy kicking off a new chapter in the Star Wars universe. Star Wars has also provided plenty of laughs with a plethora of Star Wars-themed memes dominating the internet over the past decade.

Many of these memes are taken from the movies, but there are many other properties that provide funny Star Wars memes. With TV shows, books, comics, video games, and other media fleshing out the property, there are plenty of great memes out there. Star Wars has become so successful that May the 4th is now known as May the Force, a day where Star Wars fans celebrate the iconic franchise. We want to do the same while also having a laugh, hence bringing you these hilarious Star Wars memes. 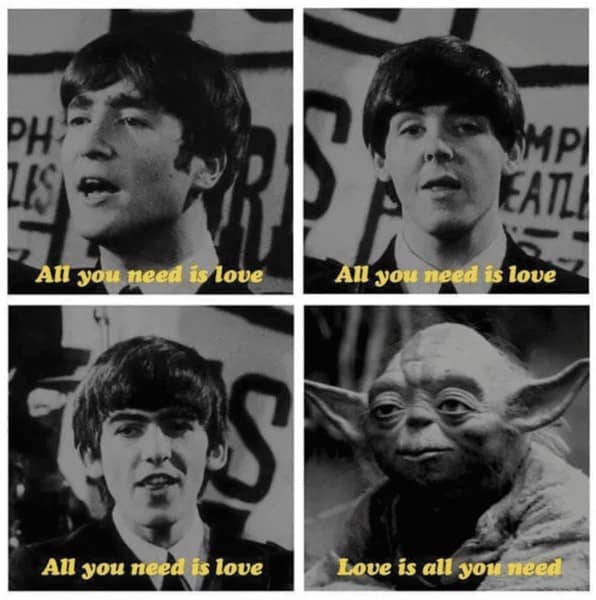 This is one funny Star Wars meme. Taking the classic song Love Is All You Need by the Beatles, this meme replaces Ringo Star with Yoda and has him singing the final stanza to the chorus. This fits in with the strange way Yoda speaks and is a great meme to kick off May the 4th.

2. Looking for Love in Alderaan Places 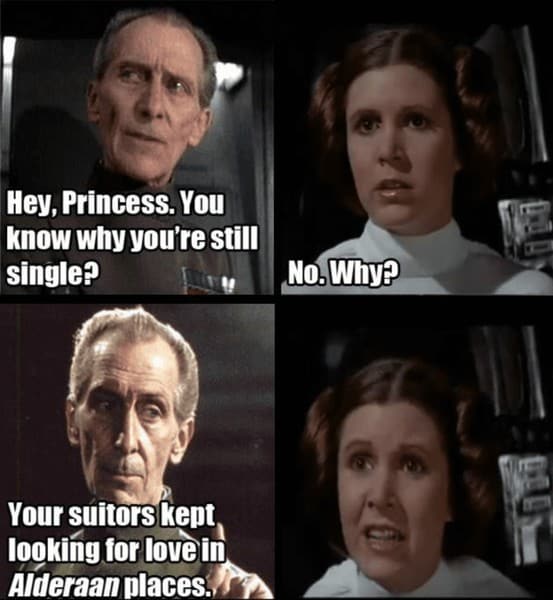 This is pure comedy cold and uses the destruction of Alderaan, the homeworld of Princess Liea, to illustrate her dating life. If you don’t find this funny you aren’t a real Star Wars fan.

3. The Many Moods of Padme Amidala 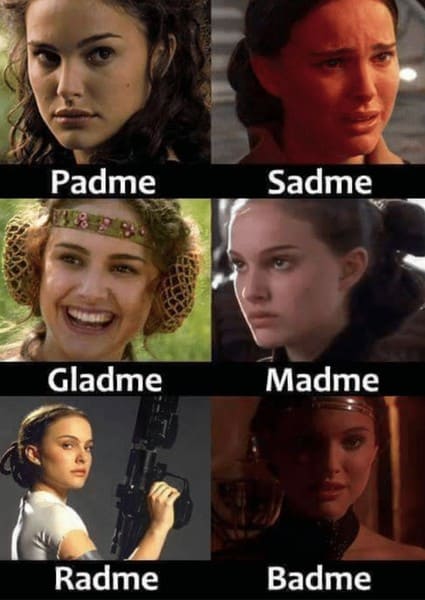 Natalie Portman is incredible as Padme Amidala in the prequel trilogy. Her introduction in The Phantom Menace only touches the surface of the type of character she is. This funny Star Wars meme expands on that and showcases all her moods in one.

4. Join the Dark Side of the Force 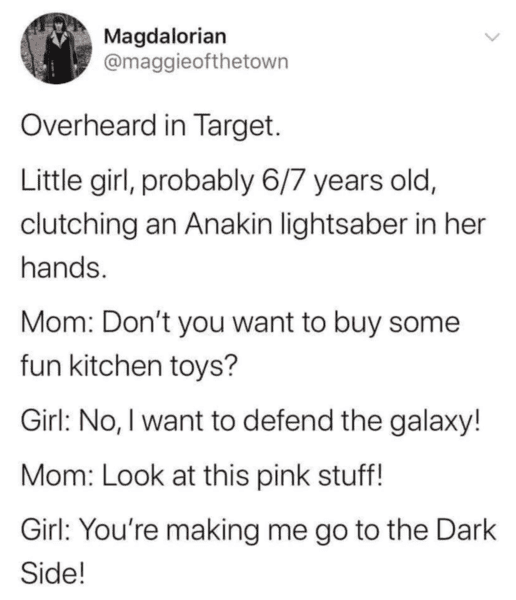 The last thing you want to do is drive your kid to the dark side of the Force like this mom. A solid Star Wars meme that also serves as a warning. 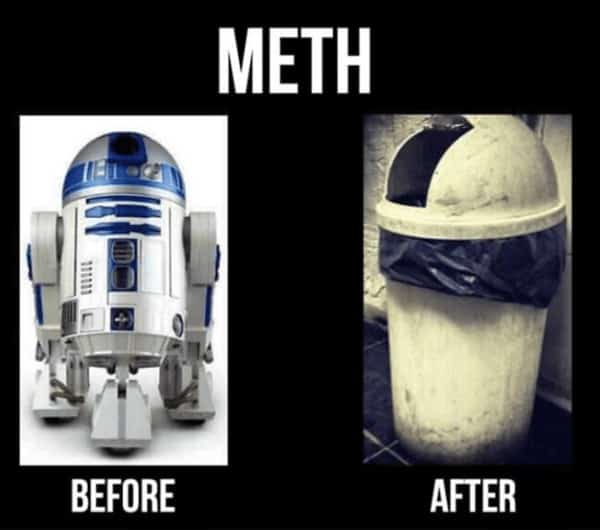 Here’s what R2-D2 looks like before taking meth and after. I feel a Star Wars/Breaking Bad crossover on the horizon. 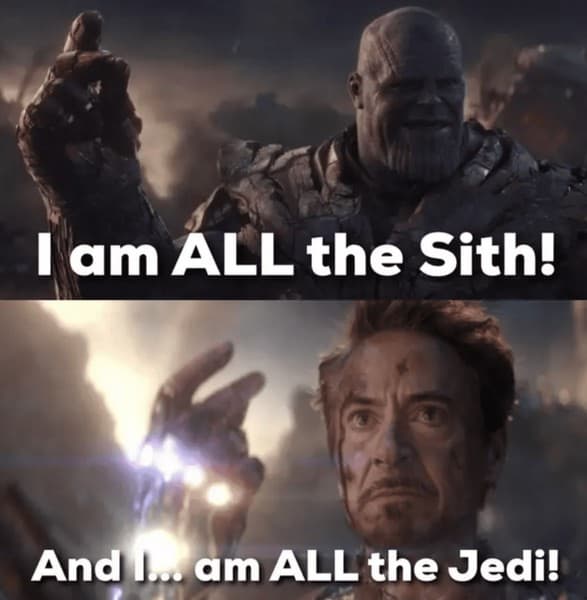 The Star Wars/Avengers crossover we didn’t know we needed. 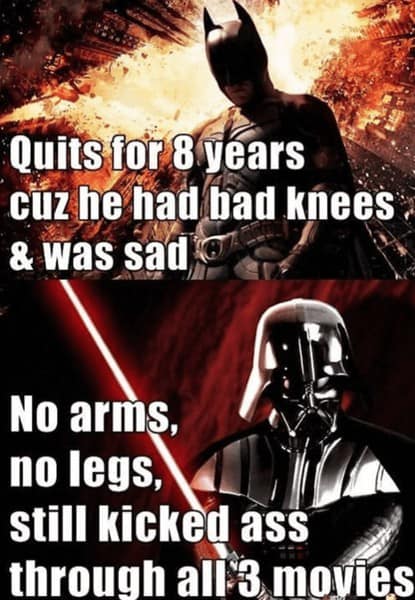 This funny meme points out the difference between the two dark-suited costume-wearing icons. If they ever got into a fight, our money is on Darth. 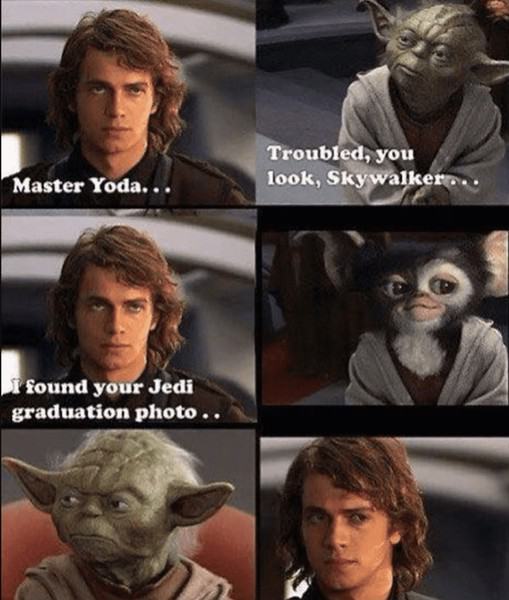 This clever meme references the mogwai Gizmo from Gremlins as Yoda during his high school days. 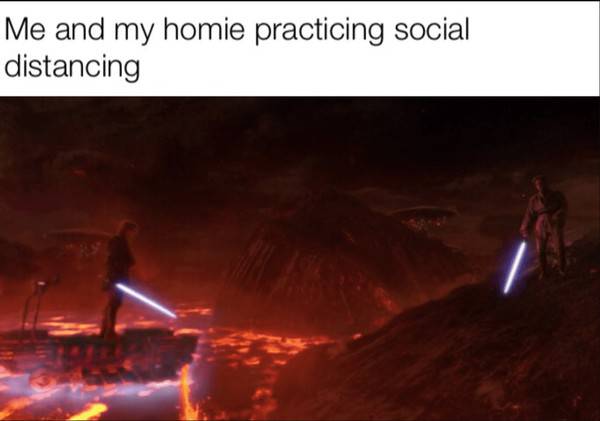 A great pandemic meme utilizing the famous lightsaber fight scene from Revenge of the Sith.

Who wouldn’t want one of these bad boys? 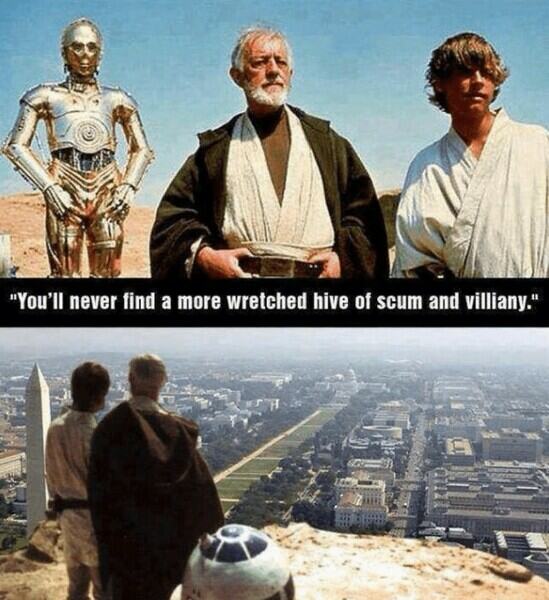 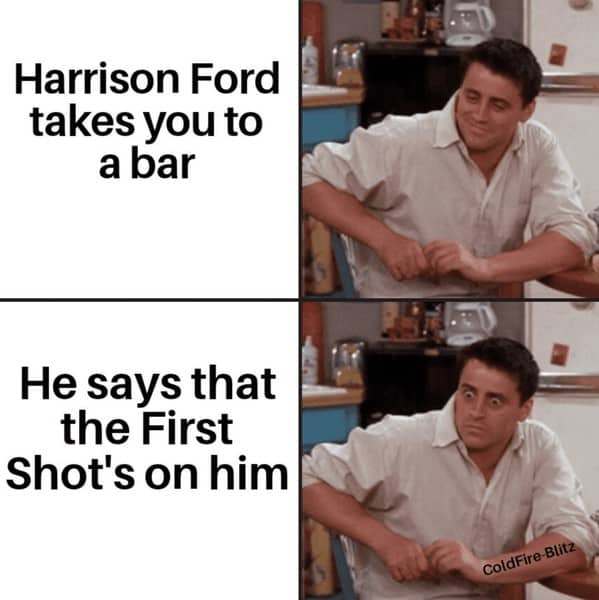 This is the type of reaction many of us Star Wars fans would have if Harrison Ford (Han Solo) hinted at shooting Greedo first. 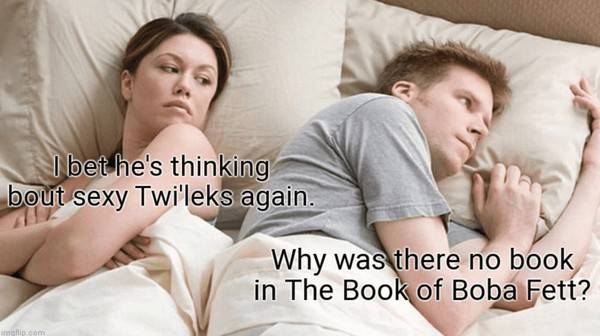 Taking the ‘I bet he’s thinking about the women meme’ and applying it to the Star Wars universe is genius. There are many iterations of this meme, but we think this is one of the funniest. Because, really, where is the book in The Book of Boba Fett? 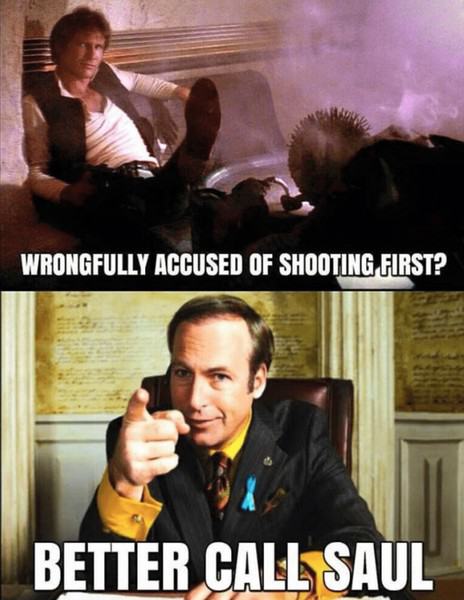 The only lawyer who can get Han Solo off.

15. The Show Is Supposed To Be About Me! 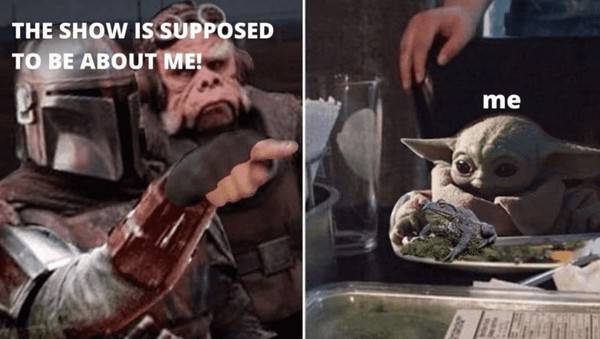 Another funny Star Wars meme that is inspired by a classic meme. In this case, it’s the ‘woman yelling at cat meme.’ 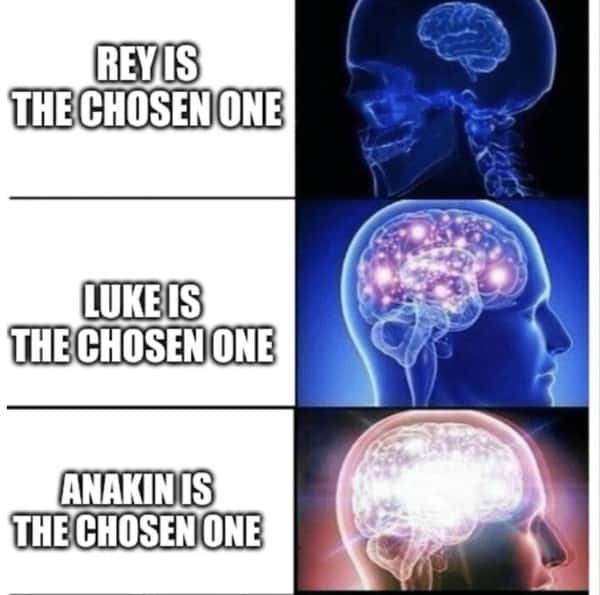 This meme references another famous meme (the ‘mind blown meme’) and will have you chuckling. 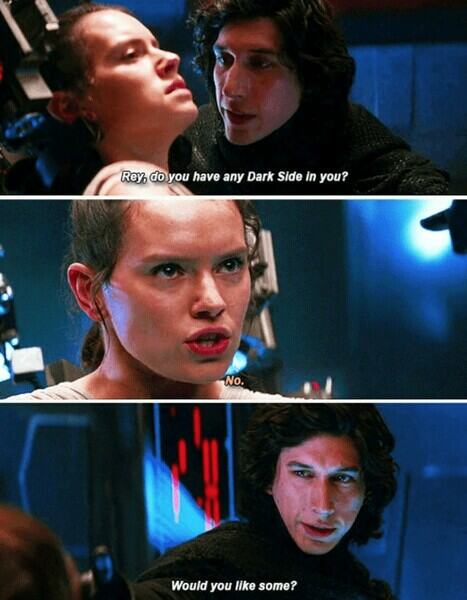 Who would have thought Kylo Ren would be so smooth? 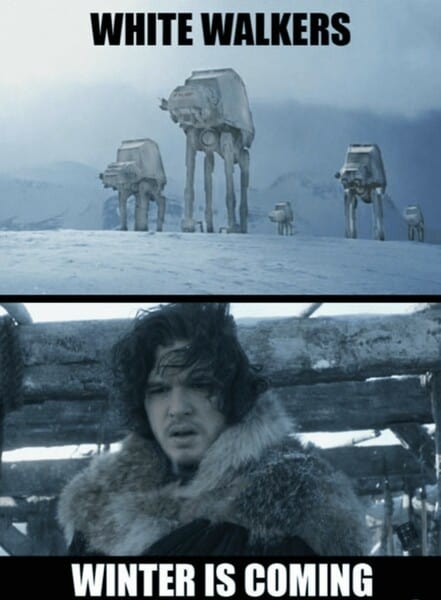 19. Who Hasn’t Killed Their Father in the Star Wars Universe? 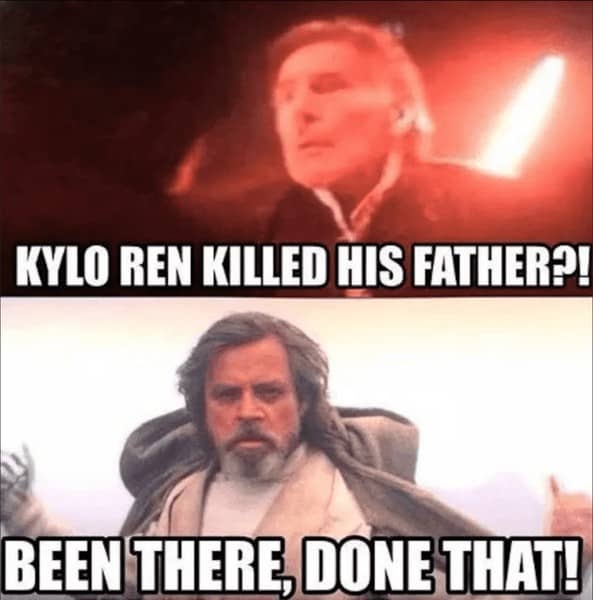 Anything Kylo Ren has done, Luke Skywalker has done better. 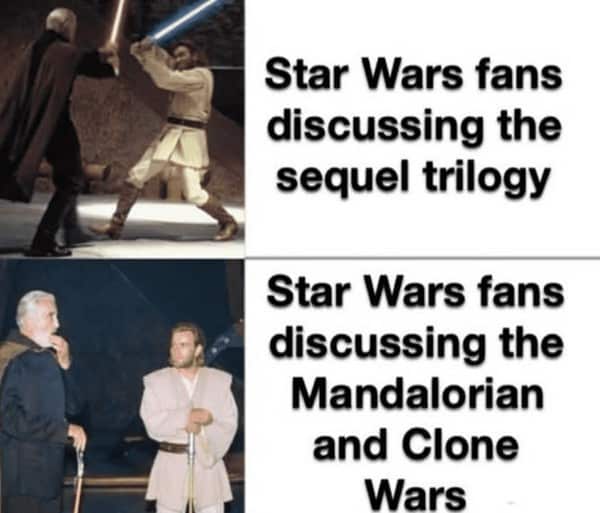 This meme perfectly sums up how Star Wars fans feel. 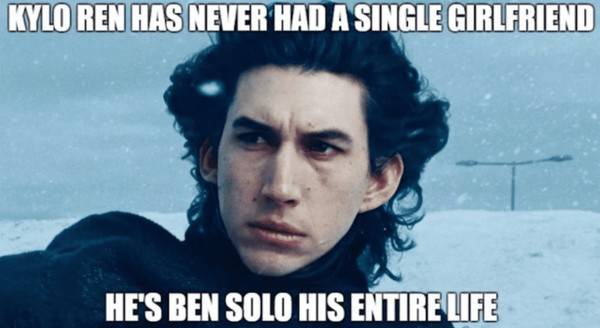 Who doesn’t love a good pun? This one explains why Kylo Ren has never had a girlfriend in his entire life. 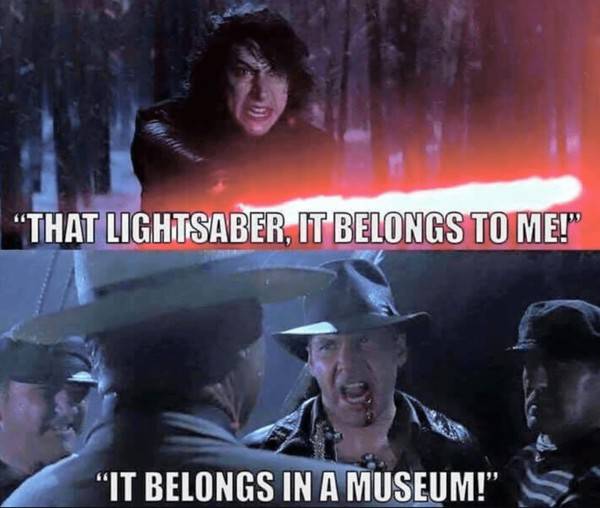 Here is a great Star Wars/Indian Jones crossover that will have Harrison Ford fans giggling. 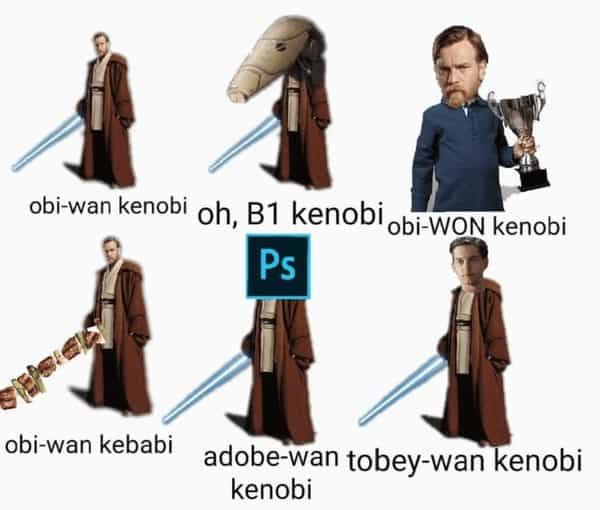 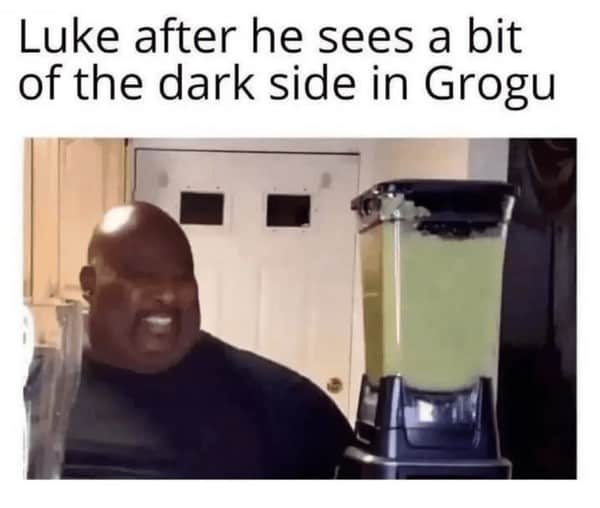 Thankfully this hasn’t happened. Yet.

25. You Turned Her Against Me! 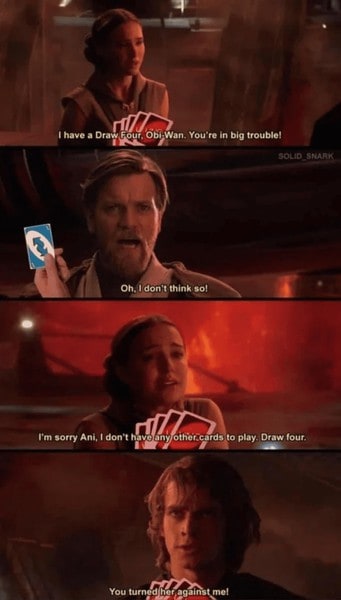 Who knew it was UNO that was the reason for Anakin Skywalker going to the dark side of the Force?