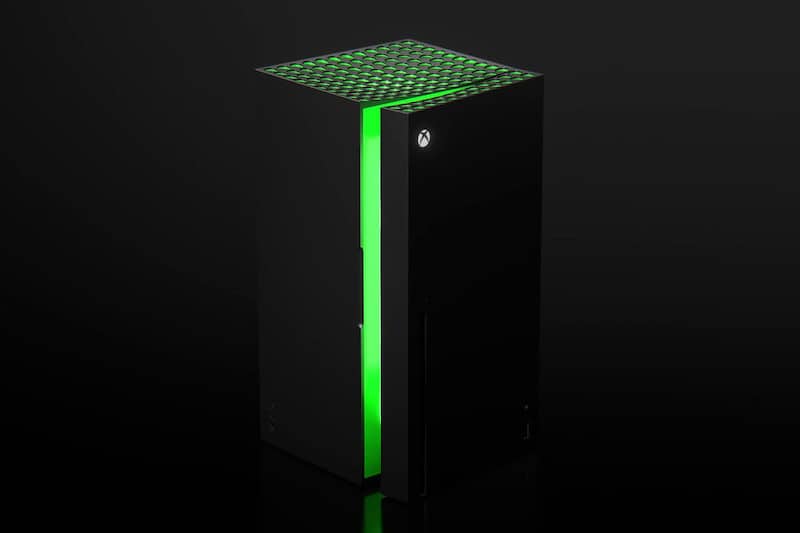 Updated 17/09/21: The much talked about Xbox Series X mini fridge can finally be pre-ordered. From October 19 you’ll be able to put your name down for one of these stylish fridges. Going for a cool $99.99 USD, the fridges can hold 10 cans and has areas for your snacks. There’s also a USB port to charge devices on the front and a DC power adapter to enable the mini fridge to work on the go. These mini fridges are expected to begin being shipped in early December. You can pre-order yours now exclusively through Target.

Teased earlier this year by Microsoft executive Aaron Greenberg, the Xbox Series X mini fridge is actually a thing. The fully functional appliance was revealed during a showcase at E3 over the weekend. A short trailer featured the sleek mini fridge, modeled after an Xbox Series X.

“For the first time ever in Xbox history, a new system that leaves others cold,” a voice-over states in the trailer.  The promo said that it was the “world’s most powerful mini fridge” and features “Xbox velocity cooling architecture.”

Last year Microsoft gifted rapper Snoop Dogg a full-size Xbox Series X fridge on his birthday. The first of its kind was also given away to one fan in a sweepstakes competition. “Complete with the latest next-gen cooling technology and inspired by one of the internet’s favorite console memes, the fridge is a 1:1 scale replica of the Xbox Series X, standing over 6 feet tall and weighing in at 400 pounds,” said a description on the Xbox website.

The fridge also includes an Xbox icon on the front that powers on and acts as a light for helping you find your snacks. The Xbox boot animation sound greets you when you open the fridge from the disc drive slot, with the inside glowing green, similar to the Xbox itself.

While there’s been no word on whether the mini fridge will be fitted out with the same features, we do know it will be available sometime in the holidays of 2021.