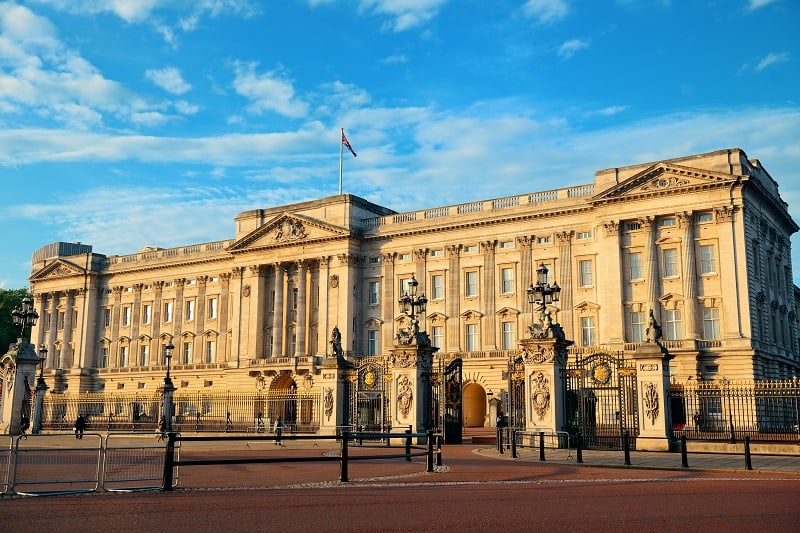 The 10 Most Expensive Homes in the World

Every little kid’s dream is to live in a massive castle, complete with unlimited candy, a giant waterslide, and a pet dragon. Once we get a little older, the dream morphs into more realistic but still ambitious standards. As teenagers, we dream of a mansion with a big pool where all our friends can hang out on the weekends or a cabin in the forest with a 10-car garage and a decked-out gaming room.

As adults, perhaps a sophisticated glass house on a cliff like Tony Stark suits you more. Maybe a celebrity’s former home in Hollywood where you can be neighbors with Sylvester Stallone.

While a castle or Beverly Hills mansion is but a pipe dream for us minimum wage plebs, the world’s elite has homes that are more extravagant than most of us can even imagine. Here’s a list of the 10 most expensive homes in the world. And yes, there’s an actual palace on it. 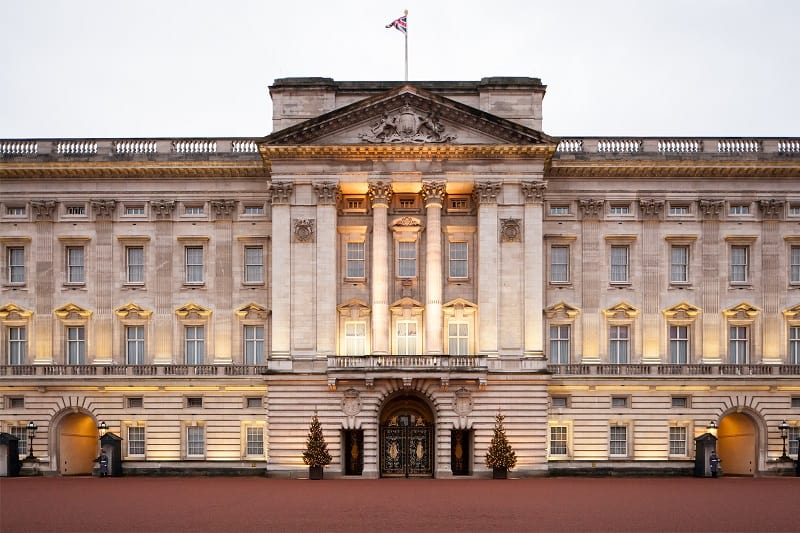 It should come as no surprise that the Queen of the United Kingdom’s residence is the most expensive home in the world. This massive estate is arguably the most famous palace today. The original townhouse was built in 1706 for the Duke of Buckingham. While it was always a home to members of the Royal Family, Buckingham Palace was not the official residence of a monarch until Queen Victoria ascended to the throne in 1837.

This palace has an unbelievable 775 rooms. 52 of these are Royal and guest bedrooms, 188 are staff bedrooms, 92 are offices, and 78 are bathrooms. There are also 19 staterooms to serve the Palace’s second function as the Queen’s administrative headquarters.

Buckingham Palace is as much a historical site and tourist destination as it is a residence. There’s a post office, movie theater, clinic, and police station all within the premises, which means it can sustain itself for most purposes. Valued at $2.9 billion, this estate is the most expensive home in the world. Unsurprisingly, it won’t be for sale anytime soon. 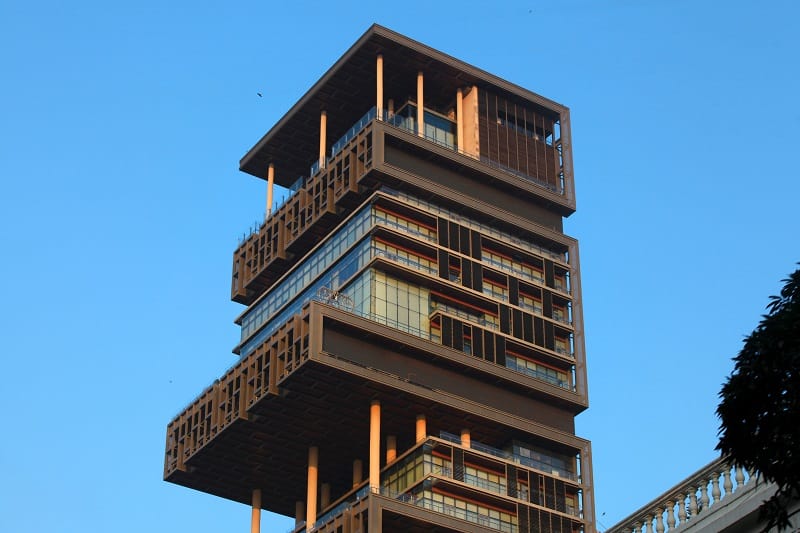 Situated in Billionaire’s Row at the heart of Mumbai, India, this lavish skyscraper is the home of Mukesh Ambani, the richest person in Asia.

Antilia is one of the largest residences in the world, featuring 27 stories, over 37,000 square meters of total area, and is even designed to withstand a magnitude eight earthquake. This towering mansion has all the extravagant amenities you can imagine a billionaire’s home has, including a massive 168-car garage, a full ballroom, a theatre for 50 guests, a swimming pool, a spa, a temple, a health center, and a terrace garden.

It’s also equipped with nine high-speed elevators and helipads with air traffic control. The Snow Room has actual snowflakes shooting out of the walls to simulate a snowy environment right in the middle of warm and humid Mumbai. The Antilia is valued at $1 billion with an undisclosed maintenance cost and one of the most impressive buildings on this list. 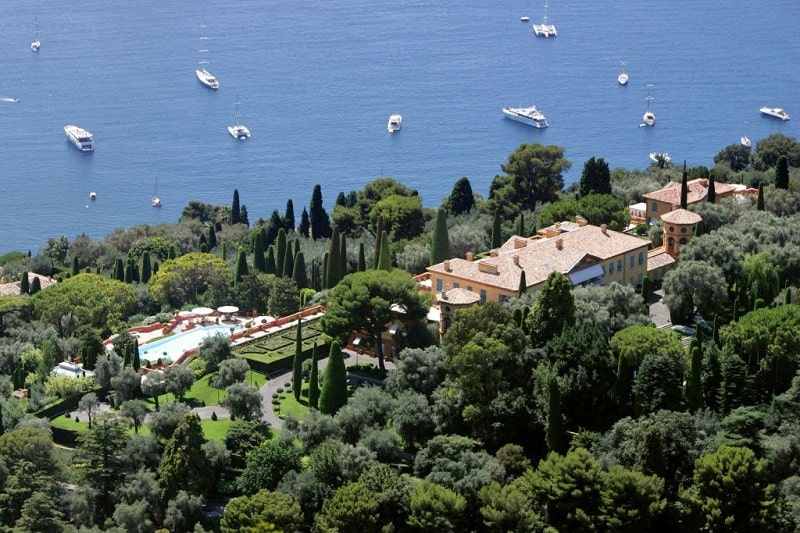 Villa La Leopolda is located in one of the most desirable places to live in Europe. This beautiful villa sits in a rich commune in the Alpes-Maritimes area on the French Riviera.

The current villa was built on an estate that was previously owned by King Leopold II of Belgium, hence its name. The previous estate was the King’s gift to his mistress and was eventually used as a military hospital in World War I after his death. In 1950 it was bought by Fiat and Ferrari owner Giovanni Agnelli and has changed ownership several times since.

Villa Leopolda is the third-largest home in the world, covering roughly eight hectares of land. This lavish abode includes 19 deluxe rooms – one of which measures 400 square meters – 14 bathrooms, a bowling alley, and a movie theater. On the outside, it has several sports courts and 12 pools.

Valued at just over $750 million, this waterside villa is one of the most expensive homes in the world and its architecture just exudes the royal aesthetic. 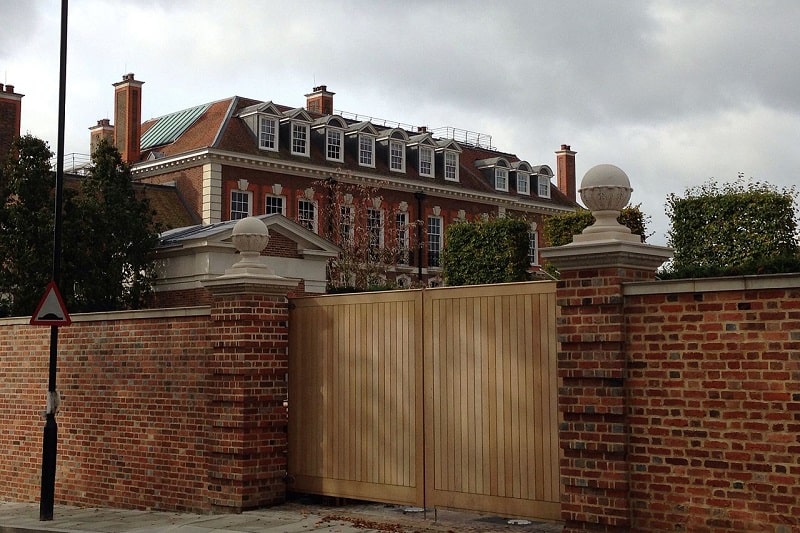 This expensive home in Highgate, London, is a protected site listed as Grade II by Historic England. While it’s smaller than the other properties on our list at only five acres, its long history of prominent owners gives it enough novelty.

The original house was built in 1774 and was called Parkfield. By the early 1900s, architect George Hubbard built a new structure on the estate for soap magnate Sir Arthur Crosfield. The estate was sold to a property developer in 1970 and was eventually repossessed by the banks.

This historic mansion has a total of 65 rooms including 25 bedrooms. It has a 70 foot ballroom complete with oak flooring and walnut wall panels. There is also a drawing room, study, entrance hall,  Chinese room, billiard room, and gallery.

The estate has been used as a filming location for movies and shows like The Lost Prince and Fame Academy. Its value is estimated at around $450 million. 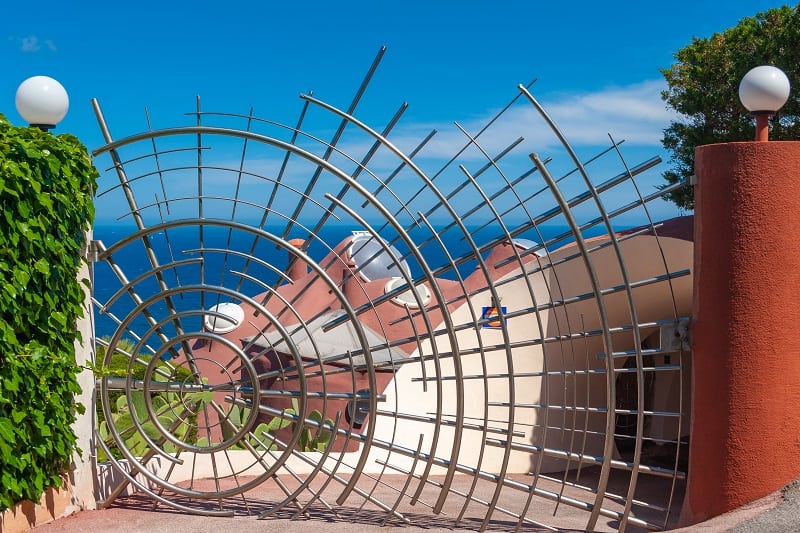 Les Palais Bulles translates to The Bubble Palace, and one look at this massive house will show you why. This home has arguably the most unique design on our list.

Located in Cannes, France, this coastal property was originally built by French industrialist Pierre Bernard and designed by Hungarian architect Antti Lovag. The architect hated straight lines and created the home’s bubble design as a “form of play –  spontaneous, joyful, full of surprise.”

This grand estate features 10 bedrooms, a panoramic lounge, reception hall, 500-seat open-air amphitheater, and several swimming pools and waterfalls all over the property. It has a total of 29 rooms and 11 bathrooms, most of which were designed by a different artist.

The home was purchased by famous French fashion designer Pierre Cardin in 1992 as a vacation home and art museum. After a five-year renovation project, the house was put up for sale with an asking price of €350 million. Not finding a buyer until Cardin’s death in December 2020, it has been suggested the estate be turned into an art expo venue in honor of the late designer’s patronage of the arts. 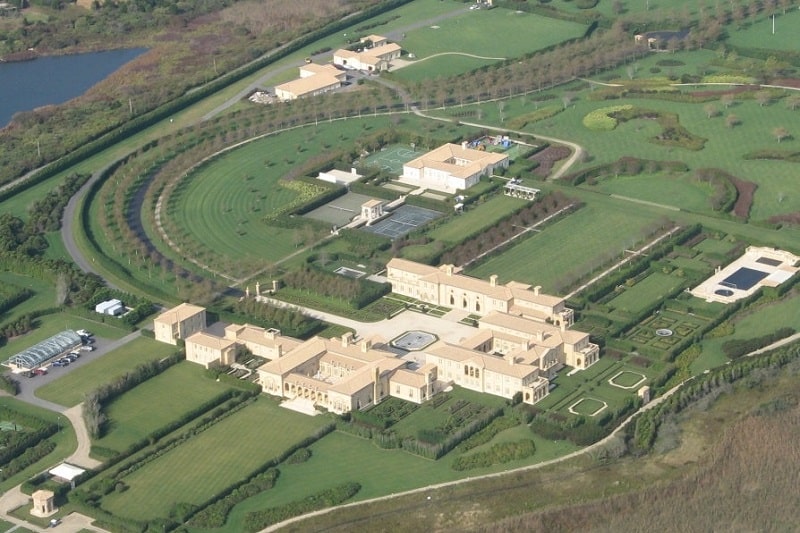 Owned by junk bond billionaire Ira Rennert, this mansion in the Hamptons is one of the most desirable homes in the United States. Rennert has a net worth of about $4 billion dollars.

This property spans 63 acres and includes 29 bedrooms, 39 bathrooms, a basketball court, a bowling alley, squash courts, tennis courts, three swimming pools, and a massive dining room that stretches 91 feet. The actual house itself covers about 1.5 acres of land, which makes it one of the largest houses in the country.

There are actually multiple houses on the property. A playhouse and two pool houses were also built near the main house. While most homes on our list have their own home theatres, Fair Field’s massive movie theater can seat 164 guests at a time. The garage is also incredibly large, able to house 100 cars.

This beachfront estate is valued at about $240 million, but many believe if put on the market in today’s current real estate climate could fetch upwards of $500 million. Even in an area like the Hamptons, where the richest of the rich love to own property, Fair Field stands out as one of the most extravagant homes. 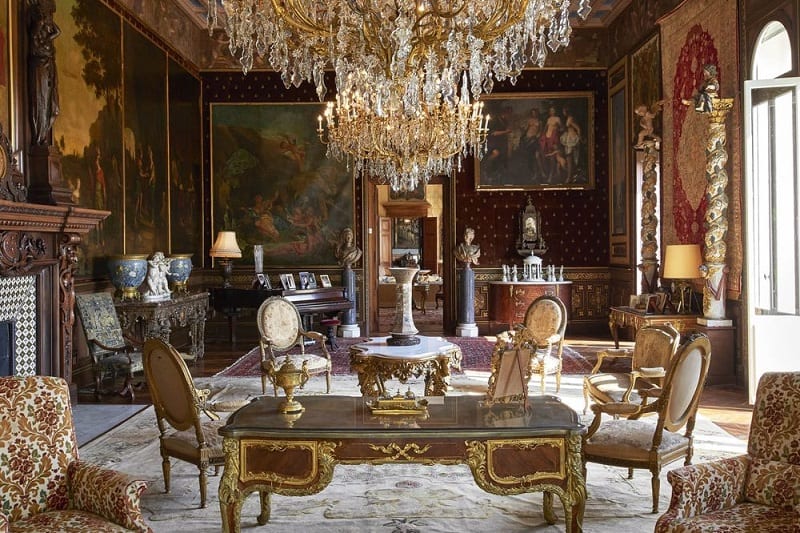 This expensive villa is located in the South of France, where the richest of the rich seem to love buying property. Many of the world’s wealthiest people have built or bought homes along this part of the Mediterranean.

Villa Les Cedres has 18,000 square feet of floor area within a 35 acre property in Saint-Jean-Cap-Ferrat on the French Riviera. This estate used to be an olive tree farm in the 1800s and still has olive trees that are more than 300 years old on its grounds today. King Leopold II of Belgium makes his encore on our list as the monarch purchased the property in 1904.

This mansion houses 14 bedrooms, grand sitting rooms, and a wood-paneled library that holds more than 3,000 books. It also has an Olympic-sized swimming pool, a large ballroom, stables, and an unrivaled view of the Mediterranean that’s deemed priceless in itself.

After King Leopold II, the estate was owned by the Marnier Lapostolle family up until the family’s company was sold to Italian beverage company Campari in 2016. Ukrainian billionaire Rinat Akhmetov bought it from Campari in 2019 for $221 million. 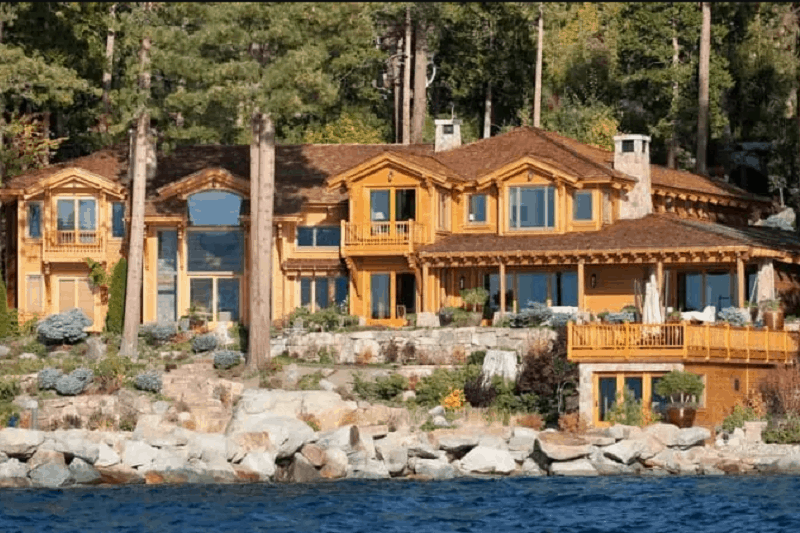 American investor and billionaire Larry Ellison is the 10th richest person in the world as of April 2021. With a net worth of $94.8 billion and being one of the world’s most avid real estate moguls, it comes as no surprise that Ellison also lives in one of the most expensive homes in existence.

This Woodside, California property is modeled after a 16th century Japanese emperor’s palace. It features several smaller-scale buildings including an 8,000 square foot main house, two guest cottages, a tea house, and a bathhouse. It also has a man-made lake and koi pond. The entire property covers around 23 acres.

More so, the estate was seismically retrofitted to withstand a magnitude 7.3 earthquake. While Ellison has since left California and moved to Hawaii in December 2020, the property remains one of his most prized and sought-after real estate gems. It is valued at about $200 million. 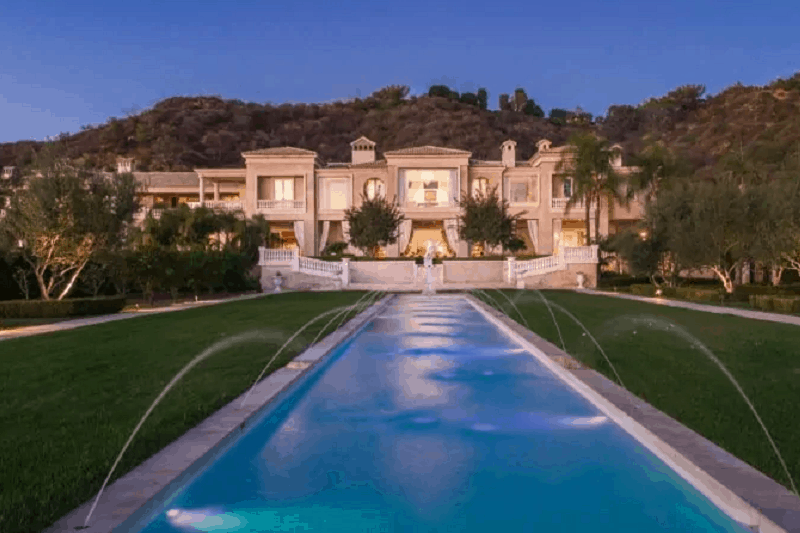 Beverly Hills, California is one of the most famous places in the world. This city is home to the biggest celebrities, most expensive luxury hotels, and the world-famous Rodeo Drive shopping district.

Palazzo di Amore is known as the most expensive residential complex in the United States. Real estate mogul Jeff Greene bought the property for $35 million and spent years developing it. In 2014, it was publicly listed with an asking price of $195 million.

This lavish estate is one of the most beautiful homes for entertaining guests of all types. It seems to have anything and everything that Hollywood celebrities would be interested in. In 2017, the property was relisted for sale at $129 million. 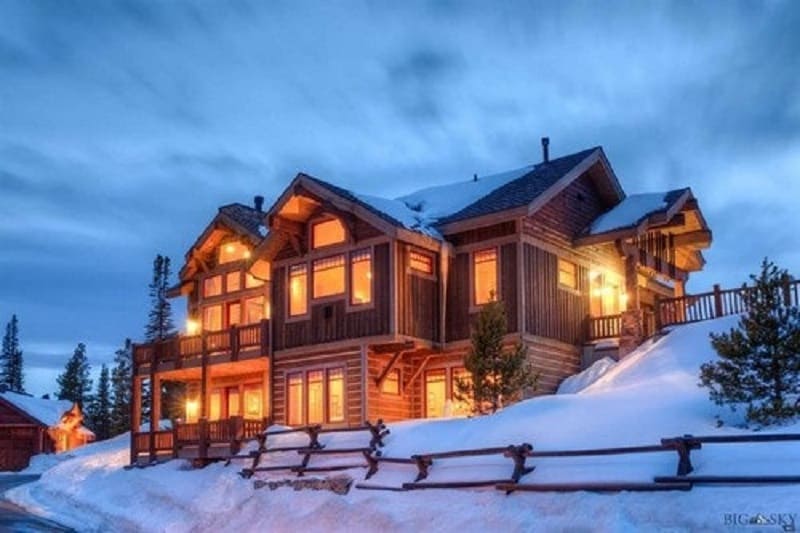 A property of the owners of Yellowstone Club in Big Sky, Montana, this is the largest house in the exclusive ski and golf resort. Yellowstone Club is one of the top destinations for the rich and famous during the winter ski season.

This estate covers about 57,000 square feet, featuring 123 rooms – of which only 10 are bedrooms – a spa, massage area, gym, and outdoor and indoor pools. The heated flooring and multiple fireplaces also make sure that its guests stay warm during the winter. Like most vacation homes by the elite, Seven The Pinnacle also has a stocked wine cellar. It even has a ski lift to the house, which no other home on our list can say.

Valued at around $150 million, this is more than just a glorified lodge in a ski resort. Seven The Pinnacle is easily one of the best winter holiday homes you’ll find anywhere in the world. Just a pity it’s not on Airbnb.

See more about - Grab this Beverly Hills Mansion for 1,000 Bitcoins