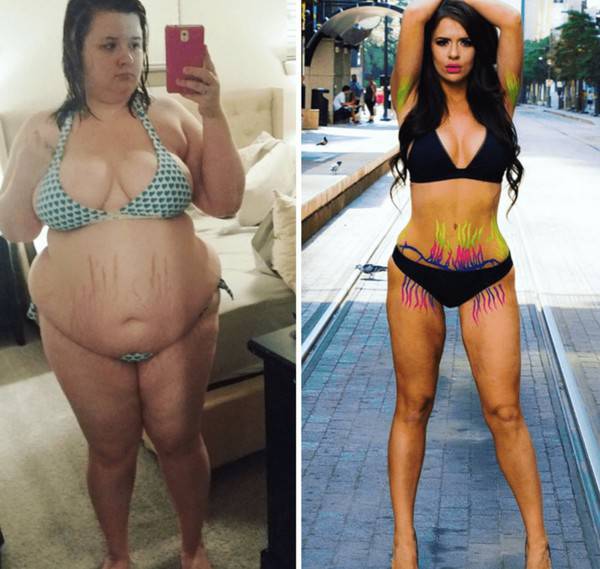 20 Incredible Before and After Weight Loss Pics

The struggle with weight is real. The last major obesity study carried about by the World Health Organization (WHO) in 2016 found that more than 1.9 billion people over the age of 18 were overweight. A jaw-dropping 650 million of these were considered obese. The number of obese people has tripled since 1975. Why are we getting fatter? There are two main reasons for this. The first is our consumption of foods chock full of artificial fats and sugars. The second has to do with fewer people being active. This is especially prevalent today with more and more people working sedentary jobs. We all know the dangers of obesity, but for some, this isn’t enough to change their habits. So we are here to inspire you with these incredible before and after weight loss pics.

Changing your diet and taking part in physical exercise can be hard to adjust to, but these photos prove it is possible. These brave people have shared their weight loss journey with the world. Although there is the threat of being ridiculed, they are willing to put up before and after weight loss pics to help others achieve their weight loss goals. These people’s stories will motivate you to lose weight and become the best version of yourself. 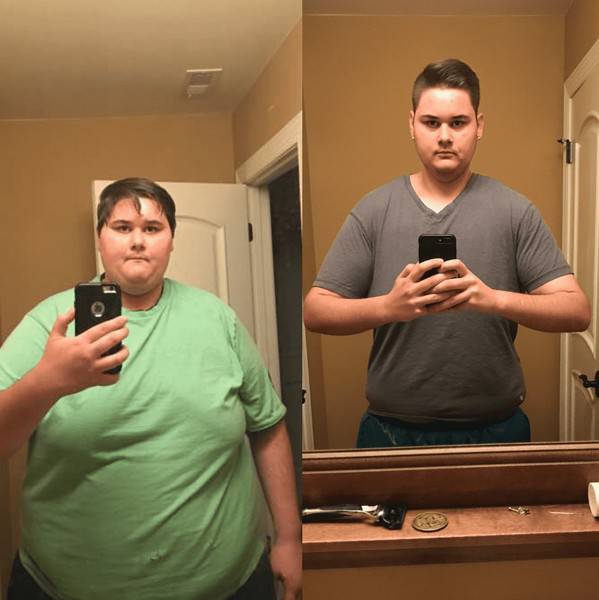 This fella by the name of smnelson did the business and lost an astonishing 170 pounds in one year. An incredible effort. He puts it down to diest and exercise. Instead of eating three meals a day and snacking throughout, he kept to a rigid structure of five meals a day and cut out sugar and gluten. He also exercised using a recumbent bike 45 minutes a day, six days a week. As you can see from the photos, this fella lost a heap of weight by slightly adjusting his habits. It only takes small changes to have a huge impact on your health. 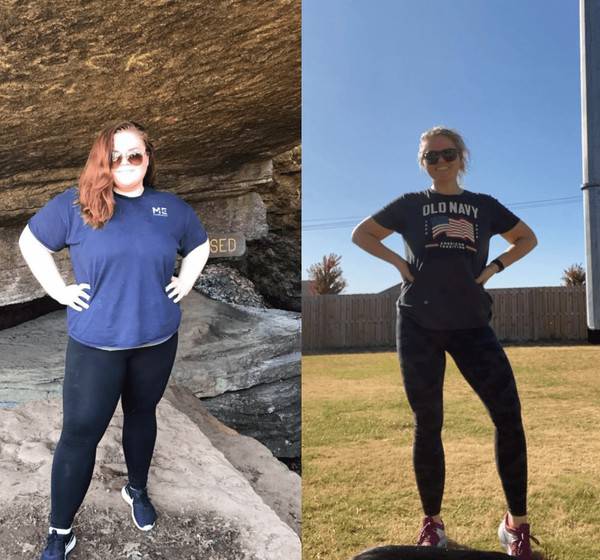 Jess has lost over 100 pounds on her weight loss journey. After going on a three-mile hike and taking three hours to complete it, she realized she need to do something to get healthy. She became a gym rat and fell in love with running, quickly shedding the pounds and feeling good in the process. 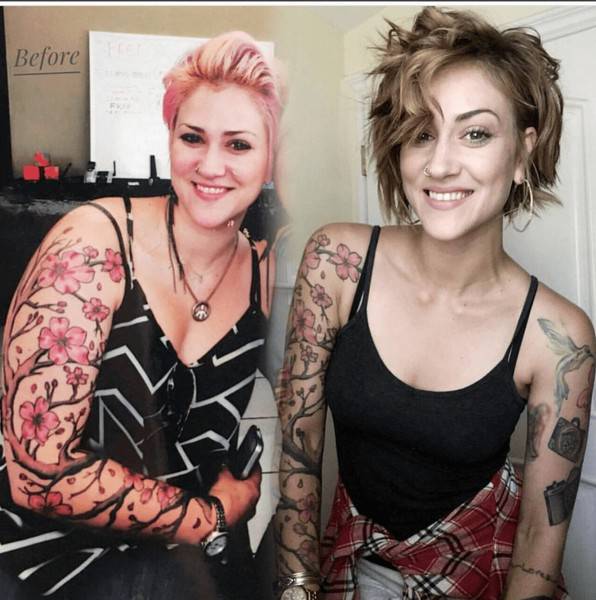 Not everyone has to lose over 100 pounds to post about their weight loss. The amount doesn’t matter. It’s the fact that you are changing your lifestyle to be more healthy and give you more of a chance to live longer. Rachel Ringwood moved to Miami and indulged in the lifestyle a little too much. After finding her weight blowing out and suffering from stomach issues, she discovered she was allergic to many food groups. Cutting these out (dairy, gluten, etc), quitting alcohol, and beginning to work out, she slowly started to lose body fat. As you can see from the photo above, she looks like a million bucks. 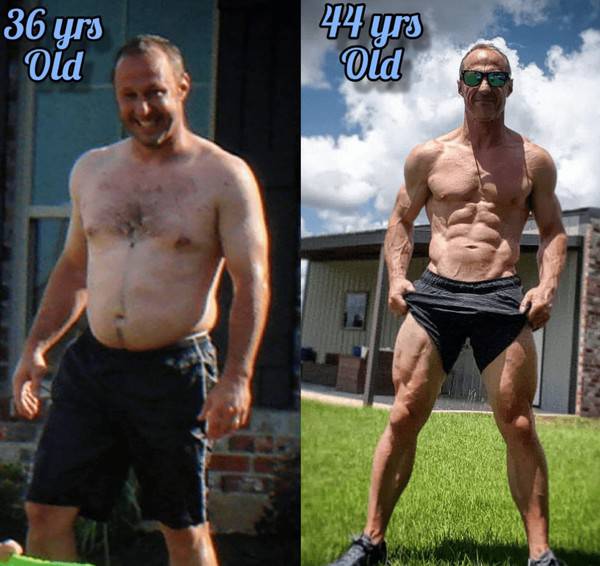 Nelson felt out of shape as he neared his 40s and decided to do something about it. He transformed from an overweight firefighter to a ripped beast. Nelson puts his weight loss down to a balanced diet (he sees a nutritionist) and his love of CrossFit. He trains regularly and even competes in competitions, coming 158th in the world in 2018. 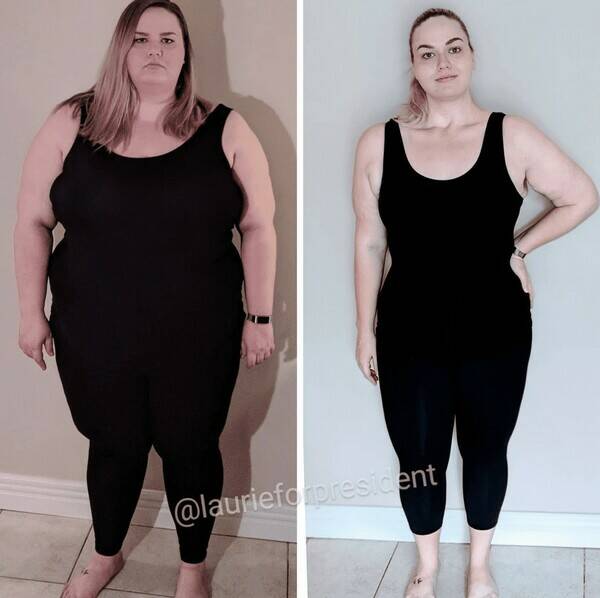 There are many different types of ways you can lose weight. Laurie uses a calorie in, calorie out method. This is where you count the calories you are consuming and burning to keep things at an even keel. She also does a fair bit of exercise. Laurie has lost 200 pounds, which as she puts it, is like “carrying around a refrigerator with you everywhere.” As well as losing weight naturally, she is looking at having weight loss plastic surgery to help her with her body confidence. She has done a remarkable job and will no doubt hit her goals over the coming months. 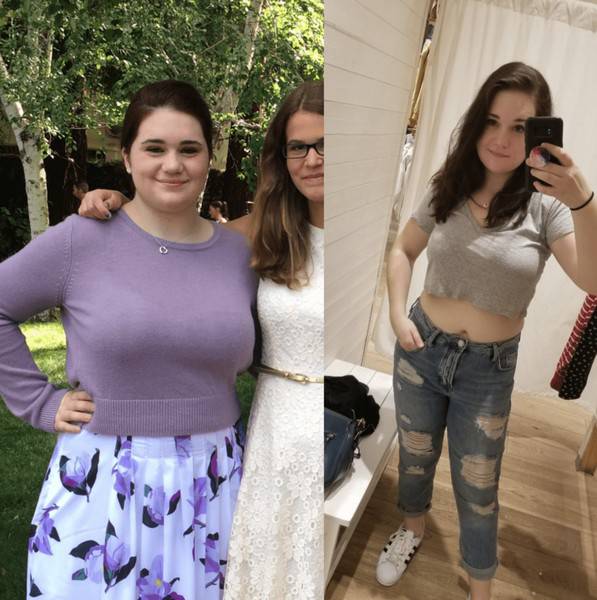 This young woman has lost 45 pounds overall. 35 of those were thanks to the keto diet. For those unfamiliar, the ketogenic diet is all about low carbs and high fat. The aim is to cut back on carbohydrates like sugar, soda, bread, etc., and get your calories from protein. People who try this have to adhere to a strict diet that can be challenging, but as you can see, the reward is worth it. 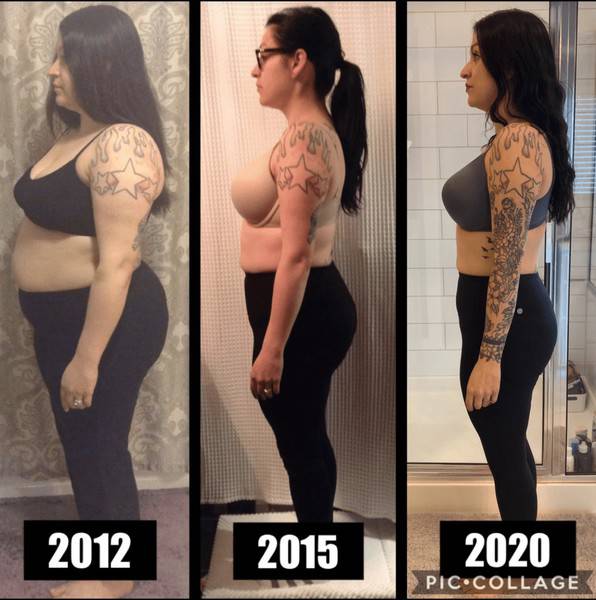 Losing weight isn’t a race. Your weight loss transformation can take years before you achieve the look you want. You have to keep a positive mindset and be prepared to put in the work. JustTakingANap detailed her weight loss story which includes having two kids (she has four all up). As she says in the caption accompanying the photo, “There’s no wonder drug, it’s fucking hard work. If you’re struggling and want someone to rant to, vent to, or lean on – feel free to write me.”

This is the type of encouragement many need when trying to hit their goal weight. Talking with others and sharing your experiences certainly helps boost your confidence.

8. Losing Weight Turned Into a Career in Fitness 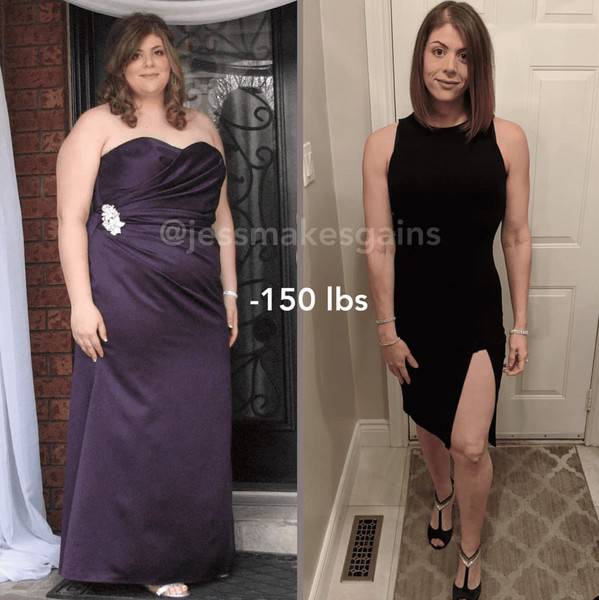 For some, losing weight turns into a fitness career, as is the case with Jessica. Having been overweight for the majority of her life, when she turned 24 she finally decided to do something about it. She lost over 150 pounds through a combination of healthy eating, strength training, and working out. This led to her passion for fitness which she now gets to share with others as a personal trainer.

9. Losing 175 Pounds and Learning To Love Your Stretch Marks

Christine Evans is a weight loss coach who is using her story of weight loss to help and inspire others. She lost a massive 175 pounds, and as you can see, looks stunning. As is the case with many people who lose that much weight, Christine found herself with stretch marks. Instead of trying to hide them, she embraced this part of her body, even going as far as enhancing them in the photo above. What a weight loss star.

10. Dropping the Pounds and Joining the Army 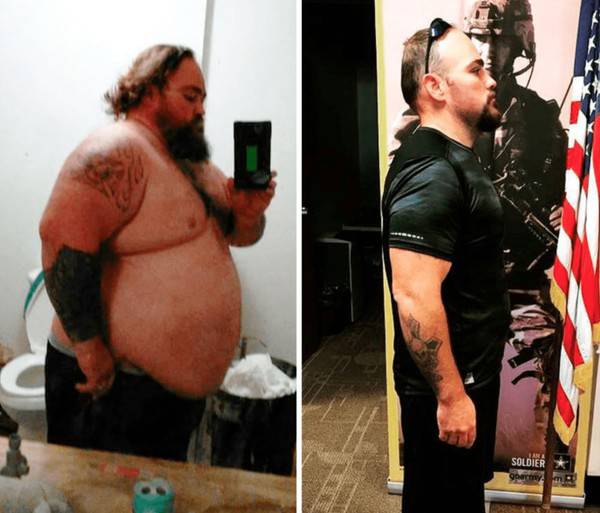 William Guinn had a dream to join the army but his weight meant that was never going to happen. Finally deciding enough is enough, he went about getting lean and fit. He lost a whopping 230 pounds through a combination of hard physical work and dieting. The best part about this story is Guinn was successful in his attempt to join the army. Not only that, but he also met the woman of his dreams who he went on to marry. 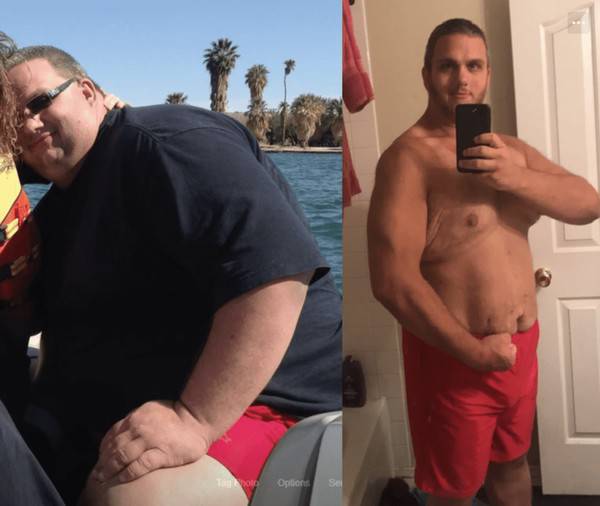 Tim Lighthart’s life-changing moment came when he almost missed the birth of his daughter. As detailed in Men’s Health, Lighthart almost couldn’t fit into the scrubs he need to wear to watch his daughter being born. Realizing the impact his weight was having, Lighthart decided to make some drastic changes. First, he had gastric sleeve surgery, restricting the amount of food his stomach could hold. While successful at first (he dropped 100 pounds quickly), he soon put 50 pounds back on. He began the keto diet and an exercise plan with a trainer that included lots of strength training. While yet to hit his ideal weight, Lighthart is out there getting it done (he’s lost 200 pounds) and is an inspiration to all. 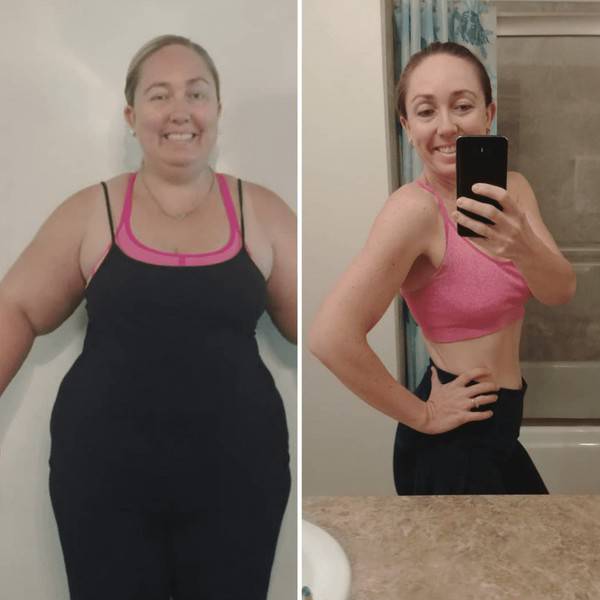 After struggling to lose weight for five years, Peggy knew she had to take drastic measures. Through a combination of early morning HIIT classes and counting her calories, this determined woman managed to drop 160 pounds in 12 months. An incredible effort. She continues to share her journey on Instagram. 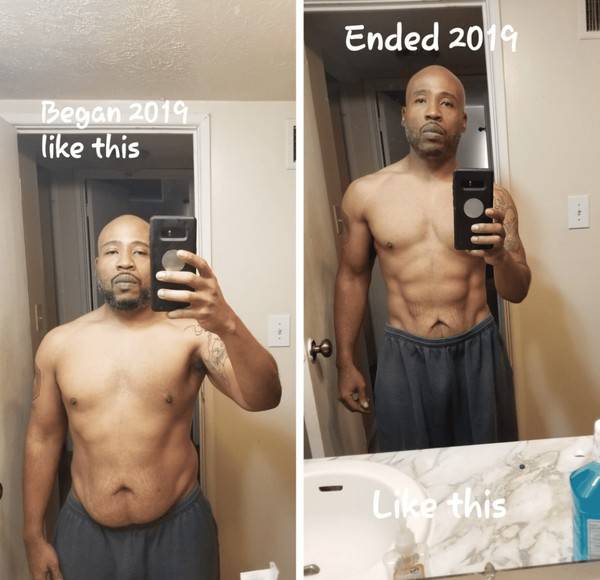 After his relationship ended, Giancarlo Babatunde decided to work on himself, in particular his body. Wanting to get healthier, Babatunde embarked on a fitness journey that has seen him get into the best shape of his life. He works out five times a day, alternating between strength training and cardio. He also eats much better and tries to stick to a diet of chicken, fruits, and vegetables. Babatunde is also all about how being healthy makes you feel: “It’s great to look great, but the satisfaction of accomplishing things you didn’t think you could is just as much, if not more, of a payoff.” True that.

14. Couples That Diet Together, Stay Together 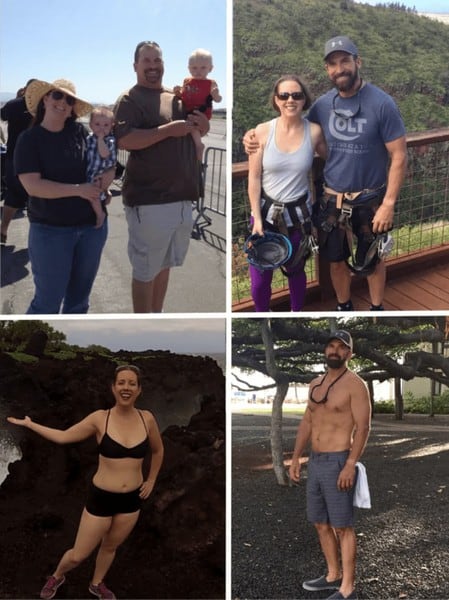 Losing excess weight is much easier when you have someone in your corner. That’s why so many couples lose weight together. It is much easier to achieve your weight loss goal. This couple in their 50s did just that through eating better and exercising. They stopped eating junk food, followed a low carb high protein diet, and worked out regularly, helping lead to their weight loss transformation. It took the couple 18 months to get to where they are, but the results are spectacular. 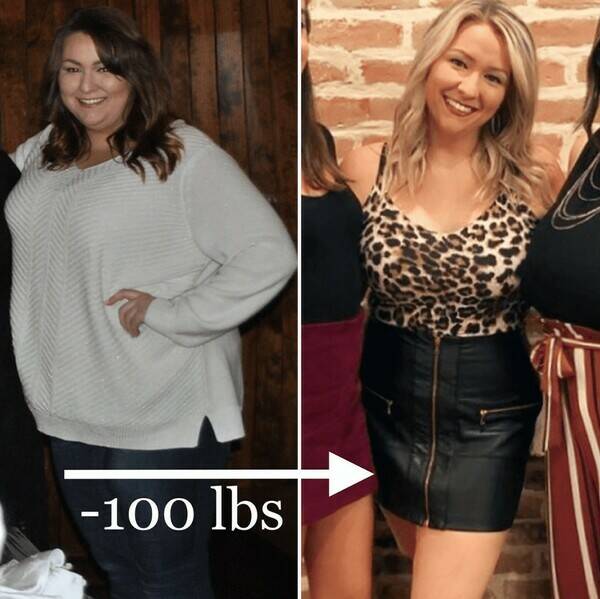 Through a combination of the keto diet and running, Keto Allie has managed to lose over 100 pounds. The Orange County native uses her Instagram account to track her health and fitness adventure. She often posts throwback pictures along with the healthy food she cooks to help her look so good. 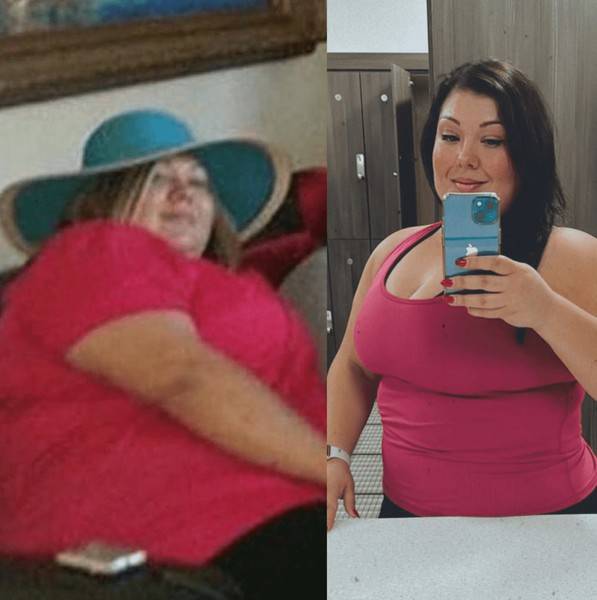 After recovering from a binge eating disorder, Debbie decided to embark on her own fitness journey. Her mission is to lose 100 pounds, and she is well on her way. She has lost over 80 pounds since taking part in Weight Watchers and is a regular at the gym. Like many people who are proud of what they are achieving with their weight loss, Debbie posts updates on her Instagram account.

17. From Big To Skinny To Ripped 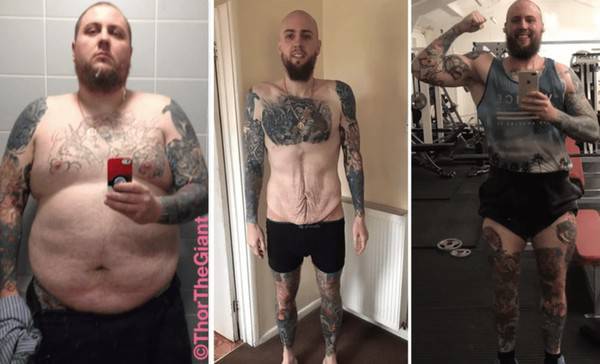 This gent has been on a weight loss roller coaster. After originally weighing 392 pounds, he dropped down to 195 pounds before going back up to 256 pounds. But he didn’t put weight on in a negative way. He bulked up to put on muscle. He followed the keto diet, along with lots of weight training, to achieve his look. 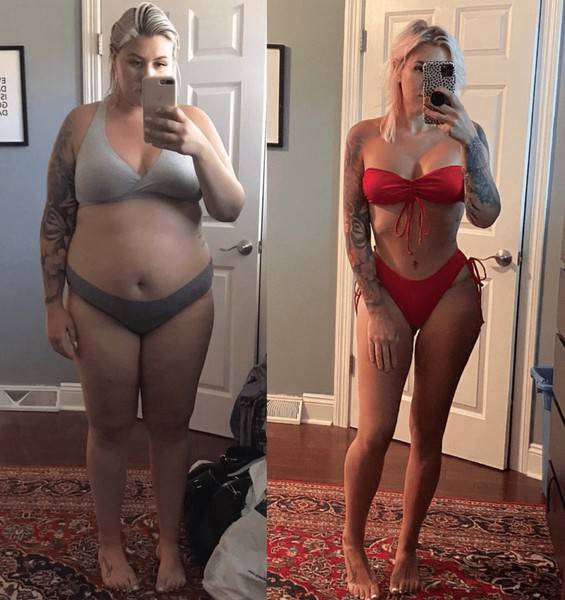 Ali lost a huge amount of weight over her two year journey. 135 pounds to be exact. She achieved her weight loss goals through hard work. She spent many hours in the gym and followed the keto diet while also fasting intermittently. While she has admitted to having a tummy tuck and boob job, you can’t begrudge the effort she has put in to lose all the weight. 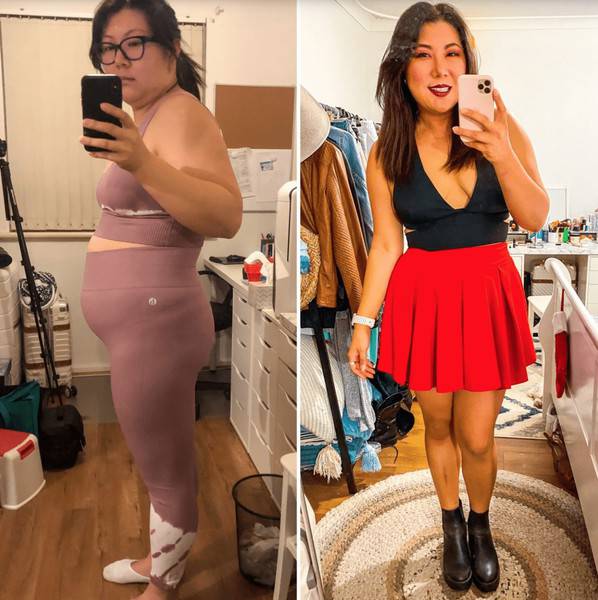 After ending a ten-year relationship and losing her pet dog of nine years, you wouldn’t begrudge lastsilverdollar from putting on the weight. But instead of getting depressed and wallowing in self-pity, she hit the gym regularly and managed to drop 14 pounds. While this might not sound like a lot when compared to other people on this list. weight loss, no matter how big or small is worth getting excited about. 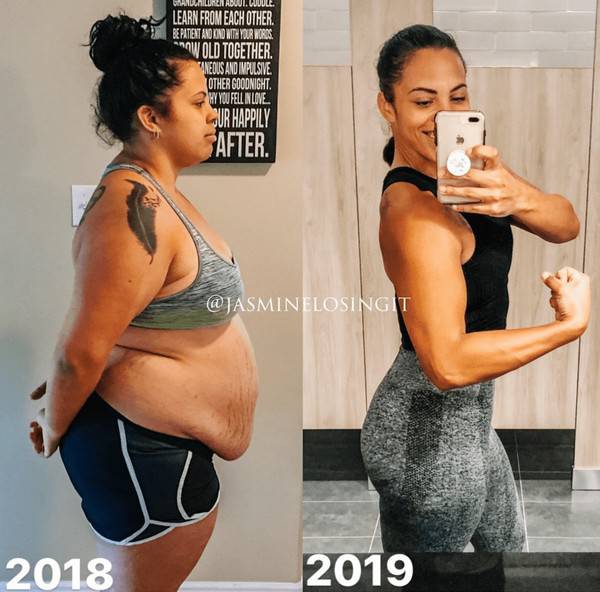 Jasmine wasn’t happy with her body or the way she looked and took things into her own hands. Following celebrity trainer Jillian Michaels’ workouts and starting the 21-Day Meal Plan, Jasmine managed to lose a massive 120 pounds. Not only has she lost an incredible amount of weight, but Jasmine is now a coach who helps other people hit their fitness dreams.