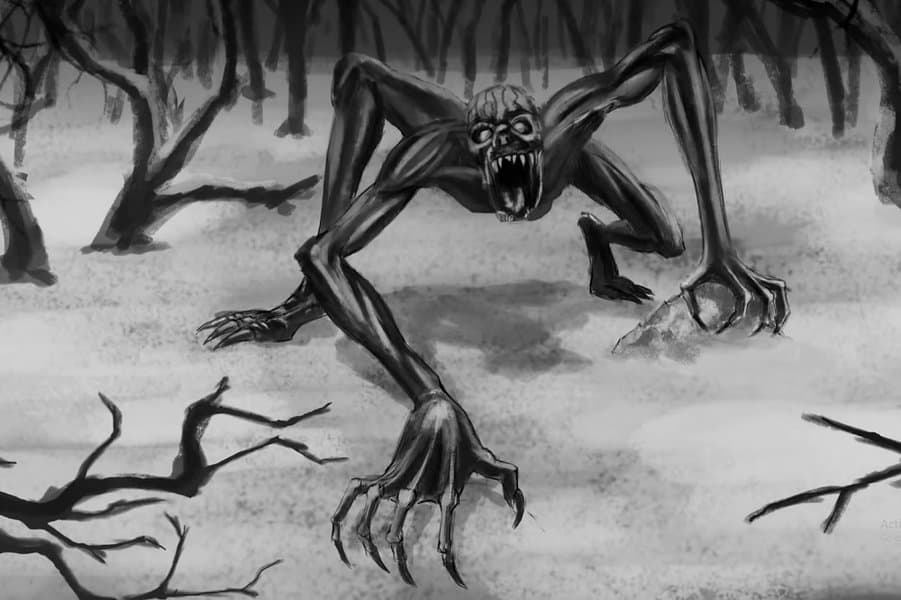 17 Scary Mythical Creatures To Give You the Heebie Heebies

A cold chill fills the air. Beyond the trees, a shadowy figure moves in the darkness. The intense fear paralyzes the body as the figure moves closer and slowly becomes a monstrous creature.

Tall tales of scary mythical creatures date back centuries. These wicked fear-inducing monsters cause nightmares in every part of the world. For instance, in South America, there are terrifying stories about evil demons that kidnap children. In Asia, giant spiders hunt men and phantom whales curse villages. In North America, there are sightings of supernatural creatures in New Jersey and beasts in Wisconsin. Greek mythology features hybrid creatures with a snake’s head for a tail. Mythical monsters that cause nightmares run rampant in Norse mythology.

The point of many urban legends is to scare kids and caution them about wandering off into the darkness. However, some of these tales are so scary even adults are hiding under the covers. Perhaps that odd sound is just the house settling and the cold chill is because a window was left open. Maybe the story about those frightening mythical creatures is just a story to scare kids, or perhaps a scary mythical creature is standing behind you as you read this?

17 Scary Mythical Creatures To Give You the Heebie Heebies 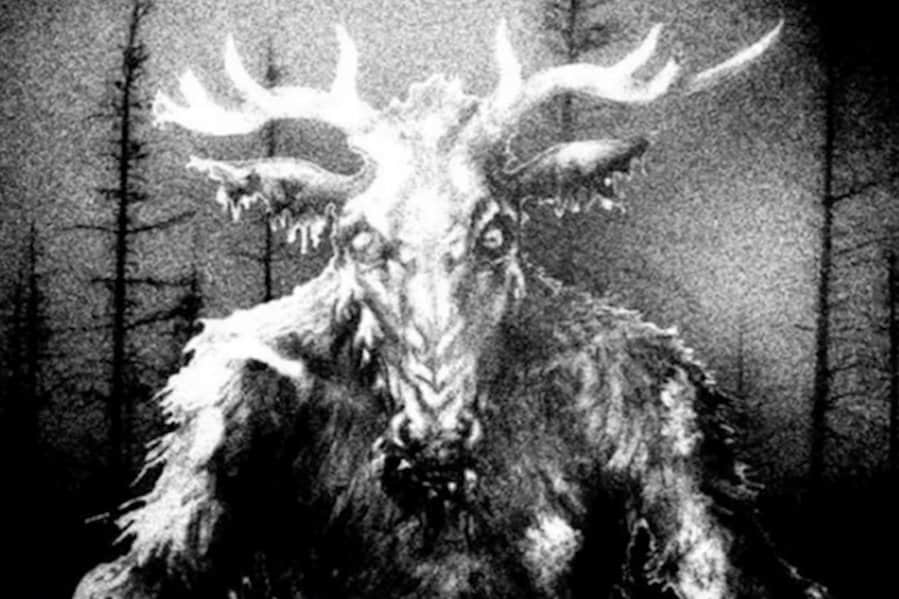 The spine-chilling Wendigo strikes fear into the hearts of its victims. It appears mainly in the winter and loves the North. The monster terrorized the Algonquin, Ojibwe, Cree, Saulteaux, Innus, and Europeans along the Great Lakes, the East Coast forests of Canada, and the Great Plains in the United States.

The myth of Wendigo or Windigo exists in several First Nations and Native American cultures. Therefore, the description varies depending on the region. In some cultures, the terrifying creature has grayish skin that’s so tight its bones stick out. Others believe it’s a giant cannibal that possesses humans. 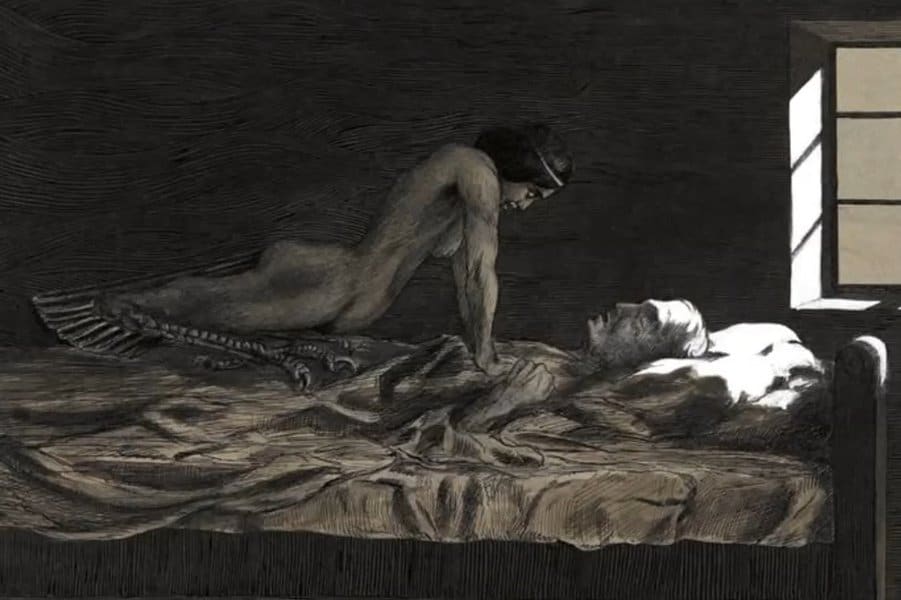 There truly isn’t anything worse than a horrible bad dream in the middle of the night. Some people think scary movies or eating late at night cause bad dreams. According to Norse mythology, the evil creature The Mare is responsible for causing those terrifying nightmares.

Indeed, the word “nightmare” comes from the panic-inducing creature. The evil demon causes nightmares by sitting on a person’s chest in the middle of the night. Now, that’s a nightmare. The Mare is one of Norse mythology’s scariest creatures. 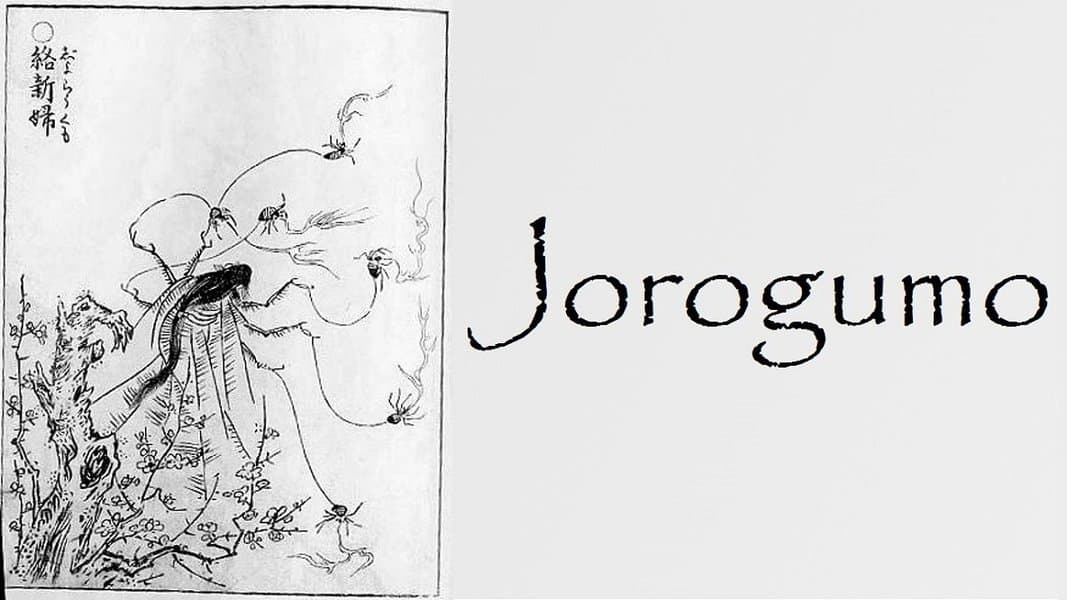 In Japanese folklore, there’s a mythical creature so terrifying that it makes Godzilla run in the opposite direction. Indeed, Jorogumo is one of the scariest mythical creatures and certainly will crawl into a few nightmares tonight.

According to legend, the supernatural creature, Jorogumo, is a 400-year-old giant spider that loves to devour young men. Of course, it takes some trickery to get these men into her web. Therefore, the demon transforms into a beautiful young woman to seduce her unsuspecting victims before eating them. 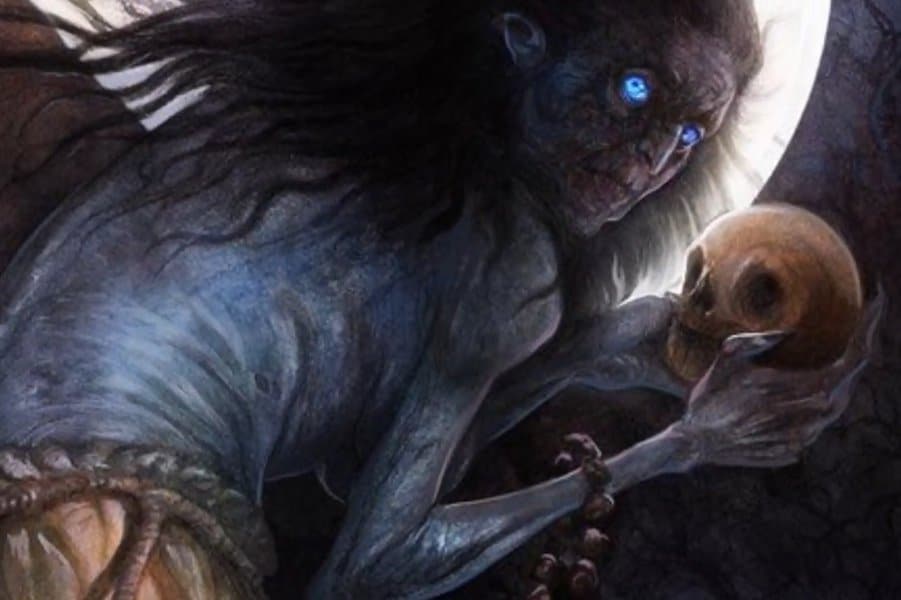 The evil creature known as Black Annis is the heart-stopping demon that haunts little kids’ nightmares. In English folklore, Black Annis is a wicked witch with iron claws and a spine-chilling blue face.

According to myth, the monster hunts children in the countryside of England and brings them back to her cave in the hills. Black Annis loves the taste of human flesh, especially if it’s a child. Black Annis is easily one of the scariest mythical creatures in history. 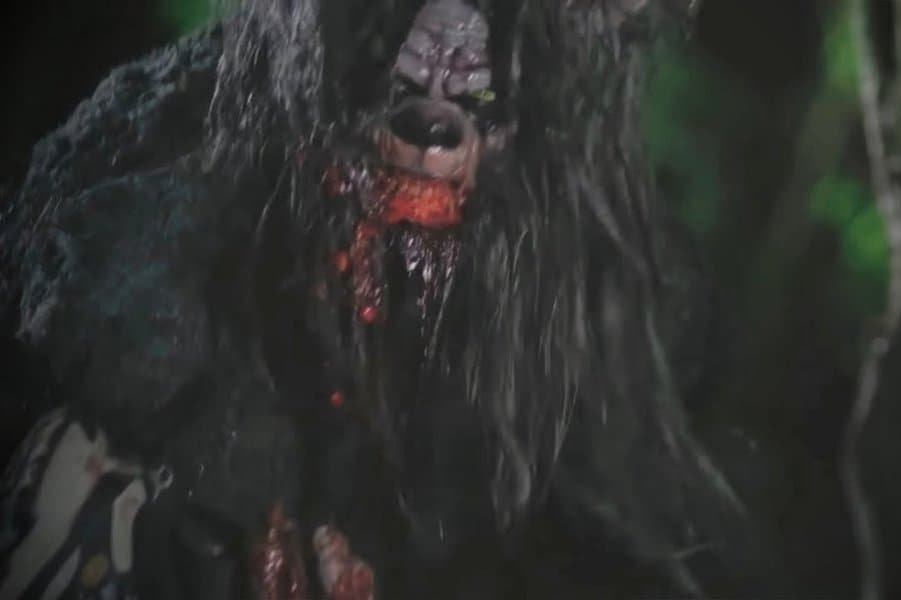 For decades, a mysterious creature, The Bray Road Beast, has terrorized Walworth County, Wisconsin. According to legend, the beast is a werewolf that first appeared in the area in the late 1930s. The most recent sighting was in 2018 and 2020.

Several witnesses encountered the beast on Bray Road and describe the creature as a human-wolf hybrid with red eyes. In some cases, it chased the witness and left scratch marks on cars. Other witnesses claim it simply ran off. The Beast of Bray Road is one of the scariest mythical creatures and might be roaming the county still. 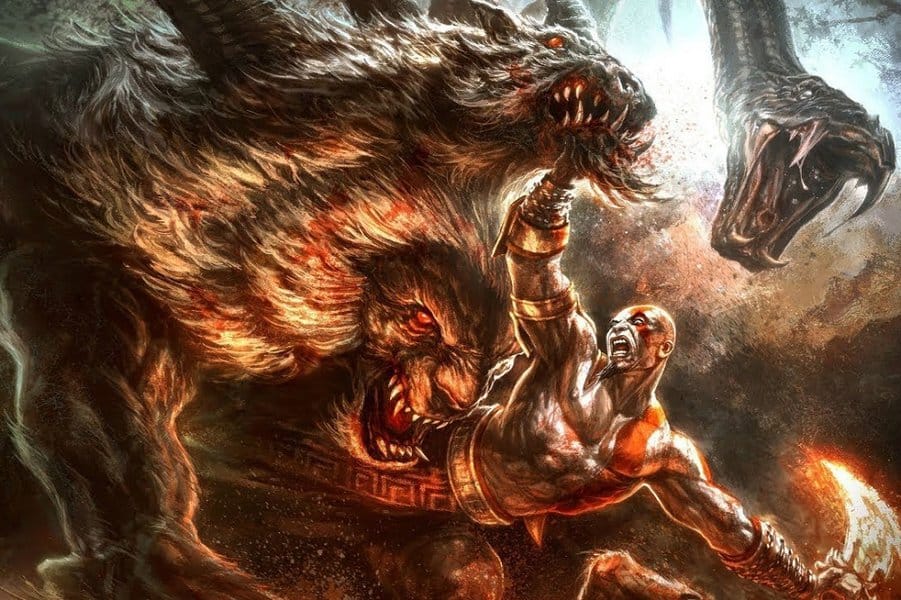 In Greek mythology, several horrifying creatures make it tough to sleep at night. However, few compare with the mythical creature Chimera. The fire-breathing creature has the head and body of a lion with a goat’s head on its back and a tail with a snake’s head. The monster combines some of the fiercest and most evil animals in history.

The Chimera has evil blood running through its veins. The creature is the child of a monstrous serpent, Typhon, and the half-woman/half-snake Echidna. It also has evil siblings, including Lernaean Hydra and Cerberus. 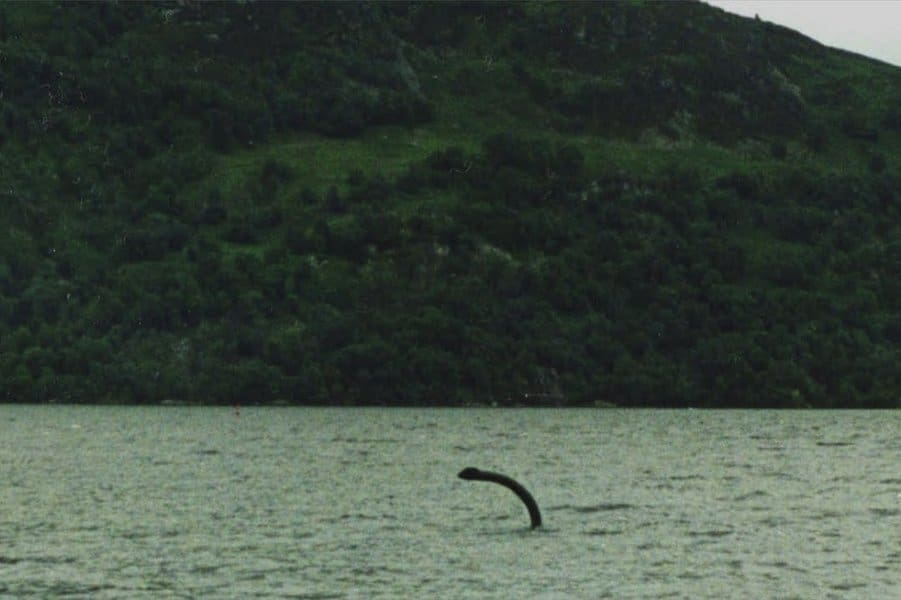 The Loch Ness Monster is one of history’s most famous mythical creatures. It appears in Scottish folklore and even has the nickname Nessie. Sightings of Loch Ness go back as far as the 6th century and as recent as 2014.

However, a 1933 sighting turned the creature into a worldwide phenomenon. Its name comes from the region it appears in most, Loch Ness, Scotland. The giant sea monster has large humps and a long neck. The massive humps stick out of the water as the creature hunts its prey in the ocean. 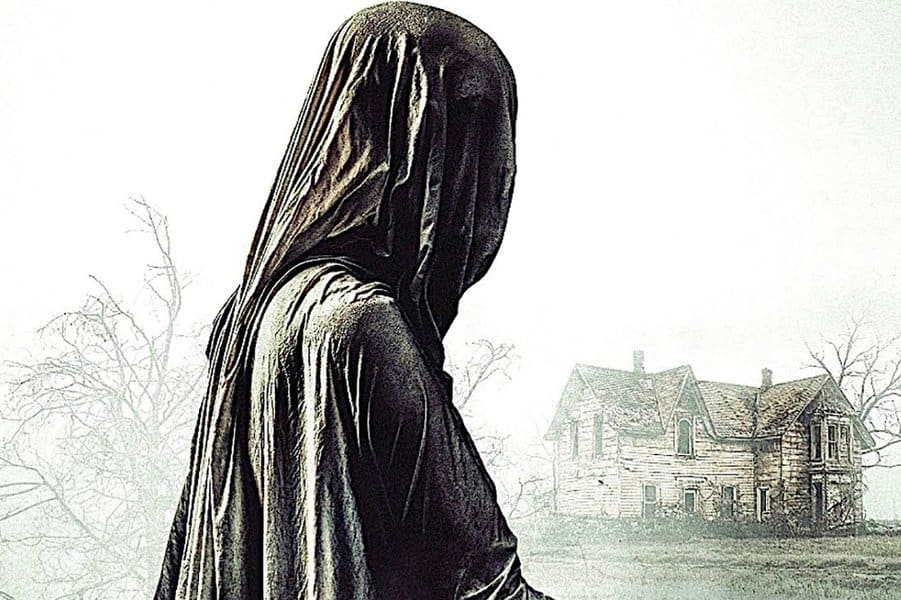 The legend of La Llorona is one of the most fear-inducing tales. According to folklore, she was a mother who drowned her two children and felt immediate guilt. She committed suicide but couldn’t get into the afterlife. Instead, the demon’s stuck on Earth searching for her kids.

The tale of La Llorona mostly appears in Mexico, Venezuela, and parts of the United States. However, the legend dates back to the 1550s in Ancient Mexico. For centuries, parents have warned their children if they wander off in the dark, the evil La Llorona will kidnap and drown them. The vengeful ghost continues to strike fear into the hearts of children all over the globe. 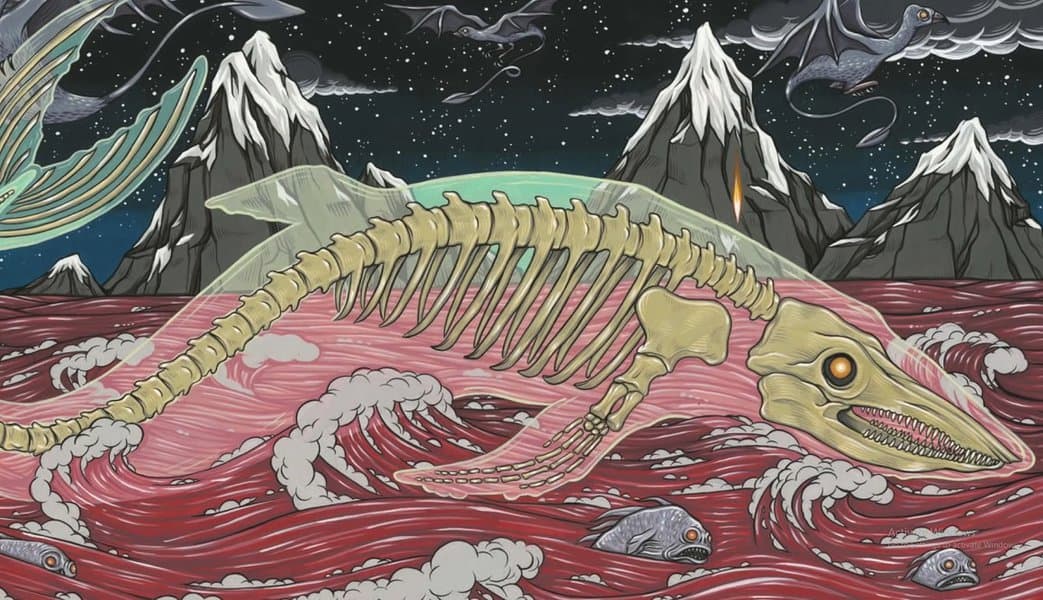 The Japanese mythical creature Bake-Kujira is one of the scariest monsters in history. However, little children don’t need to be afraid. On the other hand, fishermen who hunt whales should be terrified.

According to legend, the Bake-Kujira is a Yokai or a strange phantom ghost. It resembles a giant whale skeleton and swims in the sea with bizarre-looking fish. Bake-Kujira usually targets fishers and villages that practice whaling. However, the monster doesn’t just attack a village. Instead, the creature curses the villages with plagues, famine, and other disasters. 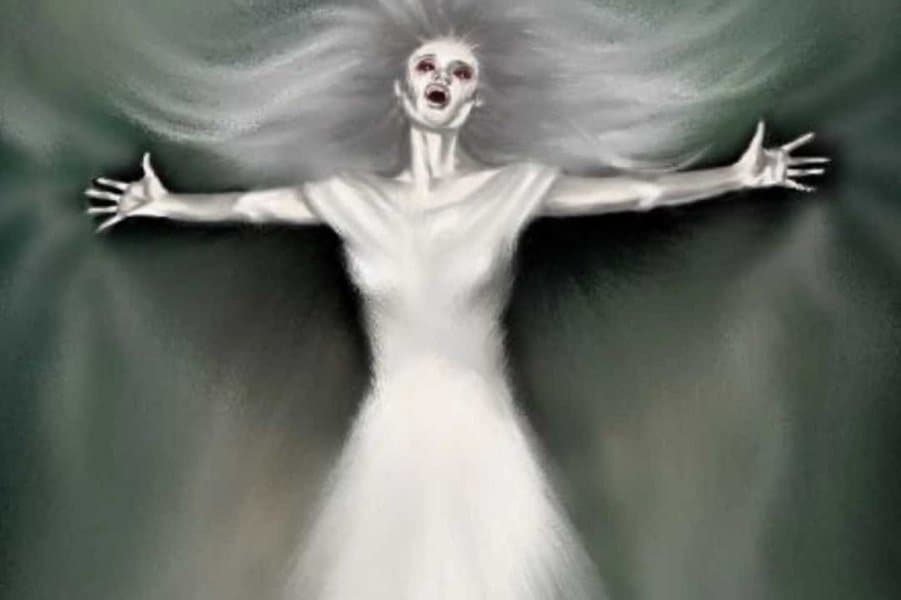 Even mystical creatures with good intentions can still make the hair on the back of the neck stand up. The Banshee appears in Irish folklore and has a frightening wail and spine-chilling shriek. The creature can take the appearance of a beautiful woman, but underneath is a hideous old monster with a pale complexion.

She often shows up to inform a family about impending death. However, she intends to allow the family to cherish the last days of a relative’s life. Regardless, she’s still one of the scariest creatures in Irish folklore. 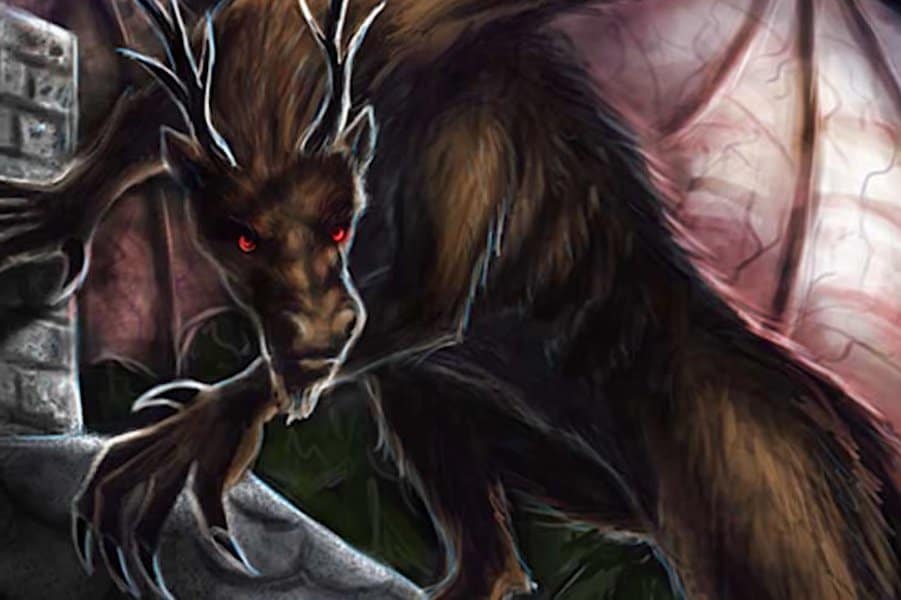 In North America, the Jersey Devil is the most horrifying mythical creature. In most cases, it’s a creature with the body of a kangaroo and the head of a horse with red eyes, claws, horns, and bat-like wings.

According to legend, the Jersey Devil lives in the Pine Barrens in New Jersey. In the 1700s, Mother Leeds gave birth to her 13th child but cursed it. It turned into the creature and flew out of the chimney. The first sightings of the Jersey Devil occurred in the late 1800s, with a surge of sightings in 1905. Reports continued throughout the 30s, 50s, and 60s. 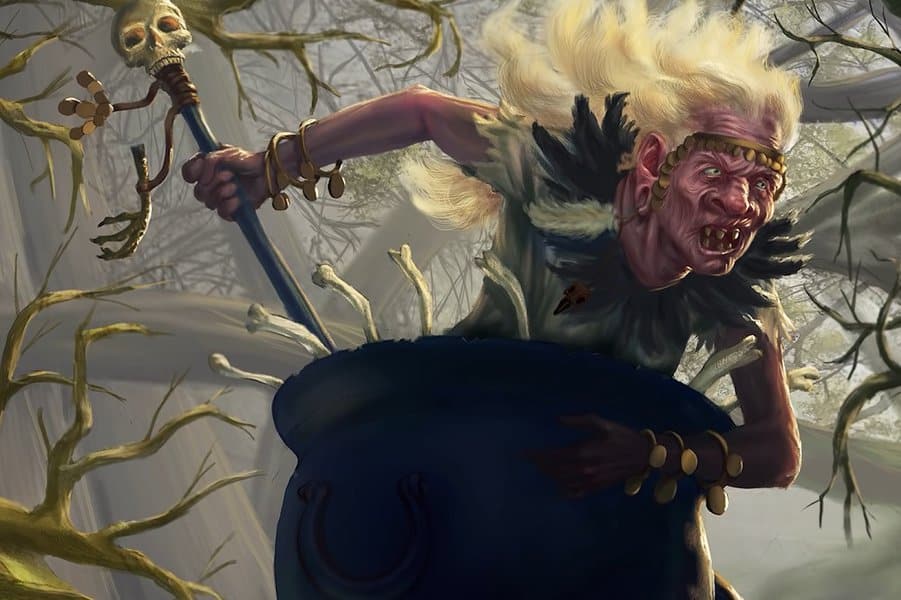 Deep in the dark forests exists a creature so terrifying it causes grown adults to whimper in fear. That scary mythological creature goes by the name Baba Yaga. Slavic folklore describes Baba Yaga as an old, thin witch living in the deepest and darkest part of the forest.

Parents use the scary story to keep their kids from wandering into the woods. At times, Baba Yaga simply teaches kids to respect the forest. Other times, she kidnaps the children and takes them back to her home in the dark woods. 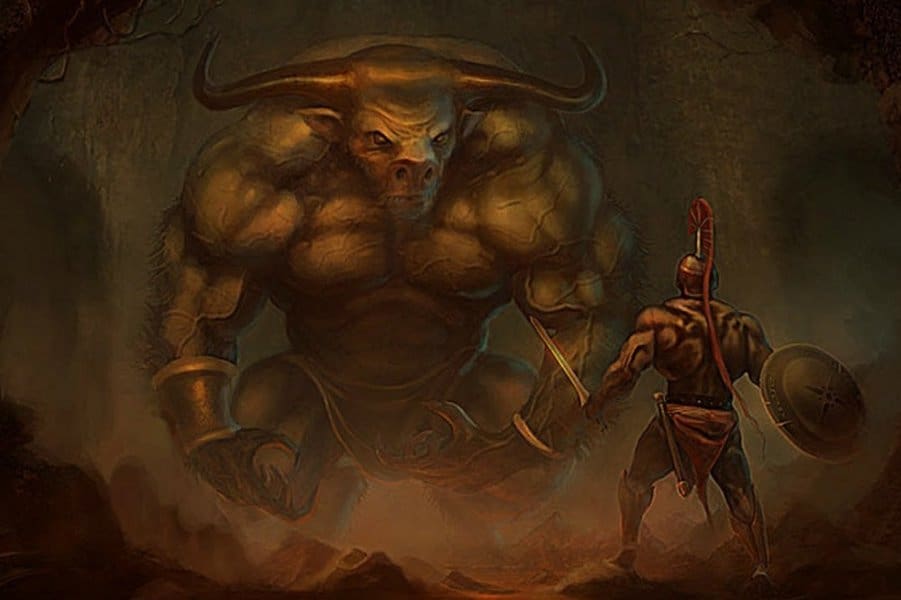 The Minotaur is one of Greek mythology’s scariest creatures. The evil monster has the head and tail of a bull but a man’s body. Plus, it enjoys eating humans. He’s the child of King Minos’s wife, who fell in love with the Cretan Bull. The Greek monster terrorized his victims in this mythical horror story.

According to legend, King Minos created a labyrinth for the Minotaur to call home. However, the King often sent his enemies to the labyrinth so the Minotaur could eat them. 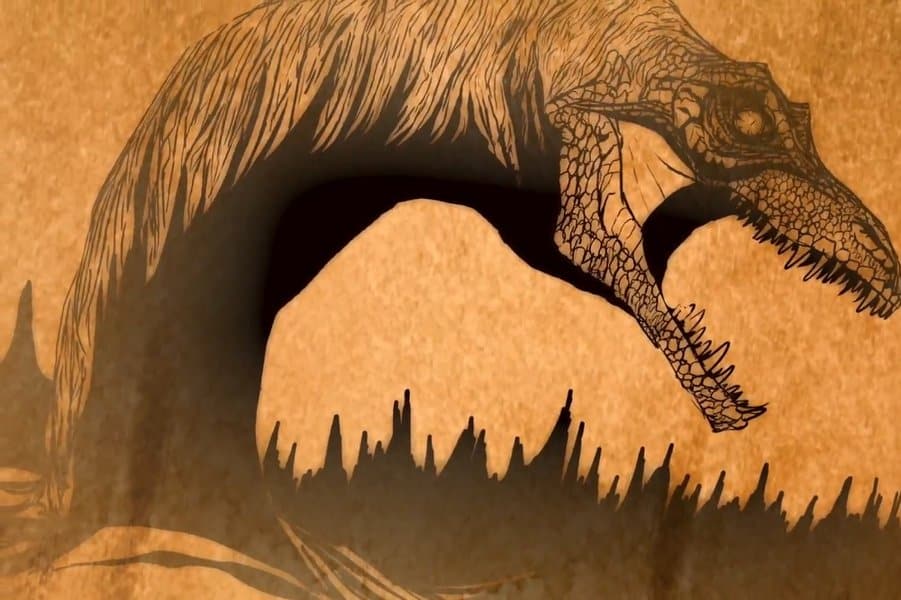 The Loch Ness monster isn’t the only creature hiding in the ocean. Legend has it that the Iroquois and early Europeans had numerous encounters with a sea creature nicknamed Champ. Indeed, the most recent sightings took place in 2005. There have been similar sightings of Champ in Quebec, Vermont, and New York.

Witnesses describe Champ as a giant sea monster with three teeth and oddly colored eyes. In the late 1970s, a photograph supposedly showed Champ’s head in the lake. The scary mythical creature is a major tourist attraction in New York and Vermont. 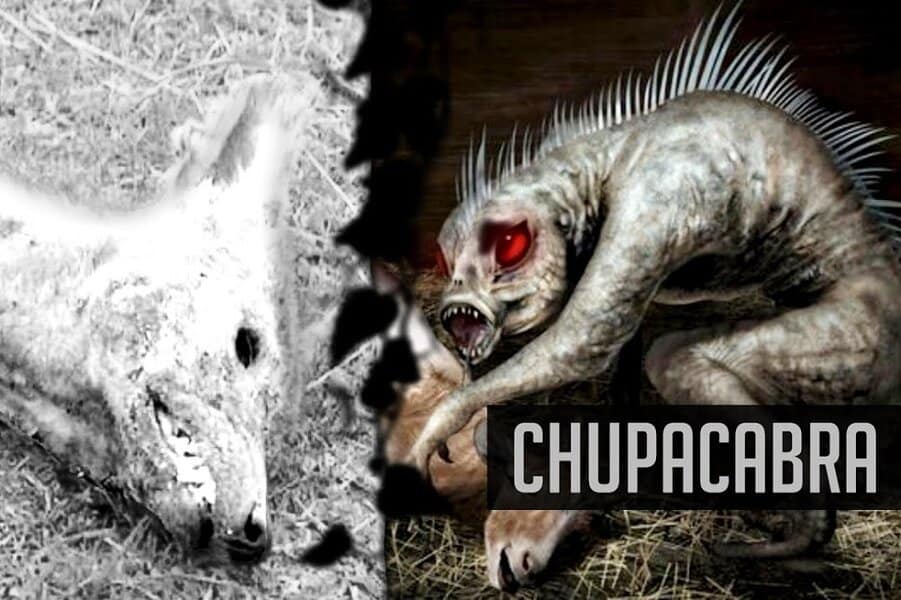 Legend has it that the terrifying Chupacabra is a giant vampire-type cannibalistic creature. It often sucks the blood from goats and livestock. For decades, there were whispers of the creature in Chile, Maine, Russia, and the Southwestern United States. However, a 1995 sighting in Puerto Rico gained the monster international fame.

Depending on the region, the Chupacabra’s appearance varies. For instance, in Puerto Rico, the Chupacabra is the size of a small coyote with reptile-like features and a jagged spine protruding down to the tail. In the US, the urban legend looks like a tiny but vicious dog with fangs and giant muscles. Sightings of the creature continue to this day. 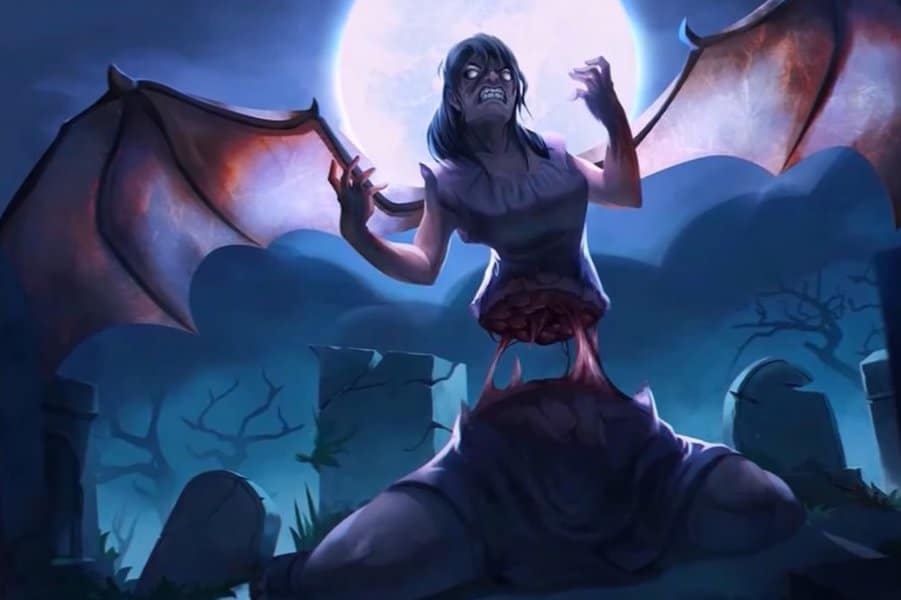 The terrifying Manananggal is one of the scariest mythological creatures in Phillippine folklore. At night, it changes into a grotesque monster with bat-like wings, teeth like a vampire, and an extended tongue. If that’s not scary enough, it can separate its torse from its lower body.

It loves taking advantage of easy victims such as a person sleeping. However, it also targets pregnant women and sucks the fetus’s heart out. The only way to defeat the deadly creature is to spread salt or holy water on the lower body. 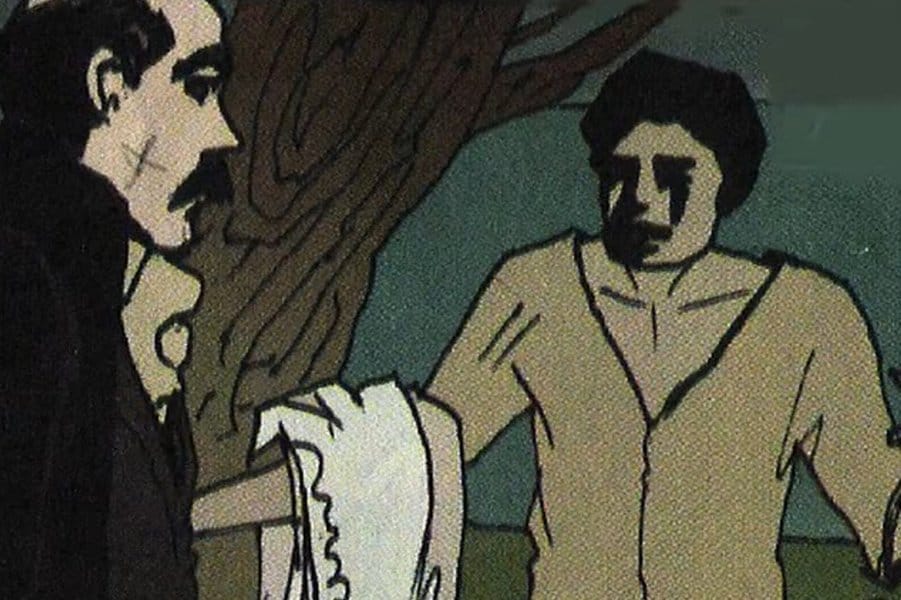 La Cegua is a horrifying creature in Nicaraguan folklore, but her scary stories are told all over Central America, including in Mexico, Spain, El Salvador, and Panama. La Cegua is a shapeshifter that usually turns into a beautiful long-haired woman to seduce unfaithful men.

Of course, the men can only see her from behind. When La Cegua turns around, she reveals a disturbing horse face skull. The sight of her grotesque face is enough to make cheating men go insane.

See more about - The 10 Most Interesting Australian Mythical Creatures