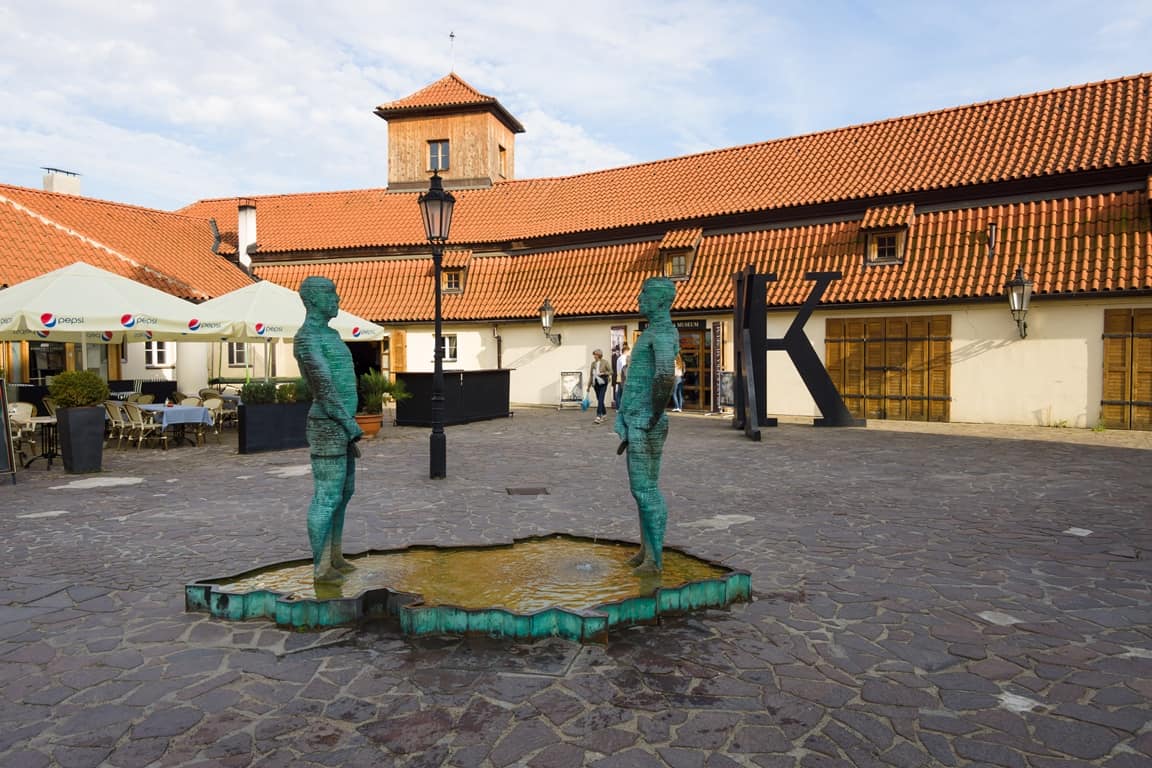 14 Weirdest Sculptures From Around the World

Art is subjective. Whether you are looking at a famous painting, an abstract sculpture, or an ancient drawing, your interpretation will be different from others. This is especially true when it comes to sculptures. While many are of the human form or resemble objects we are familiar with, this isn’t always the case. There are some weird and wonderful sculptures that have been created to challenge people’s views. Others make a statement about certain political or social issues. And some are just plain strange. That’s what this article is going to focus on. The weirdest sculptures from around the world.

These weird and sometimes controversial sculptures appear in locations all across the globe. From giant shuttlecocks in Kansas City to peeing statues in Prague, there is something for everyone on this list. 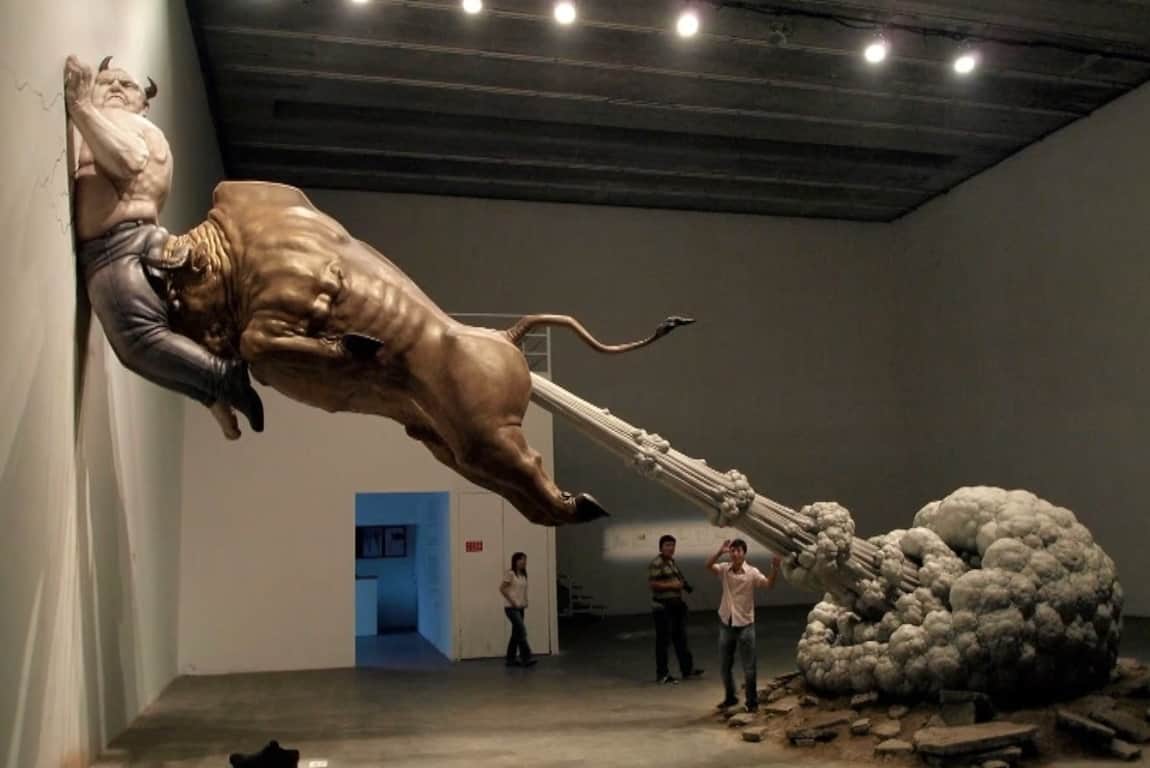 Yes, this is a statue of a bull farting. The brainchild of artist Chen Wenling, Bull Fart Sculpture was first exhibited in a Beijing art gallery in 2009. It is meant to depict the financial crisis, with the bull pinning a man to the wall. The man in question, who has horns like the devil, is meant to represent Bernard Madoff, the infamous conman responsible for one of the biggest frauds in American financial history. It is certainly an eye-catching sculpture that is unlike anything you are likely to see in your local art gallery.

This outdoor sculpture by David Cerny is of two men relieving themselves. Not only are they created to look like they are urinating, but they actually shoot water out of their penises. This is one of the weirdest statutes you will encounter in Prague, which is known for its odd artworks. The basin the two six-foot 11-inch bronze statues stand in is shaped like the Czech Republic, with the statues literally pissing on their country. What’s even weirder is you can command the men to write messages into the water via text. Bizzare. The Prague Post even ranked it number one on their list of the ‘top 10 strangest statues in Prague.’ 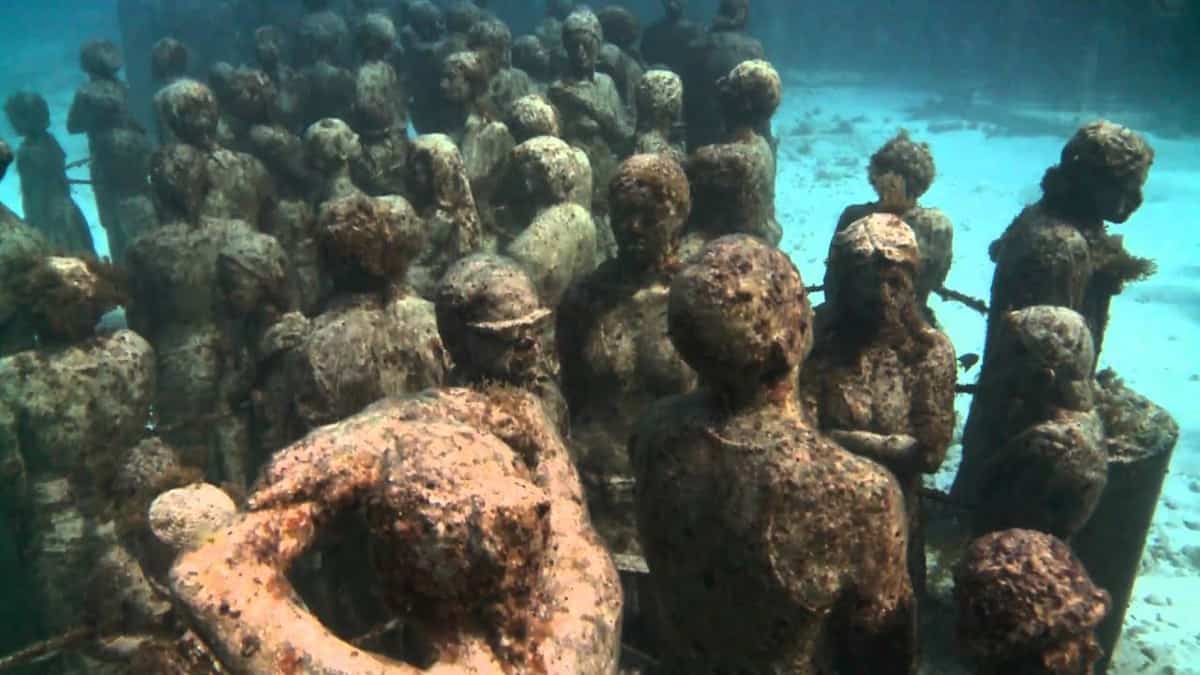 This underwater experience is a must see for anyone who visits Cancun, Mexico. The Underwater Museum of Art contains over 500 sculptures from several different artists, all found underwater. It is the world’s largest underwater art installation. One of the most thrilling sections of the museum is The Silent Evolution by Jason deCaires. The British sculpturer uses real life models to create sculptures of people doing normal things, such as a man watching television and a group of people holding hands in a circle. This really is an incredible thing to see, with The Silent Evolution occupying 420 square meters and having a total weight of over 200 tons. 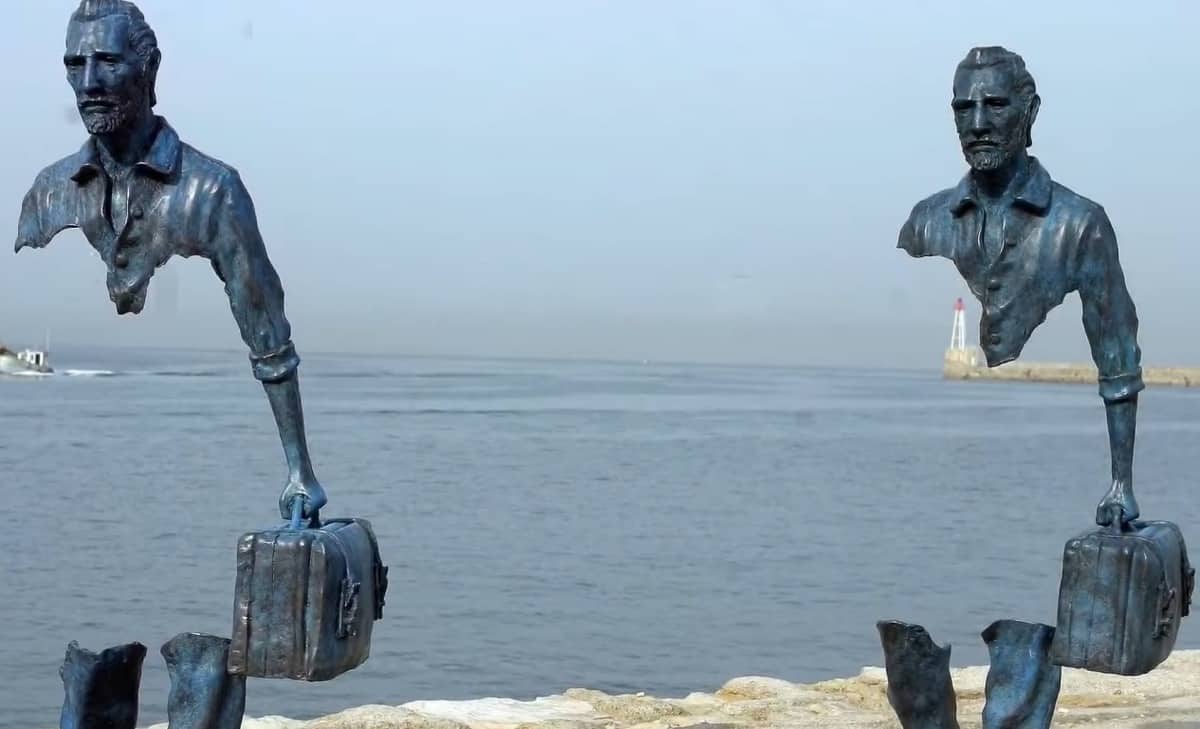 These statues are the creation of surrealist artist Bruno Catalano. The bronze statues look like normal humans, except for the fact that large parts of their bodies are missing. Les Voyageurs, also known as The Travellers, consists of ten individual statues, each holding a case of some description. Catalano has said he believes each of us leaves a piece of who we are when we leave somewhere, which is what these statues depict. There is also a deeper meaning connected to the loss migrants experience when they leave their homes. You can learn more about these weird and fascinating sculptures here.

“Klaus Weber’s The Big Giving on the So” (CC BY-SA 2.0) by Commonorgarden

This absurd collection of sculptures contains six weird-looking statues in various poses. One appears to be going to the toilet, another is pouring water over its head, while a third is projectile vomiting. All of the statues, which resemble piles of dirt with human heads and limbs, shoot water from some sort of orifice. The most compelling is the statue vomiting water, while the one taking a piss is also quite alarming. The German artist behind this abstract creation calls it The Big Giving, whatever that is meant to mean. There is little context given to Klaus Weber’s sculpture, so good look trying to work out what it all stands for. 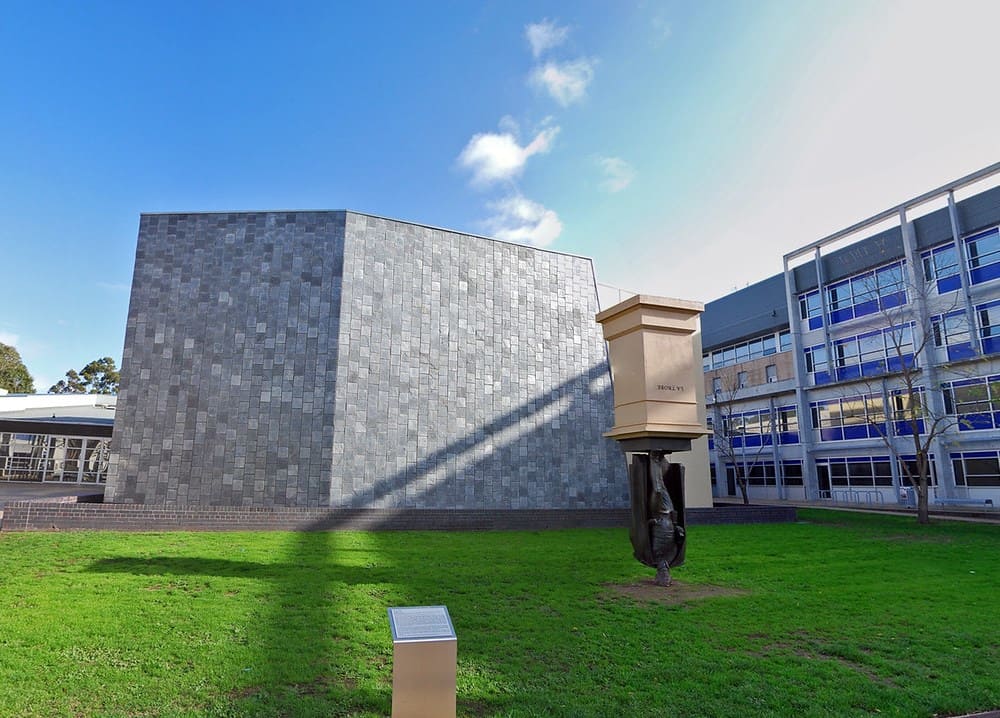 “Upside Down Charles La Trobe Statue at L” (CC BY 2.0) by phil.lees

Situated on the Bundoora campus of La Trobe University, this statue of famed British leader Charles La Trobe is erected upsidedown. La Trobe’s head is slightly buried in the ground with the base in the air. It is quite strange and was crafted by Melbourne sculptor Charles Robb. Officially called Landmark, the monument stands 16 feet tall and is made from an assortment of materials. The question as to why it is upsidedown is a good one. There are many different interpretations, with Robb himself saying that “the statue embodies the notion that universities should turn ideas on their heads.” 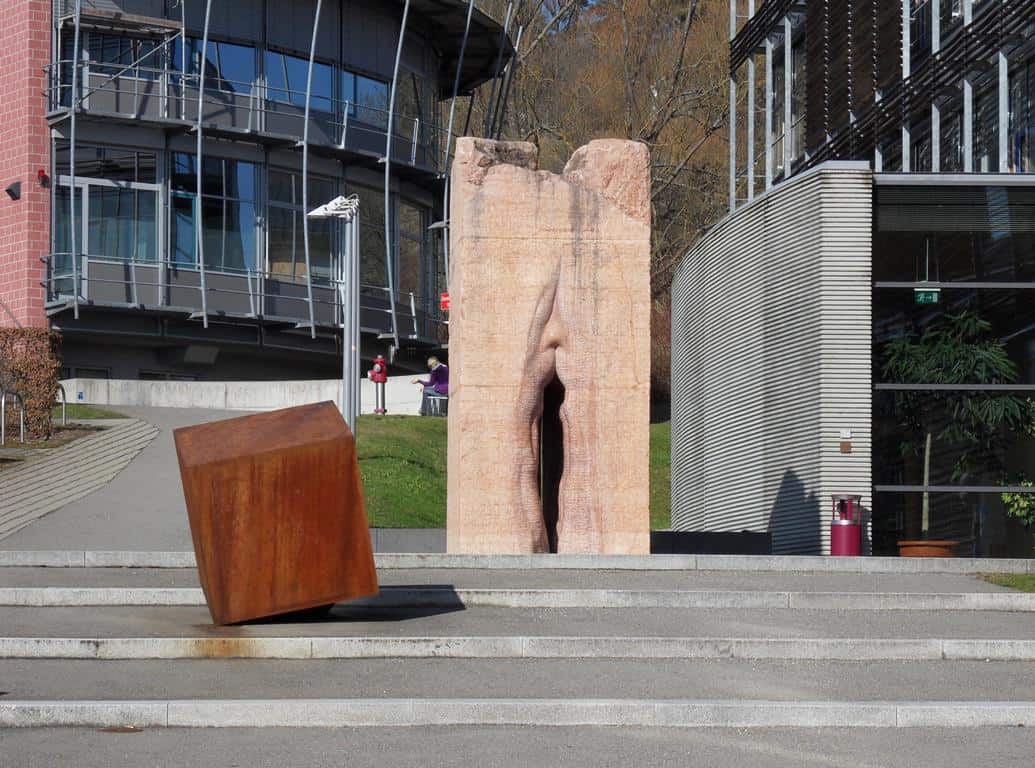 Otherwise known as the Stone Vagina, this unusual sculpture is, you guessed it, a vagina. Peruvian artist Fernando de la Jara erected the revealing monument in 2001 on the grounds of the University of Tübingen’s Institute for Microbiology and Virology. Resembling a woman’s vulva, the installation is made from red Verona marble and cost a whopping €120,000 (roughly US$130,300). This famous statue is meant to celebrate the body or something like that. It got global media attention in 2014 when an American exchange student got stuck inside. Five fire engines and 22 firefighters were called to free the young man. It took them half an hour but the unnamed student was finally able to escape unharmed albeit slightly embarrassed.

See more about - Where To Buy Art Online: 16 Awesome Stores 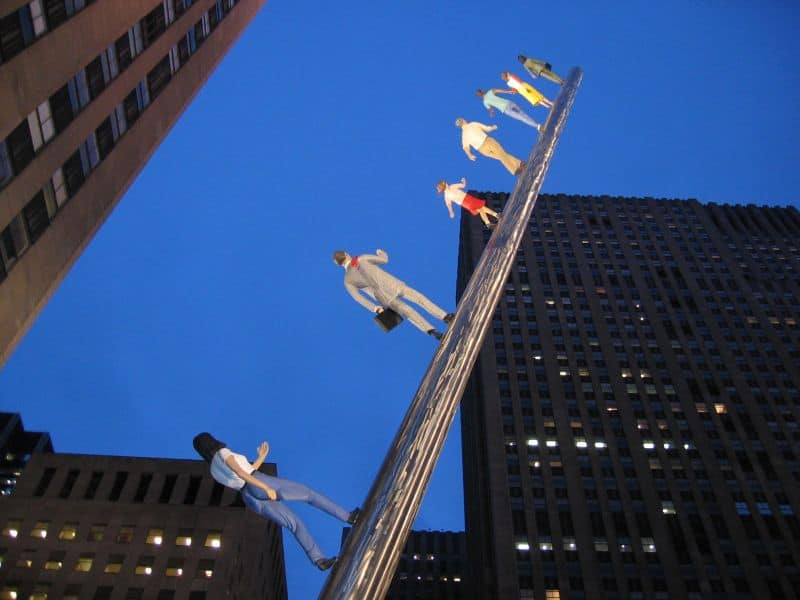 doreen from Shanghai, China, CC BY 2.0, via Wikimedia Commons

This outdoor sculpture by Jonathan Borofsky was first installed at Rockefeller Center in 2004. The work features several different people scaling a 100-foot-tall stainless steel pole. The pole is set at a 75-degree angle, with the likes of a businessman, young girl, and student show walking along the pole. The artwork is inspired by a story Borofsky’s father would tell him about a father and son who traveled up into the sky to talk to a friendly giant. He describes the piece as “a celebration of the human potential for discovering who we are and where we need to go.” Well, it is certainly eye-catching and easily one of the weirdest sculptures in the United States. 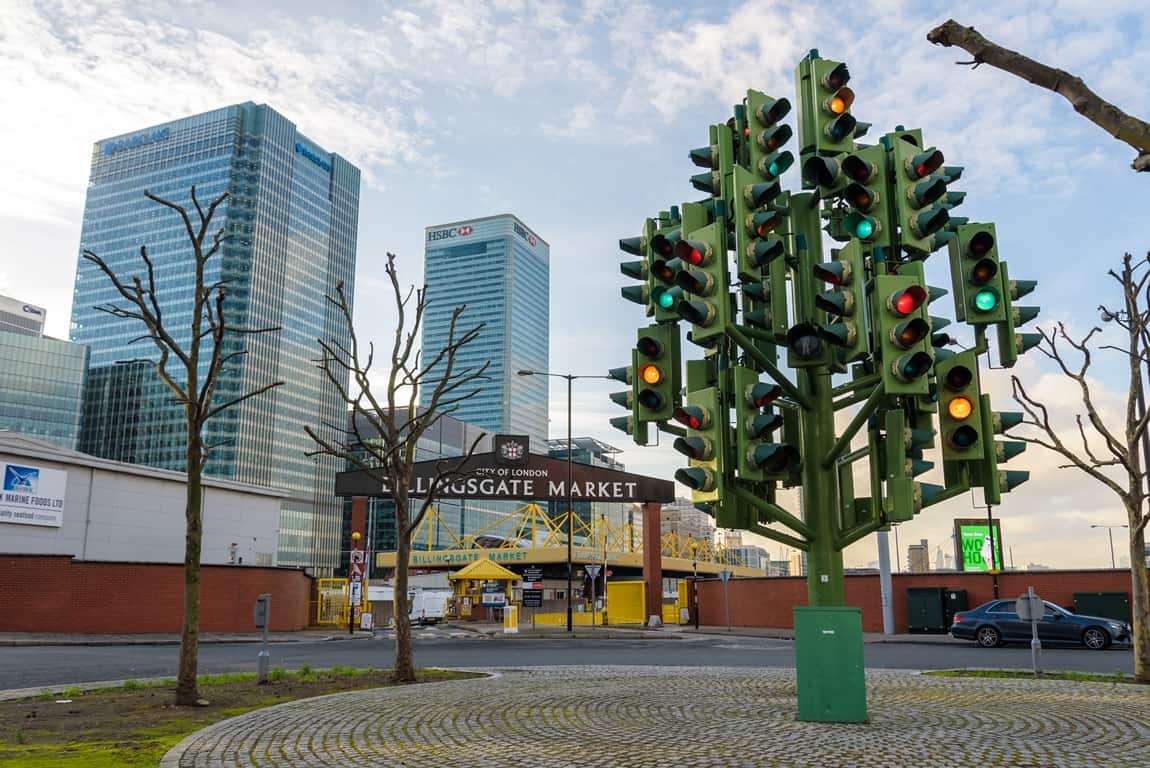 This popular sculpture is a bunch of traffic lights melded together to form a tree-like structure. The man responsible is French sculptor Pierre Vivant. His creation was the winner of a competition run by the Public Art Commissions Agency for the London Docklands Development Corporation. The 26-foot tall sculpture contains 75 sets of lights, each controlled by a computer. While interesting to view during the day, it is at night when the lights are shining and blinking that this sculpture truly comes alive.

Explaining his vision, Vivant said, “The Sculpture imitates the natural landscape of the adjacent London Plane Trees, while the changing pattern of the lights reveals and reflects the never ending rhythm of the surrounding domestic, financial and commercial activities.” 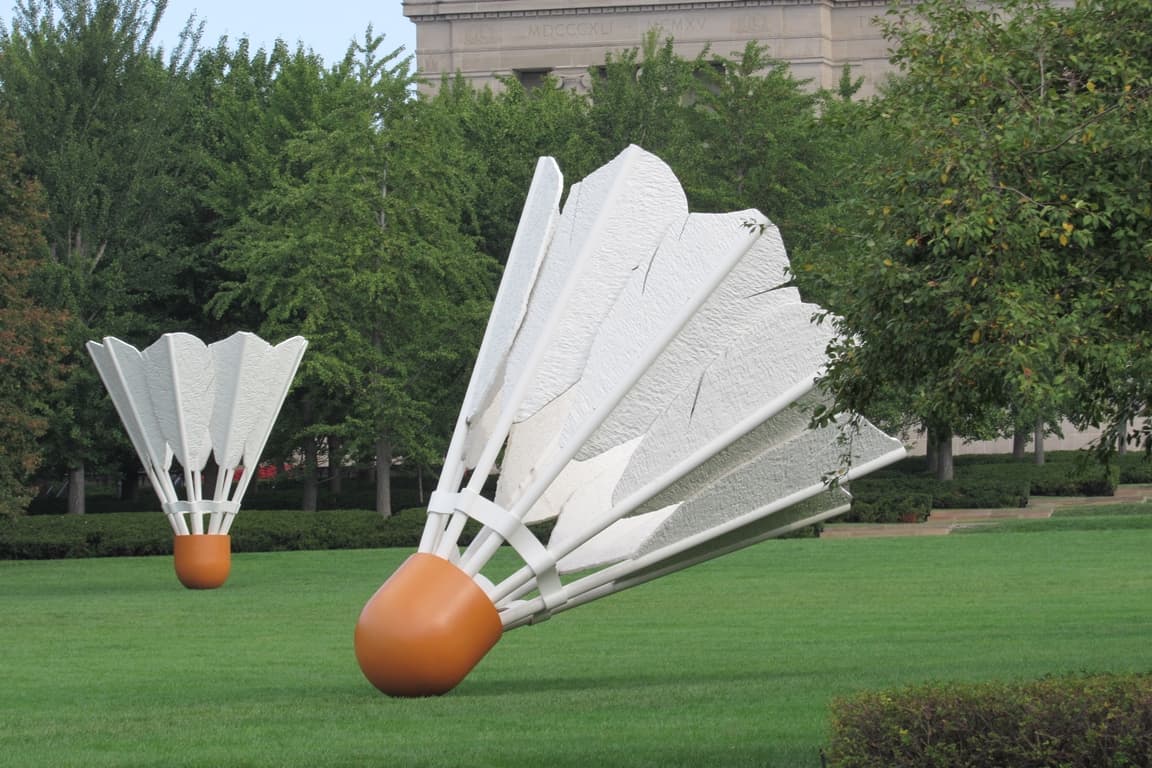 This art installation is comprised of four giant shuttlecocks. Positioned around the Nelson-Atkins Museum of Art in Kansas City, these huge shuttlecocks are 18-foot tall and made from aluminum and fiberglass. The idea comes from the husband-and-wife team of Claes Oldenburg and Coosje Van Bruggen who were inspired by a painting on display inside the museum. While there were some concerns about the installation at first, it is now one of the main reasons people visit the museum. 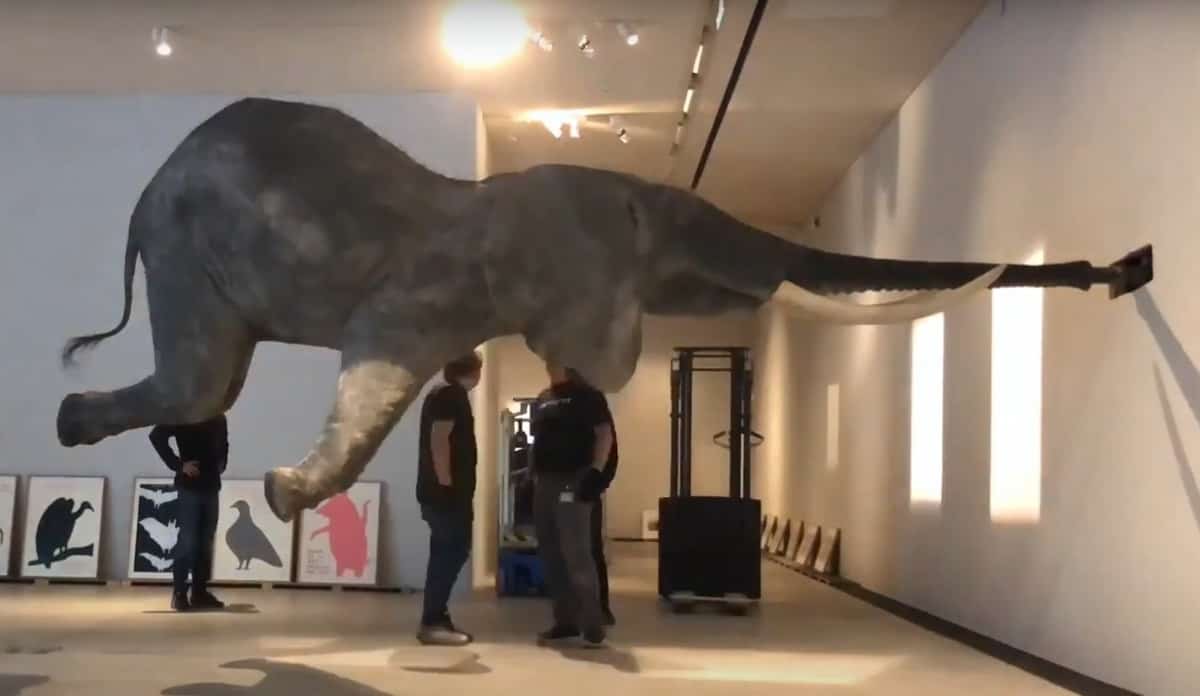 Here is another one of the weirdest sculptures you will ever see. The creation of French contemporary artist Daniel Firman, this weird statue is of an elephant balancing on its trunk. It is meant to represent the elephant balancing 18,000 km above the earth. To get make the elephant as lifelike as possible, Firman chatted with a professional taxidermist to get the texture of the elephant’s skin right. It is a striking exhibition and remains Firman’s most popular piece. 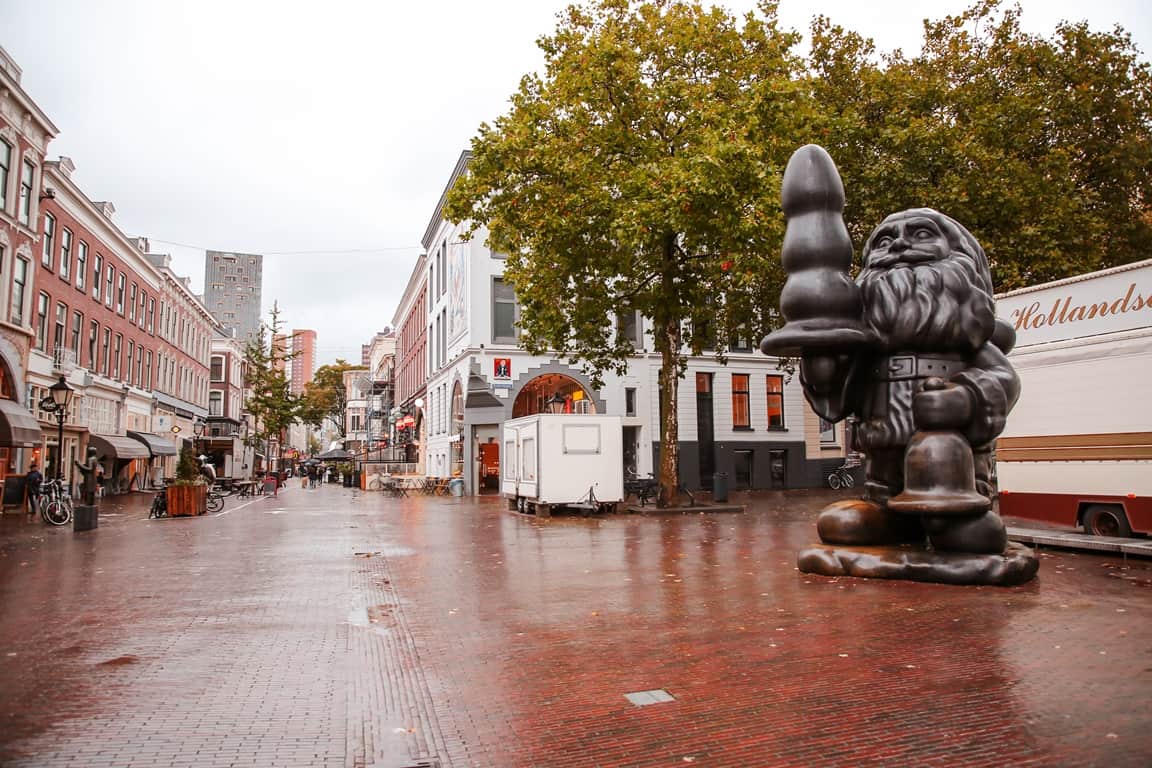 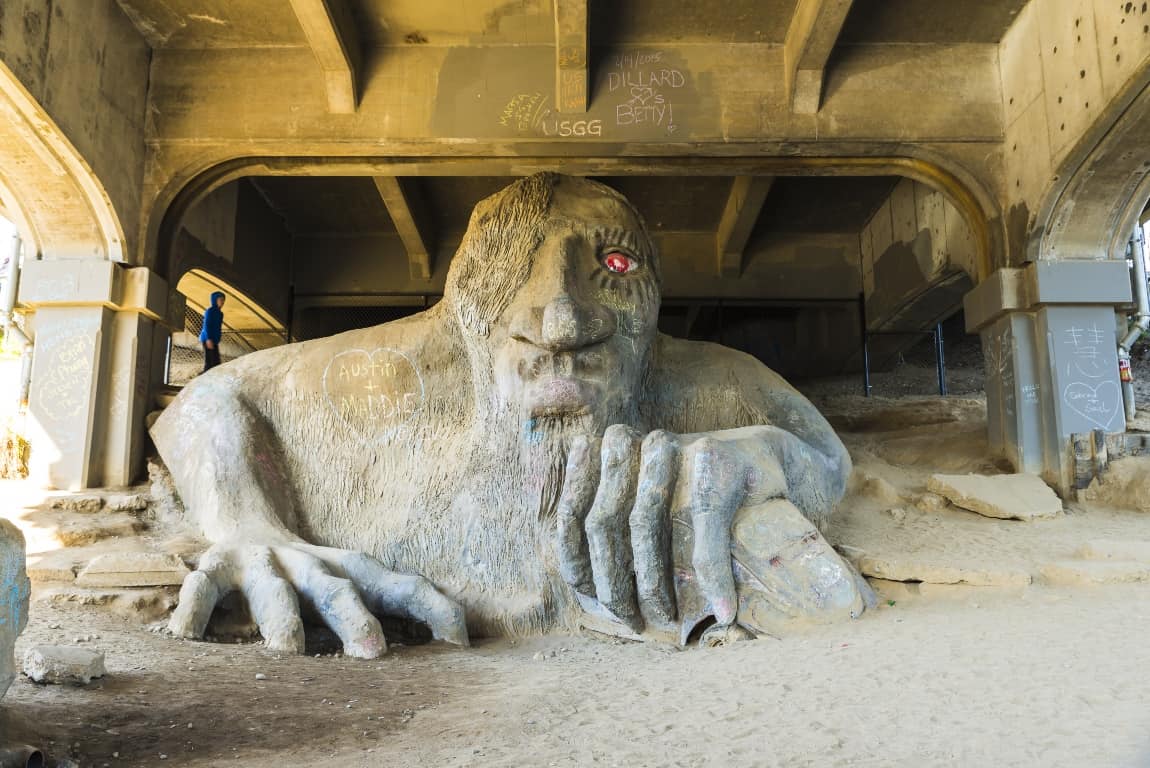 This public sculpture is a tourist attraction found under the George Washington Memorial Bridge. The monument was created by four artists: Steve Badanes, Will Martin, Donna Walter, and Ross Whitehead. The area where it is built was once rundown and attracting nefarious types, with the council hoping the sculpture would bring some life back to the area, which it did. The troll has a VW in its hand that is meant to look like it grabbed it straight from the road above. 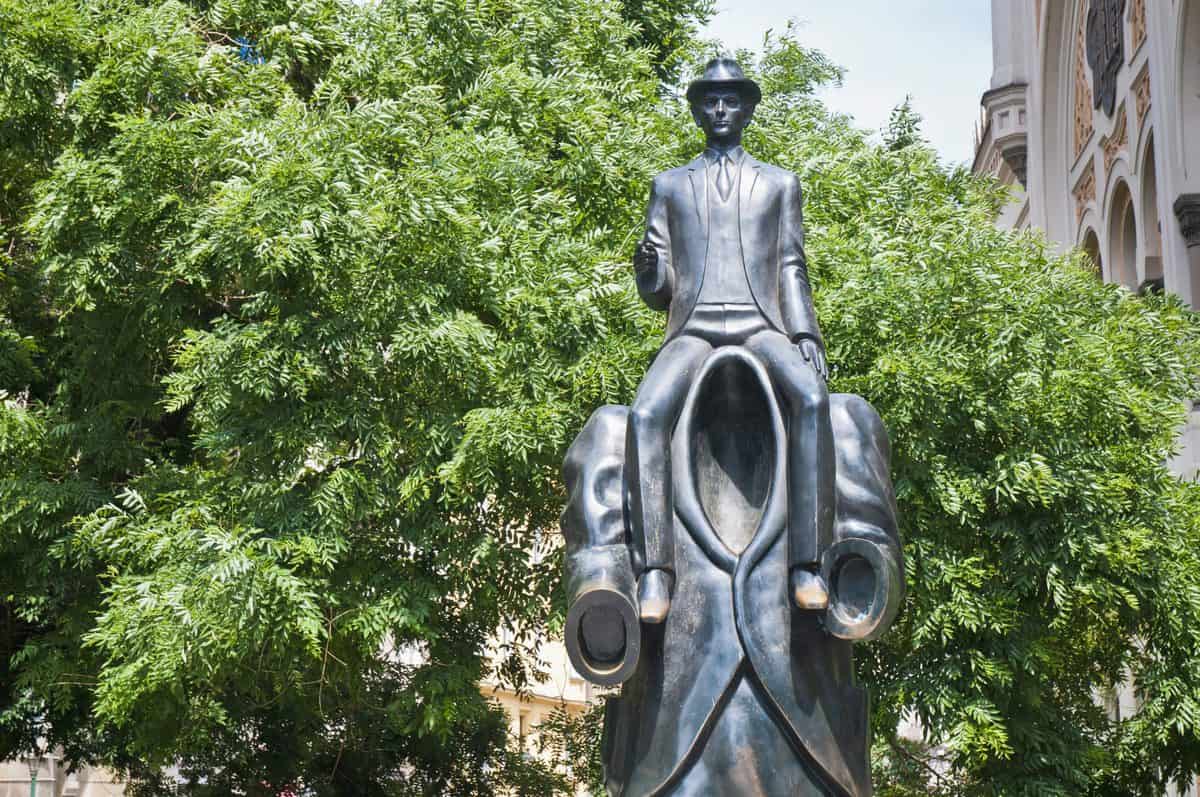 This statue by artist Jaroslav Róna is in memory of writer Franz Kafka. The novelist and short-story writer who was born in Prague is regarded as one of the 20th century’s great literary talents. His writing is quite surreal, which matches this statue inspired by him. It depicts Kafka riding on the shoulders of a headless figure. It is meant to represent his famous 1912 story Description of a Struggle. This isn’t the only Kafka sculpture in Prague, with David Cerny also erecting a 36-foot tall head resembling Kafka. This structure has 42 rotating panels made from stainless steel that reflect light at different angles.