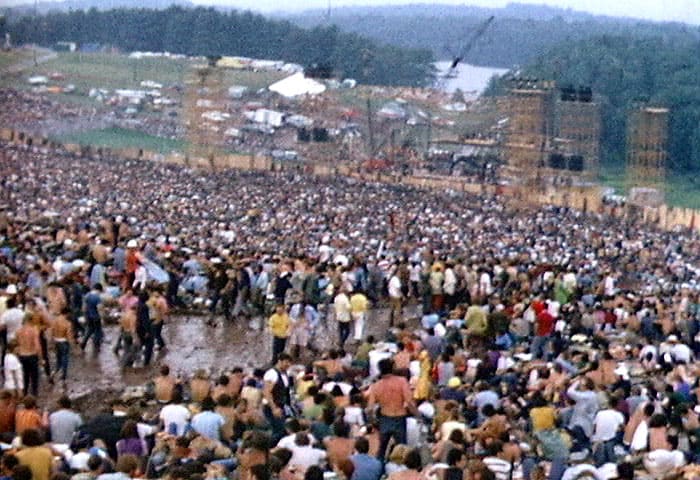 Woodstock 69 is arguably the greatest festival to ever take place on planet earth. Officially known as Woodstock Music and Art Fair, the original Woodstock festival took place over three days from August 15 – 18, 1969. Held on Max and Miriam Yasgur’s dairy farm in Bethel, New York State, United States, the festival attracted more than 400,000 young people across the three days who witnessed 32 music acts play over the course of the weekend.

Incredible Woodstock photos and videos taken during the festival show just how amazing it really was. The festival was a defining moment of the counterculture generation that was the last hippie celebration before the uncertainty of the 70s hit home. Some of the biggest bands in the world played Woodstock music festival, including the likes of Crosby, Stills, Nash & Young, Joan Baez, Creedence Clearwater Revival (a few years before John Fogerty called it quits), Sly and the Family Stone, the Grateful Dead, Canned Heat, The Who, Joe Cocker, and Jimi Hendrix, who closed out the event.

The festival will go down in history as one of the greatest moments in music history. Even with all the amazing acts and the peace and love vibe of the festival, it still had many problems. Food ran out on the first day and the traffic across the weekend was horrendous. The sporadic rain also turned the festival grounds into a mud pit, although some people enjoyed this.

Woodstock’s legacy continues today, with many of the world’s top festivals inspired by what Woodstock Music and Art Fair was able to achieve, although the less said about the 99 edition the better. The original was an event you just had to attend, and if you couldn’t make it or weren’t born during that era, the best way of experiencing the festival is through photos and videos. Below we have collected some great snapshots taken during the festival that highlight just how much of a big deal Woodstock really was. 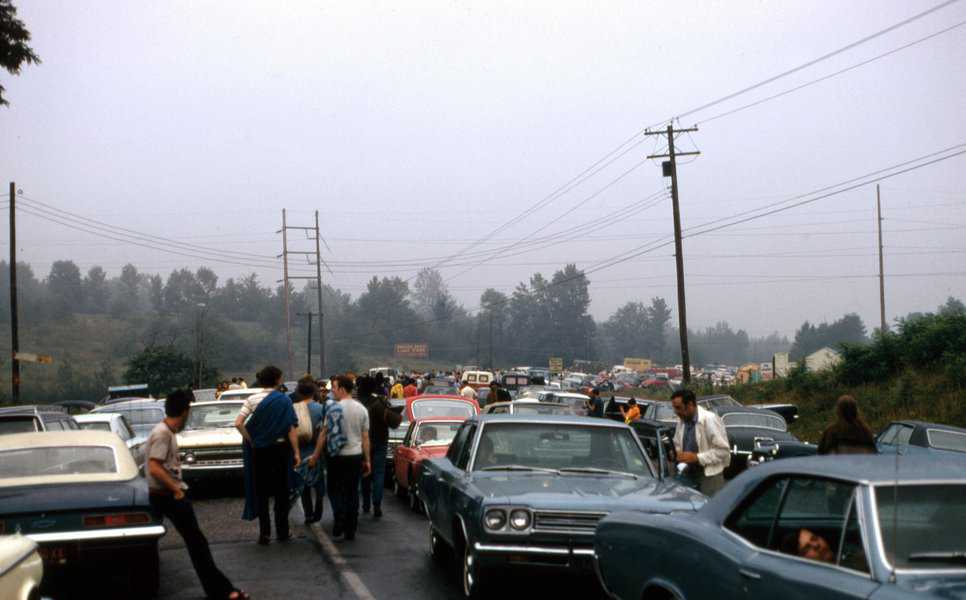 The traffic to the festival was unheard of and caused all sorts of problems. Nobody involved with Woodstock realized it would be such an event, and the local authorities were unprepared for the stream of people that would descend upon the festival. This image shows how crazy the traffic got.

You can see the cars backed up for miles. The traffic was so bad that people turned off their cars, got out, and socialized to pass the time as they waited. Surprisingly there were no road rage or violent incidents reported, with everyone patiently waiting to arrive at the festival. 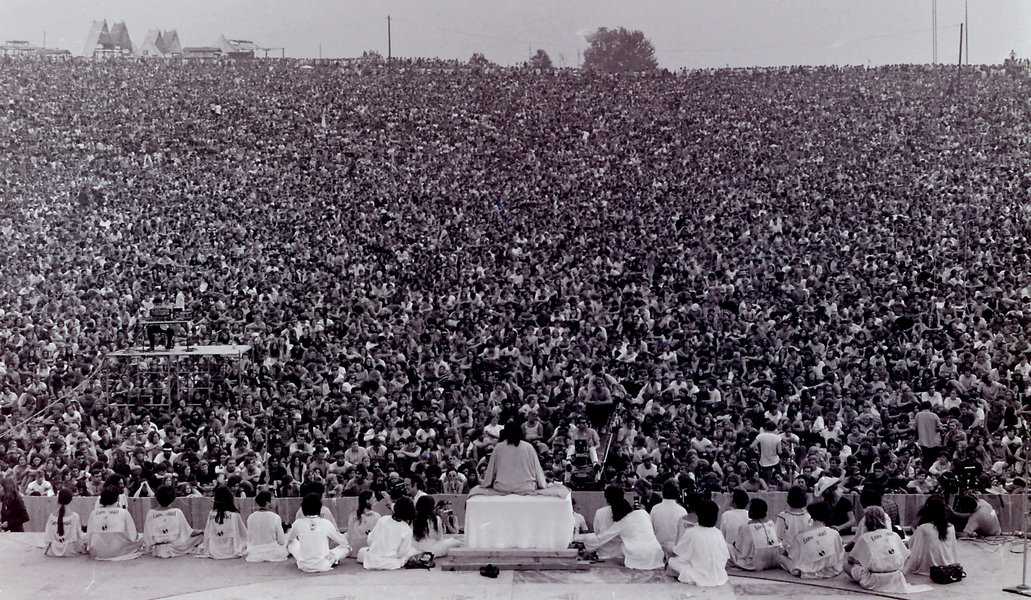 You can see how crowded the festival grounds were in this photo of the opening ceremony. Swami Satchidananda gave a speech welcoming everyone to the festival and this photo of him addressing festivalgoers remains an iconic image.

“I am overwhelmed with joy to see the entire youth of America gathered here in the name of the fine art of music,” Satchidananda said.

“In fact, through the music, we can work wonders. Music is a celestial sound and it is the sound that controls the whole universe, not atomic vibrations. Sound energy, sound power, is much, much greater than any other power in this world. And, one thing I would very much wish you all to remember is that with sound, we can make—and at the same time, break. Even in the war field, to make the tender heart an animal, sound is used. Without that war band, that terrific sound, man will not become animal to kill his own brethren. So, that proves that you can break with sound, and if we care, we can make also.”

You can read the rest of his speech here. 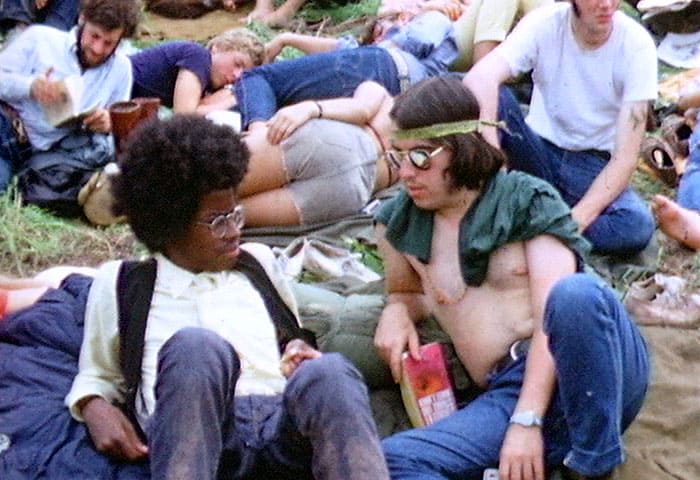 Here’s a great shot of two hippies chilling out on one of the many green hills surrounding the festival. It’s funny that both of them are wearing clothes that would be seen as fashionable today. This proves that fashion comes in cycles and never really goes out of fashion. You can tell from the dirty jeans the guy on the left is wearing that the festival has experienced some torrential rain that’s turned the campgrounds into mud. 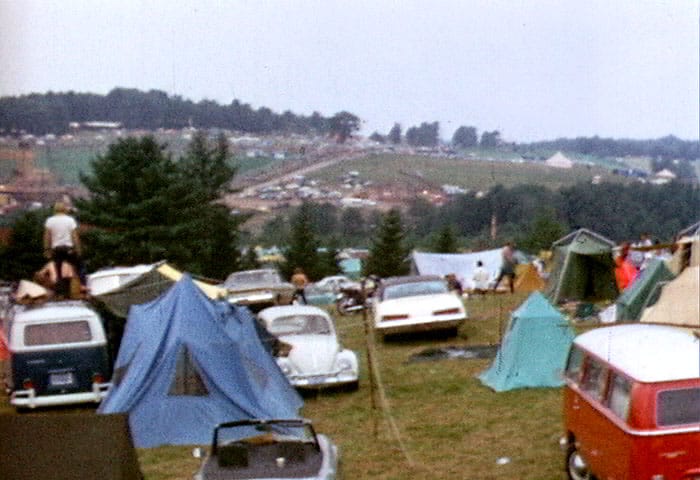 Speaking of camping, here is an image of the area where people could park their cars and pitch their tents. It doesn’t look overly busy so the photo was probably taken on the last day or two. While there were up to 400,000 people at the peak of the festival, by the time Jimi Hendrix took the stage Monday morning that had dwindled to around 200,000. 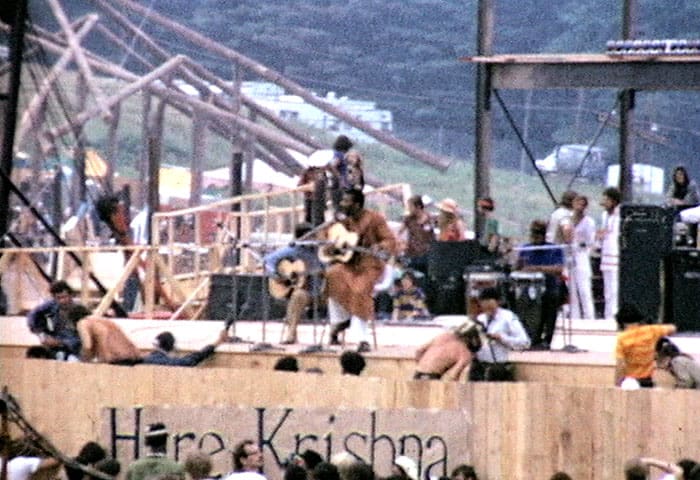 Here you can see Richie Havens who was the first performer of the day. He came on at around 5:oo pm on Friday afternoon and played for just under an hour. He was an American singer-songwriter influenced by folk and soul music. Havens was originally meant to play later but due to Sweetwater being stuck in traffic, he was bumped to the opening slot. 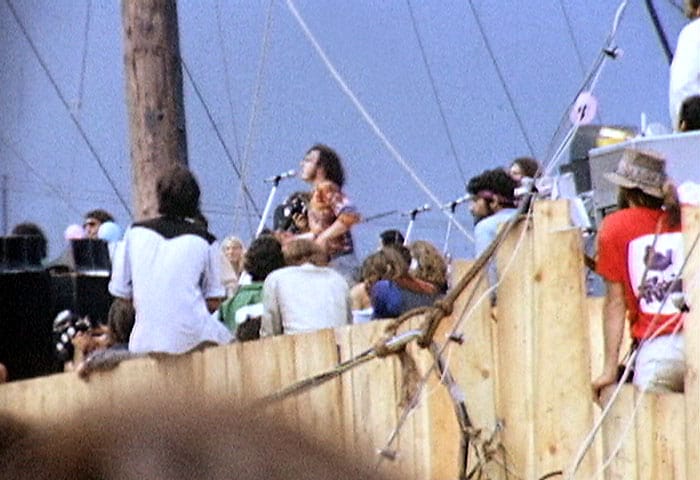 The mighty Joe Cocker played Woodstock with The Grease Band. They kicked things off on Sunday, coming on stage around 2:00 pm, and played for about two and a half hours.

His set was dominated by covers, with Cocker and The Grease Band giving the audience their versions of Bob Dylan’s “Just Like a Woman,” Traffic’s “Who Knows What Tomorrow May Bring,” and most famous of all, the Beatles’ “With a Little Help From My Freinds,” which was a massive hit for Cocker the previous year. 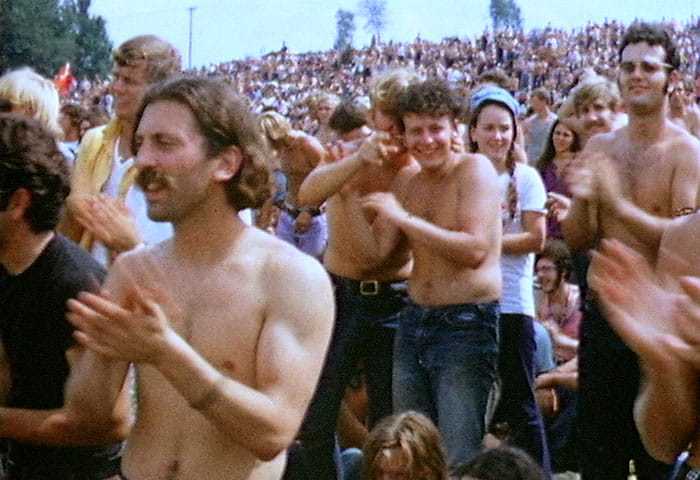 Thousands flocked to Woodstock over the course of the weekend, with this photo showing some revelers on the first day. As you can see they look quite spritely and up and about, although the attitude of many would change once the rain set in and turned the ground into sludge.

Shirts seemed to be optional for men at that time while mustaches were fashionable. Many of rock music fans were there to see the likes of The Who, Jefferson Airplane, and Blood Sweat & Tears. 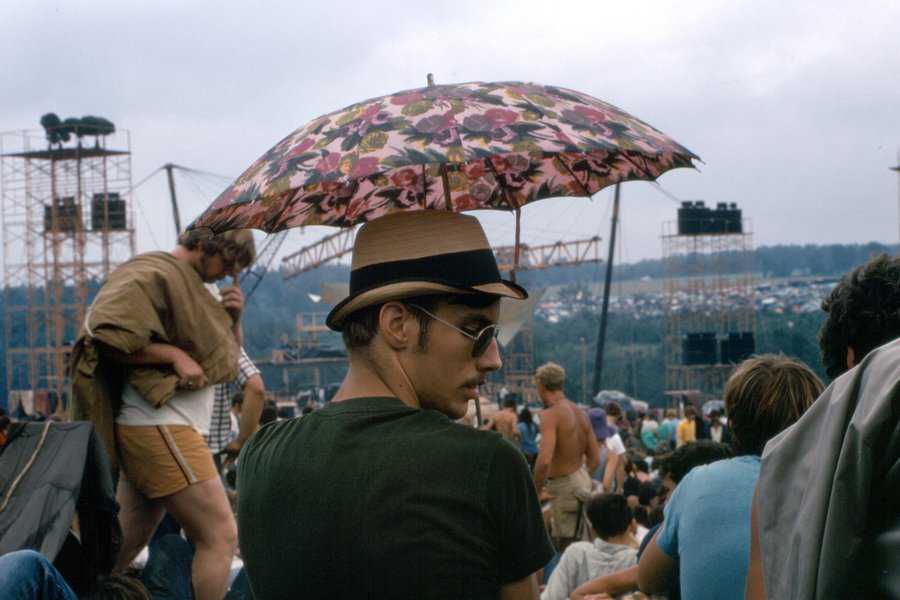 Hipsters aren’t a recent phenomenon. The term was first coined in the 1940s and used to describe jazz fans, but these days it is more of a derogatory word that labels people who are against the mainstream and think it’s cool to like things nobody else knows about.

They are also big on fashion, often sporting vintage clothes and interesting looks. The lad in this photo looks like a modern-day hipster with his moe, shades, fedora-esque hat, and flower umbrella. It seems hipsters have always been around. 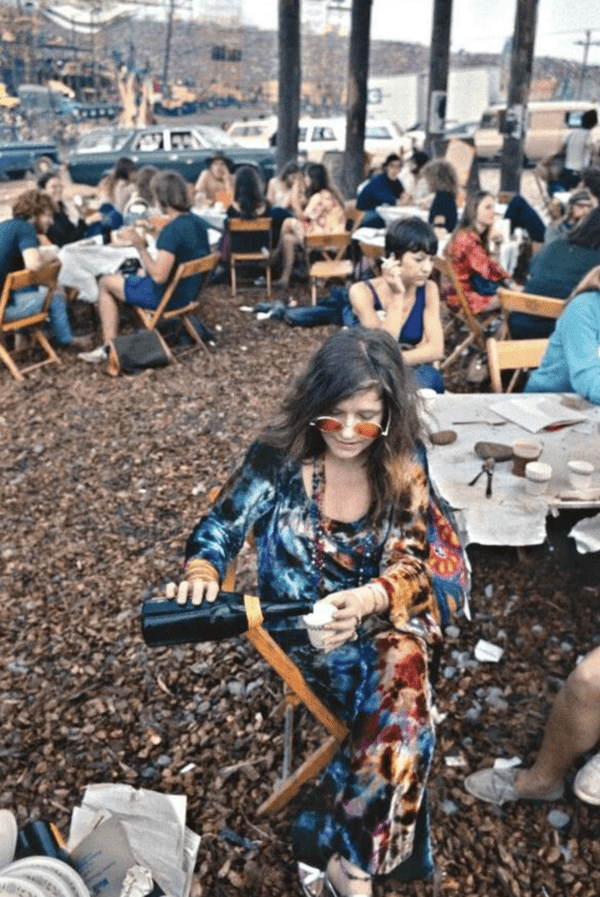 One of the biggest names to play Woodstock was wild child Janis Joplin. The 26-year-old was riding high after the success of the number one album, Cheap Thrills, her last as the lead singer of Big Brother & the Holding Company. Now a solo act, Joplin’s performance at Woodstock was greatly anticipated. Arriving some 10 hours before her set, Joplin spent the day drinking and shooting heroin, eventually taking the stage at 2:00 am on Sunday morning with her band The Kozmic Blues Band.

While she struggled through the gig due to how fucked she was, Joplin’s performance was still considered one of the great moments of the festival. “She had been amazing at Monterey, but tonight she wasn’t at her best, due, probably, to the long delay, and probably, too, to the amount of booze and heroin she’d consumed while she waited. But even Janis on an off-night was incredible,” the Who’s Pete Townshend said in his memoir Who Am I.

You can see the impact the rain had on the festival grounds in this photo of the Redmond stage. This natural amphitheater was where all the big acts played throughout the festival. Despite the rain, tens of thousands of people gathered at the stage every day to watch the likes of Arlo Guthrie, Santana, Jefferson Airplane, The Band, and Johnny Winter. 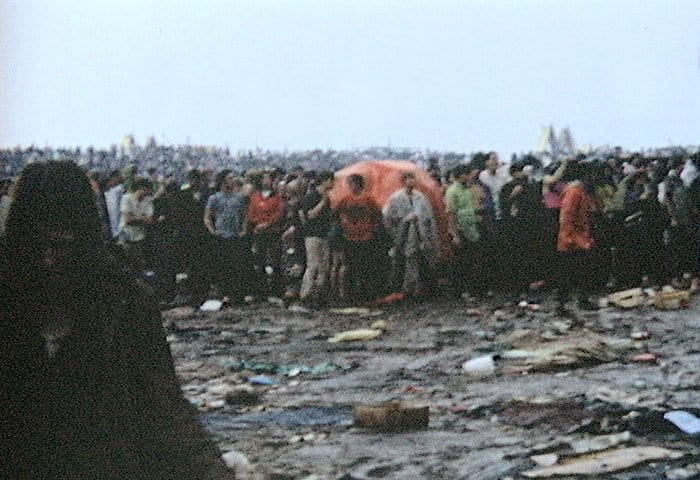 Here’s another look at the crowd gathered by the Redmond stage as they wait for the rain to end. You can see several people wearing protective gear but many punters didn’t expect the rain and were stuck wearing t-shirts and pants. 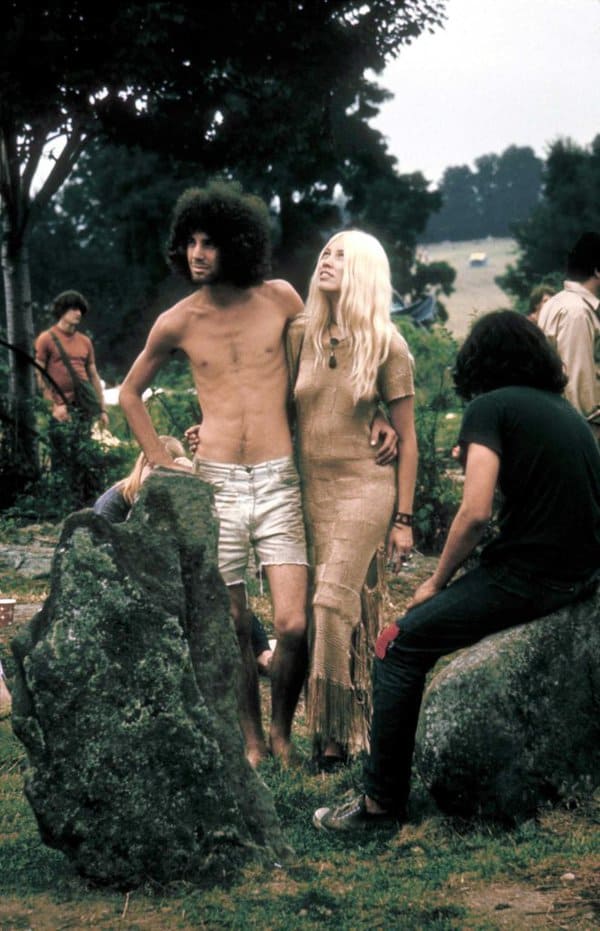 Here’s a loved-up hippie couple enjoying their time at the festival. “I like this shot of a handsome young hippie couple,” photographer John Dominis said. “They seem so comfortable with each other. A very endearing image, I think.” 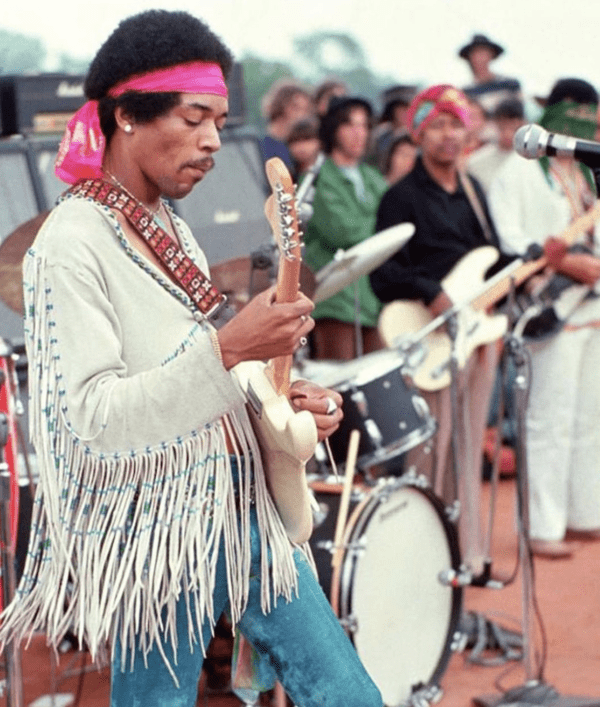 The one and only Jimi Hendrix was the final artist to play Woodstock. He came on around 9 am Monday morning and played to around 200,000 people who had stuck around for the entire festival. He played two hours filled with classic tracks, extended jams, and a rendition of “The Star-Spangled Banner” that people still get excited about. As a music fan, this would have been one of the great performances to have witnessed in the flesh. 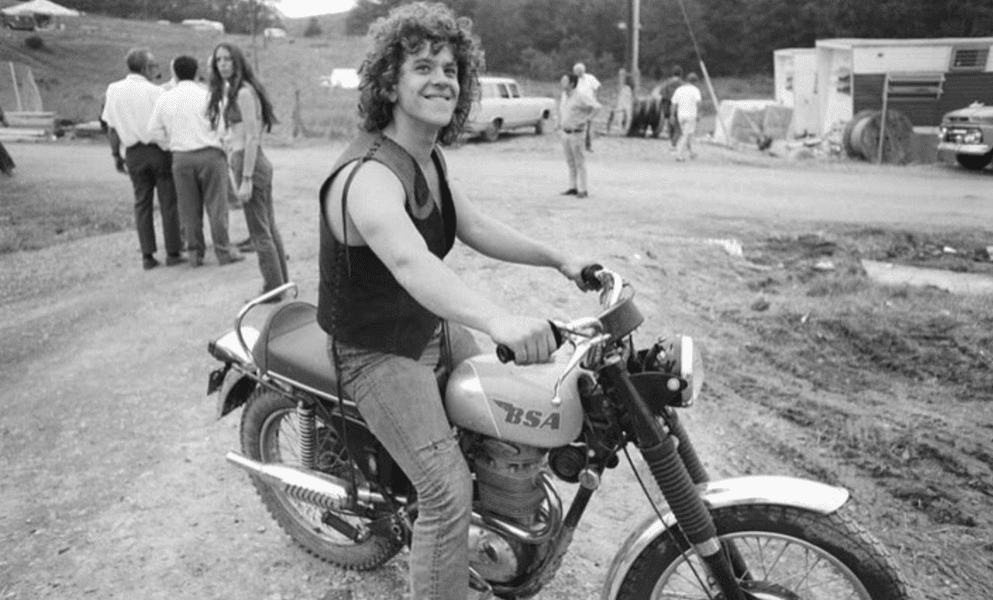 This photo is of Woodstock co-founder Michael Lang. Along with Artie Kornfeld, John P. Roberts, and Joel Rosenman, the four came up with the idea to hold a music festival celebrating the social movements of the 60s, such as music, drugs, and free love. He was featured heavily in the Woodstock: 3 Days of Peace & Music film and was often seen as the face of the festival. 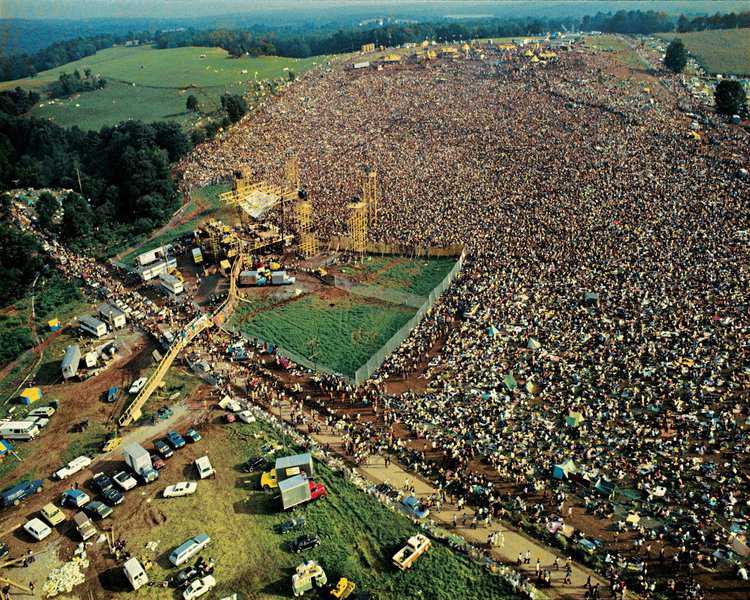 How’s the view? This image of Woodstock was taken from the air and gives a great overview of the festival grounds. It’s amazing to think 400,000 people spent three days in a field listening to music, taking drugs, and making love with few violent incidents. As we saw with Woodstock 99, something as magical as this can not be replicated.