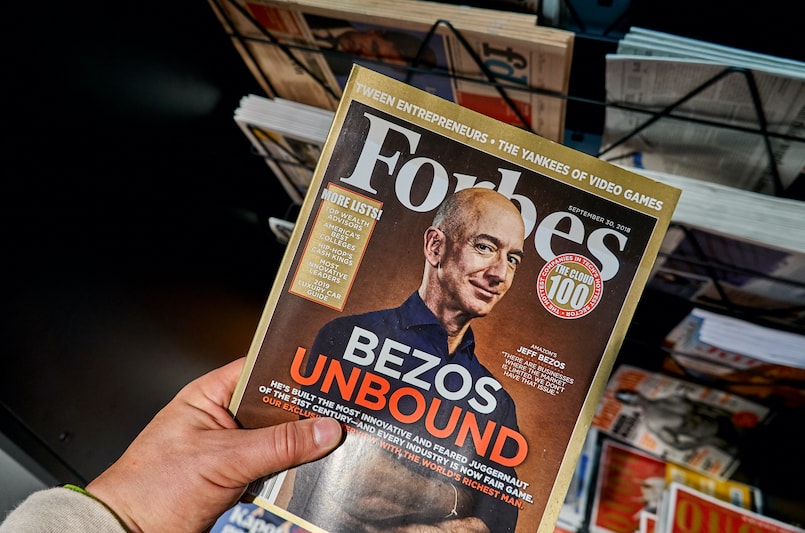 Forbes annual list of the 400 richest Americans finds the 1% continue to make bank. While many have been struggling to survive, the world’s elite has been swimming in money. There has been a massive 40% increase in wealth, from $3.2 trillion to $4.5 trillion, with nearly every person in the top 400 richer than they were in 2020. The top 20 are worth an estimated $1.8 trillion, proving there’s truth in the old adage; the rich get richer while the poor get poorer.

For the fourth year running Jeff Bezos has taken out the top spot with an estimated worth of worth $201 billion. The Amazon founder is the first person to ever creep over the $200 billion mark and is no doubt plotting world domination from his underground lair.

Elon Musk comes in second and is worth $190.5 billion, tripling his net worth since last year thanks to Tesla shares going through the roof. Facebook founder and possible robot Mark Zuckerberg is in the third spot with a net worth of $134.5 billion, narrowly keeping Bill Gates, who has a tidy $134 billion to his name, from making the top two for the first time in three decades. Goggle co-founder Larry Page rounds out the top five with a tasty $123 billion.

There has been a lot of movement on the list, with 55 billionaires dropping out and 44 appearing for the first time. Regulars such as Donald Trump and Oprah Winfrey no longer feature, while the newcomers are dominated by younger entrepreneurs.  Notable additions include 29-year-old cryptocurrency wonder kid Sam Bankman-Fried, worth $22.5 billion, and Brian Armstrong and Fred Ehrsam, the cofounders of cryptocurrency exchange Coinbase Global.

Other interesting facts include just 56 women making the list and only 14 under 40s appearing. The majority of wealth is also found in California, with 89 billionaires living there.

The most disheartening piece of information is the lack of generosity from the 400 billionaires. Forbes found that only eight people on the list have given away more than 20% of their net worth in the past year, although those who gave away less than 1% of their wealth did increase from 127 to 156.