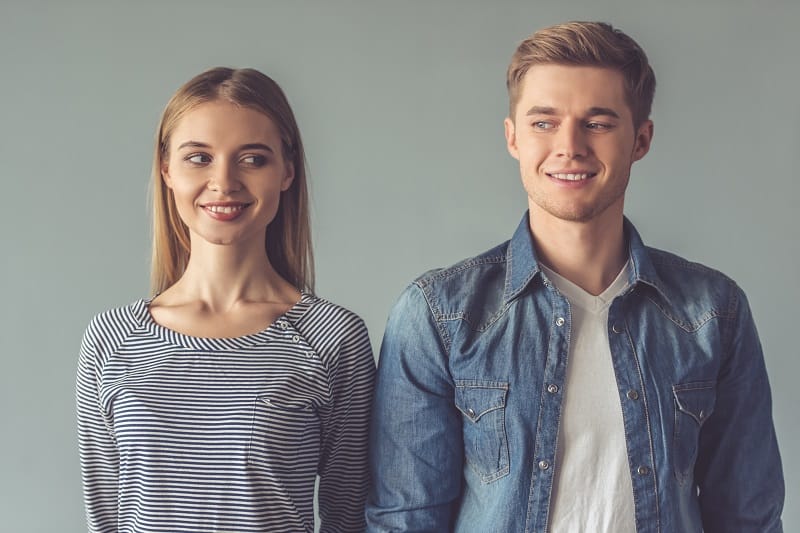 How To Tell Whether She’s Crushing on You

It can be hard to tell whether she’s into you or not without literally saying the words “I’m crushing on you”, but it takes a certain type of woman to come out with it first. Luckily, there are some signs that can help you to figure it out. Perhaps she’s a work colleague or long-term friend that you’ve started crushing on, and want to know whether she’s likely to feel the same before you make a move without being embarrassed at work or risking your entire friendship.

When women have a crush, they tend to display similar traits, which Jeanne Sullivan Billeci, The Soul Mate Coach, Dating and Relationship Expert, is going to give us an insight into, so you can feel confident about your decision to come clean. 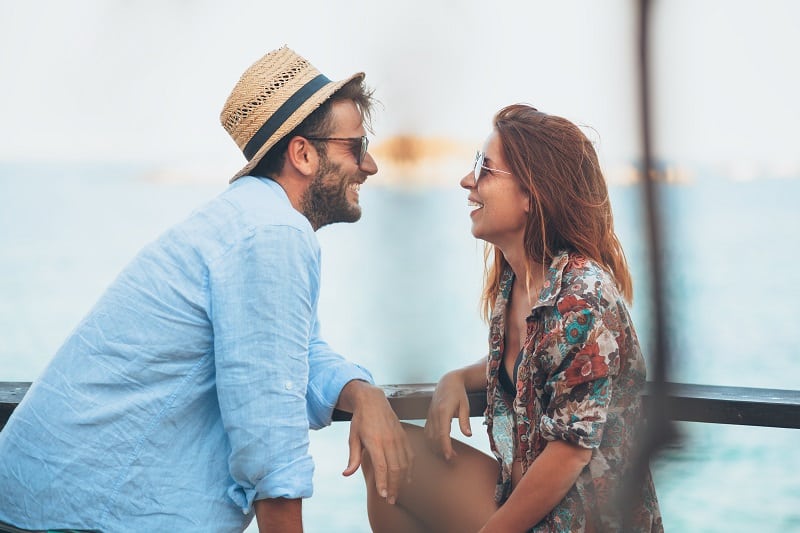 “If she’s comfortable being completely herself with you, she thinks you’re worth the risk of revealing her secret single behavior,” says Billeci. “She might invite you to her open mic comedy set, or her spoken word performance. Maybe she’ll offer to read your tarot cards or declare a kink she’s into.” Basically, if she lets you into something others may see as embarrassing, there’s a good chance she’s crushing on you.

Most women who have a crush will begin to let their guard down as a hint. Some will do it willingly to see if you like them for who they really are, while others will do it without noticing as they feel so comfortable with you. Either way, it’s super flattering and you should feel honored. To let her know you’re into her too, Billeci recommends that you show genuine acceptance and reciprocate by flying your freak flag, this way she’ll feel safe and melt.

She’s Always Looking for an Excuse to Touch You 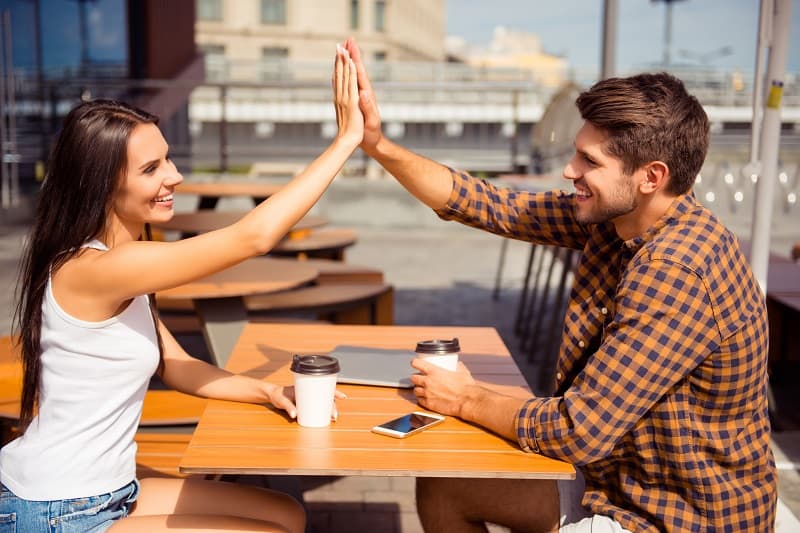 Billeci explains that if she’s interested, she’ll find little ways to touch you in flirty ways without being overtly sexual. If she really likes you, she’ll worry that sleeping with you right away, even if she wants to, will hurt your chances of a deeper connection.

“Instead, she’ll touch you in more casual, gentle ways, like a touch on your knee as she shares a secret. Or a touch on the shoulder when she passes you on the way to the bar or ladies’ room.” She might even playfully nudge your foot under the table or sit close and touch your hand or arm when talking with you.

If you’re not into someone, touching them is the last thing you want to do, right? So, if she’s constantly touching you, she’s probably crushing on you.

She’ll Show Her Playful Side 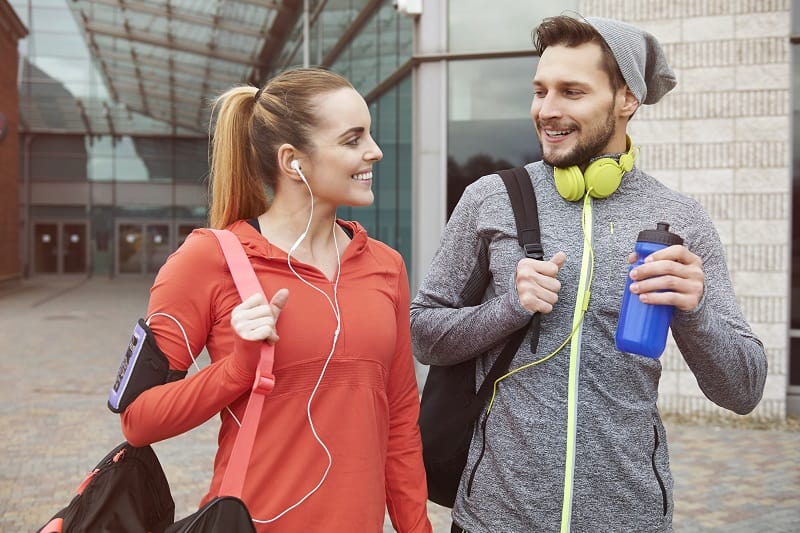 If she’s into you, she’ll look for ways to be playful with you. “This can show up as share her goofy side, from silly jokes to funny accents she does and favorite impressions,” says Billeci.

“She might sneak up on you and put her hands on your eyes while you’re waiting for her or tag you and run when you’re hiking—inviting you to chase her.” She wants you to know that she’s fun to be around and keep you coming back for more, and what better way to do that than being playful?

She’ll Allow Herself To Be Vulnerable With You 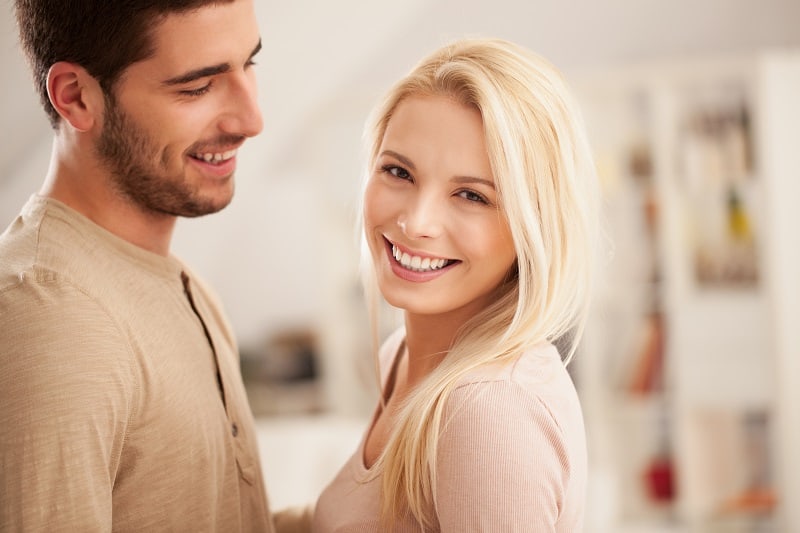 “When a woman feels safe enough to open up, that’s a really good sign,” explains Billeci. “She might share her bad day at the office, or an argument she had with a friend. Maybe she’ll share her most embarrassing moment, or something she learned from a mistake she made.” You can score points by just listening and showing empathy or judgment.

Unless she asks for advice, avoid trying to offer solutions. Women usually just want a sympathetic ear so they can vent and let go of what happened. Treating you like one of her girlfriends isn’t always a sign of being in the friendzone, unless she actually calls you “one of the girls” – that’s pretty hard to flip 180. But many women want to be friends first and foremost before becoming lovers as it helps them build trust and see longevity. Some of the best love stories have blossomed from a solid friendship.

She’s Always Laughing Around You 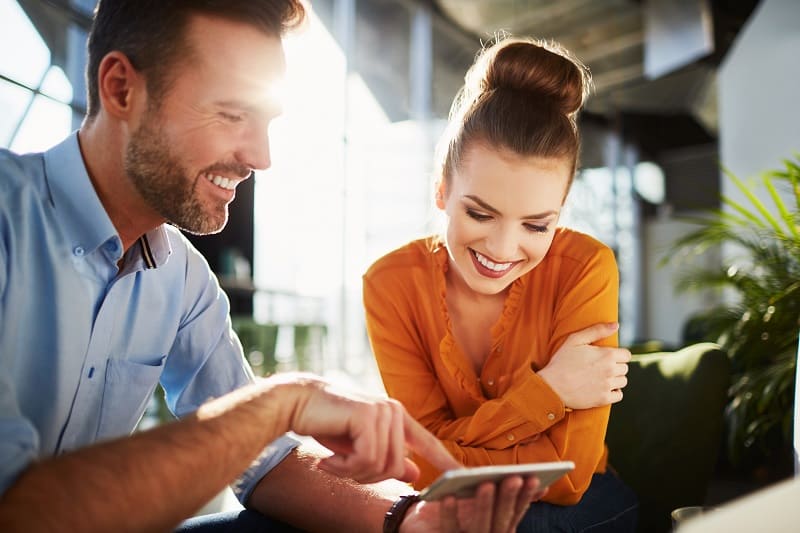 A compatible sense of humor is one of the most important things women look for on dates, says Billeci. “If she downright snorts or cries when she laughs at your amusing stories, she’s loving your humor.” But if she’s serving up a polite smile that doesn’t reach her eyes, and seems like she’s faking it, she almost definitely is.

The type of laugh Billeci wants you to look for you can’t fake. Think real uncontrollable laugher where she struggles to stand up straight or get her words in. If you can make her laugh like this, she’s probably crushing on you. Bad. Anyone who can make a woman laugh like that is super hard to resist. 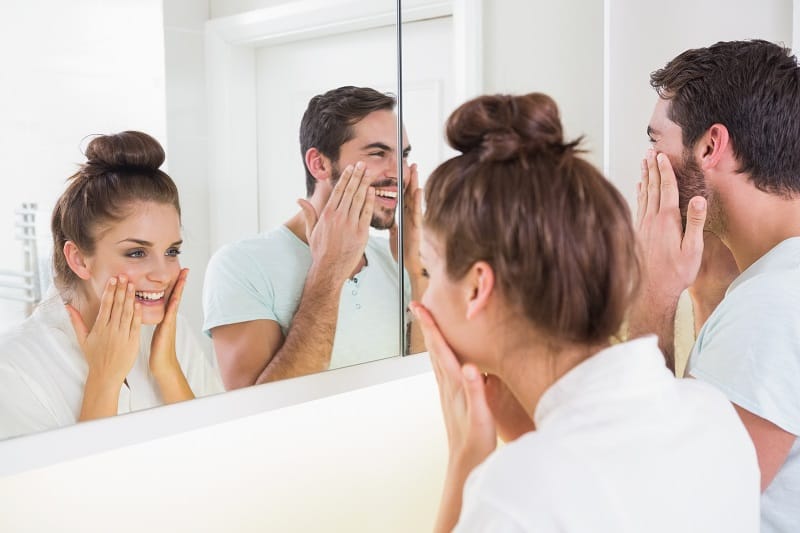 Imitation is the greatest form of flattery, after all. “If she is unconsciously mirroring your gestures, movements, or body posture, she is genuinely engaged in the conversation and wants to be in sync with you,” says Billeci. When we mirror someone, we’re often unaware of when we’re doing it, but if you consciously watch your actions around your crush, you’ll find yourself copying her.

She might cross or uncross her arms and legs, or smile, tilt her head and lean in as you do. Billeci says that she could also match your behavior in other ways such as your voice tone, accent, or words.

Test it out and make some subtle movements to see if she copies you, and if she does, now’s the time to make your move and let her know you’re crushing on her. If she’s been mirroring you all evening, she’s likely to feel the same way about you too.

She Introduces You To Her Friends 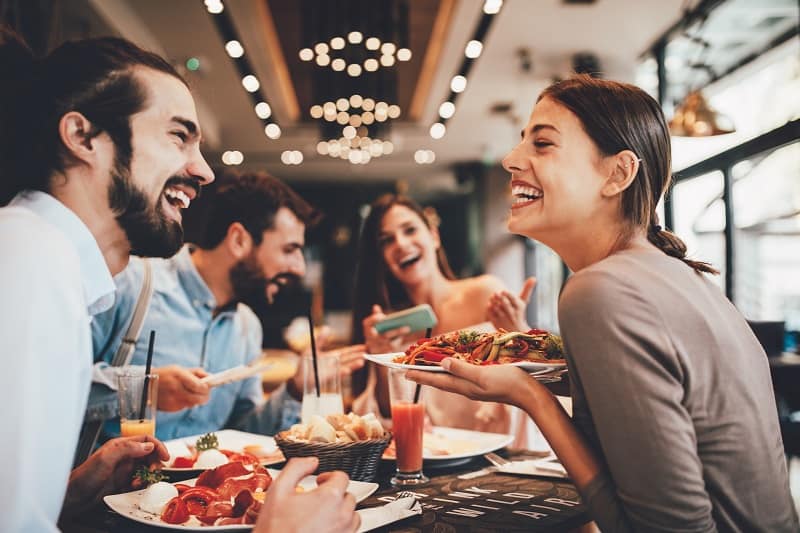 Women share everything with their girlfriends from what pair of knickers they’re wearing out later to the guy they fancy. “If she tells you her friends want to meet you, or that you’d love her friends, you’re in,” says Billeci. “It means she trusts you enough, and likes you enough, to pass the friends’ test.” She suggests going in with an open mind and heart and you’ll win the friends over, which is a big bonus. If you shut down when she asks, worrying about expectations and the seriousness of it all, you’ll lose a lot of points, even if she tries to make it seem like it’s not a big deal.

Many men tend to freak out about meeting a woman’s friends, but it’s never as big of a deal as they think it is. It just means that she likes you enough to want to have you as part of her social bubble and to see whether or not you’d fit in. It’s meeting the parents you want to watch out for, but even then, if she’s super close with her family, sees them all the time, and considers them part of her social bubble, you can relax.

She’s Curious About You and Asks Lots of Questions 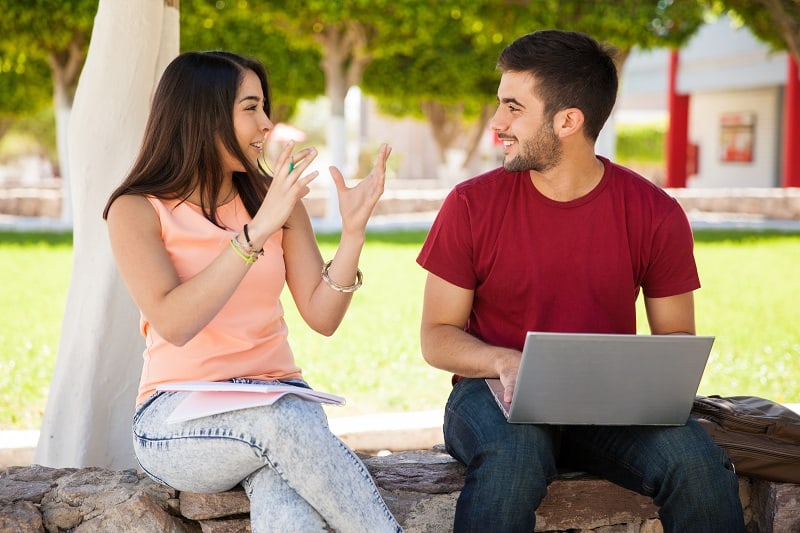 If she’s not crushing on you, she won’t be curious enough to ask questions about you. Put bluntly, she simply wouldn’t care to find out anything more than you tell her. “If she asks questions that show genuine curiosity about your interests, passions, and values, she’s on her way to being hooked,” says Billeci. “She wants to understand who you are and whether her attitudes and lifestyle can align with yours.”

If she focuses more on status-related questions, like what you drive, whether you rent or own, or how much something costs, she’s more interested in what you can offer instead of you – watch out for these tell-tale signs that she’s a gold digger. If she doesn’t ask questions about you, or constantly brings the conversation back to her, she’s only into herself.

She Asks You for Help 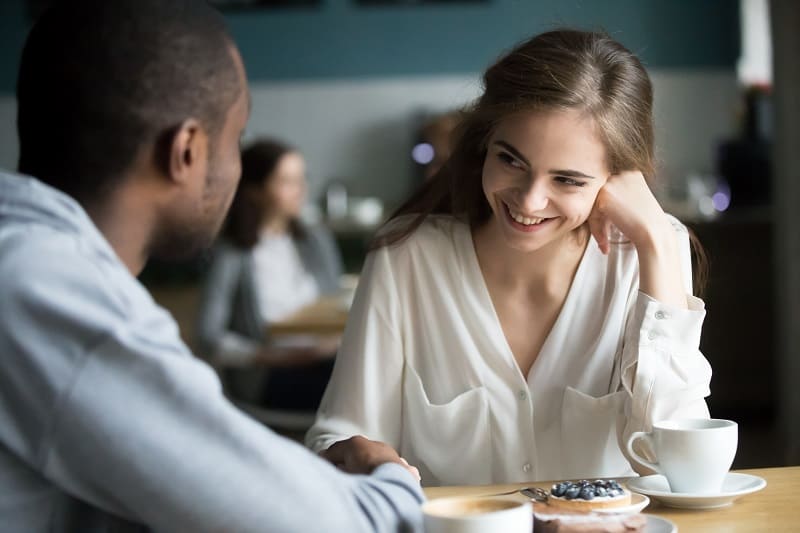 If you’re her go-to guy and the first person she thinks of when she needs a helping hand, it could be a sign she’s crushing on you. It goes back to her allowing herself to be vulnerable around you. If you’re the one she calls in distress, it’s clear you’re on her mind even at the worst of times.

Even the most independent women understand that men like to feel needed, so they might ask for help even if they don’t really need it, explains Billeci. They might ask you to teach them something technical, give them a lift or help them reach something. Even strong women want to know a man cares enough to help them out, whether it’s assisting with a project she’s behind on or helping her fix something she’s clueless about. When she asks for help, and you deliver, she’ll crush on you even harder.

She Makes Time for You in Her Busy Schedule 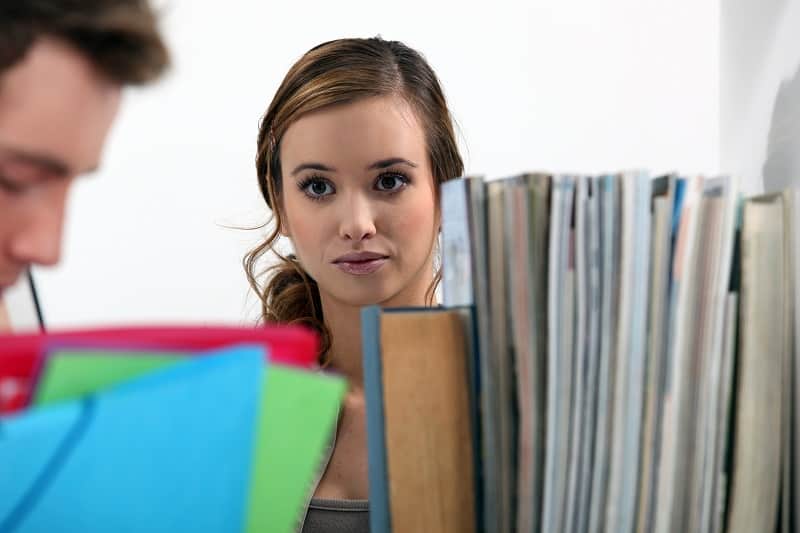 No one’s too busy. Fact. We just all have different priorities and make time for those. “If she is busy but makes space for spending time with you, she really likes you,” says Billeci. “If she can’t see you for a few days because of work or other commitments, she will make a point of setting a date when she can see you, sending a flirty text during the week to let you know she’s thinking about you.”

Be sure to let her know how much you appreciate her moving her schedule around to see you, even if it’s just an hour or two, as it’ll make her want to do it more often. She won’t want to hang out with a guy who makes her feel bad about having her own life.

See more about - 25 Essential Pieces Of Dating Advice For Men