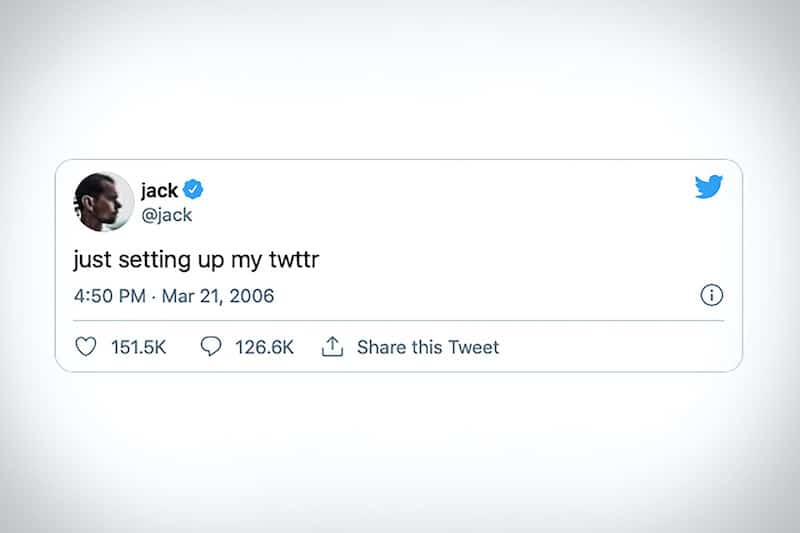 Twitter CEO Jack Dorsey is selling his very first tweet as an NFT, with the current bid sitting at $2.5 million. What the hell is an NFT, and why the hell would anyone want to buy a tweet? Well, let’s see if we can figure that out together.

Nearly two decades ago, Jack Dorsey sent out his very first tweet on March 21, 2006. Posting to an empty echo chamber, Dorsey tweeted, “just setting up my twttr.” Now in 2021, Dorsey is offering one lucky individual the chance to own a piece of social media history.

Following Dorsey’s Square $297 million TIDAL takeover, his first tweet is up for auction as an NFT, or Non-Fungible Tokens, on the platform Valuables. The highest bid at the time of writing was $2,500,000 by Sina Estavi, the CEO of Bridge Oracle. Much like a digital piece of art, NFTs are considered one of a kind. They are officially verified by the original sender, making it a highly collectible and non-exchangeable asset.

just setting up my twttr

An NFT is a verifiable digital asset vouchsafed (yes, that’s a word) by blockchain technology. NFTs are not exchangeable, unlike currencies that are interchangeable and divided into smaller fractions. Because each NFT is unique and can’t be replicated, they are considered non-fungible. To verify the validity and prevent counterfeiting, each NFT is tracked via the same blockchain technology used by cryptocurrencies like bitcoin, which links the ownership and transactions around a particular NFT to an information database.

Hosted on Valuables by Cent, the platform’s founder compared the ownership of Dorsey’s NFT tweet to that of a piece of physical memorabilia. “Owning any digital content can be a financial investment,” it says on the website. “[It can] hold sentimental value. Like an autograph on a baseball card, the NFT itself is the creator’s autograph on the content, making it scarce, unique, and valuable.”

In the case of Jack Dorsey’s first tweet, whoever casts the winning bid, Valuable by Cent will also present them with “a digital certificate of the tweet, unique because it has been signed and verified by the creator.” The winner will also take home the metadata from the original tweet, which includes “when the tweet was posted, what the text contents are of the tweet, the timestamp of the tweet, and the digital signature from the creator’s crypto wallet address.”

From there, the owner of the NFT can choose to resell, display, or just keep it to themselves. But aside from the obvious monetary value, why would you want to own an NFT? Well, as the Valuables FAQ reads, “owning any digital content can… hold sentimental value and create a relationship between collector and creator”. But at over $2.5 million, is it worth it?