1960s men’s hairstyles were a continuation of what the 1950s era had produced. When it comes to hairstyling, the 1950s era was very conservative. However, the next decade saw a transformation of men’s hairstyles from old-fashioned to free and more fashionable hairstyles.
However, it is worth noting that the 1960s era didn’t reinvent the wheel, but added on to the already existing ‘50s hairstyles to make them look more stylish.

So, there were so many hairstyles produced in the ’60s. Those haircuts weren’t confined to specific skin color or hair color. The hairstyles looked better than those produced in the ‘50s era. However, they still reflected some of the obscurantism of the ‘50s and gave a snapshot of the impending liberal freedom.

In this piece, we have compiled 19 of the best 1960s men’s hairstyles. The 1960s were an efficacious era in the men’s hairstyling world. Some of the hairstyles we will highlight here still resonate with most men even today. Take a gander. 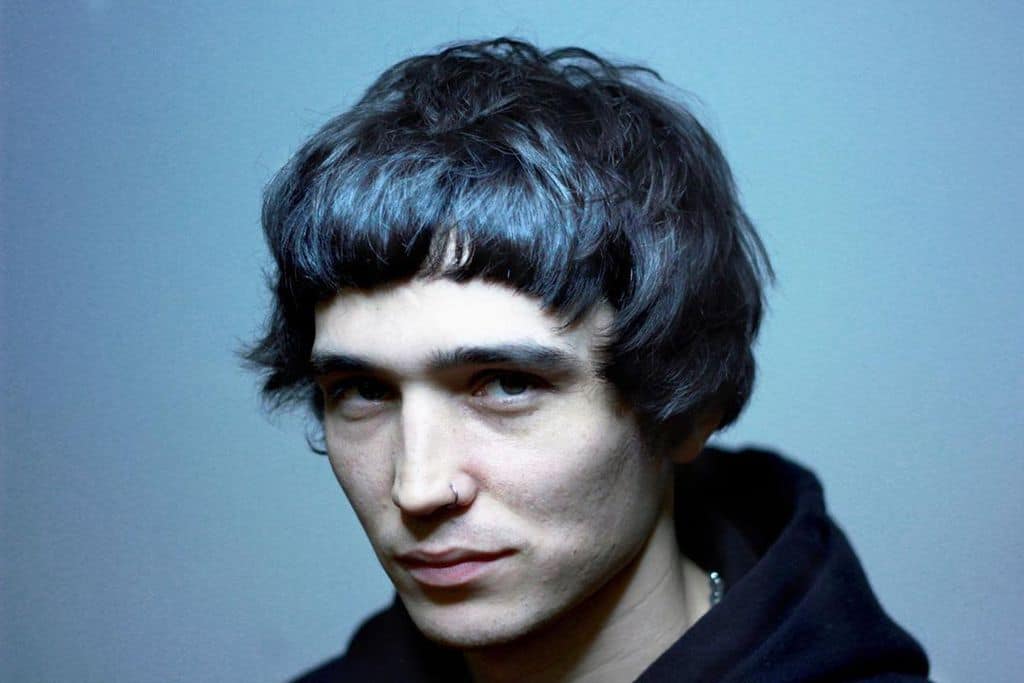 Without a doubt, the most radical and iconic hairstyle for men in the ‘60s. This men’s hairstyle was made popular by the band The Beatles. Further, the hairstyle was championed by rock groups of the time such as The Doors, The Rolling Stones and Herman’s Hermits.

A mop-top featured long fringe styled perfectly slightly above the eyebrows. The hair on the sides reached the ears, and that at the back hang down to the shirt collar. The mop-top came to limelight in 1961, when Paul McCartney and John Lennon were walking in the streets of Paris and saw it. They liked it and decided to have their hair cut to look like the cut they saw.

Nowadays, the mop-top haircut is still much alive, and pop stars such as Justine Bieber sport it on various occasions. However, his is an enhanced version of the mop-top cut. 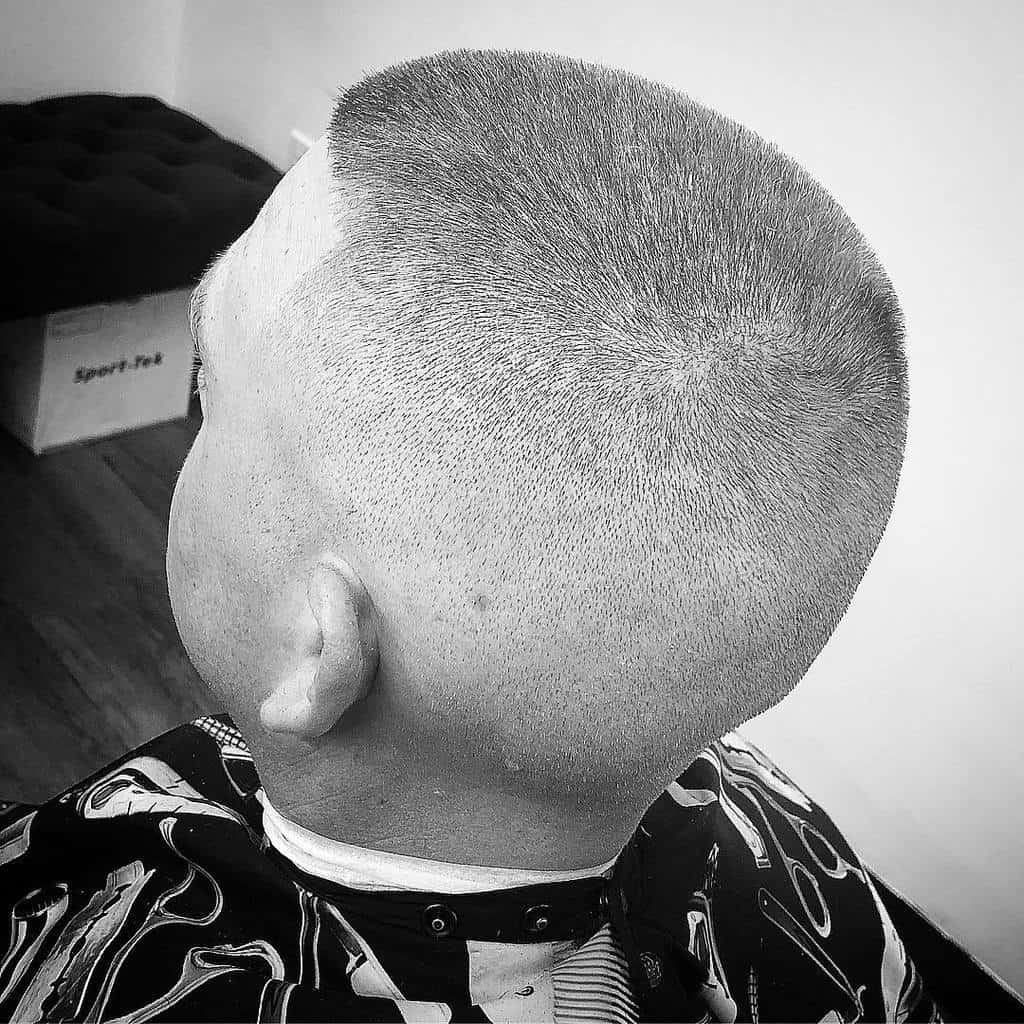 From business people to young men, this hairstyle from the late 1950s was a wholesome and tidy haircut. The hairstyle is achieved by the use of clippers to fade the hair on the sides and back while leaving the hair on top slightly longer. It is still a mainstream haircut on most barbershops across the world. It is quick and easy to style. Also, when it comes to maintenance, it doesn’t come second.

The crew haircut, popularly known as ‘flat-top,’ has the hair on top trimmed flat to give an effect of a ‘buzz cut’ where the tresses are cut as close as possible to the head. Six decades later, and this men’s haircut is still considered one of the best haircuts for professionals, conservative guys, both teens, and men. 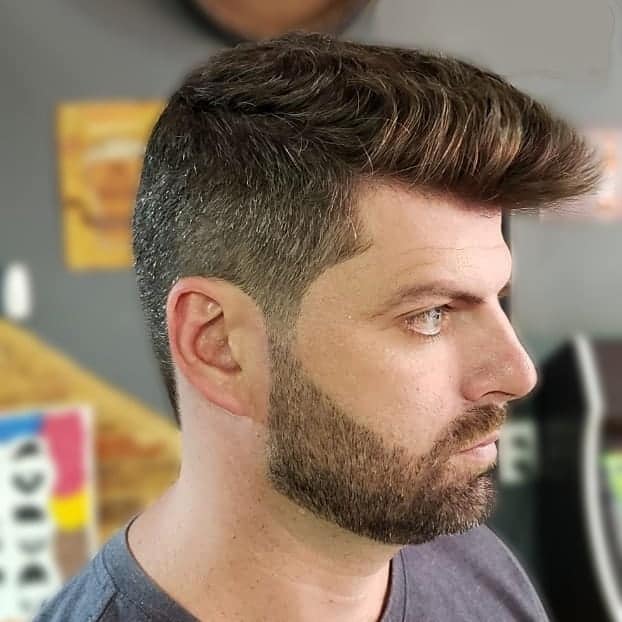 Popularized by legends such as John Cash and Elvis Presley, the rockability look, also popularly known as ‘pompadour’ had big moments in the 60s. The hairstyle features swept up hair in the front and perfectly styled manes on top and sides. The haircut was first sported by musical artists in the mid-’50s and early ’60s and was quite popular and unique thanks to the charisma of the musicians who rocked it.

The hair was kept slightly longer on top than that at the back and the sides. However, the front hair was swept up to avoid distracting the sight. The rest of the hair was styled using beeswax to give it shape and some composure. 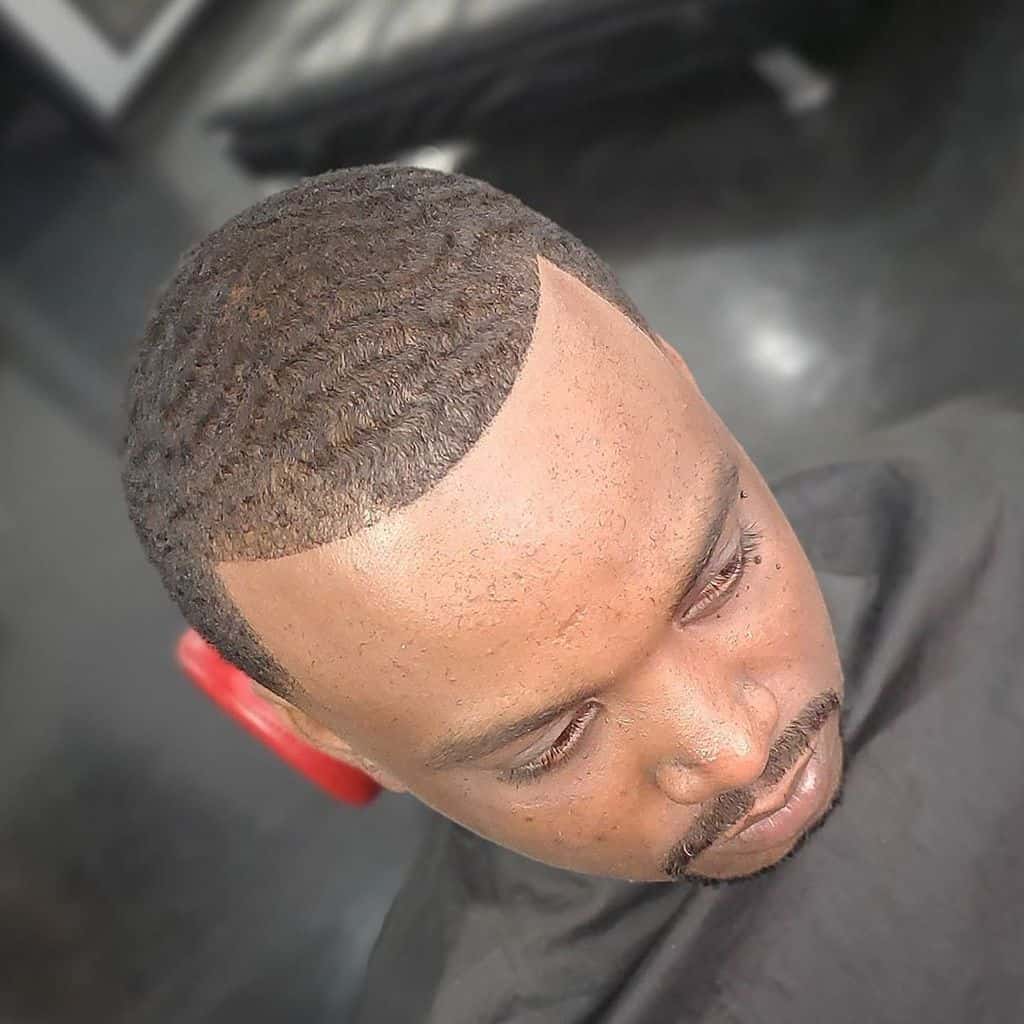 The 1960s witnessed an unpreceded shift in the men’s hairstyling. This change included African American hairstyles that were gaining more acceptance among the African American guys. As opposed to the 1940s and 1950s, in the 1960s, musicians started rocking these hairstyles on stage, and they made names for themselves. Some of the common styles were simple straight locks waved back and oiled up. There were also short haircuts such as buzz cut that was very common among conservative men.

5. The Executive Slicked Back Haircut 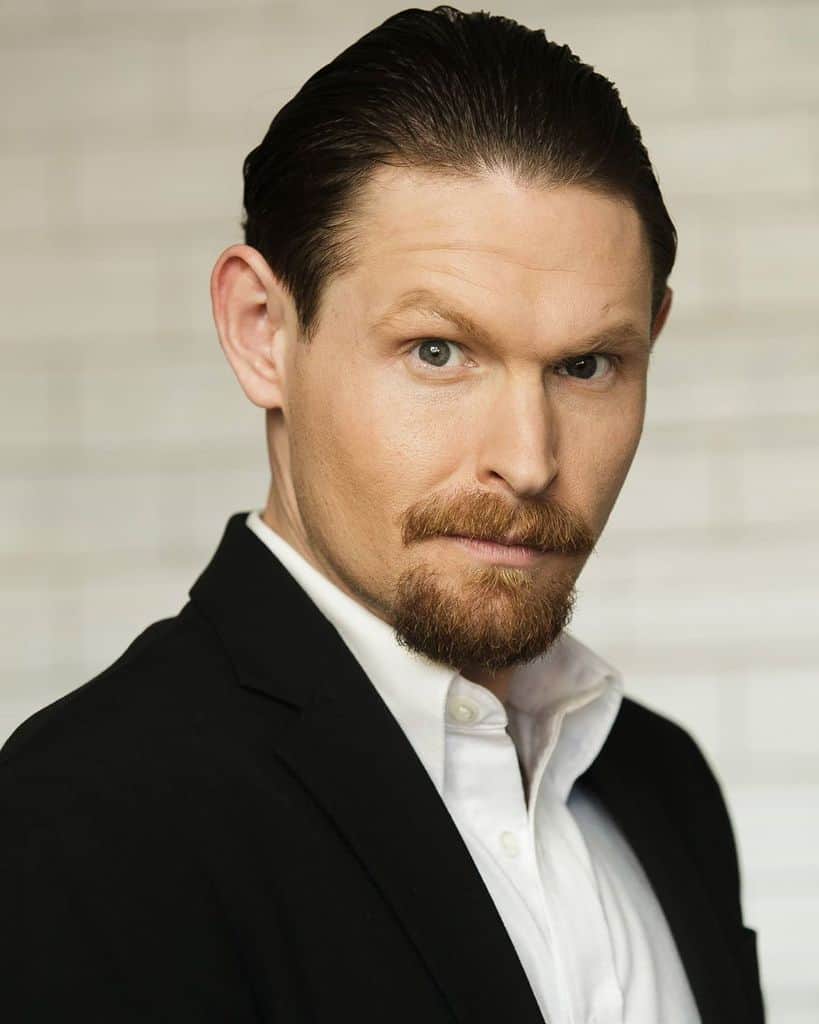 Professional hairstyles were very popular in the late ’60s. Both young men and grown-up men wanted to rock one and imitate male heroes such as Sean Connery and James Bond. Many men ditched their hats and started wearing business haircuts such as the Ivy League cut. The Ivy League was a popular haircut among the most American middle-class young professionals. 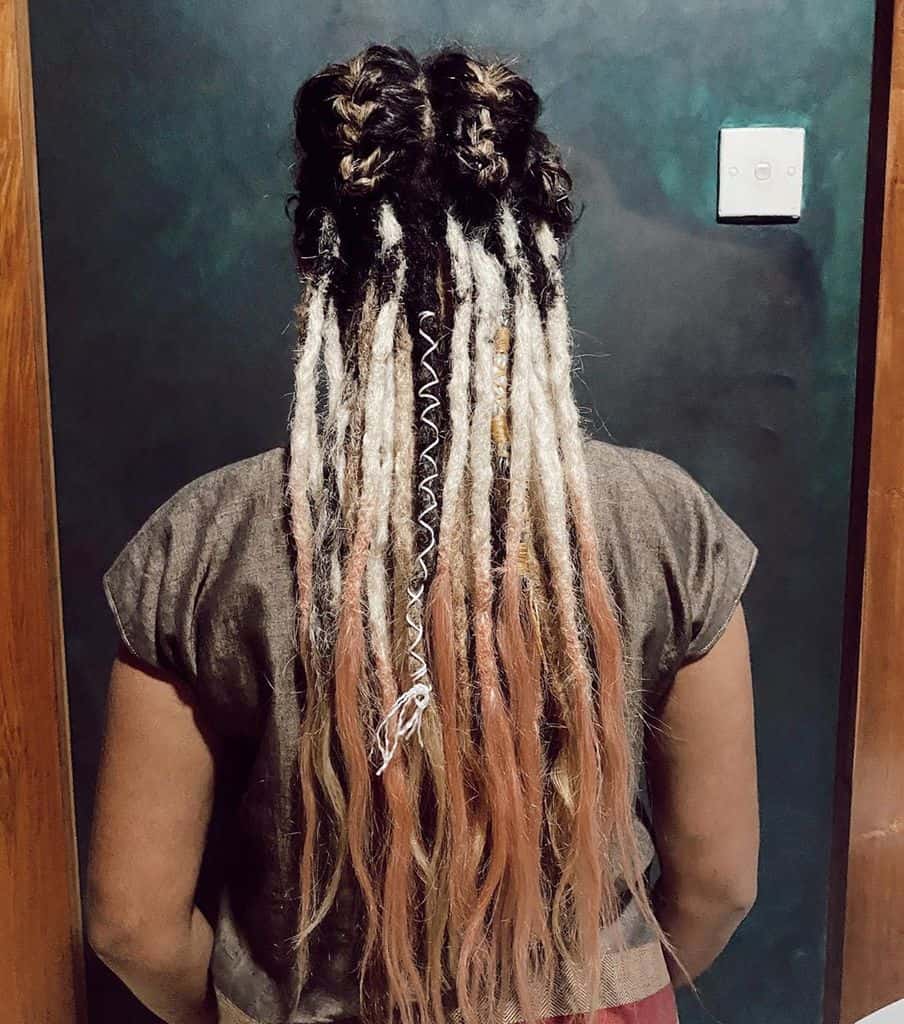 The hippie hairstyle came in the late ’60s as a counterculture to respond to the Vietnam War. It was mostly worn by the proponents of freedom, love, and liberty, which were represented by patterned and colorful garments on their locks. This hairstyle featured long and messy locks. The hair was let to flow naturally and freely. Besides, it was worn by both men and women to express their values. 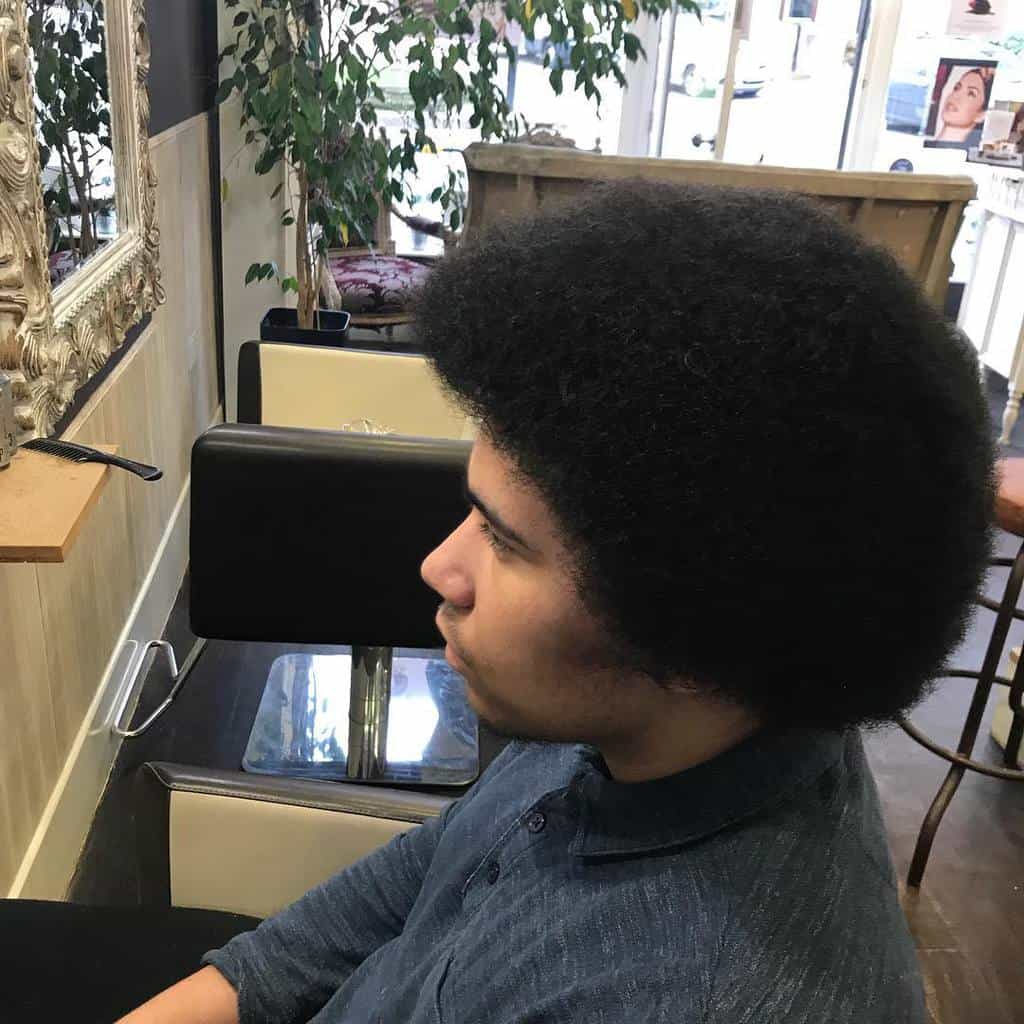 As guys became more enlightened about different hairstyles and started exposing their hair and ditching hats, this trend also resulted in new and extreme hairstyles. One of those extreme hairstyles that came up was the freedom afro. It was in the group of long haircuts and was rocked by African American guys as a sign of pride and freedom. They also wanted to showcase their high and long hair. 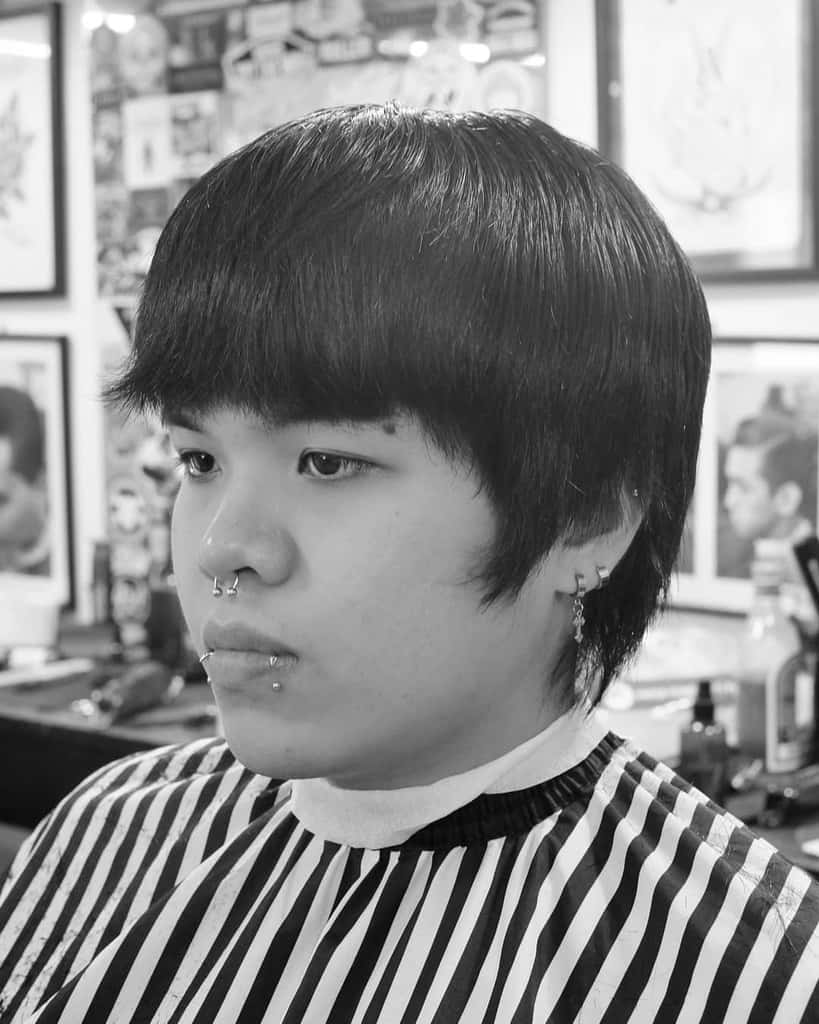 The 1960s era offered men with all types of hairstyles, including the daring ones, for those guys who never bothered to include a unique element in their styles. There were some geometrical hairstyles for brave men to choose from, and this long geometrical cut was one of them.

To style this unique look, you needed to grow out the hair at the back to reach the shoulder length and then trim the hair on the sides in triangular shapes around the ears. The bangs were trimmed thick and styled perfectly slightly above the eyebrows. Thanks to its uniqueness, this hairstyle for men continued until the early ’70s, but this time it included more texture on top. 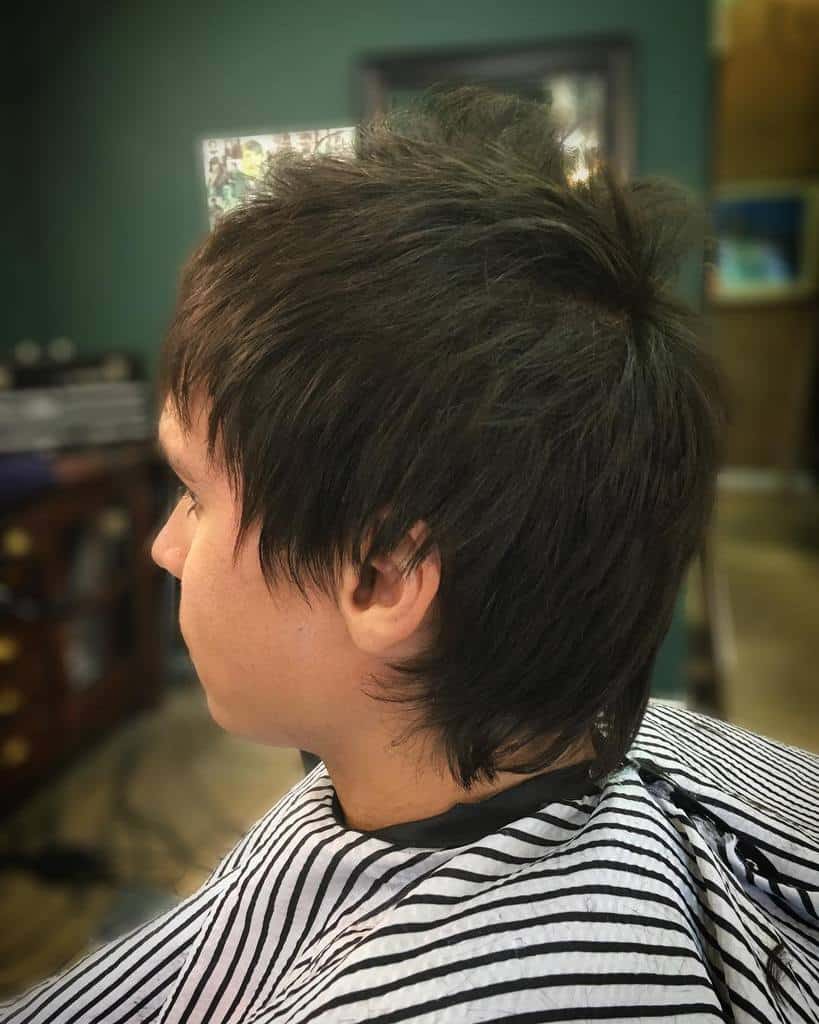 The Beatles haircut defined the trend in men’s hairstyles. However, after some time, this haircut paved the way for more classic haircuts, and one of these hairstyles was the shag haircut. It was a straightforward and highly textured haircut that many men loved, partly because of its simplicity and also because of artists who rocked it, such as John Lennon.

The hairstyle featured messy and shoulder-length locks. Its sexiness lies in its hassle-free form of styling that is messed out, making the look appear quite natural and relaxed. The top hair on top is combed and side-swept to give an entire look an asymmetrical vibe. 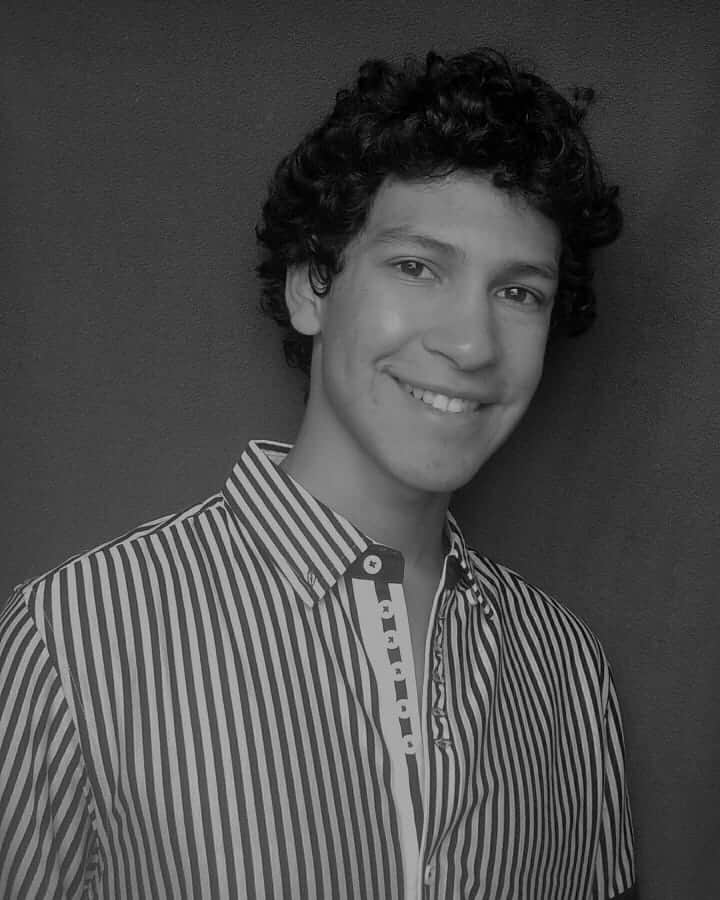 Undoubtedly, there were some retro 1960s men’s hairstyles. One of these hairstyles which won the hearts of stylish men in ‘60s was the short and curly hairstyle matched with a finely cut mustache. The hair length was kept uniform all over and then ruffled to create a messy look. 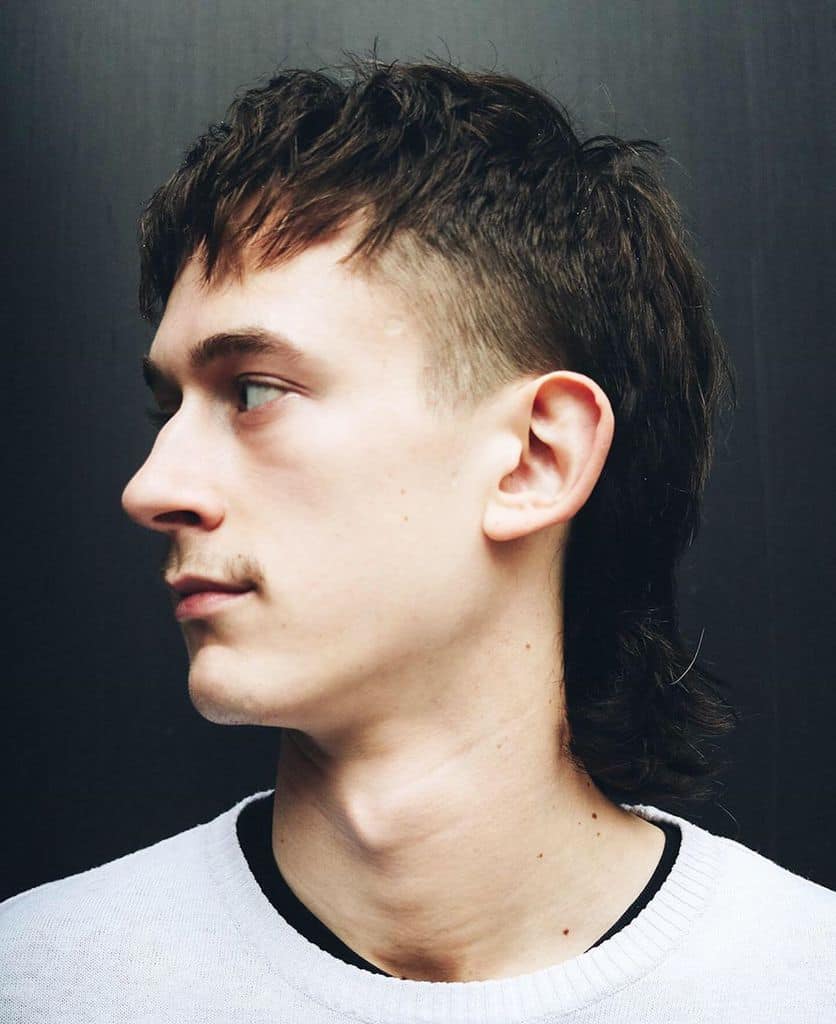 Timeless and iconic, the mullet was one of the best 1960s men’s hairstyles. It was sported by Paul McCartney in the late 1960s and remained so popular until the mid-1970s. The mullet was in the category of long hairstyles. However, unlike most long hairstyles that included a lot of layers to add volume, the mullet didn’t include layers apart from the top layer. The top layer was kept slightly shorter compared to the rest of the locks, but it was a bit ruffled. Some men also opted to perm their mullet and part the bangs in the middle. 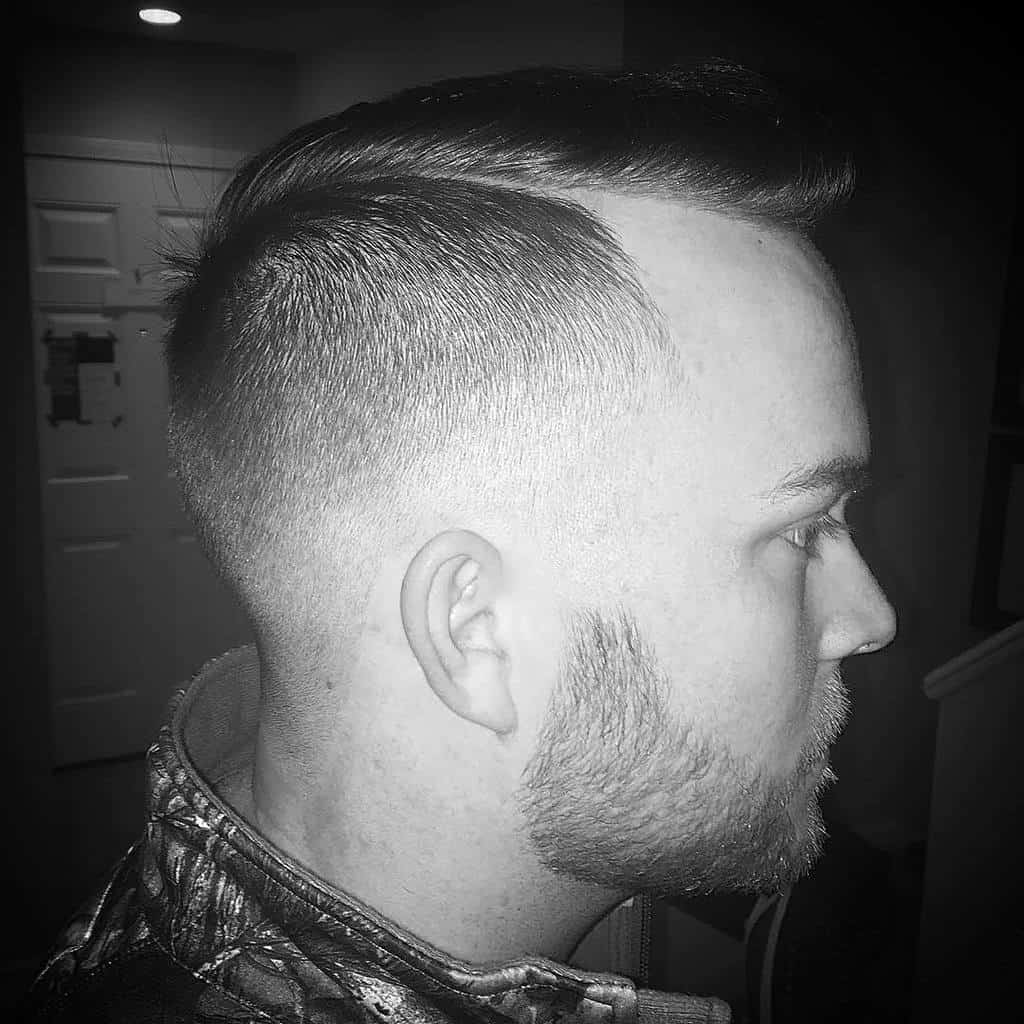 Still a popular men’s hairstyle today, the hard part comb over was a big deal in the 1960s. Men rocked simple, classic, and tidy haircuts. To rock this look, the hair was first parted on one side and then brushed towards the opposite side. More textured hair was left on top and the front. To give the hair shape, a little beeswax was applied. The styling of this hairstyle has not changed so much; only the products have changed and possibly the length which one can style a comb-over. 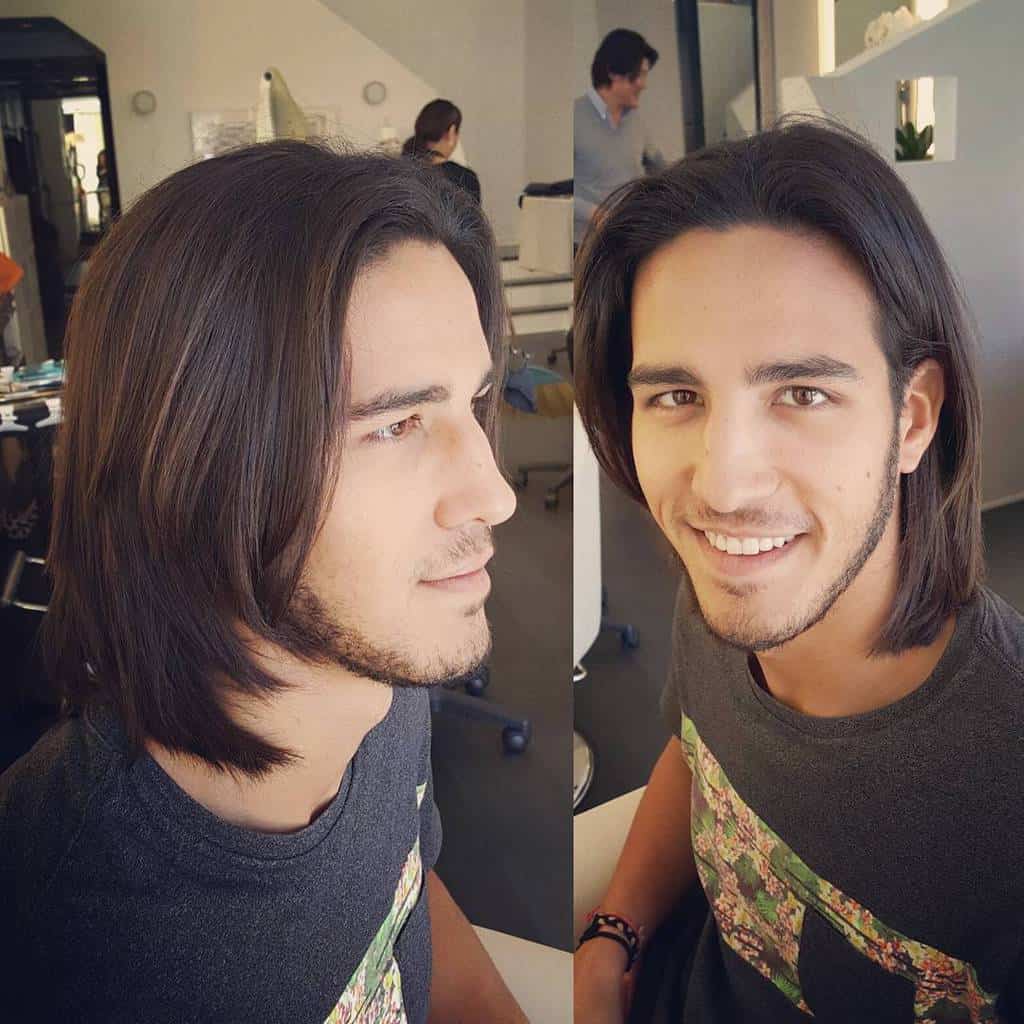 Long hairstyles were quite common in the 1960s. This hairstyle featured shoulder-length hair with a lot of texture. Besides, it had a long layered fringe that was parted in the middle. Top hair was kept messy to add volume to the entire style. 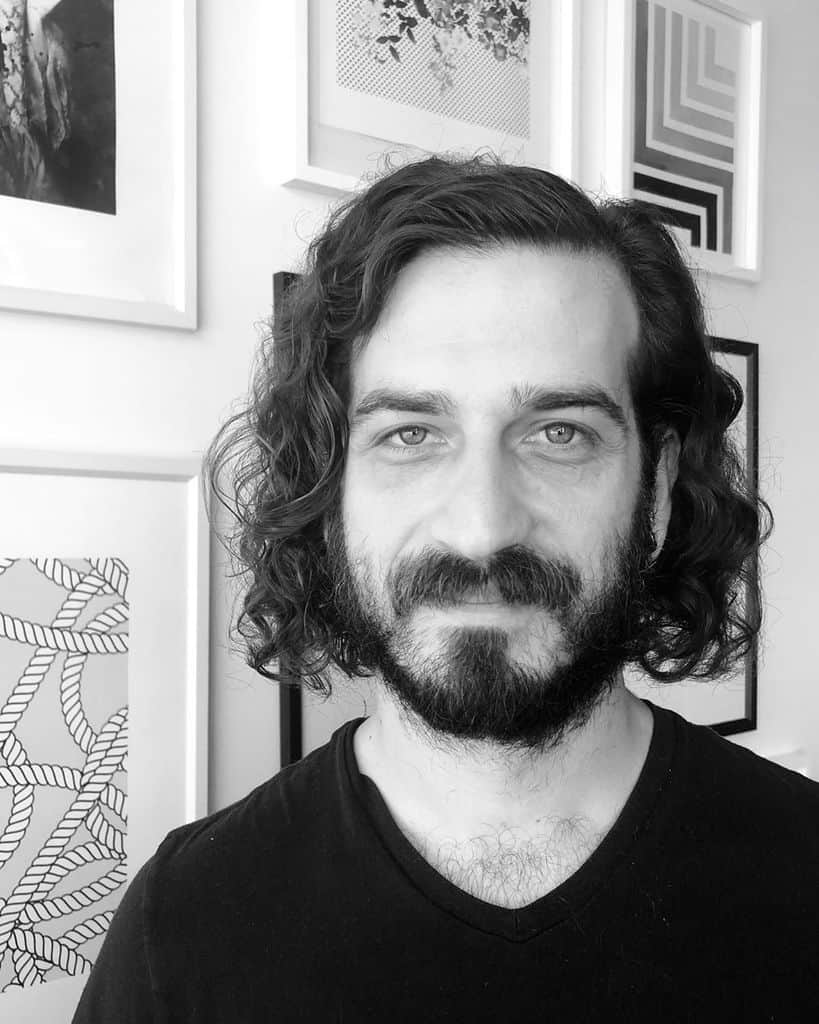 Whether you were old or in your mid-forties, this long curly hairstyle gave you a youthful vibe. This 1960s men’s hairstyle maintains the natural form of your hair while being easy to style and manage.

To rock this look, you would want to cut your locks shoulder-length and leave the curls messy and loose, both on the sides and on top, especially on the forehead. 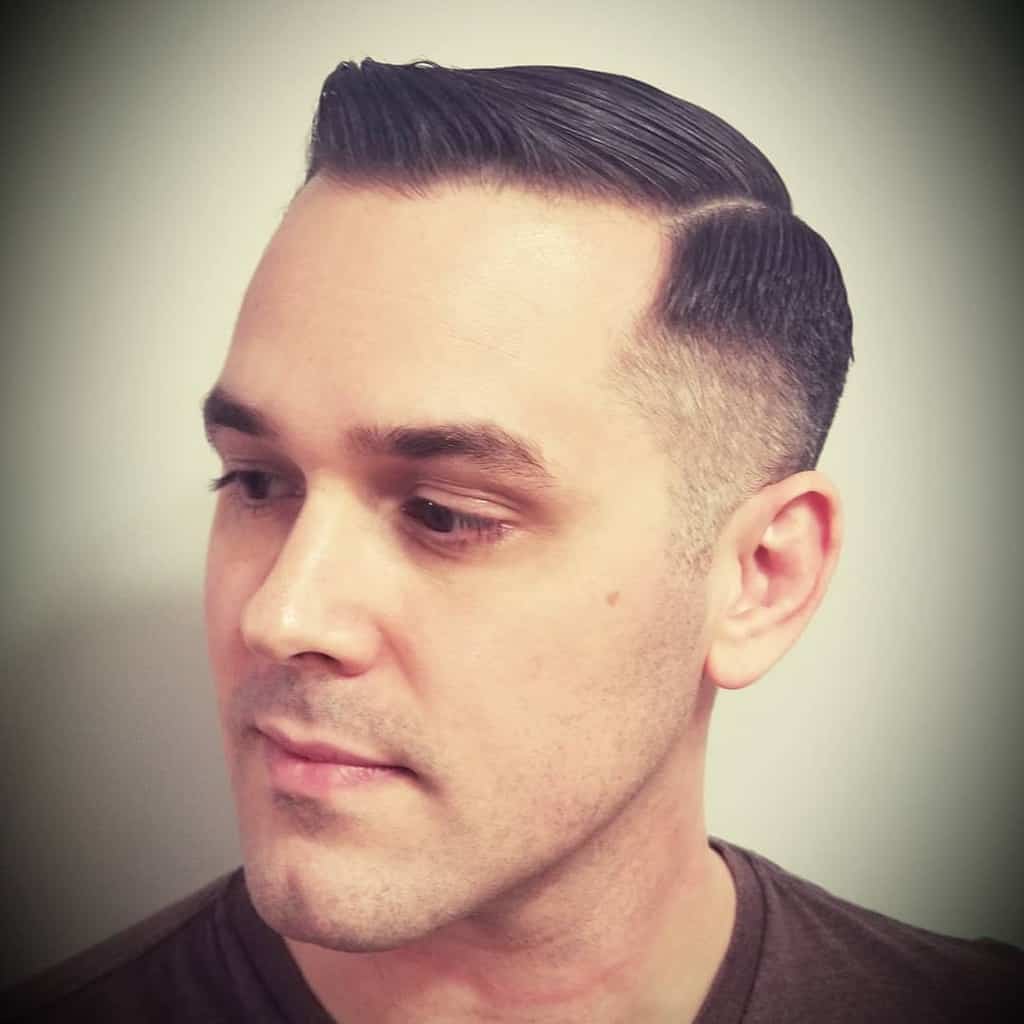 One of the best 1960s men’s hairstyles. It was one of the favorite styles among old school Hollywood stars. And if you thought this classic short comb over ended in the ’60s, you will be surprised to know that it remained throughout several decades, and it is still rocked nowadays but with some improvements.

The popular ‘60s men’s haircut features combed over hair, and a side part styled firm by use of a hair gel.

When it comes to men’s hairstyling and fashion, the 1960s era can be termed as an era when the hell broke loose, and men started embracing long hairstyles freely. It was an era of ‘let it all hang out,’ and really, that is what it was. There were lots of styles of long hair with different shapes and forms.

For instance, this hairstyle featured long locks with bangs that almost covered the entire forehead. It was a hairstyle that had a significant impact on how men wore long hair. Thanks to the charismatic vibe of the artists who wore it, its popularity continued up to the early ’70s.

17. Messy Haircut with Slicked Hair on the Sides 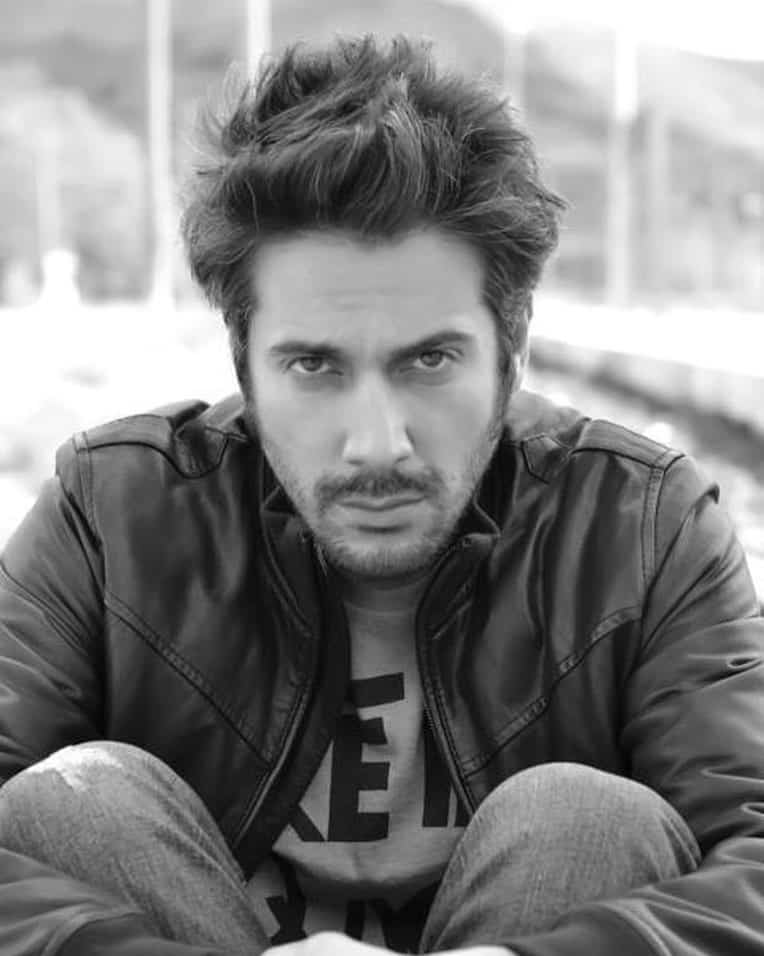 Suitable for both office and casual settings, this haircut was famous throughout the 1960s era. To rock this haircut, you needed to grow out your hair a bit longer and slick the hair on sides using a quality gel. The manes on top were left naturally shaggy and voluminous. Also, the sideburns are slightly longer than the hair on the sides. 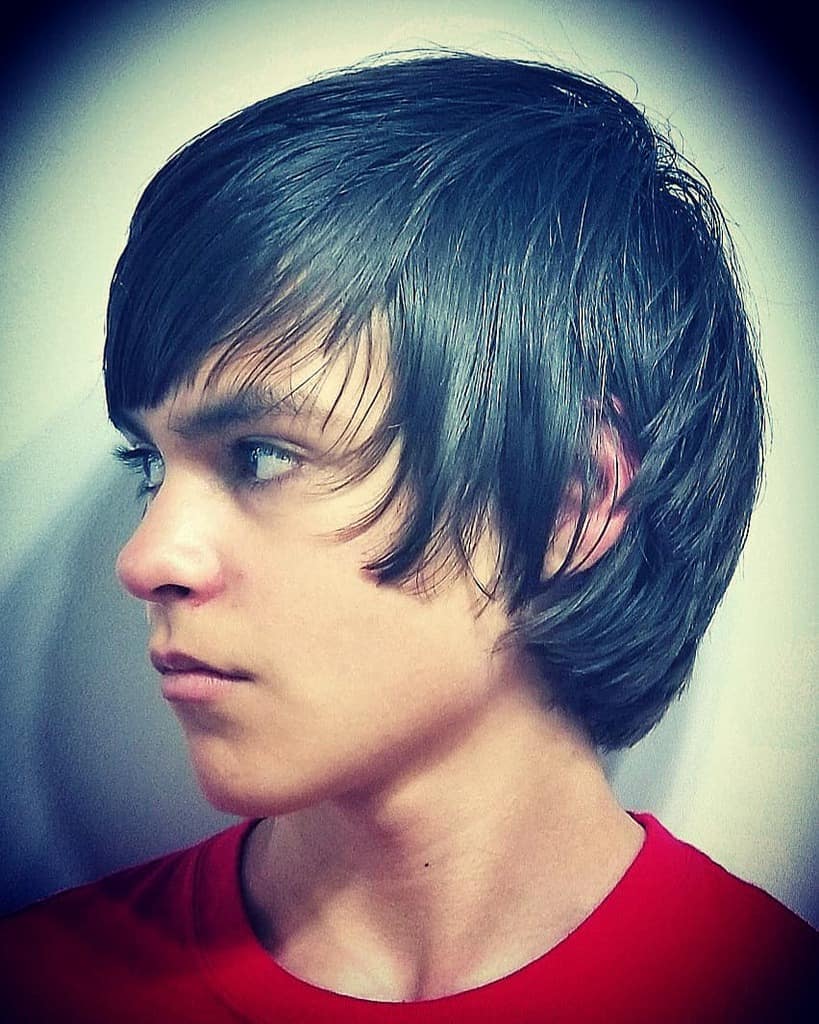 Though nowadays the man bob has disappeared, it used to be quite a prevalent hairstyle among the young guys in the early 1960s. The hair length is trimmed slightly above the ears while the bangs are styled to engulf the entire forehead. 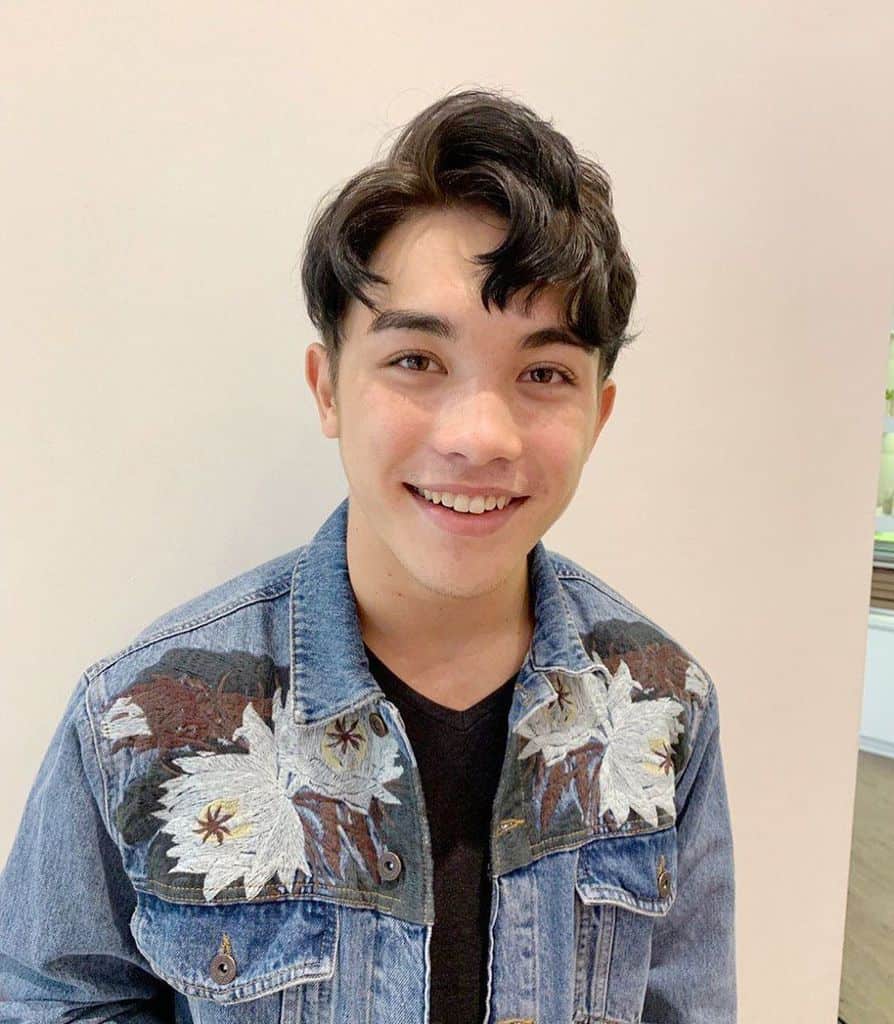 Wavy styles were quite popular in the 50s, and this trend continued into the ’60s. This 1960s hairstyle for men is perfectly combed to create neat waves that reach the shoulder-length. The tresses are parted on one side and bangs added on the top near the forehead but on the opposite side.

There is so much information concerning culture and society that we get from the fashion and hairstyles rocked by people who lived in a different era. The 1960s was a transformation period. And who knows, perhaps one of these 1960s men’s hairstyles may inspire your next hairstyle.