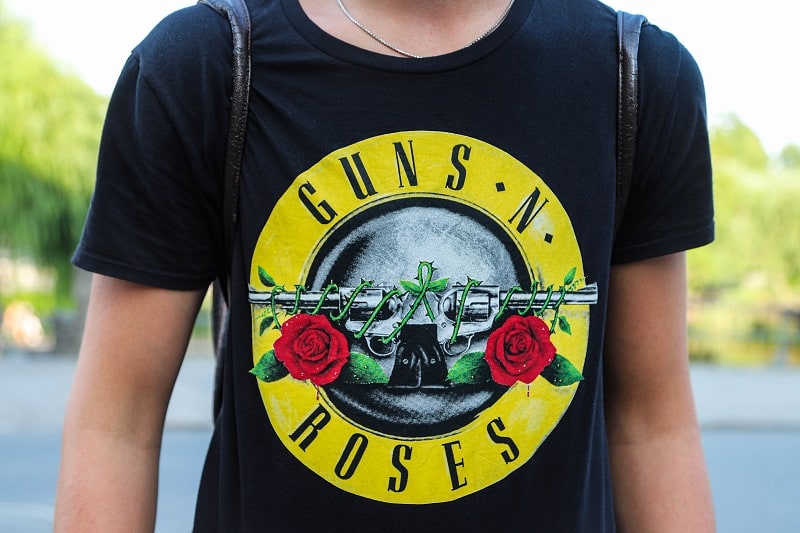 The 10 Best Band T-shirts of All Time

Music fans everywhere know the easiest way to show your support for your favorite band is to wear their merch loud and proud. Nowadays, it’s easy to get your hands on clothing items from your favorite musical acts, especially if they’re currently active, making music, or touring. In fact, there’s no need to even attend a show if you want to score some coveted merch from your music icons, as you had to decades ago, thanks to the internet and a lovely thing called worldwide shipping.

Luckily, fans of classic rock and punk bands who may have missed out on seeing their favorite groups perform live decades ago can still cash in on some seriously cool, vintage-inspired logo tees that’ll add a bit of edge to their wardrobe. Whether you pair these comfortable t-shirts with destroyed denim and Chuck Taylors, casual joggers and sneakers, or fitted chinos and Dr. Martens, there’s a classic band t-shirt that’ll fit anyone’s unique style – and music taste – from our list of the 10 best band t-shirts of all time. 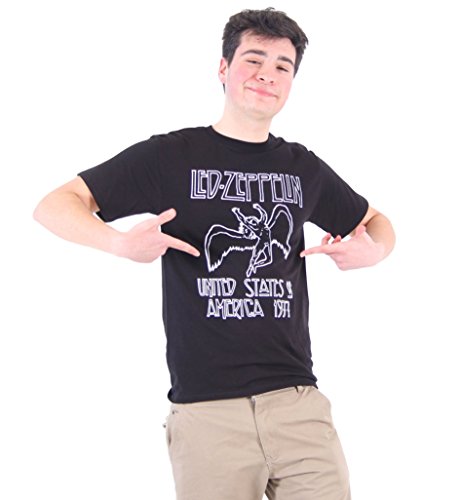 Led Zeppelin is one of the greatest rock bands of all time, and their 1977 tour is in the history books for a reason. After all, it was the band’s eleventh and final North American tour after a two-year touring hiatus and was wildly profitable for the group, as they sold a whopping $1.3 million tickets at the time. They also broke the world’s indoor attendance record at their show in Detroit, where they performed for over 76,000 people at once.

And while we all wish we could go back to the golden days of rock concerts, the harsh reality is we can’t. But what we can do is sport a Led Zeppelin 1977 American Tour shirt, which showcases all the 1977 tour dates on the back, comes in classic black, and is available in sizes S-XXL. Throw it on for any casual occasion and you’re guaranteed to be the coolest dude in the room. 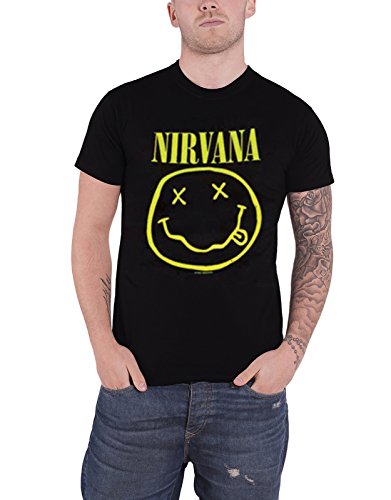 Nirvana is a band that will never go out of style, and neither will this classic Nirvana Smiley Face t-shirt featuring the iconic smiley face logo the band has become synonymous with over the last three decades. According to Forbes, the logo can be traced back to 1991, when Nirvana and their record label, DGC Records, hosted a record release party for the band’s album, Nevermind.

Apparently, an invitation to the party featured the “X-eye smiley face,” and the logo stuck with the band ever since. The Nirvana Smiley Face tee comes in classic black and can be paired with destroyed/ripped denim or joggers for a casual yet edgy look. 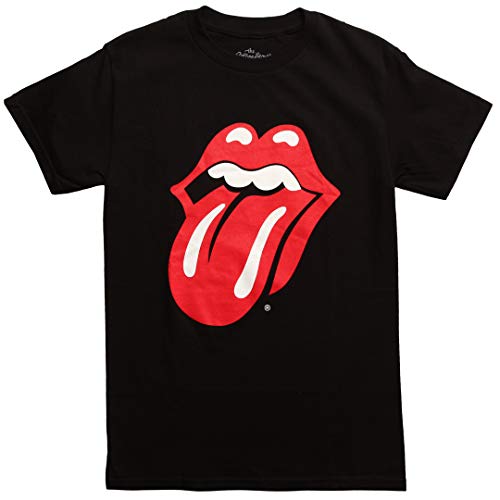 It’s hard to believe The Rolling Stones have been around since the 60s and are still making music to this day. The group has had one of the most successful runs in rock history and has been using their classic tongue logo ever since it appeared on their album Sticky Fingers for the first time in 1971.

“It’s a universal statement, I mean sticking out your tongue at something is very anti-authority, a protest really… various generations have picked that up,” the logo’s designer, Jon Pasche, said in an interview.  And no matter what generation you’re from, you’ll look seriously cool rocking this Rolling Stones Classic Tongue t-shirt anywhere you go – whether it’s a concert, the grocery store, or even on a date; plus, this shirt comes in either black or green, and is available in sizes S-XXL. 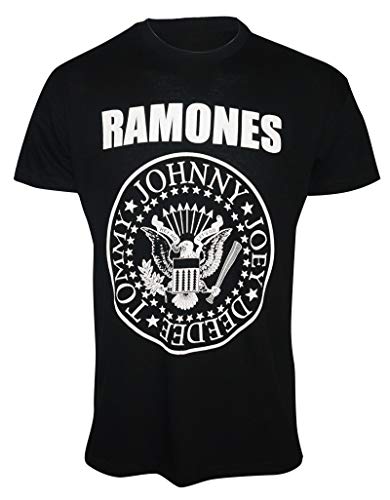 The Ramones are often considered one of the first punk rock groups in America, and their logo is one of the most recognizable ones in the music industry – even though they split in the late 1990s. The band’s creative director, Arturo Vega, who passed away in 2013, revealed how he came up with the logo, which is a play on the seal of the president of the United States.

“Instead of the olive branch, we had an apple tree branch, since the Ramones were American as apple pie,” he shared. “And since Johnny was such a baseball fanatic, we had the eagle hold a baseball bat instead of the arrows.” While The Ramones are obviously no longer together, you can still show your stellar taste in music by sporting a classic Presidential Seal shirt, which is made of 100% cotton, comes in black, and is available in sizes S-XXXL. 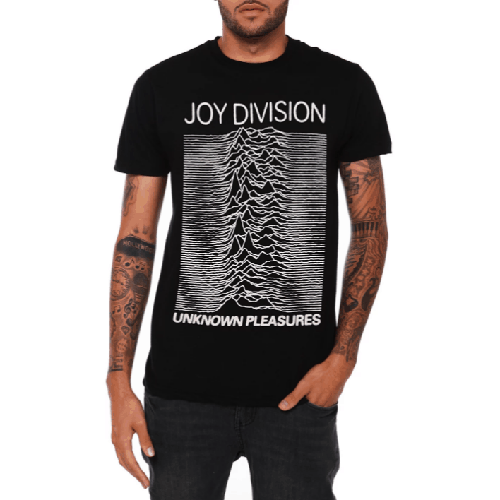 Even if you don’t know Joy Division, you’ve likely seen the logo from their iconic debut album, Unknown Pleasures, at some point in your life. And although the band started performing under the name New Order after lead singer Ian Curtis tragically died by suicide before their first US tour, the impact of Unknown Pleasures and the band’s innovative user of a synthesizer lives on in music history to this day.

This t-shirt, featuring the album art created by Peter Saville from the band’s first album, will add depth to any casual t-shirt collection and is available in a wide range of sizes for a perfect fit unique to your personal style. Pair with ripped skinny jeans and some Chuck Taylor high tops to complete the look.

See more about - The 40 Essential Albums To Own on Vinyl 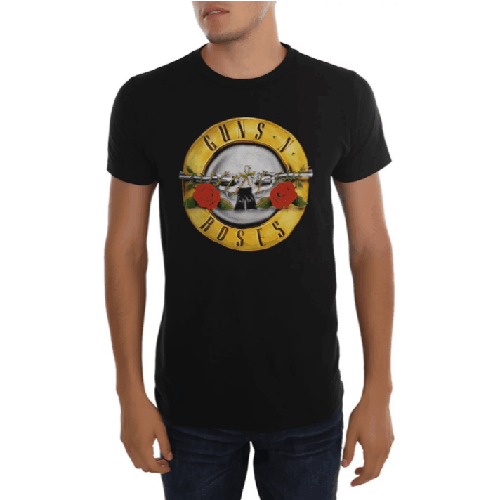 If you don’t have a Guns N’ Roses t-shirt in your closet, are you really even a classic rock fan? The logo, which aptly features two guns pointing east and west and a rose underneath each gun, was actually first designed by Slash himself. “I designed the first Guns N’ Roses logo, all our flyers – and my tattoos,” he revealed during an interview.

“Most of the time it was born out of necessity: it served my musical career.” And what better way to honor the legendary frontman than wearing the classic logo on a t-shirt? Available in a classic black color and sizes XS-XXXL, fans of all ages and sizes can easily show their love for Guns N’ Roses with this comfy cotton tee. 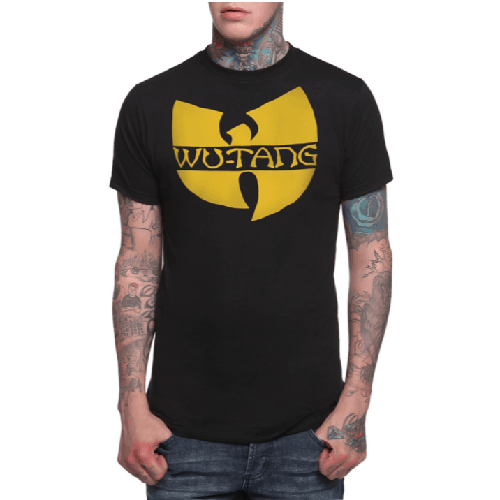 The Wu-Tang Clan logo is one of the most recognizable in hip-hop music to this day. The group, which formed in the early 90s and has been a staple in the scene ever since is responsible for mega-hits like C.R.E.A.M. (Cash Rules Everything Around Me), Protect Ya Neck, and Method Man.

Show your support for the hip hop group with this iconic Wu-Tang Clan Logo shirt, which you can snag in sizes XS-XXXL, is made of 100% cotton, and comes in black. The best part about this shirt? There’s a toddler version of it, so you and your little guy or girl can show off your stellar musical tastes together wherever you go. Because as we all know, Wu-Tang is for the children. 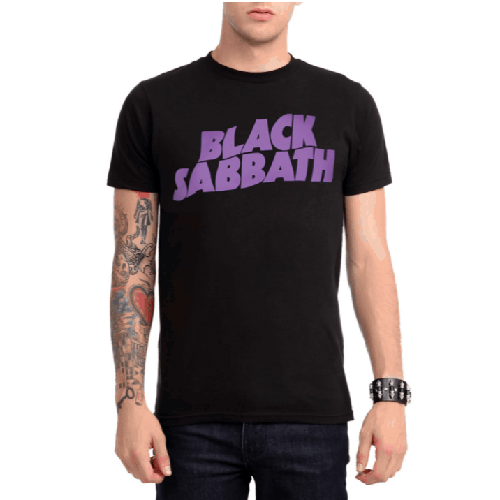 Black Sabbath is responsible for producing some of the most well-known rock songs in history. Even if you’ve never voluntarily listened to a Black Sabbath album, there’s a 100% chance you’ve heard their most popular songs, like Paranoid, Iron Man, or War Pigs on the radio, in TV shows, or in films.

And whether you’re a diehard, longtime fan or just starting to get into their music, the Black Sabbath Purple Logo tee is a must-have in your band t-shirt collection. Made from 100% cotton, this band tee is super-comfy, makes a statement with the bold purple logo featured across the chest, and comes in sizes XS-XXXL. 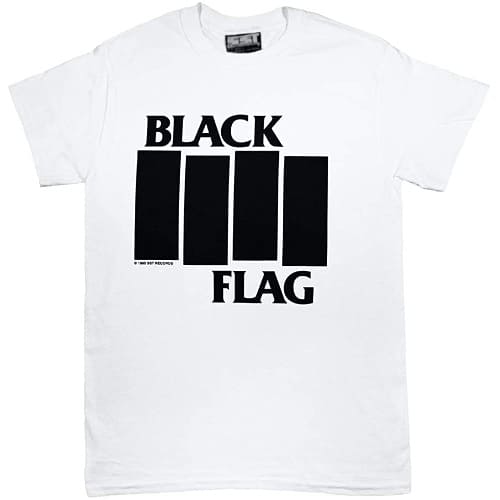 Black Flag is one of the most popular punk bands of its generation, and its iconic four-bar logo makes a statement wherever it’s seen. The logo was actually designed by guitarist George Ginn’s brother, Raymond Pettibon, who never went to art school and once said that the design was meant to represent the “abstract movement of a waving black flag.”

If you’re a fan of the band and don’t have this classic Black Flag Logo t-shirt already in your drawer, then honestly, what are you waiting for? According to reviews, this affordable t-shirt is made of high-quality material, is extremely comfortable, and fits true to size. 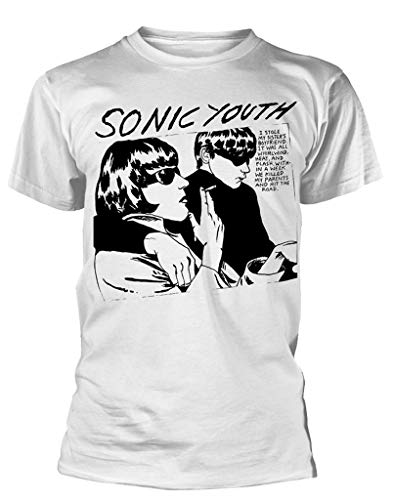 New York City is the birthplace of many famous rock bands, and Sonic Youth may be one of the most well-known groups to originate out of NYC in the 80s. The band is responsible for hits like Teen Age Riot, Bull in the Heather, and Kool Thing, and performed together for a whopping three decades until their 2011 split.

And even though it’s been 10 years since the breakup devastated fans across the globe, you can still show off your great taste in music by sporting this Sonic Youth Goo Album Cover t-shirt, which comes in a crisp white, has a black logo, and features the words, “I stole my sister’s boyfriend, it was all a whirlwind, heat and flash, within a week we killed my parents and hit the road.”