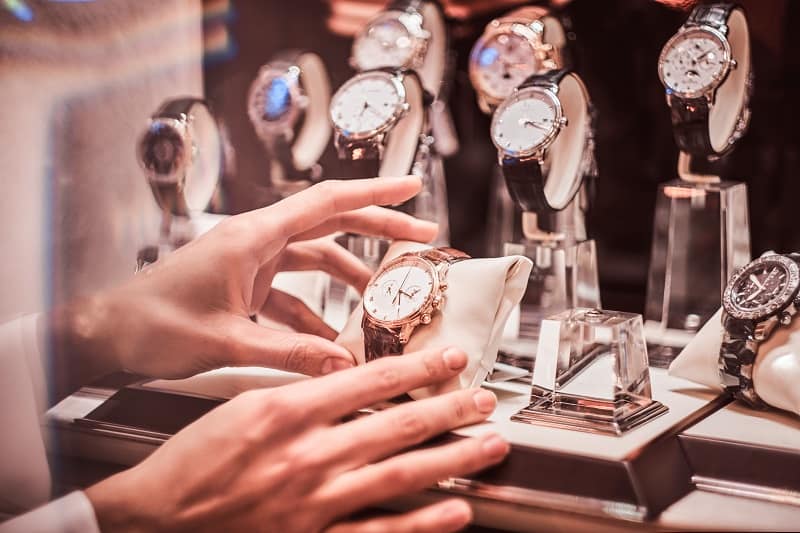 The 21 Best Watch Brands in the World

A watch is not just a timepiece to keep you on schedule. It’s also a display of elegance. However, there are so many brands out there that choosing the right one can be difficult.

In this article we’ll look at the 21 best watch brands in the world. 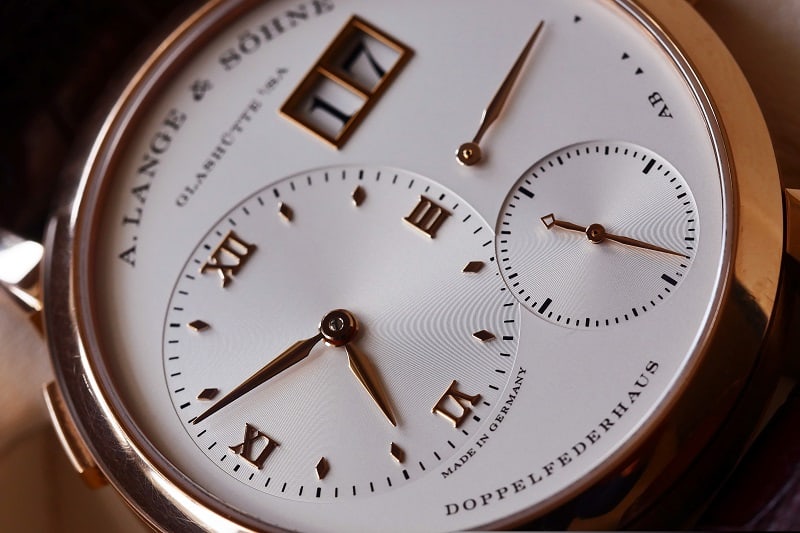 Lange & Söhne is one of the best luxury watch brands that you can find out there. It’s a German brand was founded by Ferdinand Adolph Lange in 1845 in the town of Glashütte. The brand became very popular for pocket watches in the first 100 years after being established.

However, after World War II, the brand took a hiatus. Fortunately, it was re-established in 1990 by Walter Lange, who was the great-grandson of Ferdinand Lange. This watch brand focuses on impressive aesthetics and high-quality timepieces, especially from a mechanical aspect.

Today, their watches have become some of the most popular among celebrities and royalty. 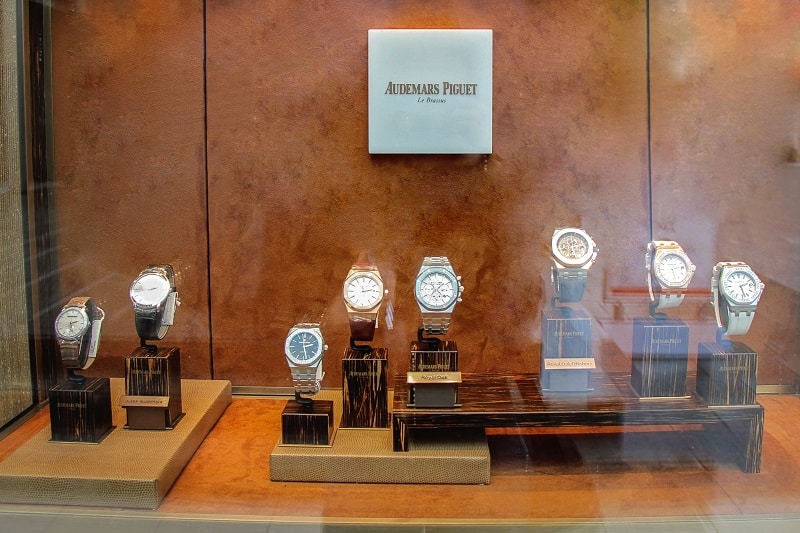 The Swiss are known for top luxury watch brands, and Audemars Piguet is one of the best brands you can get. The brand was established in 1875 in the Vallée de Joux in Switzerland.

One of the most popular models from Audemars Piguet is the Royal Oak model, which was introduced in 1972. This watch stands out as a stainless-steel sports timepiece, which is sold by a luxury brand. In fact, it is Audemars’ flagship model. Its wearers praise it because it combines style and durability. 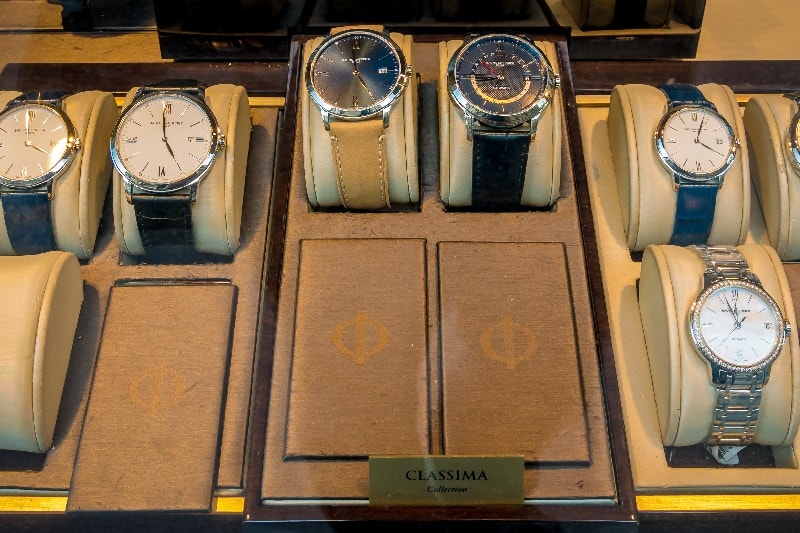 Baume & Mercier is yet another Swiss luxury watch brand. It was established in 1830 by two brothers – Célestin Baume and Louis-Victor. The brand’s dealership started in Les Bois in Swiss Jura, but it later expanded internationally. The brothers opened a branch in London 1851.

By 1918, the brand had specialized in making wristwatches, whose shapes were different from the traditional round shapes. One of the most notable models from Baume & Mercier is the Riviera. It was one of the first steel sports watches in the world. The brand also prides itself on modern collections such as the 2 Register Chronograph. 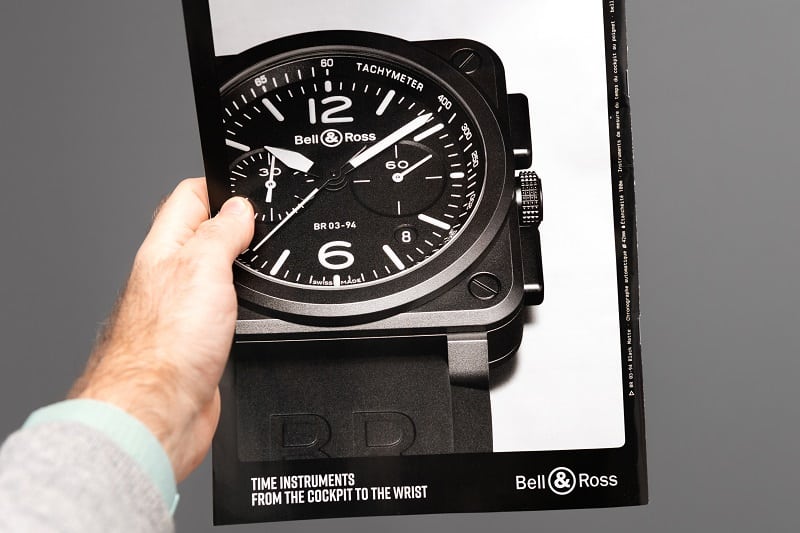 Another notable watch brand is Bell & Ross, which is mainly aimed at younger men. This Franco-Swiss manufacturer was established in 1992. Despite being a relatively new brand, it has made quite a name for itself.

Initially, the manufacturer designed watches for aviation professionals, with the help of aeronautical control panel specialists and top-notch watch designers. A great model is the BR01. The brand also makes high-tech diving watches, which are highly water-resistant. And the best part? All the models feature a luxury design. 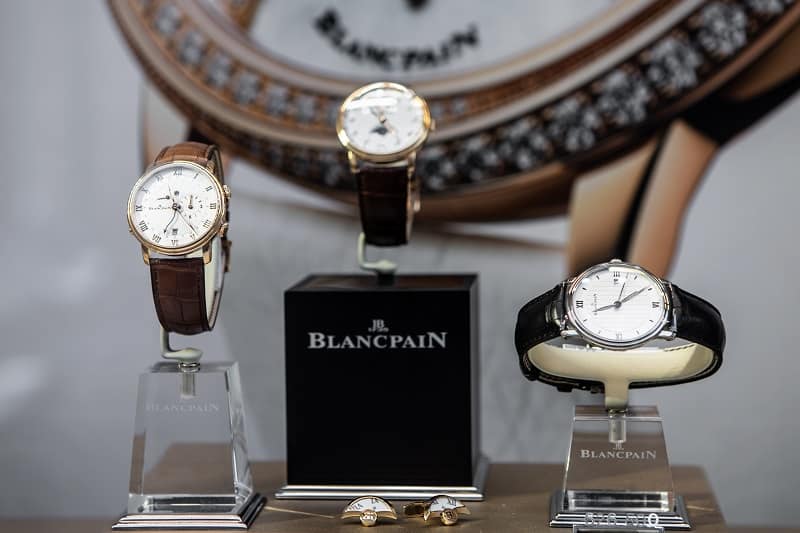 Blancpain is also another Swiss watch manufacturer that specializes in luxury watches. One thing about this brand is that it stands out from the competition. How so? Well, the brand only manufactures mechanical watches. You will never find a digital timepiece from Blancpain.

Every watch from this brand is crafted with precision so that every watch can have some sense of exclusivity. Besides, Blancpain only makes 30 watches per day. That means that there are limited pieces out there, and each is high-quality. Moreover, the manufacturer has a great sense of fashion, and you’ll find their watches finished with decorative ornaments. 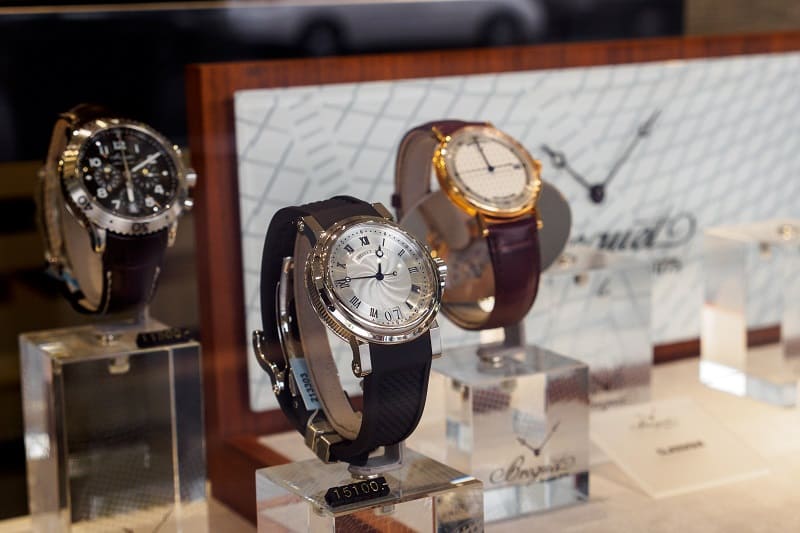 Breguet is also a luxury watch brand, which was established in 1775 by Abraham-Louis Breguet in Paris, France. However, as of 1999, Breguet became a subsidiary of the Swiss Swatch Group. The brand gained popularity because it was one of the watches to incorporate watchmaking tech like the tourbillon, which was Breguet’s invention.

The brand also boasts as the first ever manufacturer of the self-winding watch in 1780. Breguet was also the first manufacturer to make a wristwatch in 1810. Over the years, the brand has managed to maintain its reputation despite the ownership changing several times. 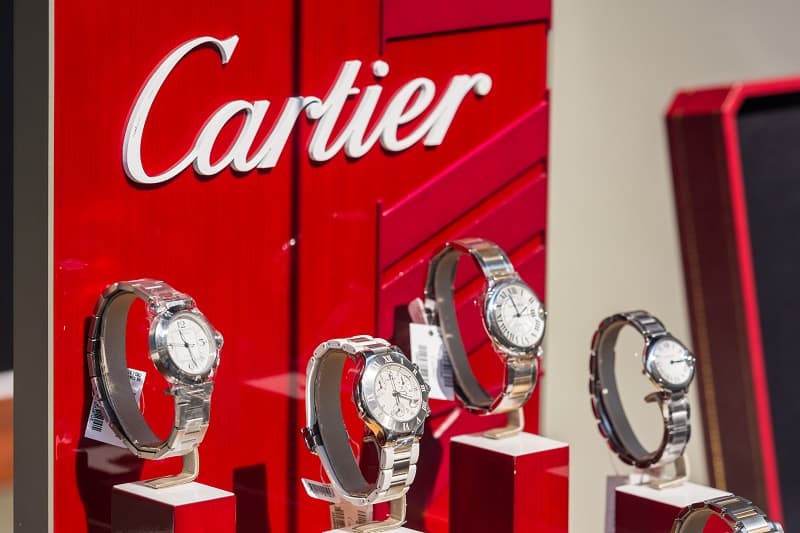 Cartier is one of the most respected brands out there. In fact, when most people hear the name, the first thing that comes to mind is jewelry. However, you need to know that Cartier started by producing watches.

The brand was founded in 1874 in Paris, France by Louis Francois Cartier. The brand stayed under family ownership up to 1964, and it has maintained its name among the leaders in the watchmaking industry. Their watches are known for being made with some of the best techniques. Most of them use luxury materials such as gold, and you can have your watch made according to your preferences. 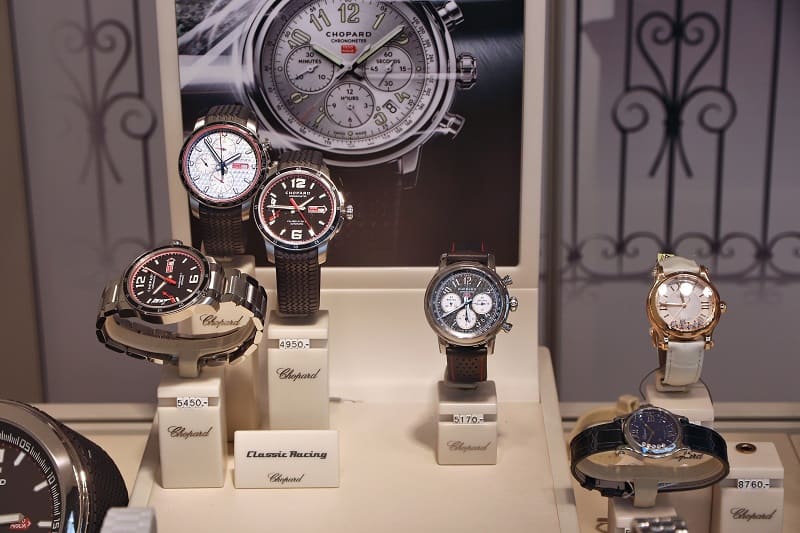 Chopard is a Swiss manufacturer and retailer of jewelry, watches, and accessories – all luxury items. The brand was established in 1860 by Louis-Ulysse Chopard in Switzerland. In its early days, Chopard was famed for manufacturing chronometers and pocket watches. The brand became owned by the Scheufele family of Germany from 1963.

The company’s headquarters are in Geneva, and it is popular for making high-quality watches. In fact, Chopard manufactures approximately 75,000 watches per year. And the brand specializes in making luxury sports watches for men. However, it also makes diamond jewelry for women. 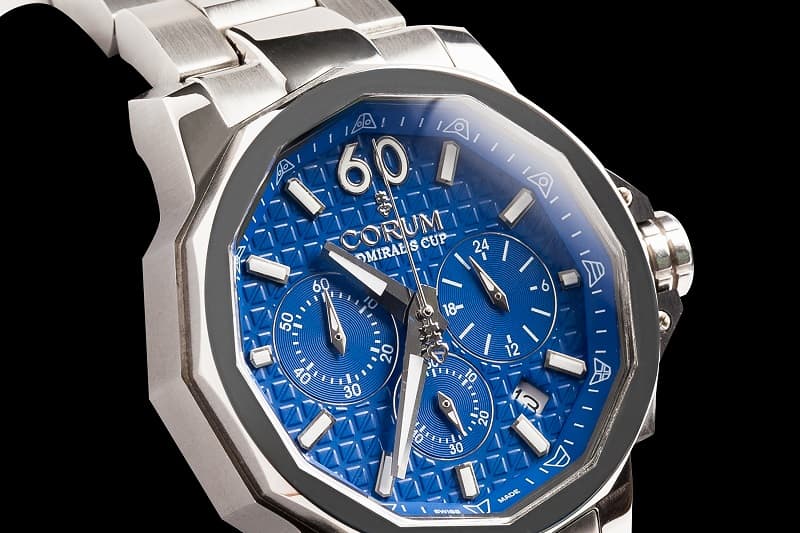 Corum is a Swiss luxury watch manufacturer that was established in 1955. The brand is renowned for making high-quality timepieces, and the majority are limited editions. Corum has plenty of watch collections, and each features a unique and impressive design.

One of the most popular releases from this manufacturer is the $20 Liberty Eagle Coin Watch. In fact, it’s one of the most sought after models by Corum lovers. The brand has made a name for itself in the market, and you can see it in the Admiral Cup series. Furthermore, this brand was the founder of the World Series of Poker watches. 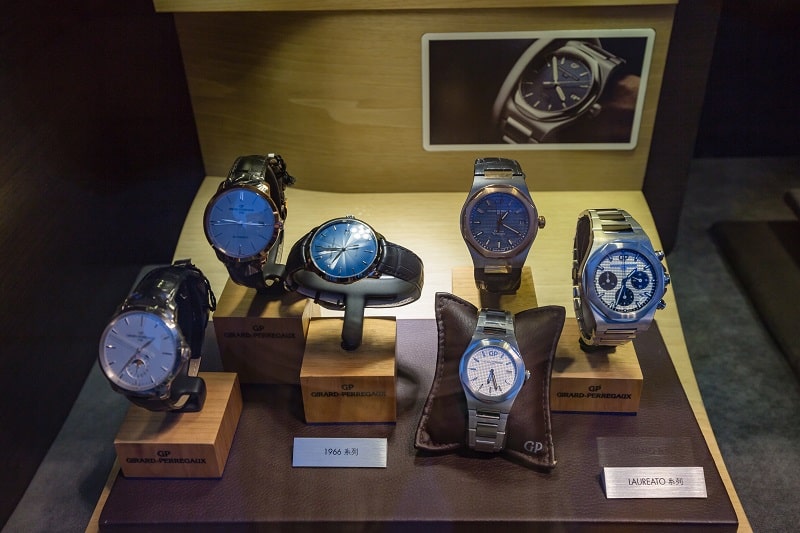 If you’re looking for a high-quality watch, then Girard-Perregaux could be your go-to company. The brand was established in 1791, making them one of the longest watchmaking companies out there. As a result, they produce high-quality timepieces.

But here’s the kicker. All the elements of their releases are manufactured in-house. That way, the company does not compromise on quality. One of the most notable releases from this company is the Esmeralds Tourbillon, plus, it also made the first quartz watch in Switzerland. 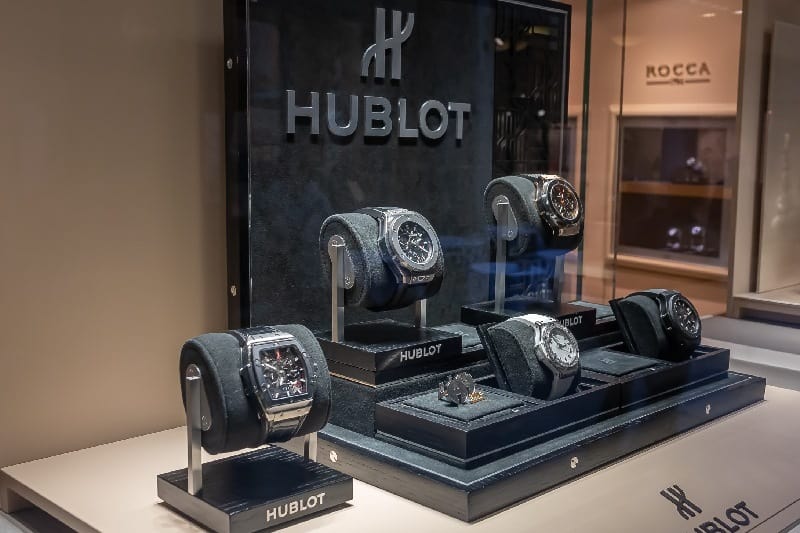 Hublot is one of the most popular watch brands out there. Mainly because it is very unique. How so? Well, it combines several materials to create unique and high-quality watch designs. You can find a watch combining leather, rubber, metals, and ceramics.

Hublot was founded in 1980 by Carlo Crocco. The company fuses traditional watchmaking methods with modern techniques to produce impressive designs. The company also produces limited editions, but these fall on the higher-price range.

One of the most impressive things about Hublot is that it launched a new technique of detecting counterfeit watches in 2009. The method relies on a smart card to detect this. 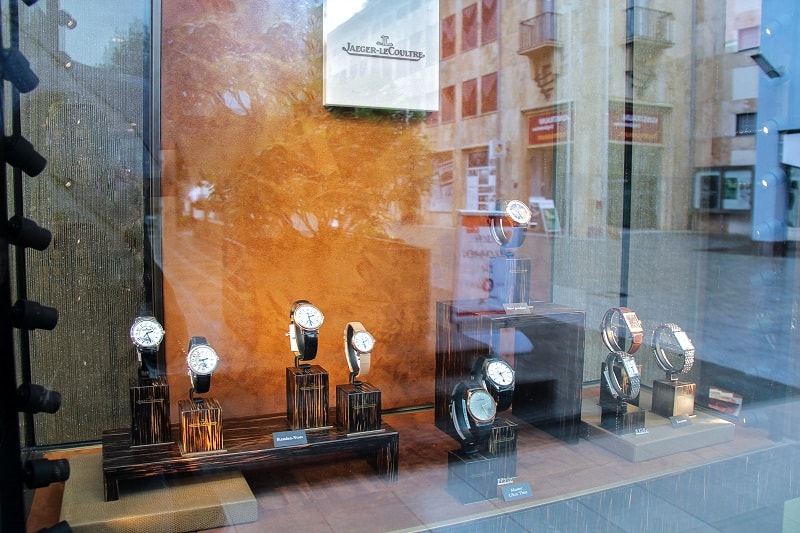 Jaeger-LeCoultre is yet another high-end watch brand. The company was founded by Antoine LeCoultre in 1833. However, as of 2000, the brand became a fully owned subsidiary of Richemont, a Swiss Luxury group.

The company stands tall against competition because its designers are very inventive. In fact, it has 400 unique patents, which go to show the brand’s originality. One of its most renowned releases is the Reverso collection of 1930. The collection is not only unisex but also features an impressive rectangular design.

Their watches feature exemplary quality because each undergoes a rigorous 1,000-hour quality test. Besides, their watches come with an 8-year warranty. 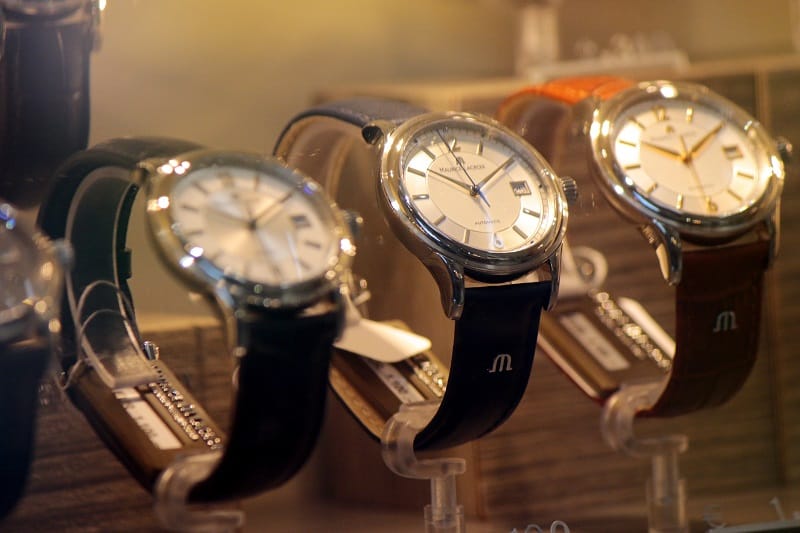 Maurice Lacroix is one of the highly-praised watch brands for men. The brand was founded in 1975, and despite its young age, it has managed to build a great name for itself on the high-end watches market. The brand specializes in making masterpiece timepieces, which include limited editions.

Its watches are based on historic movements bought during the quartz crisis and refinished to meet high-quality standards. Besides, the brand produces unique models, and it has also won an award. Additionally, the brand is the official watch partner of FC Barcelona. 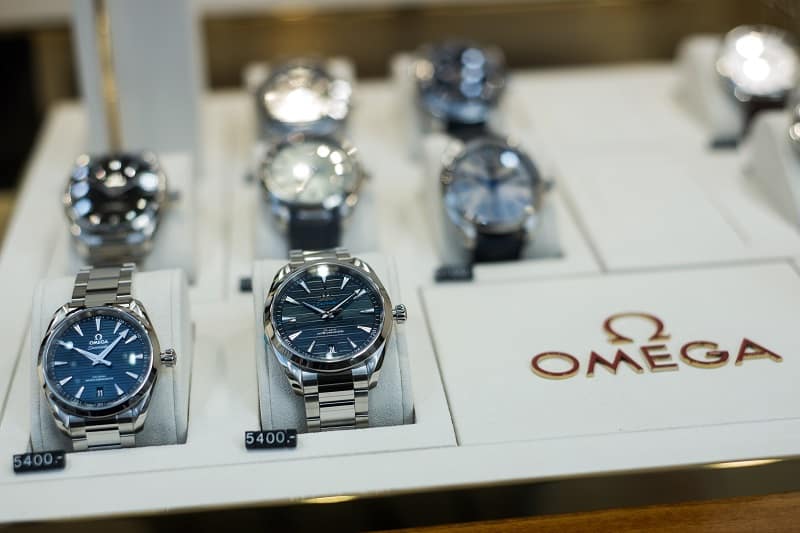 When talking about the best watch brands in the world, we cannot omit OMEGA. OMEGA is a Swiss luxury watch manufacturer, which not only defines excellence but also style. The manufacturer makes watches for both genders. So, you can get yourself a piece and also gift your loved ones an OMEGA.

The brand makes some of the best wristwatches out there. And it undoubtedly exudes high-quality and great craftsmanship, considering that’s it has been around for over 170 years. In fact, OMEGA was the first watch to be worn on the moon – the OMEGA Speedmaster Professional. 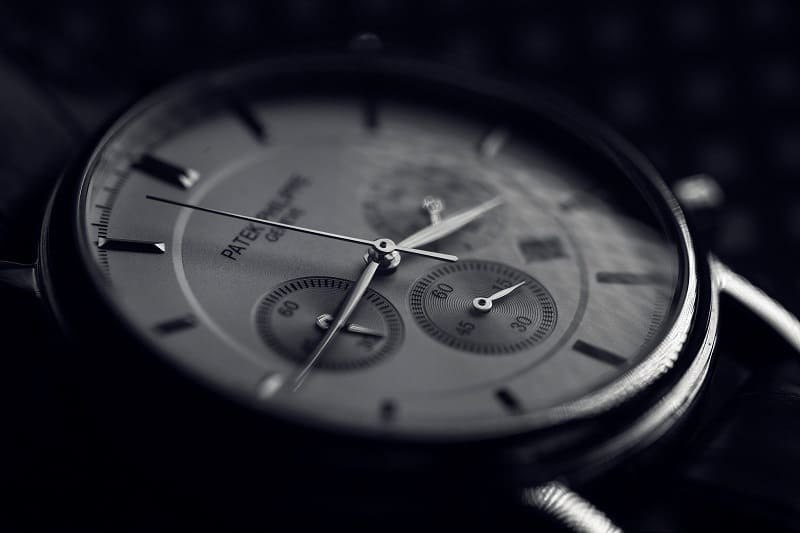 Switzerland seems to be home to some of the best watch brands on the market, and the Patek Philippe is one of them. The company was established in 1839, making it one of the oldest watch manufacturers around.

The brand has grown over the years, and it produces some of the most complicated mechanical watch models. The company also has more than 400 retail locations around the world. But that’s not all. Patek Philippe SA opened its museum in Geneva in 2001.

All the watches are made skillfully, using the best machinery and equipment to produce quality craftsmanship. 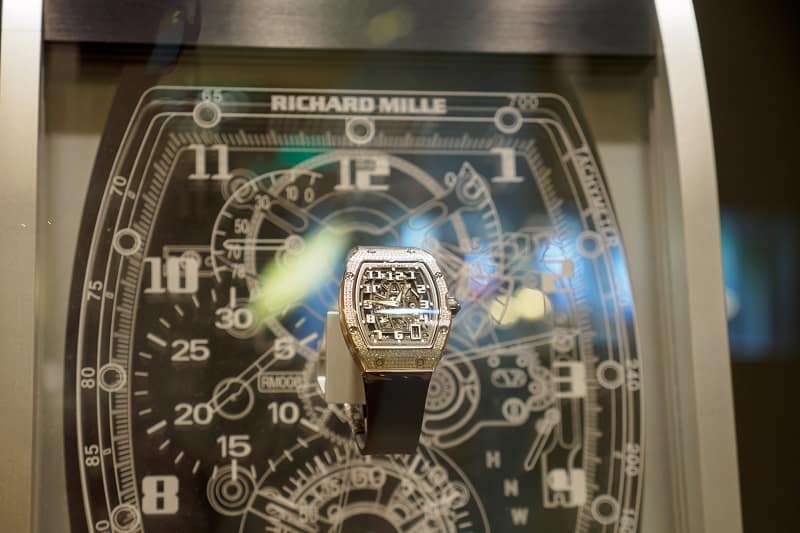 Richard Mille is one of the youngest Swiss luxury watchmaking companies, having been established in 2001. The company was founded by Richard Mille and Dominique Guenat, and it is based in Breuleux, Switzerland.

The first timepiece from the company was the RM 001 Tourbillon, which was quite the masterpiece. The watch featured a leather strap and the best thing is that it had a 50-meter water-resistance. Over the years, the brand has continued to manufacture more quality watches. But their first ladies’ watch was made in 2005 – the RM 007. So far, the company has six stores around the world, with the largest being in New York. 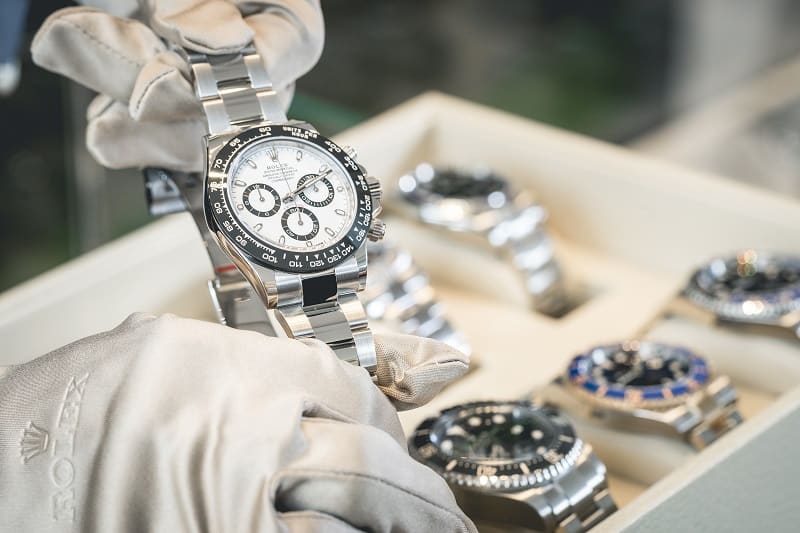 If there’s a high-end watch brand that’s known by almost everyone, then it has to be the Rolex. Rolex represents prestige and elegance, and the manufacturer makes sure each piece has an exclusive design. The company was initially established as Wilsdorf and Davis by Alfred Davis and Hans Wilsdorf in England in 1905.

The years of experience in watchmaking allow Rolex to manufacture high-quality pieces seamlessly. Interestingly, the company was the first to patent a water-resistant watch in 1945 – the Oyster. This is a watch that’s crafted for style and resilience. So, you can wear it anywhere. 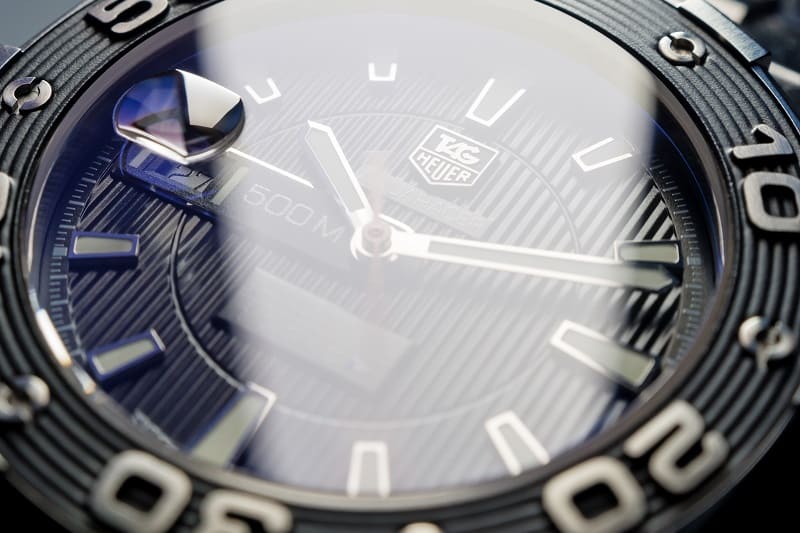 Tag Heuer is a stylish and luxury timepiece, which will mainly appeal to the younger generations. Besides, its watches are not as expensive as most high-end watch brands in its category. The brand is associated with motor racing, which makes it superb for the target market. The brand also gets endorsements from celebrities.

One of the best things about Tag Heuer watches is that they feature stellar quality. Their stylish design also matches the expected durability. Besides, the brand also has a waterproof watch – the Aquaracer, which you can go with up to a depth of 1,000 meters. 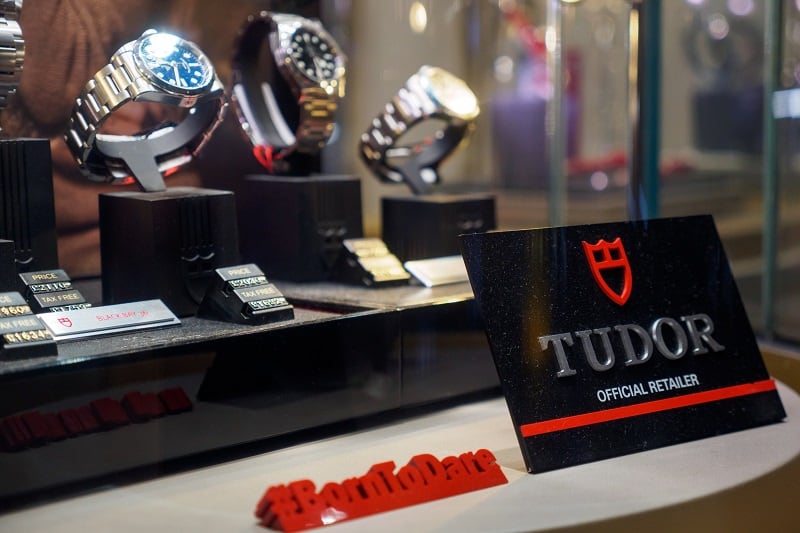 Tudor is another poplar high-end watch brand. The company was founded in 1926 by Hans Wilsdorf, the founder of Rolex. So, that makes the Tudor a sister company to Rolex. Wilsdorf aimed to make another brand that matched Rolex’s reputation, but one with a contemporary appearance.

Overall, Tudor watches are cheaper than Rolexes. But Tudor is great for functionality. The brand is suitable for the Navy, divers, military men, and adventure enthusiasts. It is quite a high-quality brand. 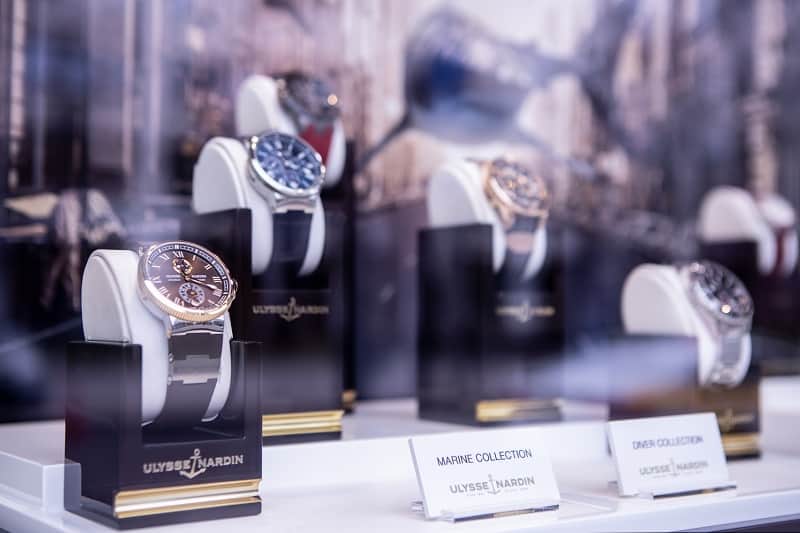 Ulysse Nardin is a luxury watch brand, which was founded in 1846 in Le Locle. The company is especially popular for producing complicated watches and high-quality marine chronometers. The manufacture mainly makes the watches for the nautical world, and that’s why the brand is so popular with the navy and sailors. The brand has five collections, including Diver, Marine, Classic, Freak, and Executive. 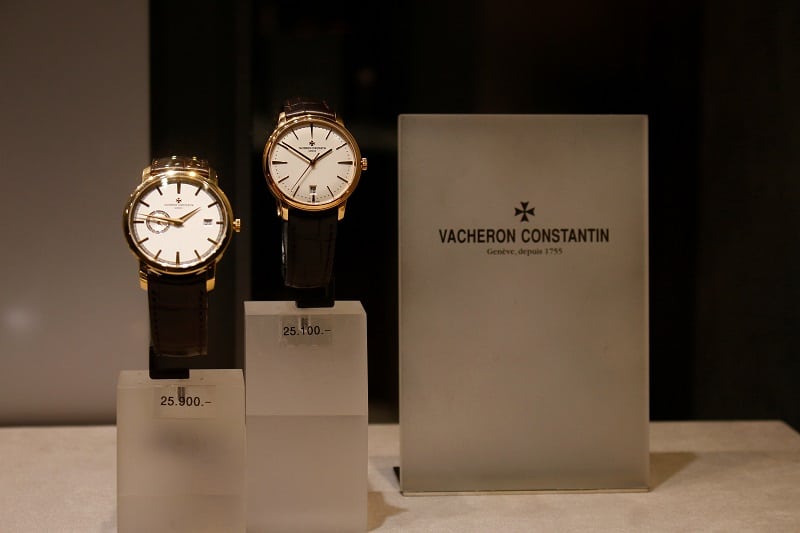 Lastly, we have Vacheron Constantin, which is a Swiss luxury watchmaking company. The company was established in 1755, making it one of the world’s oldest timepiece makers. The brand is popular for making aesthetically attractive and high-quality watches, which match up to the years of experience it has.

The company makes a limited number of watches in their workshop. So, you can rest assured of excellent craftsmanship in every timepiece. Besides, the watches are very durable; hence, you can pass your piece(s) down generations.