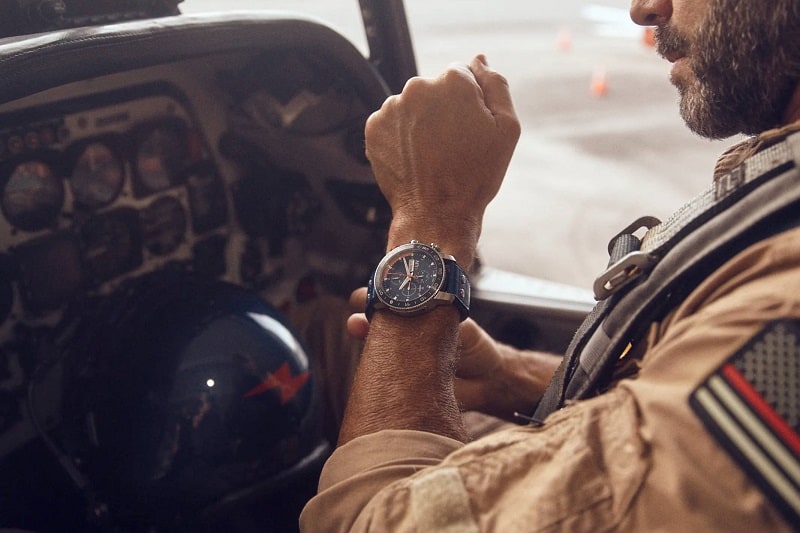 A Brief History of the Pilot’s Watch

To put it simply, a pilot’s watch is just another tool used by aviators. Characterized by their oversized bezels and extreme legibility, these timepieces take what is essentially a standard wristwatch and upgrades it to include features and functions better suited to those in the mile-high club.

From its early beginnings at the turn of the century to its position amongst wartime aviators, the pilot’s watch, much like the diver’s watch, is a specialty timekeeping device that, since its inception, has been a staple in the world of horology.

What is a Pilot’s Watch? 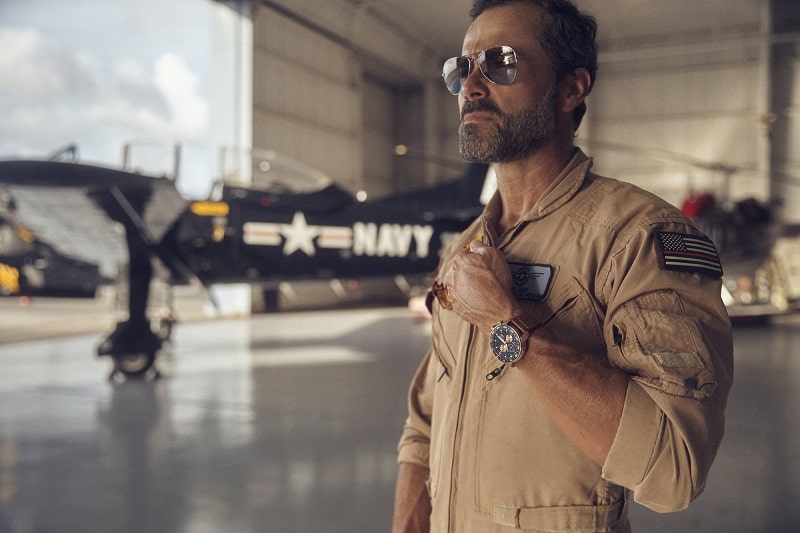 While most will claim there is no definition or standard for what a pilot’s watch is. We would argue that if it’s been specially tailored to an aircraft pilot’s needs, it’s a pilot’s watch.

Typically boasting chronograph functionality and an easy to manipulate crown, a pilot’s watch can include various complications for measuring distances and time while in flight.

Characteristics of the Pilot’s watch

Each and every brand has a different vision for what makes a pilot’s watch. However, the five specific characteristics consistent across the cavalcade of pilot’s watches include a large and legible dial, luminosity, an oversized crown and extra bezel markings, a dual time or GMT function, a 12 o’clock orientation triangle, and the flyback chronograph.

Large and legible dials make it easier for a pilot to tell the time quickly regardless of conditions. The addition of luminosity features also increases legibility, especially at night. Notable for their large Arabic numerals, the oversized crown is another crucial feature of the pilot’s watch. Historically, pilots wore gloves during flight, making it difficult to operate a watch without a more oversized crown.

The Longines Avigation BigEye, for example, features a 41mm dial with massive easy to read markings and indices. Coupled with the oversized buttons and its 54-hour power reserve, it’s perfect for long-haul flights. 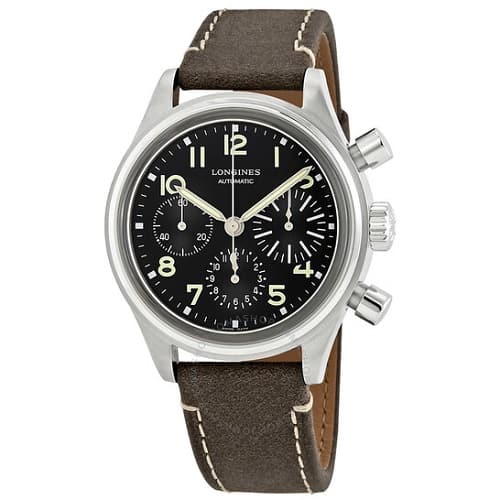 Additional bezel markings are used for various calculations like fuel burn and wind correction angles, alongside the 12 o’clock equilateral upright orientation triangle, which allows a pilot to immediately interpret the time regardless of their current orientation in the air.

Considered one of the best pilot watches you can buy today, the re-issue IWC Automatic Spitfire was initially produced for the British Royal Air Force from 1948 onwards. Boasting additional bezel markings up the wahzoo and the always important 12 o’clock orientation triangle, pilots can tell the time no matter which way they are facing.

Dual Time or GMT Functions and flyback chronographs are added complications that allow plots to track multiple time zones or coordinated universal time (UTC) in addition to assisting waypoint navigation and grid searches, thanks to the single push flyback chronograph.

Now we move onto the complicated side of things with Dual Time/GMT functions, flyback chronographs, and even onboard computers, also known as a Navitmer. Rolex was the first watch manufacturer to produce the Dual Time/GMT functionality. First conceptualized for commercial pilots of Pan Am (Pan American World Airways), aviators would favor the Rolex GMT-Master for many years to come.

Getting even more complicated, however, the Breitling Navitimer B01 Chronograph 46 is one such watch that looks like it’s been stripped directly from a 747’s cockpit. Boasting a chronometer-certified mechanical caliber that can keep track of time spent, it can even complete mathematical calculations on the fly thanks to the addition of a Navitimer.

Essentially an onboard computer, this function uses a rotating bezel for basic arithmetic and mathematics. 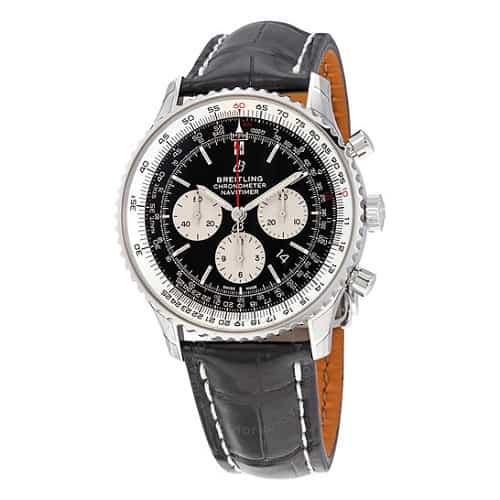 History of the Pilot’s Watch

When you’re thousands of feet in the air, battling against the insane conditions of high altitude flying, you need the right kind of tool to complete the task at hand. Facing an issue with watch technology in the early 20th century, many pilots had to contend with the flimsiness of pocket watches. Having to strap them down to either their wrist or thigh, it would not be until 1904 that the first pilot’s watch would arise.

Constructed upon special request, Louis Cartier was tasked with building a specialized watch for his friend Alberto Santos-Dumont. Presenting the Brazilian aviator with the Cartier Santos, it was the first watch of its kind.

Capable of matching the same reliability and accuracy of the planes they were flying, Santos-Dumont needed a reliable way to keep time without removing his hands from the controls. Considered also the first wristwatch, the Cartier Santos would go on to pave the way for many years of evolution to the incredible timepieces we have today.

Seeing the likes of Breitling add in elements such as a circular slide-rule and chronograph to meet the demands of ever-changing flight complexities. While other brands like IWC, Bell & Ross, and Longines eventually joined the fight to supply pilots with the tools they needed during wartime.

Of course, the most outstanding achievement for the Pilot’s Watch was traveling beyond our atmosphere and into the great unknown – space. An accolade that was achieved by the Omega Speedmaster (ref. CK 2998) when it was worn by astronaut Walter Schirra during the “Sigma 7” mission of the Mercury Programme in 1962.

Although the past is filled with incredible examples of analog horology and complicated mechanical improvements, the digital revolution is impossible to avoid in 2021. For that reason, professional pilots are more likely to opt for more modern watches like the Garmin D2 Delta PX.

Hosting a whole range of features like GPS navigation, intelligent notifications, flight planning, altimeter, automatic flight logging, and a whole lot more, it’s much easier to operate than a Navitimer. Though it retains some of the analog aesthetic that makes pilot’s watches so popular today, it’s still a smartwatch through and through.

It will be interesting to see what the next step is in the evolution of the pilot’s watch. 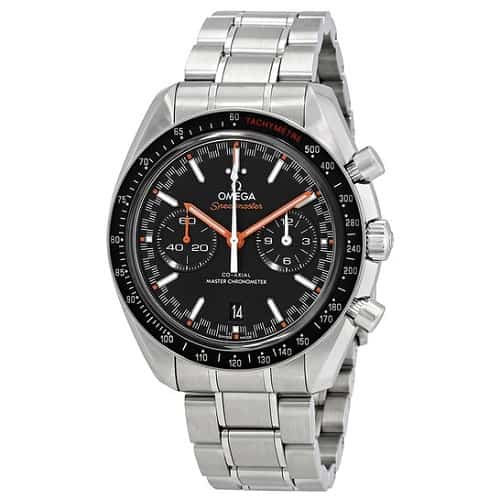 See more about - What Is a Chronograph Watch?