Tattoos provide an intensely satisfying mechanism for celebrating the experience of being alive. As a result, DNA tattoos are a natural evolution of these artistically sublime expressions of humanity.

To celebrate life and science in tandem, no ink can compete with a DNA tattoo.

By permanently displaying the 20th century discovery of James Watson and Francis Crick, guys can enter an elite club consisting of the greatest minds who have ever lived.

Most DNA ink includes some iteration of the double-helix structure. All of the chromosomes are available for depiction, and the comprehensiveness depends directly on personal inclinations. Colors are not typically required for these tats, so guys can get stellar black-and-white artwork with no hassle or commitment to multiple sessions. As an alternative, some wise fellows get the code itself in-scripted.

Some DNA tattoos are also a discreet tribute to LSD, since the biologist and physicist were purportedly under the influence of hallucinogenic compounds when they made their ground-breaking observations. Whether you are rejoicing about science or substances, this kind of ink will be perfect for your external vibe at all times.

Check out the litany of striking tattoos we’ve compiled in this collection: 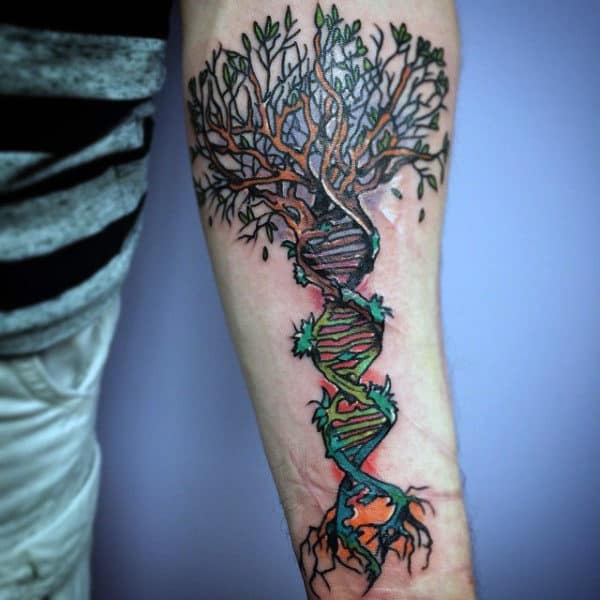 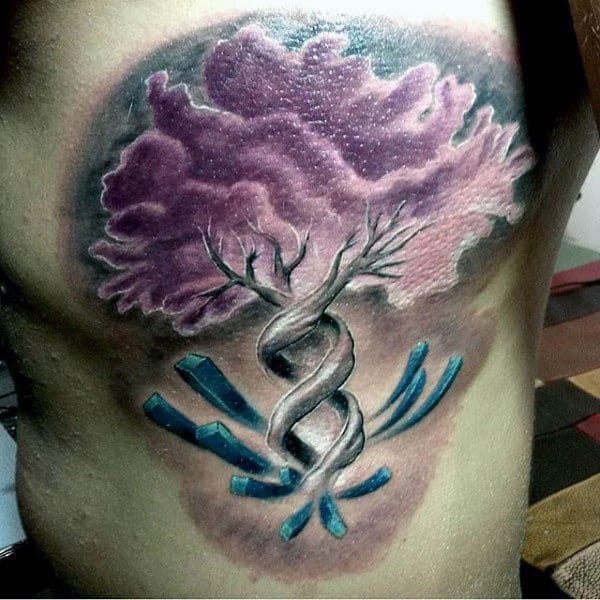 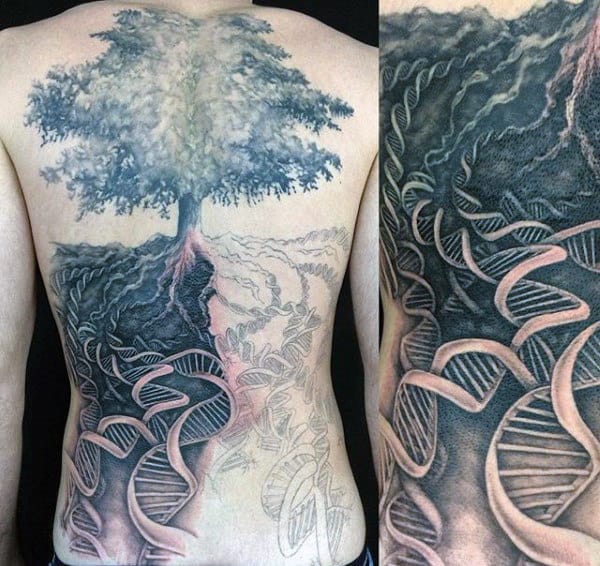 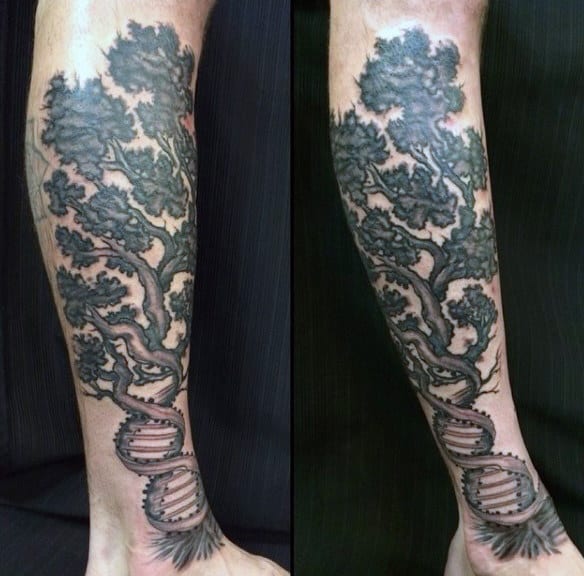 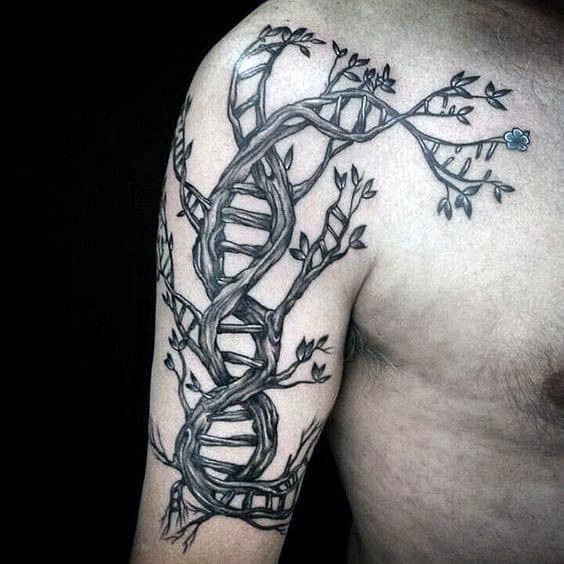 DNA is one of the most versatile things in the universe and tree DNA tattoos are no exception. Whether you’re looking to incorporate the two images together or use the foundation of a tree for DNA to grow off of, there are a variety of designs to consider. Will the DNA extend from the roots and tree branches? Or will the trunk twist like a double helix?

The last piece shown is an especially phenomenal interpretation, assimilating the woodwork of the tree into the structure of the DNA molecule. The subtlety of the second piece is also remarkably crafted. And don’t be afraid of adding a rainbow of colors! DNA has a naturally winding and meandering appearance, making it ideal for imagery of branches and roots, so you can explore different images with your artist depending on their own personal style. 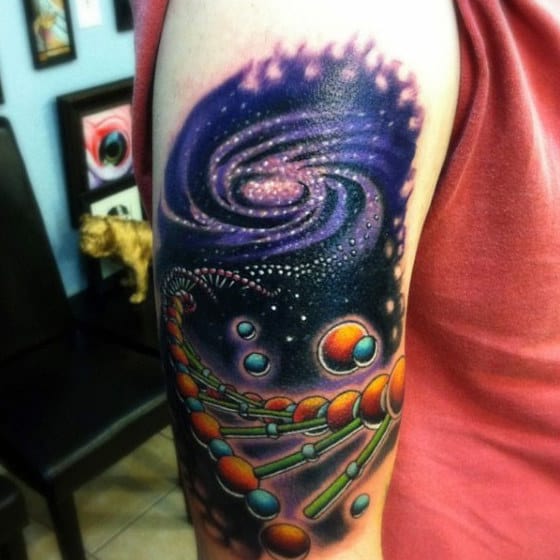 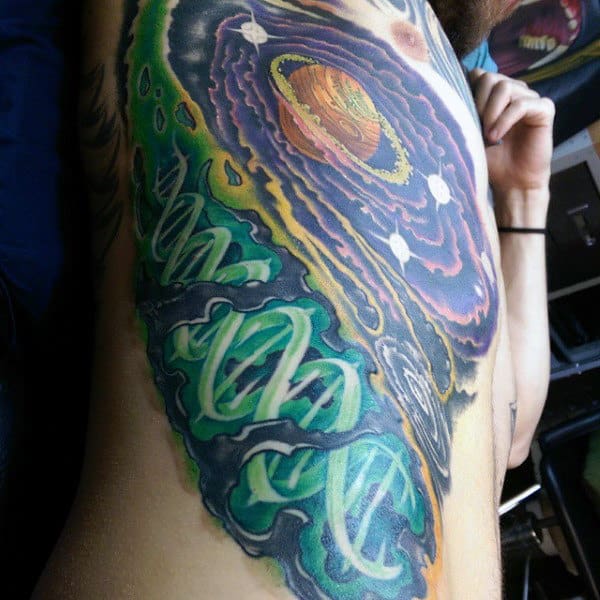 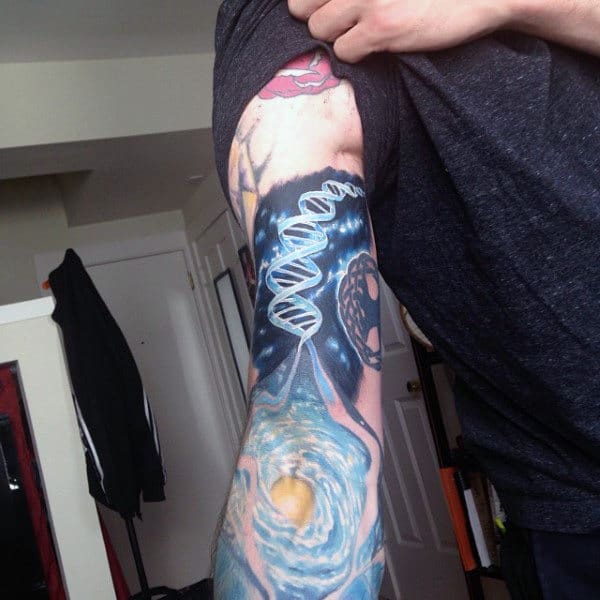 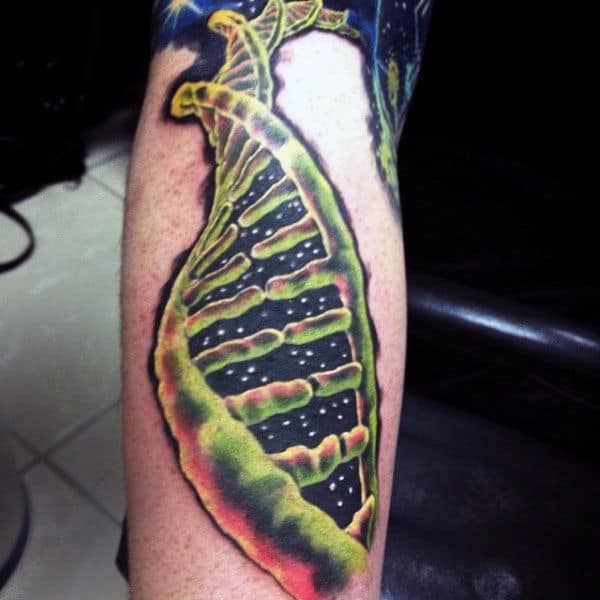 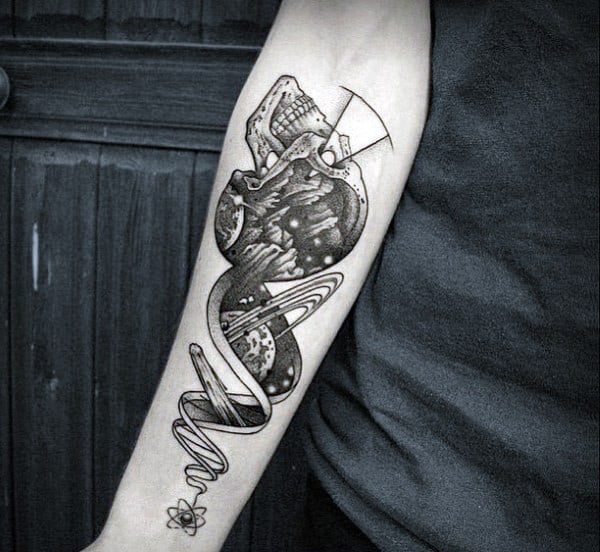 Blend the micro and the macro together with a stellar space DNA tattoo. Absorb a galaxy into the DNA helix or grow a star from the strands. As all of these examples show, this is a great opportunity to get creative with your color palette like the second and third pieces shown.I’m a big fan of the shadowing of the DNA molecules in the third piece, especially as the molecules begin breaking apart in the foreground. The whole piece balances really well despite the seemingly contrasting colors.

And technically, we can’t confirm that DNA didn’t come from space so feel free to give your space DNA tattoo an otherworldly feel like the fourth piece. The shading of the mutant green helix contrasts impeccably with the inner star-speckled filler. 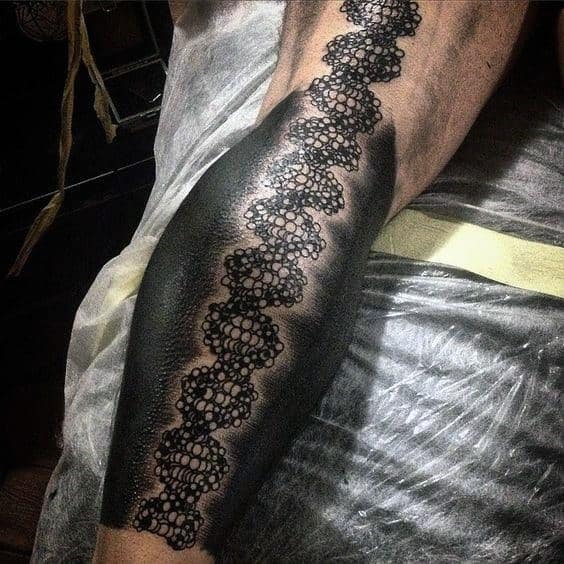 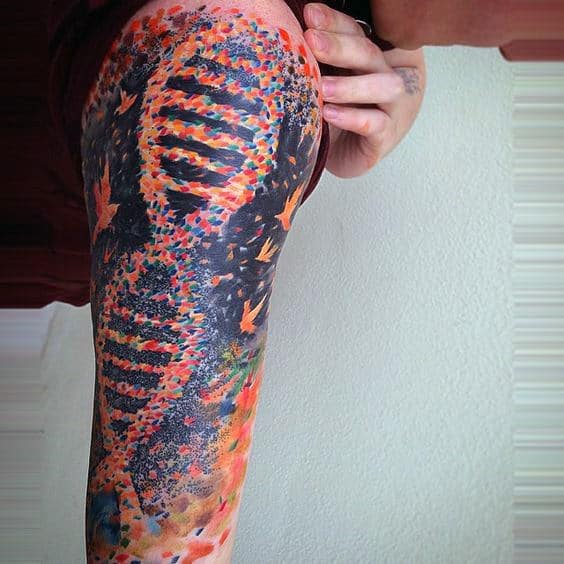 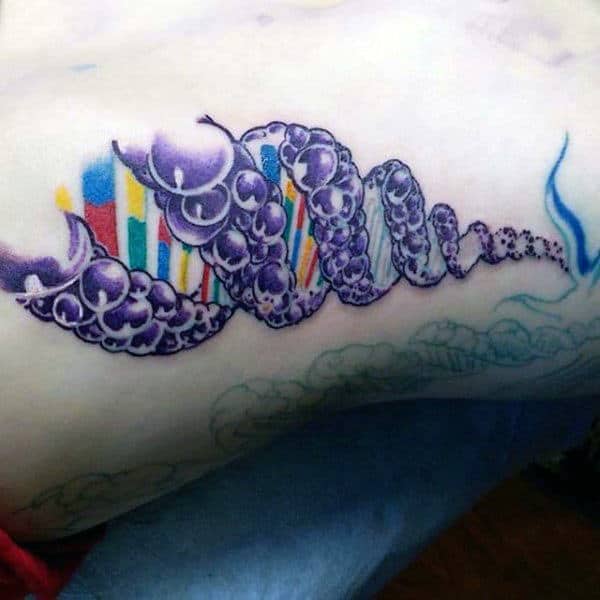 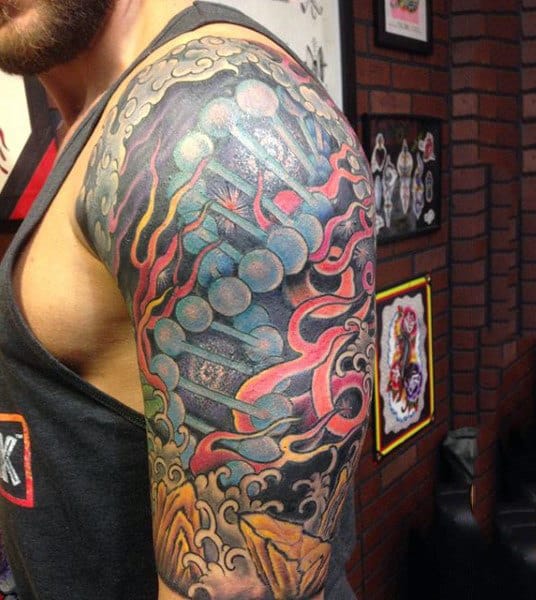 If you want to expand upon the true complexity of DNA, get detailed to the molecular level with an atomic DNA tattoo. DNA is made up of the atoms of five different elements which clump together to form two strands that coil around one another to form the double helix formation. Go with a black ink design like the first piece pictured and use blackout to draw the eye towards the plurality of particles.

The first and third piece are also great examples of negative space. I especially like the third piece, which uses negative space to create shading on various spheres. Or create an explosion of color with your atomic DNA tattoo like the second piece shown, which offers an abstract watercolor version of a DNA tattoo.

The intricacy of atomic DNA tattoos lend themselves to various styles whether you’re using linework, pointillism, traditional style, or watercolor. If you want to have an authentically atomic DNA tattoo consider getting an Everence tattoo, which incorporates actual DNA into the tattoo ink. 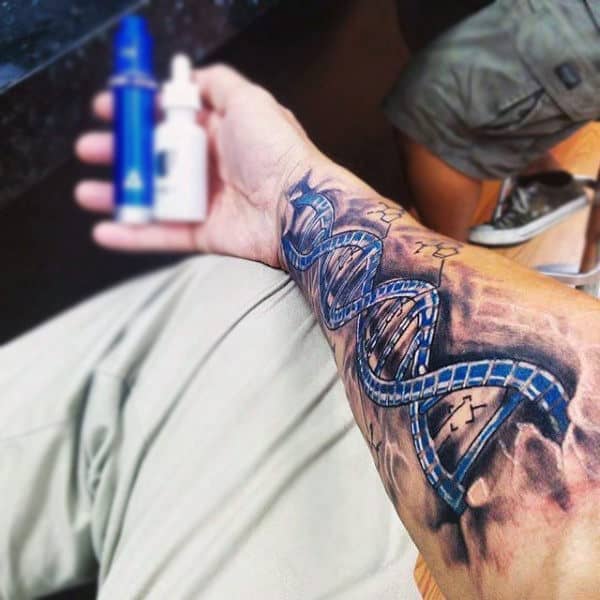 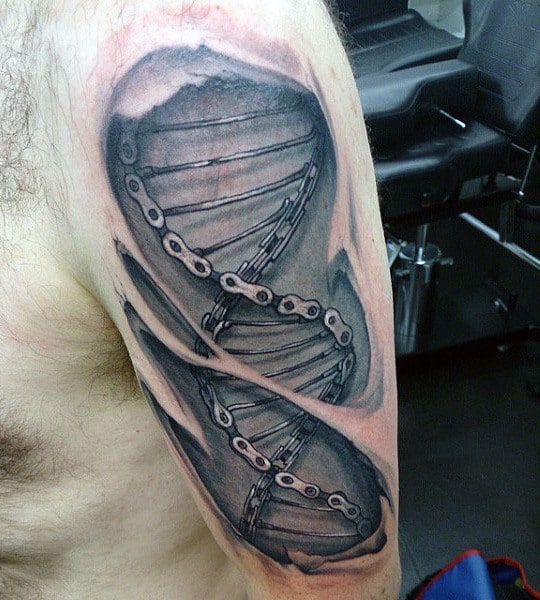 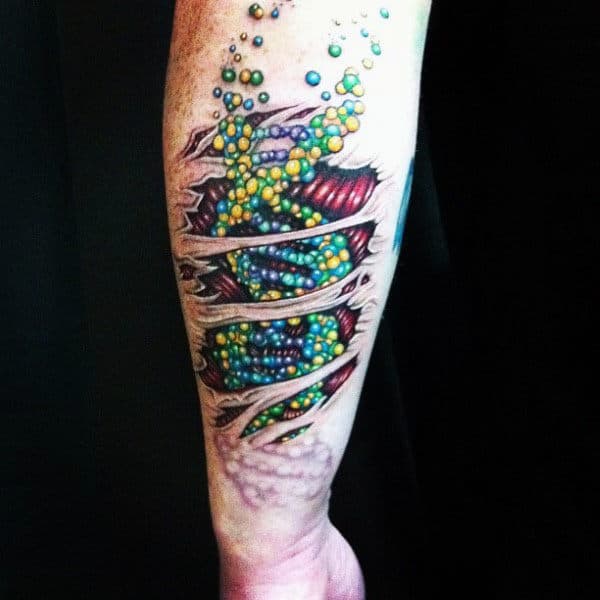 You may have encountered torn skin tattoos before, but pairing it with DNA takes it to microscopic levels. A torn skin DNA tattoo uses negative space to convey skin that is coming apart at the seams to reveal the fundamental building blocks of DNA underneath. The third piece really takes the detail of the piece to another level with the muscles and the shadows of the DNA bulging underneath.

Roller chains are also a popular design choice for DNA helixes, and you can combine this with the torn skin like in the second piece shown. Or for a more deconstructive vibe, you can have the skin crumbling rather than tearing like the first piece. I like the subtlety of that one, but the three-dimensional effect of flesh is a great look no matter what. 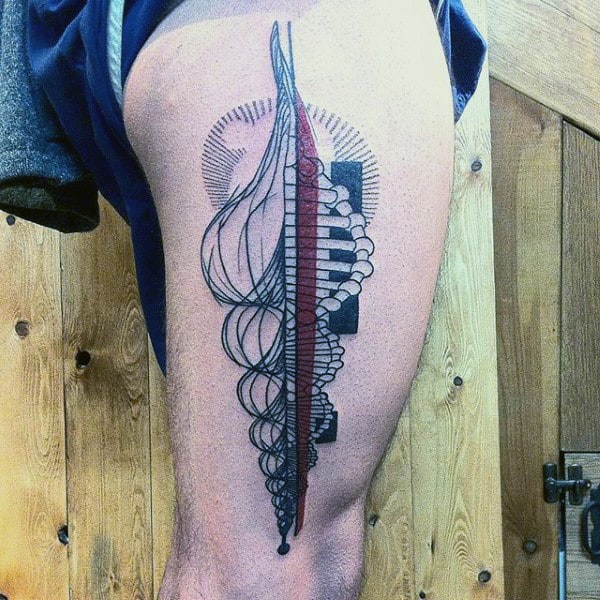 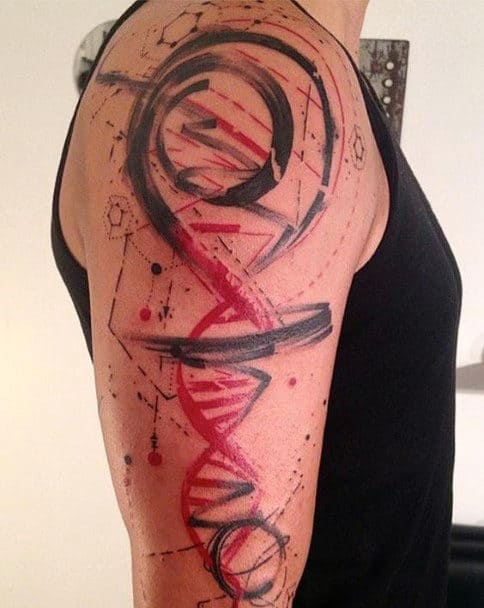 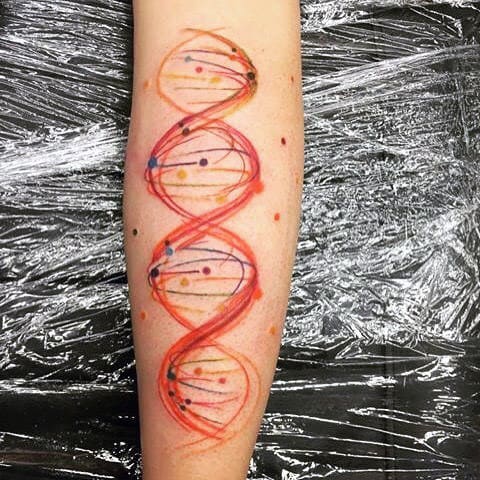 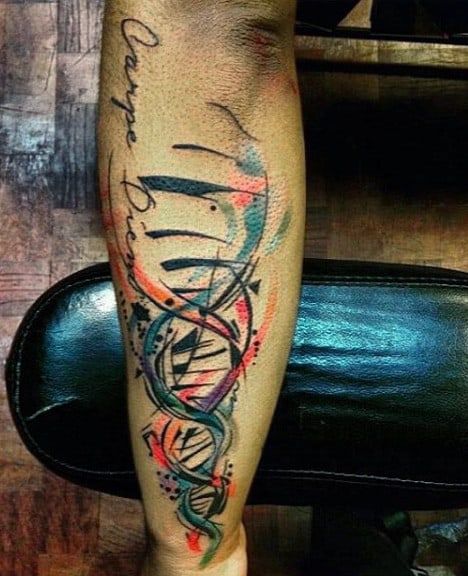 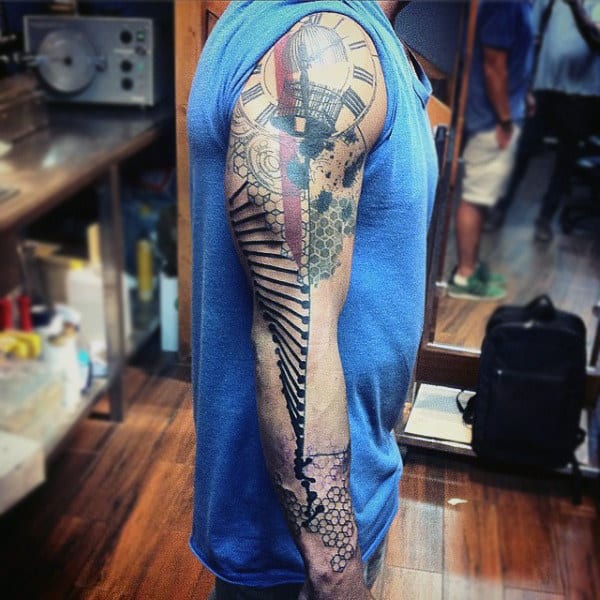 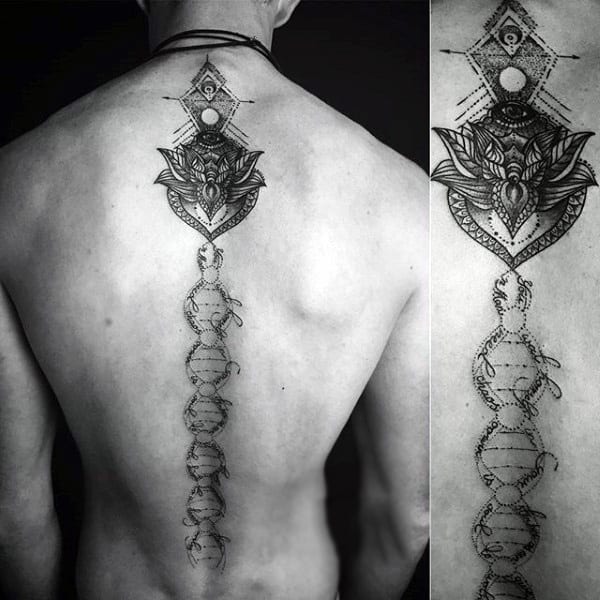 The beauty of DNA doesn’t have to be literally depicted. For a more artistic or covert nod to the marvels of nature, talk to your artist about abstract DNA tattoos. With a watercolor style your tattoo may even resemble works of modern art. Or try a full sleeve like the fifth piece shown, which hovers between a ladder to time and geometric patterns with an abstract DNA tattoo in between.

The final abstract DNA back tattoo is also a great spin on DNA, using the winds of the helix to spell out parallel messages. The versatile shape of a DNA helix also offers a myriad of interpretations. I really like the first piece especially with its garlic-like mirroring.

What is a DNA tattoo?

DNA stands for Deoxyribonucleic acid and a molecule in the shape of a double helix. A DNA tattoo is a tattoo that celebrates the building blocks of life, since DNA is considered to contain the genetic code that creates an organism.

What is an Everence tattoo?

An Everence tattoo is a tattoo that contains a sample of someone’s DNA within the ink of the tattoo. A customer will send in a sample of the DNA (hair, ashes, cheek swab), Everence will extract the DNA and enclose it in a medical-grad polymer, and returns it to the customer to be used in a tattoo.

Did you enjoy these DNA tattoos? Check out our galleries featuring other scientific inspired ink: